Initially delineated as a quartzite klippe (Taylor, 1979), the Hutte Sauvage Group was defined as a formal lithostratigraphic unit by van der Leeden (1994) in the Hutte Sauvage Lake area from which it is named. This unit was elevated to group rank due to metamorphic recrystallization (lower amphibolite facies) and deformation that were not sufficient to destroy sedimentary structures of >2 mm, or to substantially alter the form of conglomerate fragments. A basin and sedimentation environment analysis could therefore be conducted as part of an in-depth study (Girard, 1992).

Jackson and Taylor (1972) considered the rocks now assigned to the Hutte Sauvage Group to be part of the Aphebian supracrustal cover associated with the Lake Harbour Group, defined on Baffin Island in the Northwest Territories. Van der Leeden (1994) mentions that this correlation seems premature given the distance between the two units. Subsequent mapping and checks conducted as part of the Southeastern Churchill Province synthesis(Lafrance et al., 2018) indicate that rocks of the Hutte Sauvage Group are quite distinct from those of the Lake Harbour Group.

The Hutte Sauvage Group is a metamorphosed assemblage of sandy rocks that has been divided into four informal subunits by van der Leeden (1994): 1) meta-arkose; 2) conglomeratic meta-arkose; 3) quartzitic meta-arenite; and 4) quartzitic metawacke. However, the author did not draw the contacts between units due to the gradual transition from one subunit to another and the mapping scale.

Van der Leeden (1994) was unable to establish the stratigraphic sequence of the Hutte Sauvage Group. The well-marked lithological dissymmetry suggests the presence of more than one sequence and lateral facies changes from east to west. The western portion of the unit consists mainly of meta-arenites and metaconglomerates with a marked presence of hematite. These rocks exhibit horizontal stratification, planar oblique and scallop stratification, laminations, channels, lag deposits and reversed crossbeds. 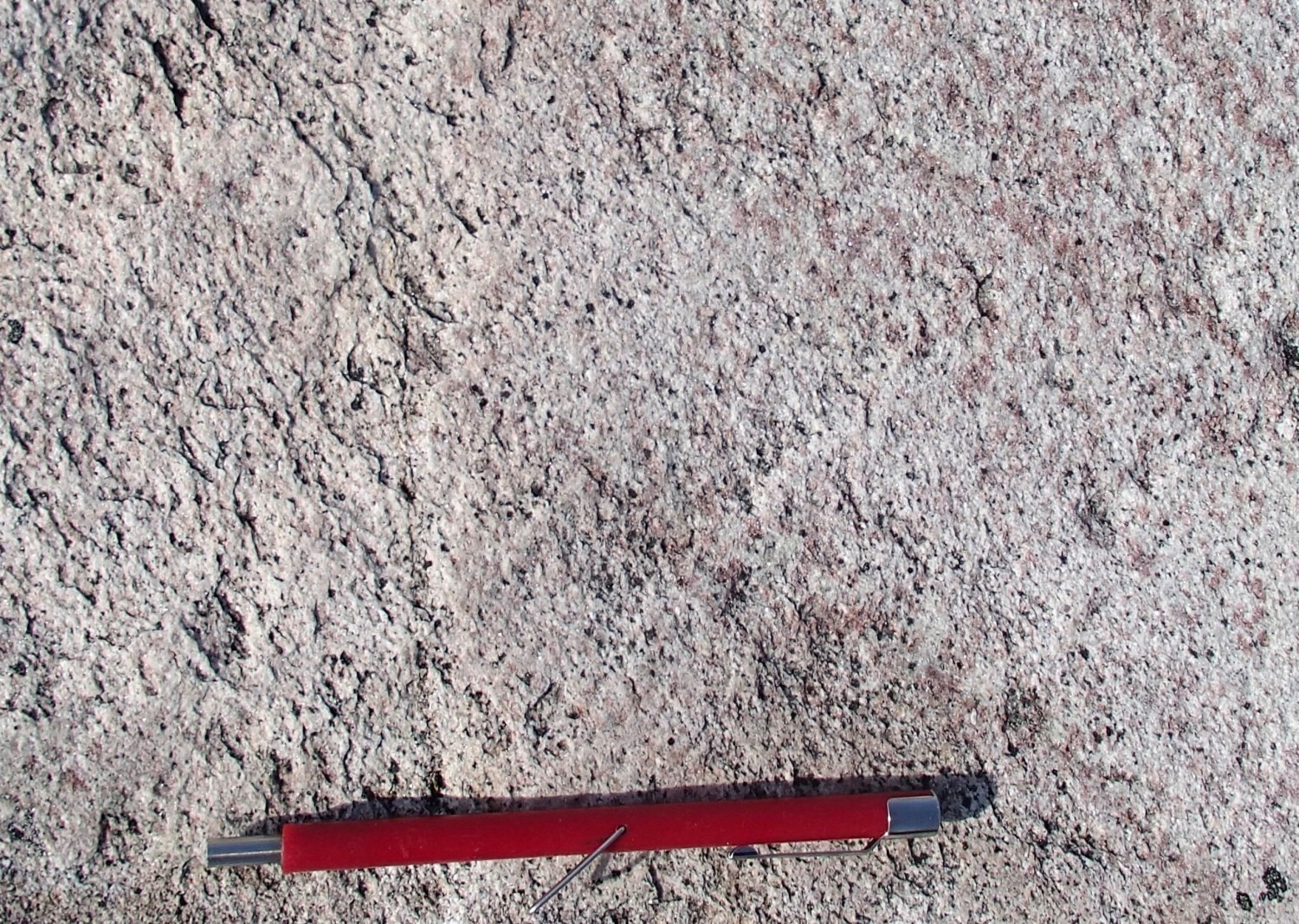 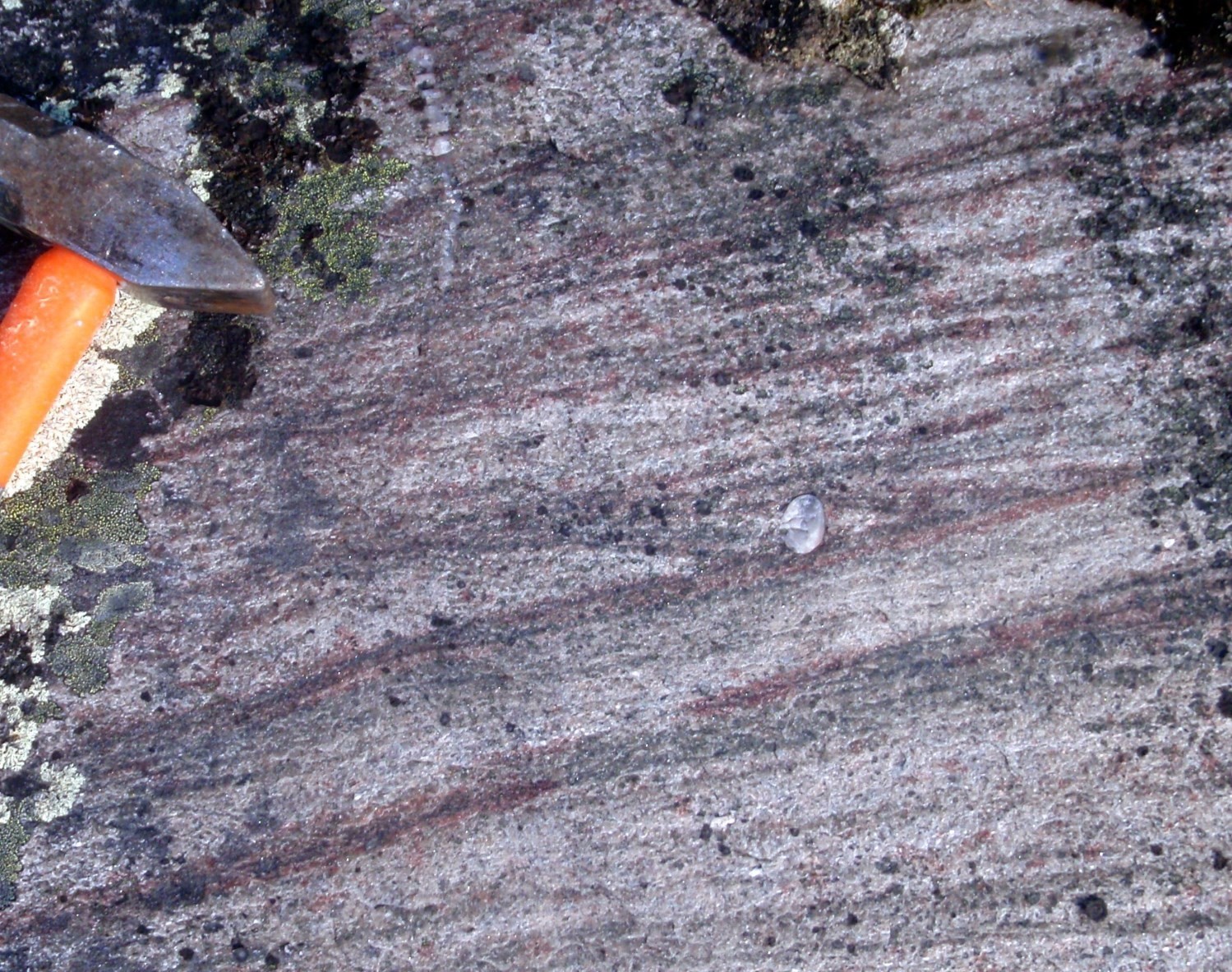 Meta-arkose (subunit D2a of van der Leeden, 1994) is white, pale pink, light yellowish green or grey, locally altered beige. The grain varies from medium to very fine sand. Conglomeratic varieties exist, however, apart from the presence of pebbles and blocks, grain recrystallization and deformation make it difficult to identify detrital grains. Orthose is more abundant than microcline. The yellowish-green colour of some meta-arkoses appears to be caused by a small amount of muscovite-sericite and epidote. Meta-arkose is locally spotted dark red due to the presence of hematite flakes up to 15 mm long and <0.1 mm thick. Some red quartz is hematite plated. Specularite (≤2%) is disseminated or concentrated in millimetric laminae. Conglomeratic meta-arkose beds contain some fragments of quartz (up to 5 cm in diameter) and white granitoid 3 mm to 30 cm by 1 to 15 cm. Some beds contain rare grey metasiltite pebbles.

The bedding thickness of meta-arkoses ranges from <1 mm to 35 cm. Laminations are composed of specularite aggregates. Beds are often uneven, continuous and of regular composition; others are channel-shaped, discontinuous and non-uniform. Oblique stratification is common, mainly in scallops, locally planar or tabular. Centimetre to decimetre-thick crossbeds are also observed. Reversed crossbeds, sorted beds, and erosion channels 1 to 2 m deep are described by van der Leeden (1994). Meta-arkose also contains 5-10% calcareous metasandstone. These rocks are white to light beige with a dark brown patina. The matrix is a medium to very coarse arkosic sand. The calcite cement easily alters, leaving pebbles in positive relief. These pebbles are mainly unidimensional, rounded to elongated fragments of white granitoids, quartz and, more locally, fine metavolanics or fine green metasedimentary rocks. The lateral and gradual transition from calcareous metasandstones to sandy marbles was observed locally. Marbles are pinkish white or pale beige, fine grained, massive to low-foliated and 10 to 30 cm thick. 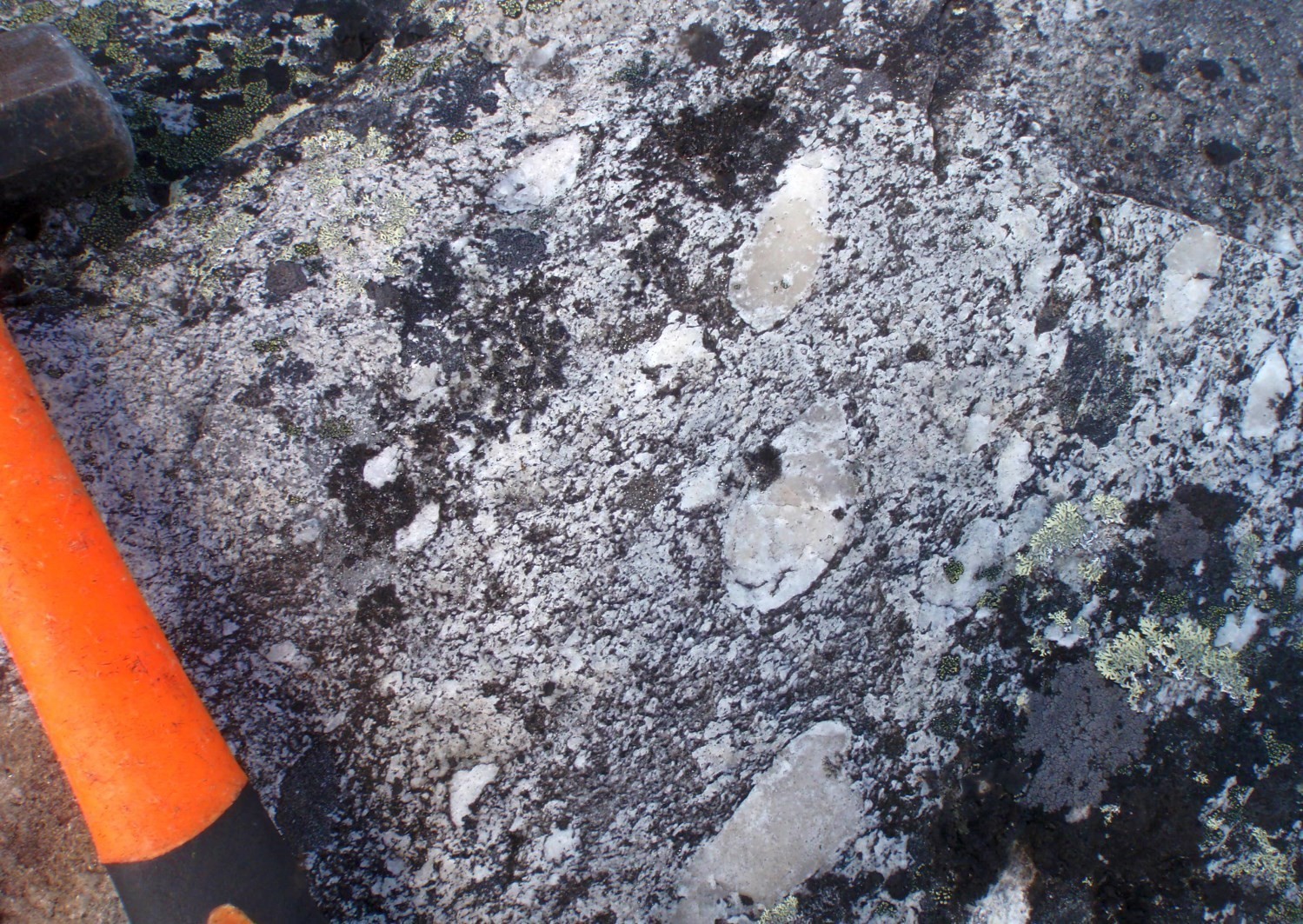 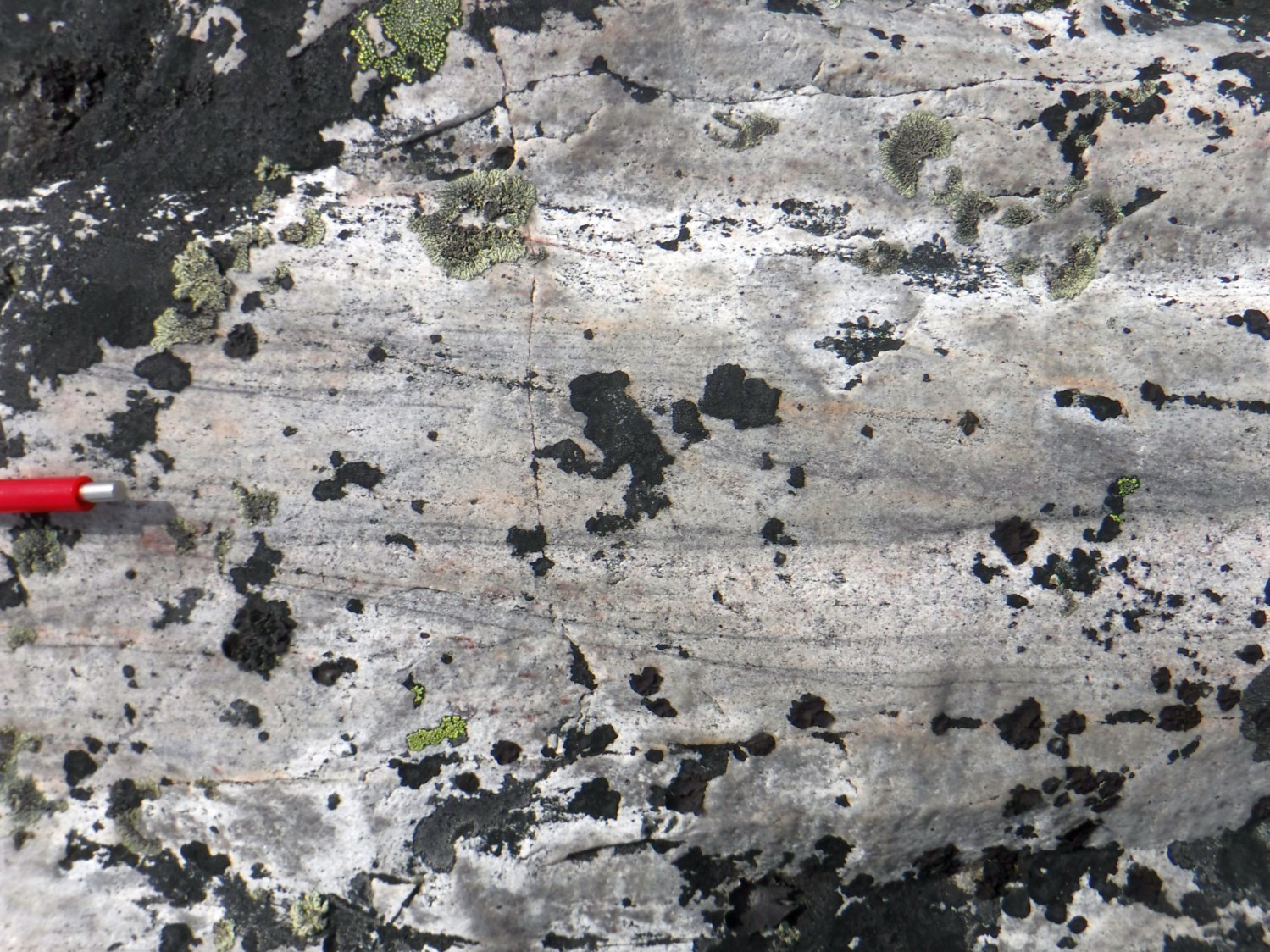 Finally, the quartzitic metawacke (D2d, van der Leeden, 1994) or quartz-muscovite schist subunit contains local specularite laminae and red muscovite ± hematite spots. Some of these rocks contain trace piemontite. There are fewer clasts, represented by small pebbles flattened in schistosity. They are mostly composed of quartz and quartz or microcline aggregates. Since deformation is more intense in this subunit, bedding is difficult to detect.

The Hutte Sauvage Group forms an N-S lens that is 46 km long by 7.5 km wide (276 km2), in the west-central part of the Mistinibi-Raude Domain (Charette et al., 2019). More specifically, it can be found in sheets 24A07 and 24A02. Meta-arkose mainly covers the western half of the regional lens. Conglomeratic meta-arkose forms a strip along the southern edge of the Hutte Sauvage Group and transitions to meta-arkose. Metawacke is the main facies in the eastern part of the unit. Conglomerate is concentrated in the SW part of the unit.

Analyses of 61 zircons yielded ages between 2570 Ma and 1978 Ma. Detrital ages are characterized by three dominant modes, around 2510 Ma, 2320 Ma and 2080 Ma (Corrigan et al., 2018). Further analysis of the youngest detrital zircon yielded an average age of 1987 Ma, interpreted as the maximum age of deposition. These ages indicate that the Hutte Sauvage group appears to derive from rocks of the Mistinibi-Raude Domain, with no significant contribution of adjacent lithotectonic domains.

Preliminary dating also indicated a detrital zircon population around 2321 Ma and a maximal sedimentation age of 1973 Ma. These results contradict the earlier interpretation of Girard (1992) that the Hutte Sauvage Group was partly derived from erosion of the De Pas Supersuite (1861-1805 Ma).

The contact between migmatized paragneiss of the Mistinibi Complex and metasedimentary rocks of the Hutte Sauvage Group shows an abrupt change in metamorphic facies. Rocks of the Hutte Sauvage Group escaped higher metamorphism of the surrounding rocks, indicating that they were formed later than this metamorphism; therefore, the initial contact surface corresponded to an angular discordance with respect to gneissosity of the adjacent basement. The Hutte Sauvage Group occupies a superior stratigraphic position with respect to the Mistinibi and Ntshuku complexes. The western contact with the Mistinibi Complex is mylonitized (Girard, 1992; van der Leeden, 1994). According to the authors, an outcrop would expose a fault contact indicating thrusting of the western block eastward.

Regionally, current direction indicators are variable. The overall decrease in size, quantity and variety of pebbles in conglomerate rocks from west to east is indicative of a western provenance of sediments. The presence of meta-arkose, polymictic metaconglomerates, and granitoid blocks and pebbles is generally considered to be an indicator of relatively rapid erosion and sedimentation. Significant concomitant uplift of crystalline bedrock is involved. Mylonites and faults immediately to the west of the Hutte Sauvage Group would, according to Girard (1992), attest to an intense tectonic activity that could have been contemporary to sedimentation of the unit. However, geochronological data tend to contradict this hypothesis (Charette et al., 2019).

Regionally, van der Leeden (1994) interprets this epicontinental silicoclastic pile as a double keel forming a regional syncline, locally overturned westward. Lithologies and structures are characteristic of an alluvial environment, with sedimentation in a braided river system (coarse facies deposits, low sinuosity rivers; Girard, 1992; van der Leeden, 1994). Such a system should have deposited its sediments close to their source.