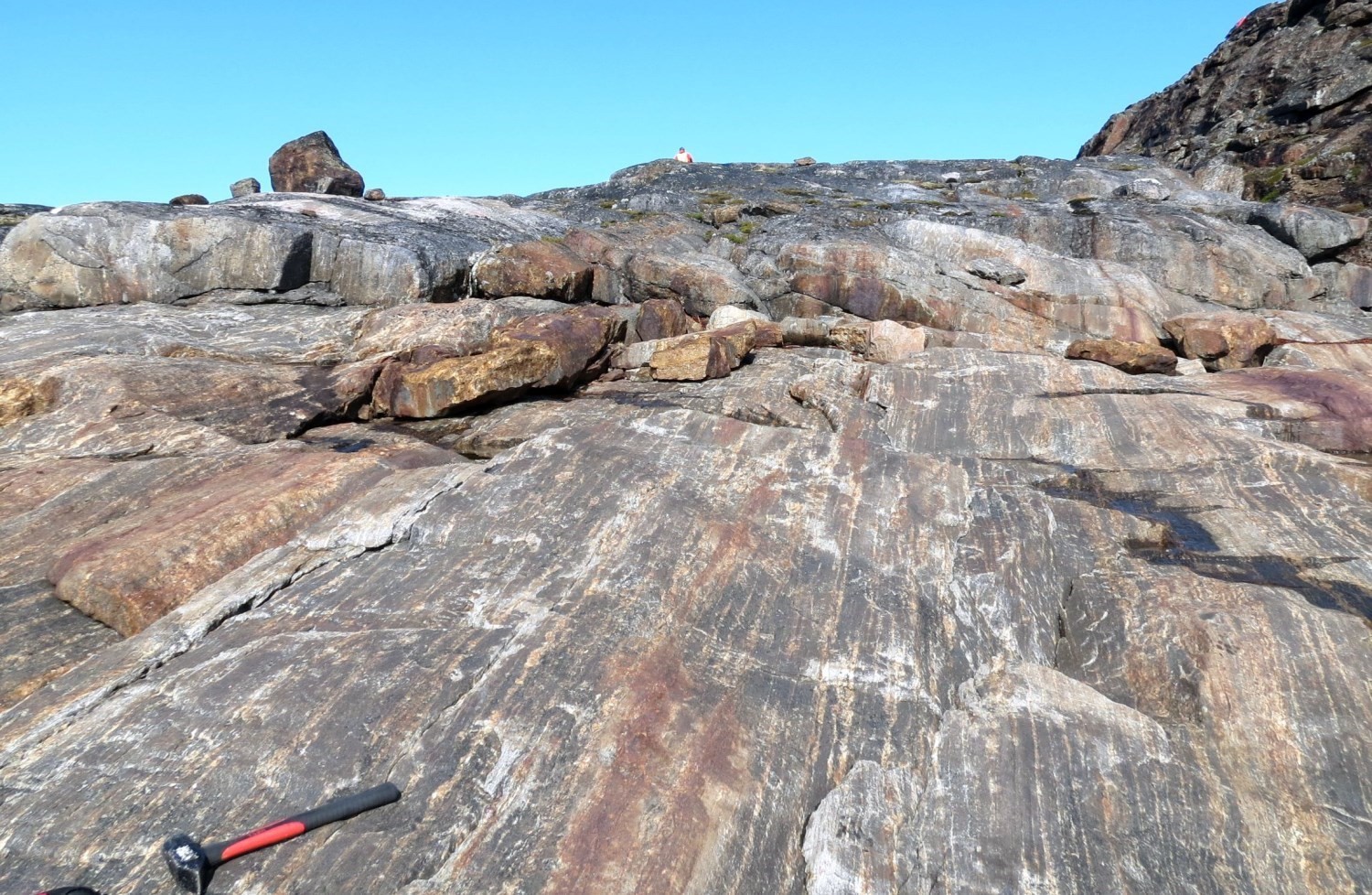 The Lake Harbour Group was introduced by Jackson and Taylor (1972) to designate a sequence of Paleoproterozoic volcano-sedimentary rocks located on Baffin Island, Nunavut, and northeastern Quebec and Labrador (“Dorset Fold Belt”). Taylor (1979) repeated the term, but reduced the unit to the rank of formation in order, in his view, to comply with the North American Stratigraphic Code at the time. Hoffman (1988) did, however, use the informal term “Koroc River sediments” while acknowledging its similarity to the Lake Harbour Group. For priority reasons, Verpaelst et al. (2000) and Simard et al. (2013) maintained the term Lake Harbour Group in the Koroc River and Kuujjuaq areas. Although the correlation with Baffin Island units remains uncertain, Lafrance et al. (2015, 2016) and Mathieu et al. (2018) also assigned volcano-sedimentary rock sequences located in the eastern part of the Core Zone to the Lake Harbour Group to provide some continuity with the units recognized further north.

The degree of metamorphism in rocks of the Lake Harbour Group in southeastern Churchill Province (SECP), including the loss of primary structures, makes use of the term group inappropriate. Since this is a well-established name in the literature, the term Lake Harbour Group has been maintained. However, the unit is classified as a complex as it combines rocks of different genetic classes.

The Lake Harbour Group consists of four units: 1) a paragneiss unit (pPhb1); 2) a quartzite unit (pPhb2); 3) a calcosilicate rock and marble unit (pPhb3); and 4) an amphibolite unit (pPhb4). In the Koroc River area, Verpaelst et al. (2000) describe a sedimentary sequence with apparent thickness of the order of one kilometer. Stratigraphic boundaries are not exposed and sedimentary polarity remains uncertain. The lower contact, observed near the Baudan River, is a ductile shear zone or even a decollement zone. However, the marble at the « base » of the sequence at this location may be a more ductile horizon in which deformation has been concentrated. Elsewhere, the lower contact is a fault in a ductile shear zone. The upper contact was not observed. In several places, pink pegmatite is found ranging from one to three metres thick in contact with Archean gneiss and marbles.

The Lake Harbour Group is characterized by the development of amphibolite facies metamorphic assemblages and by evidence of more or less advanced partial melting. It has a biotite-plagioclase-K- feldspar-quartz-garnet-sillimanite-muscovite-amphibole paragenesis. The degree of partial melting is also highly variable, ranging from paragneiss containing 2 to 30% leucosome to stromatic metatexite, to ultrametamorphic granite. The presence of leucosome indicates that metamorphic conditions reached exceeded the melting conditions resulting from dehydration of mica. Likewise, the presence of sillimanite shows that the stability field of this mineral has been reached. These observations suggest an amphibolite facies metamorphism corroborated by the geothermobarometric calculations of Charette (2016) in the Henrietta Lake area, and indicate P-T conditions of 5.8 kbar at 645°C and 6.5 kbar at 771°C in the Lake Harbour Group metasediments. 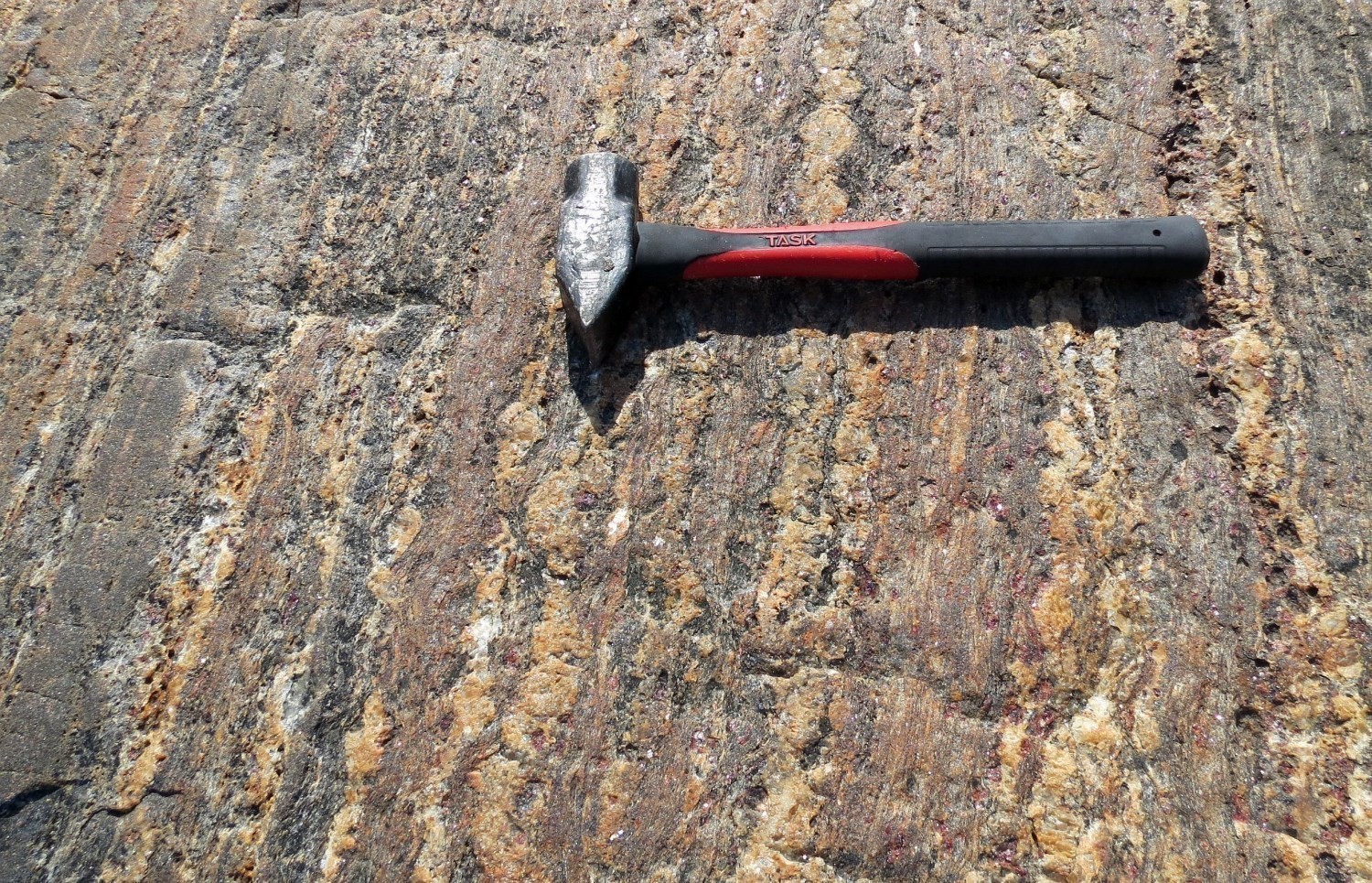 Paragneiss is the predominant unit of the Lake Harbour Group. It usually has a banded or stromatic texture materialised by the presence of 5 to 25% millimetric to centimetric white leucosome bands. The rock composition varies depending on the amount of K-feldspar (1-30%), quartz (5-30%) and mafic minerals (biotite and garnet, 10-25%). Its colour varies from medium grey to dark grey in fresh exposure with a distinctive rusty brown or brownish patina. Paragneiss is fine to medium grained, well foliated and has a well developed granoblastic texture. Biotite and garnet are locally associated with sillimanite. Garnet occurs as small disseminated grains or as centimetric poikiloblasts containing inclusions of other minerals observed in the paragneiss. Sillimanite occurs in several forms: 1) small disseminated prisms; 2) fibrous, associated with mica (muscovite and biotite); 3) millimetric to centimetric nodules; and 4) flexuous clusters surrounding feldspar phenocrystals. Muscovite, cordierite, zircon, apatite, epidote, graphite, allanite, tourmaline, magnetite, rutile and sulphides are the most common secondary minerals. 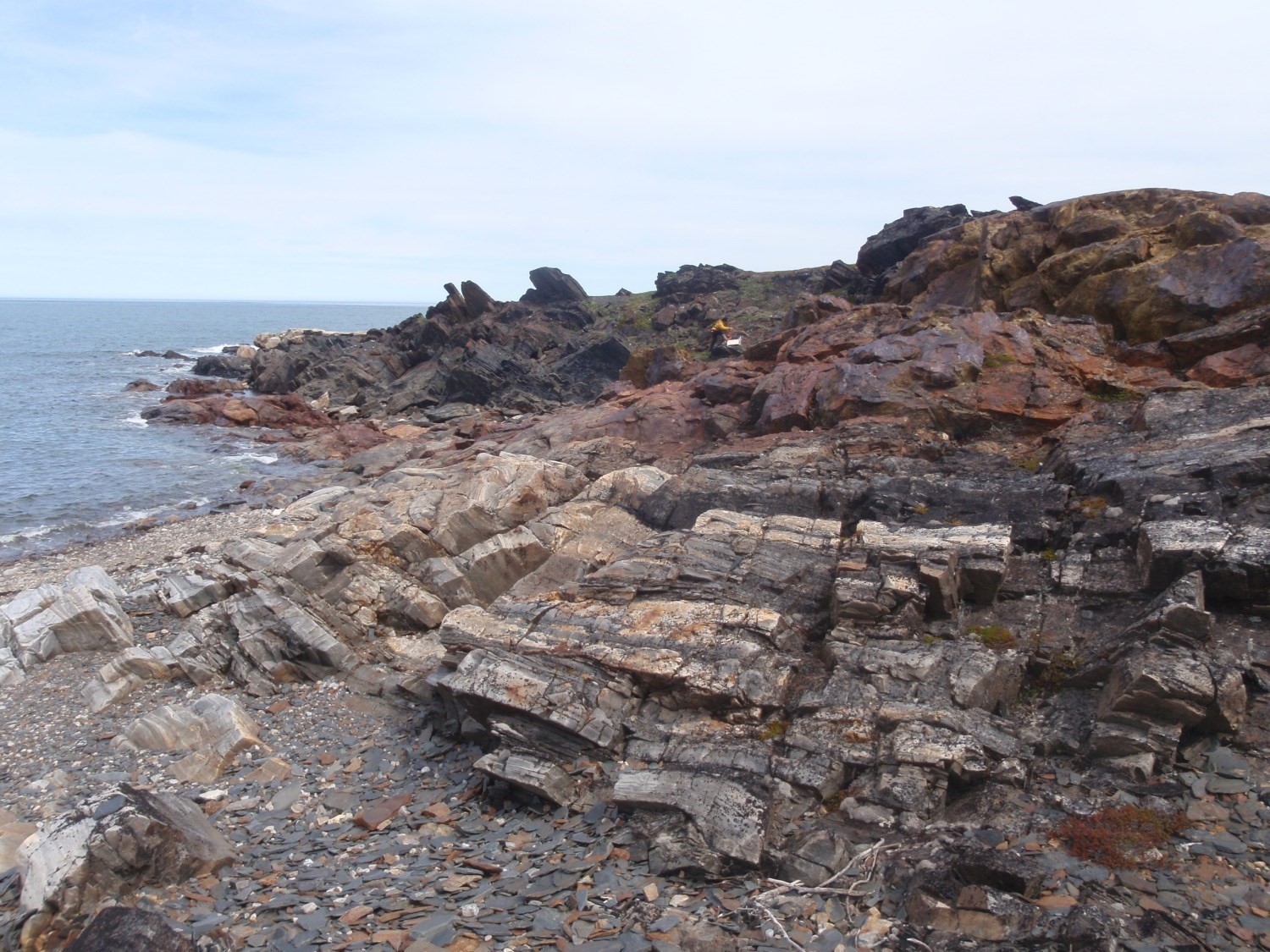 In the Falcoz Shear Zone, paragneiss shows a well-defined quartz band protomylonitic texture. In outcrop, there are many decimetre to decametre-wide rusted zones, as well as paragneiss horizons that have undergone severe surface alterations and where the rock is reduced to sand. In these horizons, paragneiss is rich in K-feldspar and contains 5 to 20% graphite. More locally, orthopyroxene is observed in paragneiss. The latter then takes on a brown sugar alteration colour characteristic of orthopyroxene rocks. In these rocks, biotite (2-8%) is dark brown, almost reddish, indicating high temperature biotite. There is also green hornblende (3-7%), garnet (5-15%) and augite (<5%).

Decimetric to decametric horizons of impure quartzite, calcosilicate rocks and amphibolite are interbedded in the pPhb1 paragneiss. Grenatites were also observed on three outcrops in the Koroc River area. Two of them contain diopside and sphene with or without calcite, plagioclase, epidote, magnetite and sulphides. The third outcrop, located in the Falcoz Shear Zone, also contains quartz, apatite, sulphides, red biotite, magnetite, monazite and harrisonite. 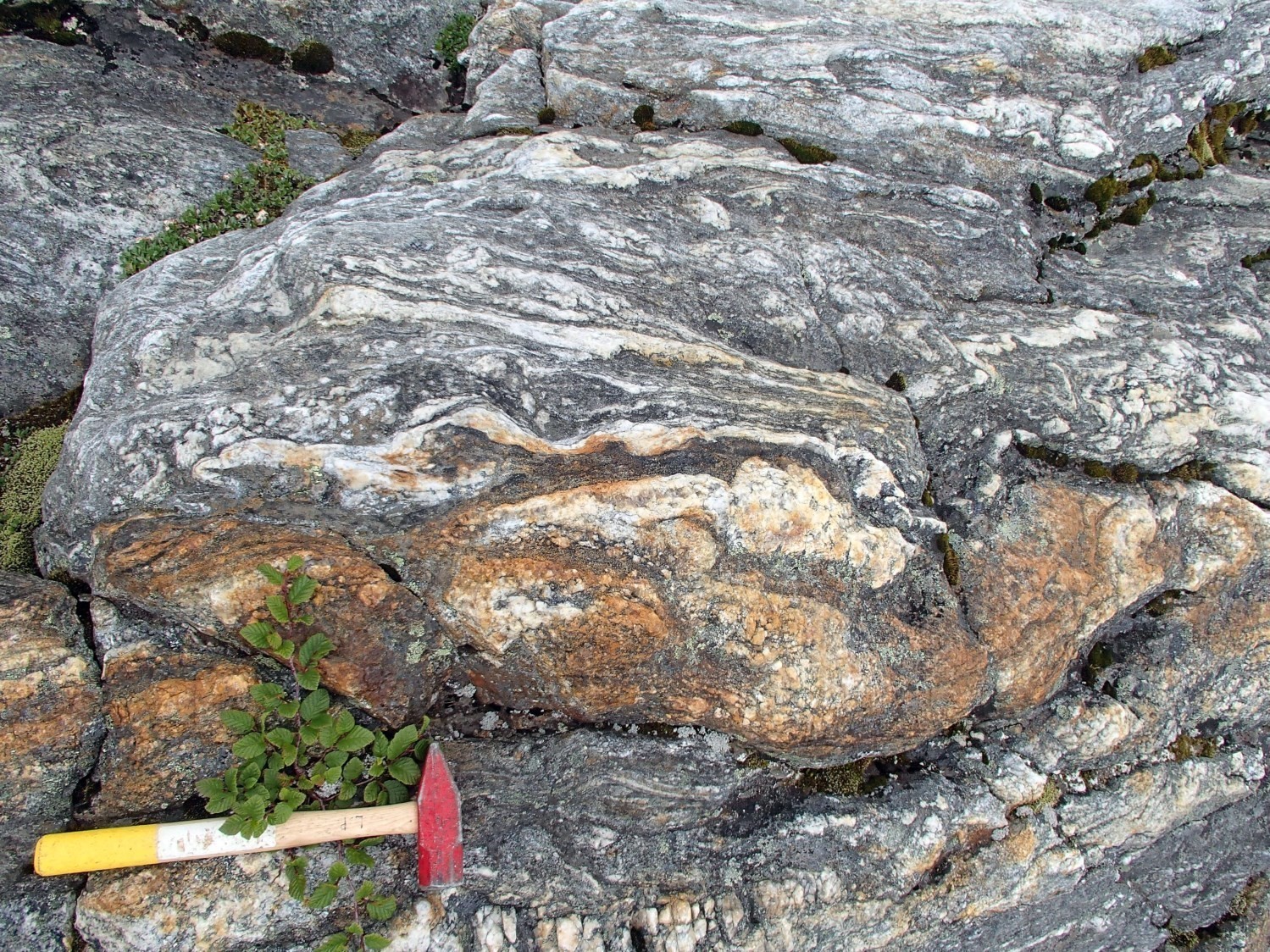 In some areas, the more important melting of paragneiss resulted in diatexites assigned to subunit pPhb1a. These diatexites contain 40 to 65% mobilisate in the form of millimetric to centimetric whitish bands. In outcrop, there are numerous zones of leucosome accumulation, as well as enclaves and decimatric to metric horizons of preserved paragneiss. Diatexite is heterogranular, grey in altered surface and brownish white in fresh exposure. Its composition is variable due to unequal distribution of K-feldspar (0-20%) in the rock. It contains 10 to 20% brown to red biotite forming schlierens that mould quartzofeldspathic clusters or zones. Biotite is regularly associated with muscovite flakes and, more locally, sillimanite. The main accessory minerals are garnet (<5%), sphene, hornblende, apatite, zircon, allanite, epidote and graphite. 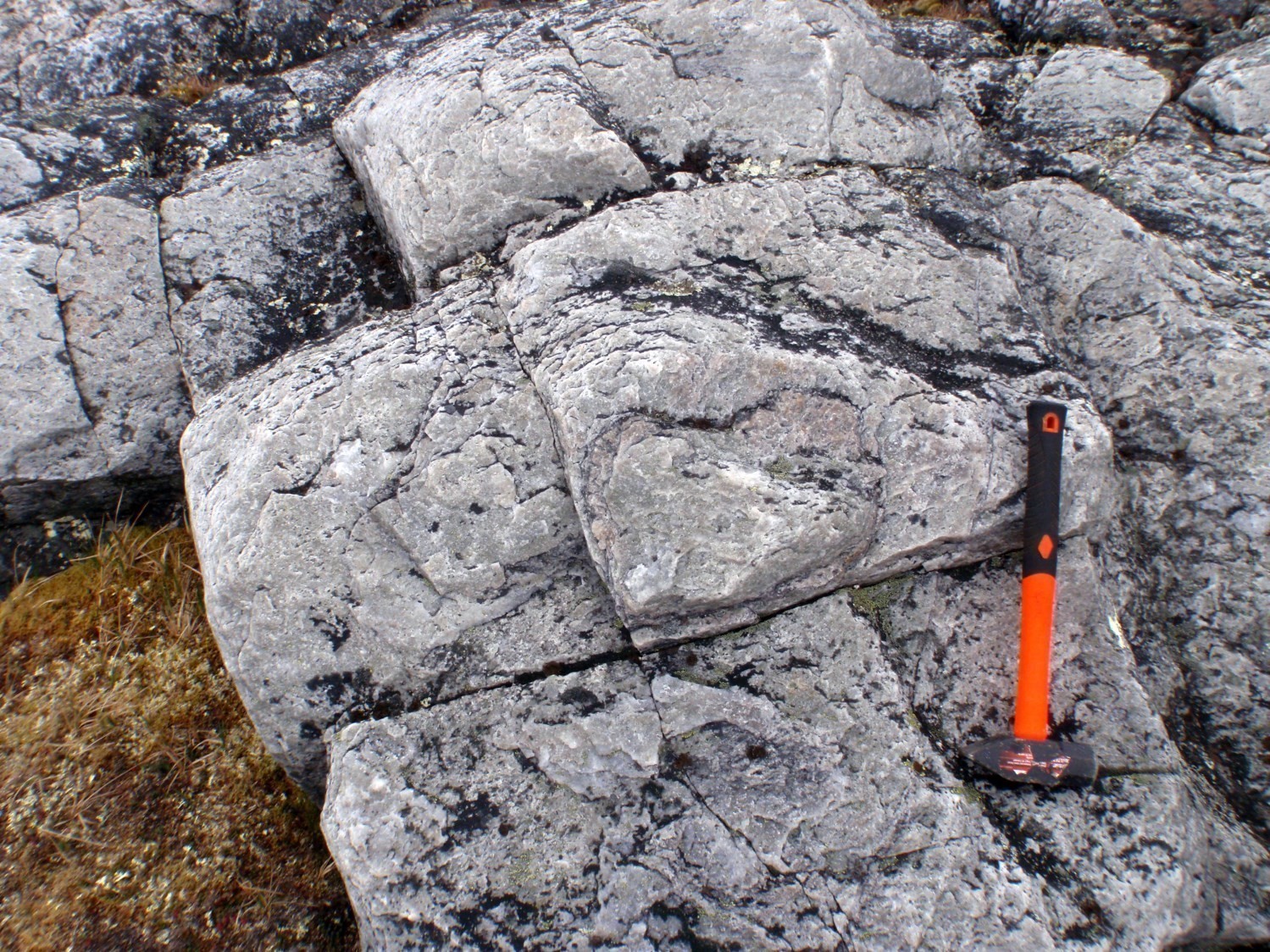 Quarzite is predominantly present in the Barnouin River area, where it is, according to Verpaelst et al. (2000), the apparent summit of the group. It is also found, in smaller quantities, interbedded in paragneiss of unit pPhb1. It is composed of 75 to 95% more fine-grained﻿ recrystallized quartz or forming large indented, lenticular or banded zones. It is grey-white in altered surface and white in fresh exposure. It contains 2 to 5% muscovite and approximately 2% locally chloritized biotite. Micaceous minerals locally give a lepidoblastic texture to the rock, especially evident in thin section, but which can give the quartzite a banded appearance. The unit is cut by quartz veins and veinlets.

Impure quartzite horizons contain up to 10% K-feldspar or plagioclase, as well as laminae rich in muscovite, sillimanite or graphite. Sillimanite occurs as flexuous clusters of fine needles. Biotite (<12%), brown to green and with zircon inclusions, garnet (<2%) and tourmaline are also regularly observed. Accessory minerals are apatite, clinopyroxene, zircon, graphite, magnetite and sulphides. In several areas, particularly near ultramafic sills of the Nuvulialuk Suite (pPnuv), quartzite contains pyrite and graphite mineralization (5-25%), disseminated and as laminae. 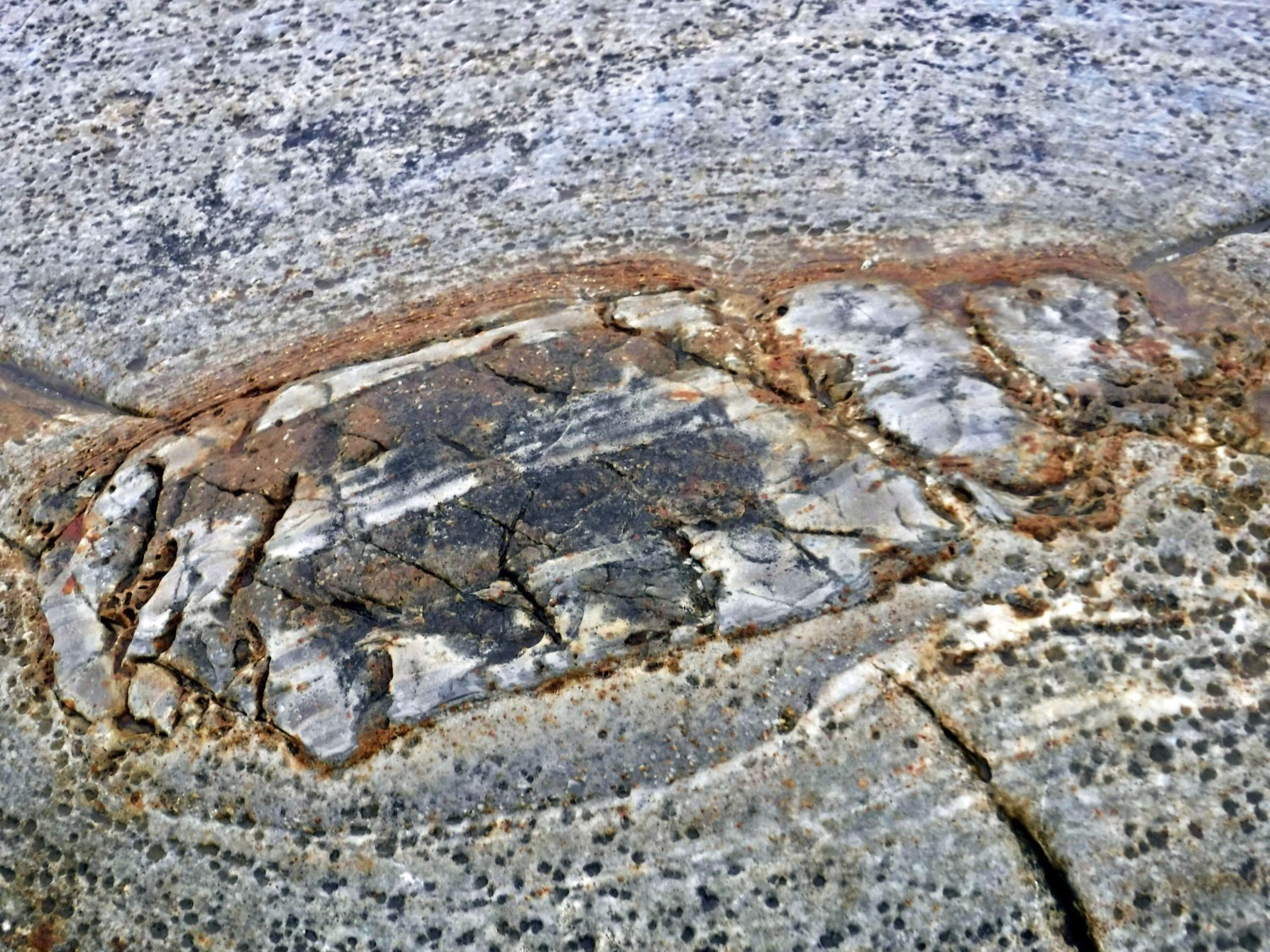 Calcosilicate rocks and marbles are often located in contact between Archean gneiss and paragneiss. Since many of these contacts are tectonic, it is possible that these lithologies acted as ductile materials that facilitated movement on shear zones. They may also represent altration zones near NE-SW fault zones. Moreover, these rocks contain millimetric quartz bands, indicating a protomylonitic fabric, and regularly form centimetre to metre-long boudins in the different units of the Lake Harbour Group. In this case, reaction rims are observed around the boudins. 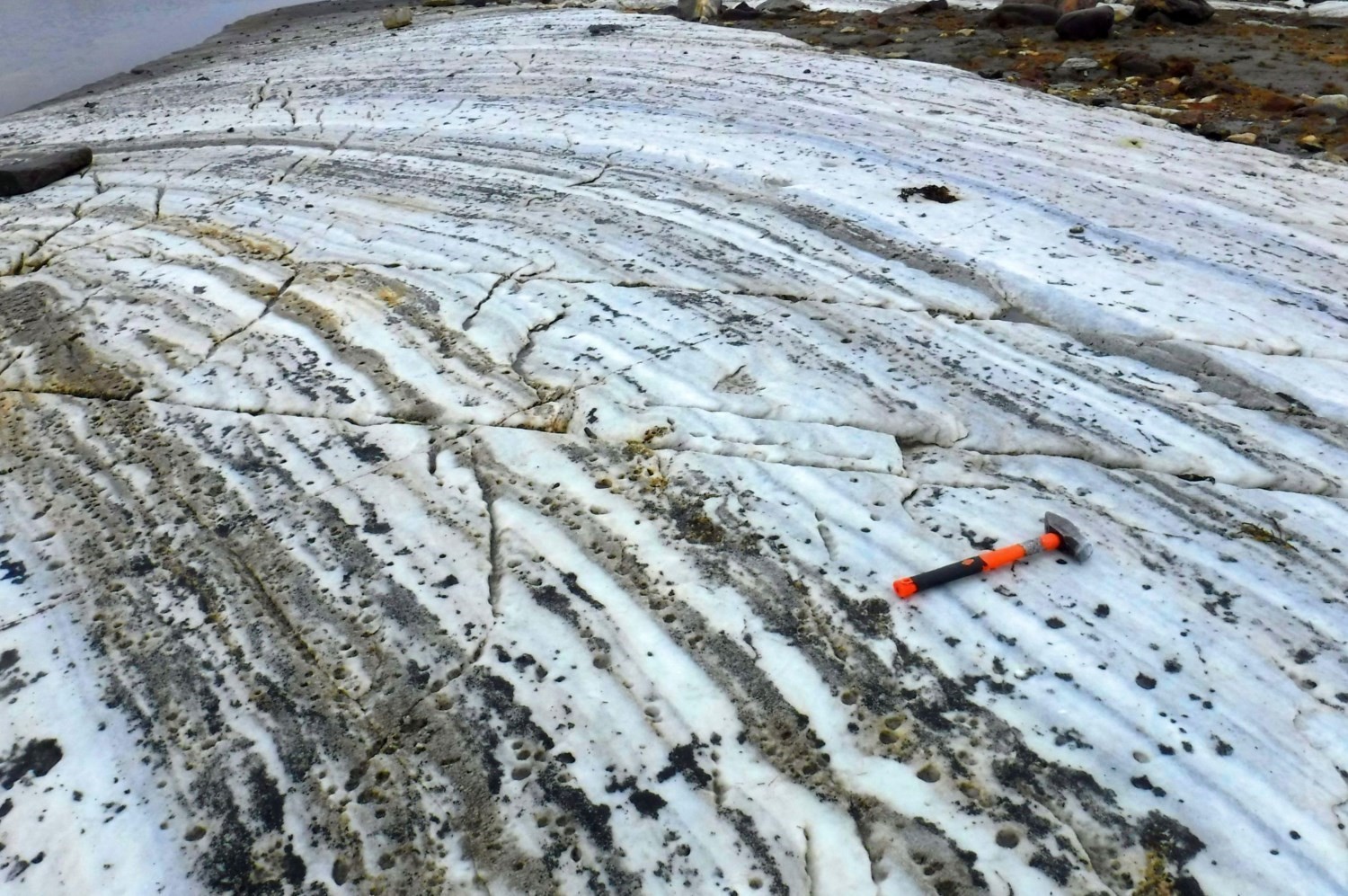 According to Verpaelst et al. (2000), marble forms thin sequences, usually at the base of the Lake Harbour Group. Most of it is calcitic, although dolomitic marble is also found. It is often interbedded between horizons of paragneiss or more or less pure quartzite. Marble is medium to coarse grained, heavily deformed and granoblastic. It can be even grained or heterogranular and it is generally well foliated. During a low temperature deformation episode, mylonitization caused some marbles to reduce their grain size. Minerals observed are carbonates, phlogopite, tremolite, olivine, diopside and scapolite. Olivine is variably altered to serpentine and iddingsite; some crystals are partly replaced by chondrodite. Marble also contains a wide variety of accessory minerals such as sulphides, apatite, graphite, sphene, garnet, epidote, zircon, tourmaline, quartz and feldspar.

Calcosilicate rocks are generally associated with marbles and have roughly the same pattern of occurrence in the field. Their mineralogy is varied and shows alternating composition in the form of bands or millimetric to decimetric clusters. They are fine to medium grained with a light greenish colour. In addition to carbonates, diopside, tremolite, epidote, scapolite, plagioclase, quartz and sphene are the common minerals of these rocks. Hornblende, apatite, olivine, phlogopite, garnet, muscovite, spinelle, chlorite, zircon and allanite may also be present locally. Olivine is coronitic (clinopyroxene crown) and usually serpentinized. 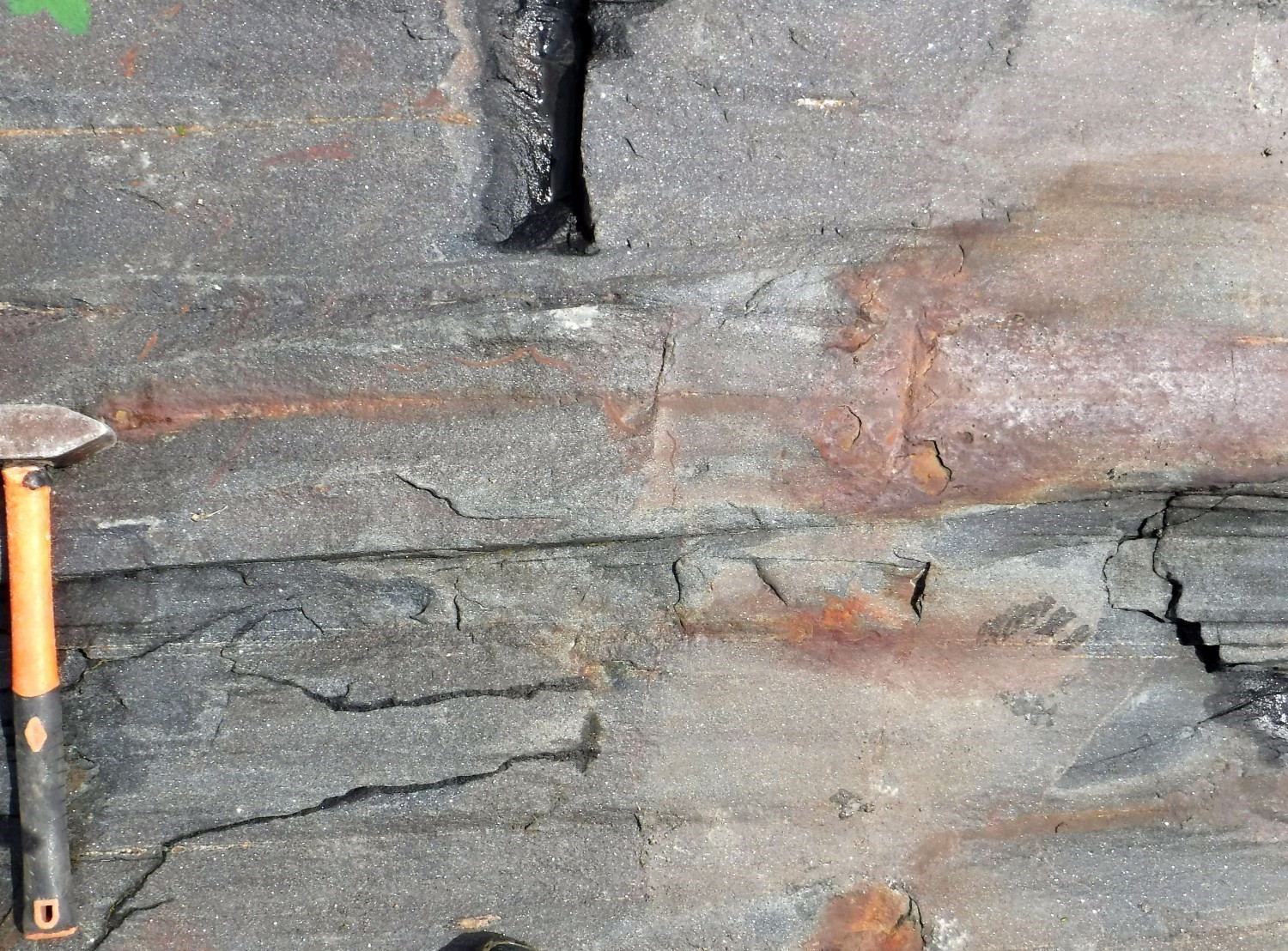 Amphibolite is interbedded with other units of the Lake Harbour Group, primarily paragneiss and quartzite. Unit pPhb4 is fine-grained or aphanitic, granoblastic, banded and dark grey-green to black. In the Koroc River area (Verpaelst et al., 2000), basalt-derived amphibolite forms large, massive, pillow or breccia flows. However, it is too deformed for polarities to be determined. Its actual thickness is also difficult to assess due to significant deformation. Amphibolite contains 45 to 65% mafic minerals, consisting of green hornblende (40-50%), clinopyroxene (2-20%) and brown biotite (2-10%). Quartz (<3%), sphene, sulphides, magnetite, chlorite, apatite, garnet and actinolite are the main accessory minerals. Hornblende is biotitized locally. Epidote appears as a plagioclase and mafic mineral alteration mineral. Quartz is interstitial or occurs as globules in hornblende. Locally, garnet can account for up to 35% of amphibolite.

The Lake Harbour Group forms sequences from a few km to nearly 30 km wide in the eastern part of the Core Zone between the Moonbase Shear Zone and the Blumath Deformation Corridor. The most important sequences are in the Koroc River area (sheet 24I). Paragneiss (pPhb1) is the dominant unit but quartzite (pPhb2) can also represent sequences greater than 10 km wide. The most important horizons of calcosilicate rocks and marbles (pPhb3) are in the Keglo Bay (sheet 24P04) and Abrat River (sheet 24P03) area, where they reach a few kilometres of apparent width. The amphibolite unit (pPhb4) is smaller but still includes two klippes approximately 3 km by 10 km in the Naksaluk Creek (sheet 24I11) and Laforme Lake (sheet 24H15) areas.

On Baffin Island, dates obtained from detrital zircons of the Lake Harbour Group impose a sediment deposition age younger than 1934 ±2 Ma (Scott and Gauthier, 1996). According to the work of Charette (2016), about 10 fractured zircon cores gave heritage ages between 2597 and 2019 Ma (13IL3008). Finally, analysis of sulphur isotopes from two paragneiss samples also indicates that they are derived from a Proterozoic protolith (Wing et al., 2012). Charette’s work (2016) noted that rocks of the Lake Harbour Group were largely re-equilibrated under metamorphic conditions consistent with the hydrated solidus during crystallization of anatectic liquids approximately between 1825 and 1812 Ma.

Metamorphosed volcano-sedimentary rocks of the Lake Harbour Group unconformably overlie gneissic Archean basement. However, the contacts observed today are tectonic in nature and can be obliterated by the partial melting that affected all these rocks in the Paleoproterozoic as well as by the presence of late granite and pegmatite intrusions. Paragneiss and quartzite of the Lake Harbour Group are cut by mafic and ultramafic sills and dykes of the Nuvulialuk Suite (pPnuv).