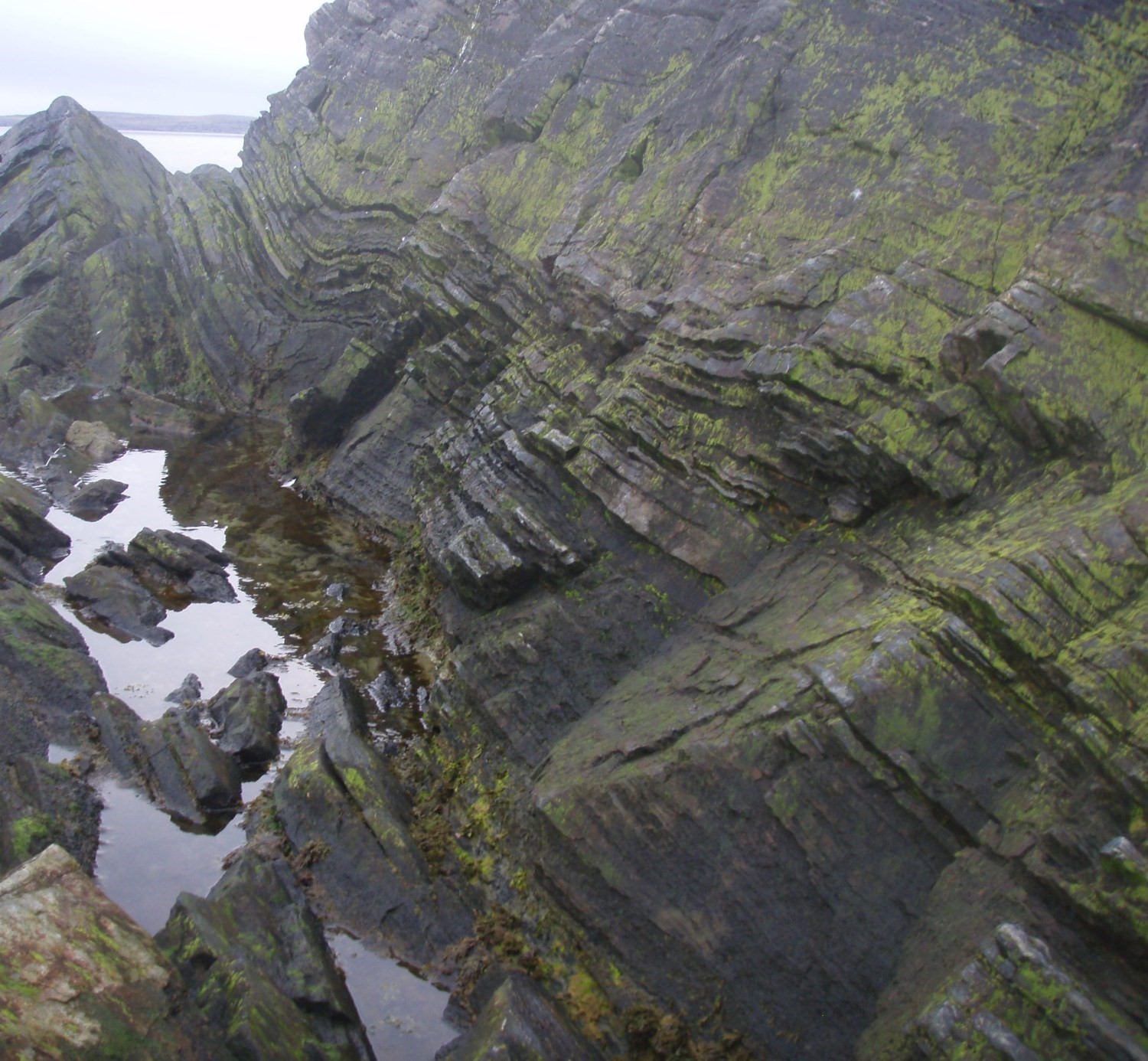 The term Wishart Quartzite was introduced by the Labrador Mining and Exploration Company (1949, in Frarey and Duffell, 1964). The name Wishart Formation was formally proposed by Harrison (1952). The application of the name was extended by Rivers (1980) south of the Labrador Trough on the Newfoundland and Labrador side, where it replaced the term Carol Formation (Gastil and Knowles, 1960) which was discontinued.

The Wishart Formation is a sedimentary unit found in all autochtonous, parautochtonous and allochtonous zones of the Labrador Trough, with the exception of the Howse Zone (Clark and Wares, 2004). It consists mainly of quartz arenite and smaller proportions of subarkose. More locally, it contains wacke, siltite, mudrock, dolomitic sandstone, dolomite, quartzite, micaceous schist and conglomerate. 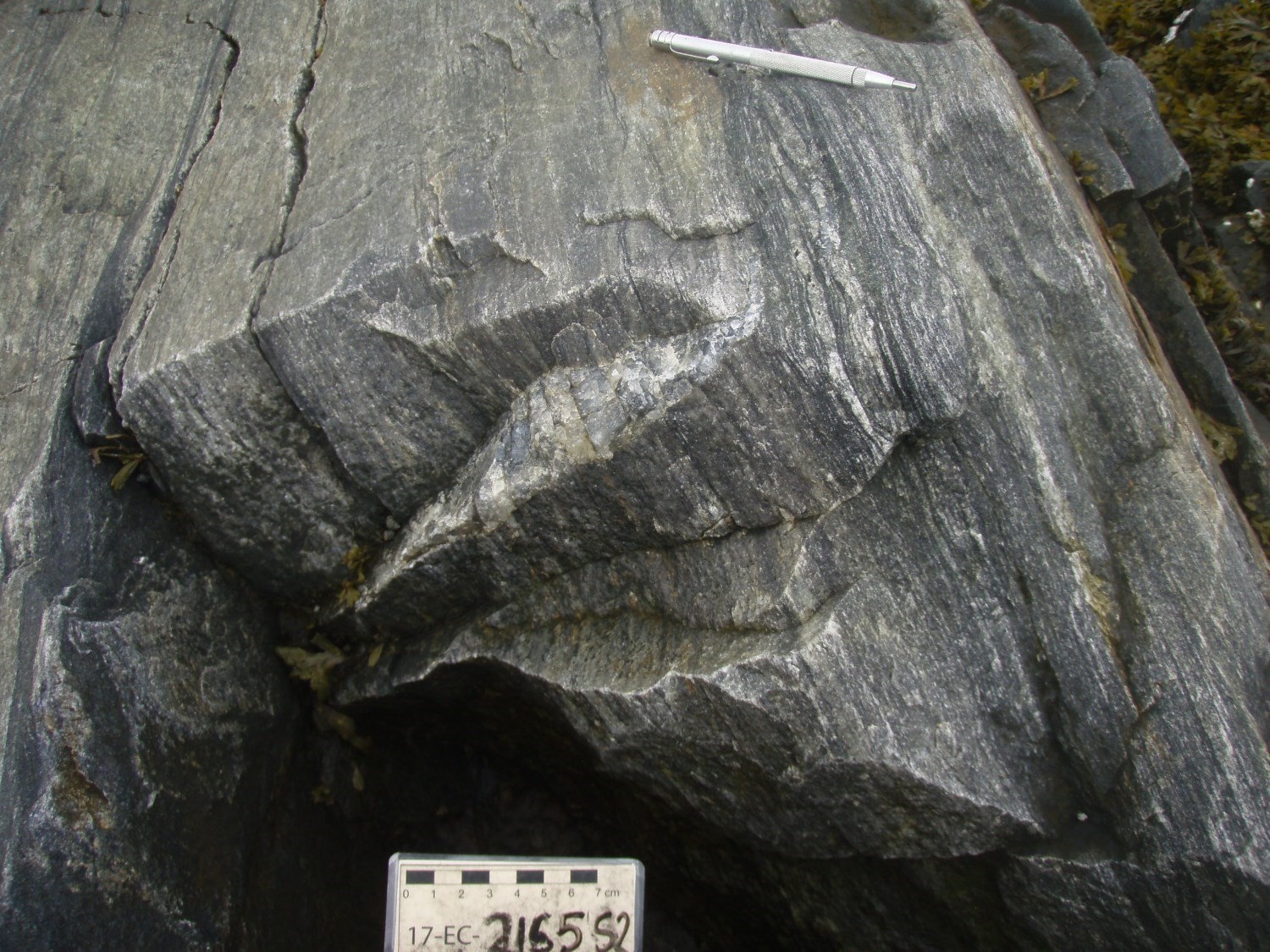 Quartz arenite is usually grey or white and more locally greenish grey. It is fine to medium-grained and commonly saccharoidal in appearance. It has a massive or bedded structure and in some places has sedimentary structures such as cross-bedding and current ripples (Harrisson, 1952; Dressler, 1973; Dimroth, 1972). In the Willbob and Griffis lakes area, the base and locally the top of the formation show bedded structure (Harrison, 1952). It is composed of about 90-95 % well-rounded quartz grains and generally contain less than 5 % feldspar. Accessory minerals are muscovite, carbonate, stilpnomelane, hornblende, cummingtonite, magnetite and pyrite. Harrison (1952) also observed tourmaline and zircon as accessory mineral phase. Quartz arenite is generally cemented by clay, chert or dolomite matrices (Dimroth, 1972). 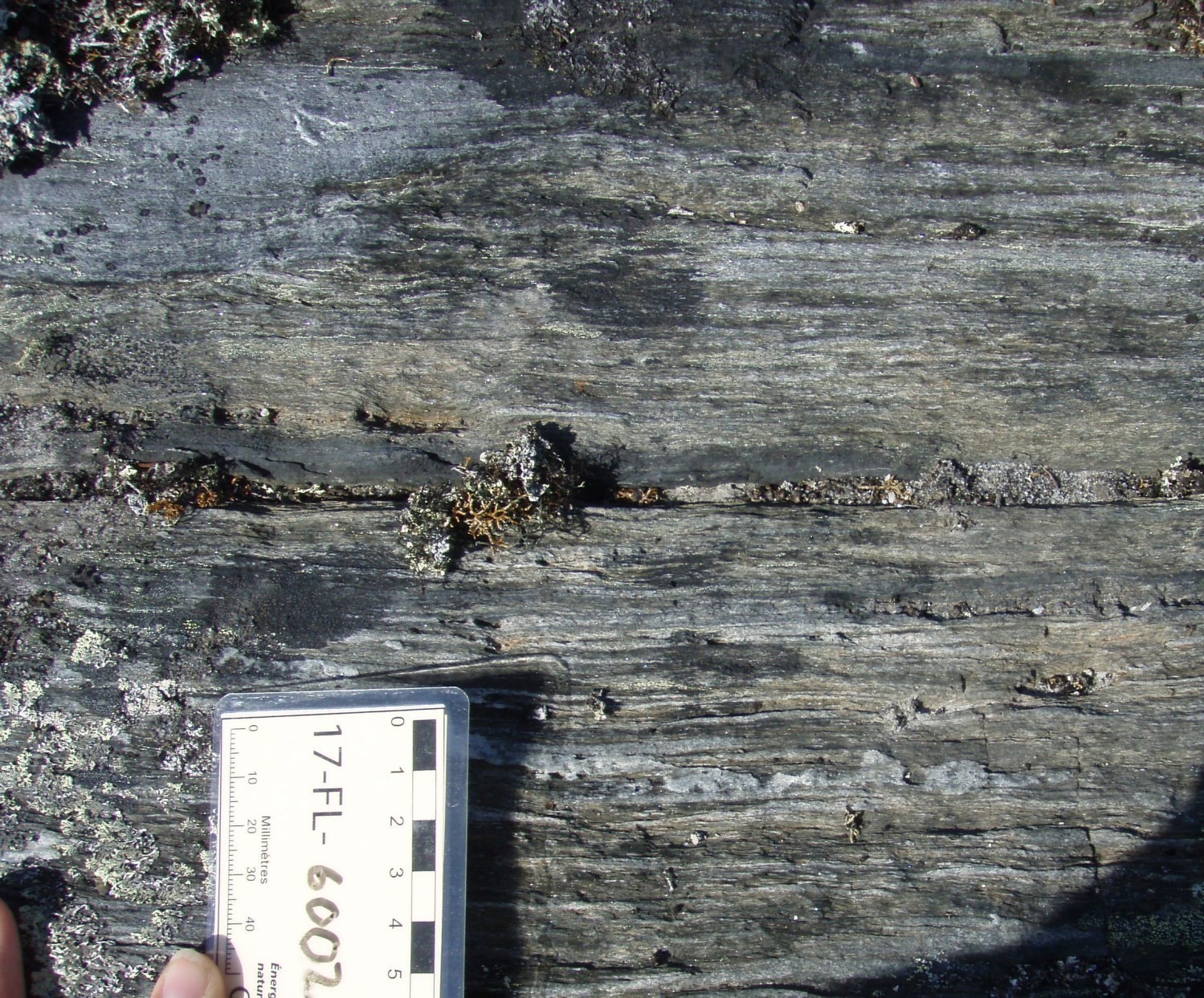 The majority of wackes have been observed in the Roberts Synclinal, where these rocks predominate as well as quartz arenites (Bilodeau and Caron-Côté, 2018). Wackes are also observed in the centre and east of the Trough (Dimroth, 1978). Wacke is light medium grey and brownish medium grey in altered surface and medium grey in fresh exposure. It is very fine to fine-grained and has laminations and schist structure. It is composed of quartz, biotite and muscovite, and commonly has magnetite as an accessory mineral.

Siltite and mudrock occur locally and usually in the form of interbeds up to 30 cm thick (Dressler ,1973, 1975, 1979; Dimorth, 1971, 1972). They are grey to greenish grey. Locally they have cross-bedded laminations and load figures, and usually consist of alternating 5-mm mudrock, siltite and fine-grained arenite beds (Dimroth, 1972).

Basal conglomerate was described and observed exclusively on the western flank of the Roberts Synclinal, at a few locations in the area between the Faucons and Yvon lakes (Hardy, 1976). Bed thickness ranges from 1 to 5 m. Conglomerate contains 15 to 20% fragments of quartzofeldspathic rock measuring 2 to 20 cm. These fragments are generally very narrow and are surrounded by very rounded centimetric stones of quartz. In a few places, the matrix consists of more than 50% of these pebbles cemented by fine-grained quartz and dolomite.

Dolomite beds are very local in the Forbes Lake area (Clark, 1977). These beds are 1 cm to 2 m thick. A dolomite unit is also found in the middle of the formation in the Goethite Lake area (Dimroth, 1978). Dolomitic sandstone is present very locally and is found in a few places at the formation’s base. It has a dark brown alteration patina (Dressler, 1973, 1979). 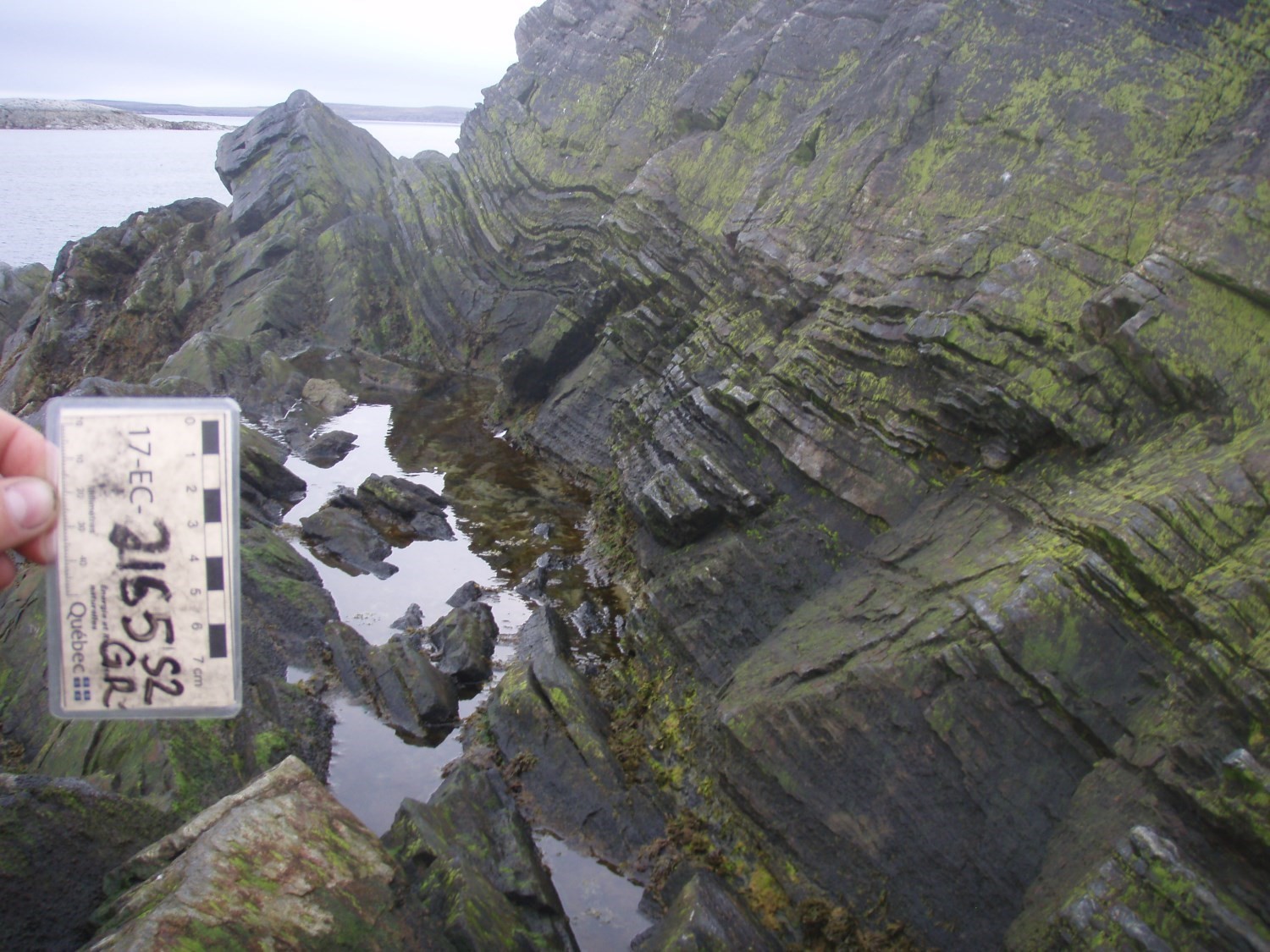 Quartzite is observed and well documented by Hardy (1976). It outcrops sporadically on the east and west sides of the Roberts Synclinal. It contains interstratifications of micaceous schist composed of quartz, muscovite and biotite. Quartzite is medium to coarse-grained and is composed of 60 % quartz and 35% garnet. Accessory mineral phases are grunerite, chlorite, stilpnomelane and magnetite. Garnets are millimetric and contain several quartz inclusions. They commonly have a long, narrow shape, which may indicate that they are pseudomorphs of micaceous minerals. Carbonates make up about 2 % of the rock and are fine-grained and interstitial. Grunerite contains quartz and magnetite inclusions.

The Wishart Formation stretches along the Labrador Trough. Its thickness generally ranges from 15 to 100 m. Within the Roberts Synclinal, its thickness ranges from 1 to 5 m and can very locally reach up to 50 m. Lateral variations in thickness have been observed. The formation’s thickness increases from 30 m at Stakit Lake to 50 m at Schefferville (Dimroth, 1972). It is also 30 m thick at the Goethite and Concession lakes, and reaches 60 to 75 m in the Hématite Lake area. The largest thicknesses are found at Lake des Oiseaux in the eastern part of the Labrador Trough (Dimroth, 1978).

In the Dyke Lake area, an age of 1877.8 ±1.3 Ma was obtained for a clast of syenite contained in a conglomerate interstratified with the Sokoman Formation, overlying the Wishart Formation. This dating provides a maximum sedimentation age slightly younger than the Wishart Formation in this area (Findlay et al., 1995). 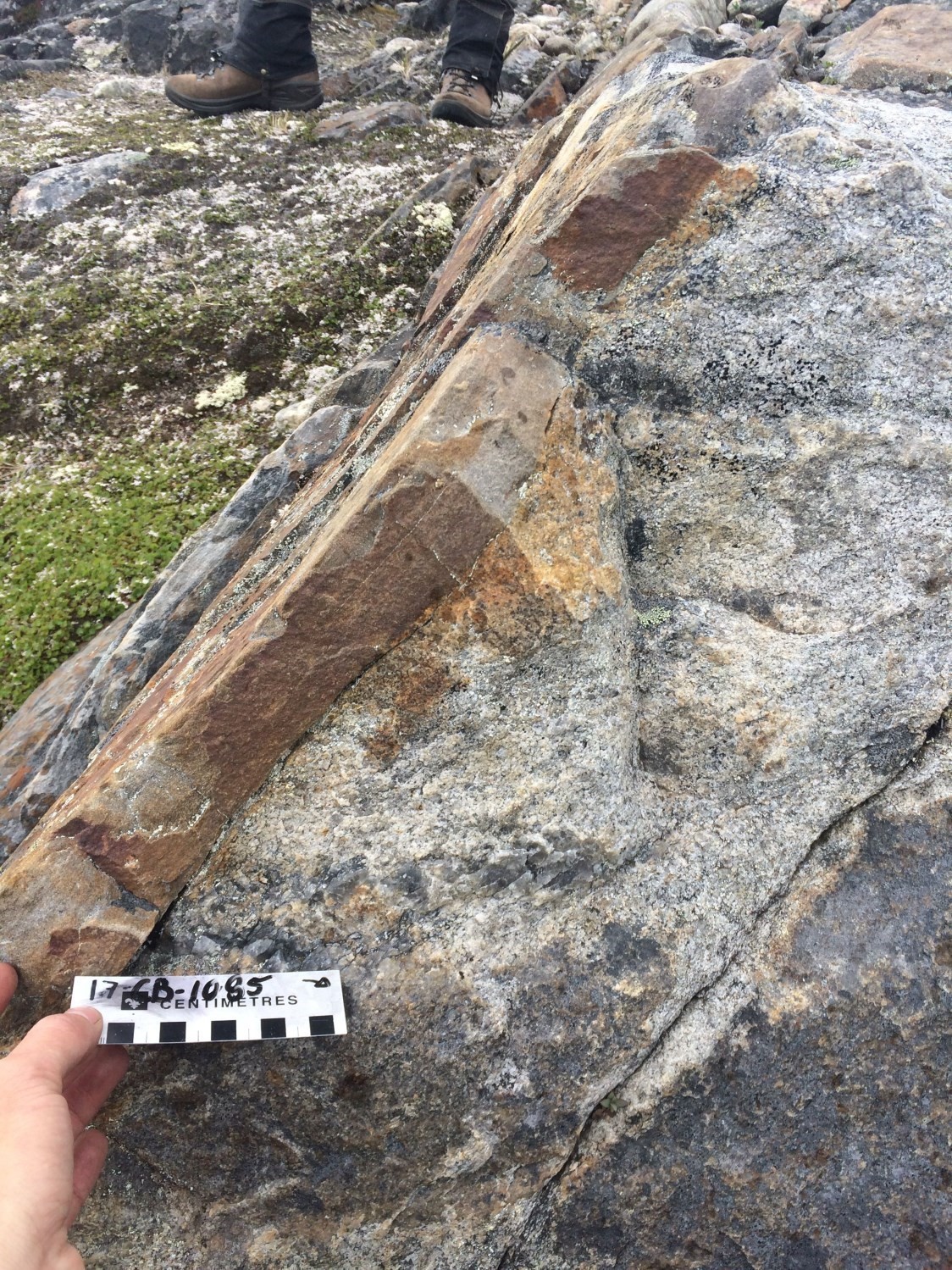