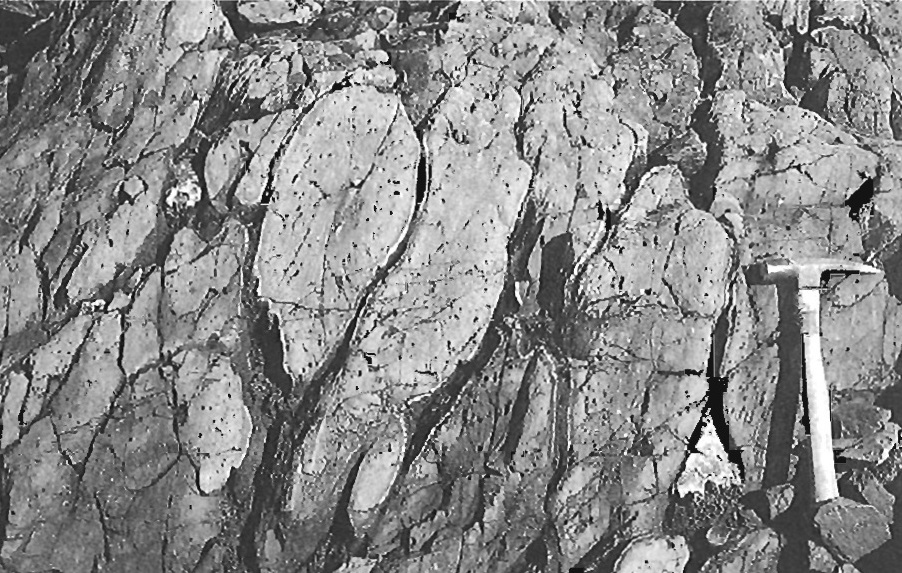 The Beauparlant Formation is a predominantly volcanic allochthonous rock package forming the base or median portion of the Southern Domain. It consists mainly of tholeiitic basaltic flows. Calc-alkaline rhyolite domes and pyroclastic layers are observed locally. The lower part of the unit contains a significant volume of detrital sedimentary rocks interstratified between flows, the proportion of which gradually decreases towards the top. The Beauparlant Formation is intruded by a large volume of hypovolcanic microgabbro sills (Lac Bélanger Suite), which become rather sparse towards the top of the formation. The unit shows, in smaller proportion, mafic and ultramafic sills and dykes of the Lac Esker Suite, which are distinguished from the former by their coarser grain size, mafic composition and commonly differentiated nature. Thin erosion klippes of the Beauparlant Formation, folded and metamorphosed to the upper amphibolite facies (Bareste 1990a, b; Bégin, 1992), are observed in thrust contact with Archean bedrock of the Kovik Antiform, as well as in continuous layers at the interface between the Kovik Antiform and Narsajuaq Arc.

The Beauparlant Formation volcanic unit consists of massive or pillowed flows of tholeiitic plagioclase basalt. Massive flows are abundant at the base of the sequence and pillowed flows predominate at the top. Basalt flows, usually highly sheared, have a varying thickness of 10 m or more, and their lateral extension can reach a few hundred metres. In places, pillows contain tabular cavities filled with calcite and quartz. Pillows also have 2 cm-thick aphanitic margins. The basalt alteration patina is light to medium green, locally reddish due to oxidation of disseminated pyrrhotite and pyrite. In thin section, basalt contain plagioclase microliths or phenocrystals with actinolite needles in a fine plagioclase matrix or chloritic groundmass partially epidotized (Togola, 1992; Moorhead, 1996).

Siltstone, sandstone and conglomerate beds are mainly concentrated at the base of the Beauparlant Formation. These sedimentary rock beds, generally interstratified with basalt, have a small lateral extension (100-200 m) and do not exceed ten metres in thickness. Siltstone is composed of rounded and subangular quartz grains in a chlorite matrix. Sandstone is mainly composed of subrounded quartz and plagioclase grains and some biotite and muscovite. The matrix consists of fine quartz grains and fine sericite or biotite flakes. The sandstone matrix also contains secondary carbonate. These immature sediments may come from a proximal source (Togola, 1992). The brecciated conglomerate facies is located in the Chukotat Lake area. To the east, it changes to volcaniclastic layers. This facies can be up to 250 m thick and extend over 6 km. Its fragments are angular to subrounded (0.1-40 cm) and varied in composition: siltstone, sandstone, limestone, dolomite, chert, rhyolite and basalt. The matrix is composed of detrital (generally recrystallized) crystals of calcite, quartz, plagioclase, biotite and dolomite. These rocks are very rich in secondary carbonates (Moorhead, 1989).

Phyllite and slate beds, interstratified in the volcanic pile, form sedimentary units of low lateral extension (100-200 m) and thickness varying between 1 m and 10 m. These rocks display fine millimetre-thick siliceous laminae. The alteration patina is generally reddish brown due to oxidation of pyrrhotite and disseminated pyrite. The fresh surface is typically black to dark grey. The petrographic study reveals angular to subangular quartz and plagioclase grains in a clay matrix locally epidotized. Clay deposits responsible for these phyllite and slate beds formed during periods of quiet volcanic activity (Togola, 1992; Moorhead, 1996).

Some rhyolite and felsic lava layers are observed in the Beauparlant Formation where they form lateral discontinuous lenses. These highly recrystallized rocks are grey to light green in altered surface and grey to very light yellowish-green in fresh exposure. Outcrops are generally massive and show few internal textures. Quartz and plagioclase phenocrystals 0.2-2 mm long are still present. The matrix is microgranulitic and is composed of quartz, feldspar, biotite, epidote, calcite ± riebeckite ± magnetite ± pyrite (Moorhead, 1989).

Volcaniclastic rocks interstratified in the tholeiitic basalt flow sequence make up a very small proportion (1%) of the unit. They include volcanic breccia, fine laminated tuffs, and lapilli and block tuffs. Volcanic breccia form low-thickness layers composed of fragmented basaltic material. Angular to subangular fragments vary in diameter from 1 cm to 10 cm and float in a chlorite-carbonate matrix. Laminated ash and lapilli tuffs form sedimentation units ranging from a few metres to a few tens of metres thick. These tuffs are grey to greenish grey in fresh exposure and altered surface. They are massive or have parallel laminae. In thin section, the rock exhibits angular to subangular quartz and plagioclase grains in a matrix composed of fine quartz grains. Lapilli and block tuffs form a 12 ﻿km x 2.5 km slice in the eastern portion of the basaltic unit (pPbe1). These tuffs are typically massive with angular to subrounded fragments consisting of basalt, felsic lava, gabbro and chert. The matrix is typically rich in chlorite and iron carbonates (Togola, 1992; Moorhead, 1996).

The iron formation is laminated and displays alternating centimetre-thick bands consisting of: 1) whitish bands, generally boudinaged and composed of almost only quartz (recrystallized chert), accompanied by minor amounts of grunerite, stilpnomelane and siderite; 2) brown to dark-red bands composed primarily of stilpnomelane and grunerite with siderite; and 3) rust-coloured bands composed of siderite and goethite with minor amounts of quartz, grunerite and stilpnomelane. Contacts between these three types of bands are generally sharp or locally transitional (Moorhead, 1996).

Little information is available. This unit is located in the Bélanger Lake area (sheet 35G06).

Dolomitic limestones and dolomites are generally massive, buff-coloured in altered surface and fresh exposure. They can occur as centimetric interbeds within a conglomerate unit, or they can form beds several tens of metres thick interstratified with phyllite, siltstone and sandstone beds. Limestones and dolomites are locally conglomeratic and contain a significant detrital component consisting of quartz grains and fragments resulting from reworking of the host sedimentary facies. The contacts between dolomites and limestones and other sedimentary and volcanic facies are locally gradual. The deposit environment is possibly in shallow water. Furthermore, carbonate precipitation occurred synchronously with explosive volcanic activity (Moorhead, 1989, 1996).

The Beauparlant Formation is part of the allochthonous package of volcanic and sedimentary units that make up the Southern Domain. The Beauparlant Formation generally conformably overlies the Nituk Formation, with which it is locally interstratified. The Beauparlant Formation is intruded, mainly at its base, by a hypovolcanic microgabbro suite (the Lac Bélanger Suite) (2038 +4/-2 Ma; Machado et al., 1993), and by the Lac Esker mafic and ultramafic Suite (1918 +9/- Ma). It is overlain by the Cécilia Formation (1959 +3/-2 Ma; Parrish, 1989) consisting of alkaline volcanics. A leucocratic diorite intrusion in the volcanic package was dated 1991 ±2 Ma (Machado et al., 1993). These ages allow for estimating the duration of this volcanic episode at ~80 Ma (between 2038 Ma and 1959 Ma).