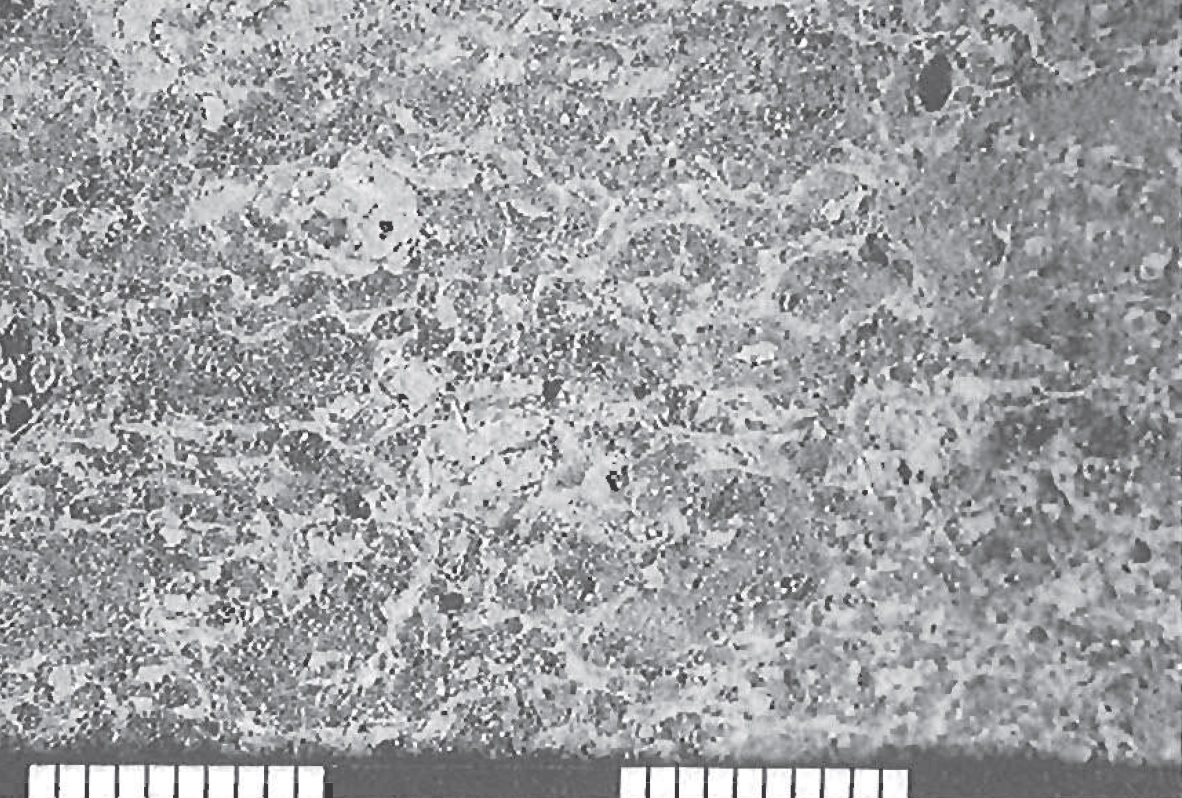 This unit was originally recognized in 1985 during the work of Baragar et al. (1986). A more detailed study was conducted in the summer of 1992 (Baragar et  al., 1992). Two brecciated ultramafic diatreme intrusions (pPle2) in Archean bedrock, grouped under the name Kuuvvaluk Diatremes by Madore et al. (2002) and described by Moorhead (1989) as block tuff, could represent feeder pipes for carbonatitic volcanism of the Lac Leclair Formation.

The Lac Leclair Formation is an allochthonous volcanic unit located in the basal section of the Southern Domain. Baragar (1992), taken from Moorhead (1996b), describes:

“Tuffs are mainly composed of generally accretionary lapillis 1 cm or less in size. They have a greyish alteration patina and are grey-green in fresh exposure. Diffuse bedding was observed locally. Despite the local presence of pillows, volcanism appears to be subaerial. The unit underwent strong recrystallization; the mineralogical assemblage includes, in varying proportions, antigorite, serpentine, carbonate, talc, chlorite, magnetite, ilmenite and chromite. In the lower part of the unit, magnetite forms 5% to 15% of the volume, and carbonate, up to 50%. The analysis of this unit indicate that it is ultramafic in composition with high contents in incompatible elements for an ultramafic rock. Baragar et al. (1992) interpreted these rocks as forming the magnesian pole of the carbonatite suite. Rocks of similar appearance and composition have been identified at the same stratigraphic level 70 km further east, NE of Allemand Lake (Moorhead, 1989). Thus, explosive volcanism of ultramafic composition and carbonatitic affinity seems to mark the early opening phase of the Trough basin.”

Baragar et al. (2001) compared the petrography of these rocks to that of meimechites of Castignon Lake in the central part of the Labrador Trough. A pyroclastic layer of the unit is also present NE of Allemand Lake (sheet 35G04).

See above for a description of this subdivision by Moorhead (1996b).

This unit consists of two diatremes located near the contact between rocks of the Ungava Trough and the Archean craton. These consist of small circular intrusions measuring ~70 m in diameter. The main component of these diatremes is a greenish, fine-grained and vesicular lamprophyric rock containing numerous fragments of epidotized xenoliths. In places, the rock contains autobrecciation textures. Small carbonatite layers inserted in lamprophyre are observed very locally. In thin section, lamprophyre has a very fine-grained matrix displaying a felt-like appearance. This ultramafic matrix is mainly composed of secondary minerals such as actinolite, chlorite, magnetite and leucoxene. Phlogopite phenocrystals and relics of olivine and pyroxene phenocrystals are present in the matrix. These rocks contain amygdules (Madore et al., 2002).

In the Leclair Lake area, the volcanic unit overlies an iron formation band (Kuuvvaluk Formation) and is overlain by a dolomitic bed (Baragar et al., 2001), which we interpreted as a facies of the Nituk Formation. It is also possible that this dolomite bed (~10 m thick) is associated with the Natirnaalik Formation, 130 km further east. In the Allemand Lake area, the unit is interstratified with ferruginous sedimentary rocks of the Kuuvvaluk Formation (Moorhead, 1989). Baragar et al. (2001) considered the Lac Leclair Formation to be one of the first manifestations of orogenic volcanism in a continental rift context. Unfortunately, this unit has not been dated.