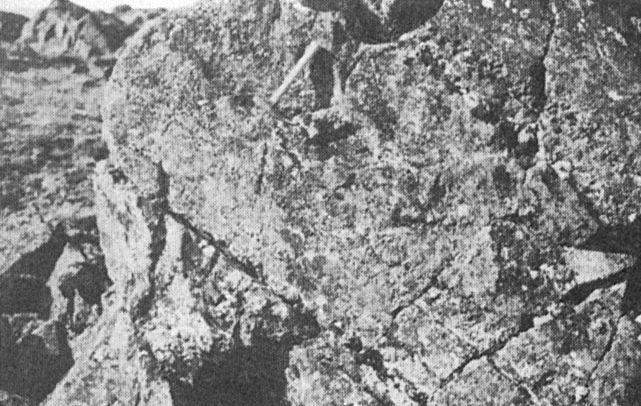 Lamothe et al. (1984), Roy (1989) and Moorhead (1989) described units in the summital part of the Povungnituk Group. Gaonac’h et al. (1989, 1992) and Picard (1989a) studied alkaline magmatism of the rocks forming the upper Povungnituk Group in the central part of the orogen. The term “Cécilia Formation” was introduced by Lamothe in 1994 to originally describe alkaline volcanics between Kenty Lake and Cécilia Lake. The term has been expanded in this compilation to include alkaline volcanic packages associated with detrital and chemical sedimentary beds overlying Beauparlant Formation tholeiitic basalts between Chukotat Lake and Esker Lake.

Volcaniclastics consist of many layers of volcanic breccia, scoriaceous flows, hyaloclastites and tuff. Highly sheared and carbonate volcaniclastics are found in fold hinges. They are characterized by abundant fragments of ankaramitic basalt of various sizes and shapes. The matrix has the same composition as the volcanic flows, and a pumiceous texture characterized by abundant amygdules filled with carbonate and chlorite (Picard, 1989a).

This unit consists of an alkaline basaltic sequence in the Kenty Lake area. Ankaramitic basalt forms several flows inserted in volcaniclastics. These flows consist of volcanic breccia and scoriae in the basal section, massive basalt in the middle portion and volcanic breccia in the summital section. The volcanic flow is characterized by the presence of black pyroxene or brown hornblende microphenocrystals in an aphyric volcanic groundmass, which is black-grey to dark green-grey in fresh exposure (Picard, 1989a).

Trachyandesite consists of a massive volcanic flow sequence that overlies volcaniclastics and ankaramitic basalt. It has a microlitic and microporphyritic texture with 4 to 5% K-feldspar and plagioclase rods. Rock outcrops in the northern part of the Povungnituk Group, SE of Nuvilic Lakes, display several massive flows, which are locally pillowed and interstratified with volcanic breccia (Picard, 1989a).

These rocks form several isolated edifices of limited extension (a few hundred metres) for a thickness of a few tens of metres. They consist only of massive and aphyric flows that are light grey in altered patina and green grey in fresh exposure. The rock is locally highly sheared and has many microfractures containing fluorine traces (Picard, 1989a).

This unit consists of mainly detrital sedimentary rocks such as siltstone, sandstone, conglomerate and phyllite. There are also a few beds of limestone, dolomitic limestone and chert.

The Cécilia Formation forms a ~108 km-long strip in the central section of the Southern Domaine, between Forcier Lake (sheet 35G08) and the western end of Chukotat Lake (sheet 35G05).

The Cécilia Formation is associated with an alkaline volcanic phase of local extent dated 1959 ±3 Ma. This unit marks the end of tholeiitic volcanism in the Povungnituk Group and the beginning of a phase consisting essentially of alkaline explosive volcanism punctuated by quiet periods, allowing for the deposition of clastic and chemical sediments. The lower contact of the Cécilia Formation is conformable with the Beauparlant Formation, while its upper contact is overthrusted by magnesian basalt of the Chukotat Group. To the west of Chukotat Lake, the Cécilia Formation disappears and is replaced laterally, in thrust contact, by the Nuvilic volcano-sedimentary Formation. Detrital sedimentary rocks of this latter unit have a chemical composition that is highly enriched in light rare earths and Zr, hence are believed to result from erosion of the Cécilia Formation (Giovenazzo et al., 1991; Moorhead, 1996a).