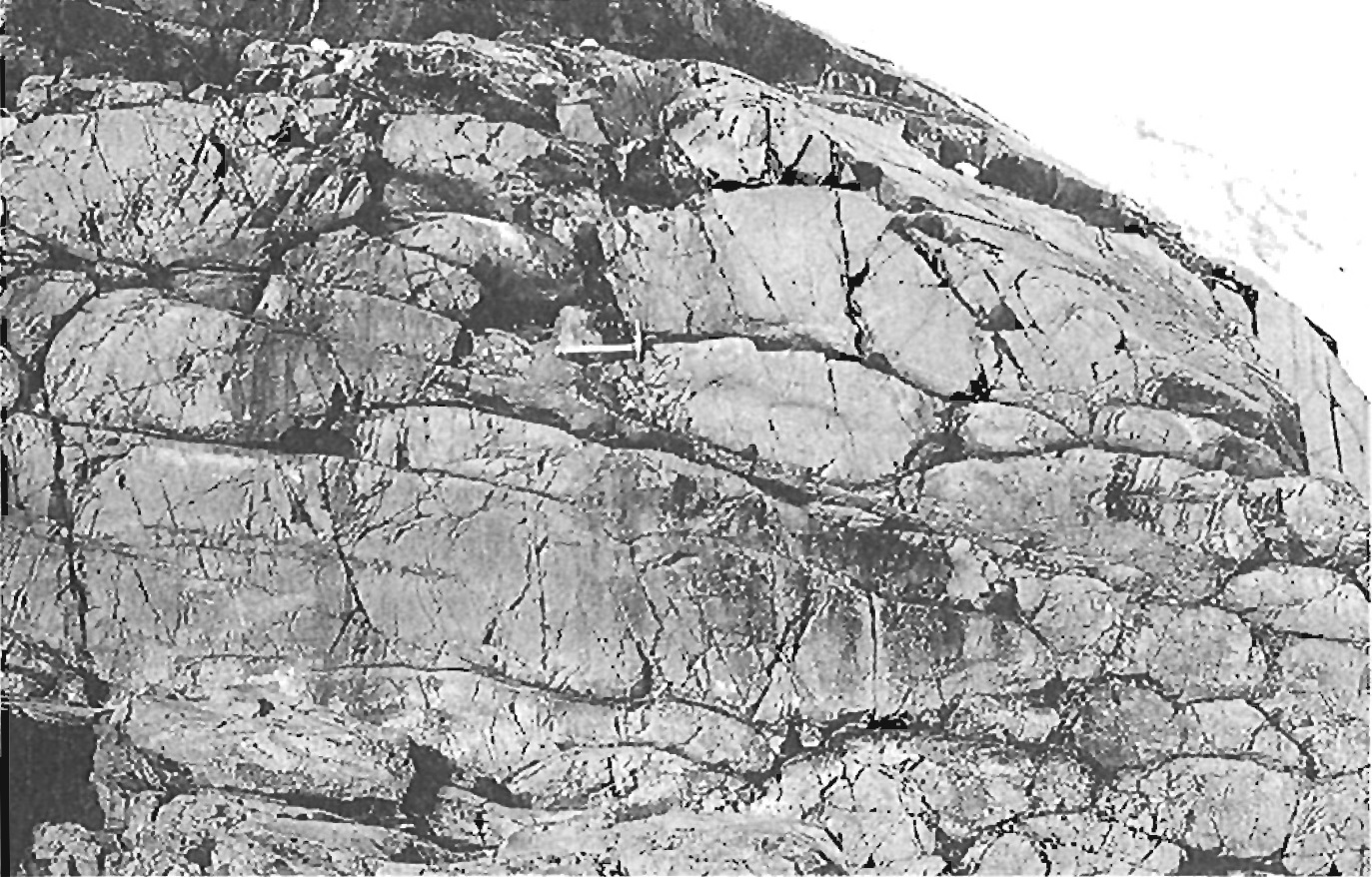 The Povungnituk Group was created by Bergeron (1959) in the Cape Smith Belt to identify a volcano-sedimentary rock package that unconformably overlies Archean bedrock. The work of Hynes and Francis (1982) and Francis et al. (1983) subsequently described the stratigraphy, structure and geochemistry of rocks of the Povungnituk and Chukotat groups. Lamothe et al. (1984) divided the Povungnituk Group into two subgroups. At the base, the Lamarche subgroup consists of a predominantly sedimentary rock package. Overlying the latter, the Beauparlant Subgroup consists mainly of volcanic or volcaniclastic units. These subdivisions were subsequently maintained by Ministère‘s researchers (Roy, 1985, 1989; Moorhead, 1986, 1988, 1989, 1996a, 1996b; Togola, 1992). In accordance with the North American Stratigraphic Code, the use of these two subgroups has been discontinued in this compilation. Three of the eight formations of the Povungnituk Group were introduced by Lamothe (1994), namely the Beauparlant, Cécilia and Nuvilic formations. The other five units, namely the Korak, Kuuvvaluk, Leclair, Nituk and Natirnaalik formations, are newly introduced in this record.

The Povungnituk Group unconformably lies on Archean bedrock (Taylor, 1982; St-Onge et al., 1988; Moorhead, 1988, 1996b). Because of tectonic overprinting, this discordance is only visible very locally at the contact between bedrock and thin beds of lenticular conglomerate or in erosion klippes at the eastern end of the orogen. Apart from these sparse autochthonous units, all units forming the Povungnituk Group are allochthonous, forming imbricate slices connected to a basal decollement fault (St-Onge et al., 1988). The distribution of the lower Povungnituk sedimentary units indicates an increasingly distal setting and gradual deepening from south to north.

The Povungnituk Group extends laterally for more than 370 km in an ENE orientation, mainly in the southern part of the Ungava Orogen Southern Domain.

The zircon U-Pb analysis from an intrusion of the Lac Bélanger Suite, cutting the base of the Povungnituk sedimentary sequence, dates the rift opening in Archean bedrock at >2038 ±2 Ma (Machado et al., 1993). Considering that the age of the Chukotat Group’s volcanism, which overlies and overthrusts the Povungnituk Group, is dated 1882.1 ±2 Ma (Bleeker and Kamo, 2018), the total duration of the Povungnituk phase (that is, from progressive opening of the continental rift to the appearance of MORB volcanism) is thus ~156 Ma.

The Korak Formation, the basal unit of the Povungnituk Group, unconformably overlies Archean bedrock and is truncated at the top by a basal decollement fault. Other Povungnituk units overlie this fault and are therefore allochthonous, except in Burgoyne Bay erosion klippes where the decollement is higher in the sedimentary sequence (St-Onge et al., 1988), preserving layers corresponding to lateral equivalents of units such as the Kuuvvalik and Nituk formations. Volcanic units of the Povungnituk Group were geochemically correlated with the Eskimo and Flaherty formations of the Belcher Islands (Legault et al., 1994; Dunphy et al., 1995). The summit of the Povungnituk Group is stratigraphically and structurally overlain (thrust contact) by the Chukotat Group.