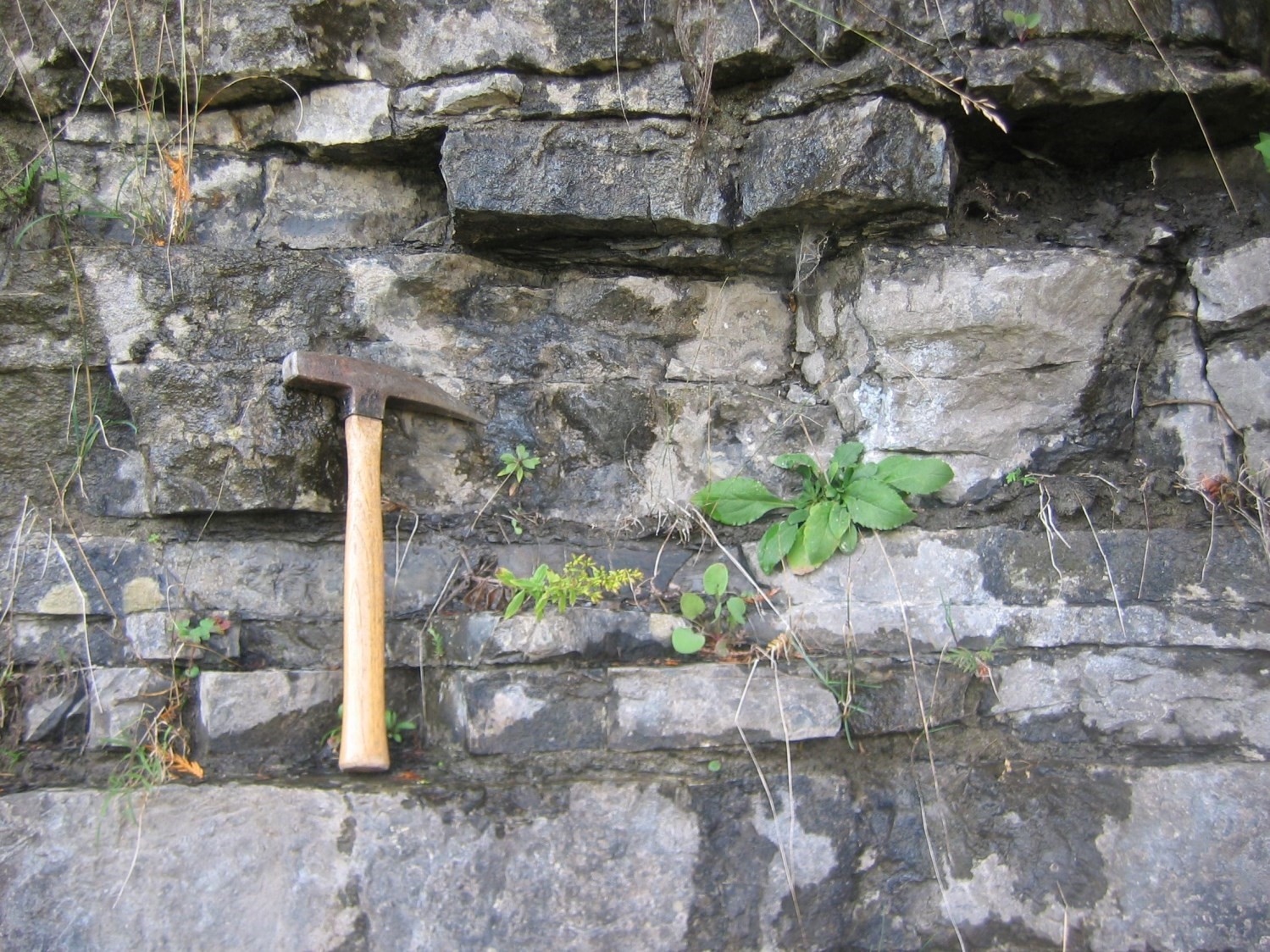 The Trenton Group has been studied since the earliest days of American geology. Vanuxem (1838) used the term « Trenton » to refer to a stratigraphic succession between the Black River limestone and black shales of Utica at Trenton Falls, New York. Several paleontologists and stratigraphers of the time and today sought to understand the relationship between the Trenton Group, the underlying Black River Group and the Utica Shale above it. The first geologist to establish a preliminary stratigraphy was Johnston (1912), who separated the Dalmanella bed, the Prasopora bed, the Crinoid bed, and the Hormotoma and Rafinesquina Deltoidea bed in Ontario. The latter were very poorly described and their extensions were poorly defined. Raymond (1914a, 1914b, 1916, 1921) studied this group and kept the first three units. It was not until 1925 that Rudolf Ruedemann introduced the concept of facies using graptolites to understand the horizontal extent of the Trenton Group and Utica Shale. In 1943, Marshall Kay and his students established the first stratigraphic column of the Trenton Group and continued to work on it, eventually subdividing it into five formations (Kay, 1937, 1943, 1953): the Rockland, Kirkfield, Shoreham, Denmark and Cobourg limestones. Wilson (1946) defined the Rockland, Hull, Sherman Fall and Cobourg members of the Trenton Group. Finally, in 1977 Fisher reviewed the Kay subdivision and defined seven divisions: the Selby, Napanee, Kings Falls, Sugar River, Denley, Steuben and Hillier limestones. In 2002, Brett and Baird revised chronostratigraphic relationships and eventually subdivided the Trenton Group into eight units: (a) the Napanee Formation, (b) the King Falls Limestone, (c) the Sugar River Formation, (d) the Glens Falls Formation, (e) the Dolgeville Facies, (f) the Steuben Limestone, (g) the Hillier Formation, and (h) the Deer River Shale.

In Quebec, the Trenton Group was introduced in the Montréal area and was described differently than its American counterpart by Clark (1944). This author divided it into four formations: the Terrebonne, Tétreauville, Montréal and Mile End formations. However, this division lacked an equivalent to the Rockland Formation observed on the Ontario side. Clark (1972) then conducted a review of the Trenton Group in the Montréal area, incorporated the « Terrebonne facies » into the Tétreauville Formation and added the Deschambault Formation between the Mile End and Montréal formations. Subsequently, the various work carried out in the St. Lawrence Lowlands helped complete the nomenclature of the Trenton Group (e.g., Globensky 1987, 1991). This nomenclature is retained in this unit.

It should be noted that in the Saguenay–Lac-Saint-Jean region, several studies (Sinclair, 1953; Harland et al., 1985; Desbiens and Lespérance, 1989; Hébert and Lacoste, 1998) examined limestones in the region. These authors separated these sedimentary rocks into four formations: the Tremblay, Simard, Shipshaw and Galets formations. According to Desbiens and Lespérance (1989), they should not be part of the Trenton Group, although these authors have not formally created another group. In contrast, in mapping of NTS sheet 22D06, Hébert and Lacoste (1998) included the Tremblay and Simard formations in the Trenton Group.

In the Daniel-Johnson Reservoir area, on the ancient shore of Manicouagan Lake, Ordovician sedimentary rocks have been reported by several authors (Kish, 1962; Murtaugh and Currie, 1969; Murtaugh, 1976; Moukhsil et al., 2013). These sedimentary rocks have been grouped in the René Levasseur Formation. This formation probably represents klippes of the St. Lawrence Platform (Moukhsil et al., 2013) that were preserved from erosion by burial during the meteorite impact that occurred in this area in the Triassic. The René-Levasseur Formation is included in the Trenton Group.

According to Globensky (1993): “The Trenton Group consists primarily of black or dark bluish-grey limestone, rich in fossils, with thin shale beds separating limestone into beds ranging in thickness from 3 to 30 cm. Closer to the top, the proportion of shale interstratifications increases. There are also zones of recrystallized limestone, generally without shale interstratifications; these zones are thin and located at the base of the group. The Trenton Group limestone is sometimes highly bituminous.”

In Quebec, the Trenton Group contains 16 formations that do not all outcrop in the same areas, but that can occupy the same stratigraphic position. Thus, several Middle Ordovician formations (Tétreauville, Montréal, Neuville, Deschambault, Hull, Saint-Marc, Mile-End, Ouareau, Fontaine, Pont-Rouge and Sainte-Anne) can be correlated along the north shore of the St. Lawrence River, from the greater Montreal area to the La Malbaie region (see the schematic stratigraphic columns of Harland and Pickerill, 1982). At the base, in contact with the Black River Group, there are generally the Mile End, Ouareau, Fontaine, Saint-Marc and Pont-Rouge formations, overlain by the Deschambault Formation. The latter is present in all regions and is overlain by the Montréal and Tétreauville formations in the greater Montreal area, and by the Neuville Formation everywhere else.

In the Lake Saint-Jean area, the Upper Ordovician Galets, Shipshaw, Simard and Tremblay formations cannot be mapped at the 1:50 000 scale because they are generally not more than 50 m thick and subhorizontal (<4° dip). On the geological map of the Saguenay–Lac-Saint-Jean region (sheets 32A08 and 22D), the Trenton Group is hence shown instead of these four related formations. The stratigraphic column shows the pile of these four formations in the section studied by Lavoie and Asselin (1998) in the Chambord area (NE corner of NTS sheet 32A08).

According to Globensky (1993): “The Trenton Group’s thickness ranges from 96 to 246 m, with the maximum being found in the Montréal area. The southernmost outcrops are located near Saint-Jean-d’Iberville, then in an SE-NW-oriented strip extending to Montréal where the group reaches its greatest extent. The Trenton Group is also located north of Montréal, from Joliette to the La Malbaie region, as well as in the Saint-Dominique slice.”

According to Globensky (1993): “The contact between the Trenton [Group] and underlying Black River Group is marked by a schistose or argillaceous zone with no apparent angular discordance. The upper contact with the overlying Utica [Shale] is generally discordant. Thus, at Grondines, Clark and Globensky (1975) observed a discordance likely resulting from subaerial erosion, marked by a thin layer of pyritic material separating the two units. However, in the Quebec City area, the Trenton-Utica contact is gradual and is located at the top of the last bed of grey micrite.”

CLARK, T. 1944. Structure and stratigraphy in the vicinity of Montréal. Transactions of the Royal society of Canada; volume 38.

RAYMOND, P.E. 1914a. The Trenton Group in Ontario and Quebec. Geological Survey of Canada, summary report 1912.

RAYMOND, P.E. 1916. The correlation of the Ordovician strata of the Baltic basin with those of eastern North America. Bulletin of the Museum of Comparative Zoology at Harvard College; volume 56, pages 179-286.

RAYMOND, P.E. 1921. A contribution to the description of the fauna of the Trenton group. Geological Survey of Canada Museum Bulletin; volume 31, page 64.