Two diamond drillings in the Gauthier Quarry (in Saint-Marc-des-Carrières) crossed, under limestone of the Deschambault Formation, 8.8 and 11.3 m of quartzitic sandstone overlying gneiss. Although not outcropping and likely not widespread, Clark and Globensky (1975) considered it of sufficient importance to define the Saint-Marc Formation. The name refers to the town of Saint-Marc-des-Carrières (sheet 31I09) where drillings were conducted.

The Saint-Marc Formation consists of a light, almost pure, well-sorted quartzitic sandstone (Clark and Globensky, 1975; Harland and Pickerill, 1982; Globensky, 1993). It contains limestone interbeds of the Deschambault Formation. This sandstone is interpreted as a shallow, subtidal, clastic sedimentary deposit from a local shoreline or near an island (Harland and Pickerill, 1982). The type section described below is taken from the bottom 11.3 m of driling Gauthier No. 2, in Saint-Marc-des-Carrières (Clark and Globensky, 1975):

In the two Gauthier Quarry drillings, the Saint-Marc Formation is 8.8 and 11.3 m thick (Clark and Globensky, 1975). This sandstone does not outcrop and has not been observed elsewhere. 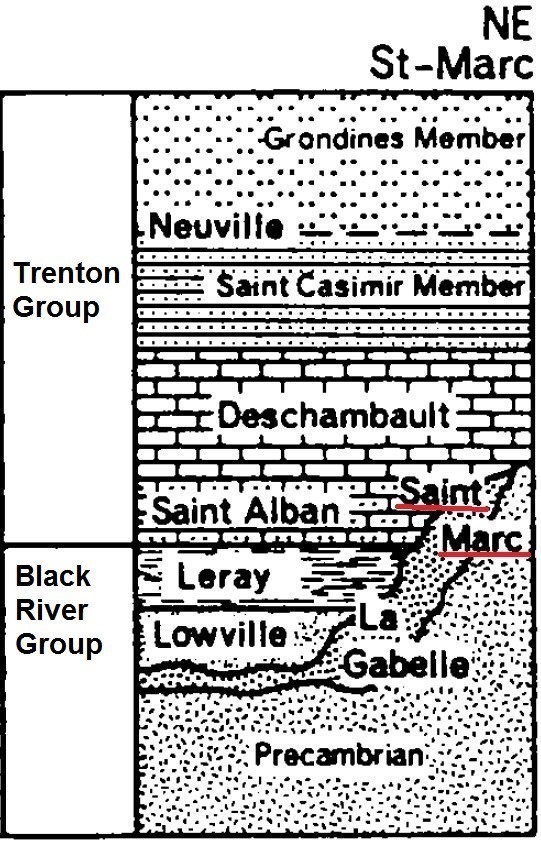 No fossil was observed in the sandstone. However, in drilling Gauthier No. 1, typical bryozoans of the Deschambault Formation were observed in limestone interbeds (Clark and Globensky, 1975).