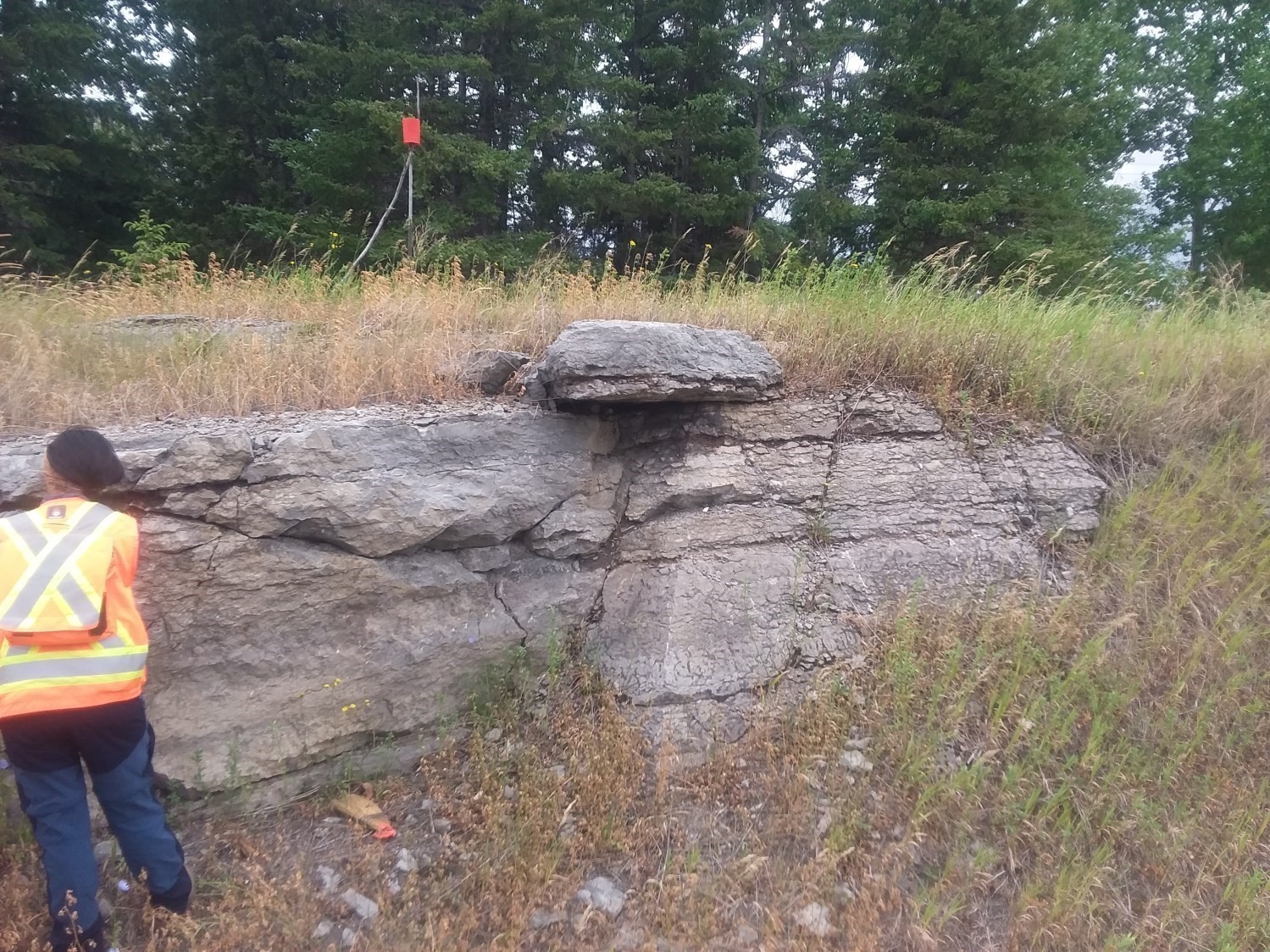 The Upper Ordovician Simard Formation was introduced by Sinclair (1953) in the Lake Saint-Jean area. This formation belongs to the St. Lawrence Platform, which forms a slice in the Grenville Province. All Ordovician sedimentary rocks in this region were assigned to the Trenton Group by several authors from a chronostratigraphic perspective (e.g., Dresser and Denis, 1946; Sinclair, 1953). Other authors have done so on lithostratigraphic bases (Benoit and Valiquette, 1971; Harland et al., 1985, 1987). Instead, Desbiens and Lespérence (1989) proposed the creation of a new group for these rocks, but did not. Although spatial correlation between these Ordovician rocks in the Lake Saint-Jean area and those of the Trenton Group of the St. Lawrence Platform is not formally established, the Simard Formation is maintained in this group.

The Simard Formation consists of limestone and siltstone beds. The carbonate facies of this formation represent deposits in a shallow sedimentary basin in a calm or protected marine environment. In the Lake Saint-Jean area, the Shipshaw Formation and the three other related formations (Galets, Shipshaw and Tremblay) cannot be mapped at the 1:50 000 scale because they are generally not more than 50 m thick and subhorizontal (<4° dip). On the geological map of the Saguenay-Lac-Saint-Jean region (sheets 32A08 and 22D), the Trenton Group is hence shown instead of these four related formations. Four separate units, also non-mappable at the 1:50 000 scale, make up the Simard Formation. These units have been recognized throughout the Lake Saint-Jean area and north of Saguenay, except near the village of Mashteuiatsh (Pointe-Bleue) (Desbiens and Lespérence, 1989).

Unit Ossz1 consists of alternating centimetric beds, thin and regular, of calcilutite and coarse-grained sandstone (15-20% of beds). These sandstones may be arkosic and/or conglomeratic. These sandstone beds are replaced along the Shipshaw River by argillaceous siltstone beds that contain fragments of crushed fossils. Desbiens and Lespérence (1989) observed two corrosion surfaces in carbonate facies along the Chambord road. The thickness of this unit ranges from 0.4 to 2.3 m in the Plourde quarry.

Unit Ossz2 consists of dark grey calcilutite that forms several beds 10 to 30 cm thick. Interstratifications are very thin and consist of dark grey mudshale and limestone. The thickness of this unit ranges from 1.5 m at Chambord to 11.25 m at Rapides des Boucher.

Unit Ossz3 consists mainly of calcilutite beds containing black chert nodules locally. It is also characterized by the absence of shale beds. Beds are less regular than in underlying units. The thickness of that unit is fairly regular, 10 to 20 cm at the Plourde quarry and 30 cm at Chambord (Desbiens et Lespérence, 1989).

Unit Ossz4 consists mainly of thick (50 cm) limestone beds. It contains thin, undulating shale beds locally. Limestones are grey to grey-brown in fresh exposure and yellowish brown in altered surface. Limestones consist of wackestone (the most abundant), packstone and grainstone (Desbiens and Lespérence, 1989). Unit Ossz4 is the richest in fossils compared to other units in this formation.

The stratigraphic column shows the pile of the other three formations in relation to the Simard Formation in the section studied by Lavoie and Asselin (1998) in the Chambord area (NE corner of NTS sheet 32A08).