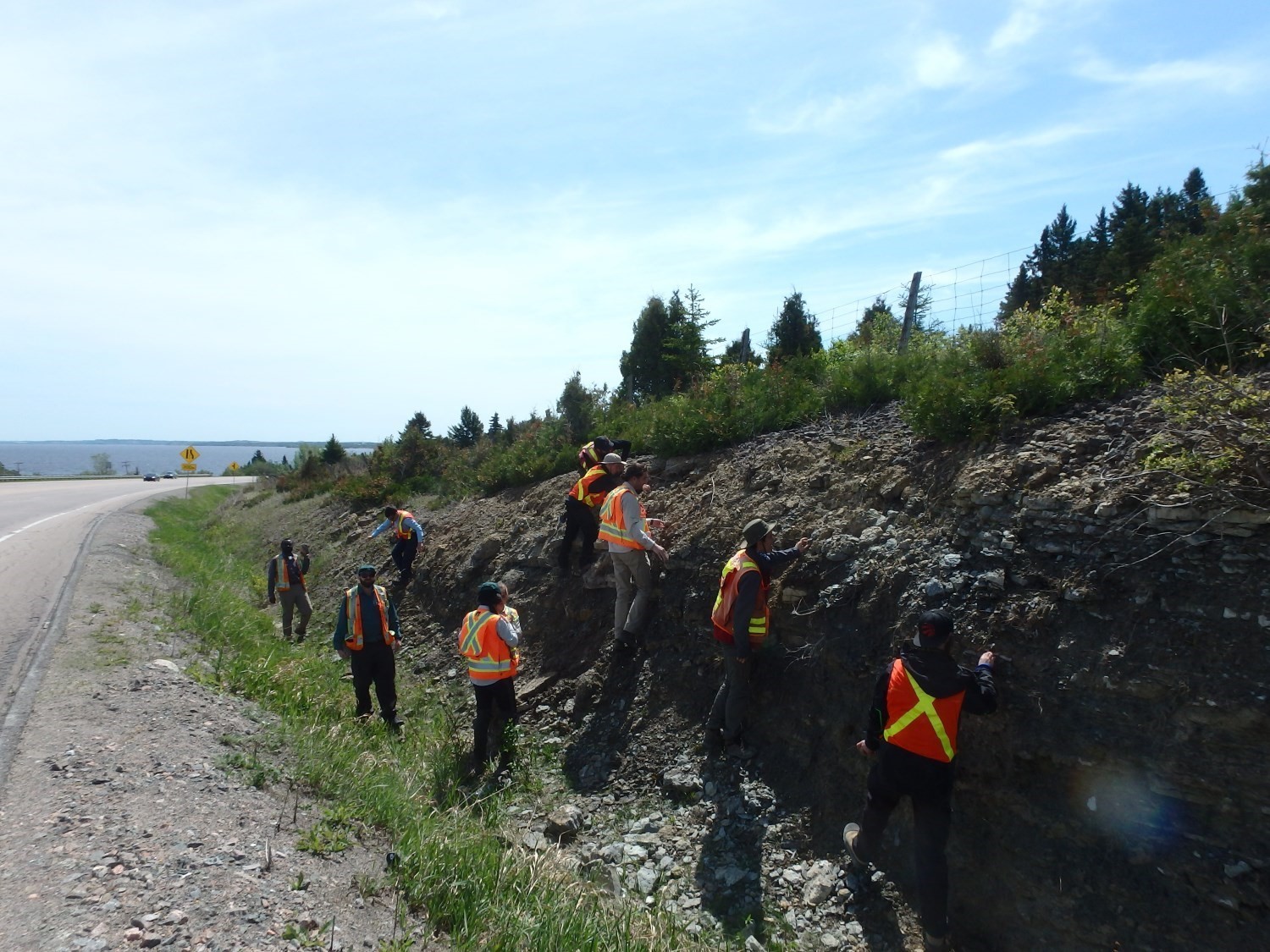 The Upper Ordovician (449-454 Ma) Galets Formation was introduced by Sinclair (1953) in the Lake Saint-Jean area. This formation belongs to the St. Lawrence Platform, which forms a slice in the Grenville Province. All Ordovician sedimentary rocks in this region were assigned to the Trenton Group by several authors from a chronostratigraphic perspective (e.g., Dresser and Denis, 1946; Sinclair, 1953). Other authors have done so on lithostratigraphic bases (Benoit and Valiquette, 1971; Harland et al., 1985, 1987). Instead, Desbiens and Lespérence (1989) proposed the creation of a new group for these rocks, but did not. Although spatial correlation between these Ordovician rocks in the Lake Saint-Jean area and those of the Trenton Group of the St. Lawrence Platform is not formally established, the Galets Formation is maintained in this group. 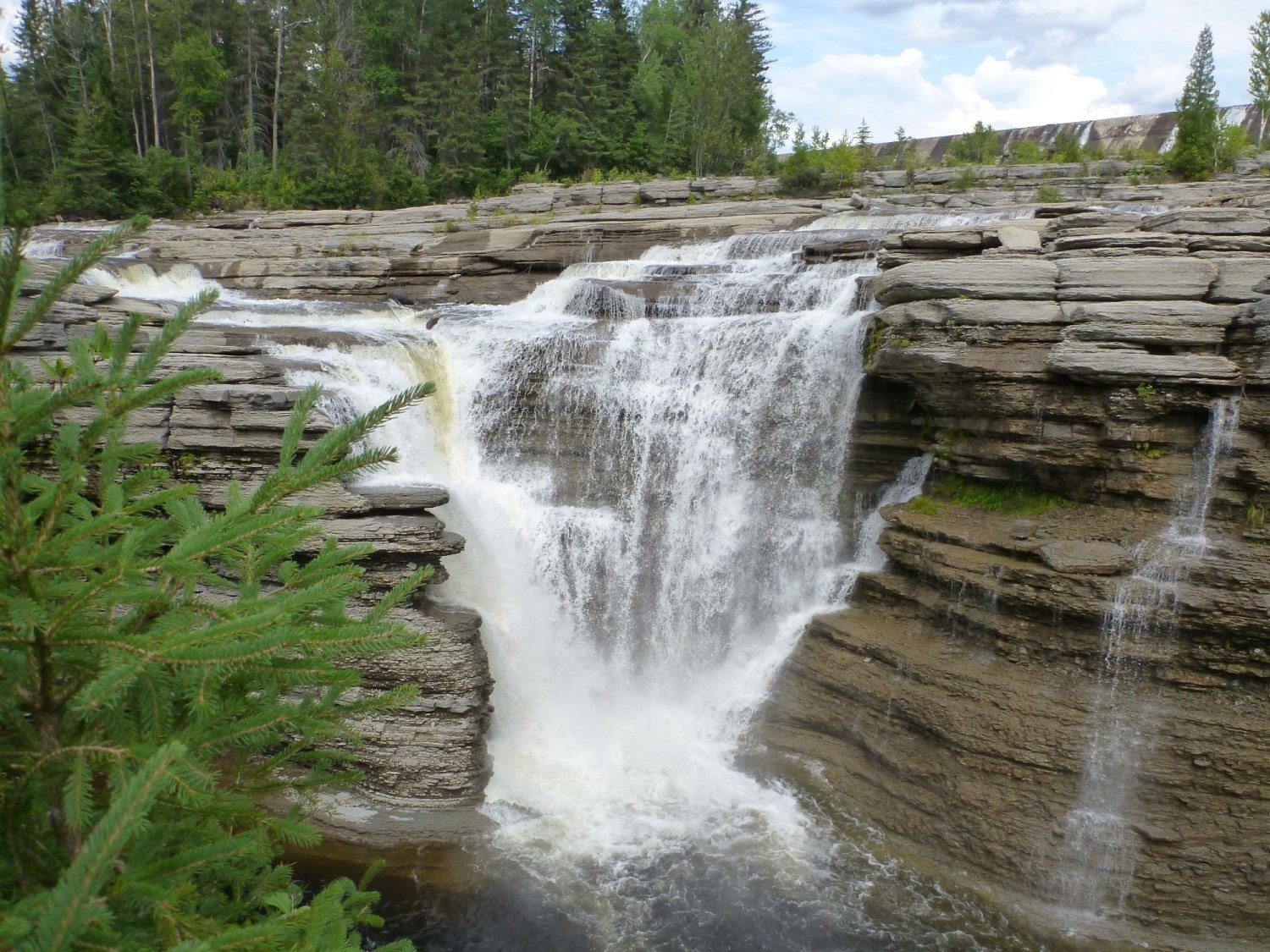 The Galets Formation consists of a single echinoderm calcarenite (grainstone) facies. This calcareous facies is bedded (<1 m, 50 cm on average), well sorted and bioclastic. It was deposited in a high-energy and shallow sedimentation environment (turbulent regime), locally affected by tidal currents (subtidal zone; Jones and Desrochers, 1992). Shale beds are scarce. Calcarenite is massive and contains calcisiltite (packstone) beds approximately 5-10 cm thick and that can make up 30% of the sequence. Sedimentary figures such as cross-lamination, cross-bedding and hummocky cross-stratification are observed in the Galets Formation. The latter is also characterized by high P2O5 content (0.07-18.91%; Jones and Desroches, 1992).

In the Lake Saint-Jean area, the Galets Formation and the three other related formations (Shipshaw, Simard and Tremblay) cannot be mapped at the 1:50 000 scale because they are generally not more than 50 m thick and subhorizontal (<4° dip). On the geological map of the Saguenay–Lac-Saint-Jean region (sheets 32A08 and 22D), the Trenton Group is hence shown instead of these four related formations.

The maximum thickness of the Galets Formation is 10 m, measured at Chute-aux-Galets (Lavoie and Asselin, 1998).

The Galets Formation overlays the Shipshaw Formation and is in contact with shales of the Pointe-Bleue Formation that broadly cover it. This contact is observed at several locations, for example along the shore of Lake Saint-Jean near the village of Mashteuiatsh (Pointe-Bleue).

The stratigraphic column shows the pile of the other three formations in relation to the Galets Formation in the section studied by Lavoie and Asselin (1998) in the Chambord area (NE corner of NTS sheet 32A08).