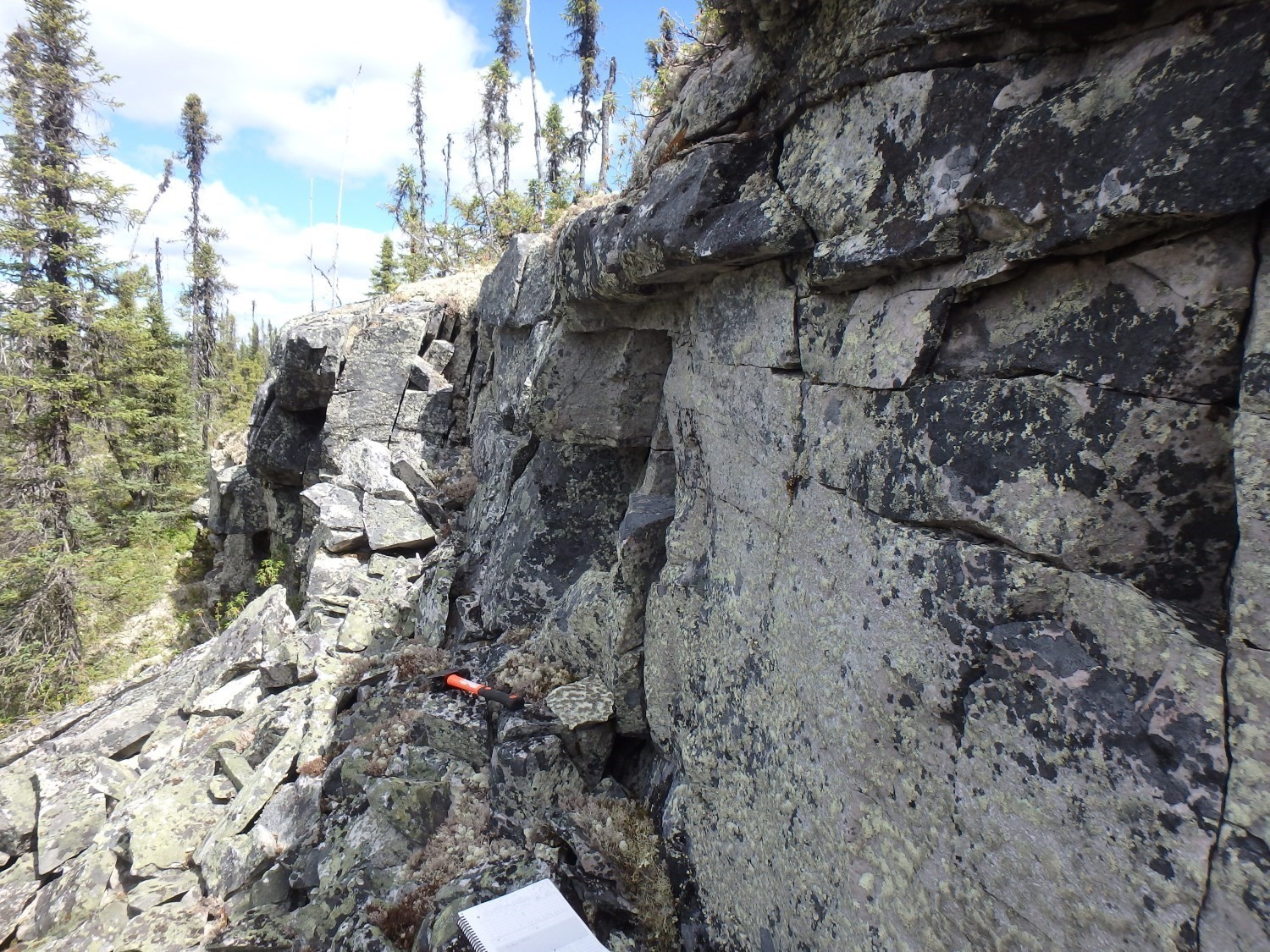 The « Matoush Formation » was established by Genest (1989) and refers to a lake in NE Otish Basin (sheet 23D07) named in honour of the Matoush family in the village of Mistissini. The Matoush Formation corresponds to the first three units described by Chown and Caty (1973) in the type section of the Indicator Formation, later elevated to the rank of group by Genest (1989). Correlations between the different nomenclature used in previous work are summarized in the Otish Supergroup record and in the summary table of Genest (1989, p. 21). The Ministère‘s compilation maps (2010a-c) are essentially based on descriptions from Genest (1989), which are summarized in the following section.

The base of the formation is characterized by polymictic conglomerate with fragments of volcanic rocks from underlying Archean bedrock. This lithology gradually changes to the main basal quartz pebble or cobble oligomictic conglomerate. South of Indicateur Lake, a 22 m thick section exposing this conglomerate shows that the maximum clast size decreases from 40 cm at the base to 4 cm at the top, while the quantity of quartz fragments increases from 1% to 80% (Genest, 1986). Conglomerate is beige to light green and mainly arkosic in composition. Fragments are generally rounded and vary widely in size from one area to another, 4 to 50 cm for quartz fragments and up to 1 m for metavolcanic rock fragments. Some conglomerate beds also contain angular fragments of quartz and feldspar up to 2.5 cm. K-feldspar (orthose and microcline) is characterized by an argillaceous alteration (illite and kaolinite). 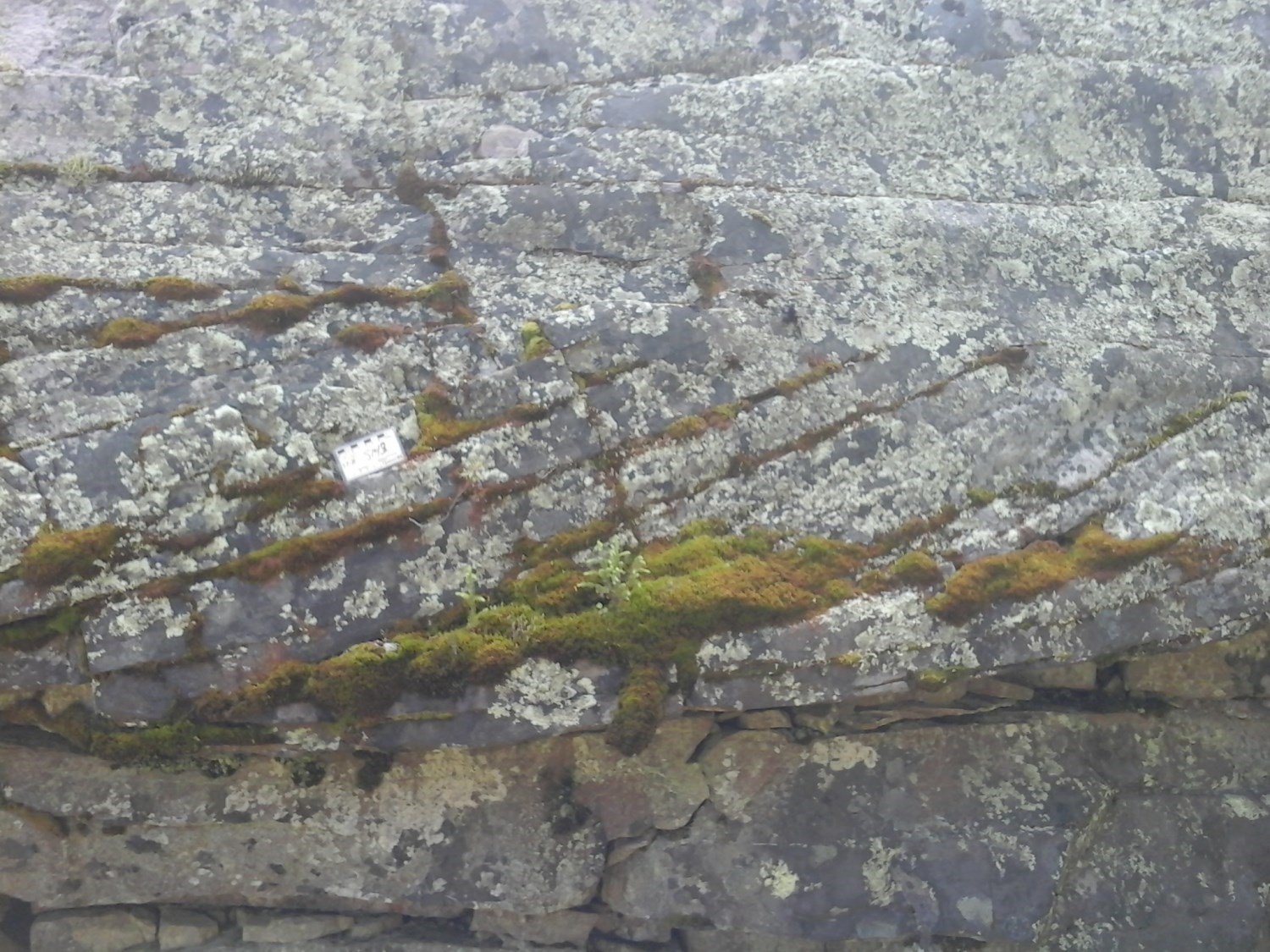 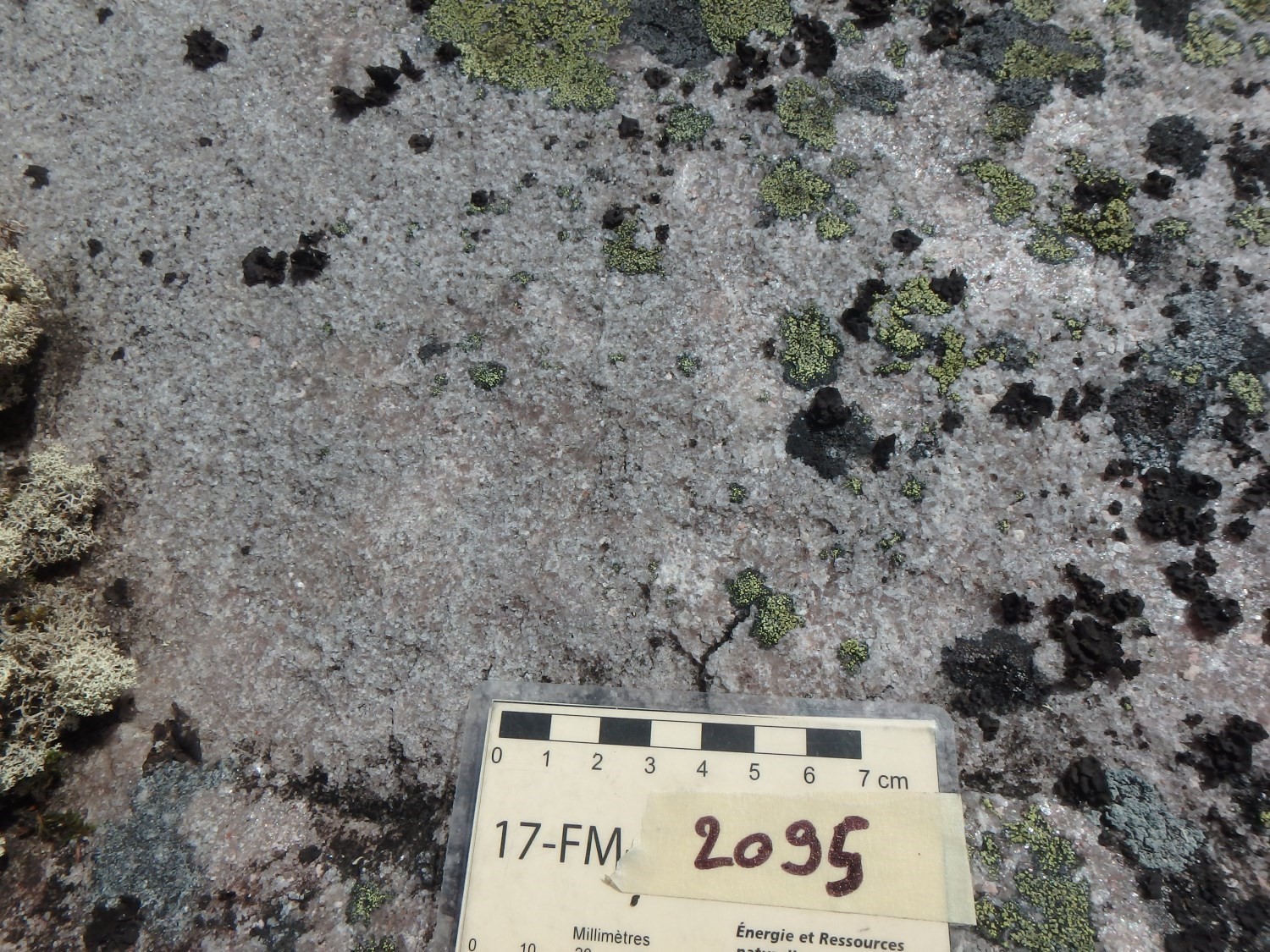 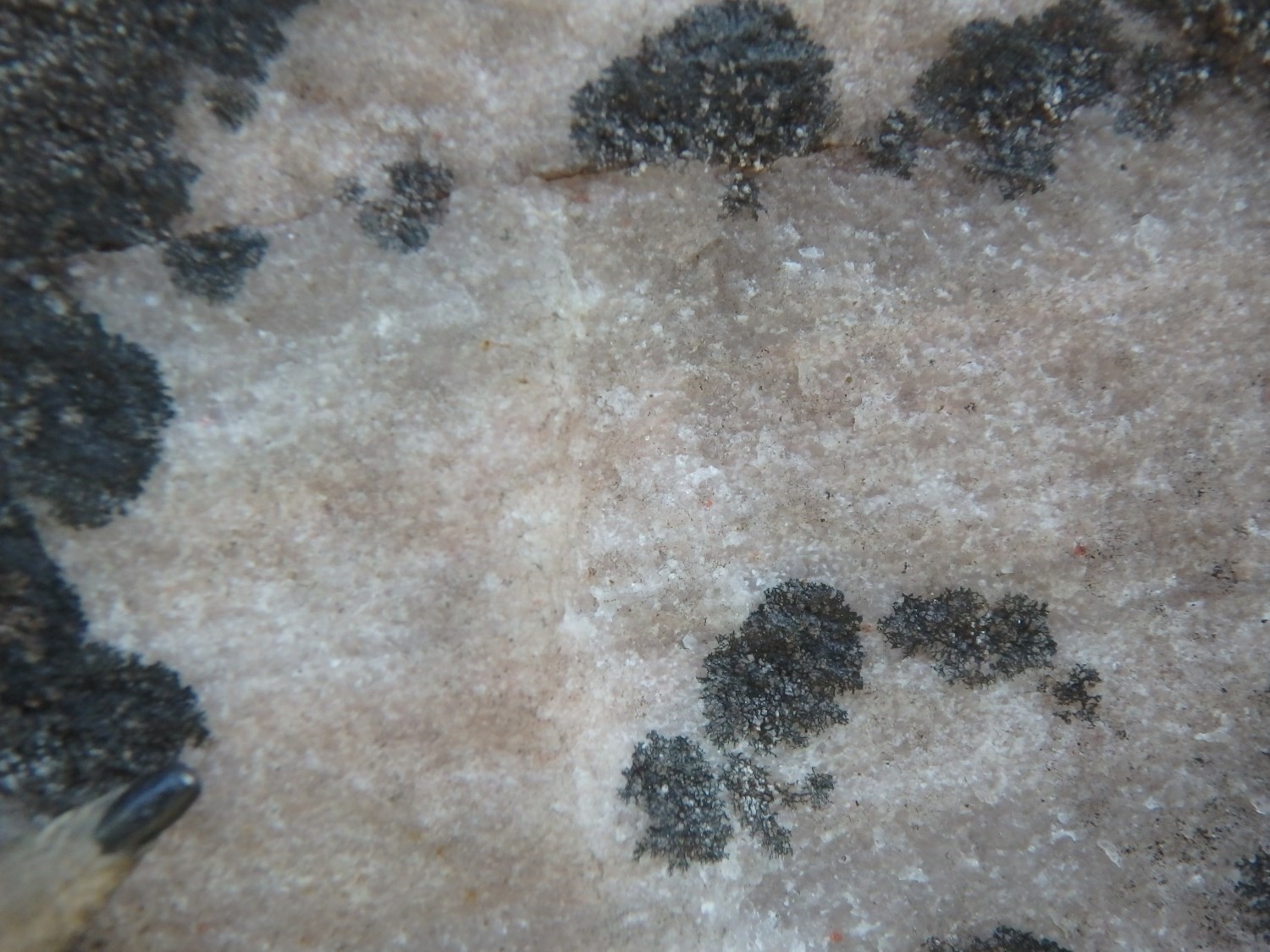 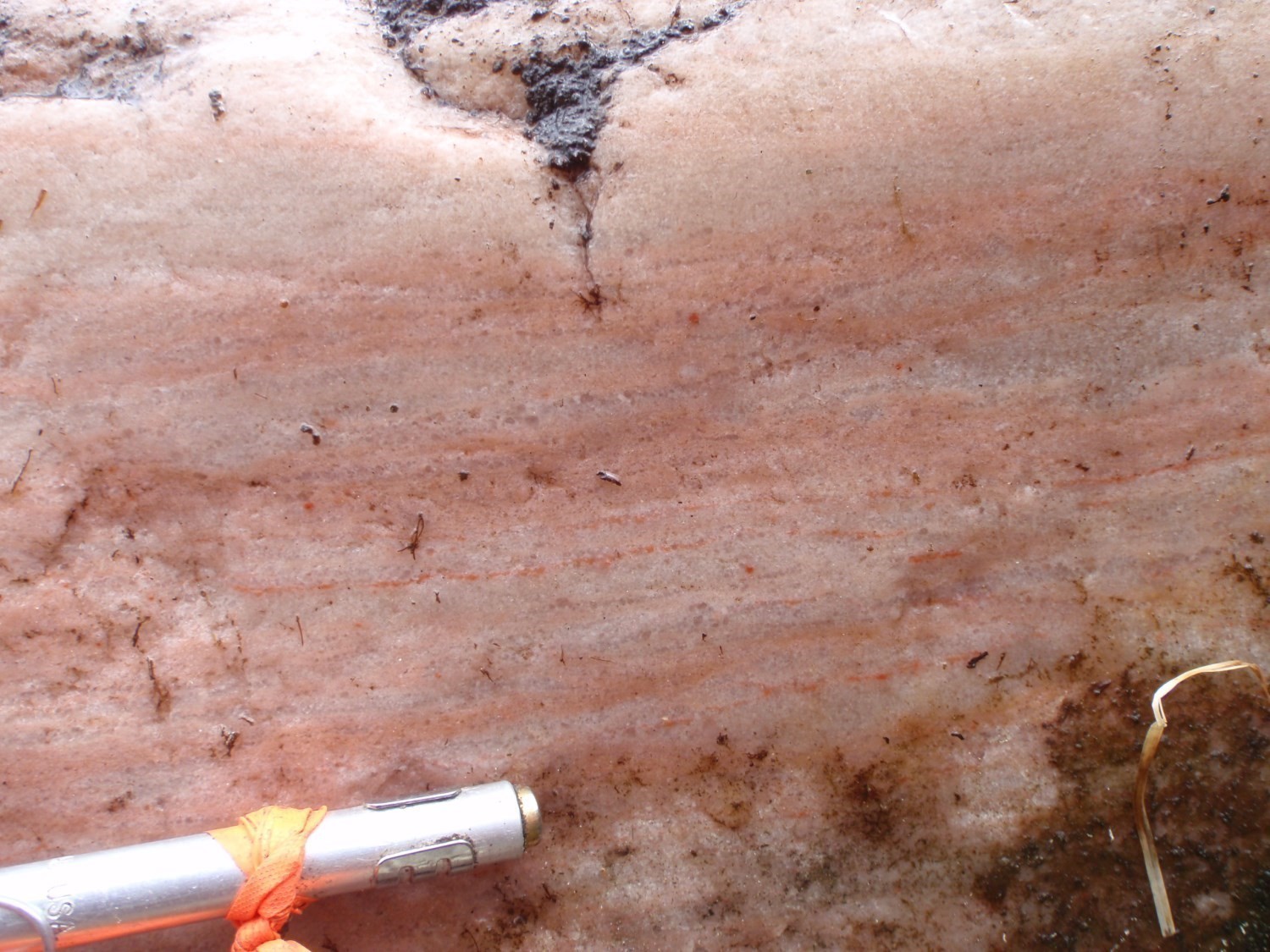 The stratotype of the Matoush Formation is described by Chown and Caty (1973) in the type section of the Indicator Formation (now Indicator Group) on the north side of the hill north of Conflans Lake:

The Matoush Formation is located throughout the Otish Basin. It occurs in two main discontinuous strips generally orientated NE-SW (northern portion of sheet 22M and southern half of sheet 23D) on the periphery of a regional syncline. These strips vary in width from approximately 1 km to 8 km. The thickness of the basal conglomerate sequence (Member A of Genest, 1989) varies from 15 to 390 m, and the thickness of the sandstone sequence (Member B of Genest, 1989) varies from 10 m to 181 m, reaching 310 m locally.

The Matoush Formation is cut by gabbro dykes and sills associated with the Otish Gabbro dated to 2169 Ma (Hamilton and Buchan, 2016; Miligragovic et al., 2016), giving it a minimum sedimentation age.