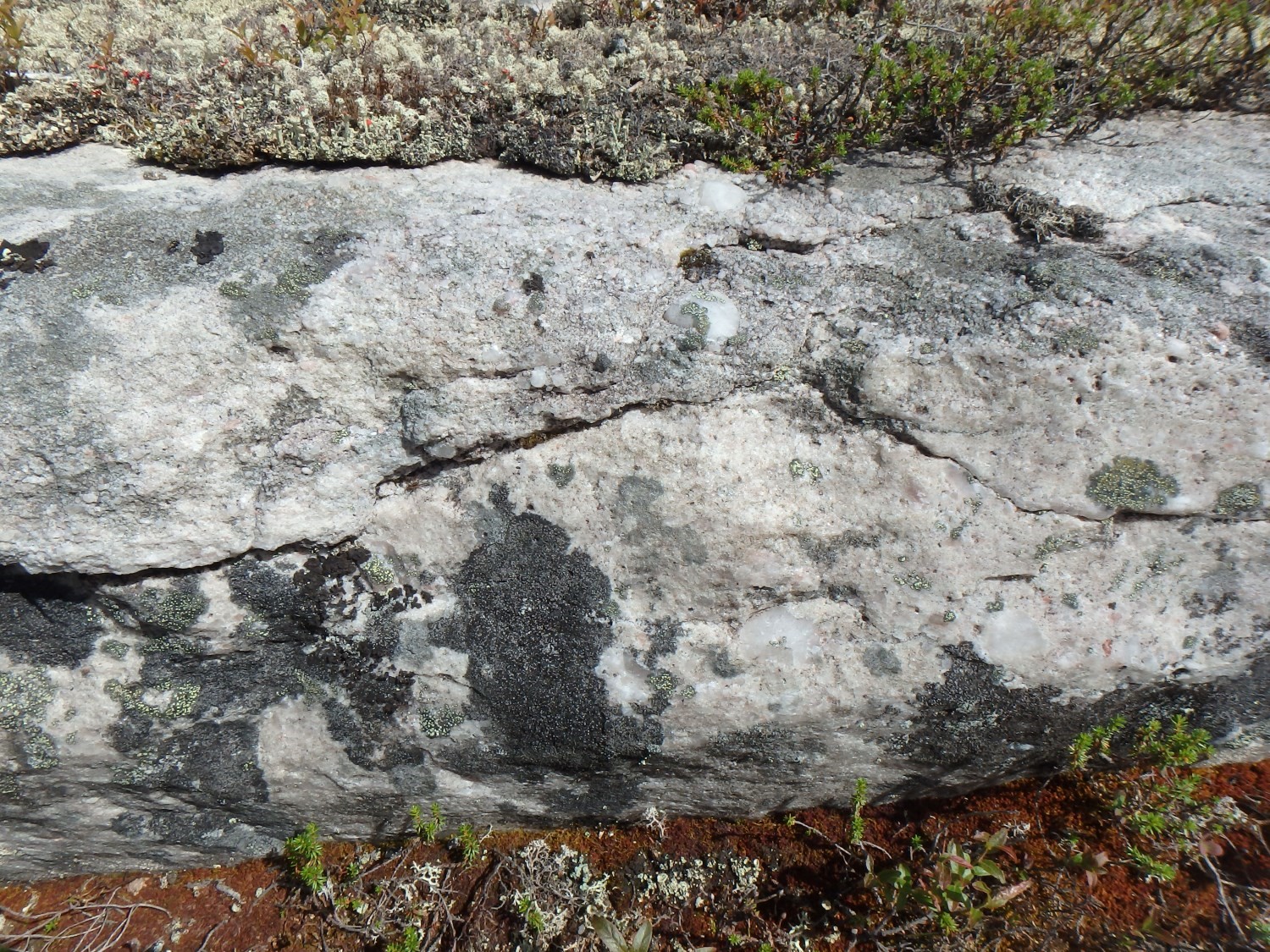 The term « Laparre Formation » was proposed by Genest (1989) and refers to a lake located in the central part of the Otish Basin (sheet 23D04). The Laparre Formation corresponds to the basal unit of the type section described by Chown and Caty (1973) for Member A of the Péribonca Formation, elevated to the rank of Péribonca Group by Genest (1989). Correlations between the different nomenclature used in previous work is summarized in the Otish Supergroup record, as well as in the summary table and the synthetic lithostratigraphic column of Genest (1989, pp. 21-53). Genest (1989) subdivided the formation into four distinct members, two conglomerate sequences (Members A and C), and two sandstone sequences (Members B and D). However, this division was not retained on Ministère‘s compilation maps (MNRF, 2010a-c).

The Laparre Formation consists of conglomerate and sandstone sequences. The following description is mainly from Genest (1989). 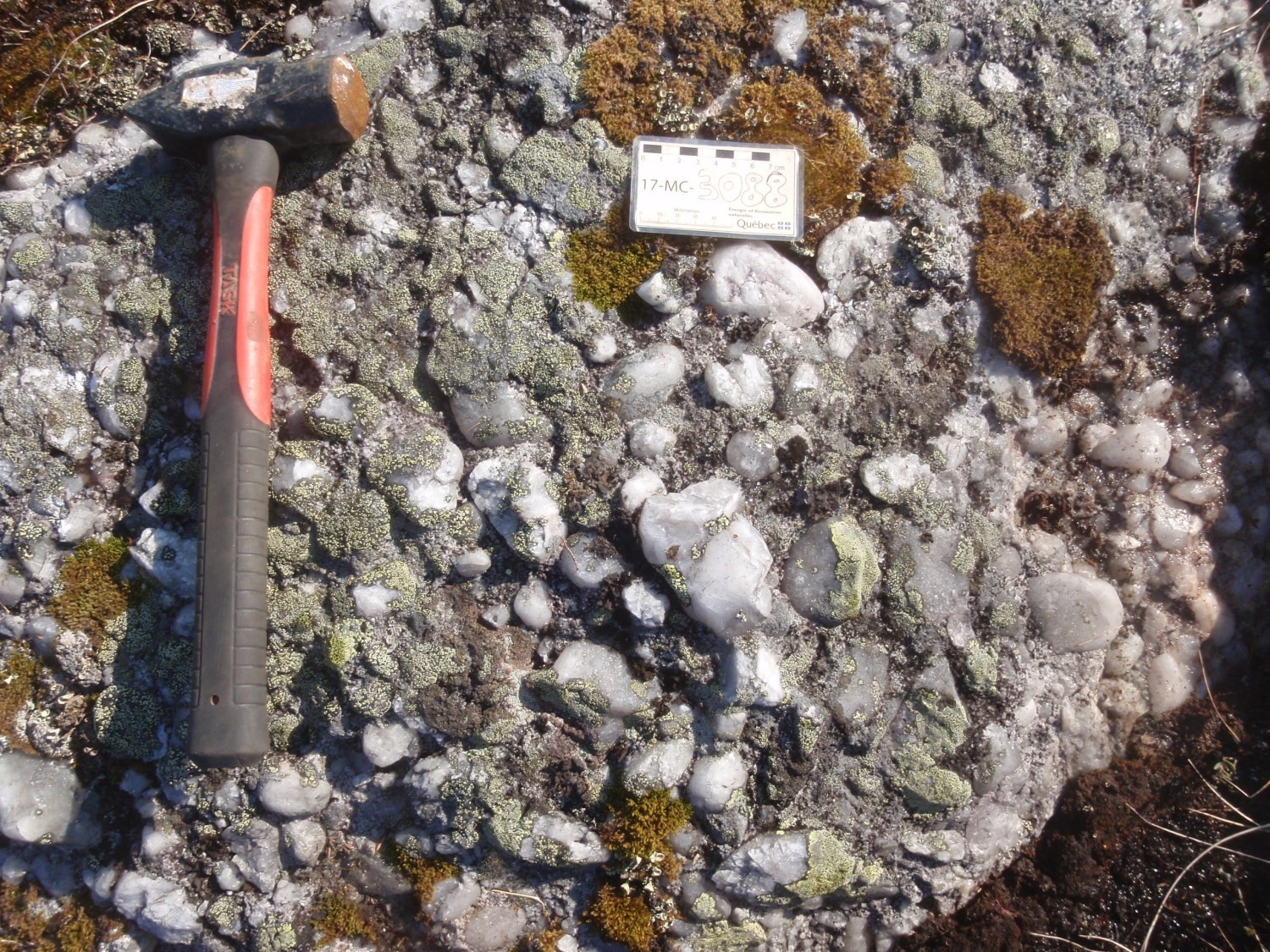 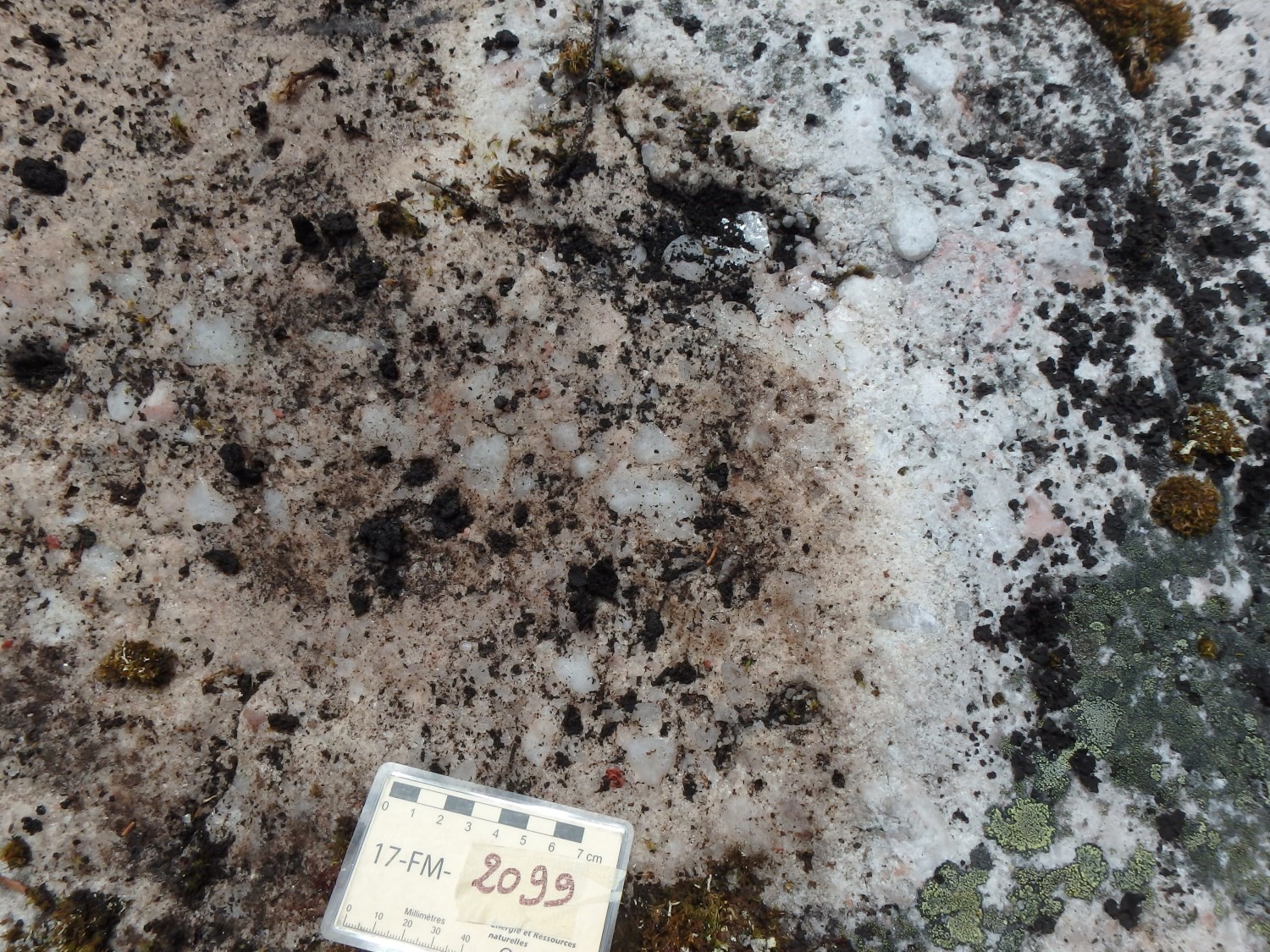 The basal sequence consists mainly of polymictic conglomerates alternating with pebble sandstone and some sandstone lenses. In outcrops, conglomerate generally forms channels that cut the lower unit, as evidenced by the presence of sandstone and red mudstone fragments from the underlying Shikapio Formation. Conglomerate has a feldspathic composition and contains several clast types including quartz, granite, pegmatite, graphic micropegmatite, jaspilite, blackish chert, red chert, quartzitic sandstone and mudstone. Clasts are subangular to rounded and can reach 20 cm in size. The main characteristic of conglomerate is the presence of jaspilite fragments, which, because of its preservation level and its red-brick colour, is a good stratigraphic marker. Secondary hematitization usually confers an orange shade to K-feldspar grains. 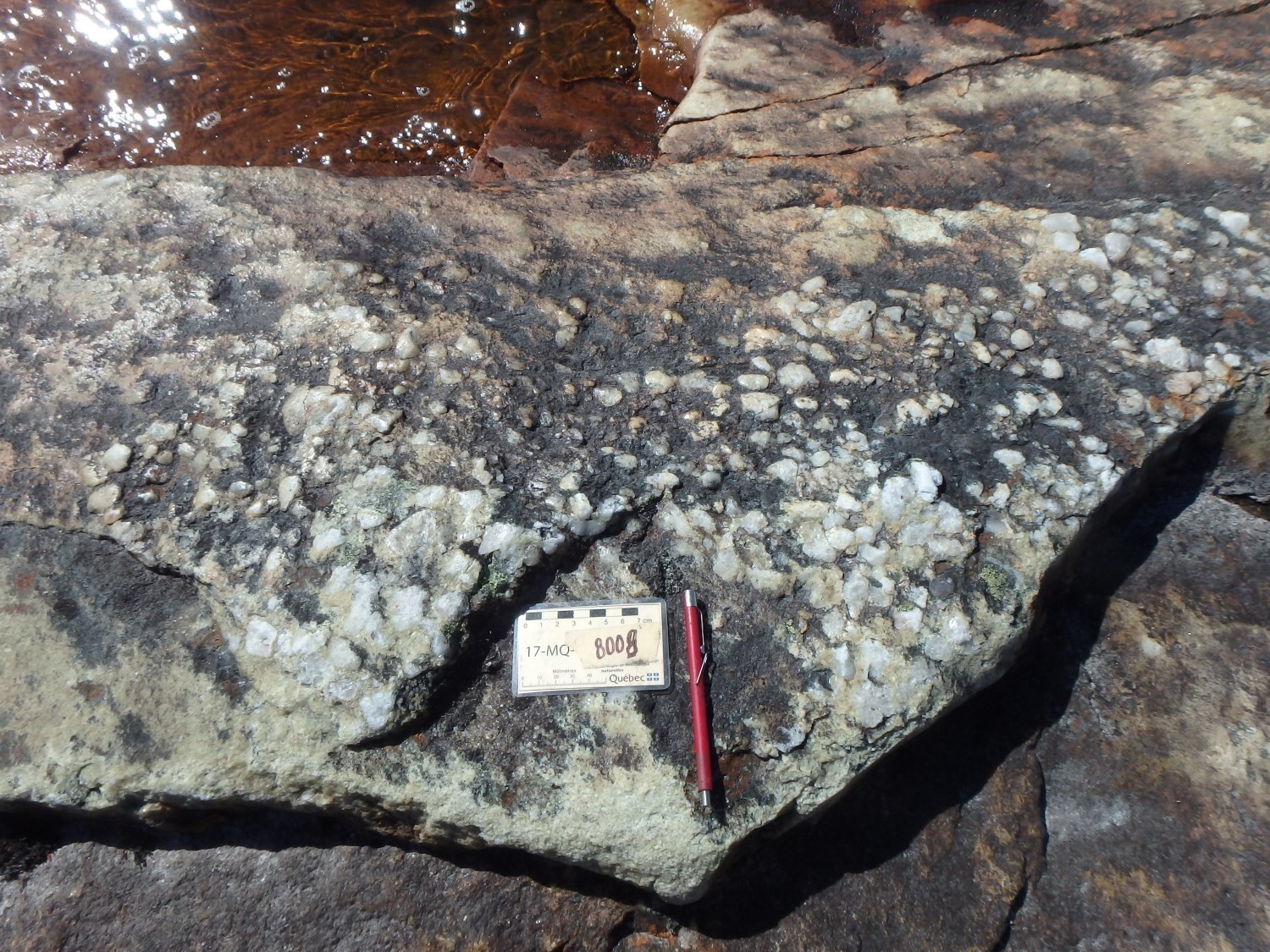 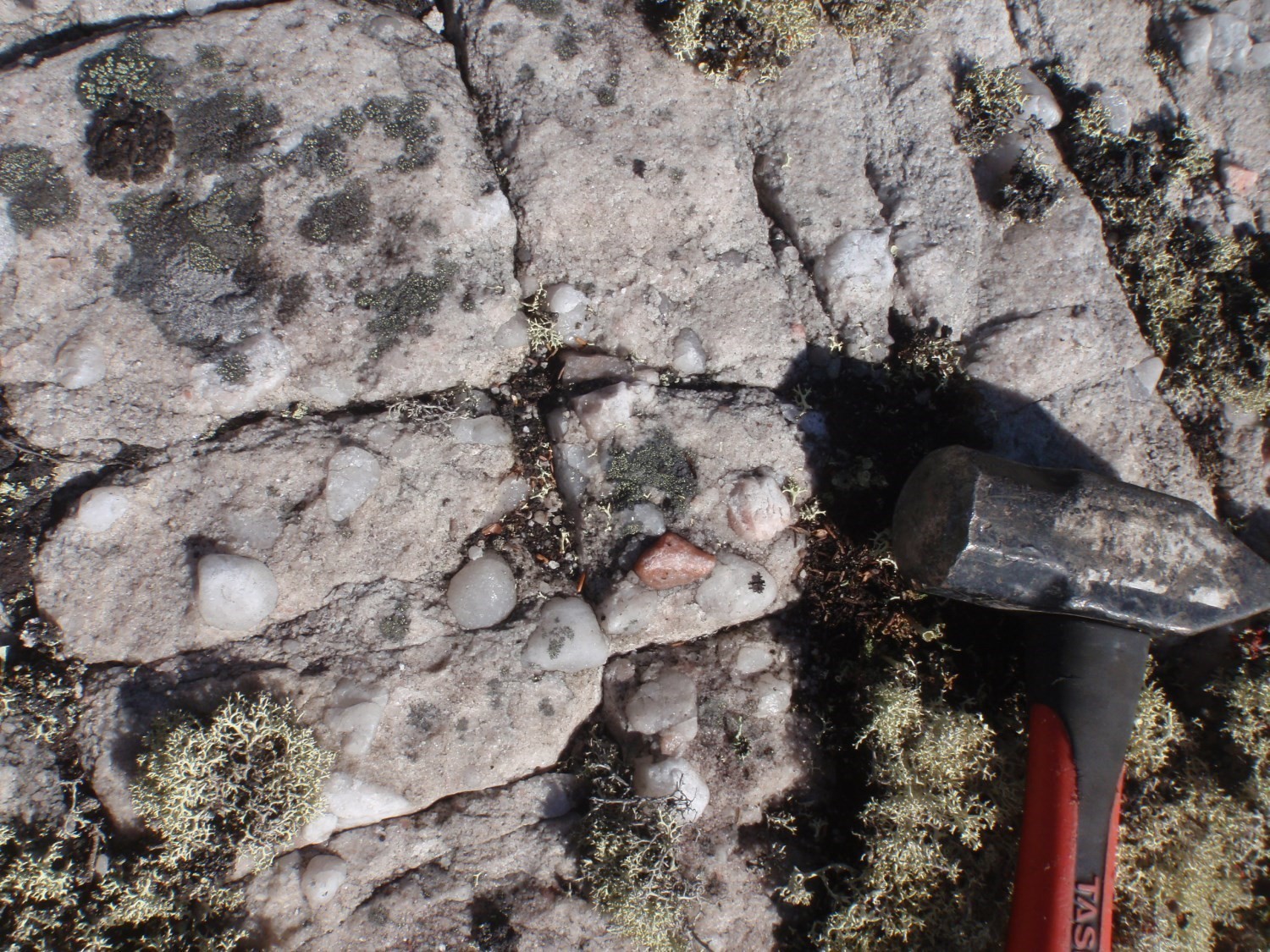 The basal conglomerate sequence gradually moves to the overlying sandstone sequence. A few beds of pebble sandstone have an anhydrite-magnesite cement added to the siliceous cement generally observed. Sandstone is feldspathic to quartzitic, well sorted and composed of subrounded grains. Ferruginous chert fragments are scattered in sandstone. K-feldspar is partially altered to illite and kaolinite, increasing the clay fraction. The sandstone sequence is overlain by a new conglomerate sequence whose detrital fraction is similar in composition to that of basal conglomerate. However, north of Margat Lake (SW corner of sheet 23D06), clast size and morphology, the abundant arkosic matrix and the lack of well-defined beds suggest different sedimentary dynamics. 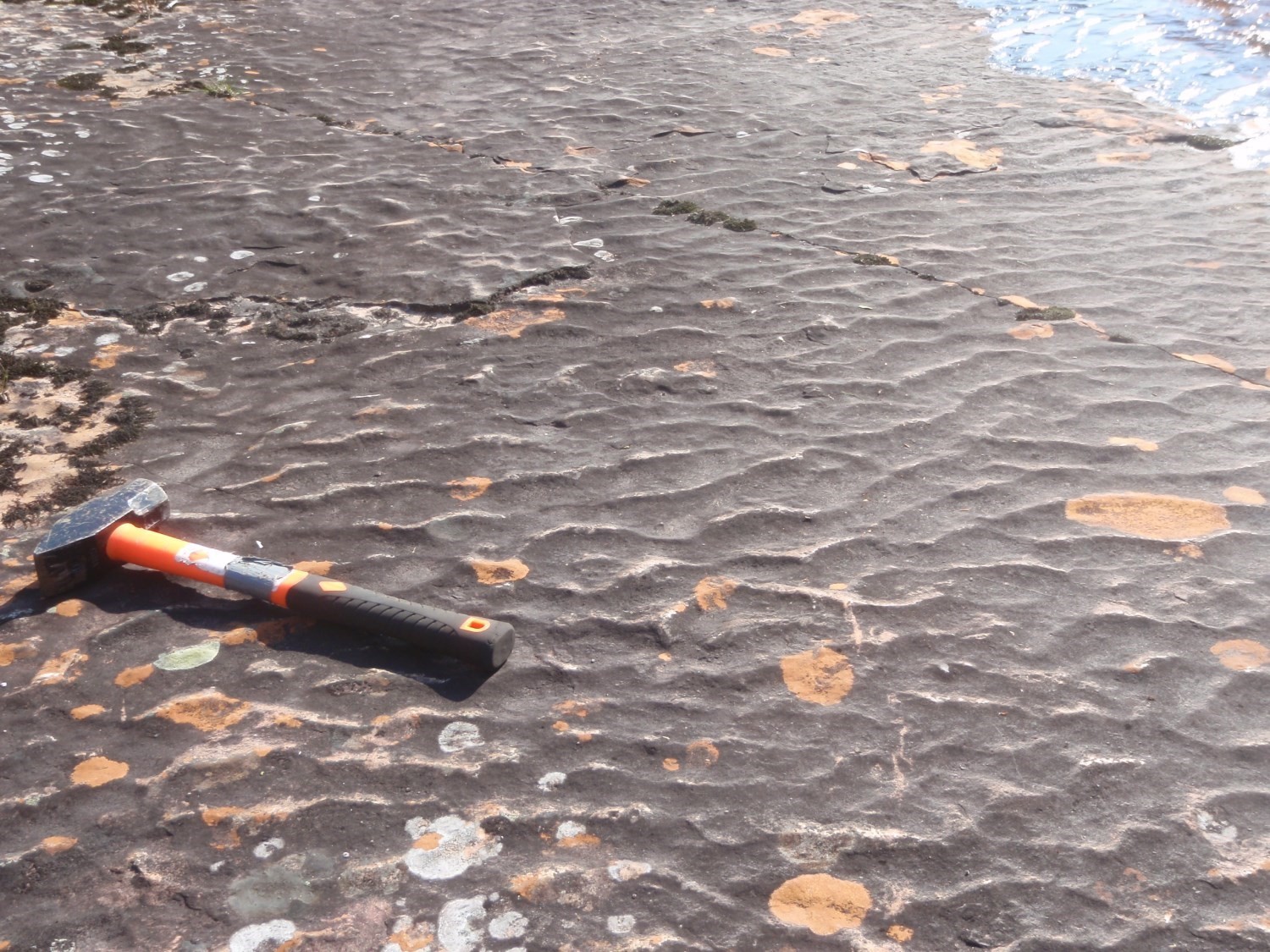 Once again, conglomerate transitionally changes to a thick sequence of laminated sandstone containing pebbles at the base, and whose grain size decreases towards the top (fining-upward). These sandstones are characterized by the presence of dolomitic cement, the appearance of plagioclase grains (albite and oligoclase) and perlitic rhyolite fragments, and the rhythmicity of particle size in couplet laminae. Occasional gypsic cement and secondary chert-silica cement are also observed. Grains are subrounded to rounded in medium to very coarse-grained laminated sandstone, and angular to subrounded in fine to very fine-grained sandstone. Orthose and microcline can make up 20% of the terrigenous fraction. The main accessory minerals are pyrolusite and hematite. The matrix of sericitized secondary clay generally represents <10% of the rock.

In their type section of Member A of the Péribonca Formation (now Péribonca Group), located along a small creek valley on the north side of the main range of the Otish Mountains, Chown and Caty (1973) describe only the thick upper sandstone sequence:

The Laparre Formation represents the majority of the area covered by the Péribonca Group (140 km by 10-30 km), with the exception of a NE-SW strip ~80 km long in the NE portion of the basin corresponding mainly to the overlying Gaschet Formation. The thickness of the basal conglomerate sequence of the formation is the least important (5-165 m), while the summital sandstone sequence is the thickest (50-371 m). The thickness of the two median sequences varies from <20 m to >250 m.

The Laparre Formation is cut by gabbro dykes and sills associated with the Otish Gabbro dated to 2169 Ma (Hamilton and Buchan, 2016; Miligragovic et al., 2016), giving it a minimum sedimentation age.