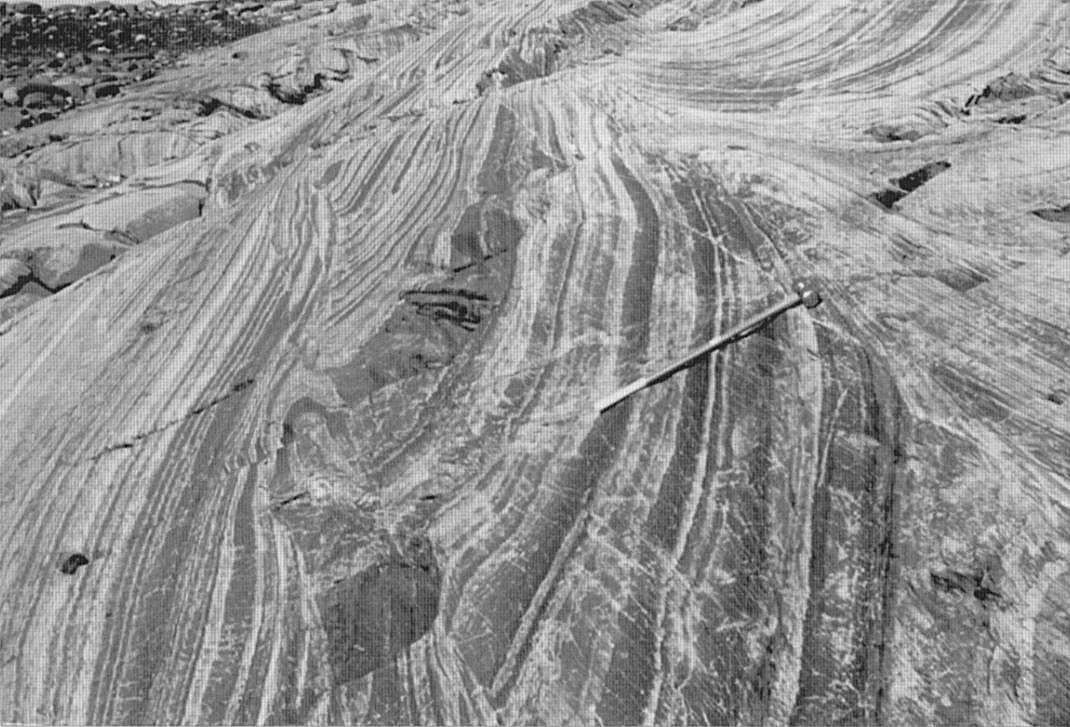 The Upper Baby member represents an allochthonous volcano-sedimentary unit located in the lower part of the Koksoak Group (Clark and Wares, 2004). It consists of alternating mudstone,  siltstone and sandstone having a rhythmic structure, as well as quartzitic or feldspathic sandstone (turbidites) and, in the upper part, local occurrences of iron-bearing rocks. The composition of the Upper Baby member is generally identical to that of the Lower Baby member. It differs from the latter only in its stratigraphic position relative to iron-bearing rocks of the Middle Baby member and volcanic rocks of the Hellancourt Formation (Sauvé and Bergeron, 1965; Wares and Goutier, 1990). The Upper Baby member comprises six informal units:

The Upper Baby member contains polymetallic Cu-Zn-Co-Ag-Au mineralization hosted in rhythmites as well as in Algoma-type iron formations located in flyschoid sediments near the top of the unit (Wares et al., 1988; Barrett et al., 1988; Clark and Wares, 2004; Wares and Goutier, unpublished report). It should be noted that iron formations of the Baby Formation were previously grouped within the Sokoman Formation in the Lake Superior type (Gross, 1995; Clark and Wares, 2004). Cu-Ni ± Co ± PGE mineralization is hosted in glomerophyric gabbro sills of the Gerido Intrusive Suite, emplaced in sulphide-bearing metasedimentary rocks (iron formations) of the Upper Baby member in the northern part of the orogen (Wares and Goutier, 1989 and 1990; Clark and Wares, 2004). 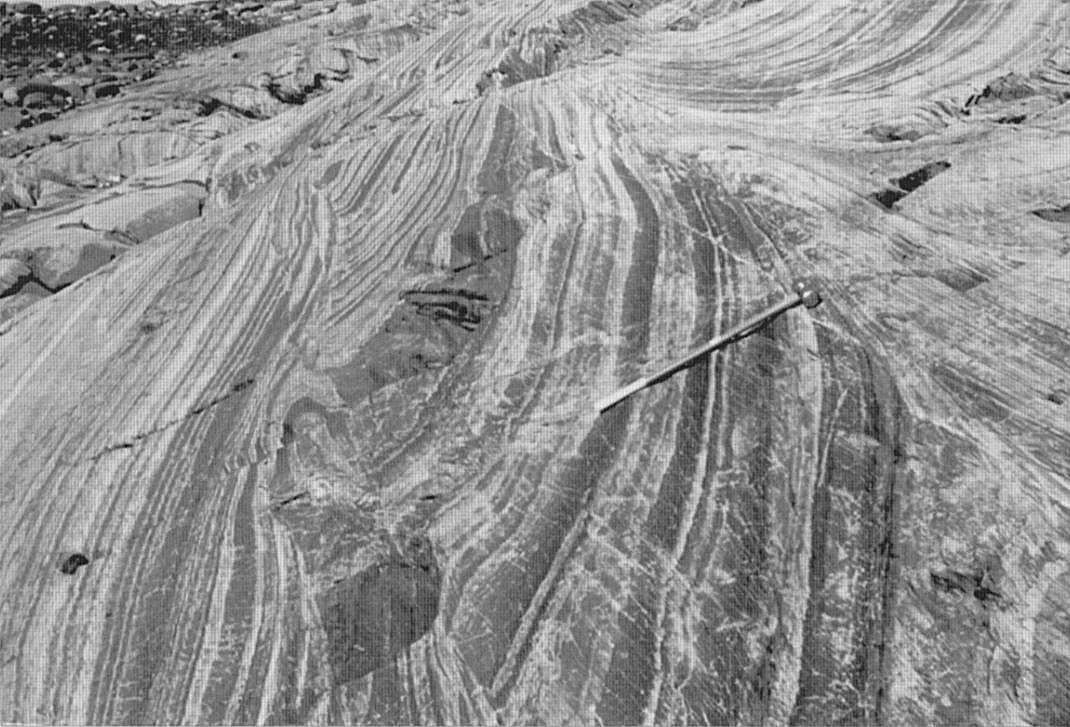 Unit pPbb(s)1 is the largest unit of the Upper Baby member in the northern Labrador Trough. It forms 10 to 60 m-thick layers inserted between or in contact with gabbro sills (Gerido Intrusive Suite). The unit consists of mudstone, siltstone, fine sandstone, grey or black slate, phyllite and micaceous schist. These rocks are usually grey, greenish grey or green in fresh exposure, slightly less dark in altered surface, finely stratified (1-5 cm) and laminated. The different lithologies are generally interbedded and display a rhythmic structure (rhythmites). Interbedded quartzitic sandstone is observed locally (Sauvé, 1956 and 1959; Hashimoto, 1964; Bérard, 1965; Sauvé and Bergeron, 1965; Clark, 1978, 1979, 1980, 1988; Bélanger, 1982; Goulet, 1995). The most common sedimentary structures consist of ripples, small-scale (1 cm) cross bedding and syn-sedimentary folding. In places, normal sorting is observed in sandstone beds. Near the top of the unit, grey or black slate, commonly pyritic, is observed in places (Sauvé 1959; Bérard, 1965; Sauvé and Bergeron, 1965). Moreover, in the Lac Gerido area, the upper part of the Upper Baby member locally contains black shale (Sauvé and Bergeron, 1965).

In the Hérodier Lake and Koksoak River areas, rocks of unit pPbb(s)1 have a coarser grain size towards the top and gradually change to quartzitic sandstone of unit pPbb(s)2 (Clark, 1980).

Unit pPbb(s)2 consists of quartzitic sandstone and interbedded mudstone, siltstone and conglomerate (Clark, 1978, 1980). In the Hérodier Lake and Koksoak River areas, it is estimated to be 15 to 30 m thick. Quartzitic sandstone occurs in beds 0.1 to 3 m thick, increasing in thickness towards the top. It is generally grey in altered surface, locally grey to greenish grey or white, and coarse to very coarse grained (1-3 mm). Cross bedding and sorting are observed in places. Mudstone interstratifications are usually 0.3 m to several metres thick. The proportion of mudstone increases towards the top of the unit where the bed thickness locally reaches 12 m. The thickness of grey siltstone beds varies from 0.3 to 1.2 m. Sorting and cross bedding are reported locally. Conglomerate is observed locally in unit pPbb(s)2 as 0.3 to 12 m-thick beds interbedded with quartzitic sandstone. It is generally composed of rounded quartz pebbles (1 to 5 cm in diameter) in a quartzitic sandstone matrix. More rarely, it contains mudstone fragments as angular sheets up to ~1.5 m long (Clark, 1978, p. 18).

Further north, in the Larochelle Lake area (sheet 24K12), unit pPbb(s)2 consists mainly of quartzitic sandstone. The latter usually occurs in beds a few metres to ~75 m thick. It is generally quite pure, but may locally contain significant amounts of chlorite and muscovite (Sauvé, 1959).

Unit pPbb(s)3 consists mainly of basalt flows associated with gabbros and minor layers of mafic tuff (Clark, 1978; Bélanger, 1982). These rocks are green to dark green or grey to greenish grey, fine grained and have a brownish alteration patina. In the area west of Hérodier Lake, basalt flows are massive and estimated to be 30 m thick. They are interstratified with pillow flows (Clark, 1978). Basalt is locally porphyritic and contains centimetric plagioclase phenocrysts (Bélanger, 1982). In places, basalt changes to a medium-grained gabbroic rock. It is, however, difficult to distinguish from microgabbros.

Unit pPbb(s)5 consists mainly of micaceous schists with some minor quartzite intercalations visible locally (Berard, 1959; Clark, 1978). This unit generally overlies iron-bearing rocks of the Middle Baby member. In the Feuilles Lake area (sheets 24K12 and 24K13), its thickness is estimated at 300 m SE of Raymond Lake (Bérard, 1959). A few occurrences of mica schist have been mapped in the Hérodier Lake area (Clark, 1978). Micaceous schist is generally black and composed of biotite, muscovite and chlorite in variable amounts. Quartzite beds range in thickness from a few metres to ~75 m. Quartzite is generally quite pure and contains minor amounts of biotite. In places, it may contain significant amounts of chlorite and muscovite.

Unit pPbb(s)6 is located in the Jogues Lake area. It consists of massive dolomite, buff-coloured in altered patina, cut by numerous quartz veins. According to Hashimoto (1964), dolomite is interbedded with phyllite and slate.

Unit pPbb(s)7 consists of dark grey to black, graphitic mudstone or slate. In the Hérodier Lake and Koksoak River areas, this unit is overlying iron-bearing rocks of the Middle Baby Member and forms ~5-10 m thick layers within basaltic-gabbroic sequences. Locally, the rock is rusty at the surface due to the presence of pyrite. The latter usually occurs as thin laminae parallel to bedding (Clark, 1978 and 1980).

The Upper Baby member belongs mainly to the Gerido Lithotectonic Zone as defined by Clark and Wares (2004). It extends for over 200 km from Feuilles Lake (sheet 24K13) to Jogues Lake (sheet 24F02). Its thickness is estimated to be between 450 m and 700 m in the area NW of the Koksoak River (Sauvé and Bergeron, 1965; Clark, 1979; Goulet, 1995). In the Holannah and Crochet lakes areas (sheet 24K04), Wares and Goutier (1989) estimated a minimum apparent thickness >500 m. Further east, in the area NW of Thévenet Lake, the minimum apparent thickness of the Upper Baby member is estimated at 800 m. According to Wares and Goutier (1990), this thickness may be less, as the estimate does not take into account the presence of gabbro sills, thrust faults and folding in this area.