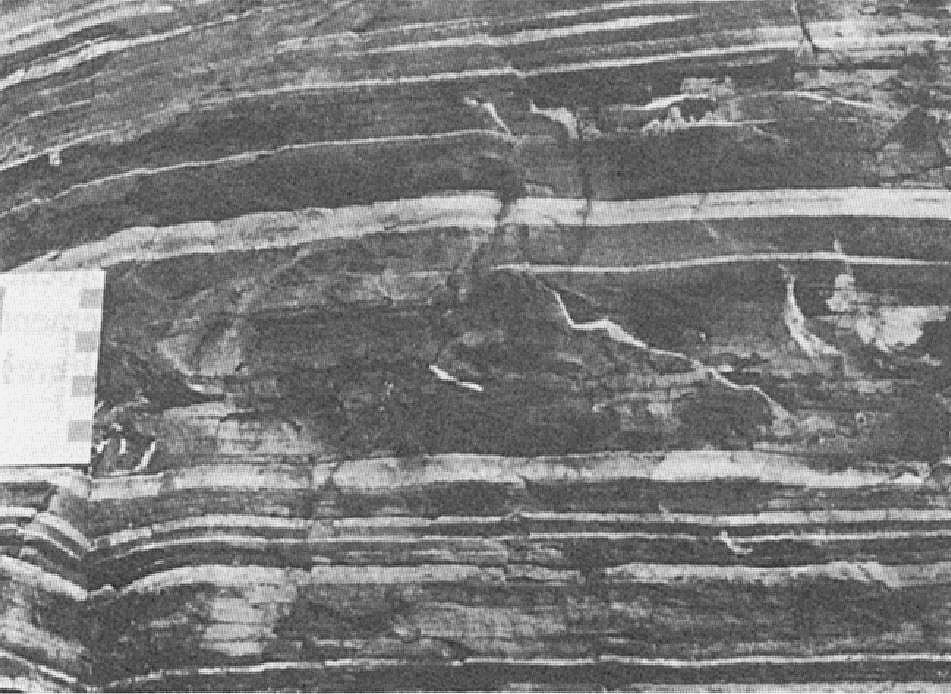 The Middle Baby member is an allochthonous volcano-sedimentary unit belonging to the lower part of the Koksoak Group (Clark and Wares, 2004). It represents a marker unit stratigraphically located between turbidites of the Lower and Upper Baby members (Sauvé and Bergeron, 1965; Goulet, 1995). The Middle Baby member consists essentially of silicate facies, carbonate facies and silicate-carbonate facies, oxide facies and sulphide facies iron formations. These various facies commonly form distinct stratigraphic units, but their stratigraphy varies from one area to another. In places, the contact between two adjacent iron formations of distinct composition is gradual or interbedded (Clark, 1988). The Middle Baby member also contains lower amounts of mudstone and slate, locally graphitic and pyritic. In addition, it locally contains mafic volcanic rocks (basalt, chloritic schist). The rocks of the Middle Baby member are relatively low in iron compared to those of the Sokoman Formation. The iron content is ~22% in silicate facies iron formations, 15% in the carbonate facies and 13% in the sulphide facies (Clark, 1988).

The rocks of the Middle Baby member underwent recrystallization that began during diagenesis and continued during metamorphism. Most are metamorphosed to the greenschist facies and are strongly deformed in the Hérodier Lake area (Clark, 1988). Their emplacement is related to a deep and quiet submarine depositional environment. The origin of these rocks is thought to be partly related to volcanic activity and hydrothermal vents (Clark, 1988; Wares et al., 1988).

This undivided unit consists of silicate facies, oxide facies, carbonate facies, silicate-carbonate facies and sulphide facies iron formation, grunerite schist, pyritic mudrock and metachert interstratifications (Sauvé, 1956 and 1959; Sauvé and Bergeron, 1965; Bélanger, 1982). These rocks are present in variable amounts, but carbonate and silicate-carbonate facies iron-bearing rocks represent the most abundant lithologies. According to Sauvé and Bergeron (1965), carbonate facies rocks are locally pyritic. Iron-bearing rocks are generally finely stratified and form laminae ≤1 mm thick. They vary considerably in appearance and composition and change gradually from one to another. Grunerite schist and pyritic mudrock occur in minor amounts. 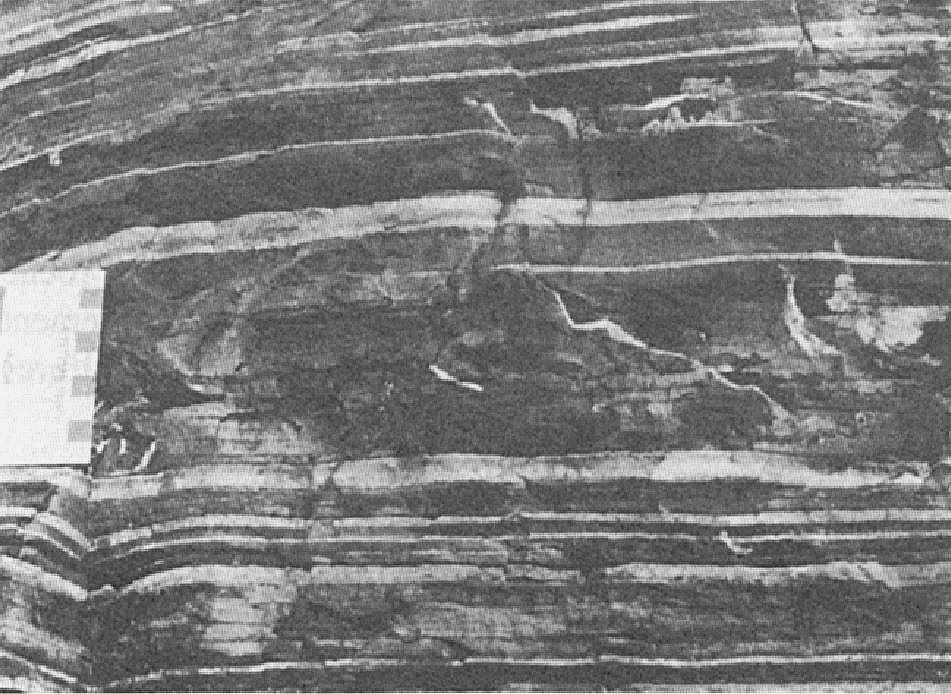 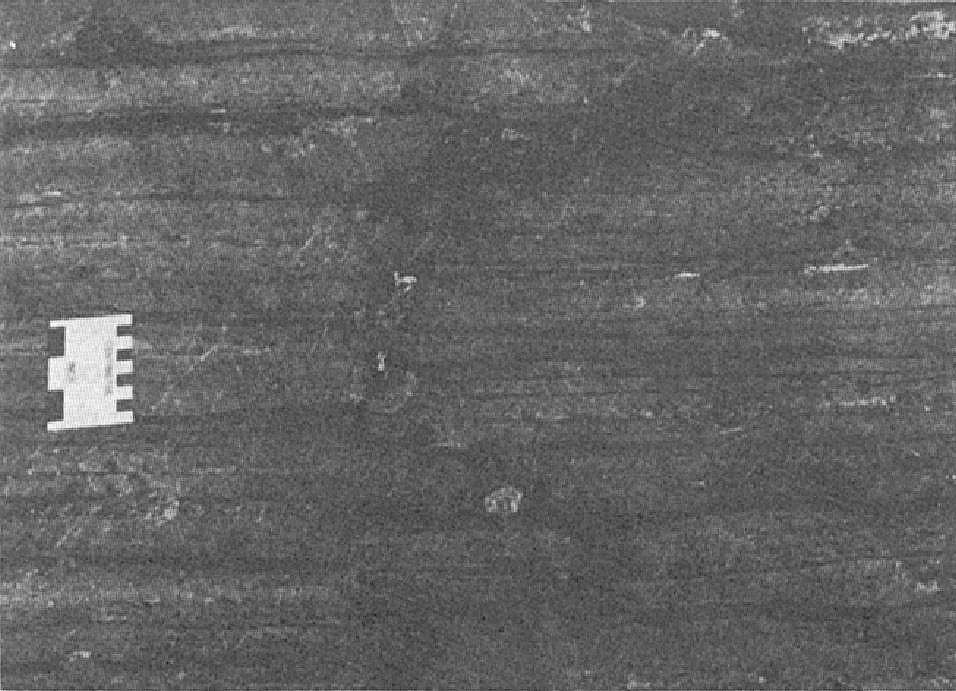 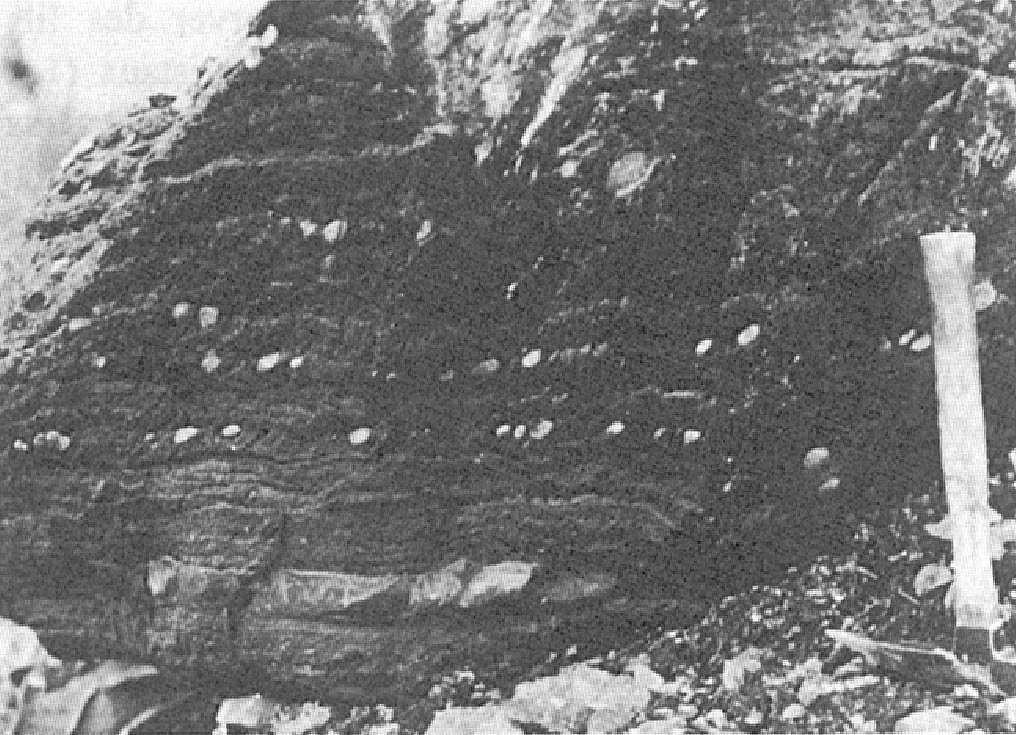 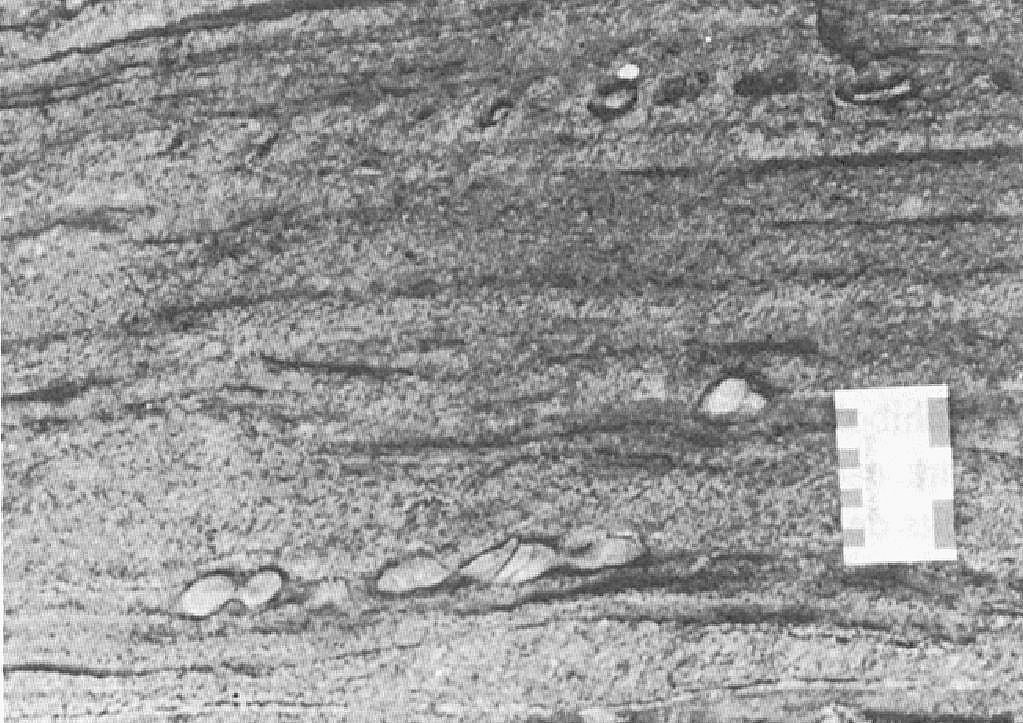 Unit pPbb(m)1 is formed of silicate facies iron formations (Clark, 1978, 1988; Dressler, 1979). It consists of interstratified (0.5-20 cm) quartz-carbonate-magnetite ± stilpnomelane ± grunerite ± minnesotaite ± chlorite rocks, metachert and locally chloritic schist (Hashimoto, 1964; Clark, 1978, 1979, 1980, 1988). Iron-bearing beds are fine grained and locally fissile or schistose. They have a bluish black, dark brown to black, purple-brown or reddish brown alteration patina and are in negative relief with respect to metachert beds. In fresh exposure, these beds are greenish grey or dark grey. The silicate facies is characterized by the presence of grunerite, which occurs as fine needles (locally up to 2 cm long) or rosettes, but may locally form beds (Hashimoto, 1964; Clark, 1978; Dressler, 1979). It may or may not be accompanied by stilpnomelane or may occur in thin beds within a stilpnomelane-bearing sequence (Clark, 1980). The rock may or may not be magnetic. Very magnetite-rich laminae, 2 to 3 mm thick, are observed locally (Clark, 1979 and 1980). With the exception of bedding, few sedimentary structures are observed by Clark (1978) and Dressler (1979). Metachert beds are common and may form 5 to 70% of the rock. They are grey or greenish grey in  fresh surface and reddish to grey in altered surface. Metachert beds are strongly boudinaged (Clark, 1978, 1988). Locally, silicate facies rocks may include carbonate facies or sulphide facies iron formation beds or occurrences (Clark, 1978, 1988). 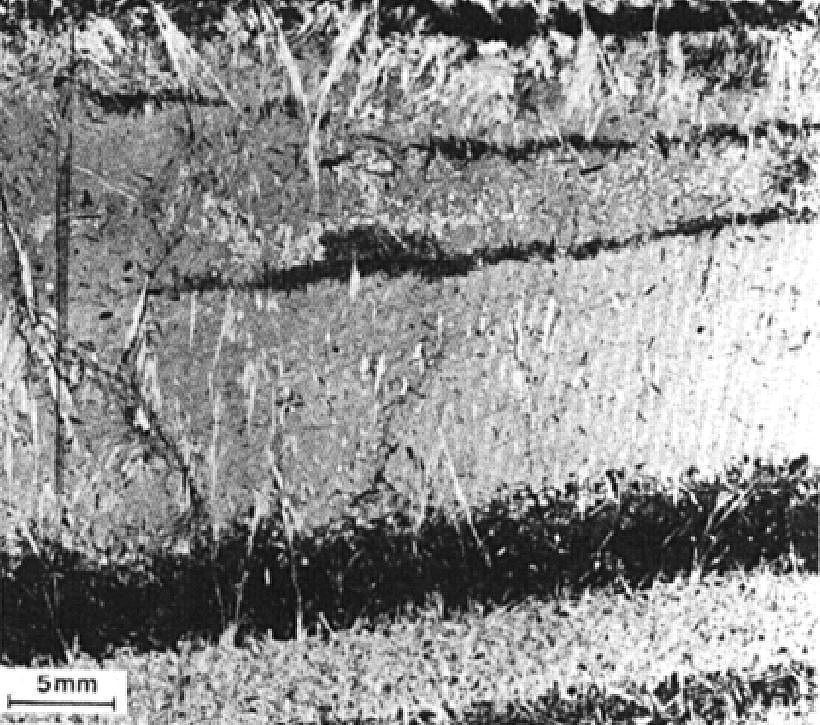 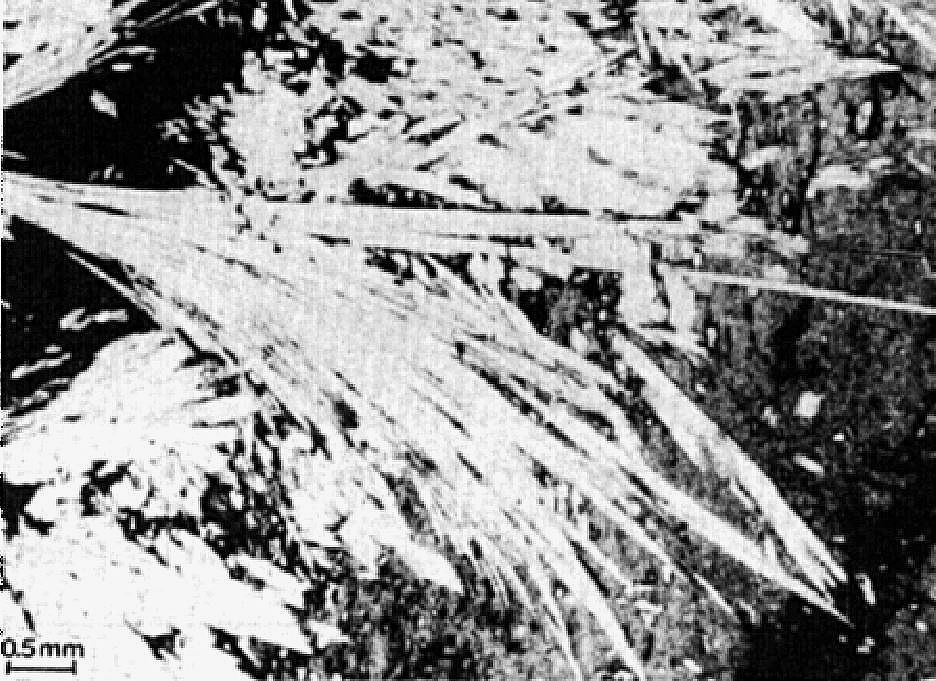 In thin sections, silicate facies iron formation is generally composed of quartz, carbonate (dolomite-ankerite or siderite) and magnetite, with variable amounts of stilpnomelane, grunerite, minnesotaite and chlorite (Dressler, 1979; Clark, 1988). Minor amounts of actinolite and anthophyllite are also observed. Metachert comprises 10 to 15% dolomite-ankerite. Sedimentary laminae are characterized by variations in the proportion of silicates and carbonates (Clark, 1988). 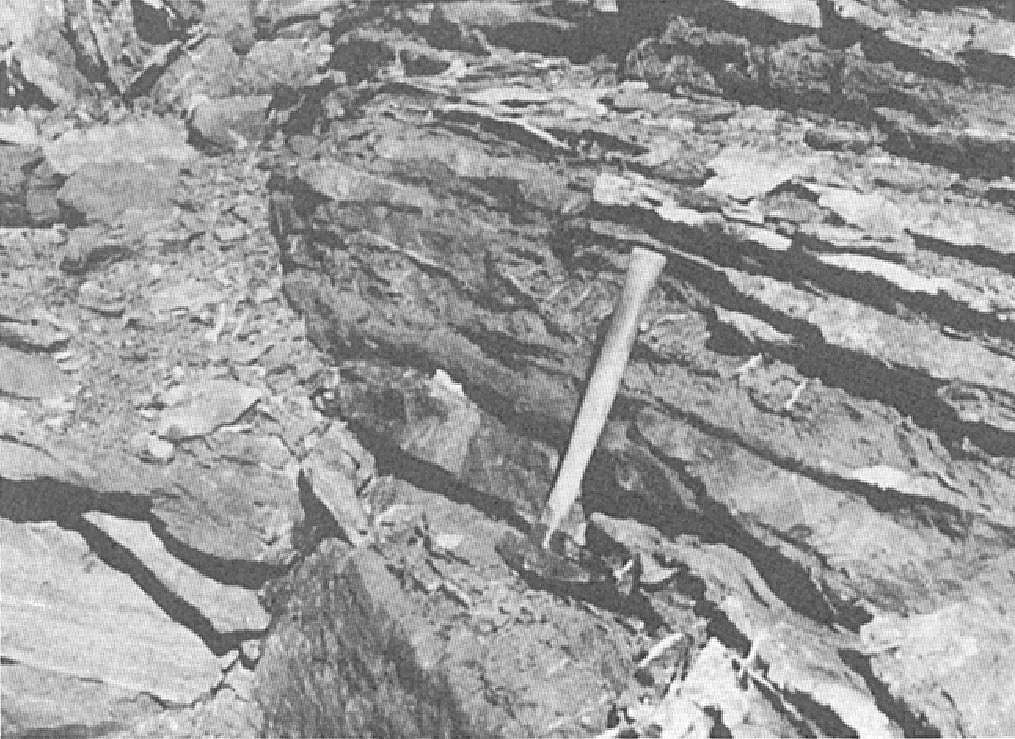 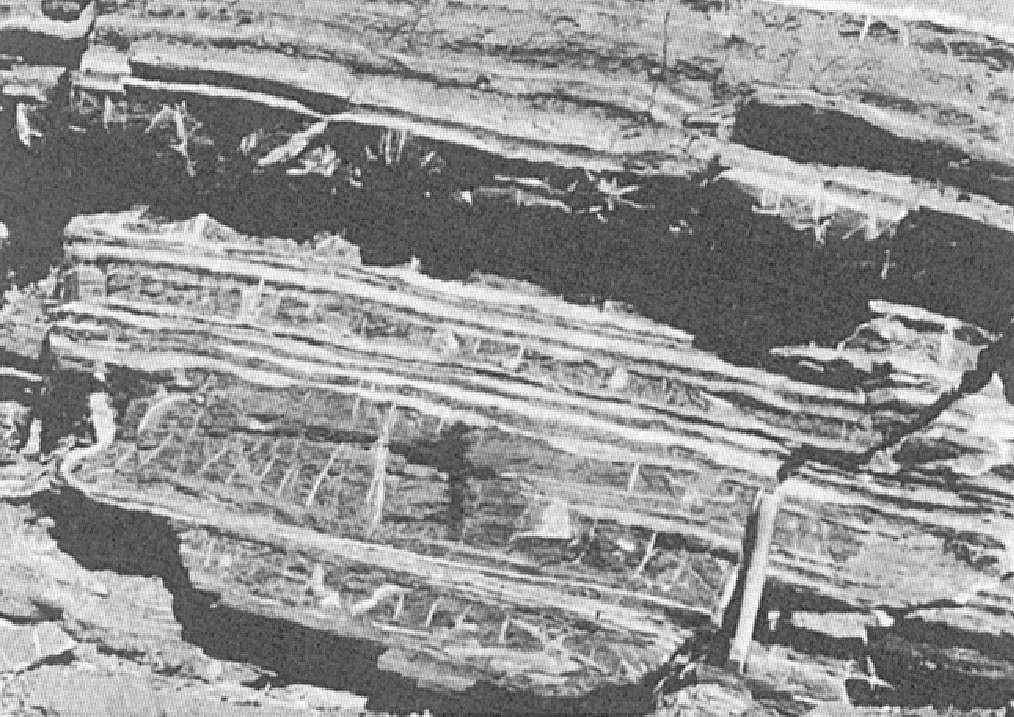 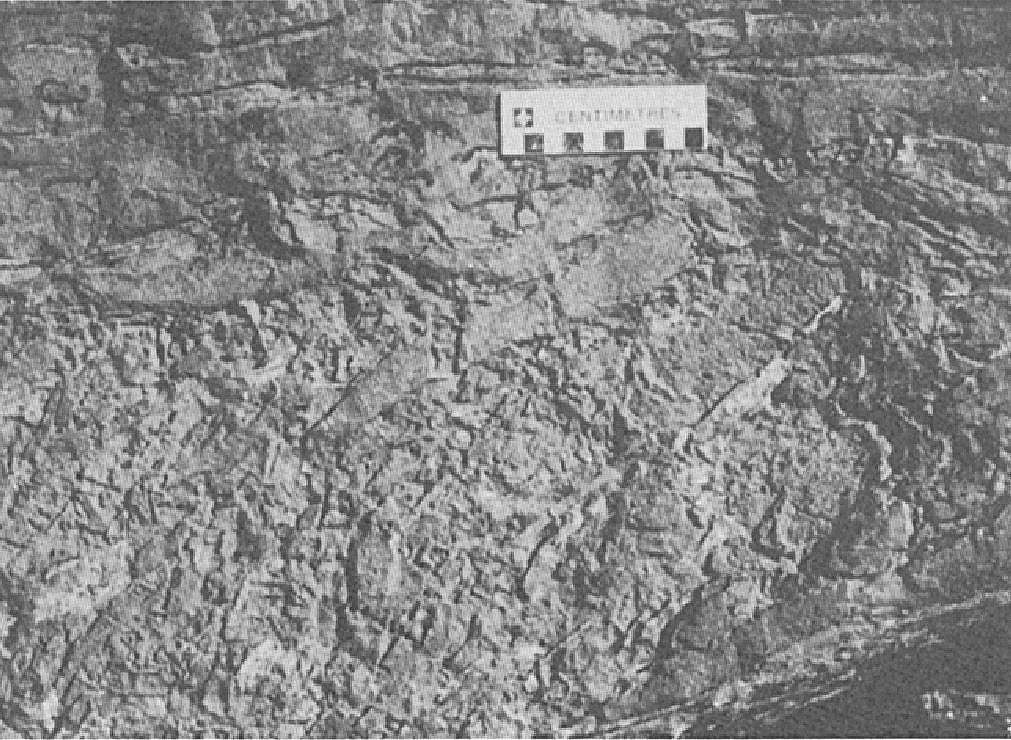 Metachert occurs as laminae or thin beds that can form ≥50% of the rock. Locally, metachert beds contain disseminated grains of ferruginous carbonate (Clark, 1978, 1988). Unit pPbb(m)2 may also include ferruginous dolomite (Clark, 1978). Intraformational breccia beds are common at the base of the unit near the south bank of the Koksoak River (Clark, 1988). This breccia is thought to be the result of syn-sedimentary slides. It is formed by centimetric, angular tabular fragments of metachert or carbonate in a carbonate matrix. 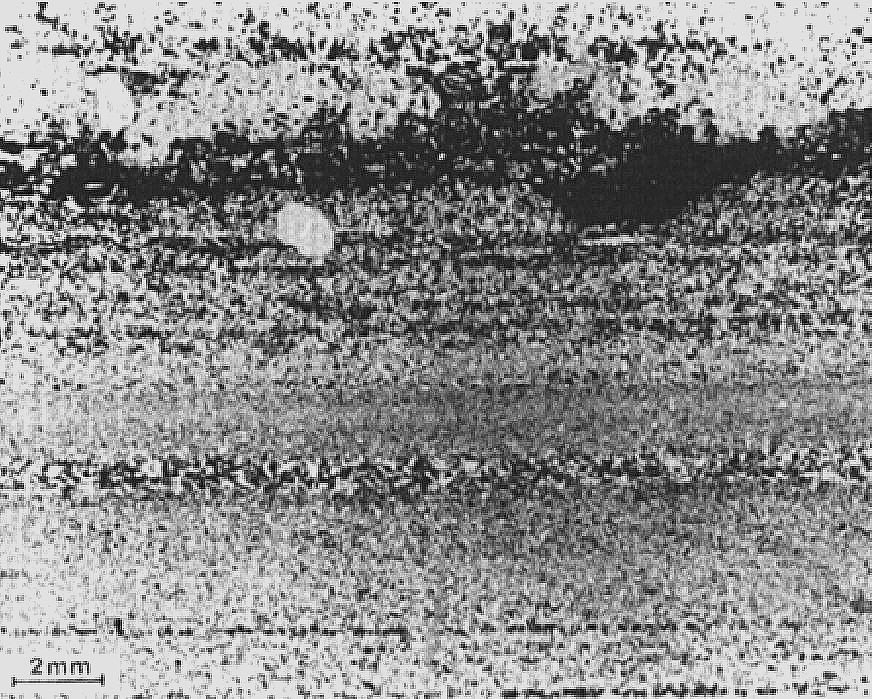 Unit pPbb(m)3 consists of sulphide facies iron formation. These layers range in thickness from <1 to ~20 m (Dressler, 1979; Clark, 1980, 1988). They are only observed within the gabbroic terrain formed by the Gerido Intrusive Suite (Clark, 1988). Sulphide facies iron formation consists of dark grey to black, finely stratified (1-3 cm) and very fine-grained mudstone or siltstone. In places, the grain size may be coarser due to recrystallization. The rock is more or less magnetic and has a rusty alteration patina. It generally contains 20-40% (locally 90-100%) sulphides finely disseminated or as thin parallel laminae and massive beds >1 m thick. Sulphides consist of pyrrhotite, pyrite and locally chalcopyrite (Dressler, 1979). Sulphide facies rocks commonly contain thin, strongly boudinaged interstratifications of grey metachert (Clark, 1980, 1988).

Unit pPbb(m)4 has a very restricted distribution. It consists of oxide facies iron formation (Clark, 1978, 1988). The laminated rock is formed by alternating metachert and iron oxides (magnetite and hematite). The bed thickness generally varies from 1 to 30 cm. Metachert is grey or greenish grey in fresh surface and reddish brown or reddish orange in altered surface. Oxide-rich beds have a bluish black or bluish brown alteration patina. Some oolite and pellet jasper beds are observed locally (Clark, 1988).

Unit pPbb(m)5 comprises basalts and chloritic schists. These rocks are located SE of the confluence of the Koksoak and Mélèzes rivers, where they locally form interstratified layers in carbonate facies iron formations (pPbb(m)2) (Clark, 1978; Wares et al., 1988). In this area, basalt flows are highly deformed. They consist mainly of chloritic schist. However, flattened and folded pillows and lava tubes up to 2.5 m long can be recognized on outcrops. In places, chloritic schist contains up to 20% ferruginous carbonate (ankerite/siderite). Carbonate usually occurs filling amygdules or disseminated as brownish euhedral rhombohedrons 1 to 3 mm wide. In less schistose, non-carbonatized flows, basalt has an ophitic to subphitic texture. Flows also contain up to 3% euhedral pyrite. Thin beds (<1 m) of pyritic sericite schist are observed between flows.

In thin sections, basalt is composed of a chlorite-actinolite-albite-epidote-sphene assemblage with smaller amounts of magnetite and pyrite. Stilpnomelane is also present in carbonatized rocks. Secondary quartz is observed in cleavage planes (Wares et al., 1988).

Unit pPbb(m)7 consists of shale, dark grey to black slate commonly pyritic, siltstone and sandstone. In the area SW of Maizerets Lake, east of the Caniapiscau River (sheet 24F11), it is associated with iron-bearing rocks of unit pPbb(m)2 (Clark, 1978). In the northern part of the Labrador Trough, near the SE shore of Feuilles Lake (sheet 24K12), metamorphosed equivalents of unit pPbb(m)7 occur locally beneath an undivided iron formation unit. These rocks consist of micaceous schists and phyllites (Sauvé, 1959).

The Middle Baby member belongs mainly to the Gerido and Howse lithotectonic zones, as defined by Clark and Wares (2004). It extends >260 km from Feuilles Lake (sheet 24K13) to Dupoisson Lake (sheet 24C16). Its thickness generally ranges from 30 to 45 m north of latitude 58°N (Sauvé and Bergeron, 1965; Goulet, 1995). In the Hérodier Lake area, SW of Kuujjuaq, the Middle Baby member thickens from west to east and reaches at least 50 m in thickness (Clark, 1979, 1988; Wares et al., 1988). The true thickness of the unit is difficult to estimate due to the presence of thrust faults, folds and gabbro sills (Clark, 1988; Wares et al., 1988). Clark (1988) notes, however, that the thickness of the Middle Baby member is much less than that of the Sokoman Formation, which is estimated to be at least 113 m thick in this area.

The Middle Baby member is Paleoproterozoic in age. It belongs to the second cycle of Labrador Trough sedimentation dated 1.88 to 1.87 Ga (Clark and Wares, 2004). It correlates with the Sokoman Formation (Ferriman Group), dated ~1880 ±2 Ma (Chevé and Machado, 1988), and is therefore of the same age. In the northern Labrador Trough, this interpretation is based on the discovery of a regional thrust fault (Garigue Fault) below the sequence containing the Baby Formation (Clark, 1979). This correlation is also supported by the similarity between rare earth element profiles of iron-bearing rocks of the Sokoman Formation and the Middle Baby member (Clark, 1988). The Middle Baby member is also correlated with a small iron formation unit of the Thompson Lake Formation (Doublet Group) located at Irène Lake in the southern Labrador Trough (Clark and Wares, 2004).

The Middle Baby member overlies either the Lower Baby member or dolomite of the Denault Formation (Attikamagen Group) (Fahrig, 1965; Clark, 1988). It is conformably overlain by the Upper Baby member. This contact is not interstratified (Clark, 1988; Goulet, 1995).