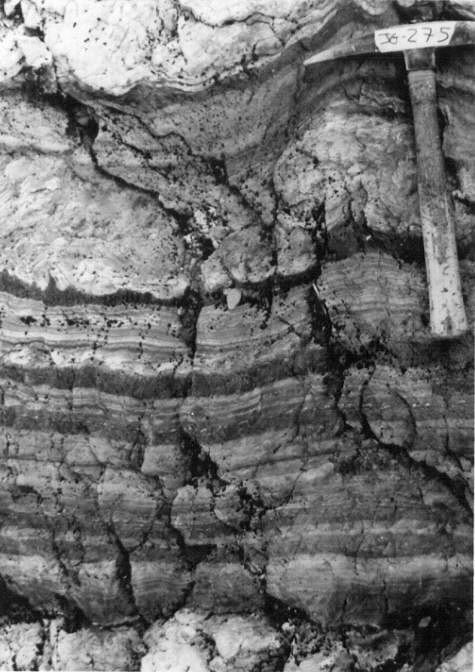 The Lower Baby Member is an allochthonous volcano-sedimentary unit forming the lower part of the Koksoak Group (Clark and Wares, 2004). It is represented by alternating mudstone, siltstone and sandstone displaying a rhythmic structure as well as quartzitic sandstone (turbidites). The Lower Baby member is generally identical to the Upper Baby member. It differs from the latter only in its stratigraphic position relative to dolomites of the Denault Formation (formerly Abner Formation) and iron-bearing rocks of the Middle Baby member (Sauvé and Bergeron, 1965; Wares and Goutier, 1990).

The rocks of the Lower Baby member are generally metamorphosed to the greenschist facies (Dimroth and Dressler, 1978; Fraser et al., 1978). These sedimentary rocks were deposited in a marine basin, located east of the Ferriman Group platform sequence, which was gradually deepening from west to east (Clark and Wares, 2004). In the northern part of the Labrador Trough, the presence of conglomerate and volcanic rocks near the base of the unit suggests that it was deposited while the basement was extending (Goulet, 1995). 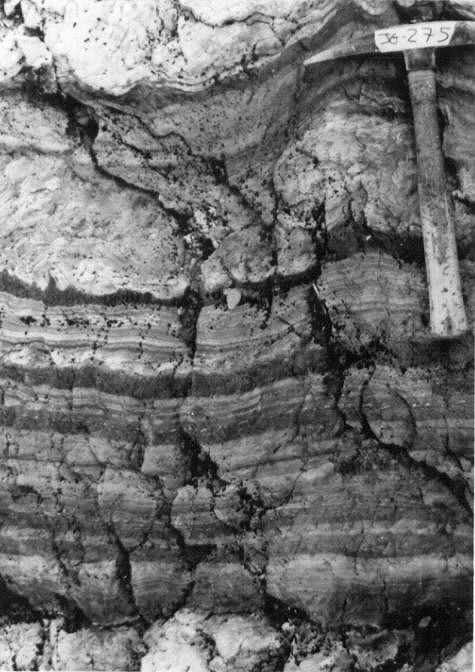 Unit pPbb(i)1 forms a sequence of mudstone, siltstone and lesser amounts of interbedded sandstone characterized by a rhythmic structure (rhythmites). These rocks are grey to dark greenish grey in fresh surface and slightly less dark in altered surface. They occur in millimetre to centimetre-thick (0.5-5 cm) finely laminated beds (Sauvé and Bergeron, 1965; Clark, 1977, 1978, 1979, 1980; Dressler, 1979). Sedimentary structures include sorting, parallel and cross bedding (Sauvé and Bergeron, 1965; Wares et al., 1988). Mudstone is fissile and locally graphitic. In places, it has a rusty alteration patina due to the presence of pyrite (Hashimoto, 1964; Clark, 1979; Dressler, 1979). The rock is locally schistose and occurs as phyllites and schists. Siltstone and sandstone are fine grained (Clark, 1977, 1979). Very thick (>4 m) sorted and channelized sandstone beds are present in places. Oblique stratification is also observed (Goulet, 1995). In the area NW of Gerido Lake, the upper part of unit pPbb(i)1 is locally thinly interbedded with quartzite (Sauvé, 1956; Sauvé and Bergeron, 1965). The rocks of this unit were referred to as the (now abandoned) Larch River Formation (Clark, 1978, 1979).

Unit pPbb(i)2 consists of grey, fine to medium-grained, bedded quartzitic sandstone. Sandstone beds are 1 to 3 m thick. They are interbedded with mudstone and, less frequently, dolomite (Clark, 1979). In the Feuilles Lake area (sheets 24K13 and 24N04), unit pPbb(i)2 consists of quartzitic sandstone and quartzite (Freedman and Philpotts, 1958; Sauvé, 1959; Bérard, 1965). The rock is white, grey or light yellow in fresh surface and white in altered patina. It is composed of quartz (75%), plagioclase (7%), muscovite (5%), biotite (3%), calcite (3%), dolomite (2%), chlorite (2%) and minor amounts of phlogopite and pyrite. Accessory minerals are apatite, stilpnomelane, tourmaline and zircon. In thin sections, quartz is granoblastic and has an undulatory extinction. It contains rare inclusions of chlorite, sericite, biotite, zircon and plagioclase. Plagioclase (albite) is granoblastic, twinned and locally pœikloblastic. Muscovite, biotite and chlorite are found between quartz grains (Bérard, 1965).

Unit pPbb(i)3 consists of basalt, tuff and breccia (Hashimoto, 1964; Clark, 1978; Bélanger, 1982; Goulet, 1995). These rocks are mainly basaltic in composition. They are grey to greenish grey or dark green to black, fine grained, and in places have a brownish altered patina. Basalt occurs as massive pillowed flows, locally interstratified with mafic tuff layers. In the Pyrite Falls area (sheet 24F06), basalt is locally vesicular (Clark, 1978). Further north, in the Faujas Lake area (sheet 24K05), pillow volcanic rocks contain highly deformed pillows, generally decimetric in size, whose polarity cannot be determined (Bélanger, 1982). SW of Raymond Lake (sheet 24K13), the flows are relatively thin (<10 m). They are massive at the base and pillowed with flow breccia at the top. Lavas are commonly porphyritic at the base of the unit and contain feldspar phenocrysts up to 2 cm in diameter. Each flow is typically overlain by mafic crystal tuff and laminated tuff (Goulet, 1995). Basalt is mainly composed of chlorite and albite with minor amounts of calcite. Near Jogues Lake, it locally contains 2-3% magnetite as well as epidote (Hashimoto, 1964).

Unit pPbb(i)5 consists mainly of graphitic black slate, locally pyritic, silty slate and grey, dark grey or greenish grey siltstone (Bérard, 1965; Sauvé and Bergeron, 1965; Clark, 1978, 1979, 1980, 1988). In places, these rocks have a rusty surface due to the presence of disseminated pyrite. Slate is commonly interbedded with millimetric beds of fissile siltstone, which may be locally pyritic. It also contains rusty quartz veinlets parallel to bedding (Clark, 1978, 1979). The rocks of this unit are highly deformed and affected by folding and thrust faults east of the Gourdon and Dusay lakes (Bérard, 1965). 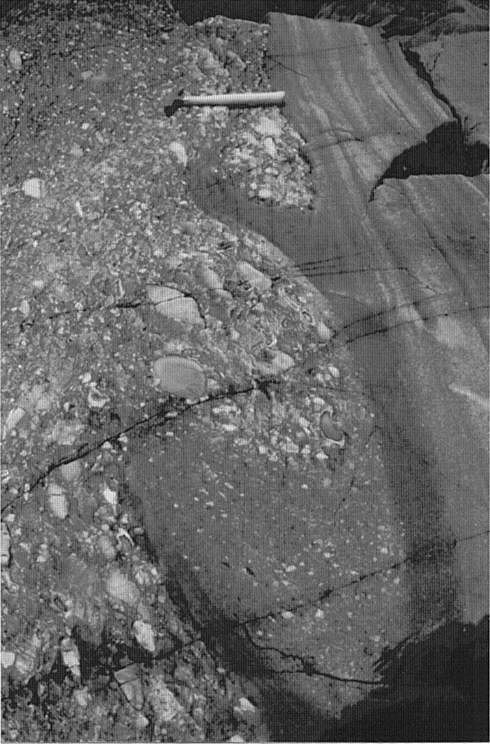 Unit pPbb(i)6 consists of micaceous schist and phyllite interbedded with quartzite and conglomerate (Bérard, 1959; Sauvé, 1959). Schist is composed of biotite, muscovite and chlorite (Sauvé, 1959). Variable amounts of garnet may be present locally (Clark, 1978). Quartzite occurs in metre-thick beds. It is generally quite pure, but may contain significant amounts of chlorite and muscovite. Conglomerate forms centimetre to metre-thick beds or lenses. It is composed of subrounded pebbles, 1 to 7 cm in diameter, sedimentary rocks (chert, quartzitic arenite, dolomite, sandstone, mudstone), volcanic rocks and plutonic rocks (Archean bedrock) in a sandstone matrix (Sauvé, 1959; Goulet, 1995). In the area north of Feuilles Lake, conglomerate is channelized (Goulet, 1995).

Unit pPbb(i)7 consists mainly of biotite micaceous schist, chlorite schist and biotite metapelite (Bérard, 1959, 1965; Sauvé, 1959; Clark, 1978). These rocks are green, grey or black, fine to medium grained, with well-developed schistosity. In places, a remnant of primary bedding is marked by the presence of thin sandstone beds. Schists contain numerous biotite and albite porphyroblasts that give the rock a spotted appearance (Bérard, 1959, 1965). The unit may include smaller amounts of marble, carbonate metapelite, quartzite or sandstone (Bérard, 1965; Sauvé, 1959; Clark, 1978).

In thin sections, rocks of this unit are mainly composed of quartz, biotite, chlorite, sericite and albite in variable amounts. Accessory minerals are apatite, microcline, epidote, stilpnomelane, tourmaline, cordierite, calcite, zircon, graphite, magnetite, pyrite and sphene. Quartz has a characteristic granoblastic texture. It occurs as grains 0.05 to 1.5 mm in diameter having an undulatory extinction. Biotite has a lepidoblastic or porphyroblastic texture. Porphyroblasts vary in diametre from 0.5 to 3 mm. Chlorite is generally lepidoblastic, rarely porphyroblastic. Albite has a granoblastic texture. It occurs as 0.3 to 1.5 mm crystals and forms porphyroblasts 1.5 to 2 mm in diameter. Muscovite is abundant in all rocks and is associated with biotite and chlorite. It exhibits a lepidoblastic texture resulting from sericite recrystallization (Bérard, 1965). The presence of garnet is also reported (Bérard, 1965; Clark, 1978).

The Lower Baby member belongs to the Gerido, Howse and Larch lithotectonic zones, as defined by Clark and Wares (2004). It extends ~250 km from Feuilles Lake (sheet 24K13) to Aulneau Lake (sheets 24C15 and 24F02). Sauvé and Bergeron (1965) estimate its thickness to be ≥600 m in the Gerido and Thévenet lakes area. However, with the exception of the Oatmeal and Baby lake margins, the member outcrops sparsely and is strongly folded in this area. In the Feuilles Lake area, near Algerine Pass (sheet 24K13), Goulet (1995) estimates a thickness of ~795 m. In the area SW of Hellancourt Lake (sheet 24K04), Goutier and Wares (1991) measured a minimum thickness of 300 m.

The Lower Baby member is Paleoproterozoic in age. It belongs to the second Labrador Trough sedimentation cycle dated 1.88 to 1.87 Ga (Clark and Wares, 2004). The Lower Baby member correlates with the Ruth Formation, which underlies the Sokoman Formation (1880 ±2 Ma; Chevé and Machado, 1988), and is therefore the same age as the Ruth Formation and slightly older than the Sokoman Formation.

In the northern Labrador Trough, the Lower Baby member is equivalent to the Wishart and Ruth formations (Ferriman Group) located further west (Goulet, 1995; Clark and Wares, 2004).