The term Ruth has been used in various ways by geologists in the central Labrador Trough. The name « Ruth Slate » was used by Labrador Mining and Exploration geologists in 1949 (see Frarey and Duffell, 1964). This unit comprised a package of iron-bearing slate, slate quarry iron formation, black and brown slate, carbonatized slate and argillaceous schist. Harrison (1952) introduced the name Ruth Formation in the southern part of the Trough after an eponymous lake in Labrador (sheet 23J15) to refer to a unit of black iron-bearing slate overlying quartzitic arenite of the Wishart Formation. Subsequent use of the name Ruth Formation has not been consistent everywhere because of the difficulty of distinguishing these rocks from those of the overlying Sokoman Formation. In general, rocks at the base of the sequence that are fissile, red or brown and partly terrigenous have been assigned to the Ruth Formation.

The Ruth Formation is a unit of autochthonous/parochthonous or allochthonous sedimentary rocks belonging to the lower part of the Ferriman Group platform sequence. It consists mainly of mudstone, siltstone and sandstone beds, all of which are iron-bearing, and chert (Clark and Wares, 2004). The Ruth Formation may contain sufficient iron to be an iron formation as defined by Gross (1959). According to Gross (1968), most layers in this formation contain >20% iron (see Gross, 1968, p. 20). The Ruth Formation differs from the overlying Sokoman Formation in part by the terrigenous nature of its constituents (Gross, 1968; Zajac, 1974). It should be noted that marked iron enrichment is noticeable in sedimentary rocks of the Ruth Formation (Gross, 1968; Clark and Wares, 2004). Other features that distinguish it from other formations include its fissility, iron-bearing nature and chert content (Baragar, 1967; Gross, 1968; Ciesielski, 1977; Dimroth, 1972, 1978; Dressler, 1979).

According to Dimroth et al. (1970), the source area of the detrital sedimentary rocks that make up the Ruth Formation is located west of the Labrador Trough. These rocks were deposited in calm, shallow water and mark a transition between the deposition of the detrital sediments of the Wishart Formation and the deposition of the chemically derived sediments of the Sokoman Formation (Gross, 1968; Dressler, 1979). In the Schefferville area, tuffaceous beds are evidence of contemporaneous volcanic activity east of the western margin of the Trough (Gross, 1968; Dimroth et al., 1970; Zajac, 1974). The high graphite and iron silicate content of the cherty and argillaceous rocks indicates that sedimentation took place in a strongly reducing environment rich in organic carbon (Gross, 1968).

The undivided unit includes all the rocks found in the Ruth Formation. It generally consists of iron-bearing mudstone, siltstone and sandstone, chert and micaceous schist. Interstratified jasper is observed locally (Ciesielski, 1977). Due to the map scale, the unit may also include minor amounts of iron formation or Wishart Formation rocks (Dimroth, 1972, 1978; Dressler, 1979).

West of Ungava Bay (sheets 24N05 and 24N12), the Ruth Formation consists of a pelitic and iron-bearing schist unit up to 30 m thick. The latter is composed of biotite, muscovite, sericite, chlorite and fine to medium quartz. Accessory minerals are garnet and tremolite. Schist contains bands very enriched in garnet, some porphyroblasts reaching >2 cm in diameter. Locally interbedded dark grey-brown hematite and Fe-carbonate are observed near the top of the unit (Gold, 1962).

South of latitude 55°N, the Ruth Formation consists of iron-bearing mudstone, siltstone and sandstone, chert, micaceous schist and minor amounts of dolomite. The unit may include some iron formation or Wishart Formation rocks (Harrison et al., 1972; Dimroth, 1972, 1978). Mudstone is black and laminated. According to Zajac (1974), it is composed of chlorite, quartz, orthoclase and, locally, graphite and pyrite. Interstratified graphitic chert and silicate-carbonate facies iron formation are common. Grey tuff beds, 10 cm to 1 m thick, are observed east and west of Schefferville and near Attikamagen Lake (Gross, 1968; Dimroth, 1972, 1978; Zajac, 1974). Tuff is composed of K-feldspar porphyritic trachybasalt fragments, chlorite and opaque minerals in a matrix of chlorite, pyrite and K-feldspar. The fragments’ diameter varies from 1 to 20 mm. Some tuff beds are sorted (Zajac, 1974).

Unit pPru1 forms the base or lies above the base of the Ruth Formation. It consists of layers of black, grey, brown or red chert varying in thickness from 0.30 to 3 m, more rarely reaching 5 and 10 m (Dressler, 1973, 1975a, 1979). Chert is massive, homogeneous, intraclastic, oolitic and, in places, bedded or brecciated (Dimroth, 1972, 1978; Ciesielski, 1977; Dressler, 1979; Clark, 1979). Black chert beds are slightly wavy (Dimroth, 1972, 1978). In thin sections, the rock is composed of quartz intraclasts 0.5 to 0.7 mm in diameter and coarser quartz grains cemented by microcrystalline quartz, quartz or chalcedony. Intraclasts are subangular to rounded, strongly compacted and made up of very fine (<0.02 mm) quartz. Locally, black chert changes to finely bedded and oolitic red chert. The chert’s red colour results from a fine hematite dust, whereas the black colour is due to finely disseminated graphite (Dimroth, 1972, 1978; Dressler, 1979).

Unit pPru2 consists mainly of iron-bearing mudstone and siltstone. Mudstone, which forms the lower part of the unit, is dark grey, brownish or greenish, and generally laminated. It consists of ~5 mm-thick argillaceous laminae, which alternate with 2-3 mm thick silty laminae. Mudstone exhibits characteristic fissility parallel to bedding (Dimroth, 1969, 1972, 1978; Dressler, 1979). Silty beds commonly display constriction, bulging and incipient boudinage structures (Dimroth, 1972, 1978). In the Goethite Lake (sheet 24C07) and Roussenet Lake (sheet 24C02) areas (Dimroth, 1969, 1972, 1978), mudstone is in gradual contact upwards with dark grey to greenish grey siltstone having a brown alteration patina. Siltstone is massive or forms 5 mm laminae. The rock is hard, conchoidal in fracture, and has no cleavage parallel to bedding. Cross bedding is commonly observed (Dimroth, 1969, 1972, 1978). In the Hématite Lake area (Dimroth, 1972, 1978; Dressler, 1979), mudstone is overlain by a package of iron-bearing siltstone and mudstone accompanied by mottled and banded chert. This package varies in thickness from a few millimetres to 6 m (Dressler, 1979). It occurs alternating red, green, brown or grey laminae having an average thickness of 5 mm (1-10 mm).

In thin sections, mudstone is composed of 25-30% angular quartz grains (<0.002 mm) in a matrix of chlorite, mica and iron oxides (lepidocrocite and goethite). Graphite, sericite and stilpnomelane are also observed (Dimroth, 1972, 1978; Dressler, 1979). Silty laminae contain 75-80% recrystallized quartz grains in a chlorite matrix (Dimroth, 1978; Dressler, 1979). Muscovite, biotite and graphite were also observed by Dimroth (1972, 1978). Siltstone is composed of ≥50% angular quartz fragments (maximum diameter of 0.05 mm) in a dark green matrix of clay minerals, mica and chlorite. Most quartz occurs as grains (~0.02 mm in diameter) that are difficult to distinguish from the matrix. Small chlorite eyes (0.05 mm) and minor amounts of muscovite, biotite (0.1 mm) and graphite (0.1 mm) are also observed (Dimroth, 1972, 1978). 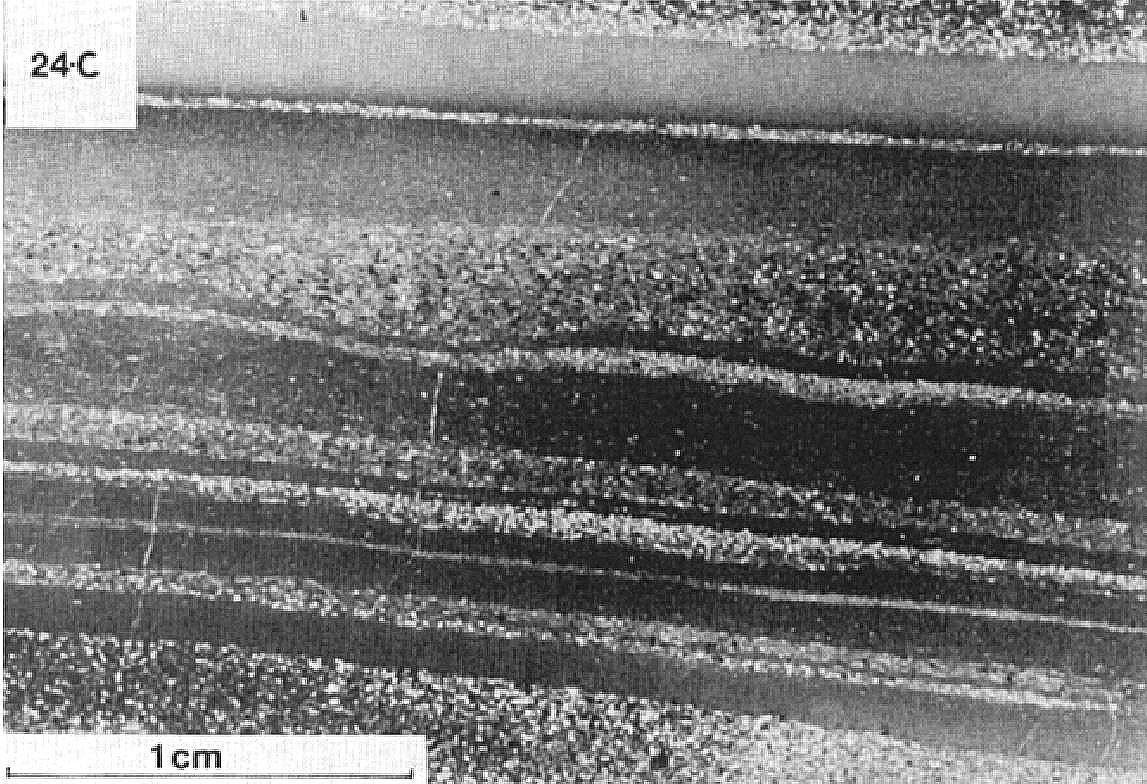 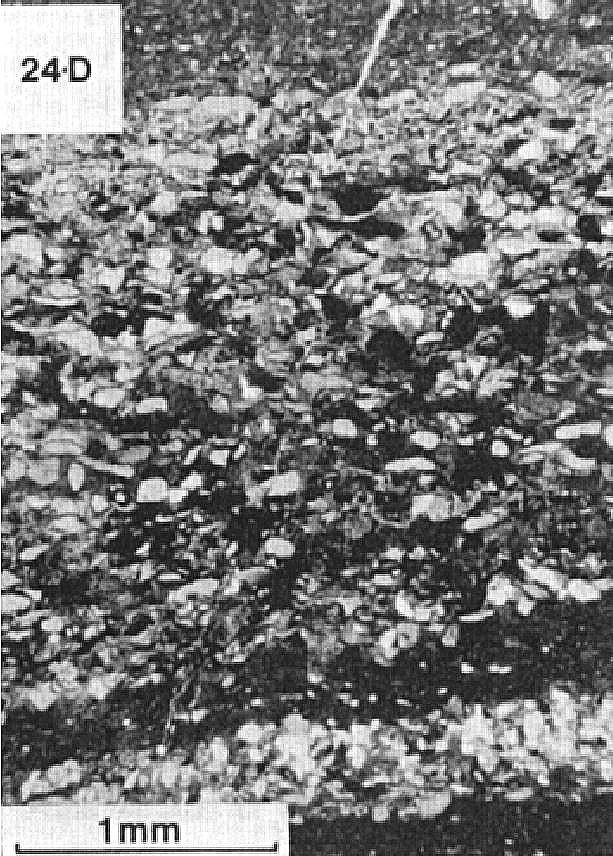 Unit pPru3 was mapped by Dimroth (1969, 1978) south of latitude 55° 30′ N and in the Luché and Giraffe lakes area (sheet 24C07). In the latter area, it is overlying unit pPru4. It consists of dark grey to greenish grey iron-bearing siltstone having a brown alteration patina. The rock is finely laminated (5 mm) or massive. It is hard, with a conchoidal fracture, and displays no cleavage parallel to bedding. Cross bedding is commonly observed and identify the tops of the beds. The rock is highly fractured and fracture planes are stained brown or black by manganese deposits. Iron-bearing siltstone has a similar mineralogical composition to unit pPru2 iron-bearing siltstone. According to Dimroth (1969, 1972, 1978), it is distinguished from the latter by a higher iron content.

Unit pPru4 is located in the Luché and Giraffe lakes area (Dimroth, 1969, 1978), where it is overlain by unit pPru3. It consists mainly of dark grey iron-bearing mudstone having a brown alteration patina. The rock is well laminated and occurs in ~5 mm-thick beds, which alternate with lighter grey silty beds 2-3 mm thick. The mudstone shows a characteristic fissility that is parallel to bedding; it breaks up into irregular fragments 5 cm in diameter and 5 mm thick. Dimroth (1972, 1978) points out that silty beds commonly display constriction, bulging and incipient boudinage structures. Iron-bearing mudstone has a similar mineralogical composition to unit pPru2 iron-bearing mudstone. According to Dimroth (1969, 1972, 1978), it is distinguished from the latter by a higher iron content.

Unit pPru6 outcrops sparsely in the Forbes Lake area (sheet 24F05). It is in conformable contact with the oxide facies (pPso1) and carbonate facies (pPso3) iron formations of the overlying Sokoman Formation, and may be absent in places. Its total thickness is not known, but a thickness of up to 12 m was measured by Clark (1977). The unit consists of interstratified red iron-bearing sandstone, greenish sandstone and dark grey or greenish grey siltstone. The bed thickness varies from 0.01 to 1 m. In places, the unit includes subordinate layers of mudstone and jasper locally containing numerous quartz veins. Red iron-bearing sandstone is generally close to the contact with the Sokoman Formation, while sandstone and siltstone occur lower in the sequence. Jasper beds are located near or at the base of the unit (Clark, 1977).

Unit pPru7 consists mainly of a 15 to 35 m-thick sequence of dark grey to black, locally pyritic or graphitic slate, silty slate and siltstone (Clark, 1979). Near the north shore of the Mélèzes River, east of the Aigneau River, and east of Kanipitasachitich Lake, the base of the unit is in conformable contact with a 1.5 to 14 m-thick, finely bedded, dark grey to black chert unit assigned to unit pPru1 (Clark, 1979). The Wishart Formation appears to be absent from these areas.

The Ruth Formation belongs to the Bérard, Cambrien, Mélèzes, Payne, Schefferville and Tamarack lithotectonic zones, as defined by Clark and Wares (2004). It is located near the western margin of the Labrador Trough, where it is closely associated with the Sokoman Formation (Baragar, 1967). The Ruth Formation is recognized from the Ungava Bay area (sheet 24N12) to the southern Schefferville area of Quebec and continues into Labrador. According to Bérard (1965) and Harrison et al. (1972), the Ruth Formation has a high degree of lateral continuity.

In the Hématite Lake area, a lamprophyre dyke associated with carbonatites of the Castignon Volcanic Complex and intrusive in the Ruth Formation has given a K-Ar age of 1873 ±53 Ma (Dressler, 1975b, 1979; Chevé, 1993). This age is consistent with the estimated Rb-Sr age of 1870 ±50 Ma (Fryer, 1972) for the overlying Sokoman Formation. Chevé and Machado (1988) obtained a concordant U-Pb age of 1880 ±2 Ma for a zircon megacrystal from a fluorite carbonatite feeder dyke. They interpreted this result as the age of crystallization of the dyke, which would be contemporaneous with the Sokoman Formation. Findlay et al. (1995) obtained a U-Pb age of 1878 ±1 Ma from a syenite pebble in a conglomerate interstratified in alkaline subaerial volcanics of the Nimish Volcanic Complex (Dimroth, 1970; Dimroth et al., 1970; Zajac, 1974; Evans, 1978; Wardle and Bailey, 1981) near Schefferville. The Nimish volcanics are contemporaneous with the Sokoman Formation, so the Ruth Formation is somewhat older.

The Ruth Formation is partly correlated with the Lower Baby member in the eastern part of the Trough (Clark, 1988).

WARDLE, R.J. 1979a. Geology of the eastern margin of the Labrador Trough. Department of Mines and Energy, Government of Newfoundland and Labrador; Report 78-9, 22 pages. http://gis.geosurv.gov.nl.ca/geofilePDFS/WBox040/LAB_0415.pdf

WARDLE, R.J. 1979b. The western Margin of the Labrador Trough. Department of Mines and Energy, Government of Newfoundland and Labrador; Report 79-1, 7 pages. http://www.nr.gov.nl.ca/nr/mines/geoscience/publications/reportactivities/1979/Wardle2_ROA1979.pdf