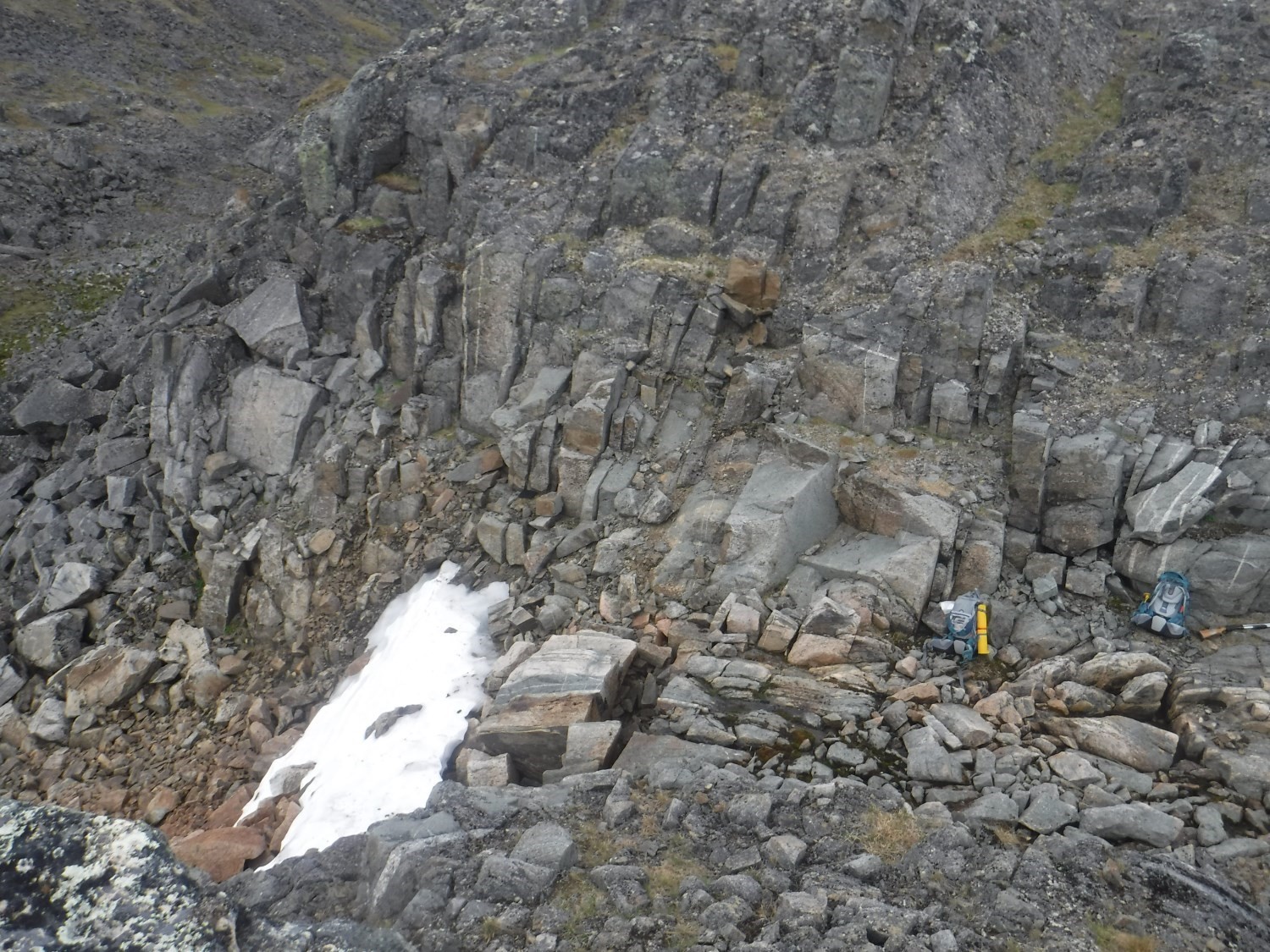 This record is based on the interpretation of geophysical imaging and information collected from geological survey carried out in the summer of 2019 in the Sirmiq Lake area (Vanier and Lafrance, 2020).

The Crevasse Shear Zone (ZCcre), located in the SW corner of sheet 33K02, is contained within the Sources Structural Domain (DSsou). It corresponds to a more deformed zone surrounding a block that has undergone dextral overthrusting towards the SE. Thus, its northern part presents sinistral kinematics contrasting with the Sources Structural Domain. Based on aeromagnetic maps, it is assumed that the Crevasse Shear Zone continues ~15 km westward.

Certain stratigraphic units of the Narsajuaq Lithotectonic Domain, namely the Estre Complex (ApPete2) and Frichet Suite (pPfri), are affected by the shear zone. The northern part of the ZCcre is also strongly focused in a granitoid about 12 metres thick which may be related to the Sanningajualuk Suite (pPsnn).

The attitude and characteristics of structural fabrics vary between the southern and northern segments of the shear zone. In the southern part, the main fabric is a tectometamorphic foliation marked by the alignment of ferromagnesian minerals and, locally, by slight mineral segregation. Mylonitic fabrics are sparse and expressed by the presence of quartz bands and feldspar porphyroclasts. The foliation’s average orientation is WSW and the dip is moderate. Mineral or stretch lineations are approximately in the foliation’s slope line, i.e. oriented 306°/33°. Linear fabrics are expressed by quartz and, more locally, feldspar lenses, or by the positioning of ferromagnesian minerals in elongated clusters.

The northern segment of the shear zone is characterized by more intense deformation and the presence of mylonites. The orientation of the planar fabric is E-W and the dip is subvertical. The linear fabric is particularly intense and generally defined by quartz rods. It has a dip of 20° westward. 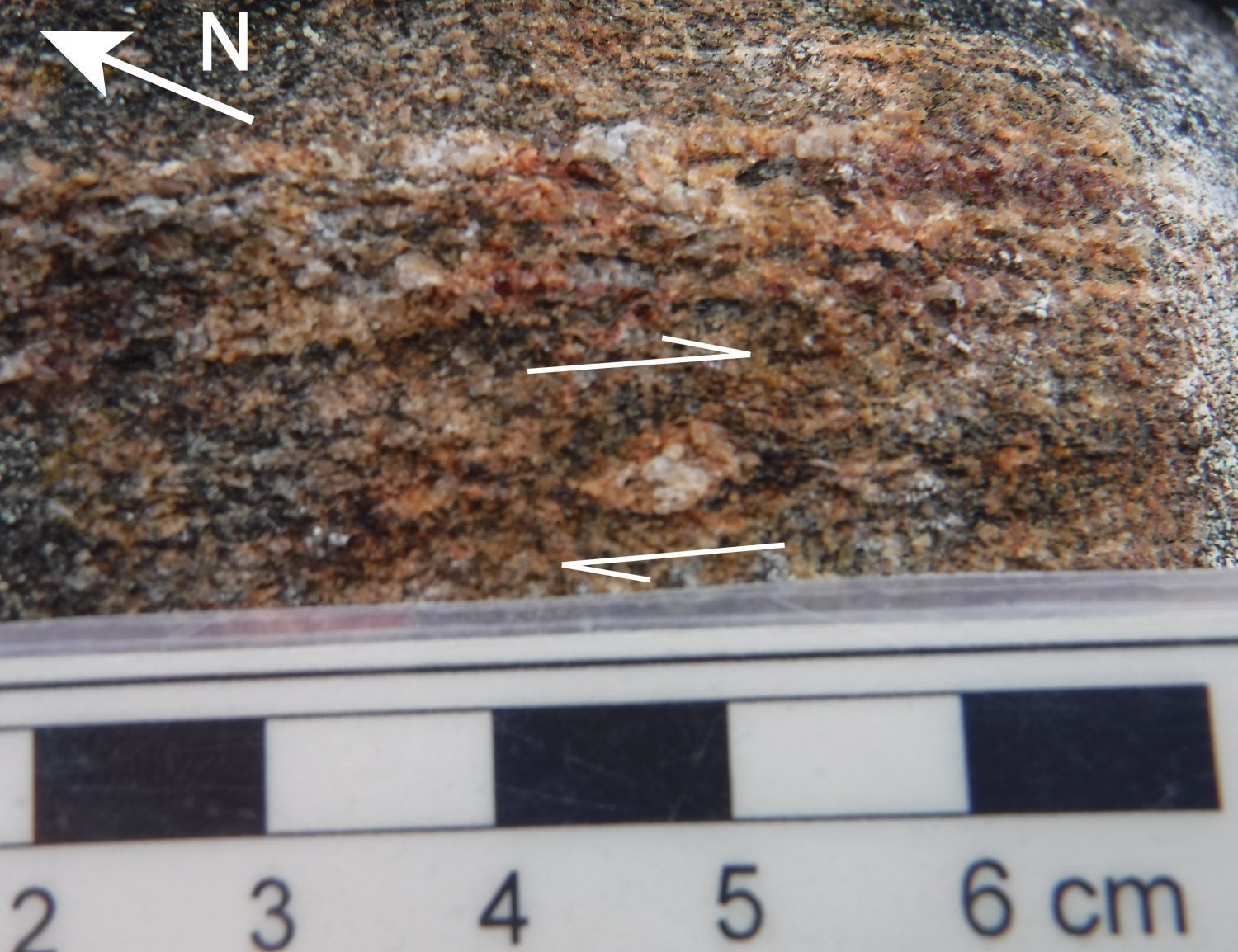 Like the main fabric, kinematics of the Crevase Shear Zone varies between the northern and southern segments. So that in the south, kinematics are reverse on a WSW-oriented and moderately inclined plane, whereas in the north, sinistral kinematics occur on a subvertical E-W surface.

The Crevasse Shear Zone is a structure delimiting a block which is overthrusted towards the SE. This displacement is accommodated by conjugate kinematics, i.e. reverse to the south and sinistral to the north. The shear zone to the north is significantly narrower and is concentrated in a granite intrusion at the contact between the Frichet Suite and Estre Complex. Deformation is more intense than in the south and is expressed by the formation of quartz rods and feldspar porphyroclasts. Due to the movement towards the SE, a transtensional deformation regime is deduced in the northern segment of the shear zone. The presence of L>S tectonites supports this hypothesis, since these commonly develop in transtension zones (Fossen and Cavalcante, 2017 and references cited).

The southern segment of the shear zone has diffuse boundaries, where the intensity of deformation gradually decreases towards the Sources Structural Domain, which has similar structural characteristics. Sparse quartz bands and feldspar porphyroclasts are visible in the most deformed locations, although no mylonite is present. Deformation is homogeneously and diffusely distributed.

Quartz and metamorphic mineral textures indicate granulite facies thermal conditions during deformation. Quartz occurs in bands of coarse amoeboid and elongated grains (up to ~1 mm long). These quartz textures are typical of dynamic recrystallization by grain edge migration and involve deformation temperatures >500 °C (Stipp et al., 2002). Metamorphic minerals present in the Crevasse Shear Zone are garnet, orthopyroxene, biotite and, locally, hornblende. Garnet is anhedral to subhedral and generally rich in quartz and plagioclase inclusions. Quartz bands are bent close to garnet, indicating pre-kinematic to syn-kinematic formation. Orthopyroxene forms isolated subhedral grains or clusters elongated in foliation. The latter is syn-kinematic. The majority of biotite flakes are aligned and subhedral to euhedral, giving a lepidoblastic texture to the rock.

On the map of the residual magnetic field, the Crevasse Shear Zone marks a narrow transition between two anomalies, one positive and one negative. The positive anomaly is associated with the Pingasualuit Complex and Frichet Suite, whereas the negative anomaly corresponds to the Estre Complex. This strong contrast indicates a sharp contact between these stratigraphic units along the ZCcre.

No lithology has been observed crosscutting the ZCcre. However, an estimate of the deformation’s maximum age can be deduced since it affects the Frichet Suite, which is probably Paleoproterozoic in age.