Goutier et al. (2002) later described this sequence in more detail, dividing it into five different units and giving it the name Guyer Group. The majority of the work has focused on improving the definition of the group, including U-Pb isotope datations, and identifying new occurrences of Guyer Group units (Goutier et al., 2001, 2002; Bandyayera et al., 2011, 2013; Hammouche et al., 2015; Gigon and Goutier 2017; Goutier et al., in preparation). 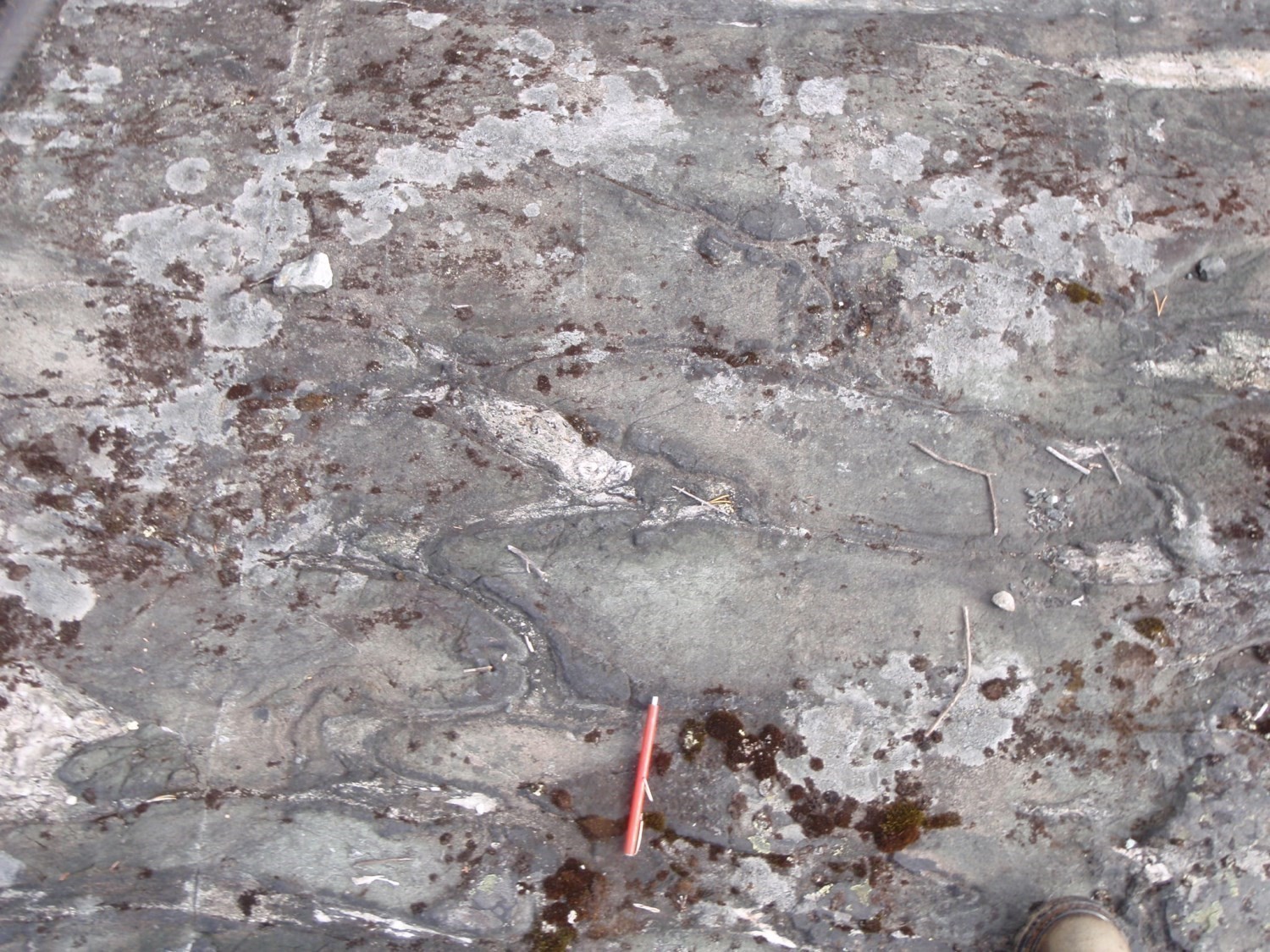 This is the dominant unit of the Guyer Group. It consists of amphibolite derived from basalt, previously defined as “Breton and Guyer Metabasalt” by St. Seymour and Francis (1988). Pillowed, massive or brecciated lava facies are well preserved, despite the phases of deformation and metamorphism that affected these rocks. Locally, they alternate on metric thicknesses. The pillows are usually elongated and flattened with preserved hyaloclastic borders. The rock is dark green or black with a brownish patina. Grain size varies from fine to medium with minerals such as hornblende, actinolite and plagioclase. Grain size increases with deformation and metamorphic recrystallization. The minerals present are biotite, garnet, magnetite, epidote, carbonate and quartz (Goutier et al., 2002). Hammouche et al. (2015) observed this amphibolite unit in sheet 33H11. The rock varies from very fine to fine-grained and from nematoblastic to porphyroblastic (hornblende). Pyrite, pyrrhotite and arsenopyrite were also observed in amphibolite.

Several facies variations are visible on a local scale. Some areas form narrower and more deformed bands. In this case, basalt is completely metamorphosed into amphibolite. The structure is banded, alternating between black to dark green bands (1 to 40 cm) composed mainly of hornblende and plagioclase, grey bands (1 to 5 cm) richer in plagioclase and millimetric white quartzofeldspathic bands. Within these three types of bands, centimetric lenses and a few millimetric bands of apple-green epidote and diopside are visible (Goutier et al., 2002).

Another facies variation is observed in levels of glomeropphyric basalt with plagioclase (Stamatelopoulou-Seymour, 1982). Plagioclase phenocrystals (1 to 35%) are yellow white, rounded and measure from 0.2 to 4 cm. The dark green matrix is very fine-grained. Phenocrystals can be either weakly deformed or strongly stretched in foliation (Goutier et al., 2002; Bandyayera et al, 2011).

Hammouche et al. (2015, 2017) added paragneiss derived from wacke horizons to unit mAgy1. These horizons are present in the most easterly band of the unit in sheets 33H10 and 33H11. They vary in thickness from one decimetre to a few metres. Paragneiss is usually rusty light brown or dark grey in altered patina and light grey to brown grey in fresh exposure. It is composed of fine grains of feldspar, quartz and green biotite. It also contains minor amounts of hornblende, garnet, carbonates, magnetite and locally pyrite. 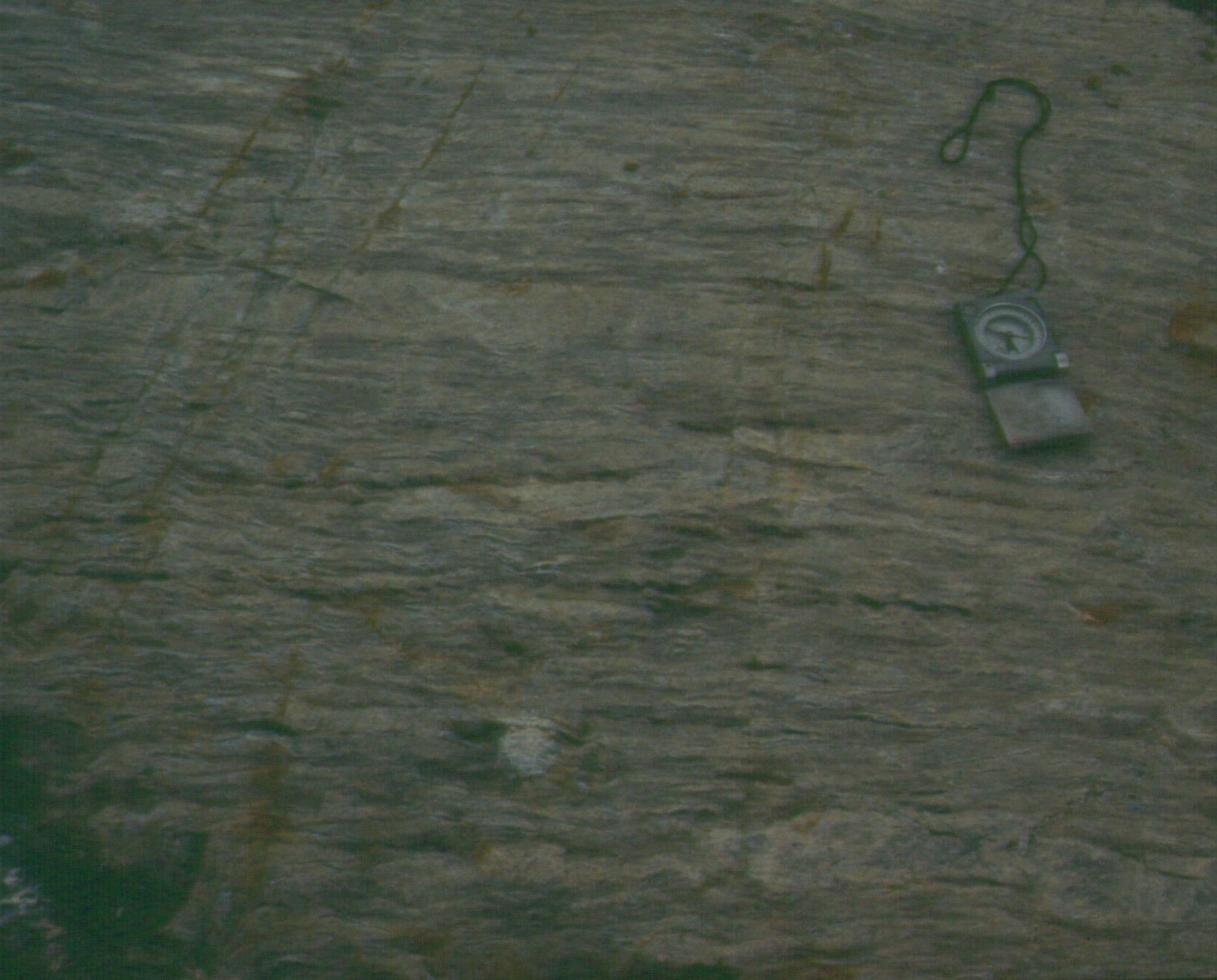 This volcanic unit is 0.3 to 1 km wide by 6.5 km long. It is a lapilli and block tuff with a white, beige and in places yellow patina and a grey fresh surface. Fine beige and greenish lamines are visible, linked to mylonitic schistosity or foliation. In several cases, tuff becomes sericite schist. Foliation, as well as strong sericite alteration, make it difficult to observe primary volcanic structures such as the presence of fragments. Quartz porphyritic dykes cut this unit (Goutier et al., 2002).

This felsic tuff is composed of quartz, plagioclase, sericite-muscovite, biotite and chlorite. It is also possible to find sulphides (pyrite, pyrrhotite, arsenpyrite, spalerite and chalcopyrite; e.g. showings Arséno and TR-PL3-10-018), actinolite, epidote, tourmaline, cordierite, staurotide, sillimanite, carbonates and titanite. Some of these minerals are derived from metamorphism associated with synvolcanic hydrothermal alteration (Goutier et al., 2002). Clasts are mafic (negative relief) to felsic (positive relief) and make up 60% of the rock. These fragments are aligned with foliation and usually stretched. Locally, white centimetric leucocratic bands with plagioclase alternate with dark bands rich in mafic lapillis; the latter contain 1-3% garnet and 10-20% biotite and hornblende (Bandyayera et al., 2011).

During work in the Casterne Lake area, the arenite and graphitic schist horizon in trenches TR-PL3-10-017 and TR-PL3-10-018 (Cayer, 2011) were interpreted as felsic volcaniclastics, sorted and overlain by a graphitic mudstone horizon. This horizon is at the top (north side) of unit mAgy2 unit (sheets 33G06 and 33G11). It is usually in normal contact with unit mAgy1 amphibolite. Locally, this contact is masked by the presence of a pyroxenite sill (outcrop 2018-MP-7305). This graphitic mudstone horizon is enriched with sulphides (pyrite, chalcopyrite and sphalerite) and is a metallotect for volcanogenic massive sulphides exploration. This subunit was defined during the summer 2011 work in the SW portion of sheet 33H12. It is associated with two metasomatic zones of felsic volcanics. Garnet is very abundant (up to 22%) and has a diameter of up to 6 cm. Disseminated sulphides are also present in smaller amount. Locally, it is possible to observe staurotide and sillimanite (Goutier et al., in preparation). 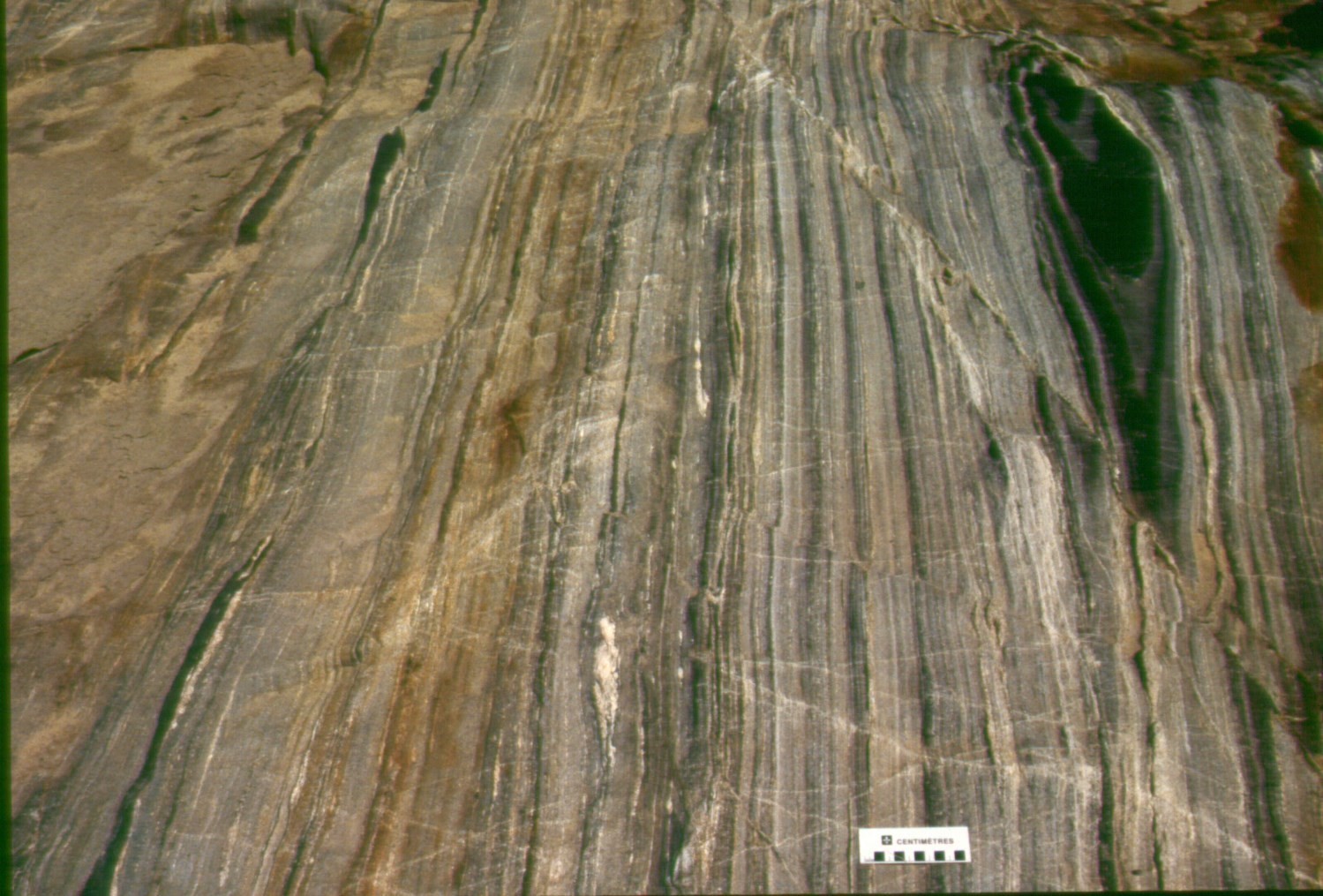 This unit was introduced in 2018 to define a highly deformed Guyer Group metavolcanic band. It occurs in sheets 33G05 and 33G11 as a 12 km long and ≤800 m thick arched band. Outcrops are well exposed on the shores of the islands of the La Grande 3 Reservoir. The unit consists of a complex assemblage of gneiss whose protolith is interpreted as derived from intermediate, felsic and, to a lesser extent, mafic volcanics. The rock has a zebra structure, with centimetric horizons that are either beige with more biotite-rich lamines or black or dark grey with hornblende, or even pale grey and whitish. These horizons alternate with metric horizons consisting of either dark green banded amphibolite, diopside and epidote, or white centimetric fragments (possibly lapillis). These rocks are also cut by many tonalite, hornblendite and granite dykes of centimetric to metric thickness. 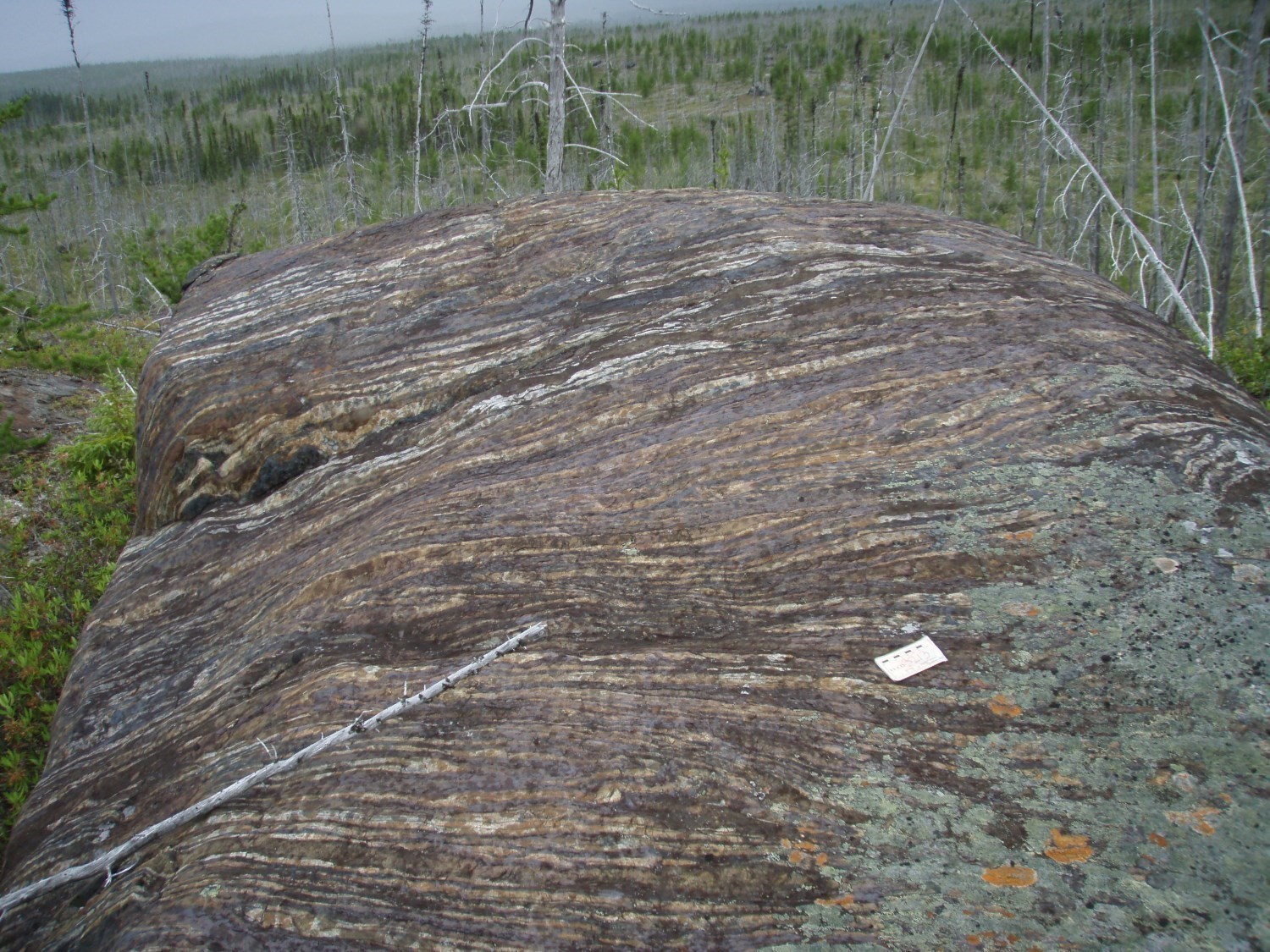 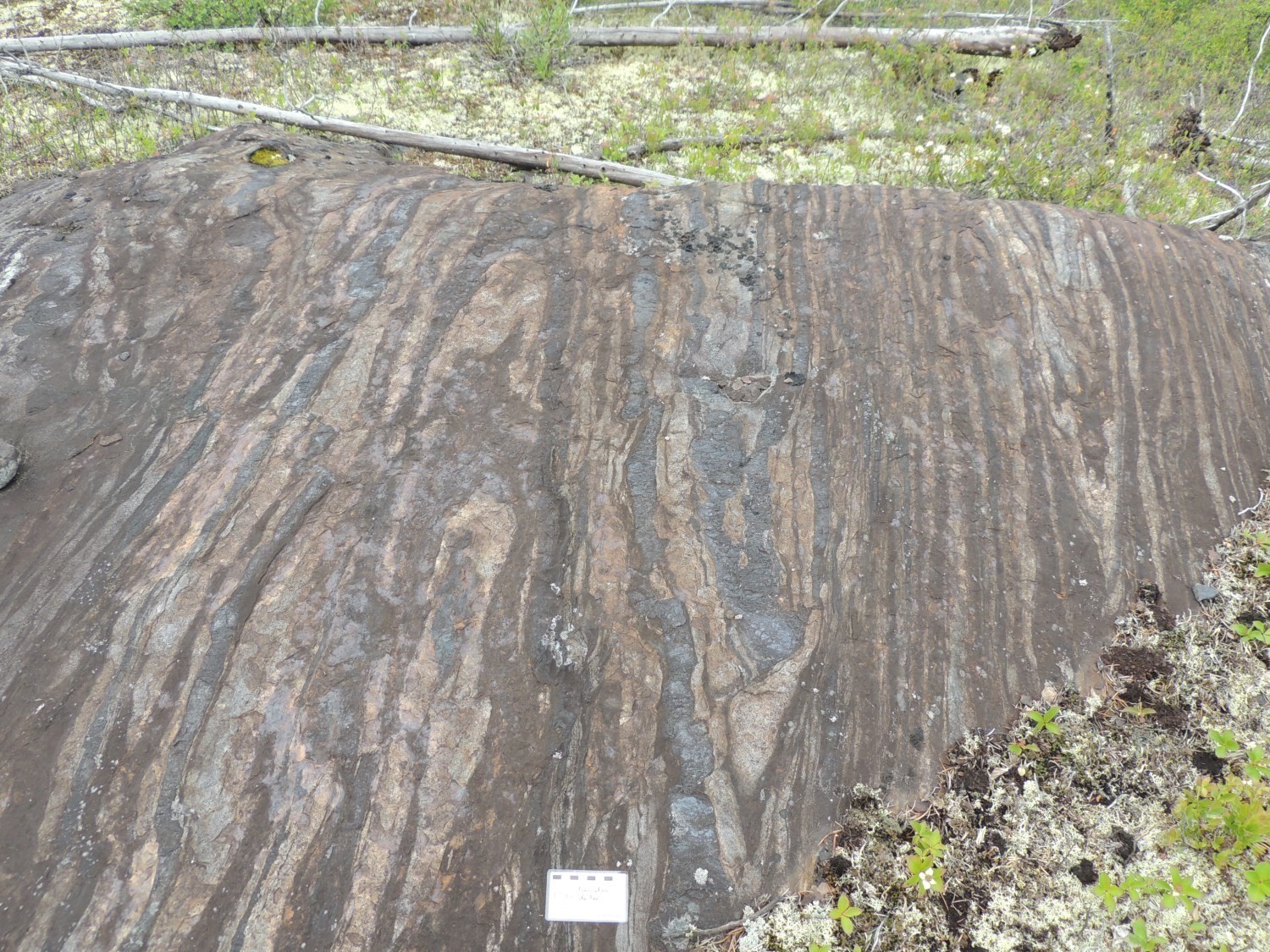 Iron formation forms several horizons in the Guyer Group. These horizons are present throughout the sequence and have a strong magnetic signature (Goldak Airborne Surveys, 2008). They vary in thickness from one metre to several decimetres. Facies are usually interstratified with the surrounding lithologies, either amphibolite, tuff or wacke (Bandyayera et al., 2011). The dominant facies of iron formation is the oxide facies. It outcrops as magnetite-rich millimetric to centimetric beds. These beds alternate with granoblastic chert beds. In general, magnetite is fine-grained and has been recrystallized by metamorphism. The rock patina is oxidized due to the presence of a small amount of sulphide. The silicate-oxide facies is recognizable by the presence of coarse amphibole and garnet. Silicate horizons are composed of grunerite, hornblende, cummingtonite, biotite, garnet, hedenbergite and chlorite. Disseminated magnetite and sulphide grains are visible in silicate laminae. Millimetric to centimetric intervals of disseminated to massive magnetite are also present (Goutier et al., 2002).

Massive sulphide lenses (pyrrhotite-pyrite ± chalcopyrite ± arsenopyrite) are associated with the minor sulphide facies iron formation. These lenses are metric and are located at the interface between felsic tuff and amphibolite, or along a gold-bearing horizon in sheet 33G06 (Goutier et al., 2002).

Unit mAgy3 also includes centimetre to metre-thick horizons of wacke and tuff interstratified with iron formation. This unit has a variable colour ranging from green to pink and, in places, brown and beige. Wackes are usually dark grey to green in fresh exposure. Foliation dominates over bedding locally. The wacke is composed up of quartz, feldspar, hornblende and biotite with spots of epidote and garnet (up to 20%). The latter differs from the nearby Ekomiak Formation wacke, since it is finer grained and disseminated magnetite can be found within wackes only associated with conglomerates.

Graphitic mudrock is primarily found in the iron formation encountered on trench TR-01-01, while on the TR-01-02 trench in the Orfé gold mineralized zone (sheet 33G06), it lies between wackes and basaltic amphibolites (Bogatu and Huot, 2016). It is very fine grained, which makes mineralogical distinction difficult in the field. Its mineralogical assemblage consists of quartz, feldspar, graphite and disseminated to massive sulphides. Euhedral arsenopyrite crystals were observed on trench TR-01-02. the rock is dark grey in fresh exposure, while it is rusty brown in altered surface, indicating large sulphide content. Preferential sulphide alteration gives this unit a vesicular appearance. At the interface between iron formation and basaltic amphibolite, this unit is flattened and deformed in a WNW-ESE oriented gold-rich shear corridor. Graphitic mudrock can have high gold contents (≤54.6 g/t; Orfé mineralized zone). 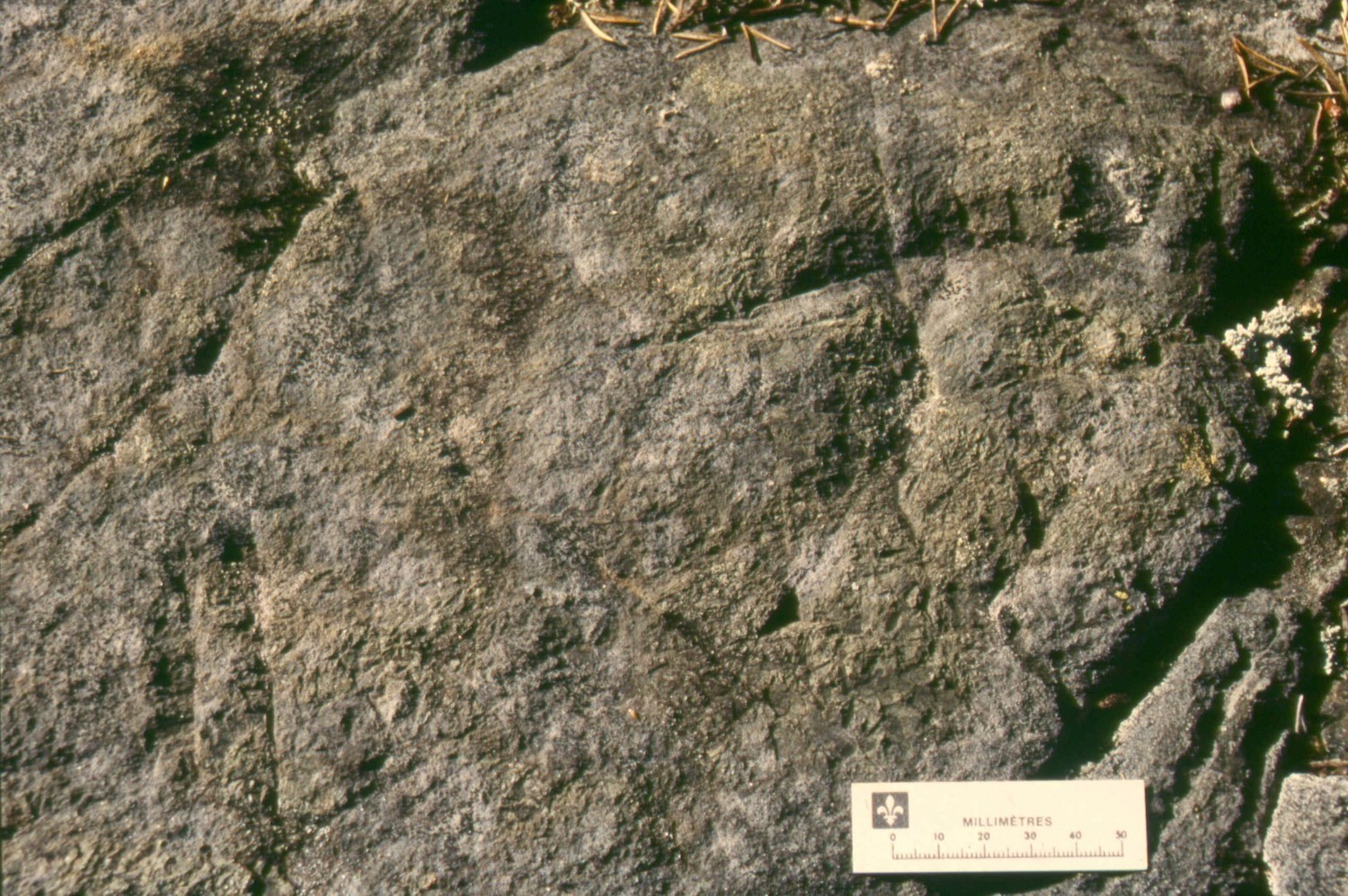 Unit mAgy4 is composed of magnesium basalt and komatiite distributed according to several distinct bands. St. Seymour (1975b) and Stamatelopoulou-Seymour (1982) defined a band north of the Transtaïga Highway in sheet 33G06, while St. Seymour and Francis (1988) listed a second band south of the Transtaïga Highway in the same sheet. Goutier et al. (2002) defined a third band in sheet 33G11, while Bandyayera et al. (2011) identified two other bands west and northeast of the De Pontois River in sheets 33G10 and 33G07.

The patina varies from brownish grey (peridotite facies) to shiny bottle-green (pyroxenite facies); the rock is easy to scratch. Pillow flows and massive flows are the most prevalent in the region and spinifex and polygonal joints are visible in places. The typical arrangement of komatiite flows, Pyke Hill type (Pyke et al., 1973), does not apply. Fine-grained rock consists mostly of tremolite, serpentine, chlorite and talc. It is not an amphibolite, as there are no black fine needles of amphibole present. Magnetite is common in the peridotite facies and rare in the pyroxenite facies. Millimetric porphyroblasts of brown olivine developed in several places in the rock (Stamatelopoulou-Seymour and Francis, 1980b; Goutier et al., 2002). Orthopyroxene porphyroblasts have also been identified (Bandyayera et al., 2011) and may account for 5-15% of the rock. Felsic intrusions are observed locally in this unit.

The lateral extension of this unit ranges from 1 to 6.5 km by 100 to 600 m wide. Unit mAgy4 is usually associated with iron formations. In contact areas, komatiite is heavily deformed and locally schistose. 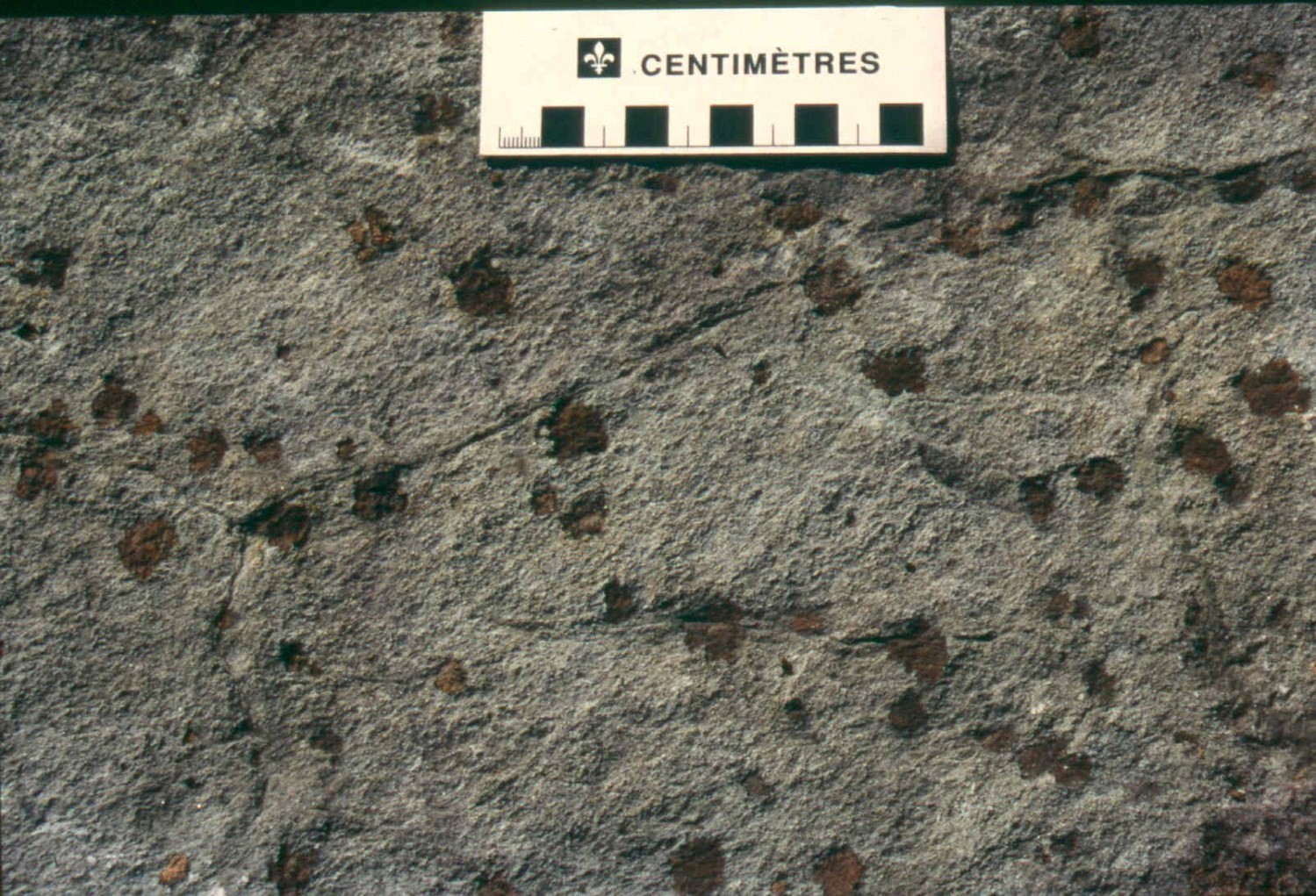 The ultramafic wacke unit was identified in sheet 33G06 by Stamatelopoulou-Seymour and Francis (1980) and was exposed for 1.5 km in the northern portion of the sheet. These are very well-preserved ultramafic turbidites. They conformably lie on komatiites and are covered by pillow basalts and pyroxenite. The rock is pale brown and consists of cyclic layers of thin to medium beds with grading structures and parallel and oblique laminations. The mineralogical assemblage consists of fine grains of tremolite, chlorite, talc, serpentine, carbonates, magnetite and chromite. The spotted appearance of the rock comes from olivine porphyroblasts, which are metamorphic in origin (Goutier et al., 2002).

Three U-Pb isotope datings of felsic volcanics (unit mAgy2a) of the Guyer Group indicate that this unit is Mesoarchean, with an age of 2820 Ma to 2806 Ma). 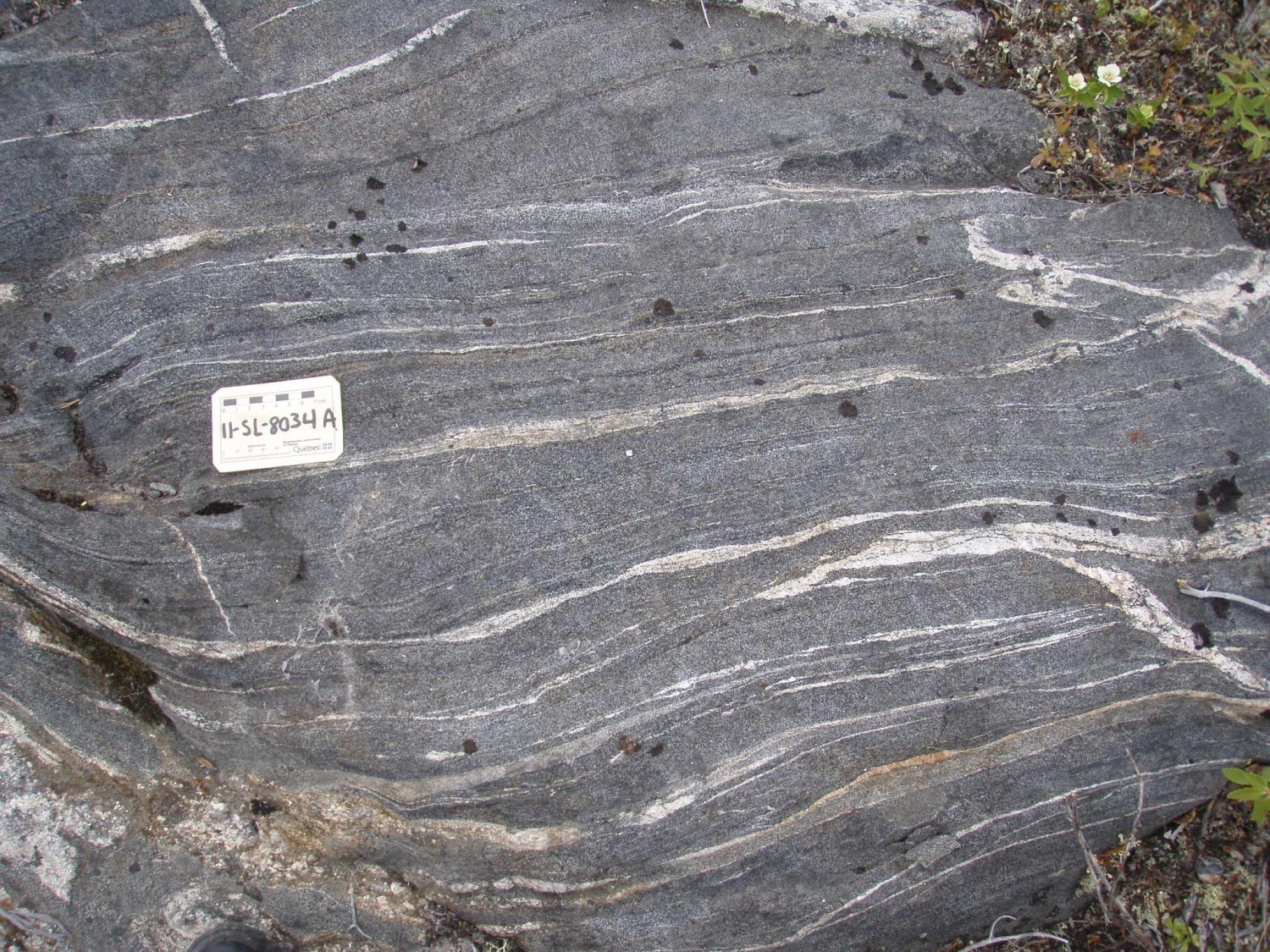 Amphibolite derived from basalt (mAgy1) and gneiss derived from intermediate and felsic volcanics (mAgy2b) of the Guyer Group are heavily deformed in areas of contact with other units such as the Langelier Complex, the Poste Le Moyne Pluton and the Bezier Suite. These rocks are folded, sheared and mylonitized.