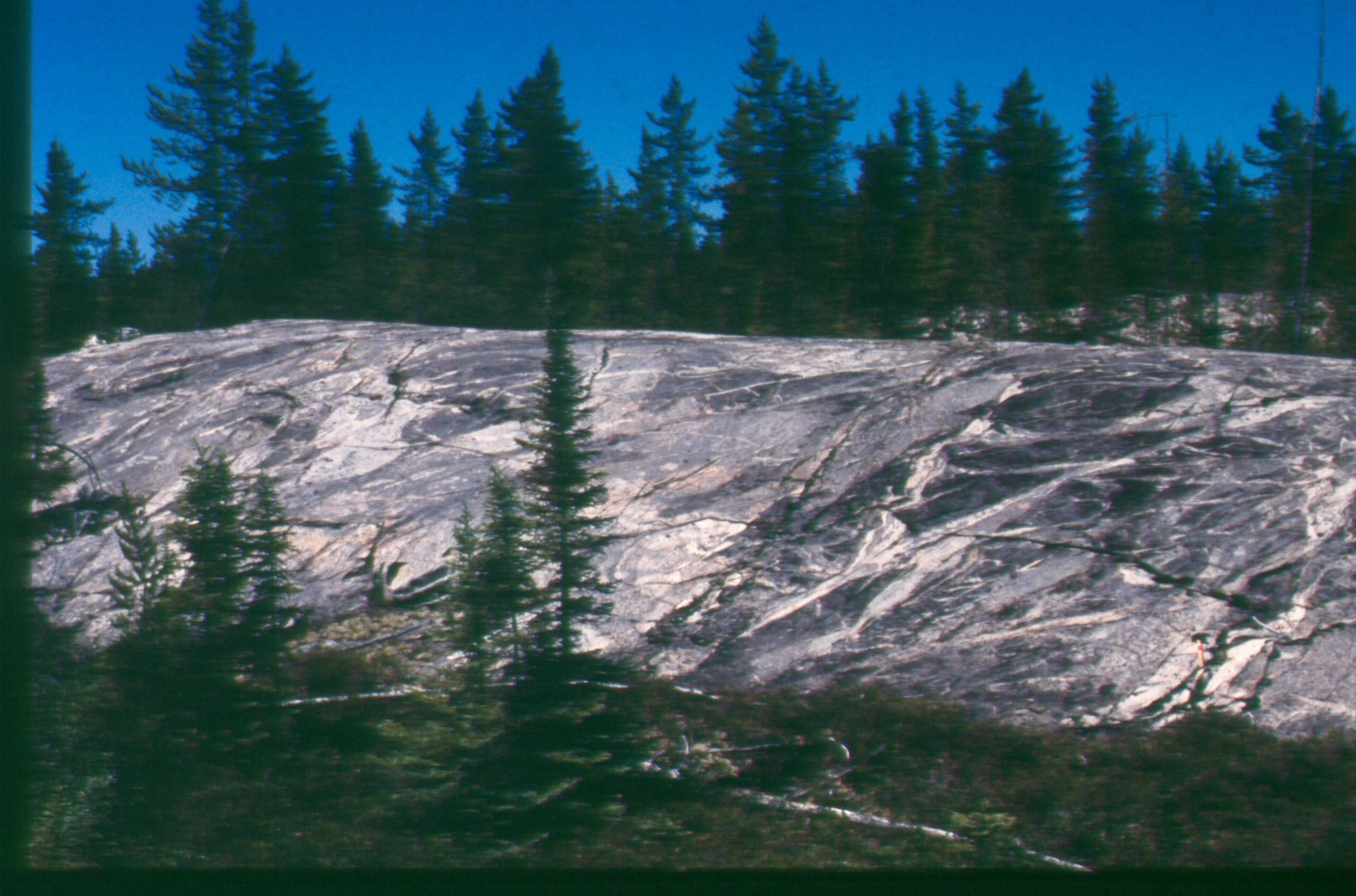 Gneiss, migmatite, diorite and deformed tonalite were grouped into a new complex called the Langelier Complex due to the abundance of these rocks in NTS sheet 33F03 of the lake of the same name. This complex was defined following geological mapping in sheet 33F (Goutier et al., 1998a, 1998b, 1999a and 1999b) and particularly in sheet 33F03 (Goutier et al., 1999b). In sheet 33F03, subunits Algl1, Algl2 and Algl3 are present and the stratigraphic relationship between granitic gneiss and the Apple Formation is observed (Davis et al., 2015). Subsequently, the work of Goutier et al. (2000, 2001 and 2002) led to the extension of this unit to the east.

The reference section of the Langellier Complex proposed by Goutier et al. (1999b) follows the James Bay road in sheet 33F03. At two locations, tonalite was sampled for U-Pb isotopic dating. Another important section is located in the Shpogan Lake area (33F03). One can observe the relationship with the oldest granitic gneiss of the La Grande Subprovince (3452 ±16 Ma; Davis et al., 2015) and the discordant stratigraphic relationship with the Neoarchean Apple Formation (Davis et al., 2015).

The Langelier Complex represents all the oldest rocks in the La Grande Subprovince, which are divided into five units. The first subdivision (Algl) contains tonalite and tonalitic to dioritic gneiss. The second (Algl1) consists of a tonalitic gneiss and a granitic gneiss (2811 ±2 Ma, 3452 ±16 Ma). The third unit (Algl2) is minor and consists of granoblastic diorite that forms discontinuous bands. The fourth unit, designated Algl3, is the dominant unit and consists of hornblende and biotite tonalite (2796.5-2788 Ma) foliated to gneissic. The last and fifth unit, restricted to sheet 33G10, is a magmatic breccia.

The first unit corresponds to lithological variations ranging from foliated biotite tonalite to biotite and hornblende tonalitic gneiss. These variations are too narrow to be mapped (Goutier et al., 2001a). Bandyayera et al. (2011) also noted breccia in this unit. 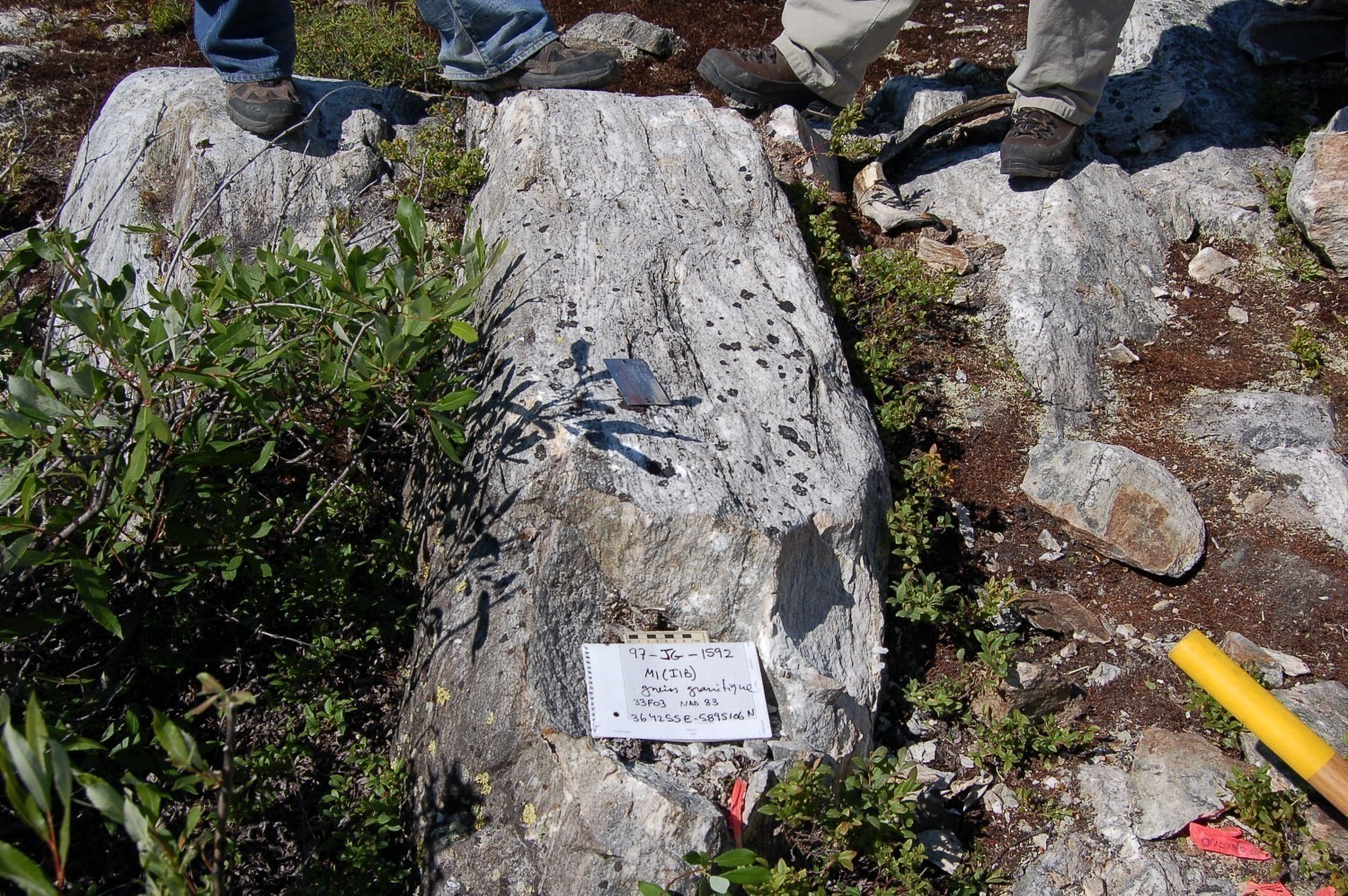 In sheets 33F15 and 33F16, a hornblende dioritic gneiss has been defined as belonging to unit Algl1. This dioritic gneiss is interbedded in the tonalitic gneiss. A variation is visible according to the mineralogical composition of the diorite which is poor in quartz and potassium feldspar. The dioritic gneiss is of darker grey to greenish, with medium-grained plagioclase, hornblende, biotite, magnetite and epidote. Its banded structure is pronounced and the mafic bands can be composed of up to 50% hornblende (Goutier et al., 2001a). These bands are generally millimetric to centimetric and alternate with pale grey and whitish bands rich in plagioclase. Gneiss is migmatized (Goutier et al., 2001b).

The gneissic tonalite is present in the northeast quarter of sheet 33G. It consists of alternating millimetric to centimetric bands rich in biotite and hornblende (<15%) with whitish bands richer in plagioclase (<50%). This gneissic tonalite is intruded into an older banded tonalite (Bandyayera et al., 2011). The banded tonalite is composed of mostly tonalitic, but locally granodioritic grey-white centimetric bands alternating with bands of more mafic composition. These bands can be up to 40 m thick. This banding is underlined by late intrusions of tonalite, granodiorite, diorite and aplite along gneissosity planes. This rock was not migmatized as there was no evidence of partial melting (Bandyayera et al., 2011).

Locally, unit Algl1 can hold about 5% metric highly deformed locally banded amphibolite enclaves, with amphibole crystals and plagioclase parallel to foliation. The proportion of enclaves increases to as much as 20% near the breccia unit Algl4. 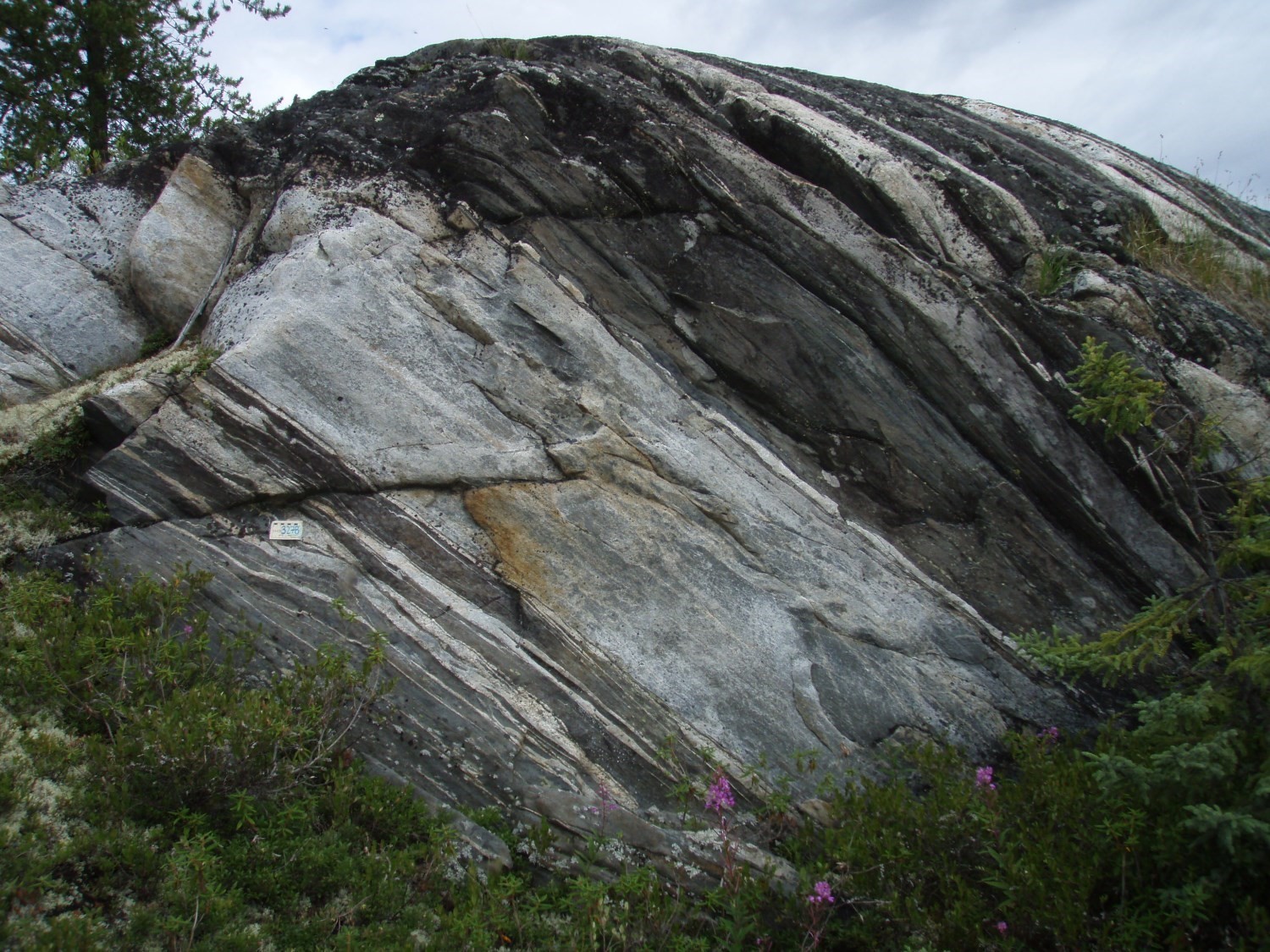 The hornblende quartz diorite defined by Goutier et al. (1999b) is medium grained and dark grey. It is locally porphyritic with plagioclase phenocrystals. It is rich in coarse amphibolite enclaves with a shiny green tint. This band is, in some places, closely linked to the surrounding gneiss making it difficult to separate them (Goutier et al., 1998a). It is generally found in metric bands within other units. 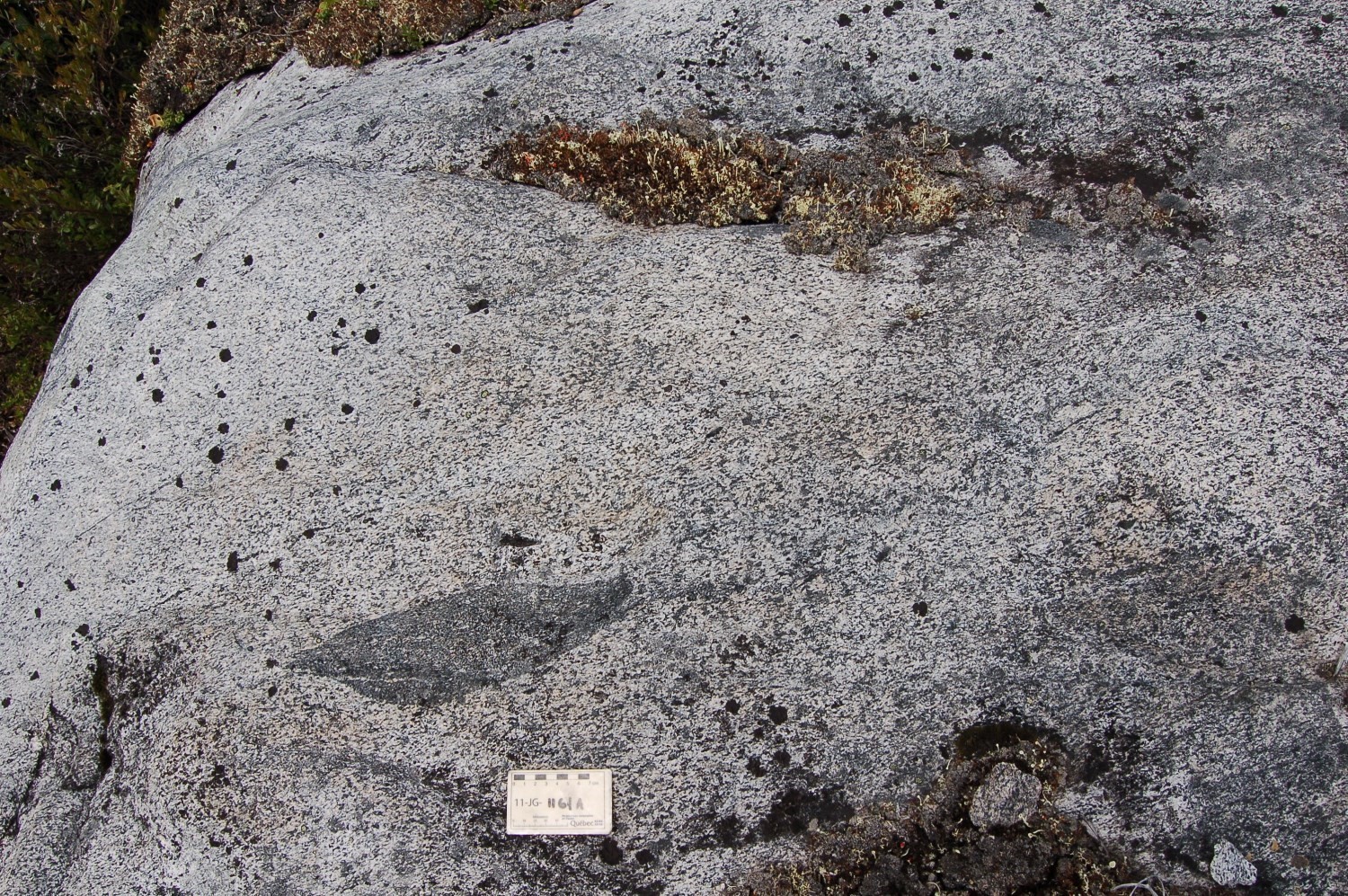 Hornblende and biotite tonalite has foliation that can show a gneissic structure (Goutier et al., 2001a). It is fine to medium grained and granoblastic. The rock is greyish to pinkish white. It is low in K-feldspar (<10%) while hornblende, biotite and epidote make up 30% of the rock. However, in some places, tonalite is less rich in ferromagnesian minerals (33F03 and 33F06; Goutier et al., 1998a). Chlorite, sphene and magnetite can be observed. Different variations of unit Algl3 are identified based on the abundance of hornblende and biotite in the rock.

In the SW area of the La Grande 3 reservoir (sheets 33F08, 33F09, 33G05 and 33G12), this unit is composed of a tonalitic to granodioritic foliated intrusion with biotite ± hornblende. This intrusion has a gray to whitish patina and fresh break. The grain size varies from fine to medium. The rock contains 1 to 10% biotite, with or without hornblende. Magnetite, epidote, muscovite and garnet constitute accessory phases. At the contact with the Laguiche Complex, the rock presents a mylonitic foliation and a strong mineral lineation. This intrusion has been dated to 2796.5 ±5.3 Ma (outcrop 2015-MC-1185, David, 2018).

The foliated tonalite (Algl3) contains metric to decametric biotite tonalitic gneiss (Algl1) enclaves indicating a younger age for unit Algl3. Amphibolite enclaves are also present. These could have a lateral extension of 100 m to 1 km per 100 m to 500 m wide. The enclaves are few in the unit, but are strongly foliated that is to say banded and epidotised. Due to their size and composition, they were attached to the Guyer Group amphibolite unit mAgy1 (Bandyayera et al., 2011).

This unit is located on the edge of contact with the Guyer Group and the tonalite is then banded, mylonitic or even gneissic. This implies an area of deformation between the two units (Goutier et al., 2001b). Quartz is then banded and plagioclase is porphyroclastic. The latter is present in small amounts (<7%), as is the case for biotite (2-10%) that appears on the surface as aggregate lenses in negative relief.

This unit is defined by Bandyayera et al. (2011). It is an intrusive breccia with fragments of tonalite, diorite and ultramafic to mafic rocks. This unit is heterogeneous with fragmented material representing 30 to 90% of the rock. Multiple intrusions of diorite and tonalite also define this unit. The composition of the fragments varies greatly. The majority of fragments are 1 to 40 cm wide and 5 to 80 cm long, but can be angular to rounded without particular orientation. The mafic and ultramafic fragments have metasomatic aureoles locally. The composition of the matrix varies from tonalitic to dioritic and undergoes polyphase brecciation marked by several magmatic intrusions of dioritic or tonalitic nature. Finally, in deformation zones, the fragments are stretched, flattened and realigned according to the surrounding host rock fabric. Some of the fragments are foliated indicating an early deformation phase in the brecciation phase.

The ages shown in the table below are based on U-Pb dating carried out mostly on tonalite or tonalitic gneiss samples. The Langelier Complex is dated 3452 to 2788 Ma (Davis et al., 2014). The most recent age of 2760 Ma is interpreted as an episode of metamorphism that affected the bedrock lithologies prior to the emplacement of volcano-sedimentary sequences (Goutier et al., 1999b).

The Langelier Complex is interpreted as the bedrock and corresponds to a very ancient event. As a result, other formations are generally intrusive into the complex or are delimited by shears. The Apple Formation lies conformably on rocks of the Langelier Complex (Goutier et al., 1999b). At the edge of contact with the Guyer Group amphibolites (mAgy1) in sheets 33G05 and 33G11 (Goutier et al., 2002) and 33G07 and 33G10 (Bandyayera et al., 2011), the foliated tonalite (Algl3) shows a banded, mylonitic or even gneissic structure indicating an area of major deformation or shear between the two units. Quartz is then in the form of ribbons and plagioclase is porphyroclastic. The contact area also contains several mafic and felsic dykes that are either boudinaged or transposed following banding. The unit Algl3 tonalite located just south of the Griault Belt contains volcano-sedimentary rock enclaves belonging to this belt; this indicates that the tonalite is younger (Simard and Lafrance, 2011). If rocks of the Griault Belt are coeval to the Yasinski Group, which conformably lie on the Apple Formation, unit Algl3 tonalite would be related to a much younger tonalitic magmatic event than that of the Langelier Complex.

Finally, many decimetric to metric dykes cut rocks of the Langelier Complex. The most common are granodiorites, pegmatic granites and lamprophyres.