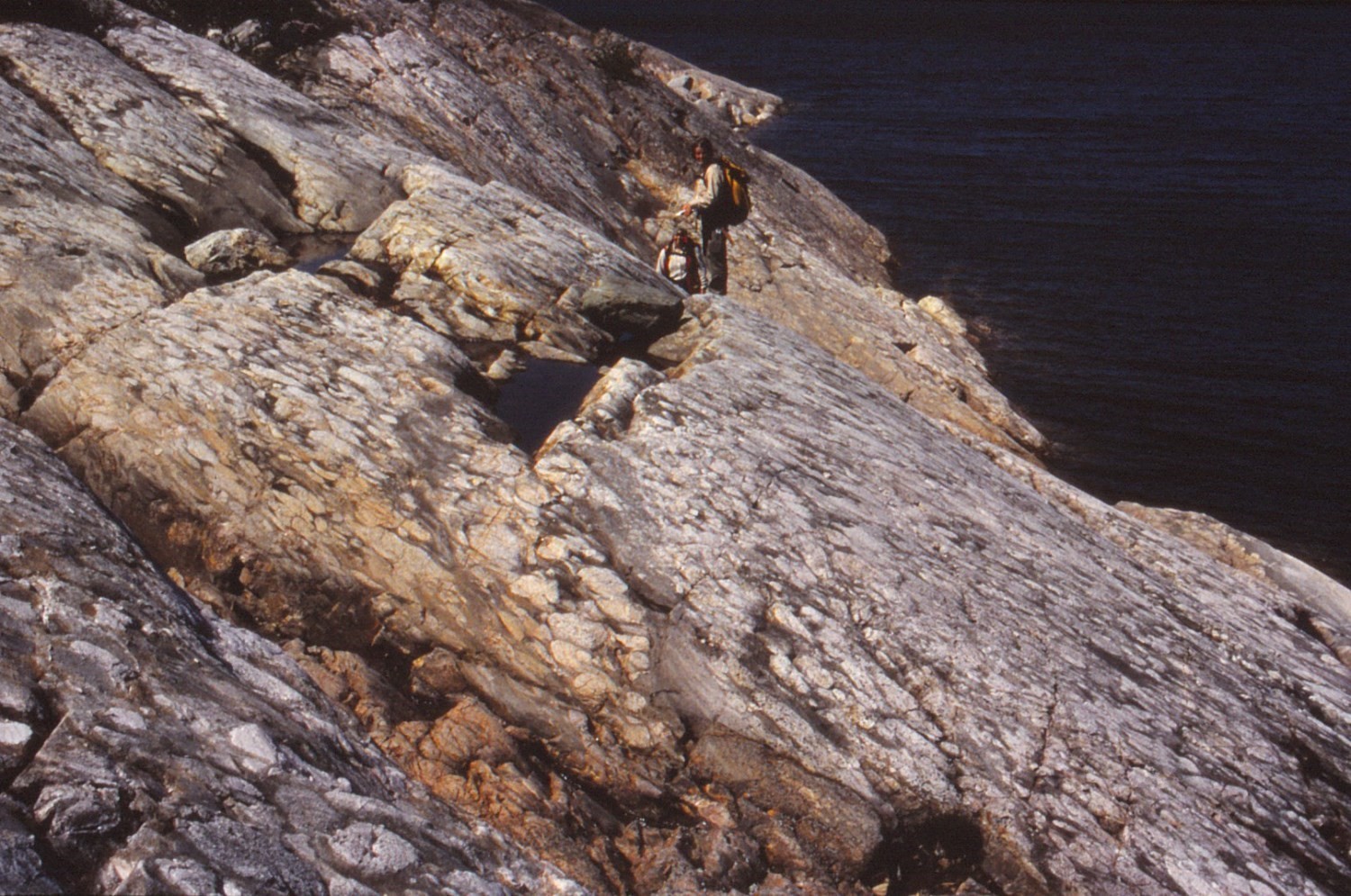 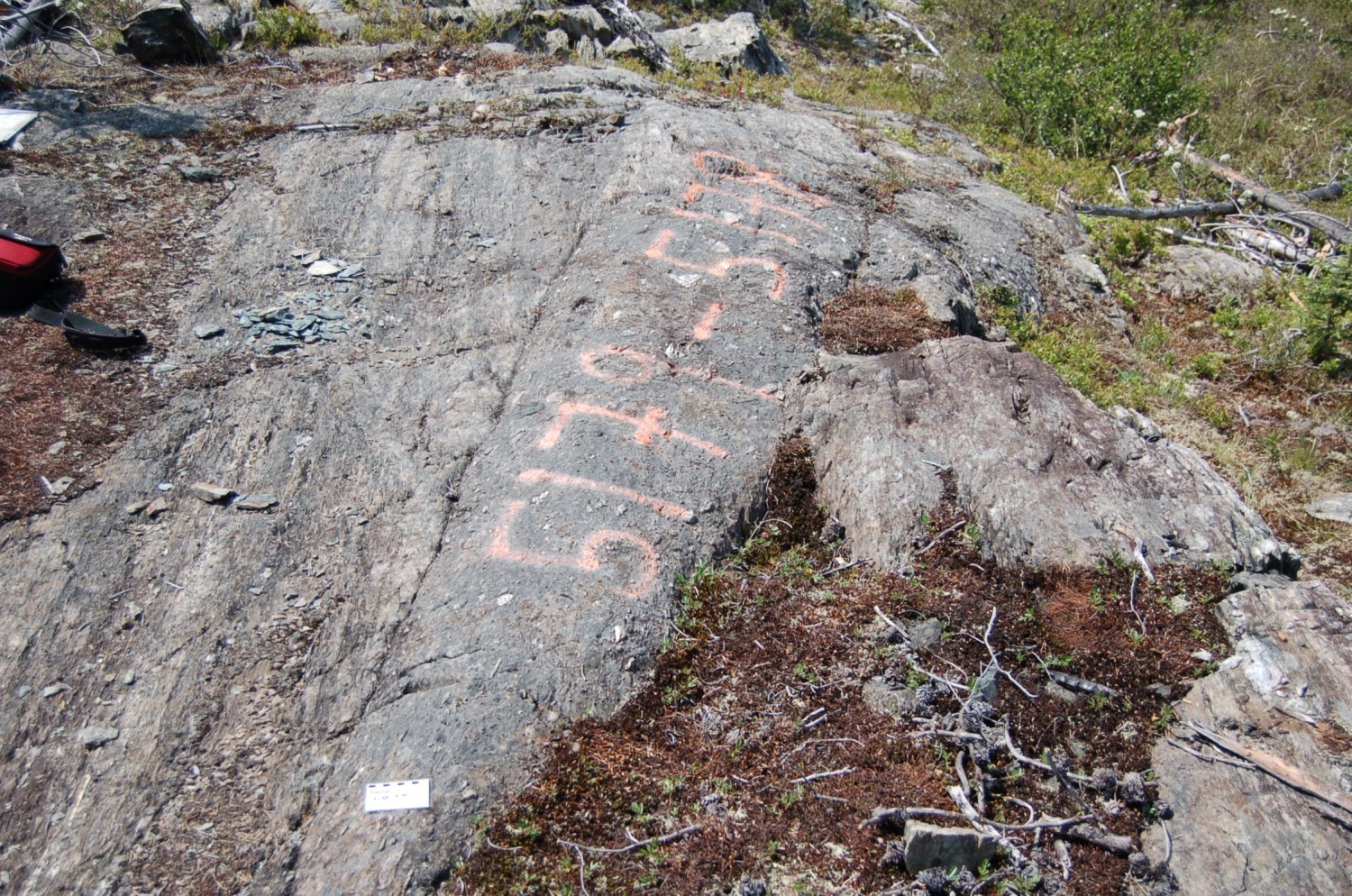 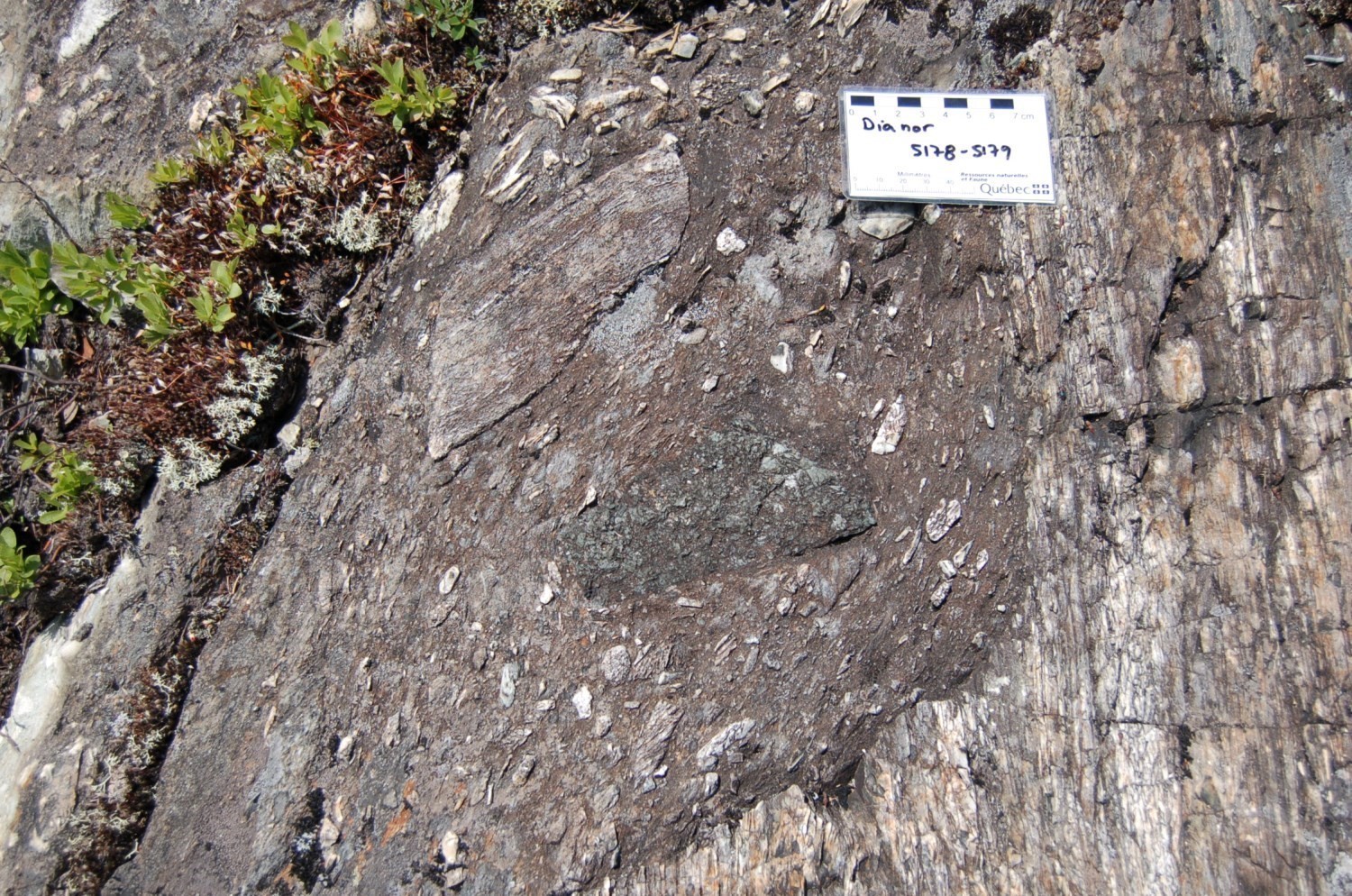 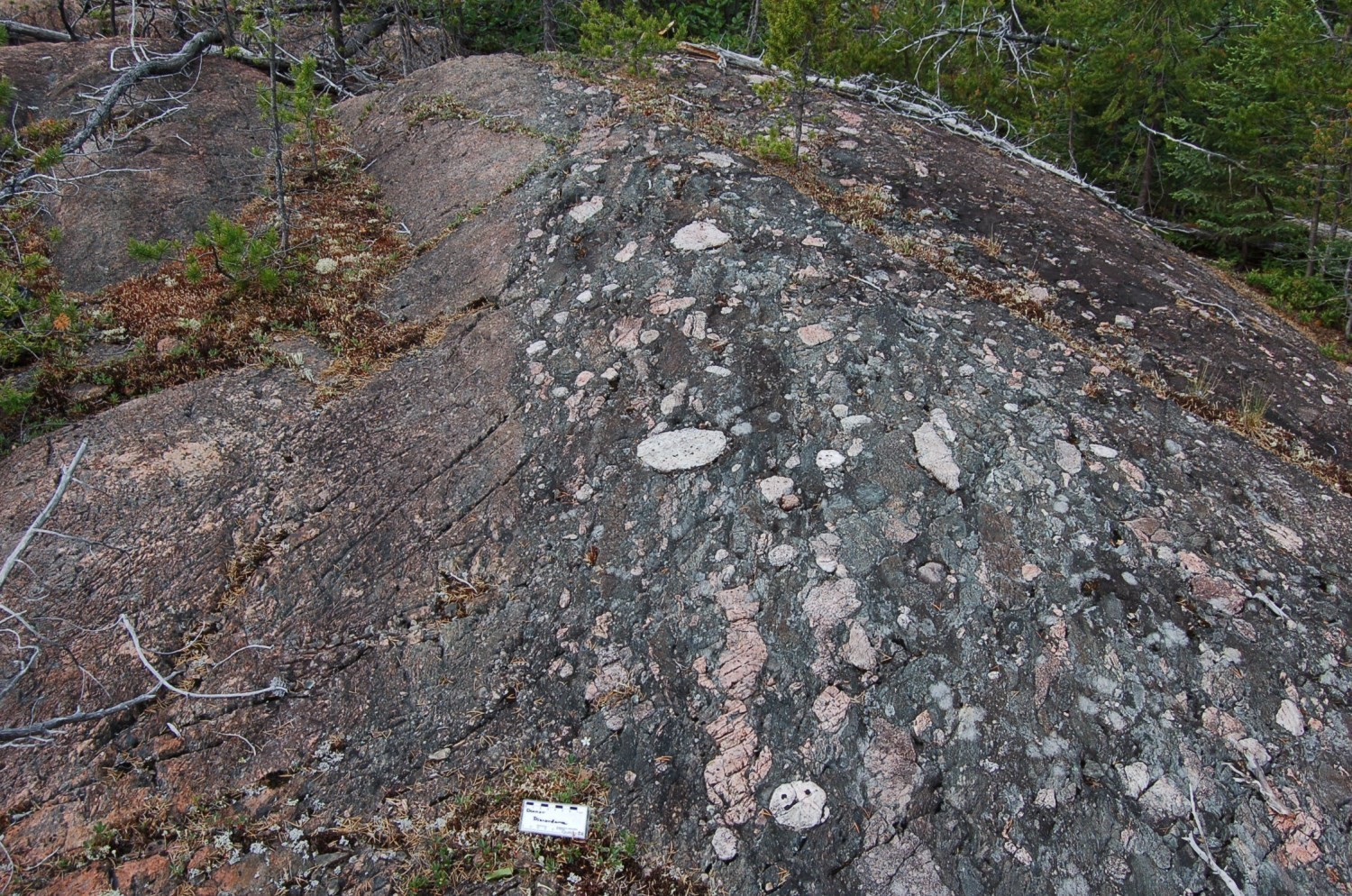 In 2019, Goutier assigned to the Yasinski Group several polygons of the Ekomiak Formation (unit nAek1) on the basis of stratigraphic relationships observed in sheets 33F05, 33F06 and 33G12. The presence of iron formation, the abundance of turbidites and basalt interstratification are characteristic of a deep marine environment, while clastic rocks of the Ekomiak Formation are associated with a fluviatile or alluvial environment. In addition, cross-cutting relationships between these former wacke-iron formation-conglomerate zones and a package of polymictic intrusive breccias and fragmented dykes, as well as with typical Ekomiak Formation polymictic conglomerate, show that polymictic conglomerate is in erosional discordance with the first two packages. The main differences of the polymictic intrusive breccia and fragmented dyke or dyke-diatreme package are: the intrusive nature of these rocks with the host rock; and the presence of ultramafic fragments with reaction rim and an intermediate to ultramafic matrix, mainly of magmatic origin (Mathieu et al., 2018). Polymictic conglomerate of the Ekomiak Formation is characterized by the abundance of tonalitic clasts and a quartzofeldspathic to lithic matrix.

The Ekomiak Formation consists of three packages: the first is dominated by a lithic wacke; the second is dominated by a polymictic conglomerate; and the third, undifferentiated, includes both wacke and polymictic conglomerate. This undifferentiated package is used when the amount of detail is insufficient or the intensity of deformation is very high.

The undifferentiated nAek unit consists of a package of polymictic conglomerate and wacke, but does not specify whether either is more abundant. For example, in sheet 33F11, the lack of data does not make it possible to determine which of the facies is predominant, since outcrops of the time are now covered by the Robert-Bourassa Reservoir. In the Chakapash Lake area (sheets 33F09 and 33G12), both facies are present. 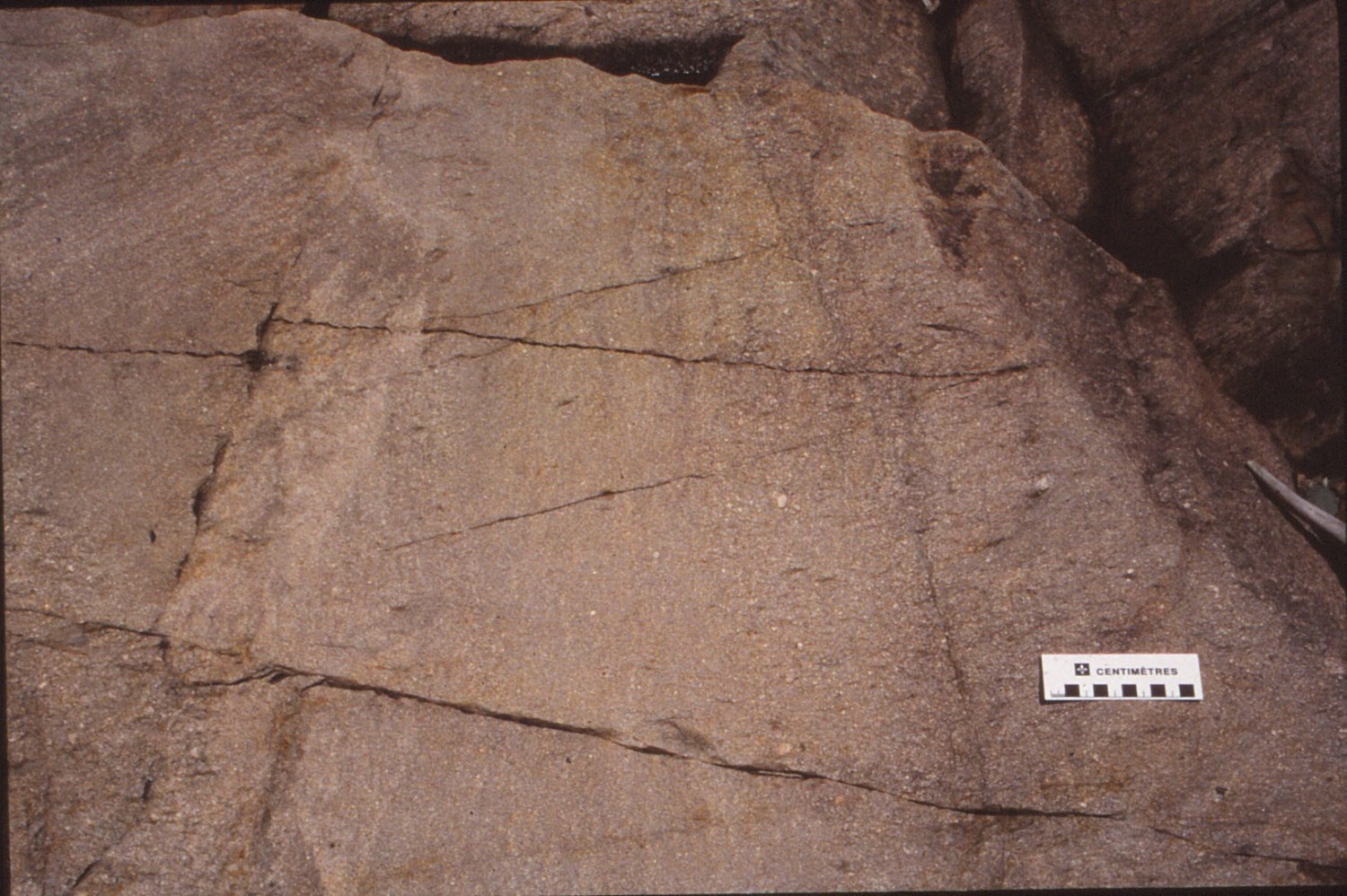 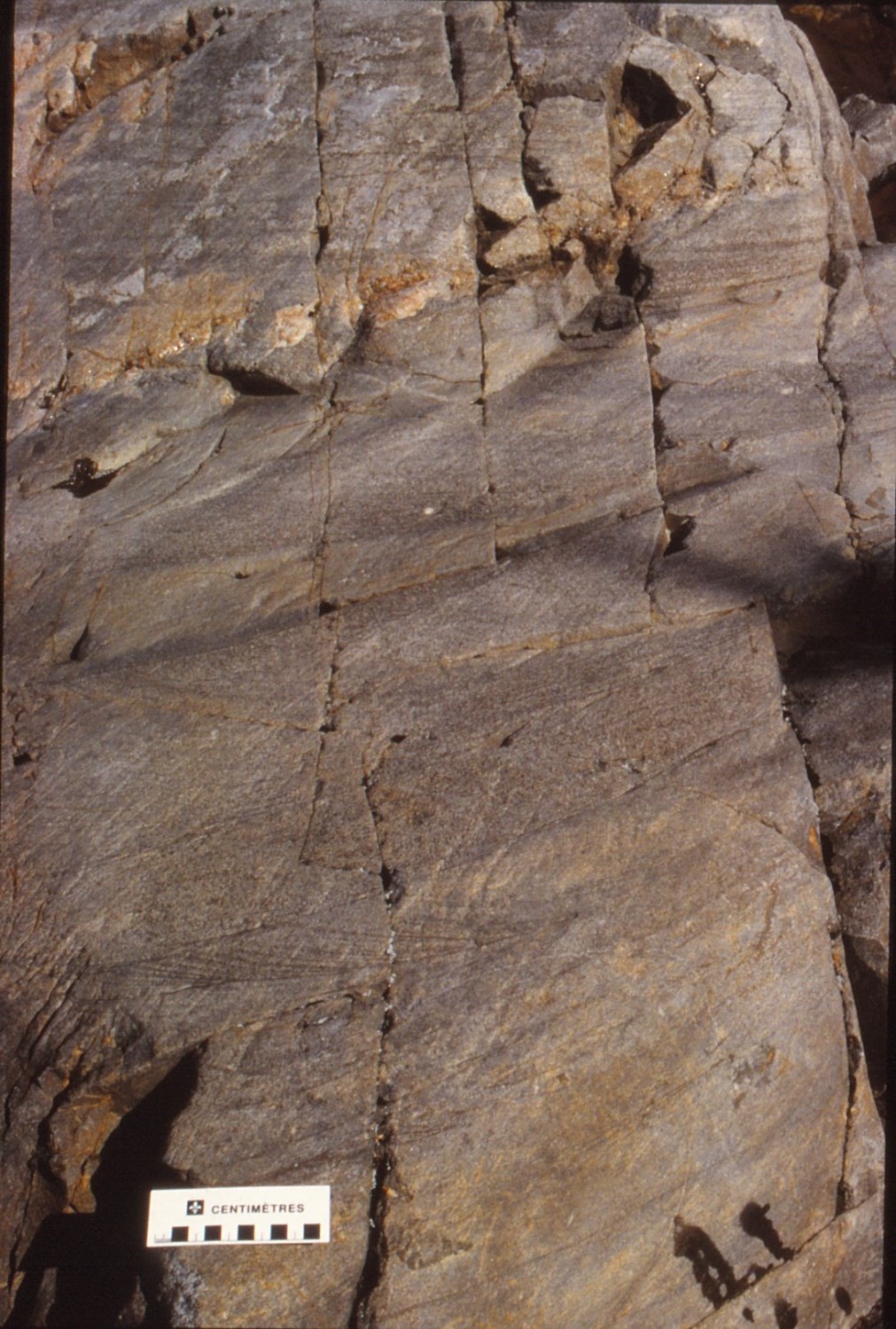 Lithic and feldspathic wackes and mudrocks (nAek1) are green, pink or brown depending on the amount of volcanic fragments or feldspar, hematite and chlorite contents. Wacke is composed of quartz, plagioclase, biotite and chlorite medium to coarse grains. Where sedimentary structures are better preserved, beds are thin to thick and sorted. Oblique laminations and parallel laminations are common. At the base of wacke beds, isolated tonalite cobbles and pebbles are locally observed, as are scarce mudrock horizons. The unit is distinguished from the Laguiche Complex (nAlgi) paragneiss by the absence of recrystallization and the presence of sedimentary structures suggesting a fluviatile or alluvial environment. 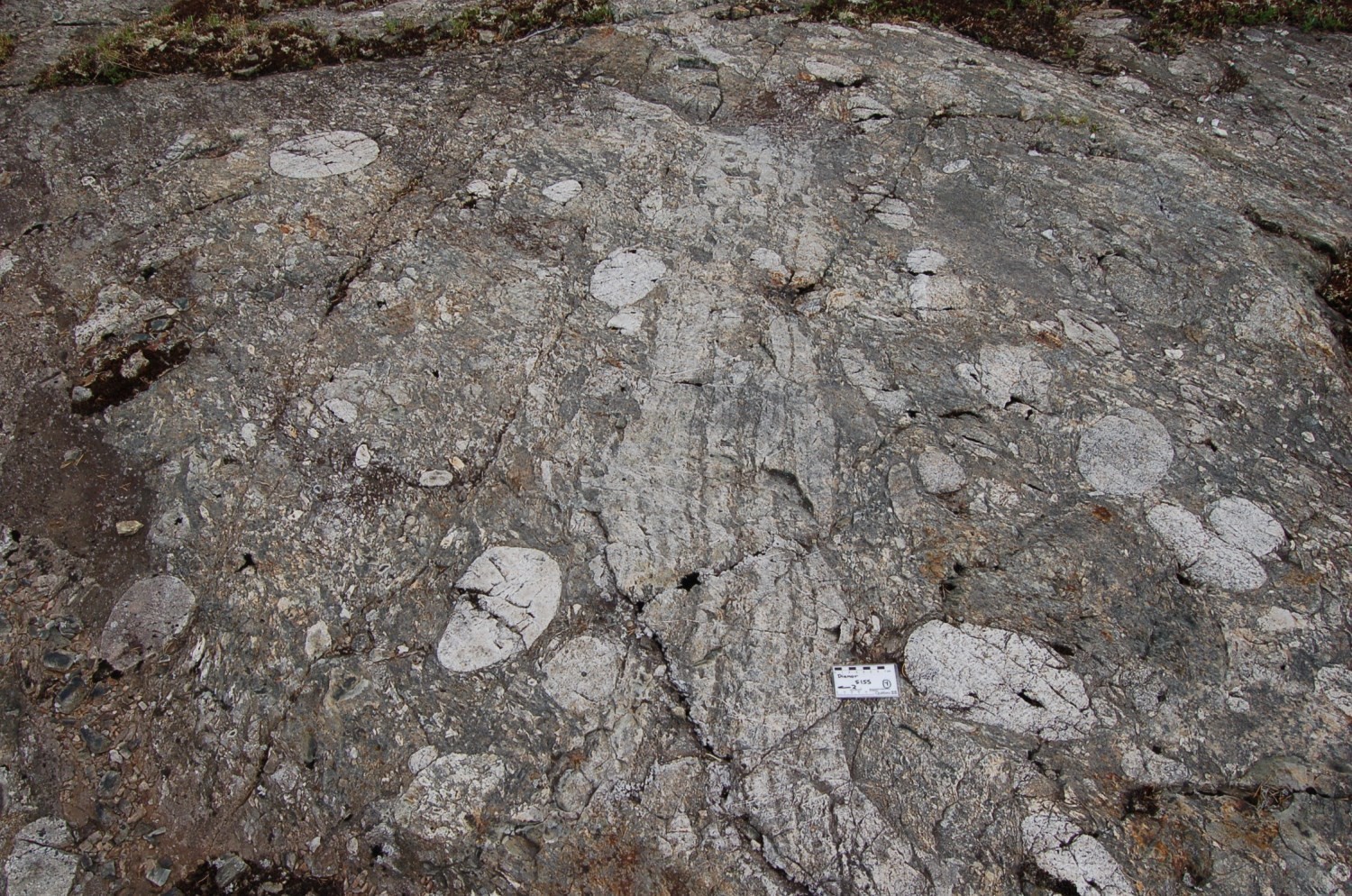 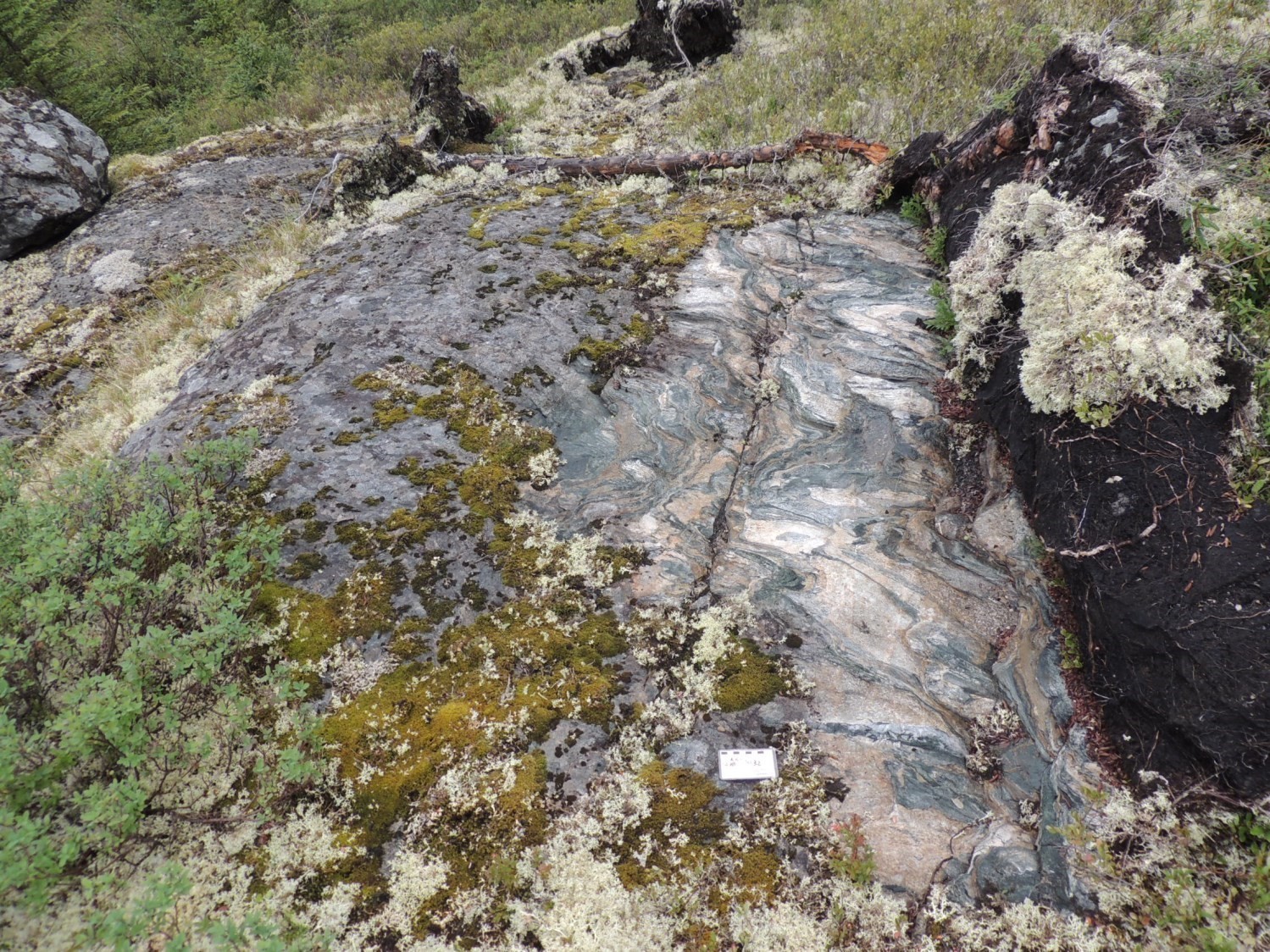 The basal conglomerate is overlain by a polymictic conglomerate composed mainly of cobbles and pebbles of mafic and intermediate volcanics, tonalite, gabbro, iron formation and locally quartz. It is dark green to pinkish, with the pinkish patina being caused by oxidation of eroded iron formation clasts. Fragments are poorly sorted, joint and subangular. Beds locally show normal sorting and their thickness is irregular. The matrix consists of feldspar, quartz and small fragments of mafic volcanics.

The second, more abundant and characteristic conglomerate facies is distinguished from the first by an abundance of cobbles, pebbles and rounded blocks of weakly deformed to foliated tonalite. Other clasts originate from erosion of volcanics, mafic, intermediate and felsic intrusions, quartz and iron formation. Clasts are often oval because of deformation. The matrix is typically a lithic wacke. This conglomerate is observed in massive beds (decimetric to metric) and scarcely shows obvious internal structures. Wacke lenses are interstratified with the conglomerate. The variety of clasts, sedimentary structures of the polymictic conglomerate and arrangement of wacke lenses indicate a dynamic regime, likely in a fluviatile or alluvial environment.

On the edge of the Chain Lake Fault, east of the TA-26 dike (sheet 33G12), wacke and conglomerate are occasionally beige to orange due to ankerite and sericite alteration. These rocks also show polarity inversions related to folding.

The various clastic sedimentary rock lenses of the Ekomiak Formation are distributed over a distance of 166 km along an E-W axis. In the 1990s, Goutier et al. (1998a, b) associated brecciated and polymictic rocks, as well as wacke, from the Ekomiak Lake area to the formation of the same name. A further study of the area’s outcrops in 2008 (J. Goutier) allowed the wacke to be associated with the Yasinski Group and to recognize that the majority of brecciated and polymictic rocks were diatremes and intrusive phases, not conglomerates.

Combining the old wacke–iron formation–conglomerate lenses of unit nAek1 (sheets 33F05 and 33F06) with the Yasinski Group reduces the volume of the unit in this area. The area north of Menarik Lake continues to be one of the places with the largest volume of polymictic conglomerates of the Ekomiak Formation. The lower intensity of deformation and metamorphism in this area makes it one of the places where this formation is best preserved.

In sheets 33F09, 33F10 and 33F11, clastic rocks of the Ekomiak Formation form kilometric bands, ranging in thickness from 100 to 200 m, locally up to 1 km of apparent thickness. They were recognized south of the La-Grande-Sud Tonalite (sheet 33F10), in the centre and NE of sheet 33F09 and in sheet 33G12. In the centre of sheet 33F09, the Ekomiak Formation forms narrow strips bordered by faults. In contrast, the formation is limited to a few outcrops in the Robert-Bourassa Reservoir (sheet 33F11) and a thin strip in the SW corner of sheet 33F11. In sheets 33G06 to 33G11, strips are narrower due to tectonic transposition and the limited number of outcrops visited.

A weakly deformed polymictic conglomerate was sampled in sheet 33F06 in 1999 (outcrop 1996-JG-1390) to determine the maximum sedimentation age for this unit. The sample consists mainly of low-deformed tonalite and basalt cobbles and pebbles, with clasts of rhyolite, fine-grained felsic intrusive rock and grey and black chert (iron formation). The matrix is green and rich in granules and small mafic pebbles. Horizons of lithic wacke are interstratified with the conglomerate. At that time, a zircon had given a 207Pb/206Pb age of 2747 ±2 Ma, the maximum age of deposition of this unit by the TIMS method (Goutier et al., 2002). Subsequently, more zircons of the same sample were reanalyzed with the laser technique (LA-ICPMS) (Davis et al., 2014), giving a main mode around 2735 Ma, with secondary modes at 2810 Ma and 2855 Ma, as well as a concordant zircon as young as 2714 ±9 Ma (SGNO-00-25; Davis et al., 2014). This age-specific distribution suggests that detrital material typically originates from rock erosion in the Yasinski Lake area, where this conglomerate is located. The main mode at 2735 Ma corresponds to the age of Yasinski Group and La Grande-Sud Tonalite volcanics. Secondary modes could come from erosion of rocks of the Langelier Complex and Guyer Group. The youngest concordant zircon (2714 Ma) is contemporaneous to the Duncan Intrusions (2716-2709 Ma). 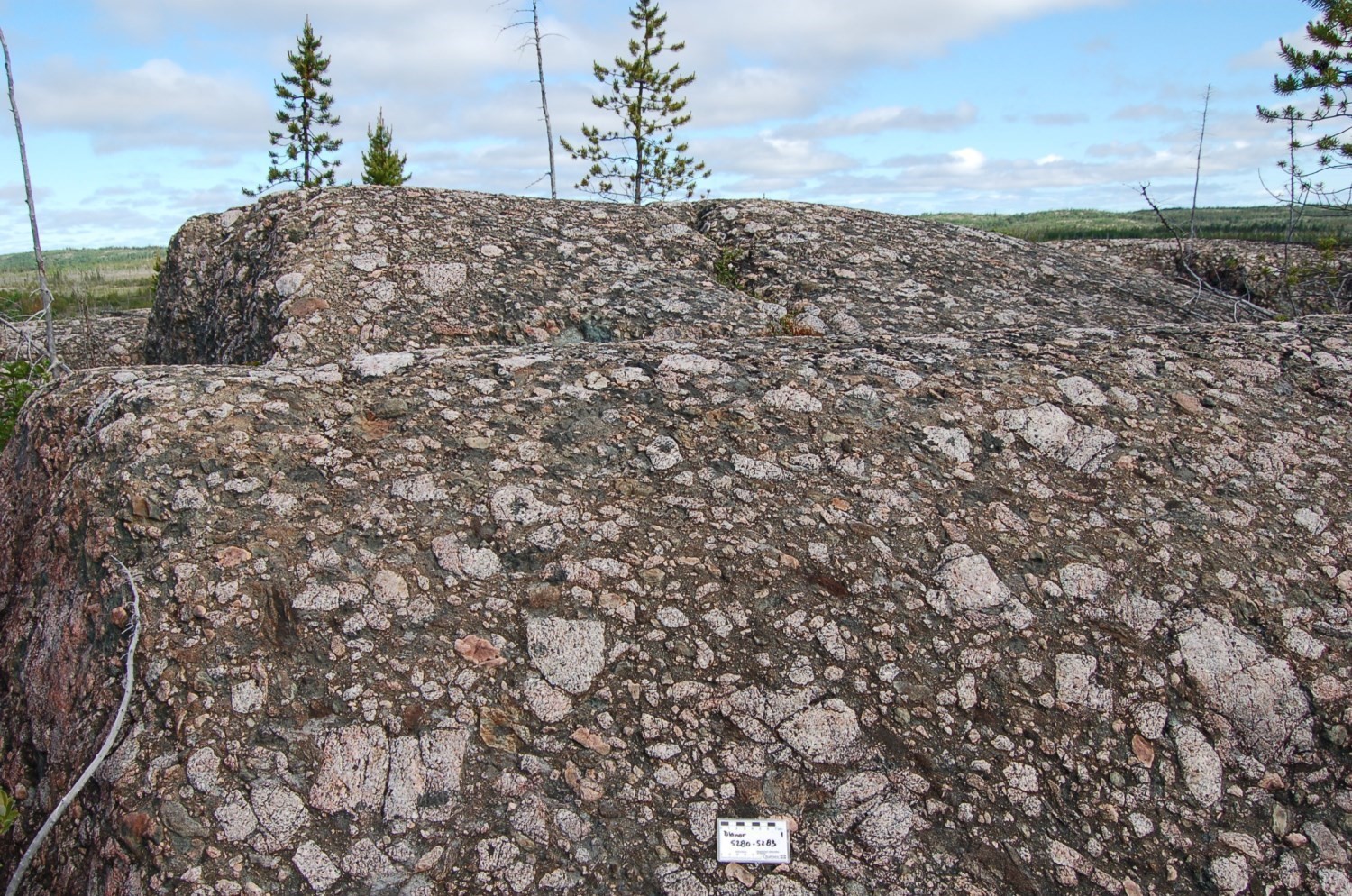 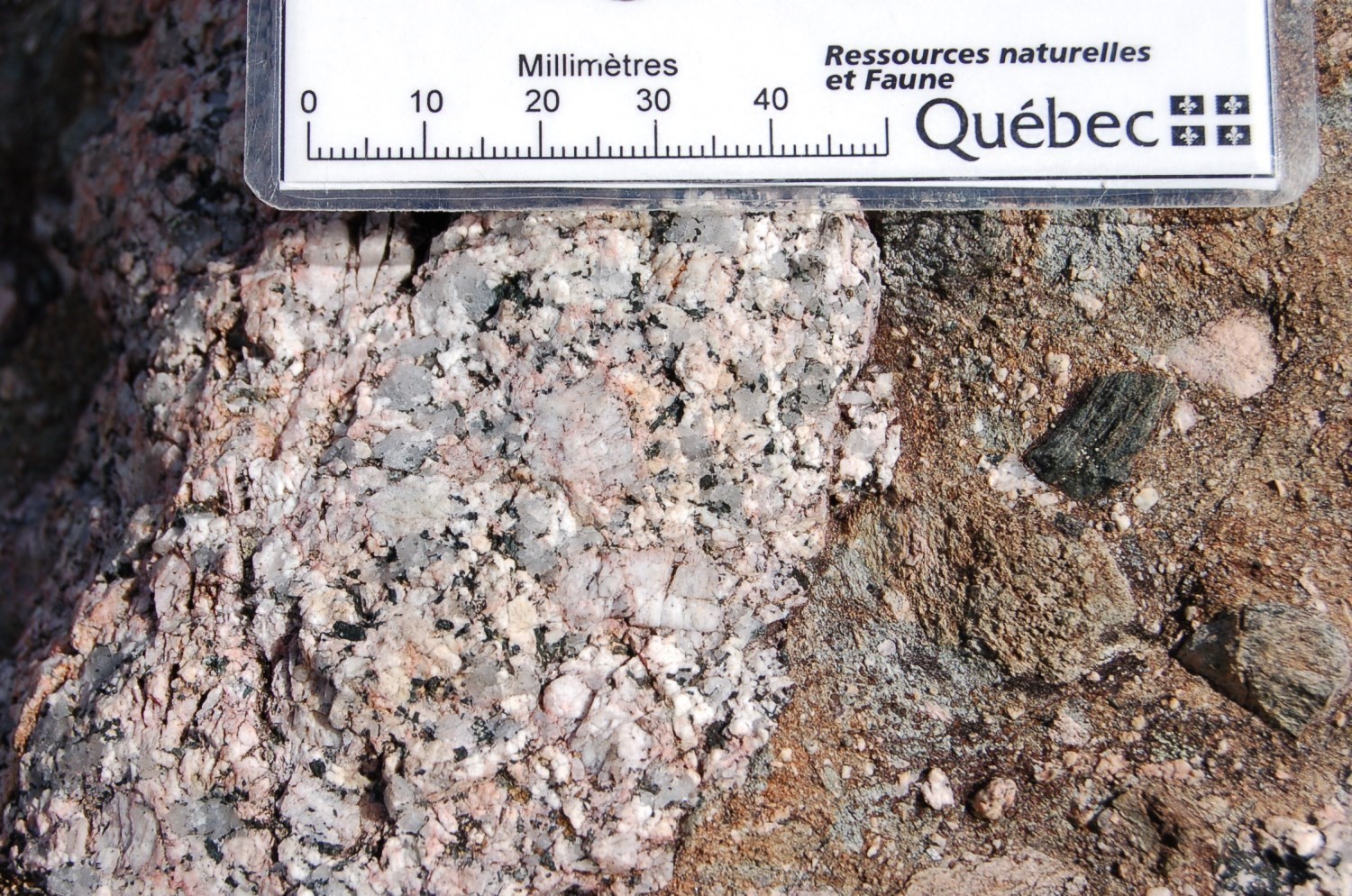 In sheet 33F06, it was possible to observe an angular discordance between conglomerate and basalts of the Yasinski Group and the wacke–iron formation–conglomerate unit of the Ekominak Formation. It is also clear that strips in the NE corner of sheet 33F09 (Chakapash Lake) and in sheet 33G12 unconformably overlie Yasinski Group volcanics. In the east, contacts are sheared and polymictic conglomerate is overlain by Guyer Group metabasalts (directly east of outcrop 2014-AR-4134).