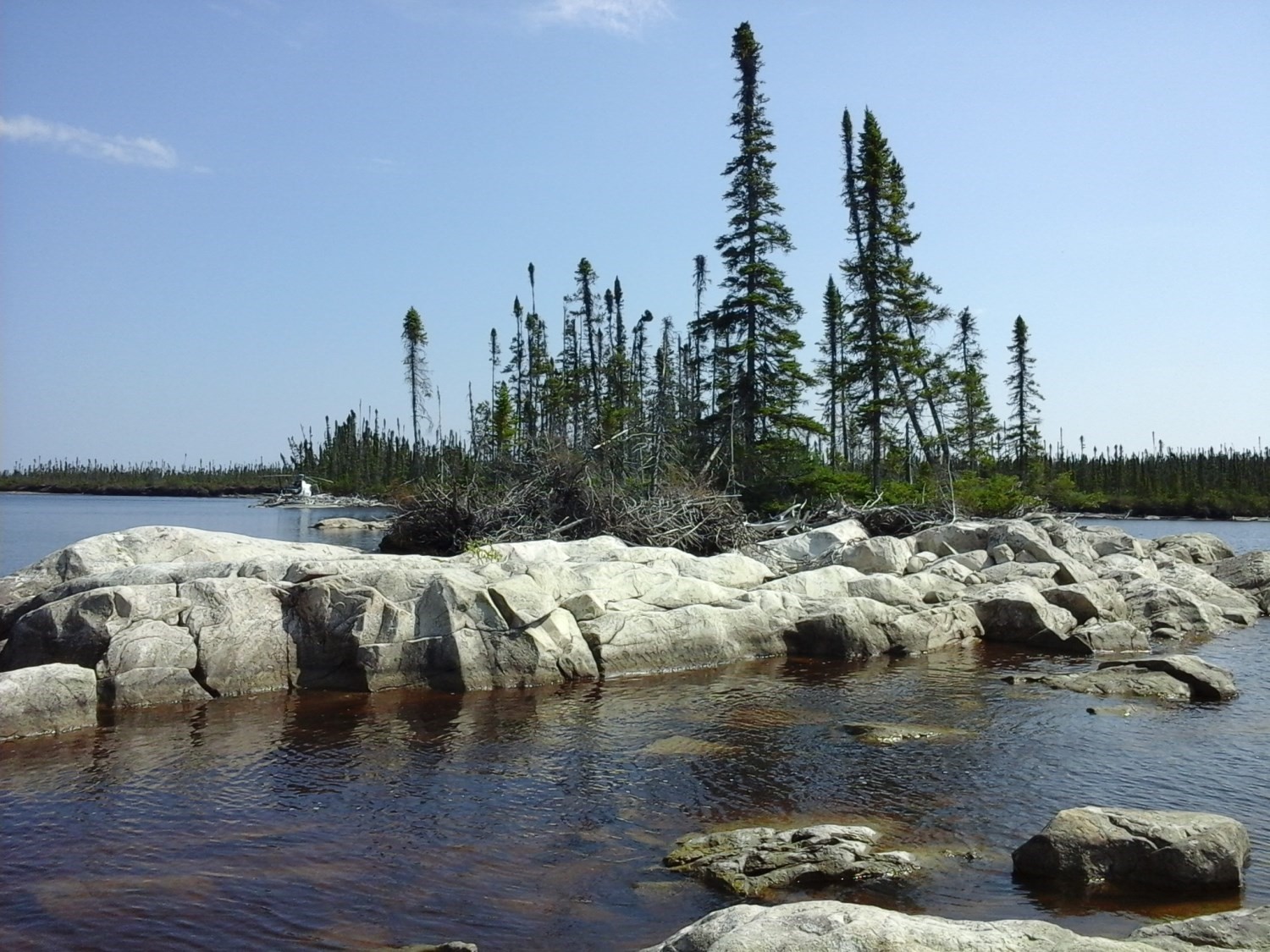 Early references to the Duncan Intrusions unit appeared in reports by Goutier et al. (1998a, 1998b) describing the geology of the Yasinski Lake area in the Eeyou Istchee James Bay region. The definition of these units has not changed since this first definition, only the occurrences of each of the informal subdivisions have been redefined and expanded and were presented in the reports of Goutier et al. (1999a, 1999b, 2000, 2001a, 2001b, 2002). The addition of a fourth unit (nAdcn4) was completed when this record of the Quebec Stratigraphic Lexicon was created in March 2018. It combines the informal felsic intrusion unit of the Robert-Bourassa Reservoir (NTS sheets 33F11 and 33F12) of Goutier et al. (1999a) and the porphyritic felsic dykes of the Menarik Lake area (sheet 33F06) of Goutier et al. (1998b).

Rocks of the Duncan Intrusions have a variable degree of deformation that is generally lower than the foliated tonalite of the Langelier Complex (Algl3). 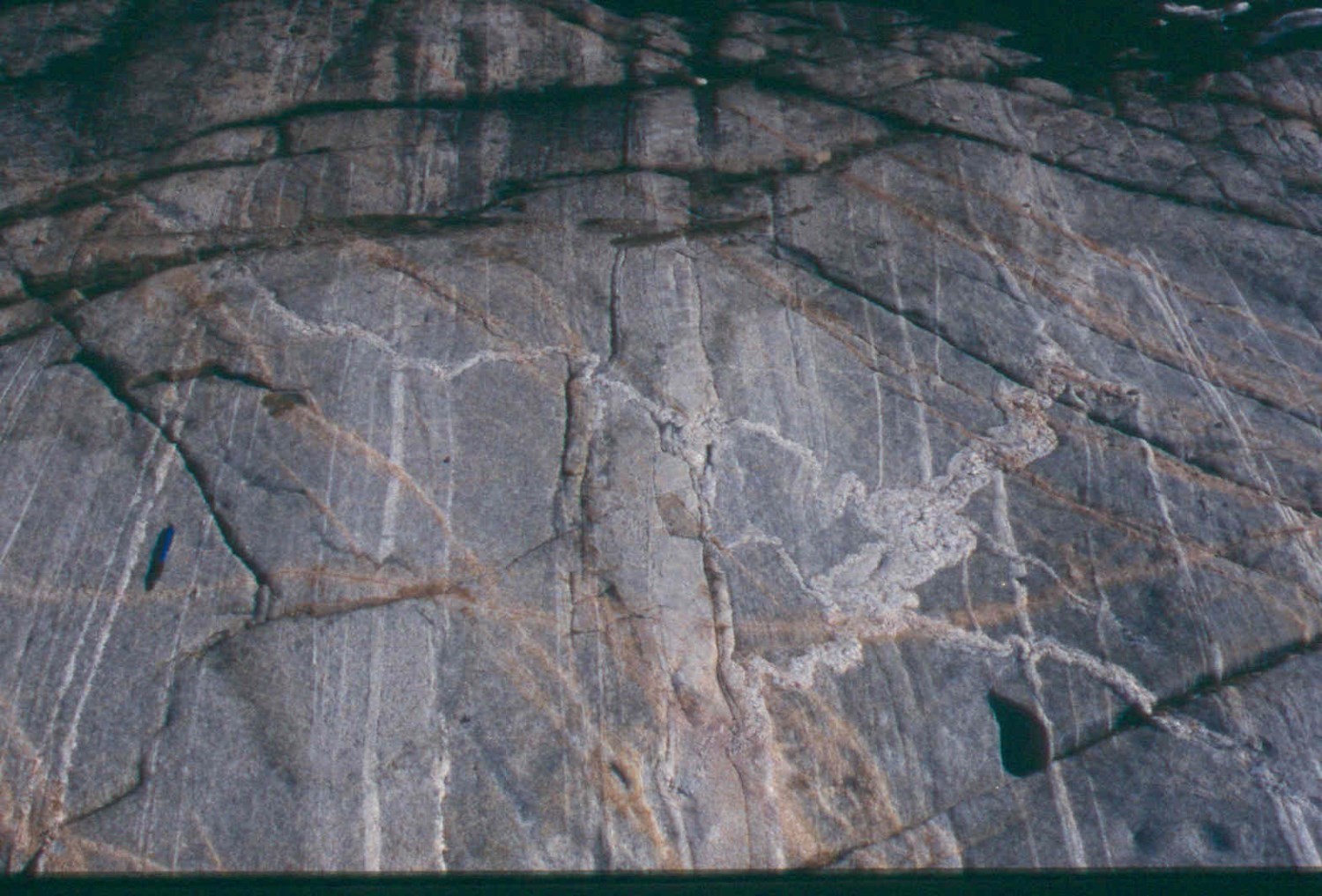 Unit nAdcn consists of geological areas that contain two or more lithologies from the different divisions of the Duncan Intrusions. These intrusions, which are tonalitic, dioritic, monzonitic and monzodioritic, are located near Bruce Lake (sheet 33F04), in the centre of sheet 33F15, in the southwest corner of sheet 33G11 and in the north portion of sheet 33G14. 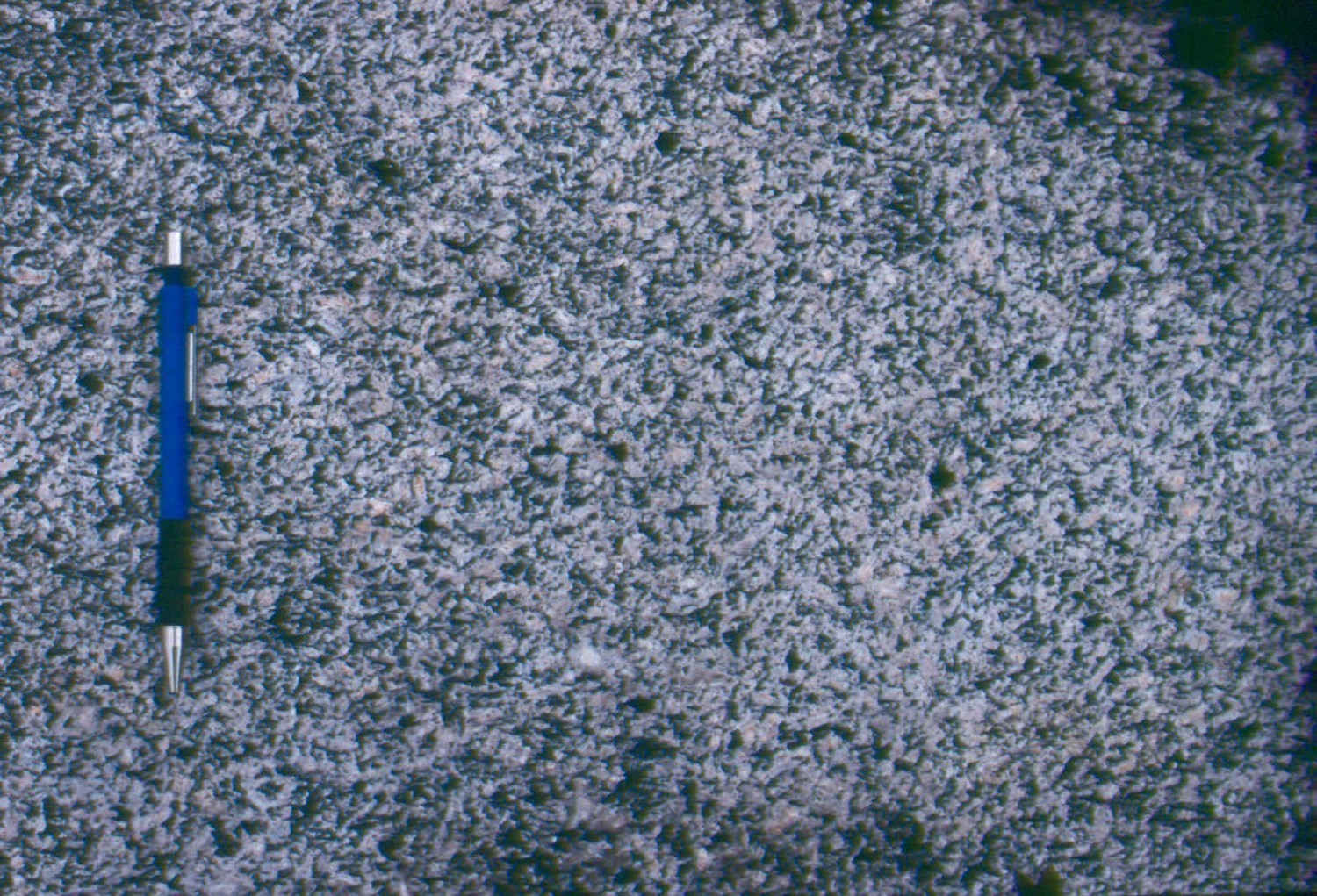 This unit, composed of hornblende and biotite tonalite, is distinguished from the tonalites of the Langelier Complex by a more homogeneous petrographic texture and lower deformation. This pink-grey tonalite has a white patina. It is medium-grained and composed of 40-50% plagioclase, 35-45% quartz and 5-15% hornblende and biotite. K-feldspar is less common (<10%). Acessory minerals include epidote, sphene and apatite (Goutier et al., 1998b). Local variations in ferromagnesian contents are observable. Tonalite usually exhibits tectonic foliation. This tonalite usually has a weaker magnetic signature than the adjacent rocks, allowing the shape of the plutons to be recognized, especially when under the water of the Robert-Bourassa and La Grande 3 reservoirs.

In sheets 33G12 (Goutier et al., 2001b) and 33F09 (Goutier et al., 2001a), a biotite and hornblende tonalite has the peculiarity of having 5 to 10 mm quartz phencrystals, which appear in positive relief on outcrops. Its patina is pink beige and its fresh surface is green-grey to red, depending on hematitization of the rock. There is little ductile deformation. On the other hand, fractures are numerous and filled with epidote and quartz. This late tonalite contains basalt and iron formation enclaves.

Local intrusions of hornblende granodiorite are also part of this unit (see Figure 5, Goutier et al., 2001). The largest is in the Astrée Lake area (sheet 33F05). It is an undeformed medium-grained pink granodiorite. The peculiarity of this lithology is the presence of euhedral and stocky crystals of plagioclase (Goutier et al., 1998b). 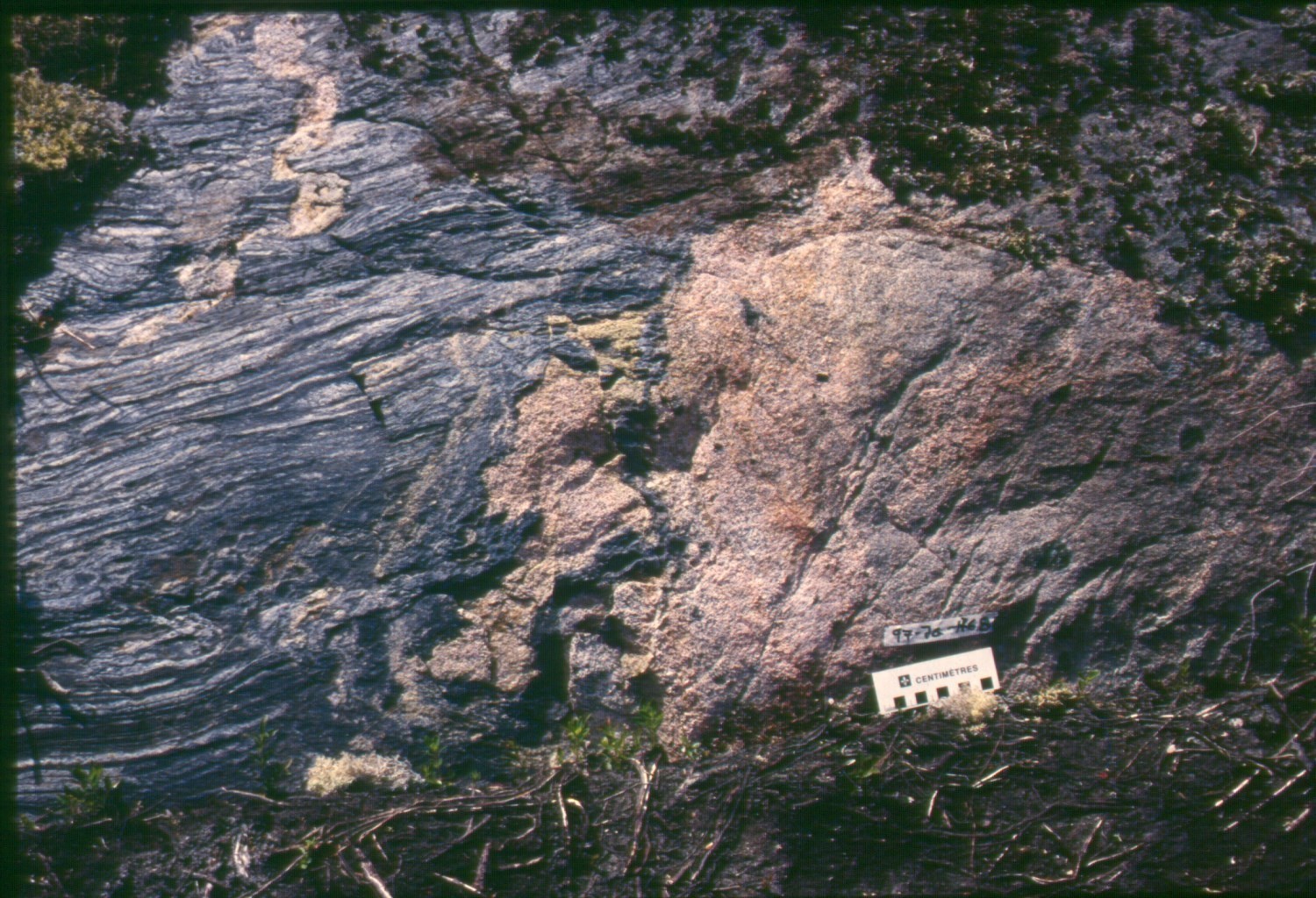 Unit nAdcn2 is more mafic than hornblende and biotite tonalite (Adcn1). Quartz is less present while hornblende represents more than 30% of the rock and biotite is also less abundant. Contacts between units nAdcn1 and nAdcn2 are generally gradual in nature (Goutier et al., 1998b). The overall colour of the rock, dioritic, is darker than that of the tonalite. Rock is fine to medium-grained. Accessory minerals such as magnetite and titanite are present (Goutier et al., 2002).

At the edge of the La Grande 3 Reservoir, a quartz diorite with plagioclase cut by similar dykes is also associated with unit nAdcn2. It has a grey to ash-rose patina with millimetric plagioclase phenocrystals in an aphanitic matrix. Hematitized volcanic fragments and biotite and hornblende phenocrystals are also visible (Goutier et al., 2001). 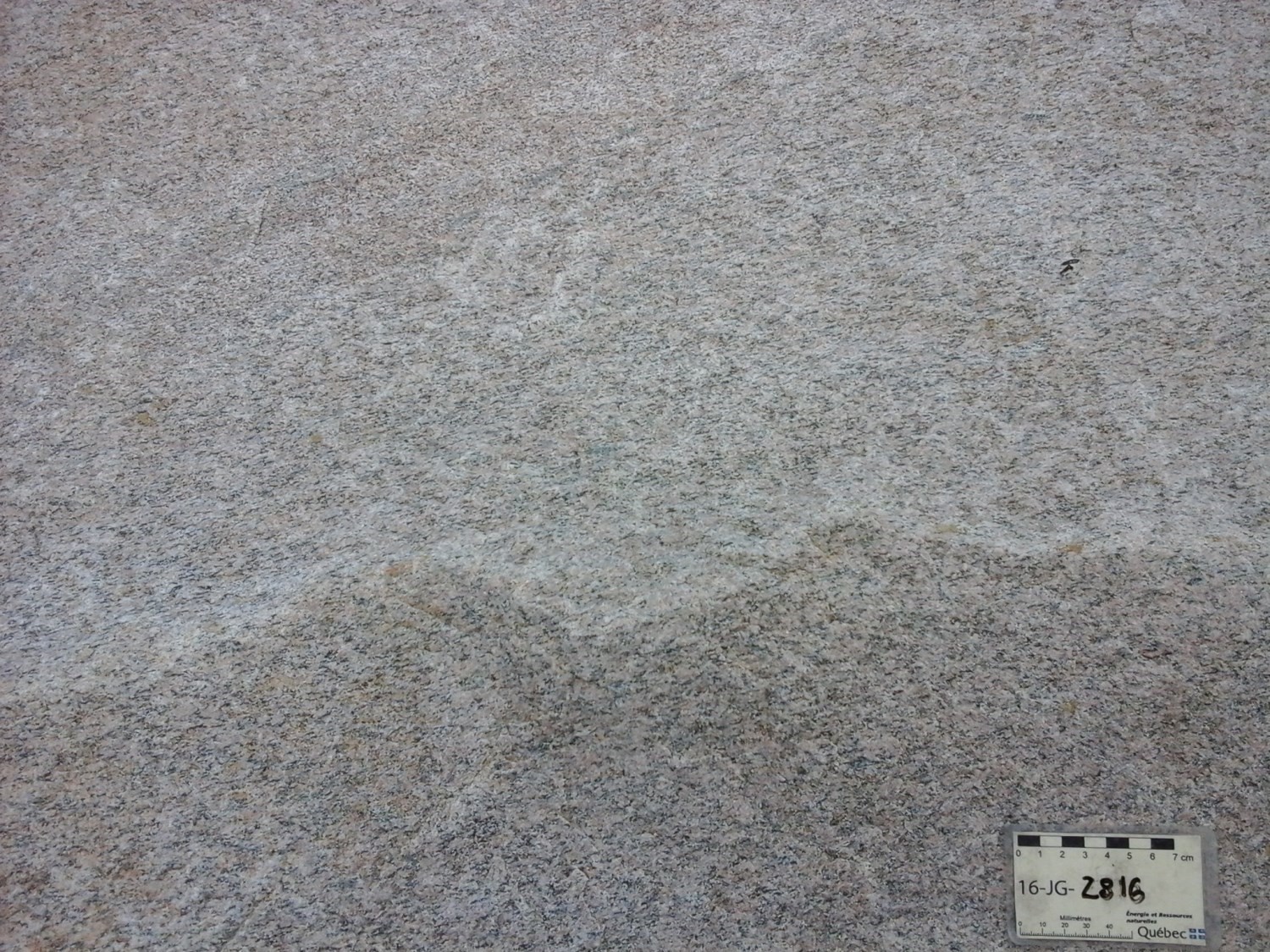 Unit nAdcn3 consists of hornblende monzonite, monzodiorite and quartz monzodiorite, and syenite. The proportion of each of these lithologies varies from geological area to geological area. This unit has a stronger magnetic susceptibility than previous units, allowing for proper contours. Hornblende monzodiorite is composed of 65% anhedral plagioclase, 25% subhedral green hornblende and 10% K-feldspar. The epidote and biotite that crystallize around hornblende may be associated with retrograde metamorphism. In general, monzodiorite is much less deformed than units nAdcn1 and nAdcn2 (Goutier et al., 1998b).

A hornblende monzonite and quartz monzodiorite are also associated with unit nAdcn3. They are poorly deformed and may contain sheared basalt enclaves. Monzonite is pink, medium-grained and quartz monzodiorite is K-feldspar porphyritic, grey to pinkish and medium-grained. Typical composition includes 30-45% hornblende, 45-50% plagioclase, 20% K-feldspar and 5-10% quartz. In general, differentiation between these different lithologies of unit nAdcn3 is done using feldspaths potassium cobaltinitrite stains, as it is difficult to observe differences in the field.

The dated porphyritic monzonite of Menarik Lake exhibits a texture rich in plagioclase and coarser K-feldspar phenocrystals in a fine matrix rich in ferromagnesian minerals. Two geological areas of syenite are also associated with unit Adcn3. They intrude rocks of the Yasinski Group south of Missisakhegin Lake (sheet 33F05). 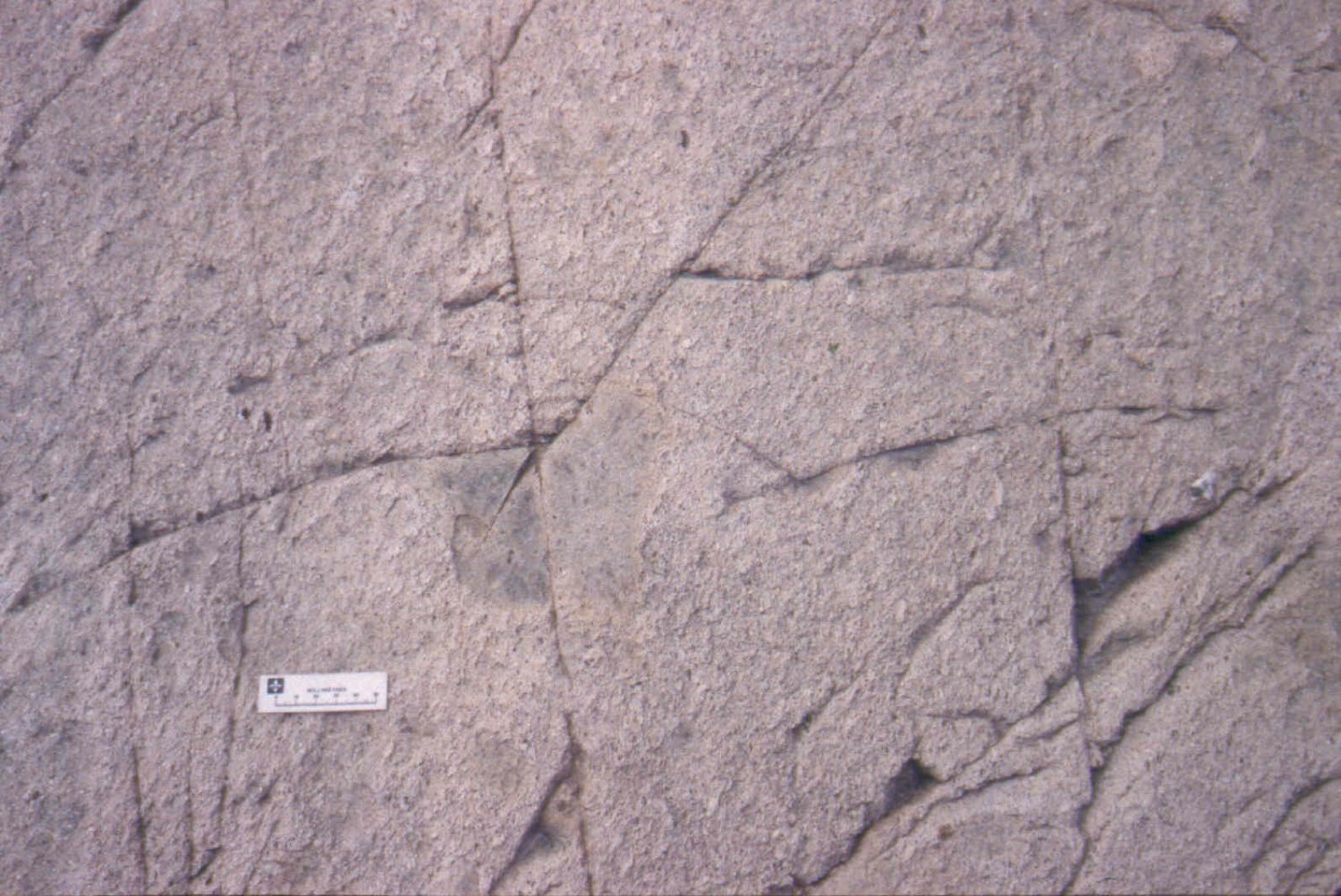 The stocks and dykes of the felsic intrusion of the Robert-Bourassa Reservoir intrude the mylonitized basalts in the dextral ESE shear zone, in the centre of sheet 33F11. These rocks had previously been interpreted as tuffs (Mills, 1967; Gauthier, 1996; Gauthier et al., 1997). In addition, Gauthier (1996) and Gauthier et al. (1997) assigned these rocks to the Rossignol-Laguiche Group base in their stratigraphic correlation pattern (LG-2 Reservoir sector column, former Long Lake). The field work showed that they were small intrusions, with no bedding structure, and were younger than much of the deformation of volcanics. The rock is pale pink to white. It has a porphyritic texture of plagioclase phenocrystals in an aphanitic matrix. The dykes are centimetric to metric and intruded parallel to the foliation of the basalts. According to geochemical analyses, these felsic dykes have a granitic composition. The age of 2709 +6/-4 Ma is interpreted as the age of intrusion. These rocks cannot be part of the old Rossignol-Laguiche Group by their nature (not tuffs), their geographic position (too far north), and their intrusive stratigraphic relationship in mylonitized basalts.

Porphyritic felsic intrusions in the Menarik Lake area are now associated with unit nAdcn4. They appear as dykes in the fault zones along the edge of Ekomiak Lake (sheets 33F05 and 33F06). The largest dyke is 250 m thick. It is stuck in a 5 km fault zone (sheets 33F05 and 33F06). Dykes resemble the syntectonic and porphyritic trondhjemite dykes of the Porcupine-Destor Fault Zone (Goutier, 1997). They are greenish with a red tint and are composed of millimetric phenocrystals of plagioclase (15-25%) and quartz (5%) in an aphanitic matrix. The patina varies from beige to brown due to alteration in sericite, carbonates and chlorite. Disseminated pyrite is also present. The rock is not magnetic and is well-foliated. 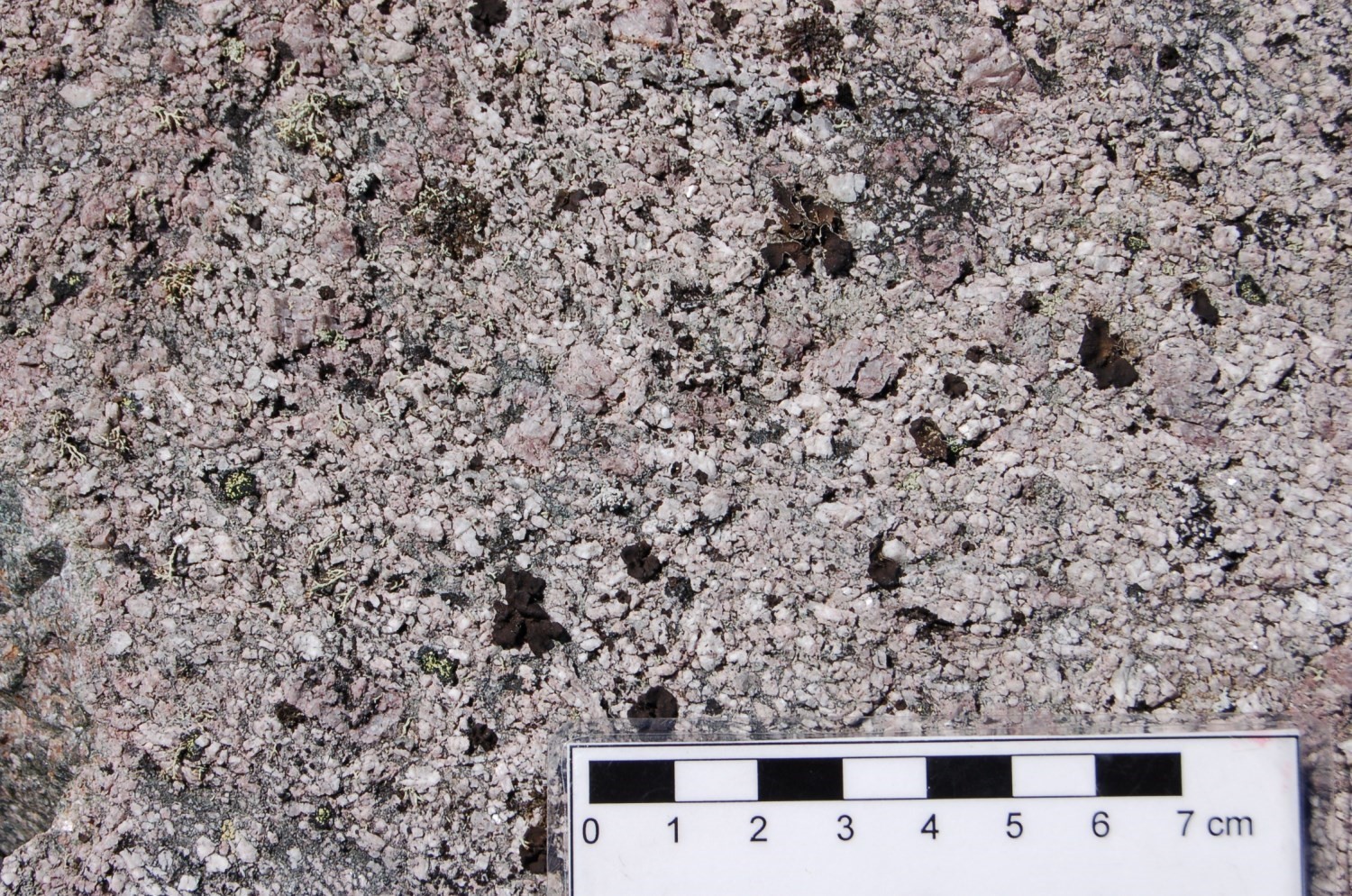 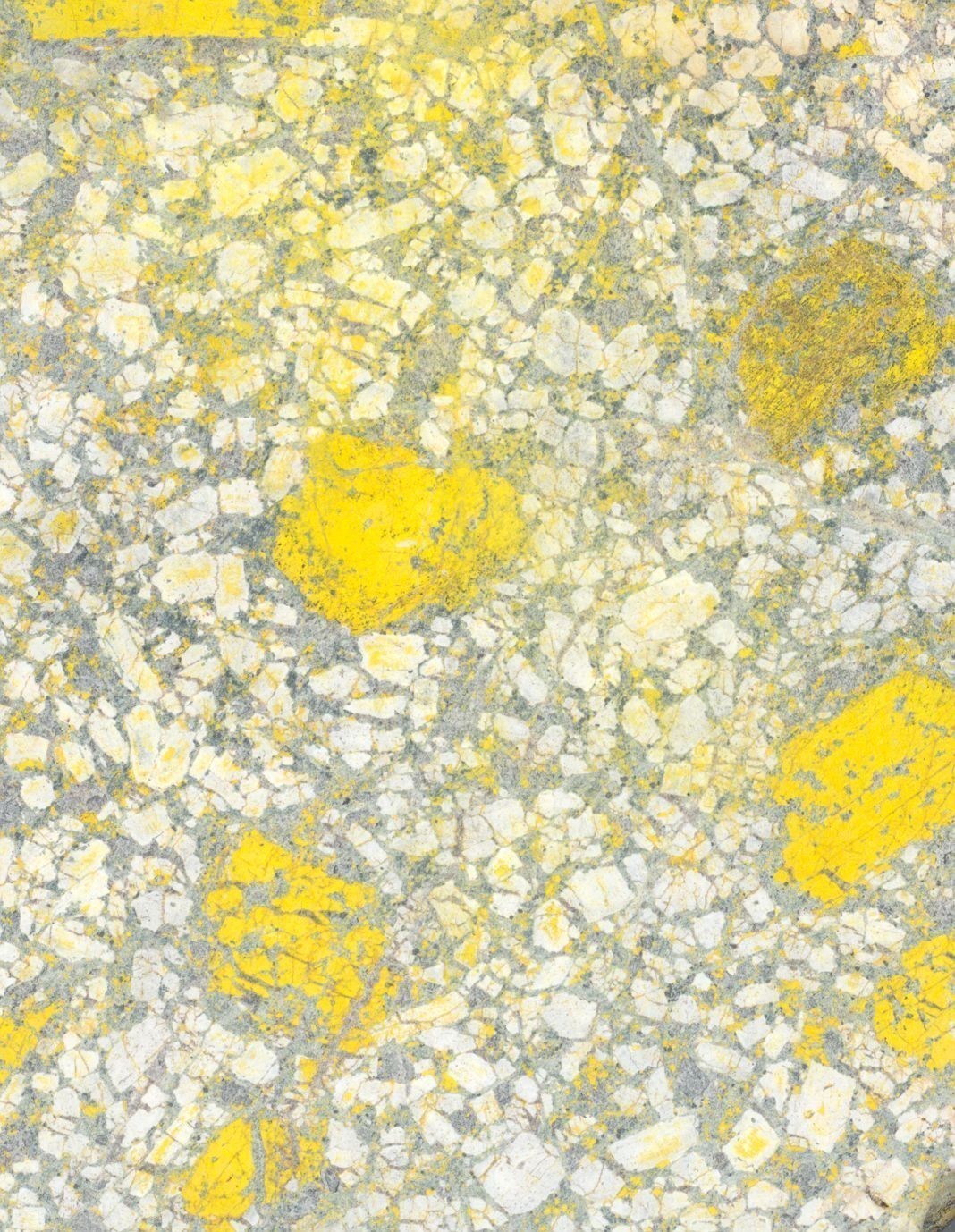 The Duncan Intrusions intrude most of the units older than 2709 Ma present in the sheets 33F and 33G area. They cut structural grain in several places, either in outcrop or on the map, as in the Shpogan Lake area (sheet 33F03). They are cut by younger granitic intrusions, such as the Lac Taylor Pluton and the Vieux Comptoir Granitic Suite. They are also cut by different swarms of Neoarchean and Paleoproterozoic diabase dykes.

Some of the Duncan Intrusions are either unconformably covered by the Sakami Formation or in normal fault contact with the same formation.