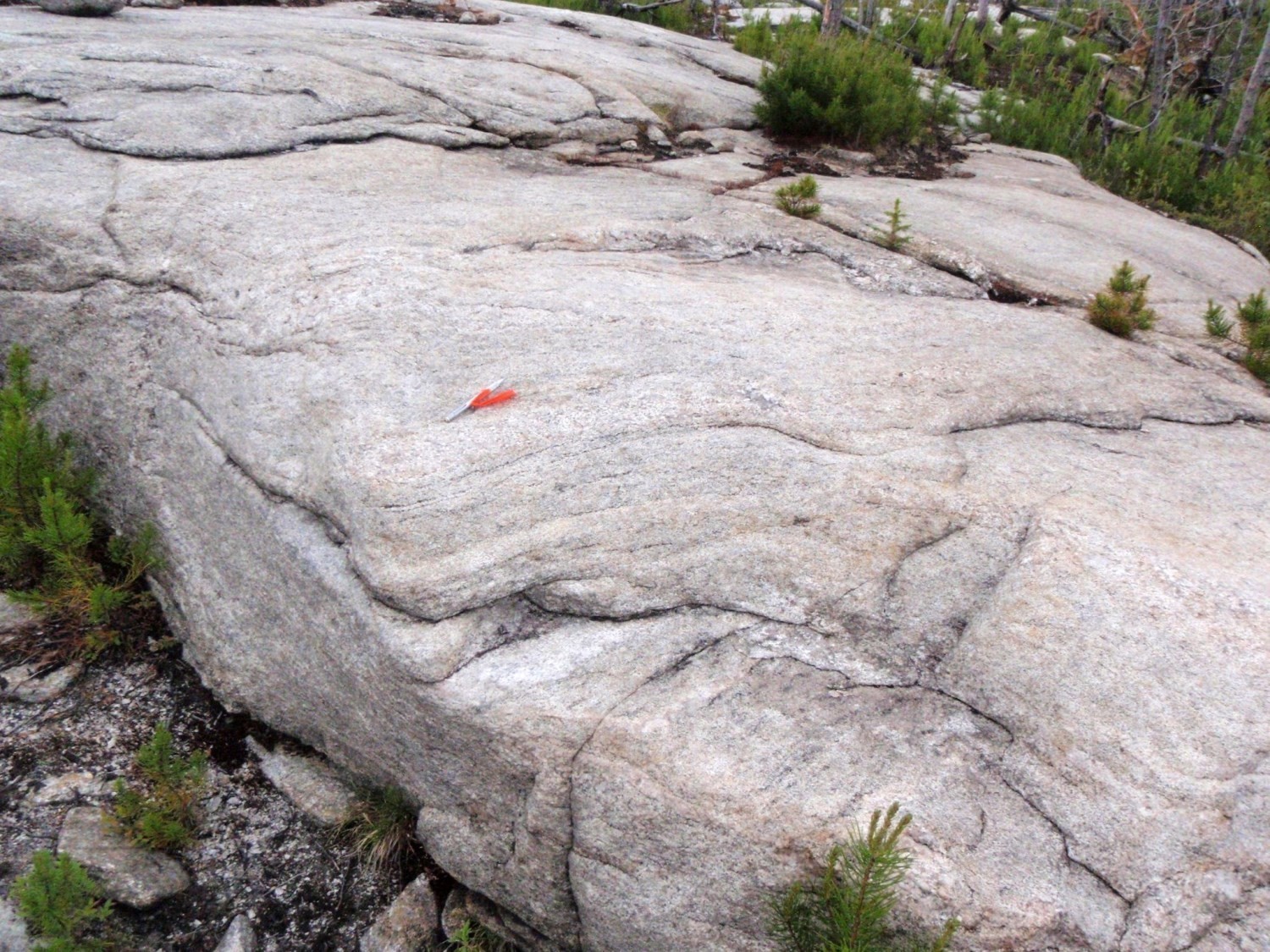 The table below outlines the Champion Complex units that have been reassigned to the Hutte Complex: 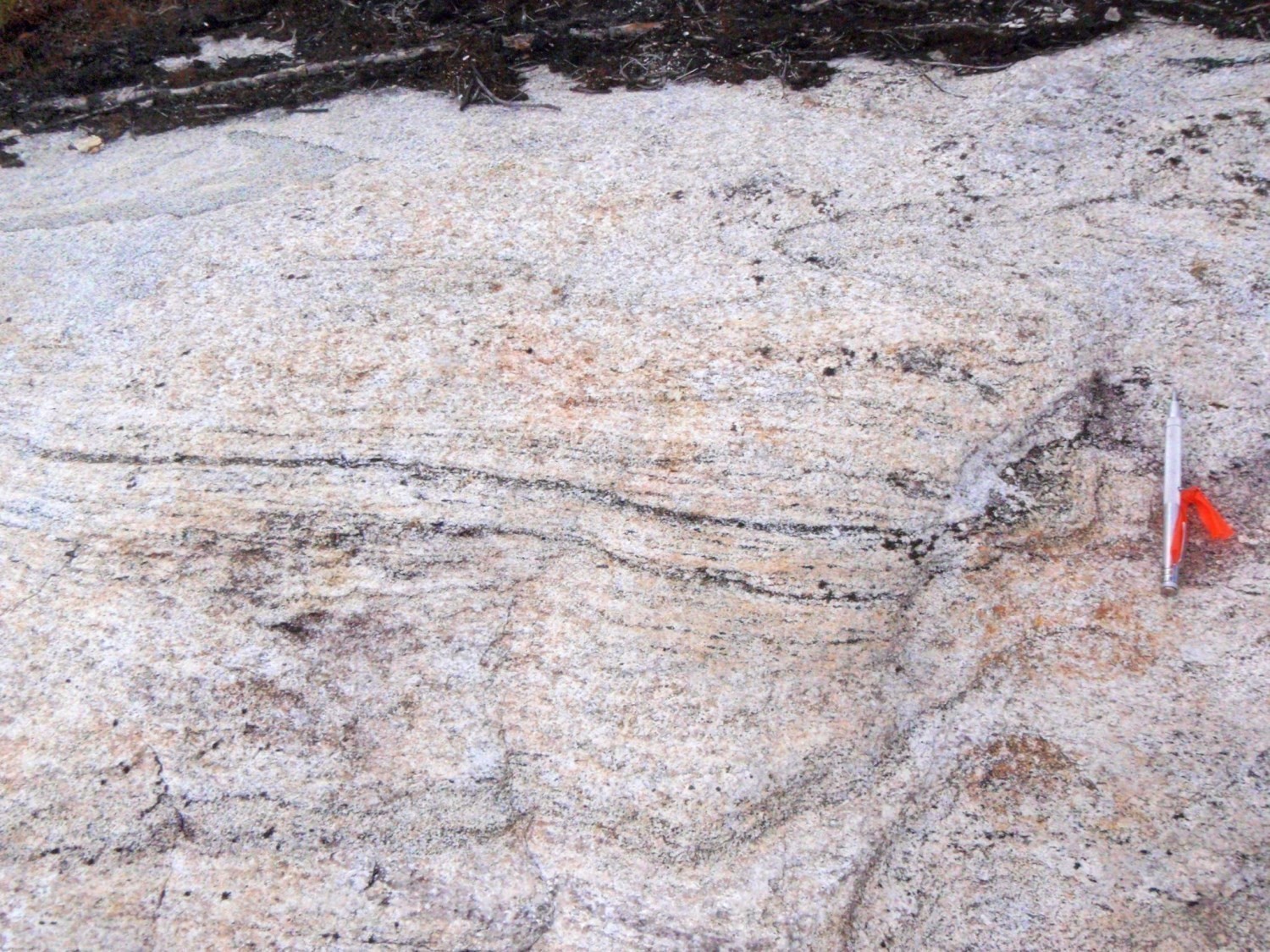 Tonalitic gneiss are white in altered surface and greyish in fresh exposure. Most are medium grained, locally coarse grained and very locally fine grained. These gneiss are homogeneous in some areas, whereas they are heterogeneous in others. Several elements give a heterogeneous appearance to gneiss: they are heterogranular, ranging from fine to coarse grained, contain several diorite enclaves and are cut by pegmatite intrusions without preferential orientation. Unit Ahue1 is weakly to highly magnetic and shows foliated, folded and banded structures. The gneissic texture is primarily marked by alternating millimetric to centimetric whitish and greyish bands. Banding is locally accentuated by centimetric intrusions of pink granite or granodiorite arranged parallel to foliation planes. It becomes even more important in the vicinity of deformation zones. Fine to medium-grained tonalitic bands are partially to completely recrystallized.

The most common accessory minerals are biotite (10-15%), hornblende (1-5%) and magnetite (trace-3%). Magnetite is most prevalent in gneiss east of Glas Lake. In thin section, biotite appears locally chloritized and contains zircon inclusions. There are also traces of apatite, sphene and allanite. Gneiss typically contains 1 to 20% decimetric to metric enclaves or decametric strips of foliated, locally gneissic, magnetic diorite. Granitic gneiss is mainly located SW of Indien Lake in the Champion Lake area (sheet 32N09). The rock is medium to coarse grained, heterogranular, highly foliated to gneissic, pink both in altered surface and fresh exposure. 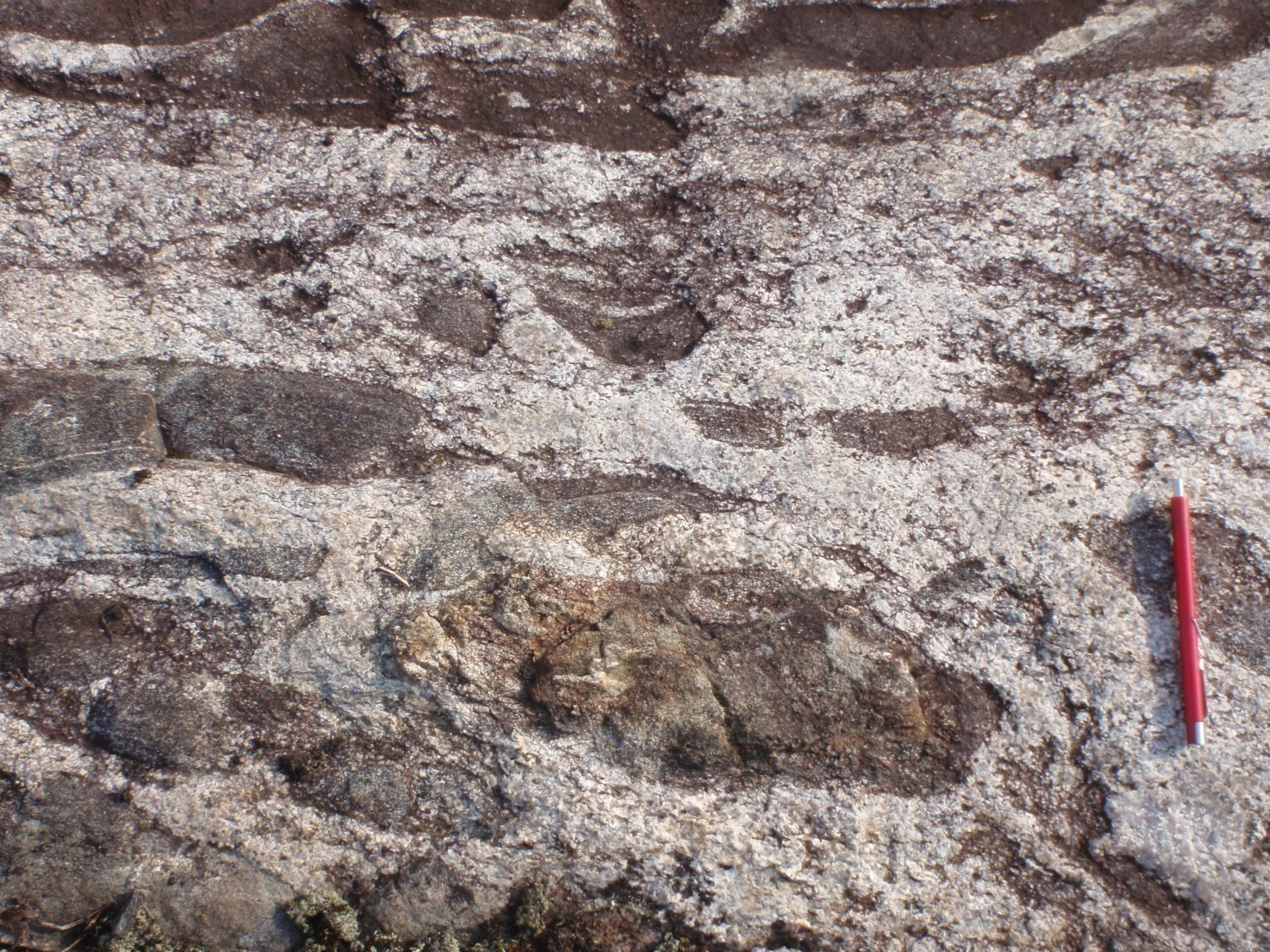 Subunit Ahue1a is observed west and south of Échancrure Lake, on the edge of the Champion Complex. Foliated to gneissic metatexite contains 20 to 50% mobilisate. It is derived from partial melting of a package of tonalitic to dioritic rocks. Migmatized tonalite contains up to 30% of greenish-grey enclaves of foliated and magnetic diorite. The paleosome is highly deformed and magnetic. It is dioritic and rich in mafic minerals (50% hornblende, 10% biotite) that form schlierens. The mobilisate is charnockitic, heterogranular and heterogeneous. It occurs as leucocratic clusters or bands subparallel to foliation planes. In places, the mobilisate is also characterized by the presence of bluish quartz and orthopyroxene. Diorite rafts or enclaves are regularly observed in metatexite. The latter commonly shows an agmatitic texture characterized by the presence of granitic mobilisate that encompasses subangular diorite fragments with sharp or diffuse edges.

Subunit Ahue1b was recognized east of Naquiperdu Lake. It consists of diatexite derived from partial melting of gneissic unit Ahue1. In this subunit, the dioritic paleosome is much more abundant than the tonalitic one. The mobilisate makes up 50 to 90% of diatexite and is similar to the Achp1a subunit metatexite mobilisate. It consists of in situ or segregated leucosome, heterogranular and with hornblende schlierens. It typically contains 10% centimetric mafic fragments rich in hornblende (5-10%) and pyroxene (orthopyroxene and clinopyroxene; 5%). The mobilisate contains up to 30% partially assimilated enclaves and restites that contain up to 40% of hornblende, 10% clinopyroxene and some biotite.

In places, subrounded fragments of foliated diorite or enclaves of banded amphibolite derived from diorite float in the hornblende-rich mobilisate, which defines a rafted texture. The agmatitic texture, which is widespread within subunit Ahue1b, is due to the presence of banded diorite fragments floating in the heterogranular hornblende-rich leucosome. The nebulitic texture, also very common, is characterized by the presence of relics of melted diorite enclaves infiltrated with diffuse leucosome, which are included in the heterogranular mobilisate.

Granodiorite is highly magnetic and medium to coarse grained. Deformation is moderate to severe. Granodiorite is characterized by the presence of hornblende fragments or porphyroclasts (up to 10%) closely associated with biotite, as well as the ubiquitous presence of pyroxene (orthopyroxene and clinopyroxene). Partial melting occurs in places where the neosome resembles subunit Ahue1b diatexite. Migmatite is distinguished by the presence of numerous amphibole-rich enclaves assimilated by granodiorite, likely representing restites from partial melting of diorite or amphibolite of unknown origin. The granodioritic mobilisate shows hornblende-biotite-magnetite schlierens aligned with foliation. It is also characterized by the ubiquitous presence of orthopyroxene in highly variable proportions (1-5%).

This subunit consists of homogeneous medium-grained granodiorite, weakly to strongly foliated. Petrographic and geochemical analyses show that, locally, subunit Ahue2a consists of tonalite. However, with the naked eye, these two rocks are very similar. The rock is light grey, locally pinkish in altered surface. It generally contains 10% biotite, 2-10% hornblende and 1-2% magnetite. The most foliated rocks are also richer in mafic minerals (hornblende and biotite) with contents of up to 20%. Subunit Ahue2a contains up to 10% centimetric to metric enclaves of amphibolite and quartz diorite, which contain up to 50% of hornblende.

Granite is medium to coarse grained, locally pegmatitic. It is slightly to moderately magnetic. It is medium light pink in fresh exposure and whitish pink in altered surface. The rock is foliated to locally gneissic. It is homogeneous and contains 3-10% biotite and 1-3% magnetite.

A sample from unit Ahue1 (outcrop 17-DT-5144) yielded an age of 2833 ±11 Ma. This age supports the interpretation that the Hutte Complex gneissic unit (Ahue1) is a Mesoarchean basement on which supracrustal rock units such as the Lac des Montagnes Group, Voirdye Formation and Rupert Complex have been deposited.

Although no outcrop was found to observe the contact between the Hutte Complex and supracrustal rocks, the age of the unit (David, 2018) and the piling of volcano-sedimentary units suggest that the Hutte Complex forms the basement on which the Lac des Montagnes Group, Rupert Complex and Voirdye Formation were deposited. In addition, subhorizontal foliation observed in the Hutte Complex supports the interpretation that these are domes exposed in windows in the axial part of anticlines. The Hutte Complex is cut by Proterozoic diabase dykes belonging to the Mistassini and, more locally, Senneterre dyke swarms.