The Préville Suite was introduced in the Jeannin Lake area (Charette et al., 2016). Penrose (1978) had previously described layered basic hornblende-tremolite gneiss in part of the area currently covered by the Préville Suite.

The Préville Suite includes various facies of deformed and metamorphosed calcosilicate rocks. Two informal units, generally interstratified, were distinguished: biotite-amphibole-garnet carbonate gneiss of possible sedimentary origin (pPprv1), and amphibole porphyroblastic mafic calcosilicate rocks of uncertain origin (pPprv2). Unit pPprv2 is the main unit of the suite. Rocks of both units are well foliated and locally schistose. In the vicinity of faults and the contact with the Labrador Trough, grain size is reduced and chlorite is abundant. Moreover, amphibole and garnet porphyroclasts associated with muscovite pressure shadows (replacing biotite) are observed. 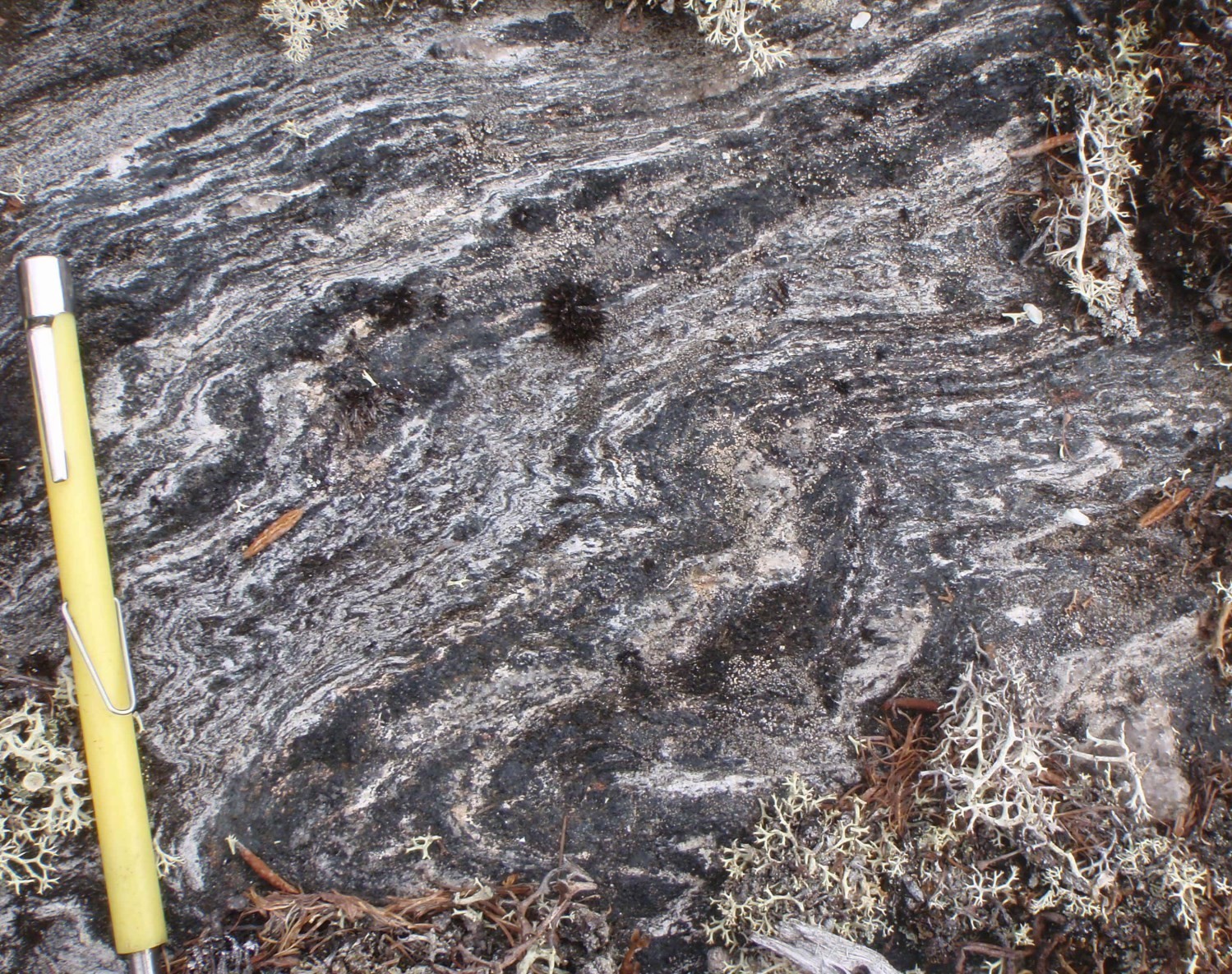 The main unit of the Préville Suite is characterized by the presence of 1-10 cm-long porphyroblasts of acicular amphibole (hornblende, actinolite ± pargasite ± arfvedsonite). Sheaves grow in the foliation plane, defining a remarkable garbenschiefer texture. Amphiboles are usually poikiloblastic with many inclusions of plagioclase and, more locally, carbonate, epidote and chlorite. Unit pPprv2 consists of two main facies that alternate on the decimetric to decametric scale. In the first facies, porphyroblasts are surrounded by a very fine-grained whitish matrix composed of plagioclase and carbonate associated with a significant amount of zoisite in the matrix and as inclusions in amphiboles. The second facies shows centimetric to decimetric banding marked by alternating bands very rich in amphibole-garnet, and amphibole-garnet-biotite lenticular bands. These bands contain 5-40% very fine-grained recrystallized matrix composed of plagioclase, carbonate, small brown biotite felts accompanied locally by quartz and opaque minerals. Secondary minerals such as kyanite, sillimanite, staurolite, muscovite and scapolite are observed in varying amounts in this facies. Epidote, tourmaline, zircon (as inclusions in biotite), sphene and apatite are the main accessory minerals.

Schists included in the pPprv2 unit are dark green and fine to medium grained. They are composed of actinolite, plagioclase, chlorite, carbonates and biotite. Penrose (1978) also mentions the presence of medium to coarse-grained white to light grey tremolite marble beds. This marble could correspond to the first facies described in the pPprv2 unit.

The Préville Suite forms a sequence ~30 km long by 10 km wide in the western portion of the Jeannin Lake area, more specifically in  sheets 24B11 and 24B12. It covers and area of close to 144 km2 in the Rachel-Laporte Lithotectonic Domain.

Penrose (1978) and Dressler (1979) state that mafic gneiss could represent clastic sediments interstratified with mafic lava and ash flows in an underwater environment. In the Déborah Lake area, Girard (1995) describes calcosilicate rocks that also have a garbenschiefer texture (coarse amphibole sheaves in a fine-grained matrix) similar to that observed in unit pPprv2. In this area, these rocks have been assigned to a calcosilicate rock subunit of the Klein Suite (pPkle1c).

The characteristic composition and lithogeochemistry of these rocks justify the decision at this time to distinguish the Préville Suite as a particular stratigraphic unit. However, it is not possible to exclude the possibility of an association with the other Laporte Supersuite units (Lafrance and Vanier, 2021), namely the Freneuse and Klein suites.