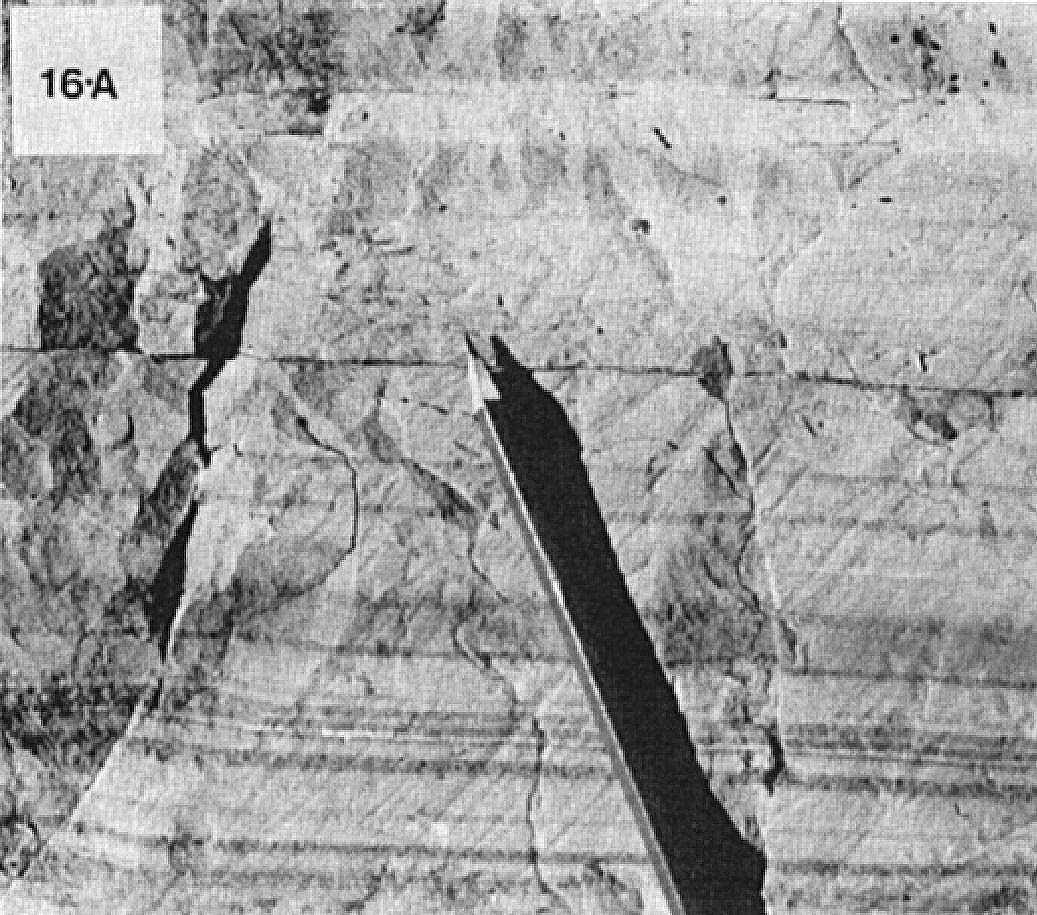 The Dolly Formation is the sedimentary unit forming the upper part of the Attikamagen Group, as defined by Clark and Wares (2004). Dimroth (1971, 1972, 1978) divided the formation into two members: a lower member consisting of black and grey mudstone, and an upper member consisting of siltstone, sandstone and red and green mudstone. According to Dimroth (1971, 1972, 1978), the lower member of the Dolly Formation is present only in the Squaw and Knob Lake areas and is interbedded with or overlies the underlying Denault Formation. The lower member is well exposed near the railway south of Schefferville. It consists of laminated black and grey mudstone with interbedded (10-30 cm) medium to coarse-grained grauwacke and sandstone. Mudstone commonly exhibits tabular stratification and vortical structures (Dimroth, 1972, 1978). Interstratified finely bedded intraclastic dolomite (up to 6 m thick) are characteristic. Thinly, interstratified black chert is observed higher in the sequence (Harrison et al., 1972; Dimroth, 1972, 1978). According to Harrison et al. (1972), dolomite present at the base of the Dolly Formation is similar to that of the underlying Denault Formation. The rocks of the lower member were deposited in a relatively deep marine environment and are thought to represent in part the lateral equivalent of the Denault Formation (Dimroth, 1971, 1978). 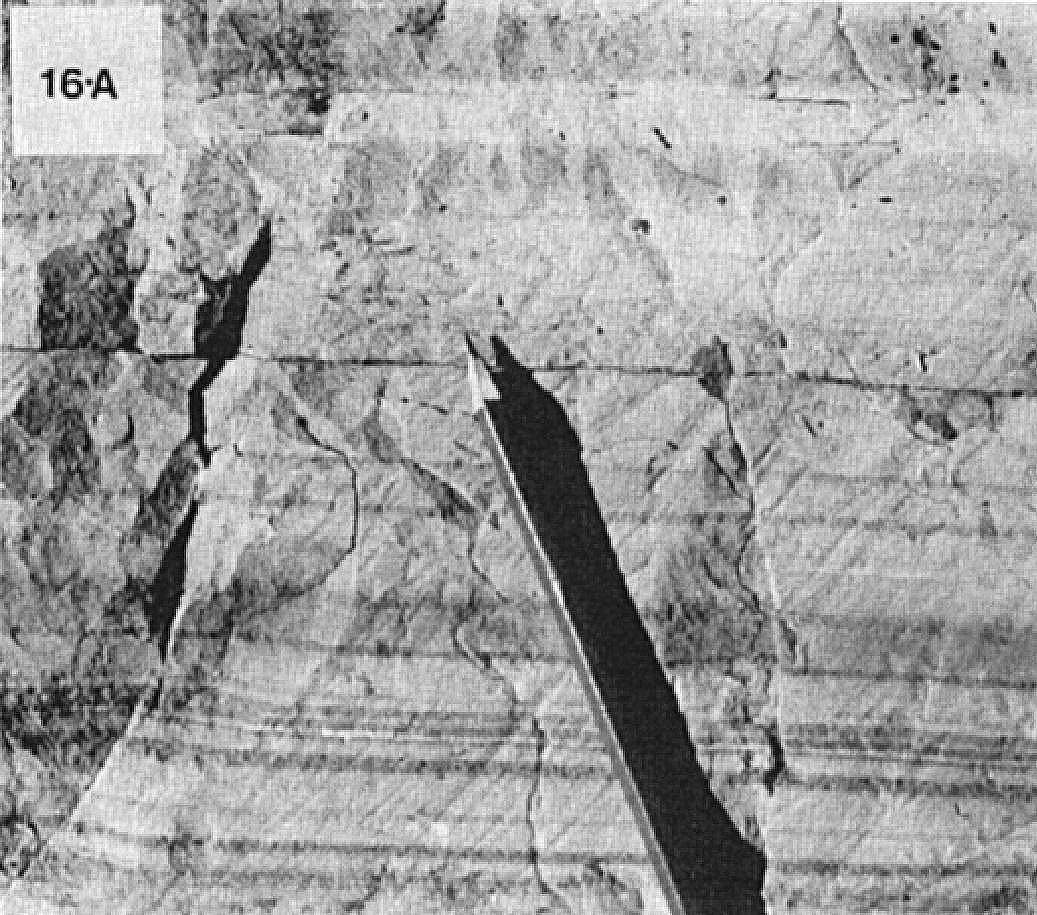 The upper member of the Dolly Formation occurs in the area east of Schefferville. In the area east of Dolly Lake, where it is very well exposed, this member consists of well-stratified and finely bedded red and green fine-grained sandstone and siltstone. These rocks commonly display crossbedding and tabular stratification. Towards the NE, the upper member changes to red and green siltstone and mudstone with tabular stratification. These rocks are well exposed at the NW end of Attikamagen Lake (Dimroth, 1971, 1972, 1978). Dimroth (1971, 1978) indicates that the upper member changes rapidly to grey mudstone with interbedded sandstone towards the east and SE. The upper member of the Dolly Formation is similar to the Le Fer Formation (Swampy Bay Group), which underlies the Denault Formation, and reflects a prograde deltaic deposit that accumulated in a west-to-east basin (Dimroth, 1971, 1978). SE of the Schefferville area, rocks of the upper member change to mudstone and grey siltstone locally having turbidite characteristics. These rocks were deposited towards the central part of the basin in deeper water (Dimroth, 1971, 1978; Wardle, 1979a, b; Wardle and Bailey, 1981).

Sedimentary rocks of the Dolly Formation were deposited in a shallow marine basin developed on the carbonate platform of reef stromatolitic dolomite of the Denault Formation (Dimroth, 1972, 1978; Wardle and Bailey, 1981; Hoffman and Grotzinger, 1989; Birkett, 1991). Rocks of the formation are slightly metamorphosed and at most reach the greenschist facies (Dimroth and Dressler, 1978). From an economic point of view, phosphate-rich sedimentary rocks (phosphatic cherty mudstone) were reported by Harrison et al. (1972) and Birkett (1991) in the Dolly Formation (Clark et al., 2008).

The Dolly Formation belongs to the allochthonous Schefferville Lithotectonic Zone as defined by Clark and Wares (2004). It has only been identified in the western part of the Labrador Trough, south of latitude 55°15′N (Dimroth et al., 1970; Dimroth, 1971, 1972, 1978; Wardle, 1979b). In Quebec, the distribution of this formation is limited, forming two parallel strips, oriented NW-SE, extending ~35 km and 13 km NE of Schefferville, respectively. On the Labrador side, the Dolly Formation occupies much of the Petitsikapau Lake basin (sheet 23J09) and extends SE to latitude 54°N (Wardle, 1979b, 1982; Wardle and Bailey, 1981). West of Schefferville, a grey mudstone and siltstone unit has been identified east of Stakit Lake (sheet 23J10) (Wardle, 1979b).

According to Harrison et al. (1972), the Dolly Formation is very thin near the western edge of the Trough (west of Knob Lake) and thickens considerably towards the NE. The minimum thickness of the formation is estimated between 2 m and 4 m at the crest of Knob Lake (Clark et al., 2008). NE of Dolly Lake (type locality), Harrison et al. (1972) estimated the thickness of the formation at >300 m. In the same area, Dimroth (1971) reported a thickness of 230 m at Dolly Ridge, NE of Schefferville. On the Labrador side, the Dolly Formation is ~180 m thick east of Stakit Lake, gradually increasing eastward to ~500 m in the Petitsikapau Lake basin (Wardle, 1979b). To the SE, the Dolly Formation thickens eastward to a maximum thickness of 1000 m to 2500 m (Wardle, 1979a).

Rocks of the Dolly Formation, Paleoproterozoic in age, were deposited towards the end of the first Labrador Trough sedimentation cycle at ~2142 +4/-2 Ma (T. Krogh and B. Dressler, unpublished data cited in Clark, 1984, page 4). However, these rocks may be much younger, as they were deposited towards the end of the Attikamagen Group sedimentation period estimated to be between 2.06 Ga and 1878-1880 Ma (Chevé and Machado, 1988; Findlay et al., 1995; Melezhik et al., 1997).

WARDLE, R.J. 1979a. Geology of the eastern margin of the Labrador Trough. Department of Mines and Energy, Government of Newfoundland and Labrador; Report 78-9, 22 pages. https://gis.geosurv.gov.nl.ca/geofilePDFS/WBox040/LAB_0415.pdf