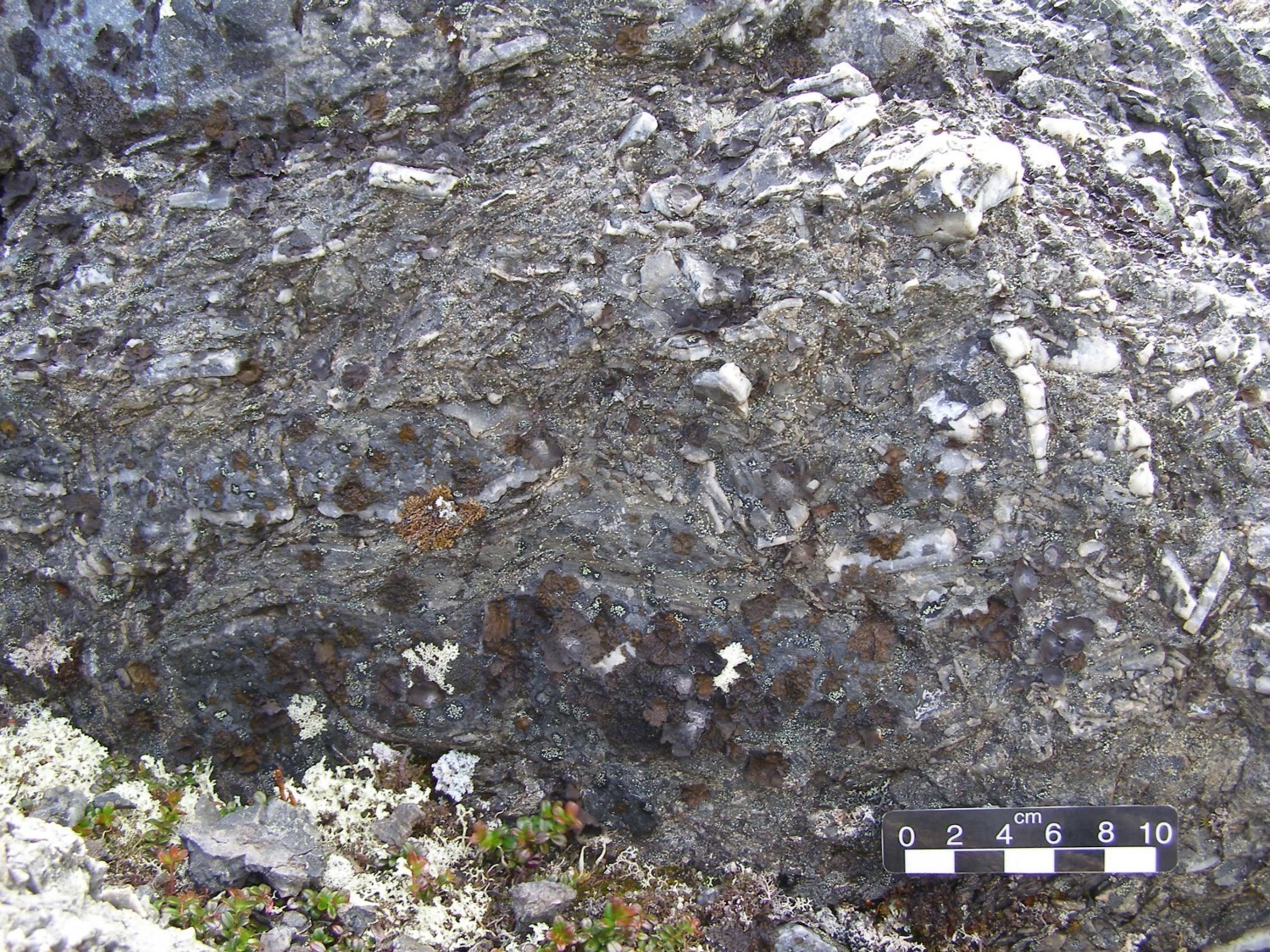 Geologists from Labrador Mining and Exploration (1949, see Frarey and Duffell, 1964) called a cherty breccia unit located in the Schefferville area the « Fleming chert breccia ». These authors placed this unit stratigraphically above the Denault dolomite and below the Wishart quartzite (see Frarey and Duffell, 1964). The name Fleming Formation was formalized by Harrison (1952) in his description of the geology of a NE-SW oriented strip at Schefferville (« Burnt Creek strip« ). It should be noted that the name Fleming does not refer to a particular geographical entity, but its use is well established in the literature and justifies its retention. Baragar (1967) subsequently described this unit between Helluva Lake and Le Fer Lake, but did not distinguish it on his map. Dimroth (1978) mapped the Fleming Formation from the Helluva and Le Fer lakes area to Knob Lake, south of Schefferville. He also included the Fleming Formation in the Attikamagen Subgroup, later reclassified as the Attikamagen Group by Clark and Wares (2004). 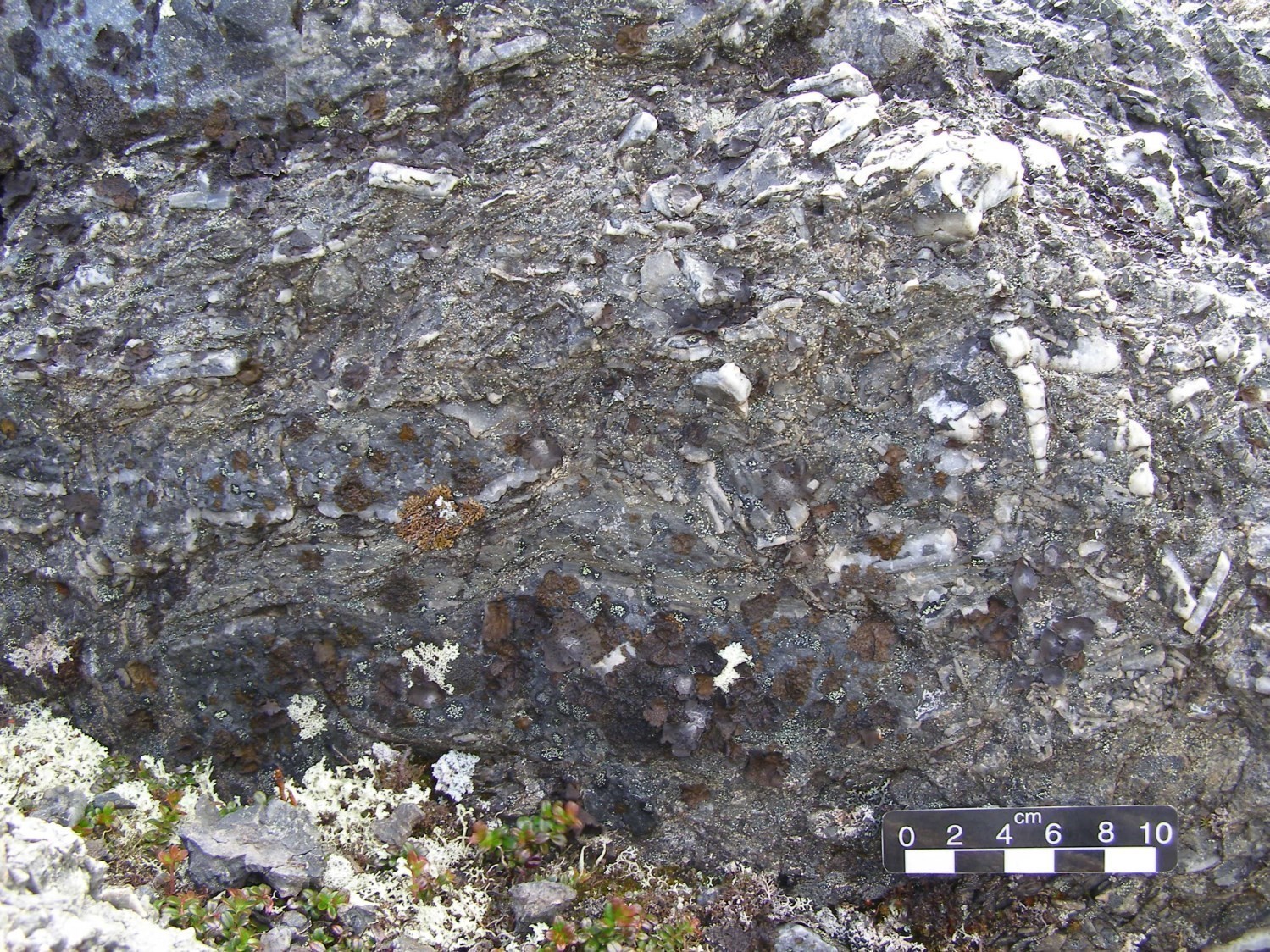 The Fleming Formation is a sedimentary unit belonging to the upper part of the Attikamagen Group. It represents the western equivalent of the Dolly Formation. It consists essentially of chert breccia containing milky white chert fragments hosted in a siltstone or sandstone matrix. The different lithologies that make up the formation are presented in Table 1.The colour of the rocks varies from milky white to grey, pink, brown, red or green (Harrison, 1952; Harrison et al., 1972). Chert breccia, which forms over 90% of the formation, is a homogeneous rock with little structure. However, there is evidence of stratification locally (Dimroth, 1971, 1978; Zajac, 1974).

The base of the Fleming Formation generally comprises a 0.6 m to 3 m thick greenish grey argillaceous siltstone layer (Baragar, 1967; Dimroth, 1971, 1972, 1978). The latter is massive, locally laminated, and commonly contains chert lenses and veinlets. Argillaceous siltstone is overlain by chert breccia arbitrarily divided into two or three randomly interdigitating zones. The lower part of the Fleming Formation generally contains fragments of irregularly contorted laminated chert, laminated brecciated chert, chert breccia and siltstone in an argillaceous siltstone matrix. In the Le Fer Lake area, this part consists locally of massive or residual light grey chert probably derived from the replacement of laminated or intraclastic dolomite (Dimroth, 1971). The upper part of the formation comprises fragments of chert breccia, sandstone and cemented chert breccia in a medium to coarse-grained sandstone matrix. Siltstone is generally absent. At the top, the rocks locally possess dolomitic cement (Dimroth, 1971, 1972, 1978). Based on observations by Clark et al. (2008), the Fleming Formation contains in its upper part lenses and layers of quartzitic sandstone similar to that of the Wishart Formation. 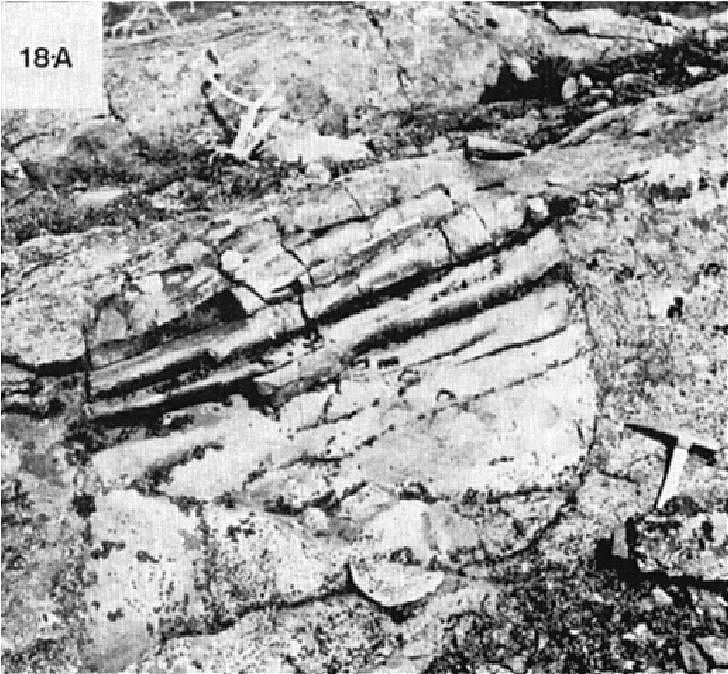 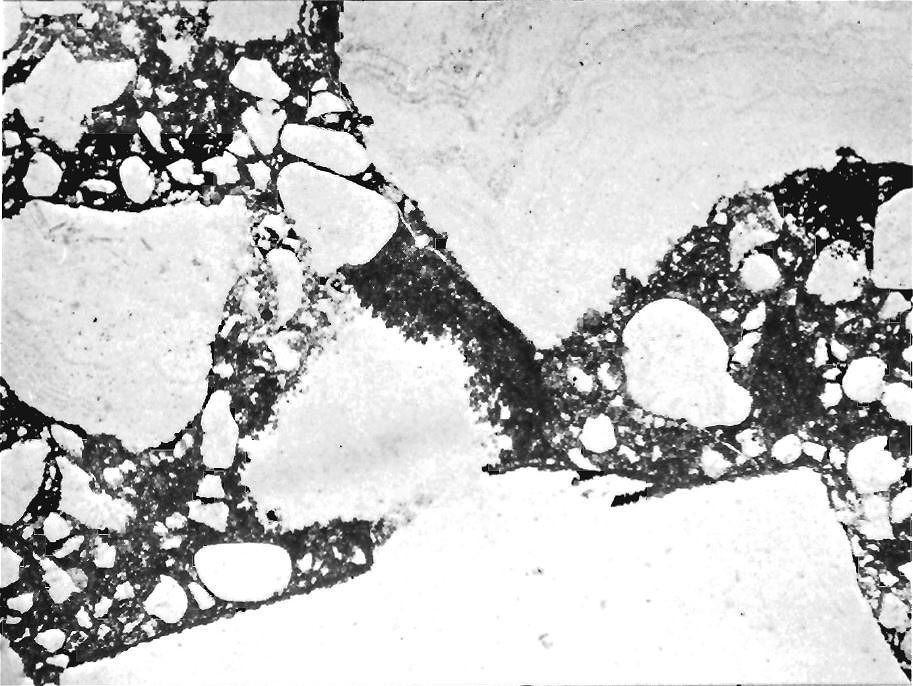 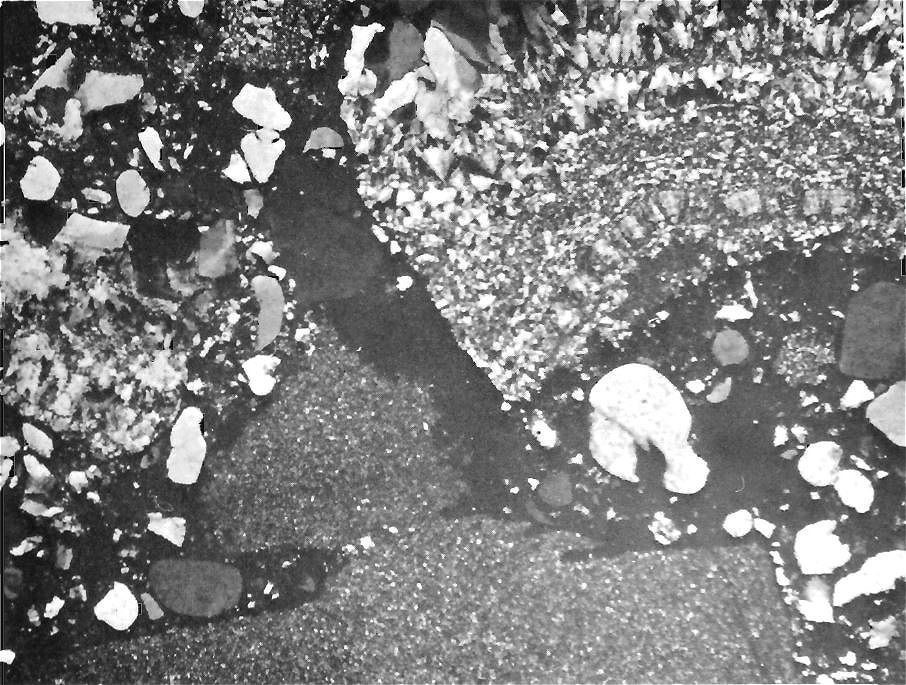 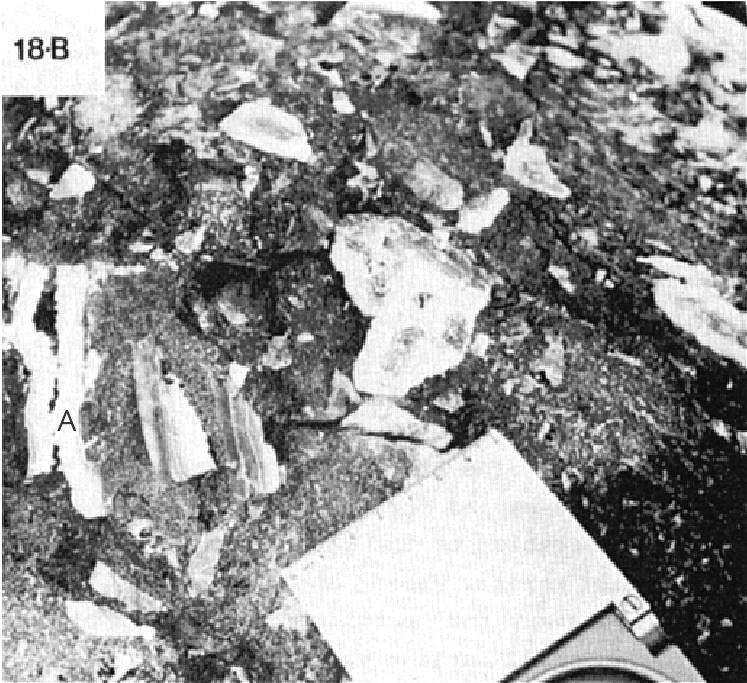 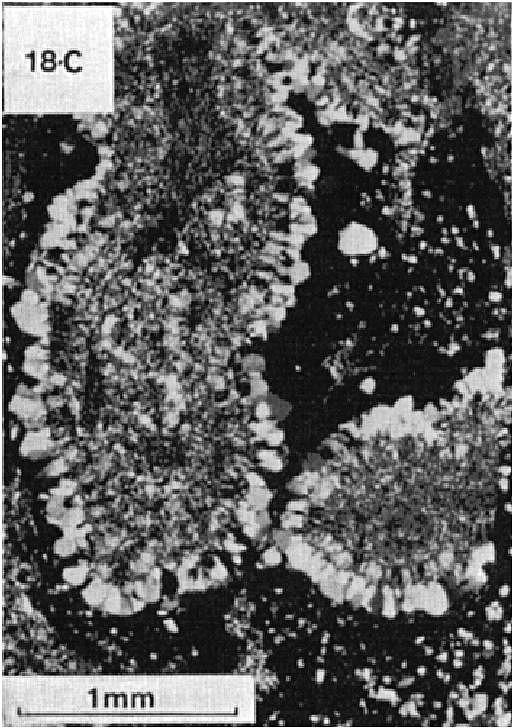 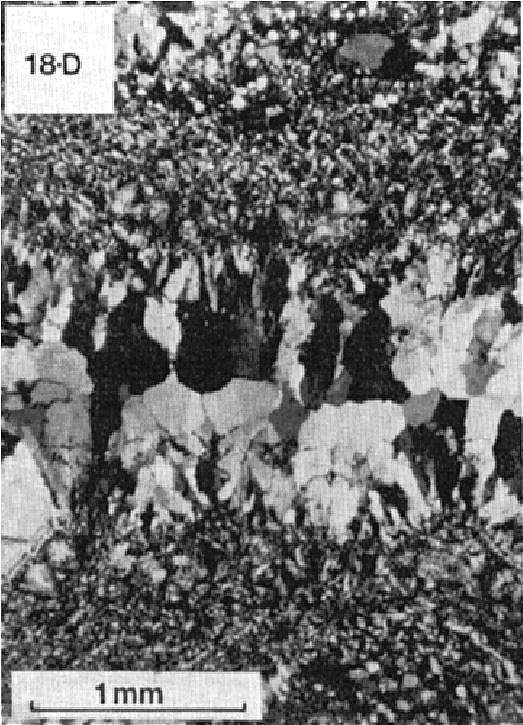 Fragments consist of massive, homogeneous microcrystalline chert, banded chert or quartz. Blocks of sandstone or quartz arenite (<30 cm) locally containing chert pebbles are also observed (Clark et al., 2008). Some of these blocks display relics of stratification with beds 5-10 cm thick (Dimroth, 1971 and 1978). Chert fragments are grey to milky white and range in size from pebbles to blocks (1-60 cm). Most are angular, but some are rounded (Dimroth, 1971; Zajac, 1974; Clark et al., 2008). Tabular fragments are observed in places (Baragar, 1967; Dimroth, 1971). Many chert clasts are derived from chalcedony cavity filling. Fragments from veinlet filling are also common (Dimroth, 1971, 1972, 1978). The rocks of the Fleming Formation are slightly metamorphosed to the greenschist facies (Fraser et al., 1978).

Rocks of the Fleming Formation were deposited at the bottom of a slope bordering a basin near the western margin of the Labrador Trough (Dimroth, 1971, 1978; Wardle and Bailey, 1981). The origin of chert breccia has been studied by several authors (Harrison, 1952; Dufresne, 1952; Howell, 1954; Baragar, 1967; Gross, 1968; Dimroth, 1971). According to Dimroth (1978), the Fleming Formation is derived from a stratified sequence of sandstone, siltstone, dolomite and gypsum, which was silicified and brecciated. Brecciation is thought to be the result of collapse by dissolution of evaporites and sliding. Birkett (1991) interprets chert breccia as a siliceous sediment formed in shallow water and associated with evaporites. This sediment would have undergone desiccation and synsedimentary slip (Clark et al., 2008).

The rocks of the Fleming Formation were deposited towards the end of the first volcano-sedimentary cycle of the Labrador Trough, around 2142 +4/-2 Ma (T. Krogh and B. Dressler, unpublished data cited in Clark, 1984, page 4). However, they may be much younger as they were deposited towards the end of the sedimentation period of the Attikamagen Group, estimated to be between 2.06 Ga and 1878-1880 Ma (Chevé and Machado, 1988; Findlay et al., 1995; Melezhik et al., 1997). According to the interpretation of Wardle and Bailey (1981), the Fleming Formation is slightly younger than the Dolly Formation.

WARDLE, R.J. 1979.The western Margin of the Labrador Trough. Department of Mines and Energy, Government of Newfoundland and Labrador; Report 79-1, 7 pages. https://www.gov.nl.ca/nr/files/mines-geoscience-publications-reportactivities-1979-wardle2-roa1979.pdf