The Terriault Complex was defined in the Brisson Lake area (Lafrance et al., 2016) and consists of a very complex package of several lithologies of different composition and age.

The Terriault Complex is dominated by felsic intrusive rocks containing 5-25% centimetric to metric enclaves of deformed rocks. This complex is associated with a strong positive aeromagnetic anomaly characterized by disturbances and wrinkles, suggesting unit drag along divergent fault systems bordering the unit. Despite the strong magnetic anomaly associated with the Terriault Complex, only the few felsic gneiss enclaves are magnetic. Intermediate to felsic intrusive phases, as well as mafic to intermediate enclaves, are generally not very magnetic.

The Terriault Complex also contains injections of medium-grained to pegmatitic pink granite poor in ferromagnesian minerals. These injections form between 5% and 30% of outcrops and occur as clusters, dykes or subconformable millimetric to decimetric bands. The high proportions of enclaves and injections give outcrops of the Terriault Complex a very heterogeneous appearance, although each phase in itself is relatively homogeneous. 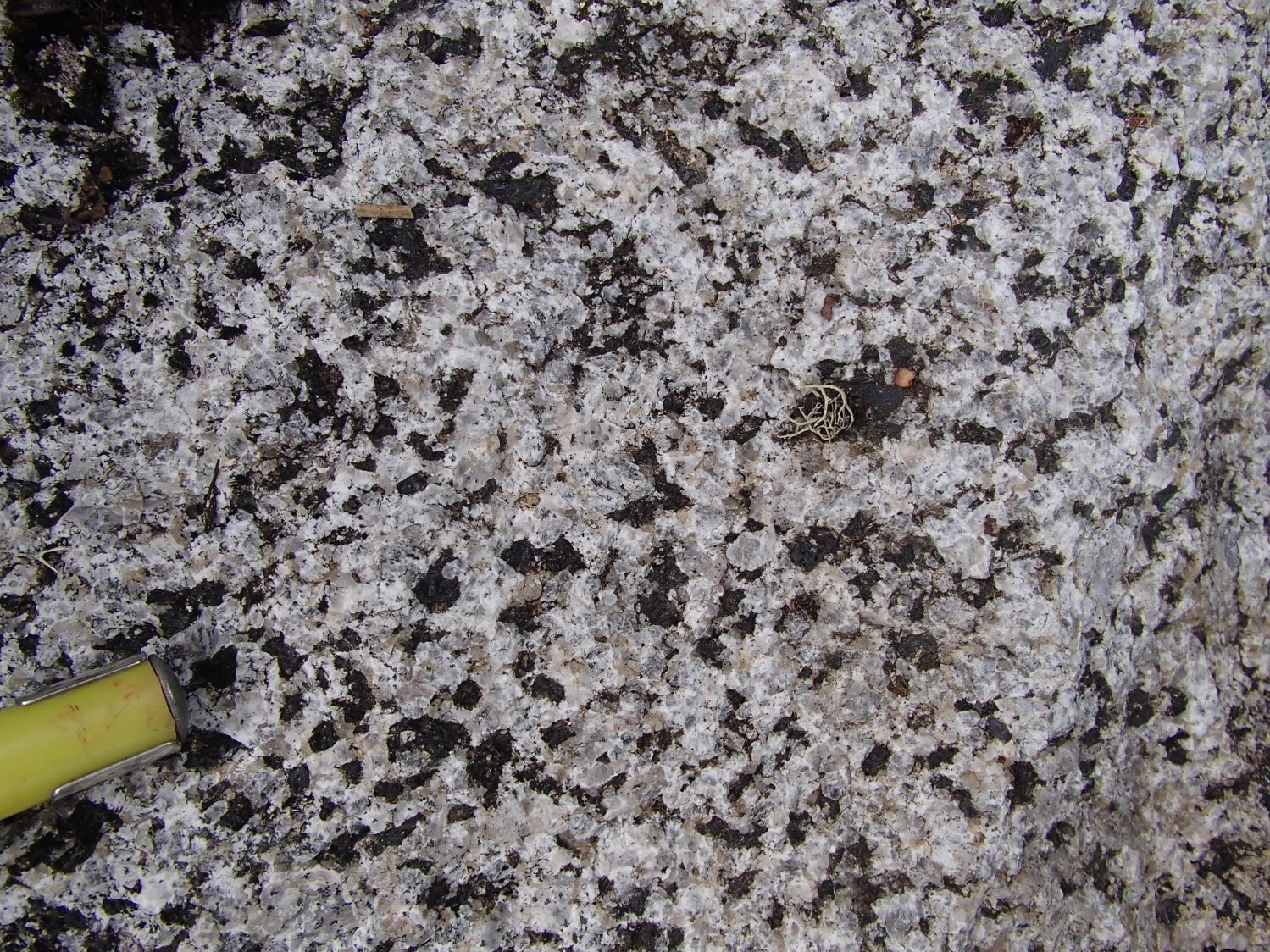 The average intrusive rock composition of unit ApPter1 is at the boundary between granodiorite and tonalite. Locally, there is quartz monzodiorite and monzogranite. These rocks are grey with a pinkish or purplish shade, massive to slightly foliated, medium grained and even grained. They contain <20 to 30% slightly dark purplish-grey quartz, 10 to 20% ferromagnesian minerals and 2 to 15% locally coarse K-feldspar crystals (≤1 cm) distributed irregularly. Ferromagnesian minerals occur as millimetric phenocrystals of green hornblende, as well as millimetric to centimetric clusters of hornblende and brown biotite. These clusters are locally magnetic and also contain accessory minerals, including epidote, apatite, opaque minerals and allanite with, in places, sphene, zircon and muscovite. In thin sections, these rocks display magmatic or partial recrystallization textures, particularly for quartz, which forms subgrains with undulatory extinction around feldspar crystals. 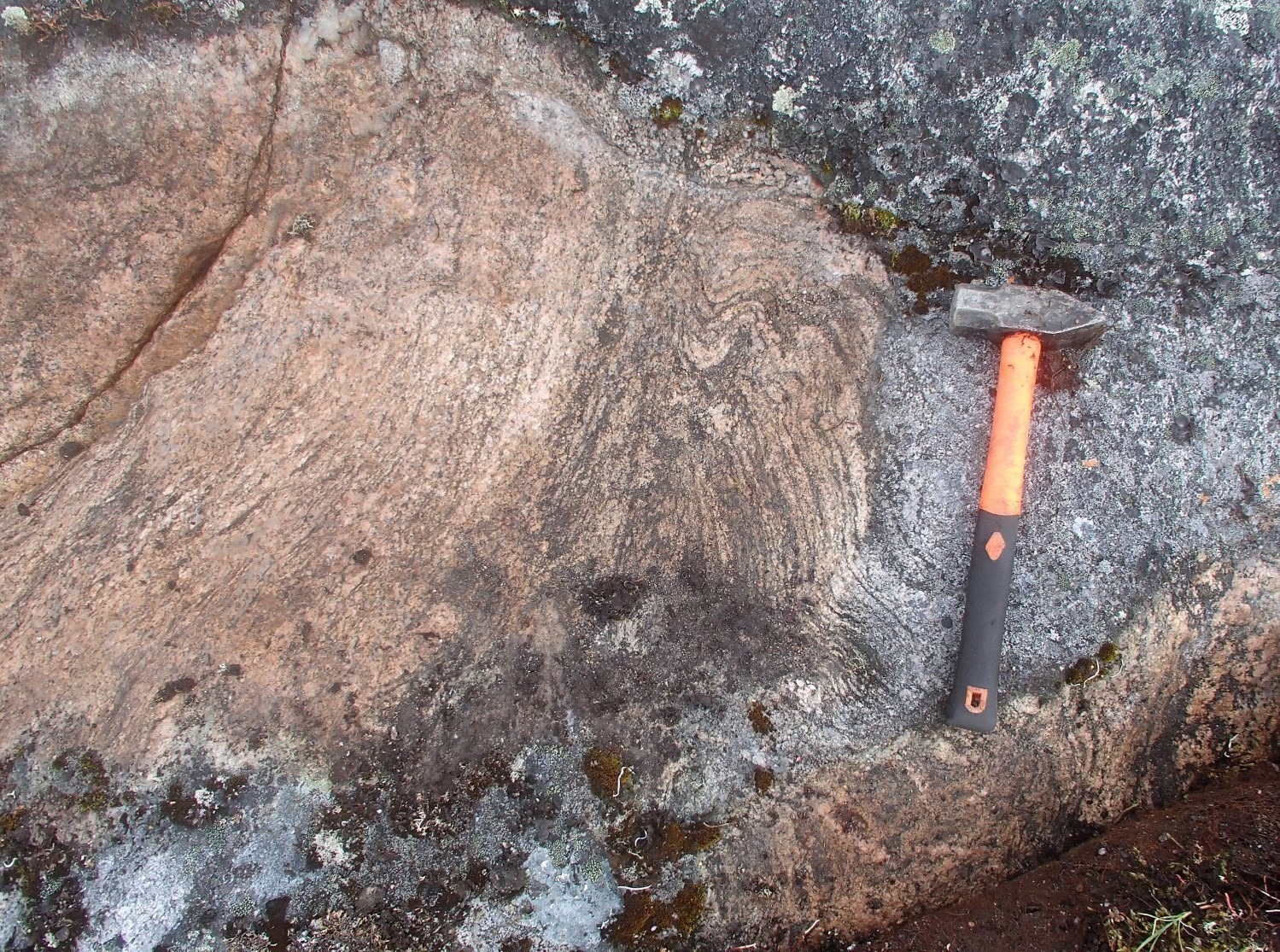 Enclaves consist of diorite, quartz diorite, leucogabbro, tonalite and monzodiorite. They are well foliated, fine to medium grained, granoblastic, and commonly gneissic and banded. The proportions of quartz (2-18%) and ferromagnesian minerals (10-30%) vary by rock types and K-feldspar is sparse. Ferromagnesian minerals consist of green hornblende associated with small amounts of chloritized biotite. Plagioclase is slightly sericitized. Epidote, opaque minerals, apatite and allanite are observed as accessory phases. In the central part of the complex, mafic rock enclaves are more abundant (~40%). There is also an outcrop consisting entirely of foliated leucogabbro and another of completely recrystallized fine-grained anorthosite. 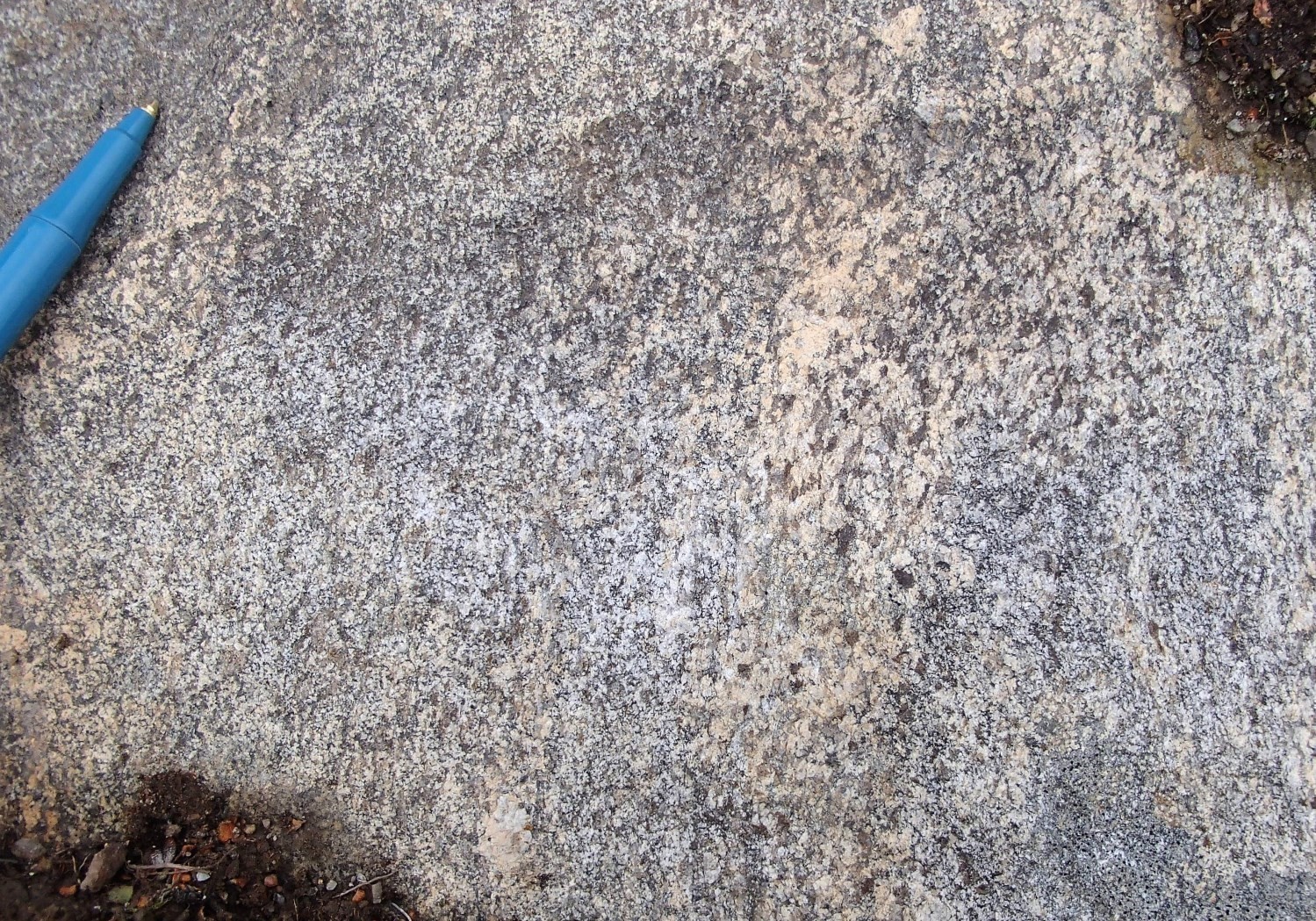 In the SE part of the Terriault Complex, intrusive rocks contain orthopyroxene and have been assigned to unit ApPter2. These outcrops have a more homogeneous appearance and consist of foliated medium- grained greenish grey enderbite (orthopyroxene tonalite). The rock contains 15 to 20% quartz, <5% K-feldspar and 10 to 15% green hornblende crystals, red to brown biotite flakes and orthopyroxene. Ferromagnesian minerals form millimetric clusters to which accessory minerals are associated, essentially apatite and zircon. Enderbite contains a brown sugar-coloured intrusive phase of the same composition, but coarser-grained, that forms clusters or centimetric bands in the rock.

Although this complex has not been the subject of any geothermobarometric studies, the presence of enderbite in the Terriault Complex indicates high metamorphic conditions corresponding to the upper amphibolite to granulite facies. Also, the presence of euhedral hornblende, smoky quartz, purplish plagioclase, as well as serpentinized and amphibolized orthopyroxene (SE portion of the complex) suggest an emplacement under high P-T conditions and amphibolite facies metamorphism during the regional Paleoproterozoic event.

The Terriault Complex is located in the NE part of the Mistinibi-Raude Lithotectonic Domain (Charette et al., 2019), within a diatexite mass belonging to the Mistinibi Complex, all of which is trapped between the Rivière George Shear Zone to the west and the Moonbase Shear Zone to the east. Unit ApPter1 unit (141 km2) forms a main mass approximately 16 km by 12 km. On the SE side of the complex, unit ApPter12 is approximately 5 km by 7 km (27 km2). Four other small intrusions <1 km wide by 3 km to 5 km long are also present on the periphery of the main intrusion.

The presence of diatexite and paragneiss layers and masses of the Mistinibi Complex (pPmis) has often been noted on outcrops of the Terriault Complex. However, genetic and chronological relationships between these two units are still uncertain.