The unit was first named “Lac Jannière Metasediments” by Taner (1992) in the Juillet Lake area in reference to Janières Lake in sheet 23I16. However, this term was not used by Hammouche et al. (2012) when mapping the Zeni Lake area, which includes the area mapped by Taner. Hammouche et al. (2012) preferred to use the lithological terms I1Db and M1p to describe this unit. As part of the Southeastern Churchill Province (SECP) regional synthesis (Lafrance et al., 2018), this unit was renamed “Jannière Complex” by Charette et al. (2019) due to the assemblage of rocks of different natures. 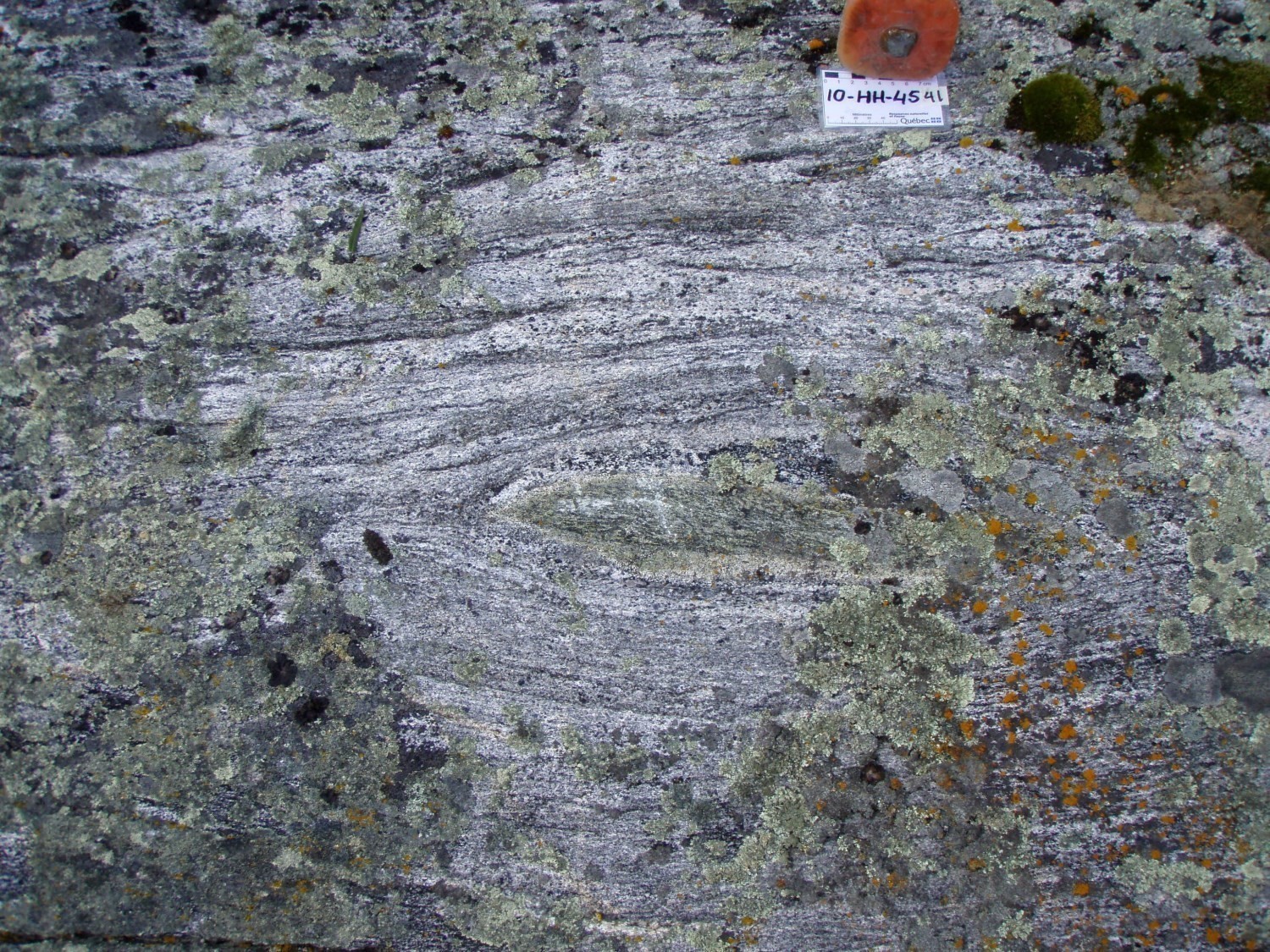 Foliated tonalite and granite form metric to decametric fine to very fine-grained porphyroclastic intrusions. K-feldspar porphyroclasts (0.1-2 mm) account for 5-10% of the rock. These felsic intrusions contain biotite (10-20%) and very fine muscovite (5%). Accessory minerals are sphene, hematite, carbonate and zircon. Feldspar is highly sericitized, while biotite and hornblende are partially chloritized. There is also epidote in submillimetric fractures. Near the Zeni Complex (ApPzen1) in the north, these intrusive rocks are highly deformed to mylonitized, visibly affected by the Zeni Shear Zone. 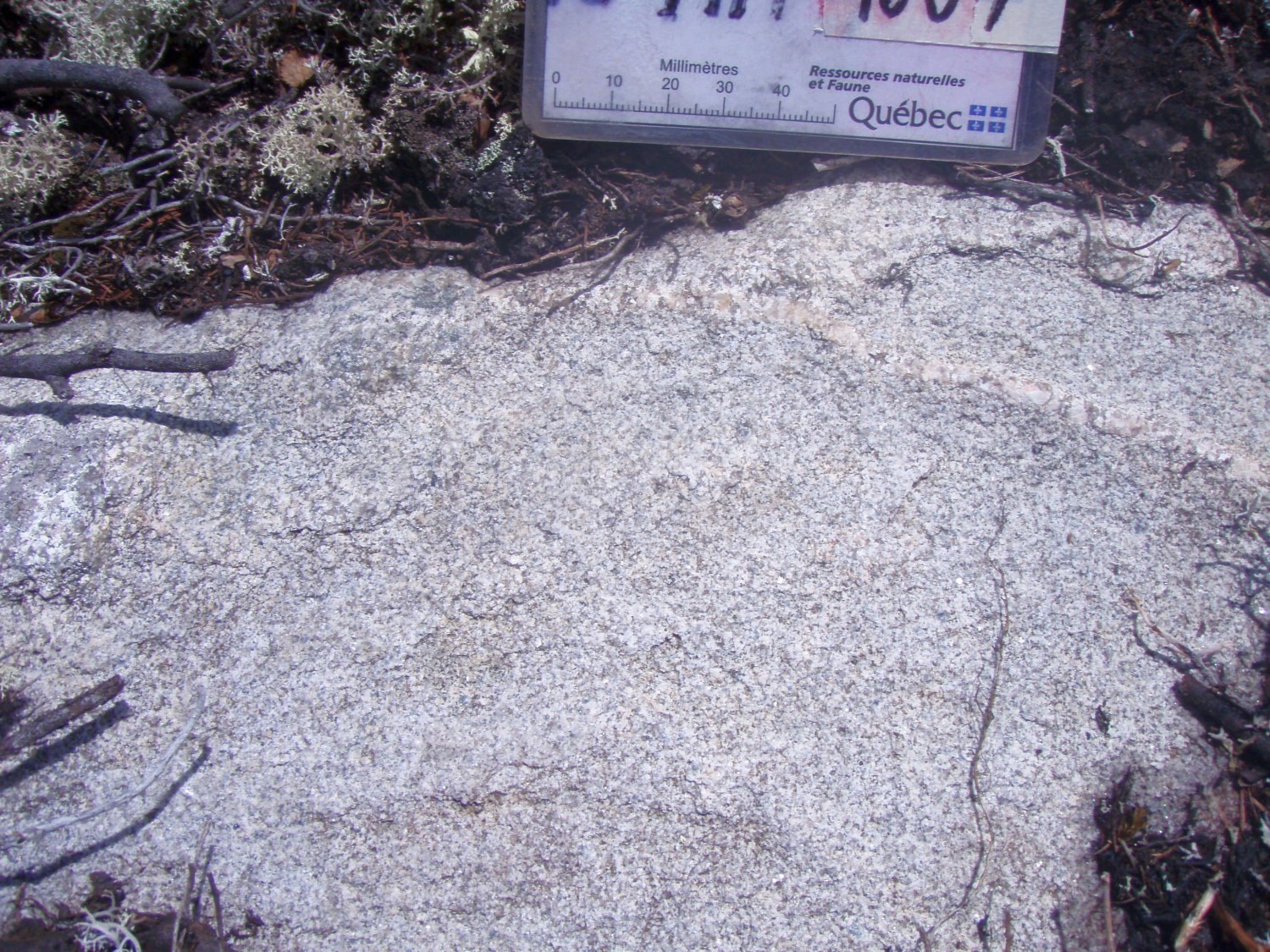 Unit ApPjai2 consists mainly of leucocratic tonalite, locally migmatized, and sparse foliated granite and granodiorite. Tonalite is fine to medium grained. It contains mainly biotite (5-15%) with some hornblende, magnetite (1-3%) and hematite. In migmatized portions, the mobilisate is composed of quartz, plagioclase and some biotite. Tonalite is in places highly deformed to mylonitized. In this case, it is characterized by the flattening of quartz crystals and millimetric to centimetric quartz bands. Lenticular enclaves of fine to medium-grained dark green amphibolite (≤1%) were observed locally in tonalite.

Granite and granodiorite vary from fine to coarse grained. K-feldspar occurs locally as 1 to 2 cm porphyroclasts and can make up 20% of the rock. Biotite, muscovite, sphene, apatite and some epidote were observed.

Taner (1992) reports metasedimentary rocks north of Jannière Lake in the ApPjai2 unit area. It is therefore possible that this unit may also include some metasedimentary rocks. The latter show alternating millimetric to centimetric leucocratic bands (meta-arkose) and biotite-rich mesocratic bands. The rock is fine-grained, brownish light grey in patina and beige grey in fresh exposure. It is composed of biotite, sillimanite, andalusite, garnet, muscovite and chlorite.

The Jannière Complex is located in the southern part of the Mistinibi-Raude Lithotectonic Domain. It continues eastward in Labrador. Units ApPjai1 and ApPjai2 cover areas of 176 km2 and 207 km2 respectively.

No dating was done in the Jannière Complex. However, the presence of enclaves of this unit in the La Pinaudière Granite indicates that it is older than 2571 Ma.