Originally, Taner (1992) introduced this unit as the “Lac La Pinaudière Intrusive Complex” by grouping biotite-hornblende granitic to tonalitic rocks, as well as a less common hornblende quartz diorite phase. Since this unit consists only of intrusive rocks, Hammouche et al. (2012) have redefined it as a lithodeme, the La Pinaudière Granite. In addition, tonalitic and dioritic rocks were not observed during their mapping in the summer of 2011. 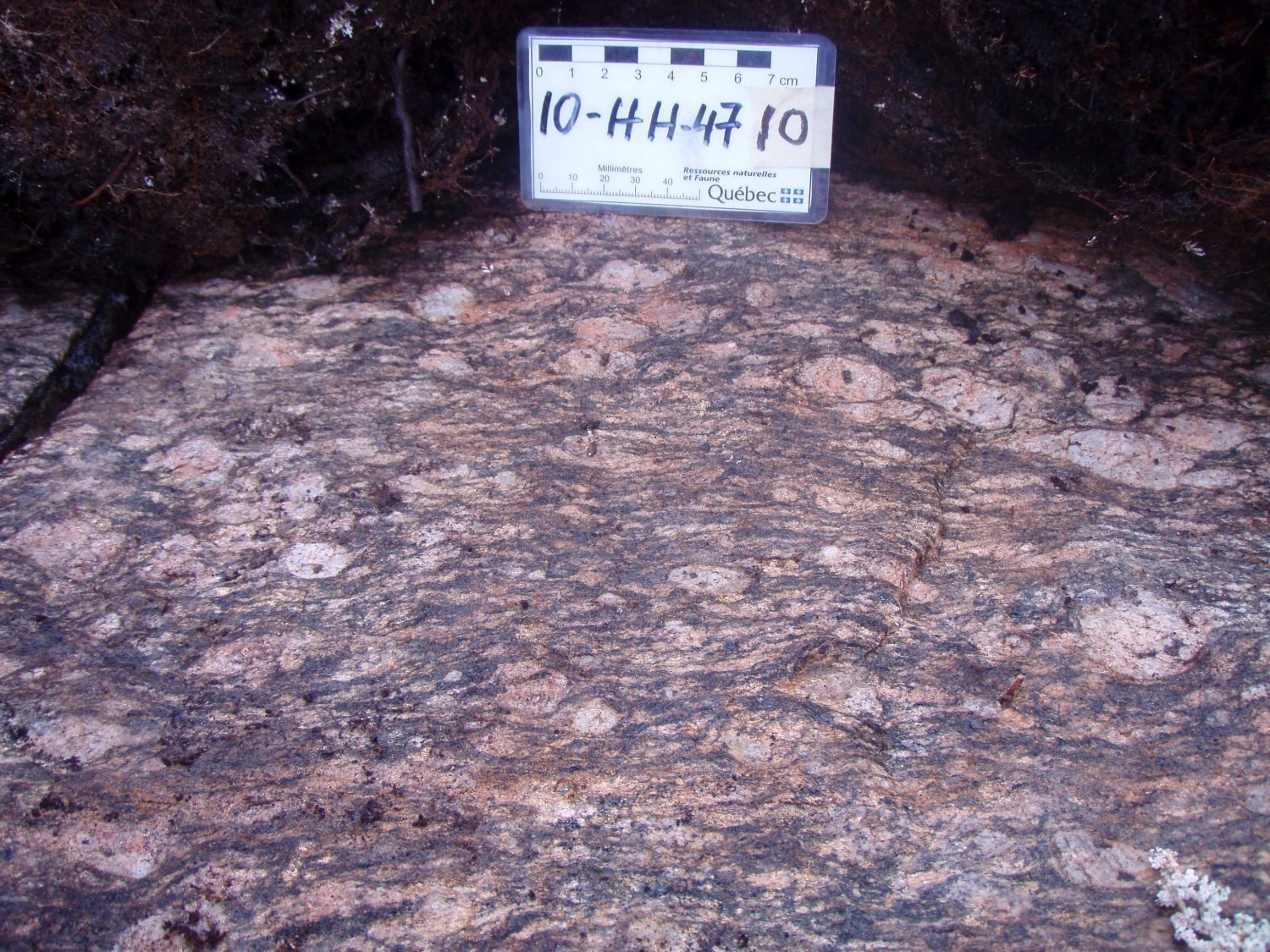 The La Pinaudière Granite consists mainly of granite and locally quartz monzonite. They are coarse to very coarse grained, usually foliated and having a porphyroclastic to augen texture. K-feldspar phenocrystals, typically 3 ﻿cm to 4 cm, reach 8 cm in places and represent up to 30% of the rock. The slightly recrystallized matrix is composed of anhedral grains. Myrmekitic and perthitic textures are generally observed, as well as a graphic texture locally. The rock contains brown biotite (5-7%) as oriented flakes, hornblende (<5%) and garnet in places (<2%). Sphene (<3%), magnetite (<1%) and apatite are generally observed, while zircon is sparse and occurs in fine crystals. Magnetite is generally surrounded by sphene and shows a coronitic texture. Rock alteration is weak and occurs through the development of sericite and chlorite. Some epidote and talc are locally observed. When present, hypersthene is partially amphibolized.

The La Pinaudière Granite (150 km2) is located in the SE part of the Mistinibi-Raude Lithotectonic Domain (Charette et al., 2019). It forms plutons a few kilometres in diameter; the largest is at least 7 km wide by 18 km long and continues further east in Labrador.

Dating on a granite located in the eastern extension of this unit in Labrador, near the Quebec border, yielded an age of ~2571 Ma.

Intrusive rocks of the La Pinaudière Granite contain granitic to tonalitic gneiss enclaves probably coming from the Jannière Complex (ApPjai), the host unit of the intrusion.