Taner (1992) first described this circular-shaped unit and referred to it as the « Juillet Lake Syenitic Intrusion ». Hammouche et al. (2012) later changed this name for the simplified term “Juillet Syenite”. The unit takes its name from Juillet Lake, which is located directly to the east.

The Juillet Syenite (mPjui) is a concentric arrangement of zones that are more magnetic than the surrounding rocks. It consists of two informal units: an alkali feldspar syenite (mPjui1) and a gabbro (mPjui2). 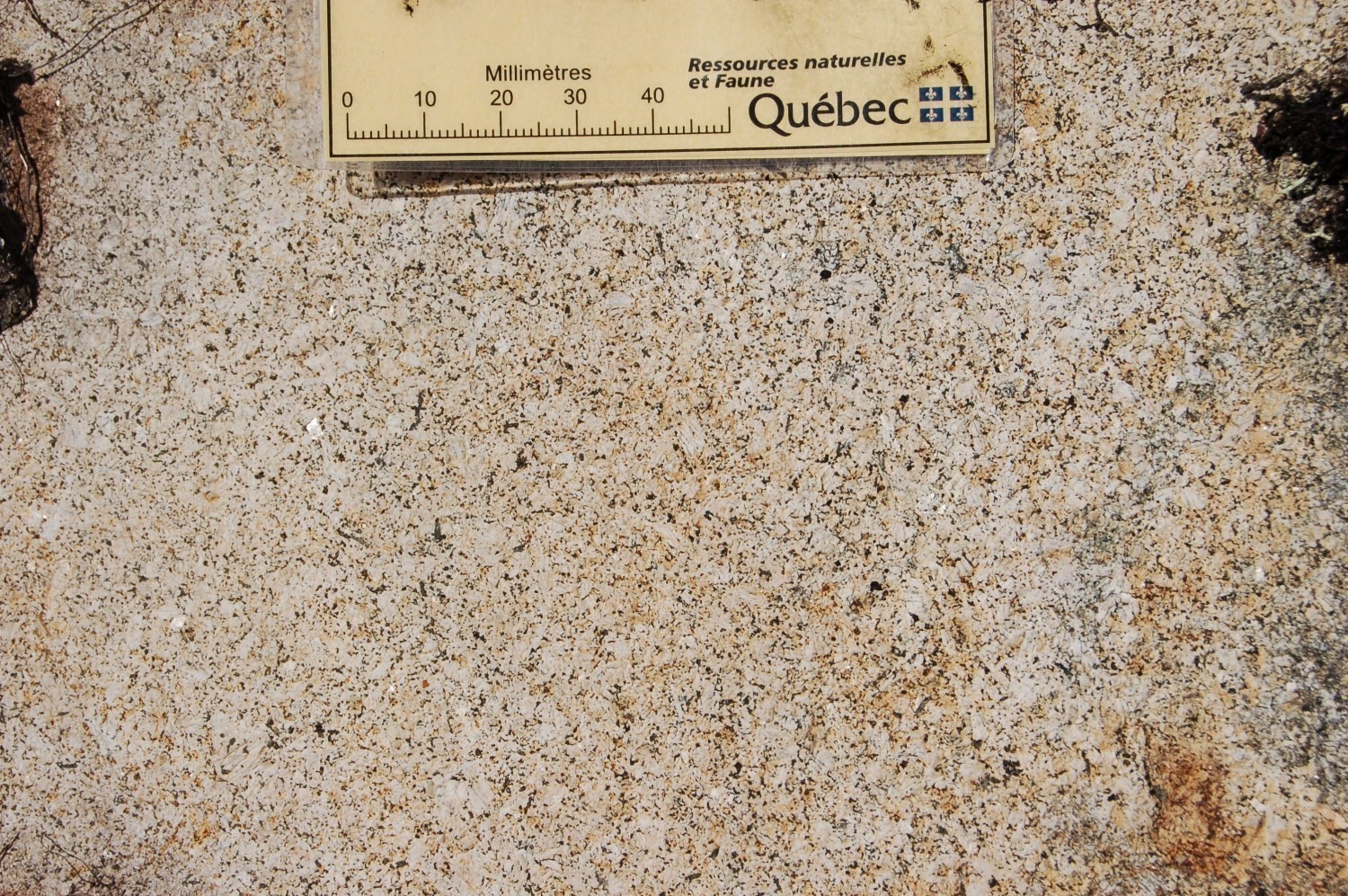 Unit mPjui1 consists of alkali feldspar-clinopyroxene syenite. This unit is the dominant phase of the intrusion and appears as large smooth-surface outcrops in positive relief. The rock is medium grained, homogeneous, undeformed and slightly fractured. It has a white to orange brown patina and is greenish white to brownish green in fresh exposure. It is composed of 80 to 95% orthose and microcline, 10 to 20% clinopyroxene (aegyrine-augite), some amphibole (hastingite) and <1 to 5% fayalite. Accessory minerals are magnetite, plagioclase, zircon, allanite, apatite, biotite, sphene and a bluish green amphibole. The rock is slightly altered. Ferromagnesian minerals are locally replaced by allanite and amphibole on crystal edges. K-feldspar is highly perthitic and zircon forms large euhedral crystals. 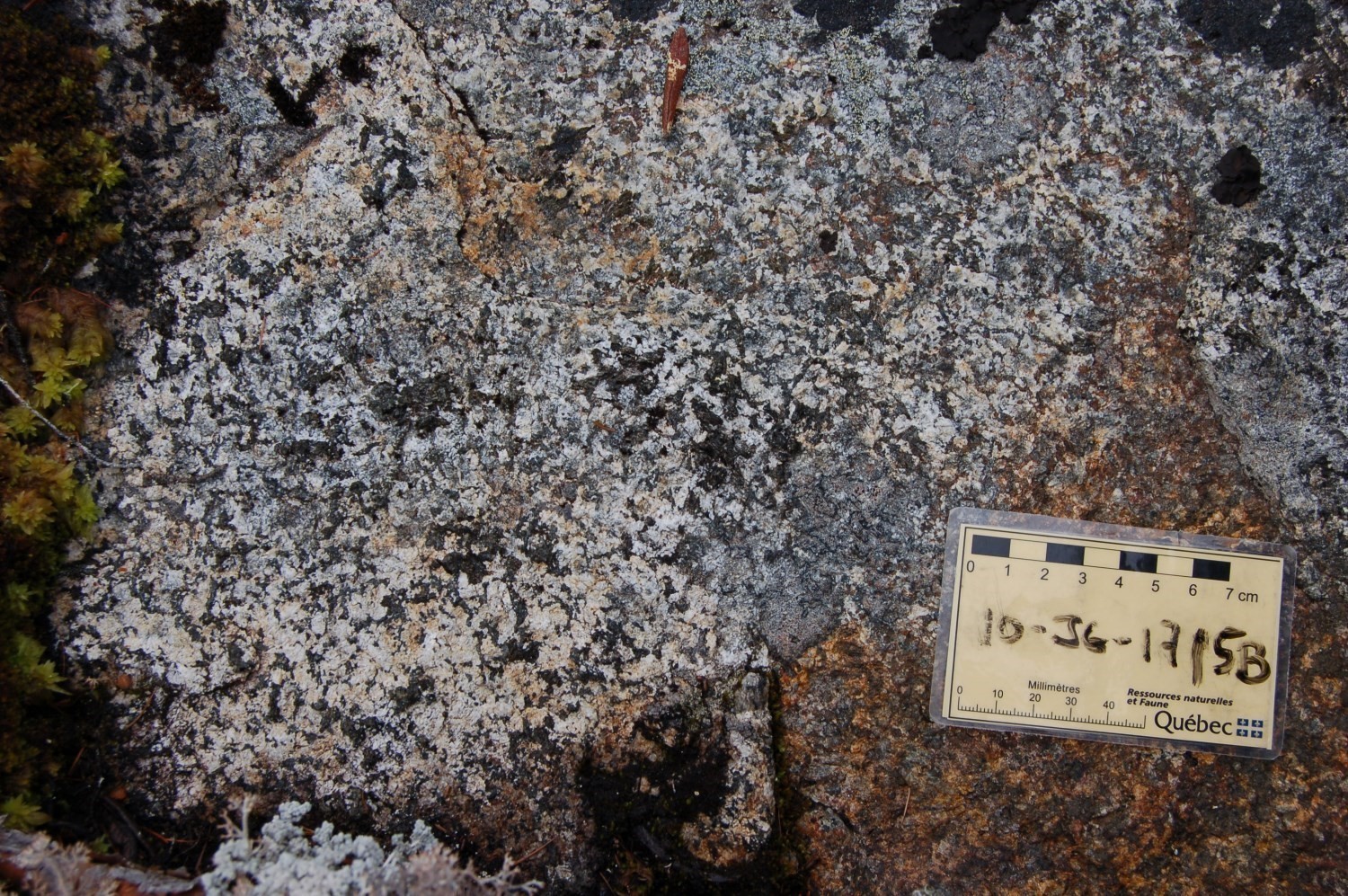 Unit mPjui2 is located in the central portion of the intrusion. It is a homogeneous, massive, medium to coarse-grained, beige to brown and highly magnetic gabbro. The rock is composed of plagioclase, titanium augite, biotite, fayalite and magnetite. The fayalite content ranges from <1% to 30%. Plagioclase crystals are subhedral to anhedral, rounded and coarser than ferromagnesian minerals that are interstitial between plagioclase crystals or clusters. Accessory minerals are apatite, zircon, titanite and allanite.

This gabbro is also observed in sparse isolated outcrops within unit mPjui1. It is therefore possible that some highly magnetic bands visible on the residual component of the total magnetic field map, but not outcropping, could be related to the presence of this magnetite-rich gabbro.

The Juillet Syenite forms a circular intrusion (~8 km in diameter) in the southern Mistinibi-Raude Lithotectonic Domain (Lafrance et al., 2019), on the Labrador border. Unit mPjui2 gabbro covers a limited area (1 km2) in the centre of the intrusion and locally forms a few masses within unit mPjui1 (52 km2).

The Juillet Syenite was sampled for geochronology during the mapping work of Hammouche et al. (2012). Analyses of this sample (2010-JG-1566-A) confirm the Mesoproterozoic crystallization age around 1480 Ma (David et al., 2012). This age is comparable to that of the Ramusio Granite (mPram), but is significantly older than the Michikamats Granite (1459 ±2 Ma; James and Mahoney, 1994) located in Labrador, immediately SW of the Juillet Lake area.

The Juillet Syenite cuts gneiss and tonalite of the Jannière Complex (ApPjai). Decametric enclaves of paragneiss, iron formation and mafic metavolcanics of Archean and Paleoproterozoic units are present in alkali feldspar syenite (mPjui1). Monzonite dykes (lamprophyres?) cutting unit mPjui1 could represent a mafic rock associated with syenite, according to Taner (1992). The author also mentions that the Juillet Syenite could represent a satellite intrusion of the Michikamau Suite. These two units are approximately the same age.