The Michikamau Suite has been the subject of several geological studies, the most important from a mapping perspective being that of Emslie (1970). Taner (1992) redefined this unit as the “Michikamau Anorthositic Suite” based on observations in the Quebec portion of the intrusion. However, Hammouche et al. (2012) preferred to retain the term “Michikamau Intrusion” as it is the most widely used term in Labrador. Charette et al. (2019) preferred to keep this unit to the suite rank because of the mixed composition of this anorthosite-leuconorite intrusion in its central part, and leuconorite-gabbronorite-gabbro intrusion on the edge. The term “Michikamau Suite” was introduced by these authors.

The Michikamau Suite is a mafic stratiform intrusion. Within Quebec, it is divided into five informal units (Hammouche et al., 2012): 1) leucotroctolite (mPmic1); 2) anorthosite containing irregular leuconorite clusters (mPmic2); 3) anorthosite, gabbro and gabbronorite (mPmic3); 4) leuconorite and gabbronorite (mPmic4); and 5) magnetic gabbronorite and gabbro (mPmic5). At the outcrop scale, these units are locally in diffuse contact with each other. Emslie (1970) also describes a layered series, mostly exposed in Labrador, which consists mainly of troctolite, in addition to some lithologies similar to those mentioned above. 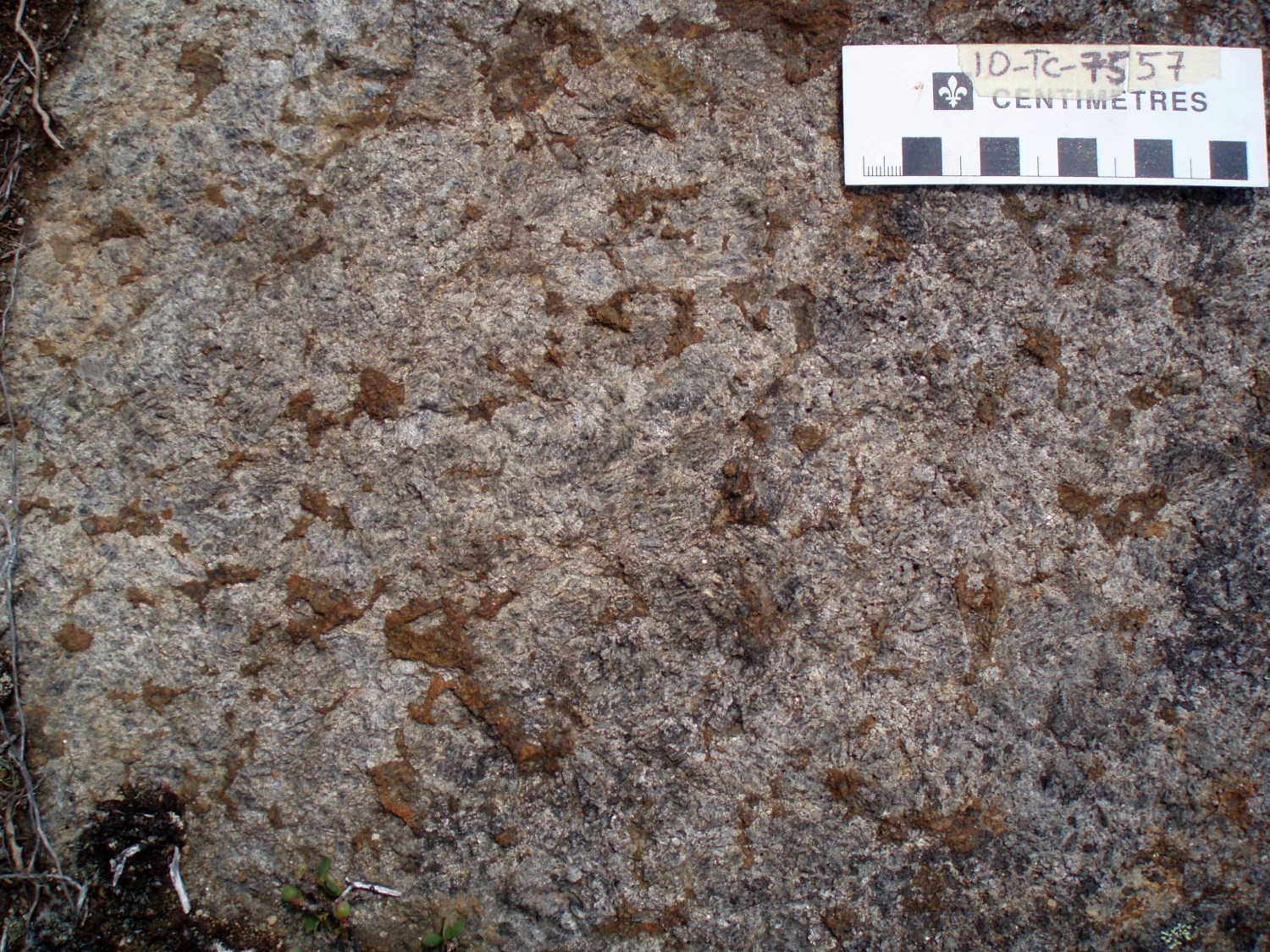 Unit mPmic1 consists of leucotroctolite cut locally by gabbro dykes. The latter, described by Emslie (1970), were not observed during the work of Hammouche et al. (2012). Leucotroctolite is massive, dark greenish grey in fresh exposure and grey in altered surface. It is homogeneous, coarse grained and having a mesocumulate texture. It is composed of andesine-labrador plagioclase (70-90%), olivine (10-20%), orthopyroxene (1-2%), clinopyroxene (1%), and isolated grains of magnetite. Plagioclase is euhedral to subhedral and represents the cumulus phase. Ferromagnesian minerals are interstitial (intercumulus). Olivine is usually fresh, olive-green or blackish green. However, it shows chipping or felt texture in altered surface with a colour ranging from orange yellow to brownish orange. Most olivine grains are in sharp contact with adjacent plagioclase. However, orthopyroxene usually forms partial rims around olivine grains. Orthopyroxene is occasionally altered to serpentine and talc. Microfractures filled with clinopyroxene and late chlorite are also observed in leucotroctolite. 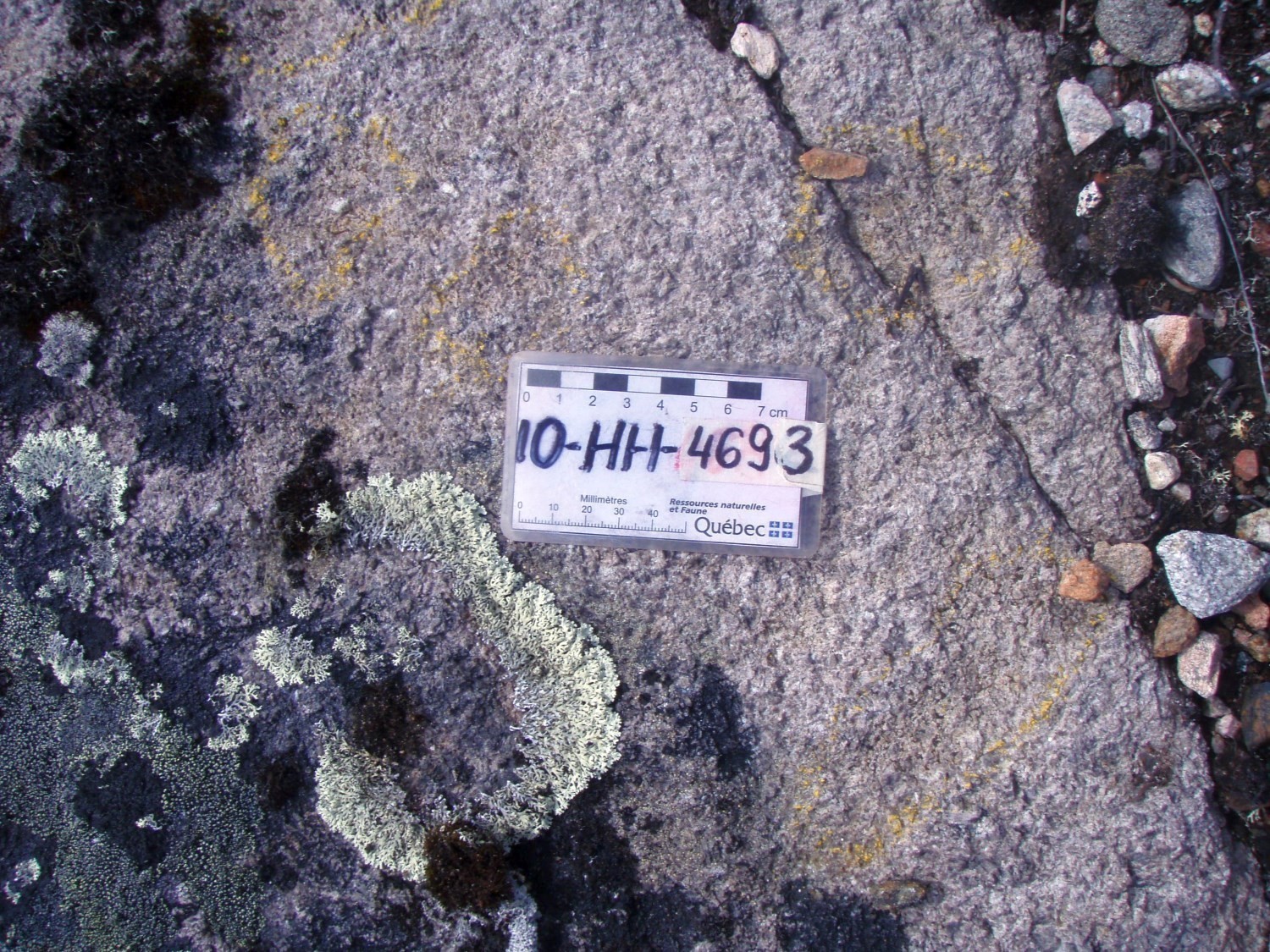 The unit consists of anorthosite containing irregular decimetric leuconorite clusters, which may in some places represent the dominant lithology. These two lithologies are massive and have an adcumulate, more locally mesocumulate texture. They are coarse to very coarse grained and are composed of 65 to 98% plagioclase (andesine-labrador) slightly sericitized (cumulus phase). The size of cumulus crystals is 2 to 4 cm on average, but can regularly reach 10 to 20 cm and, exceptionally, 40 cm. Plagioclase is mainly pinkish and exhibits, in several places, bluish iridescence. Anorthosite contains orthopyroxene and clinopyroxene (5%), olivine more locally (<1%). These minerals form intercumulus crystals varying from 1 mm to 3 cm. Magnetite and sphene are accessory phases. Irregular-shaped grains with feldspar and quartz graphic intergrowths (granophyric texture) are regularly observed in thin section. Orthopyroxene is partially altered to serpentine and talc. Alteration minerals (epidote, chlorite and albite) are present in small amounts and hosted in interstices between primary minerals and in microfractures. In one place, the petrographic study shows a tremolite-carbonate assemblage. In leuconorite, slightly serpentinized orthopyroxene also forms the intercumulus phase and makes 15 to 35% of the rock. Clinopyroxene is limited (<1%) as interstitial grains. 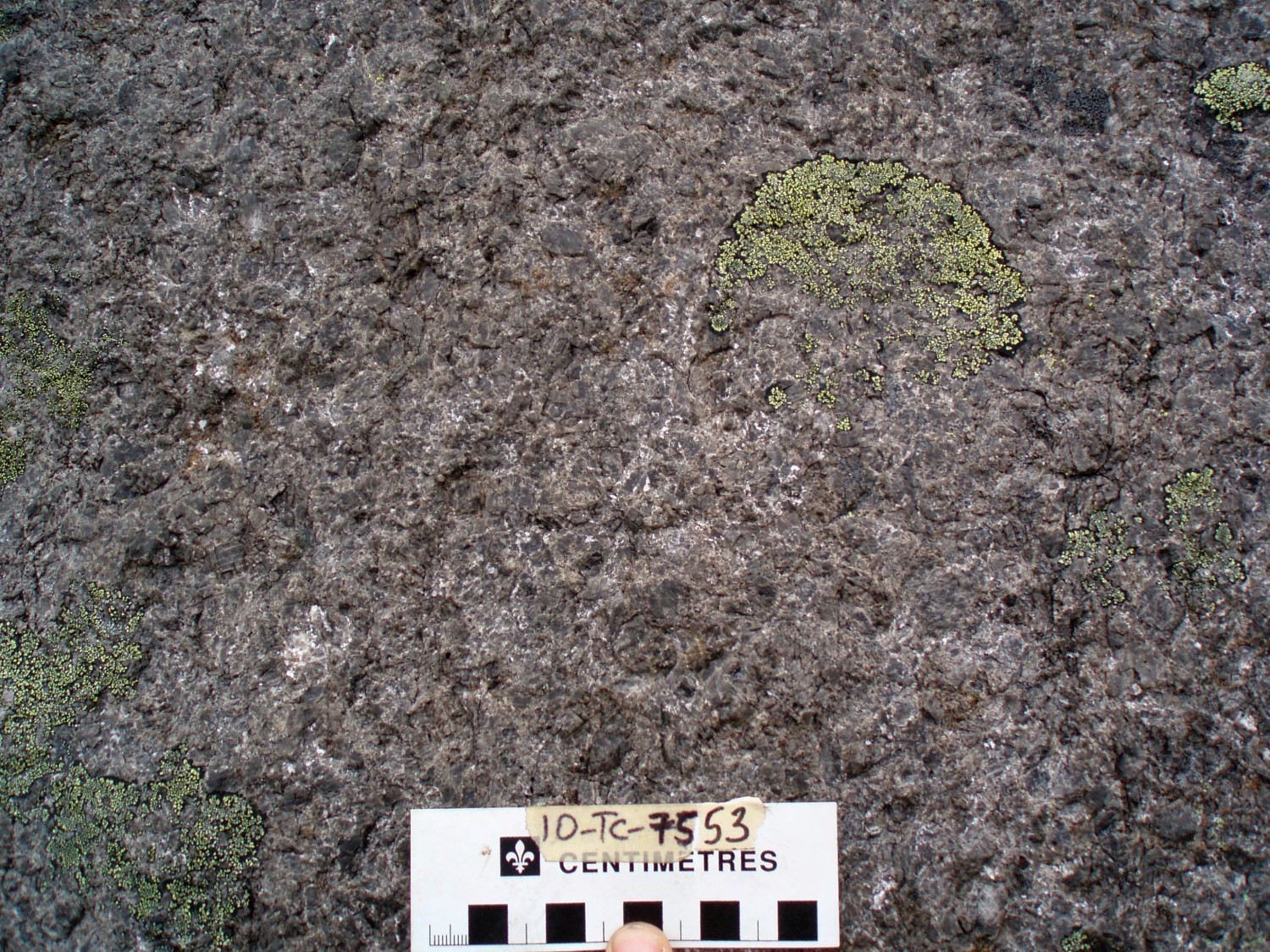 Unit mPmic3 consists of anorthosite, gabbro and gabbronorite, massive and locally magnetic. Anorthosite is medium to coarse grained and has an adcumulate texture. It is composed of plagioclase (90%) slightly sericitized in places, slightly serpentinized orthopyroxene and clinopyroxene. Gabbro and gabbronorite are fine to medium grained, homogeneous and have a mesocumulate texture. They are characterized by the plagioclase-augite ± hypersthene ± magnetite ± ilmenite assemblage. A variety of anorthosite containing biotite and amphibole intercumulus crystals was also observed. Biotite occurs as flakes arranged perpendicular to the edges of the plagioclase crystals, as well as rims around amphibole. 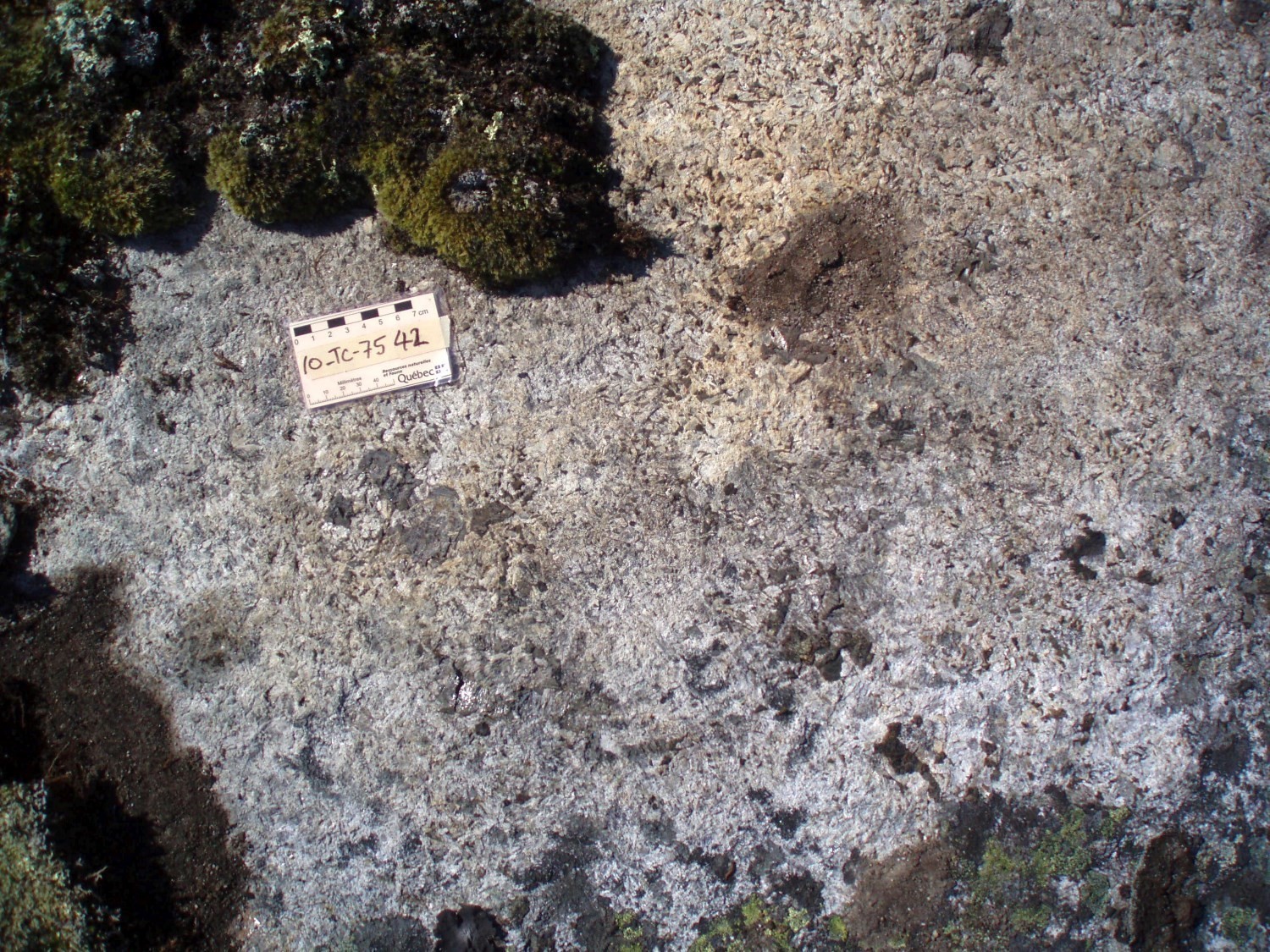 Unit mPmic4 consists of leuconorite, gabbronorite and, more locally, gabbro. These rocks are massive and medium to coarse grained. Their mineralogy is similar to that described in units mPmic2 and mPmic3: plagioclase-orthopyroxene-clinopyroxene ± magnetite ± ilmenite. In leuconorite, pyroxenes are intercumulus phases. Clinopyroxene rims are locally present around orthopyroxene. The latter is in places partially replaced by amphibole (uralitization) and talc and contains fine prismatic hematite inclusions. Reaction rims locally form on orthopyroxene in contact with plagioclase. The granophyric texture described in unit mPmic2 anorthosite is regularly observed in thin sections, indicating the presence of some quartz in the rock. Gabbronorite and gabbro exhibit mesocumulate textures. In these rocks, plagioclase occasionally shows microfractures filled with sericite and iron oxides. 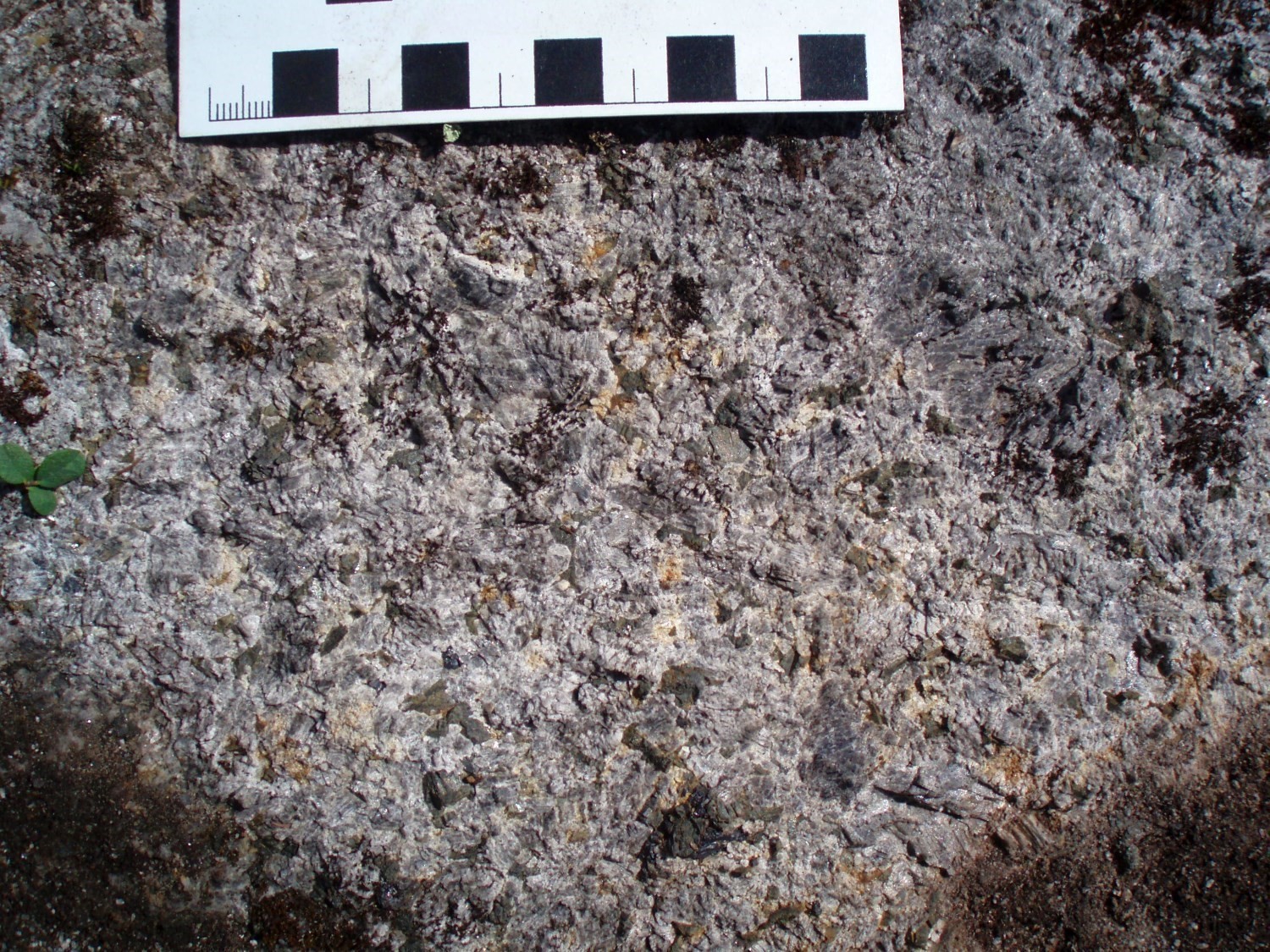 Unit mPmic5 occupies the marginal portion of the intrusion and is associated with a strong positive magnetic anomaly. It consists of gabbronorite and gabbro and contains leuconorite layers similar to those described in other units of the Michikamau Suite. Gabbronorite and gabbro are massive, medium to fine grained, and have a mesocumulate texture. These rocks contain plagioclase, orthopyroxene, clinopyroxene and magnetite. The petrographic study also shows the presence of sericite, chlorite and epidote. Orthopyroxene is partially altered to antigorite and talc.

Emslie (1970) reports that where it is in contact with host rocks, a 30 to 60 cm chilled margin is observed in gabbro. This structure parallels the contact between the intrusion and host rocks, and gradually fades away as it moves to the inner part of the intrusion that has a layered structure variably developed. This layering is produced by the variation in plagioclase, olivine and pyroxene contents at the centimetric (1-10 cm) to locally metric scale. In several locations, layers are discontinuous, pinched, or truncated by other layers over a distance of a few metres. Layered zones are usually separated by massive zones of high thickness.

The Michikamau Suite is a roughly circular intrusion (~20 km in diameter) located in the southern part of the Mistinibi-Raude Lithotectonic Domain, at the Quebec-Labrador border. Two thirds of this intrusion outcrops in Labrador. Unit mPmic2 covers >50% of the Quebec portion of the intrusion (105 km2), while units mPmic3 (33 km2), mPmic4 (35 km2) and mPmic5 (25 km2) cover smaller areas. Unit mPmic1 (11 km2) is the smallest and least exposed of the Michikamau Suite.

Michikamau Suite intrusions cut Archean to Paleoproterozoic units of the Brass Intrusion and Jannière Complex. Very few rock enclaves associated with these units are reported. Emslie (1970) suggests that the Quebec part of the Michikamau Suite represents the top of the intrusion, stratigraphically overlying the layered series when the intrusion was emplaced.