The Brass Intrusion was defined by Hammouche et al. (2012) in the Zeni Lake area to describe a unit of orthopyroxene intrusive rocks. Both Emslie (1972) and Taner (1992) had identified pyroxene rocks at the periphery of the Michikamau Suite (mPmic).

The Brass Intrusion consists of an enderbite unit (nAbrs1) and an olivine gabbro unit (nAbrs2). 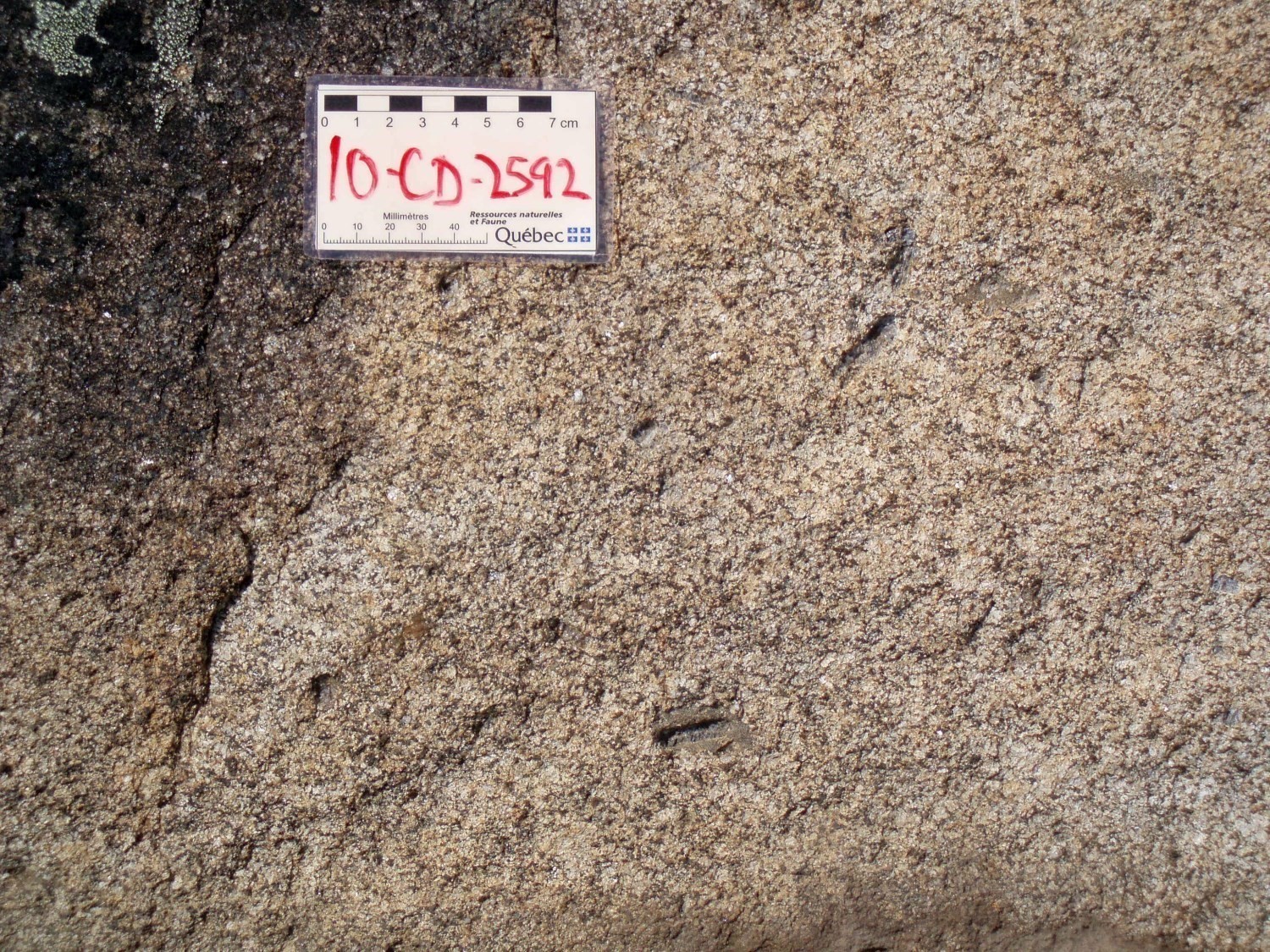 Unit nAbrs1 consists mainly of little or not foliated enderbite. It also locally contains opdalite and some hypersthene diorite. These more or less recrystallized and medium-grained rocks have a homogeneous and even-grained appearance. Enderbite and opdalite are typically beige or light grey in fresh exposure and brownish in altered surface. They are composed of quartz, plagioclase, orthose and microcline in varying amounts, biotite, amphibole and hypersthene. Biotite content can be as high as 15% in places. Accessory minerals consist of isolated magnetite grains, apatite and sphene inclusions. Hypersthene diorite is not widespread. It is whitish and medium grained. It is homogeneous and massive, and contains clinopyroxene, biotite and magnetite.

In all these lithologies (enderbite, opdalite and hypersthene diorite), secondary alteration is marked by the presence of sericite, chlorite, epidote and talc. In thin sections, the development of secondary amphibole and biotite is observed at the expense of hypersthene. The unit is locally cut by decimetric to metric irregular-shaped leuconorite clusters, identical to that observed in the Michikamau Suite. 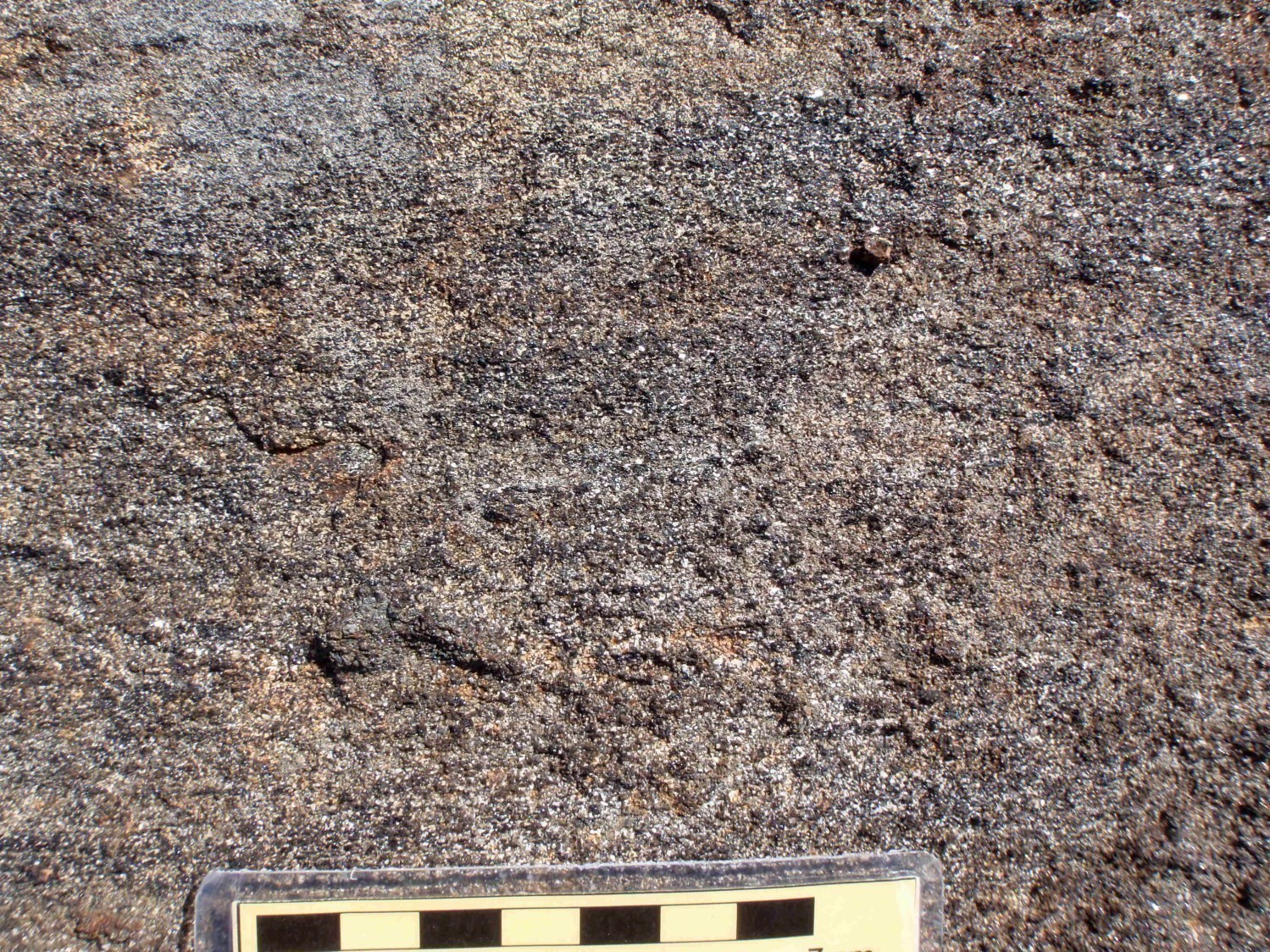 Unit nAbrs2 consists of fine to medium-grained gabbro, slightly foliated. In altered surface, the rock is dark brown with a rusty shade. In fresh exposure, it is finely spotted with white (plagioclase) in a dark greenish background. The rock is homogeneous and weakly recrystallized. It is composed of plagioclase, augite, hornblende, fayalite olivine (5-7%), hypersthene (3-4%) and magnetite (~3%). It is minimally altered and contains small amounts of chlorite and, very locally, epidote inclusions in plagioclase.

The Brass Intrusion is ~5 km wide and at least 18 km long, continuing eastward in Labrador. Unit nAbrs1 covers an area of ~116 km2 in the southern part of the Mistinibi-Raude Lithotectonic Domain (Charette et al., 2019). The nAbrs2 gabbro unit (11 km2) forms a strip on average 600 m thick located at the western edge of unit nAbrs1.

A dating in Labrador of an orthopyroxene granodiorite, located in the extension of rocks assigned to the Brass Intrusion, yielded a Neoarchean age of ~2581 Ma, indicating that these rocks cannot be associated with the Mesoproterozoic Michikamau Suite.

Emslie (1970) interpreted pyroxene rocks that he had recognized at the border of the Michikamau Suite as a package of granulite facies metamorphic rocks. Taner (1992) interpreted these same rocks as a marginal unit in the Michikamau Suite. Instead, the Neoarchean age obtained in the Brass intrusion in Labrador indicates that there is no genetic relationship between these two units.