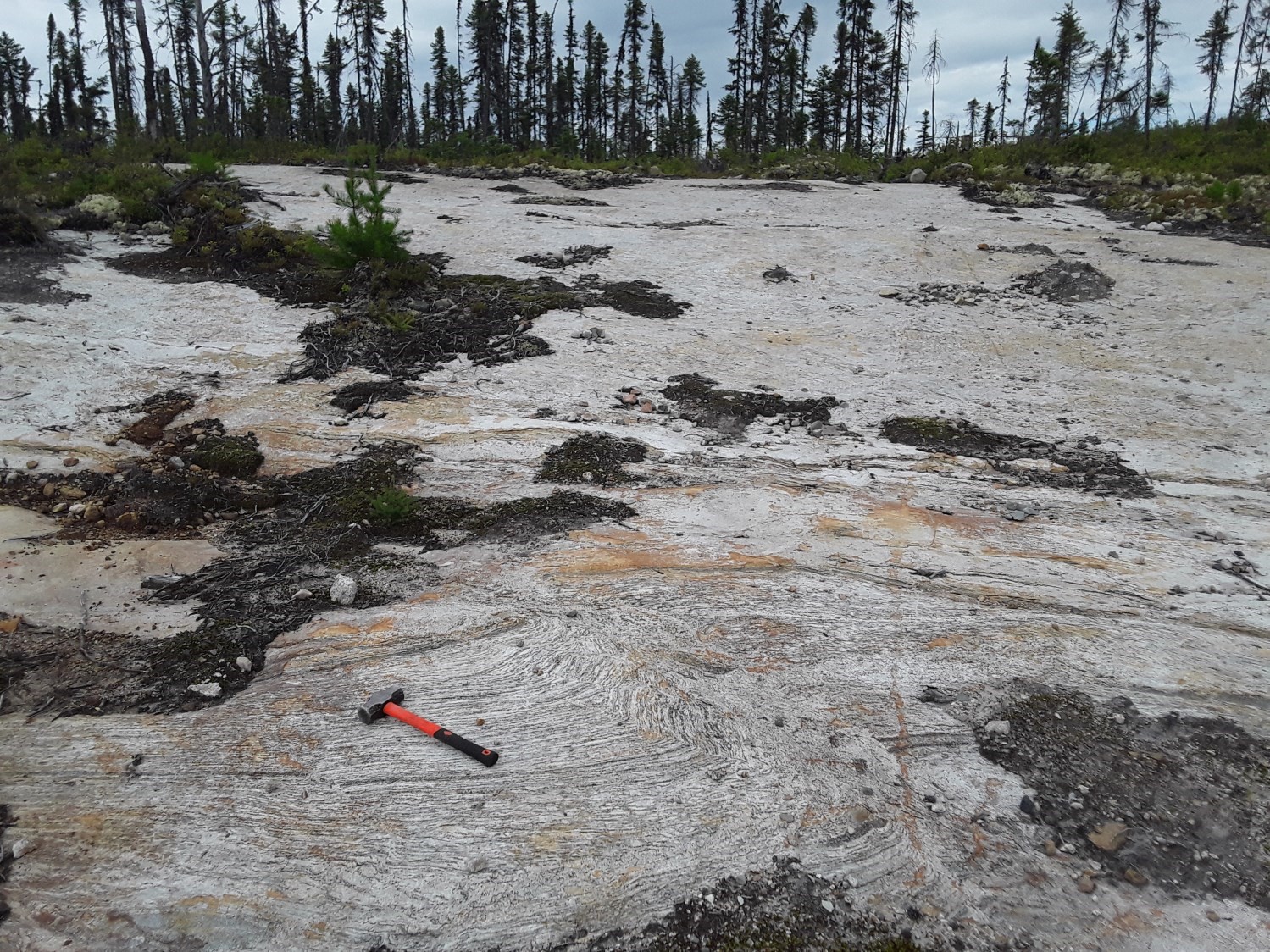 The Vertu Structural Domain (DSvtu) was defined from a geological mapping survey by Moukhsil and El Bourki (2020) in the Girardville area (NTS sheets 32H02).

Stratigraphic units belonging to the Vertu Structural Domain are:

Outcrops of the Vertu Structural Domain display a planar fabric that is mainly represented by secondary tectonometamorphic mineral foliation and mylonitic foliation or banding in intrusive rocks, or by gneissosity in metasedimentary rocks.

The Vertu Structural Domain is characterized by a fairly homogeneous trajectory of the planar fabric (Sn) in the different lithostratigraphic units. This planar fabric is mainly expressed by secondary tectonometamorphic mineral foliation, foliation or mylonitic banding in intrusive rocks, or by gneissosity in metasedimentary rocks of the study area. It has an average NNW-SSE orientation and an eastward dip (mean foliation Sn: 341°/38°). 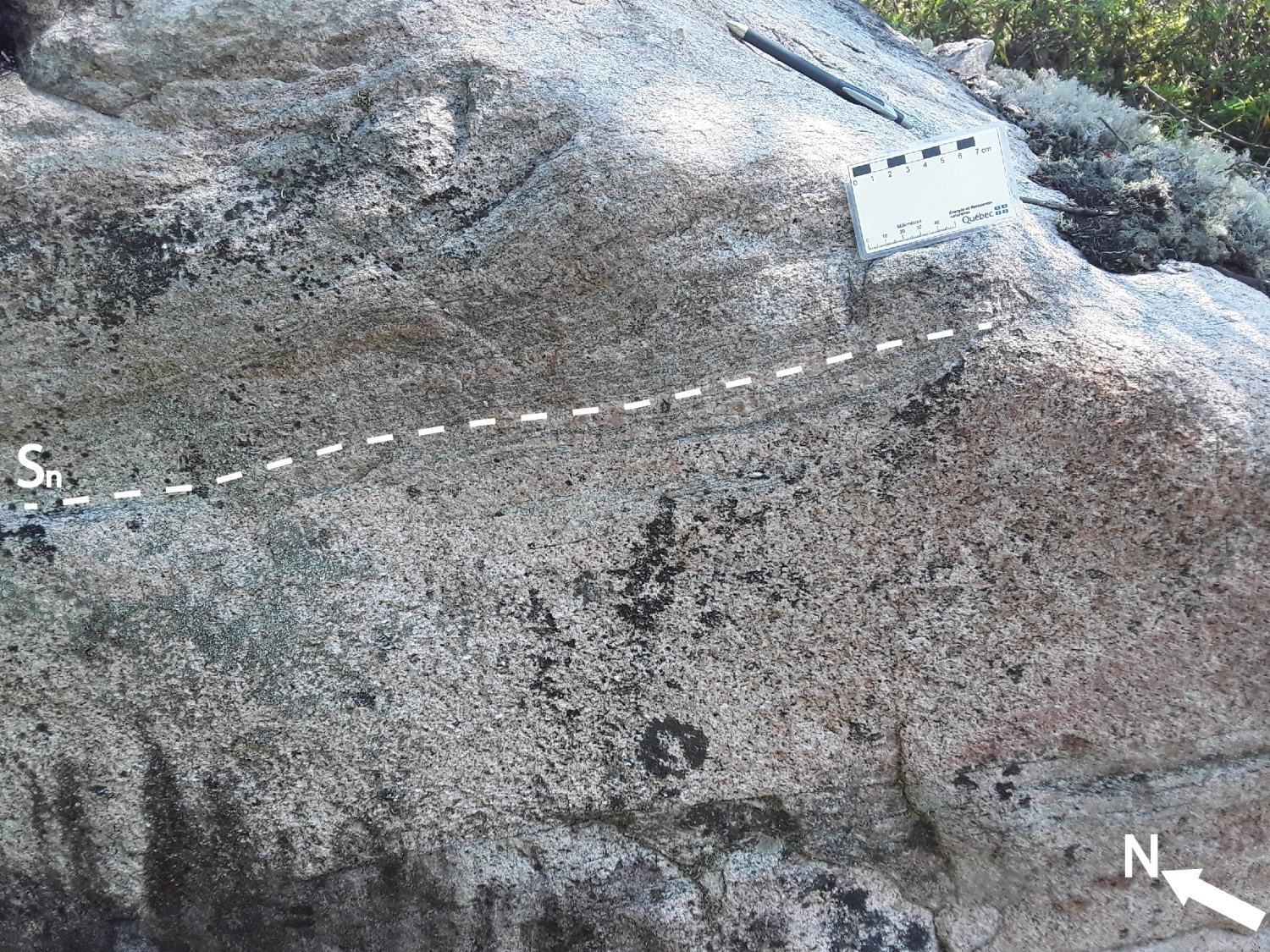 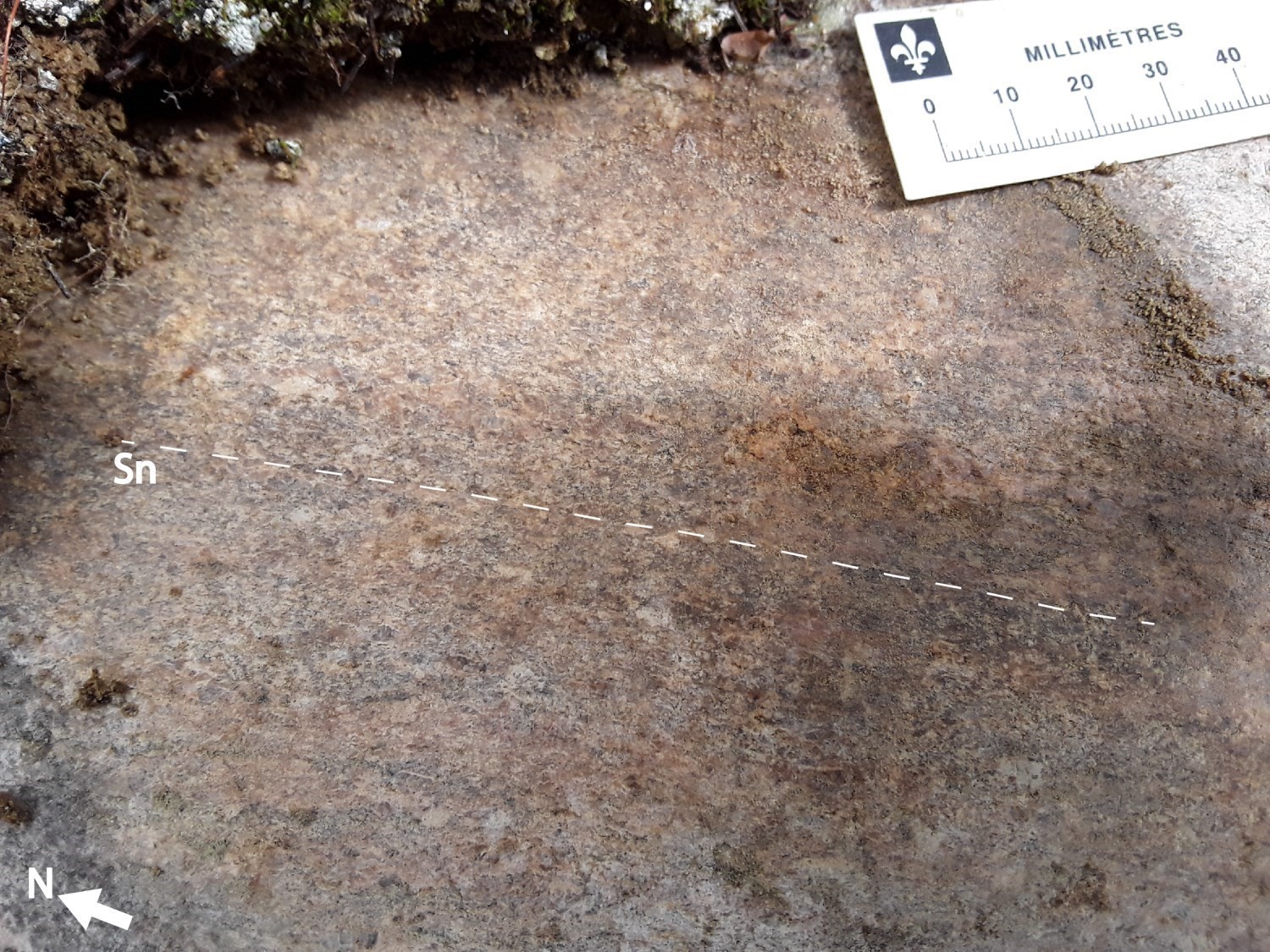 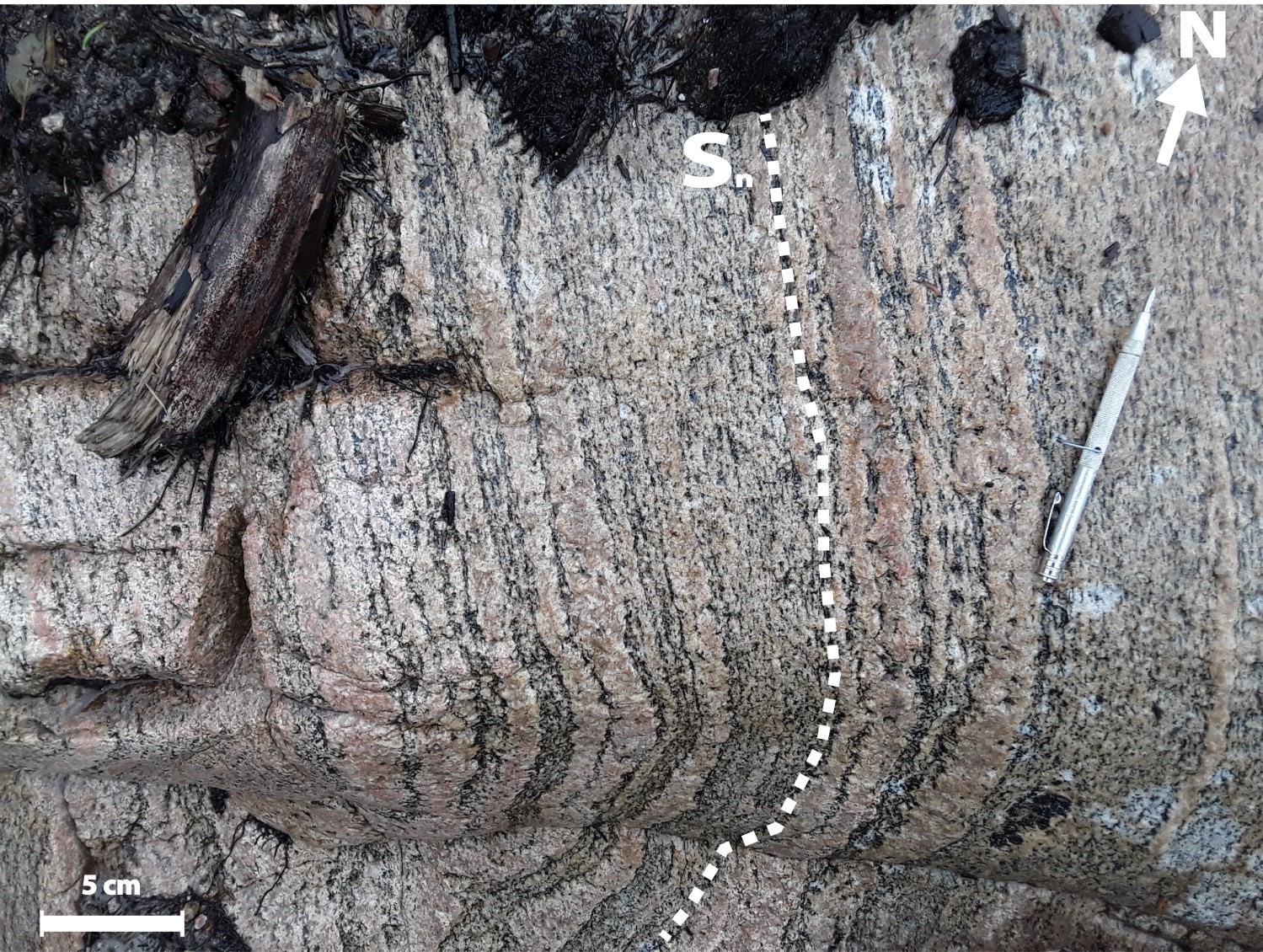 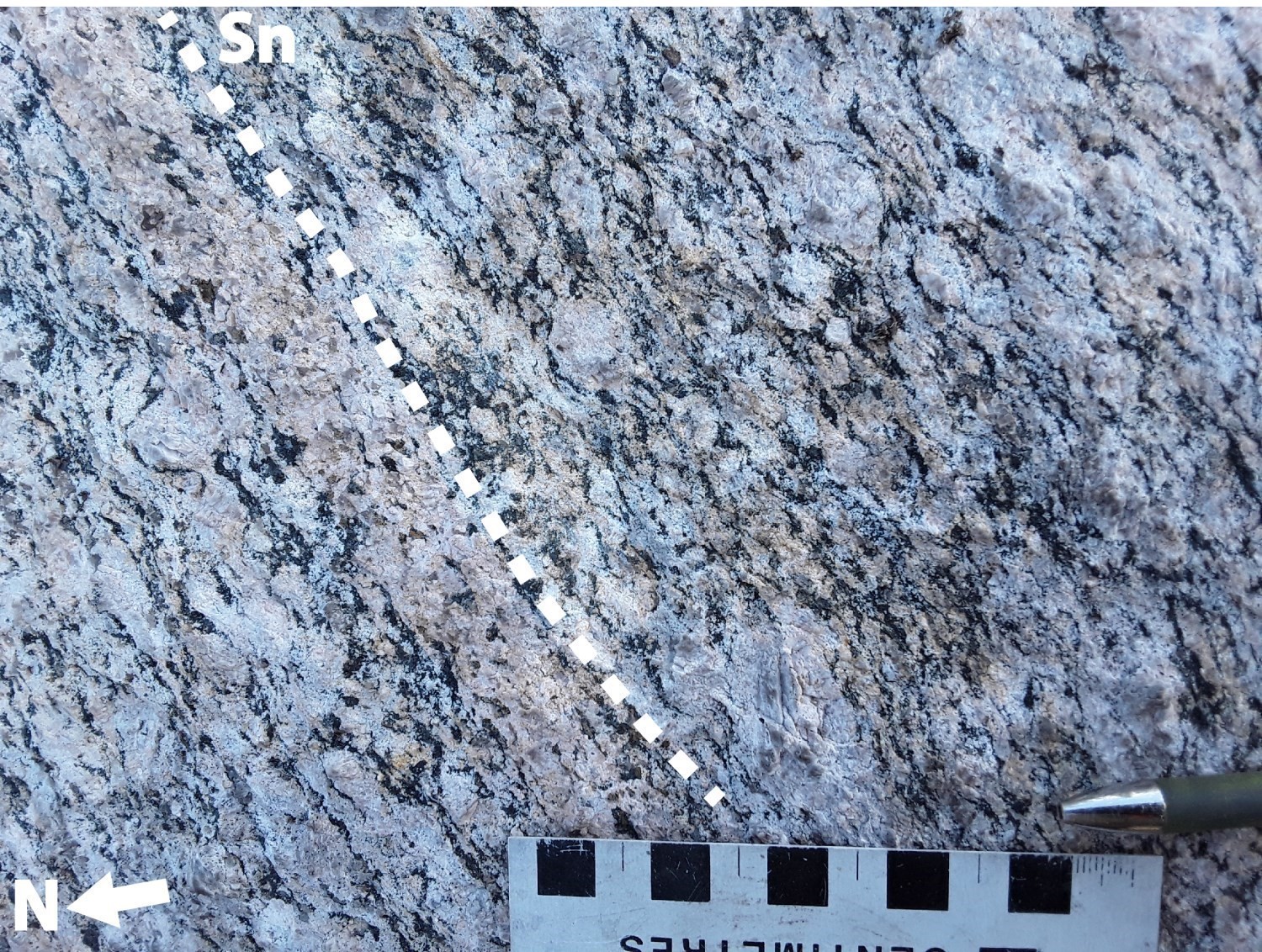 In rocks of the Vertu Plutonic Suite (mPvet) and Sainte- Hedwige Intrusive Suite (mPsh2), the Sn planar fabric is mainly expressed by secondary tectonometamorphic mineral foliation or mylonitic banding in faulted areas. This foliation is generally characterized by the preferential alignment of minerals in the rocks, in particular ferromagnesian minerals (biotite or orthopyroxene), magnetite and feldspar porphyroclasts (twisted and broken in places) and, locally, by the flattening of quartz grains parallel to the planar fabric. In metasedimentary rocks of the Barrois Complex, the Sn foliation is marked by gneissosity characterized by alternating millimetric to centimetric leucocratic and mesocratic to melanocratic layers.

Mineral lineations borne by these planar fabrics are, in general, secondary mineral lineations of tectonometamorphic type. Their mean orientation is 104° and they have an oblique component (average Ln: 104°/44°). In stereographic projection, these lineations are distributed in a circle around the mean foliation vector. 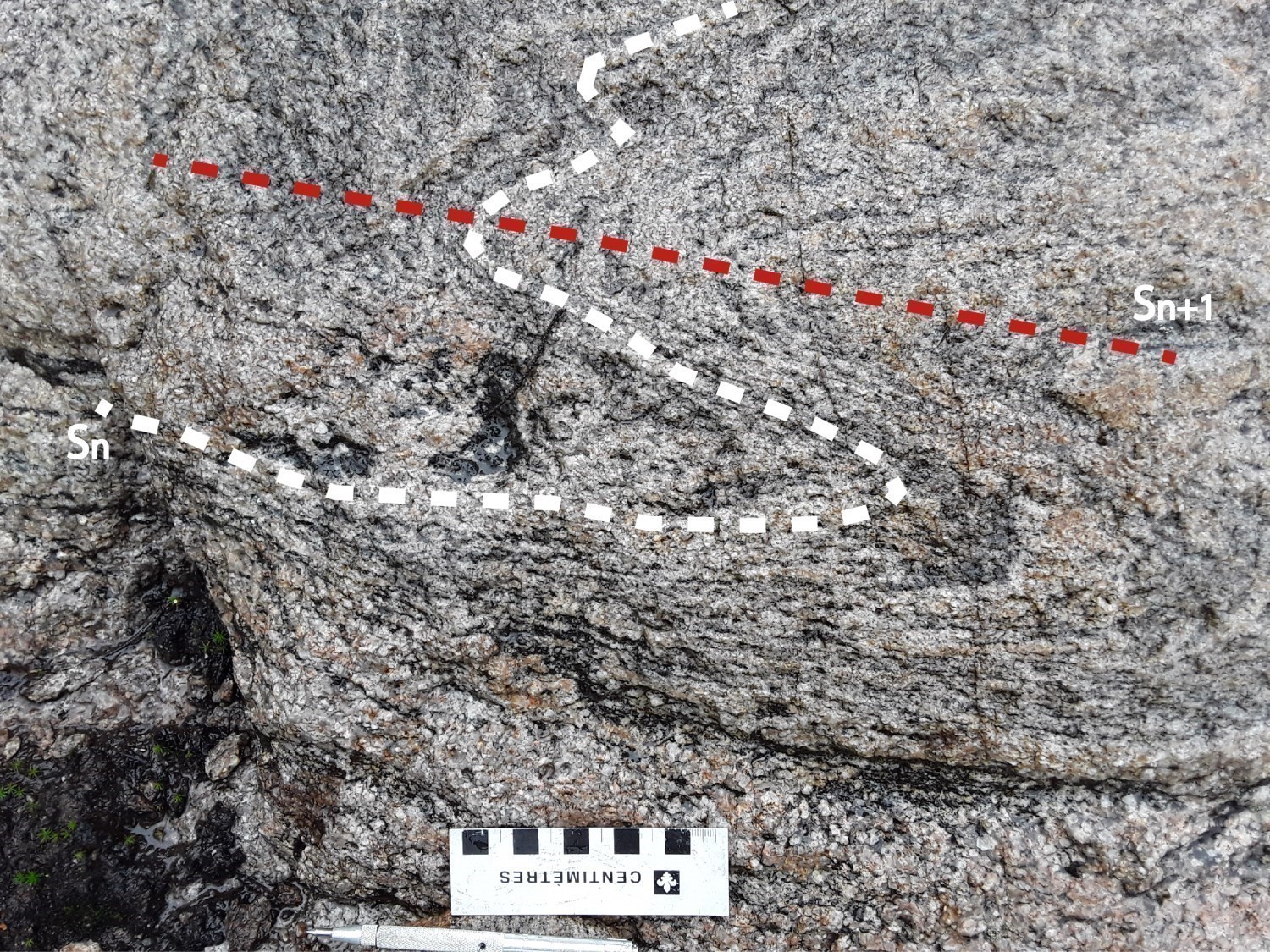 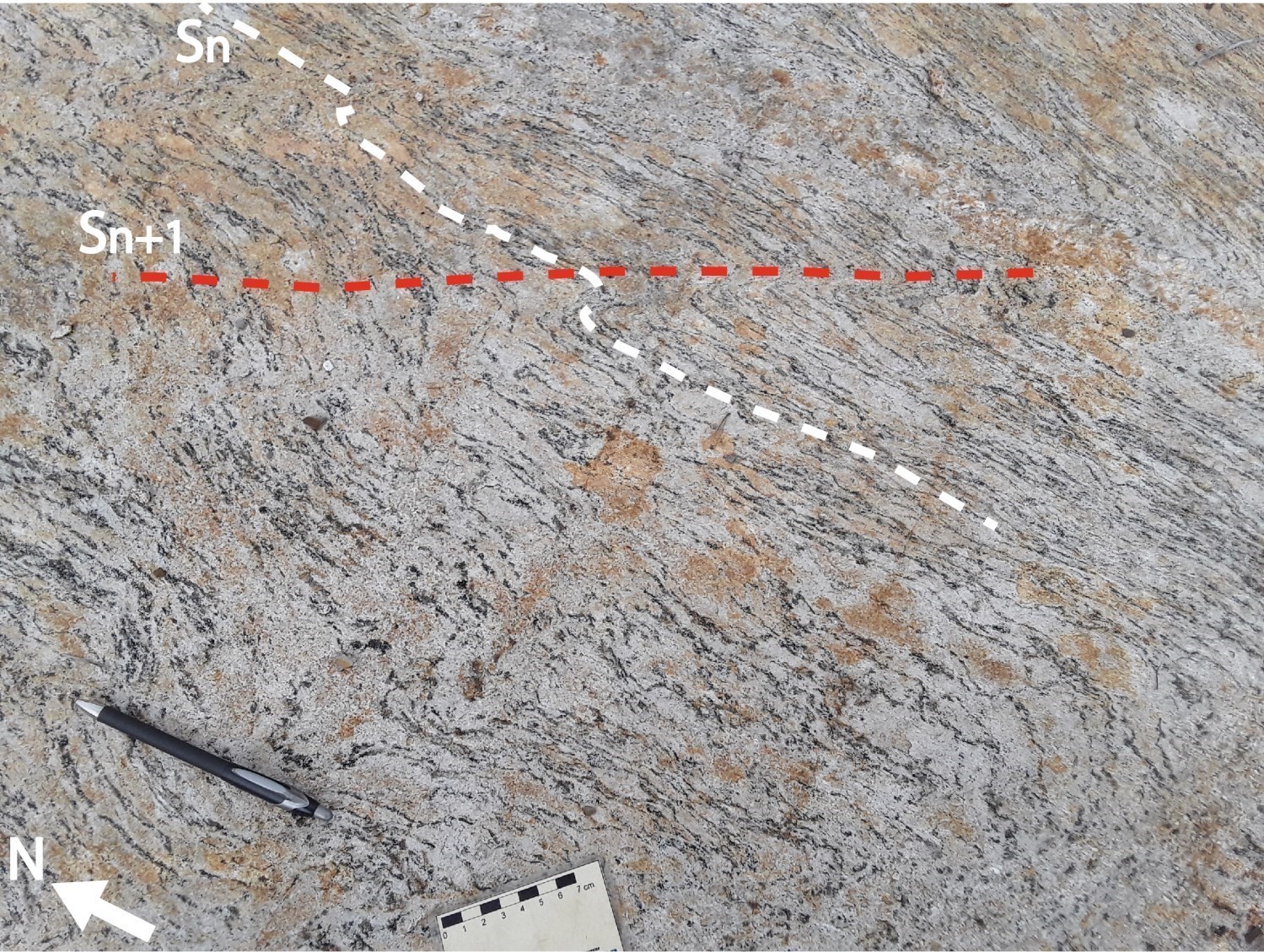 In the Vertu Structural Domain, some outcrops reveal the Sn planar fabric cut by a second tectonometamorphic foliation Sn+1. This is easily recognizable at fold hinges and is generally characterized by the preferential orientation of minerals and the flattening of quartz grains. However, as in the other structural domains of the area, this deformation phase (Sn+1) is difficult to measure in the field as it is discrete and non-penetrative.

Analysis of the distribution of the planar fabric and geophysical lineaments inferred from maps of the total aeromagnetic field and its derivatives (Intissar and Benahmed, 2015) allowed the interpretation, in the western part of the Vertu Structural Domain, of two N-S oriented fold axes which are of the synformal and antiformal overturned type, the first towards the east and the second towards the west.

The Vertu Structural Domain is cut by two families of faults inferred from high-resolution magnetic maps or from field observations. The first family, oriented N-S to NNW-SSE, is represented by normal faults of undetermined movement, whose orientation is subparallel to the structural pattern interpreted for this domain, and which probably played a role in the intrusion of the Vertu Plutonic Suite (mPvet). The second family, oriented E-W to ENE-WSW, is represented by a first fault inferred from geophysical data and a second thrust fault south of the intrusion (mPvet2). This reverse fault is less documented due to the limited number of outcrops.

The Vertu Structural Domain has undergone moderate to strong deformation, characterized by a fairly homogeneous planar fabric more relatable between outcrops. The Sn planar fabric represents the early phase of deformation and is characterized by primary or secondary tectonometamorphic mineral foliation (or mylonitic banding) in intrusive rocks of the Vertu Plutonic Suite (mPvet1 and mPvet22) and Sainte-Hedwidge Intrusive Suite (mPshe2), or by gneissosity in metasedimentary rocks of the Barrois Complex (mPboi4 and 4c).

The trajectory of the Sn foliation defines two folds, one synform overturned eastward and one antiform overturned westward, whose axial planes are oriented N-S, which could indicate that the area underwent an E-W compression phase.

The study of about fifteen samples representative of lithostratigraphic units of the Vertu Structural Domain (DSvtu) under a polarizing microscope allowed characterizing the type of metamorphism as well as the spatial distribution of the latter. Mineralogical assemblages and petrographic characteristics of samples indicate that metamorphic conditions in the study area mainly reached the granulite facies, which is characterized mainly by the presence of orthopyroxene, perthite (K-feldspar with albite exsolution) and stretched quartz grains, testifying to temperature (600°C) and pressure conditions typical of this facies. The domain also includes two zones characterized by an assemblage of ferromagnesian minerals (biotite and hornblende; absence of pyroxene) representative of amphibolite facies metamorphism.

In the Vertu Structural Domain, the high-resolution total magnetic field map (Intissar and Benahmed, 2015) indicates that the geophysical pattern is quite homogeneous, including areas of highly contrasting magnetic susceptibility of high magnetism. In the SW part of the domain, the magnetic pattern displays a circular ring texture with low-density magnetic banding in rocks of the Vertu Plutonic Suite mPvet2 unit. Elsewhere, the magnetic pattern is rather banded, but lineaments are curvilinear with a magnetic susceptibility that is moderate to intense.