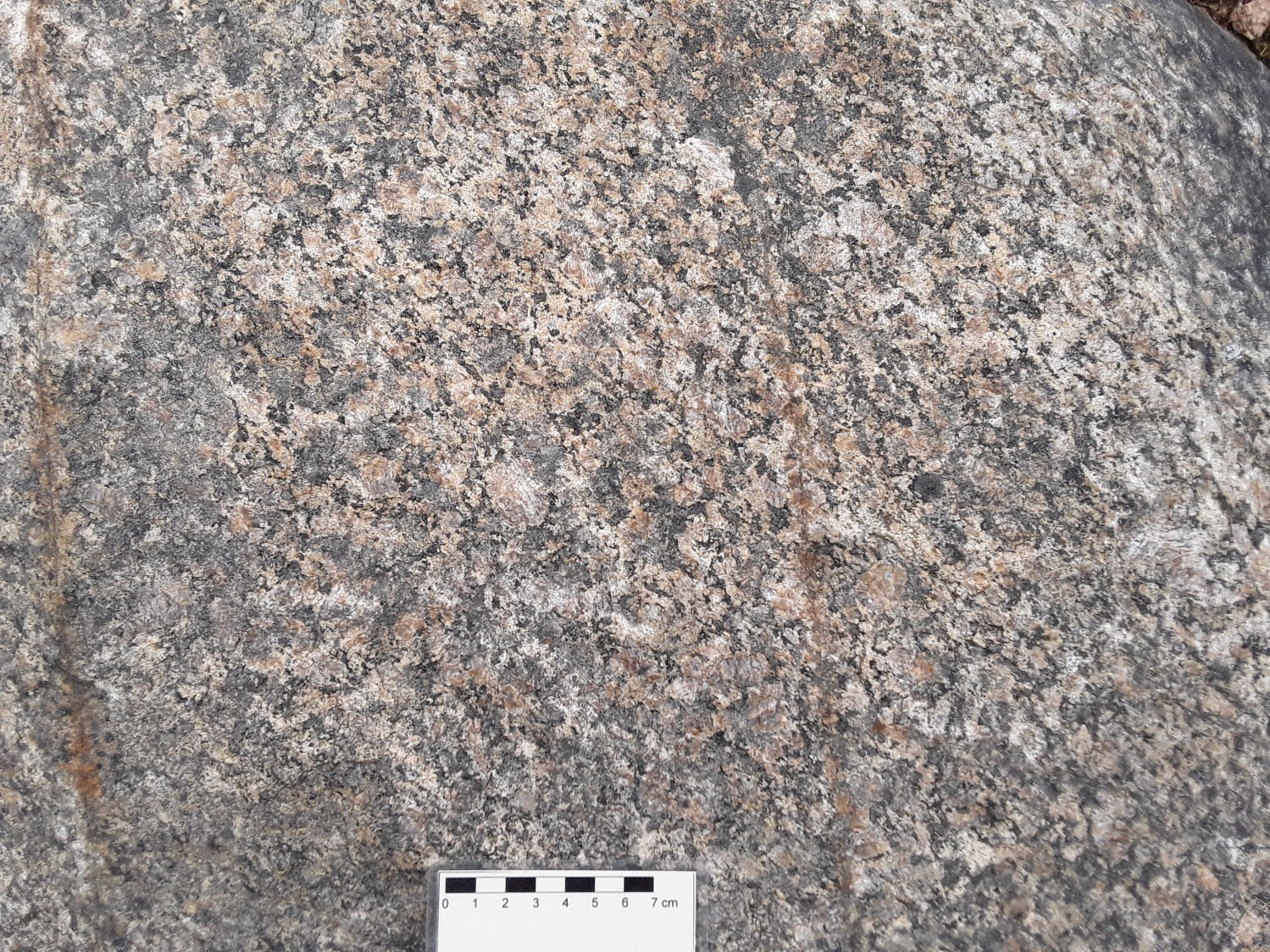 The Vertu Plutonic Suite was defined by Moukhsil and El Bourki (2021) during mapping work in the northern part of the town of Girardville, NW of Lake Saint-Jean (sheet 32H02).

The Vertu Plutonic Suite is a multiphase batholith consisting of hypersthene syenite, quartz syenite, alkali feldspar granite, mangerite, syenogranite and gabbro. The suite is divided into two informal units, mPvet1 and mPvet2. The lithologies of this suite are magnetic and the batholith is easily identifiable on aeromagnetic maps (Intissar and Benahmed, 2015). 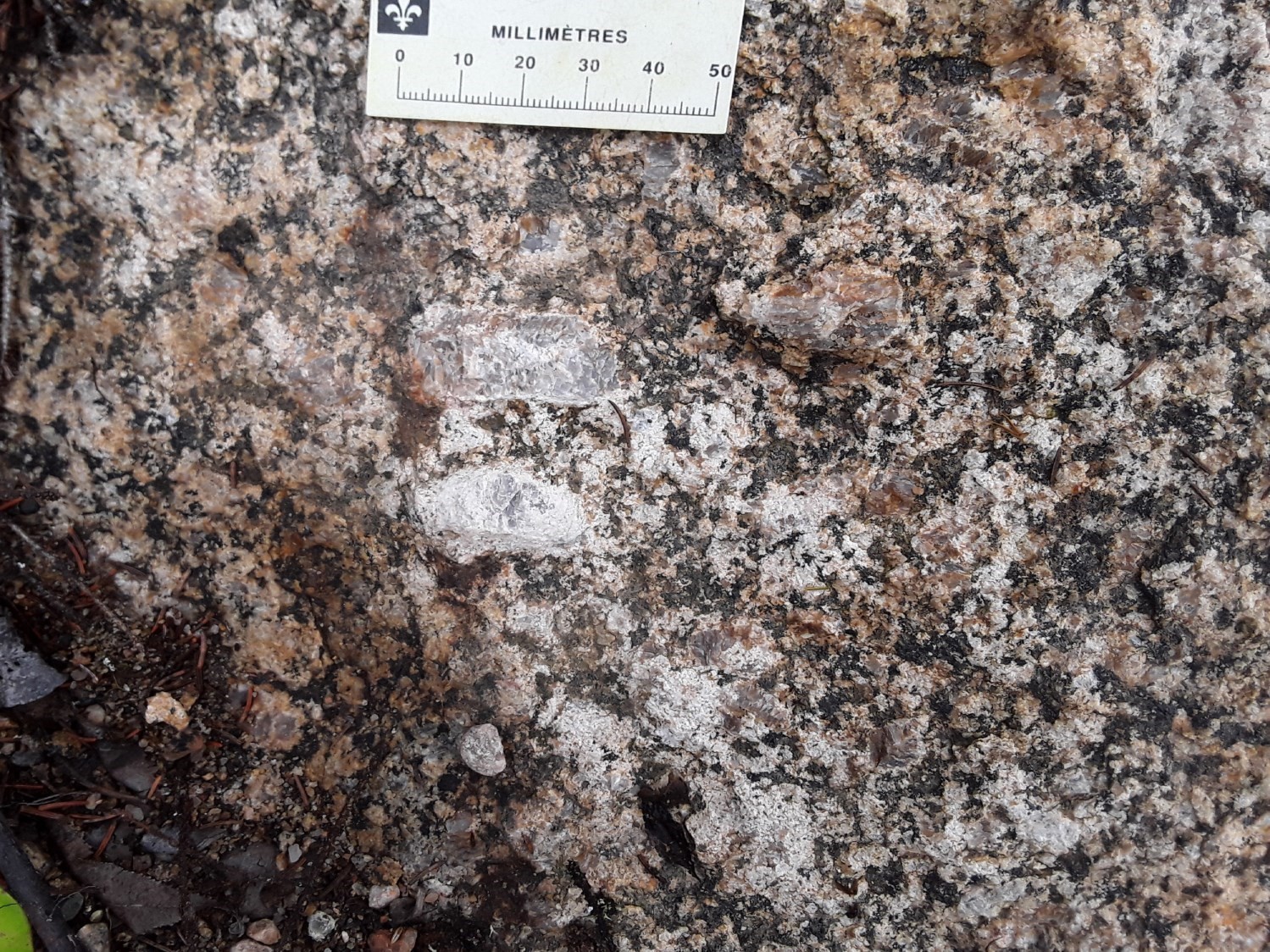 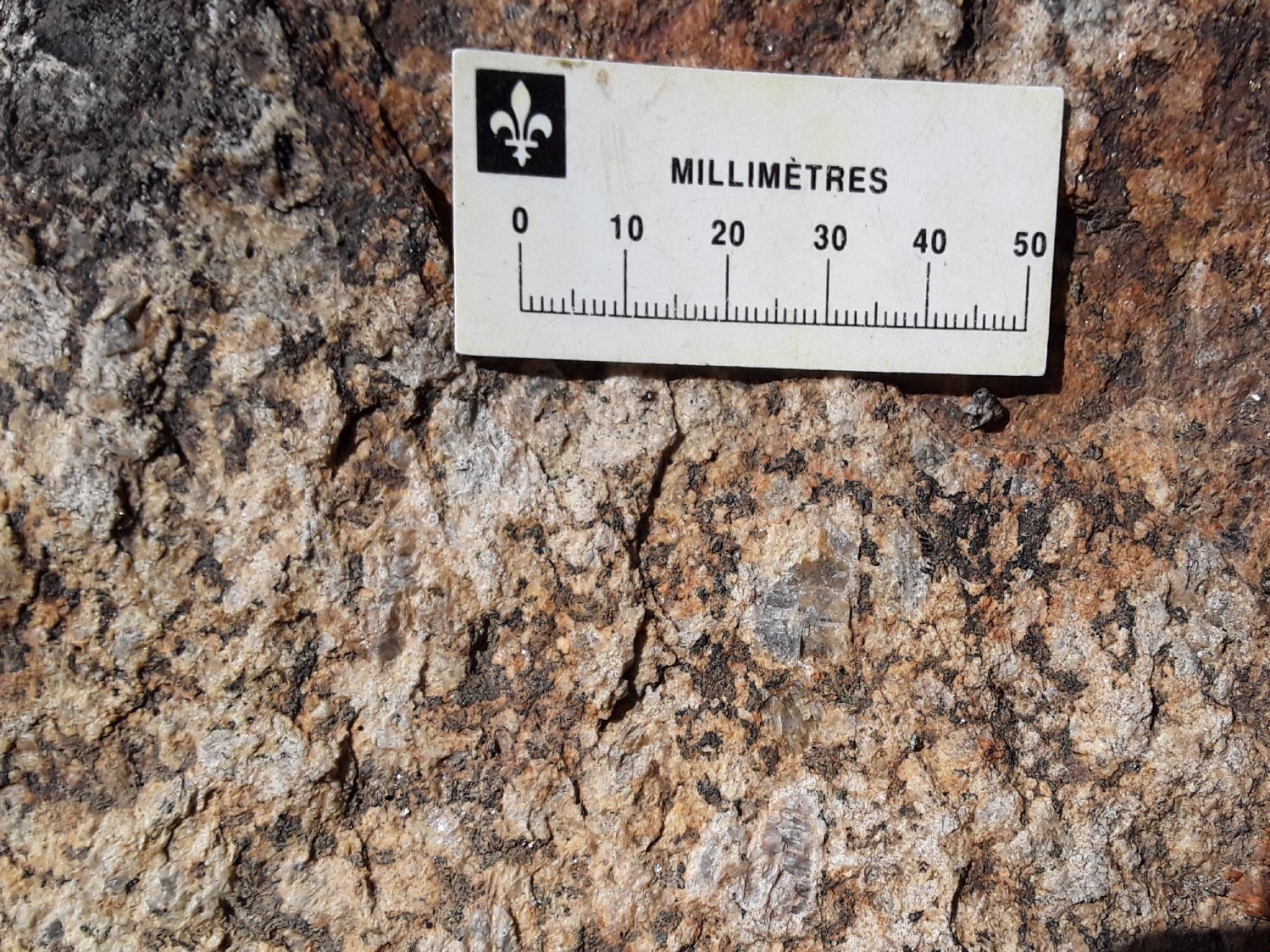 Mangerite (hypersthene monzonite) is brownish to whitish in altered patina and generally greenish in fresh exposure. It is coarse grained and several outcrops in this unit are K-feldspar porphyraceous and locally rapakivi (e.g. outcrop 2020-AM-116). Phenocrystals are 2 cm to 4 cm long and locally account for up to 35% of the rock. In addition to K-feldspar, mangerite observed in outcrops contains quartz, plagioclase, orthopyroxene, clinopyroxene, biotite, amphibole and magnetite. A coronite texture characterized by orthopyroxene surrounded by a thin crown of clinopyroxene is locally observed. Generally, mangerite is very slightly foliated (absence of a preferential orientation of phenocrystals) and only a few ferromagnesian minerals (orthopyroxene and clinopyroxene) seem to indicate a preferential orientation (magmatic foliation). 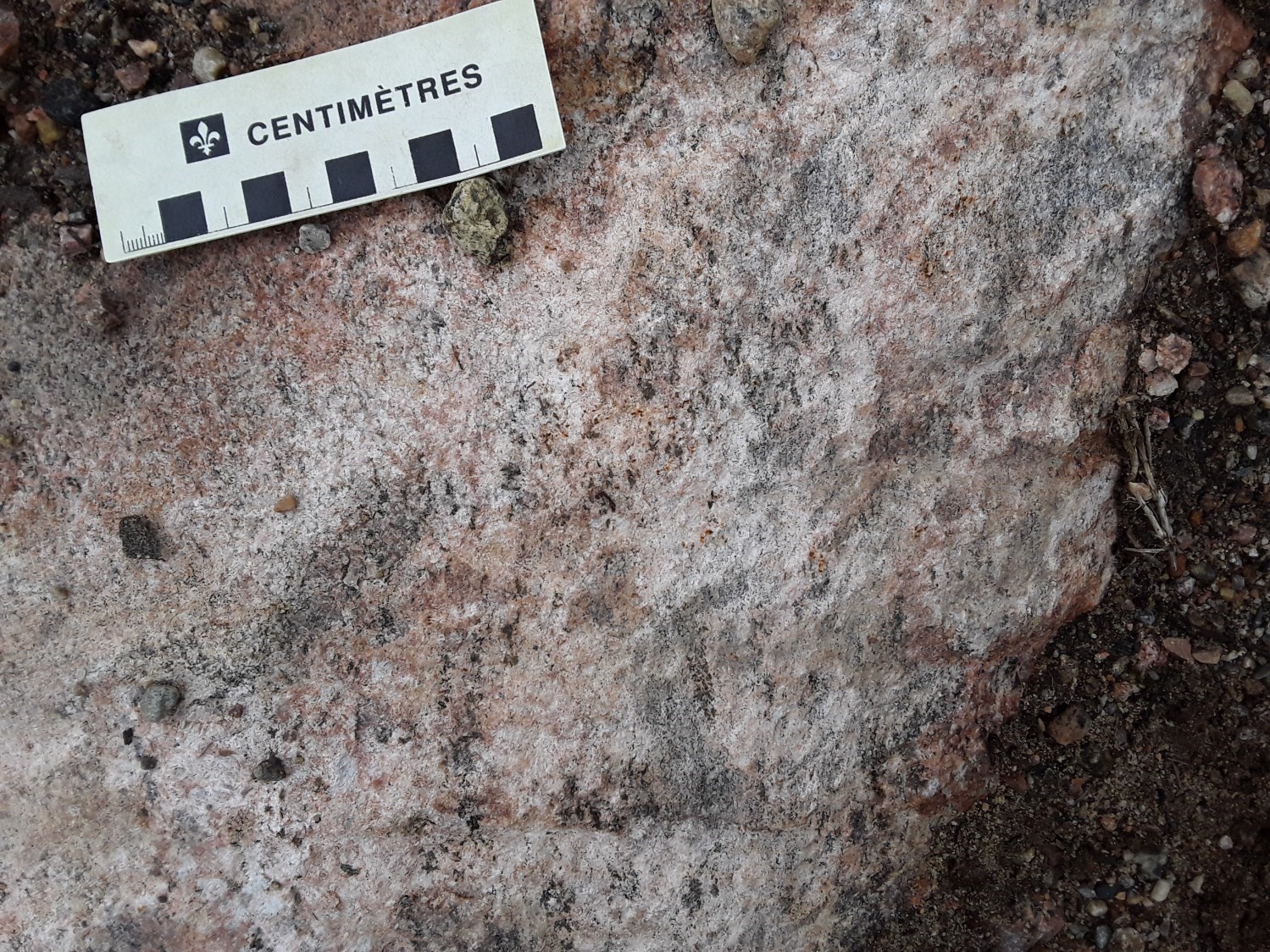 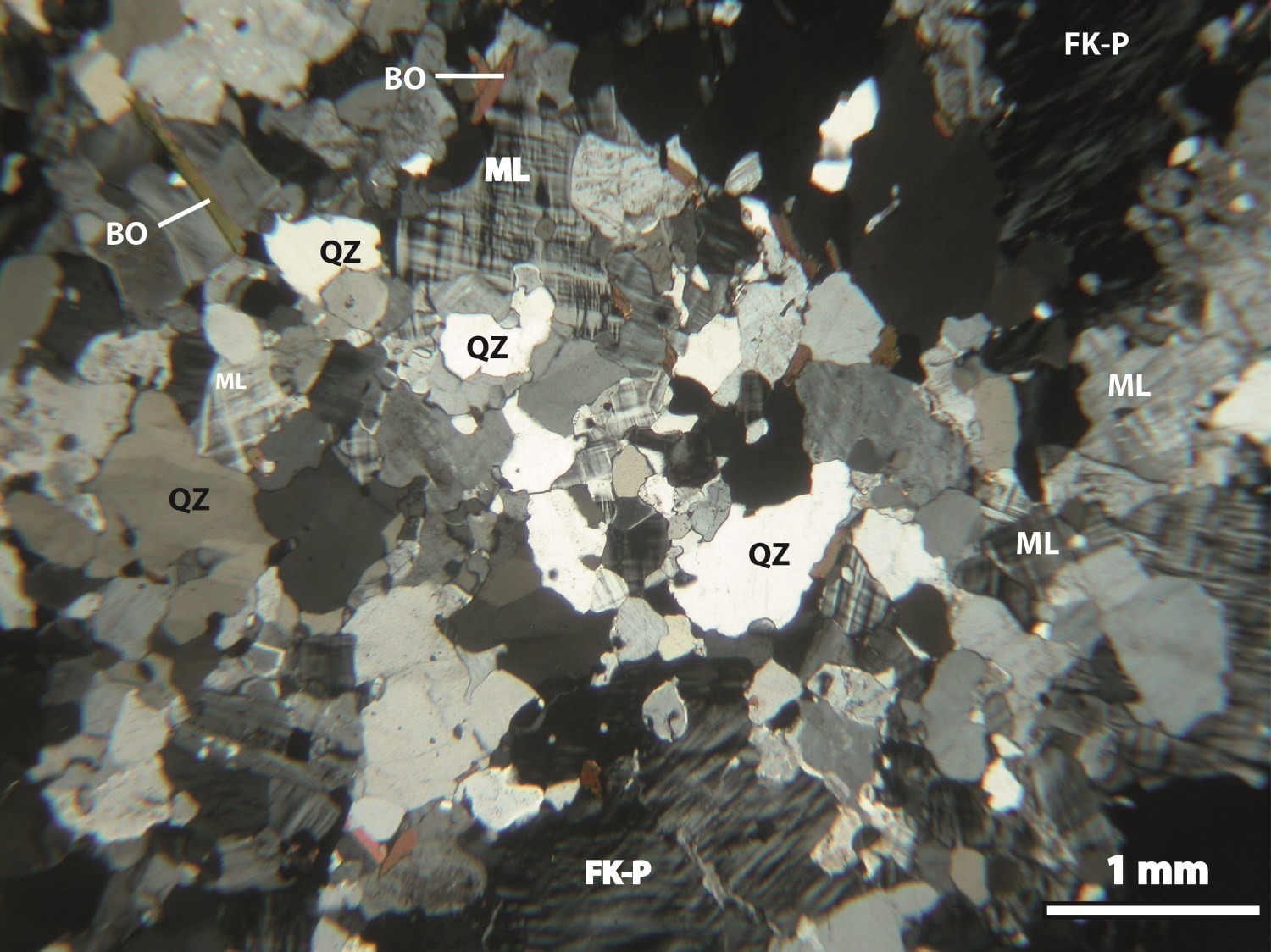 Alkali feldspar granite is pink to grey-pink in altered patina and fresh exposure (e.g. outcrop 2020-AM-118). It is fine to medium grained, granoblastic and slightly foliated. It is composed of quartz having undulatory extinction, perthitic and non-perthitic K-feldspar (microcline), plagioclase, biotite, magnetite, traces of orthopyroxene and accessory minerals (zircon, epidote, apatite). 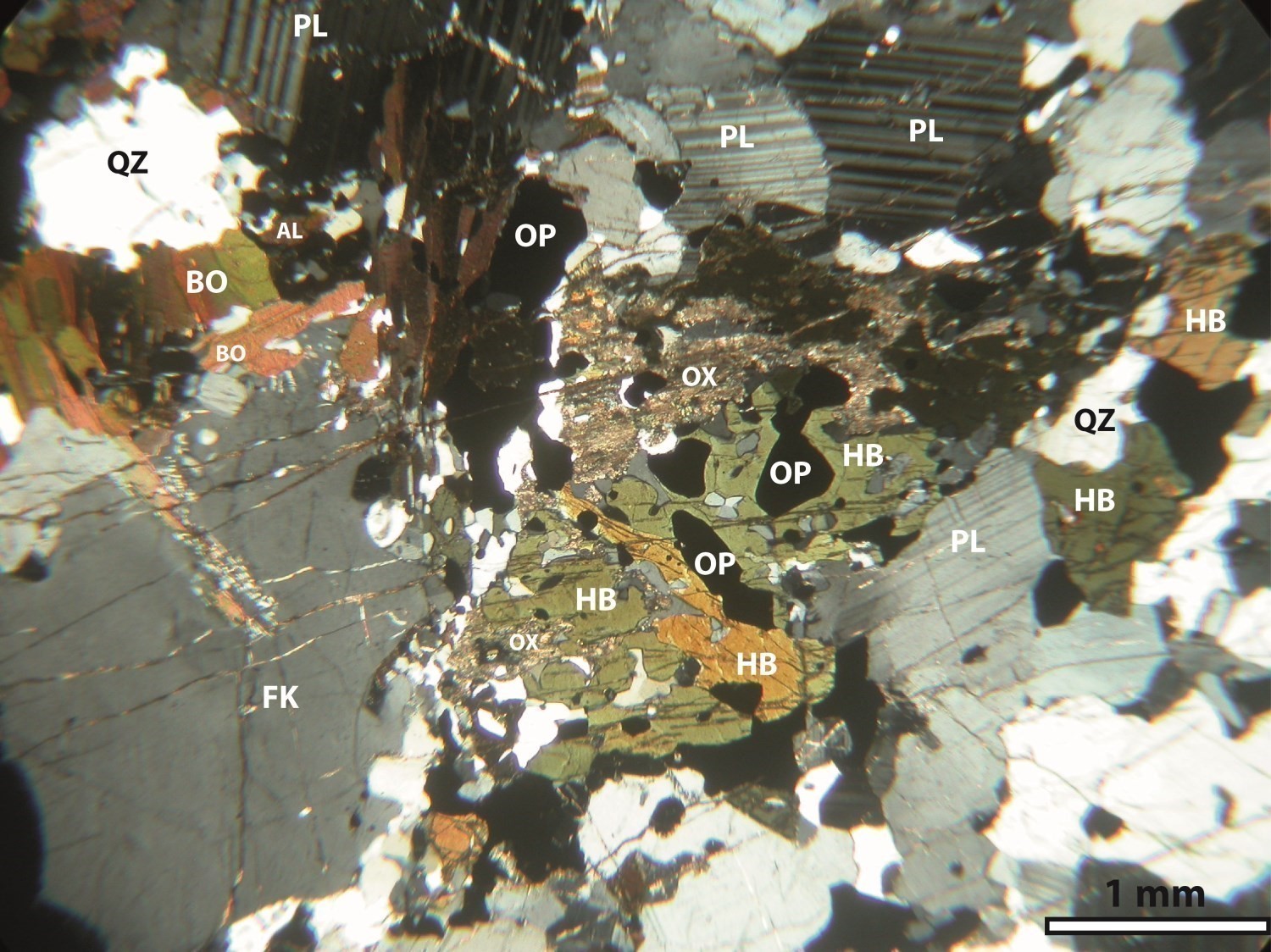 Quartz syenite (e.g. outcrop 2020-FT-3031) and hypersthene quartz syenite is pink-white in altered patina and greenish pink in fresh exposure. The rock is medium to coarse grained, K-feldspar (perthitic or not) and plagioclase (albite type, CIPW standard; Ab = 34%, An = 8%, Or = 26%) porphyraceous and foliated. Where present, phenocrystals can make up to 15% of the rock and be 1 cm to 3 cm long. Quartz syenite is magnetic. Mineralogy consists of polygonal quartz having undulatory extinction, altered orthopyroxene, myrmekitic plagioclase locally sericitized, biotite and green hornblende clusters, as well as euhedral allanite crystals. Accessory minerals include zircon, apatite and titanite. Carbonate veinlets fill microfractures of feldspar crystals. 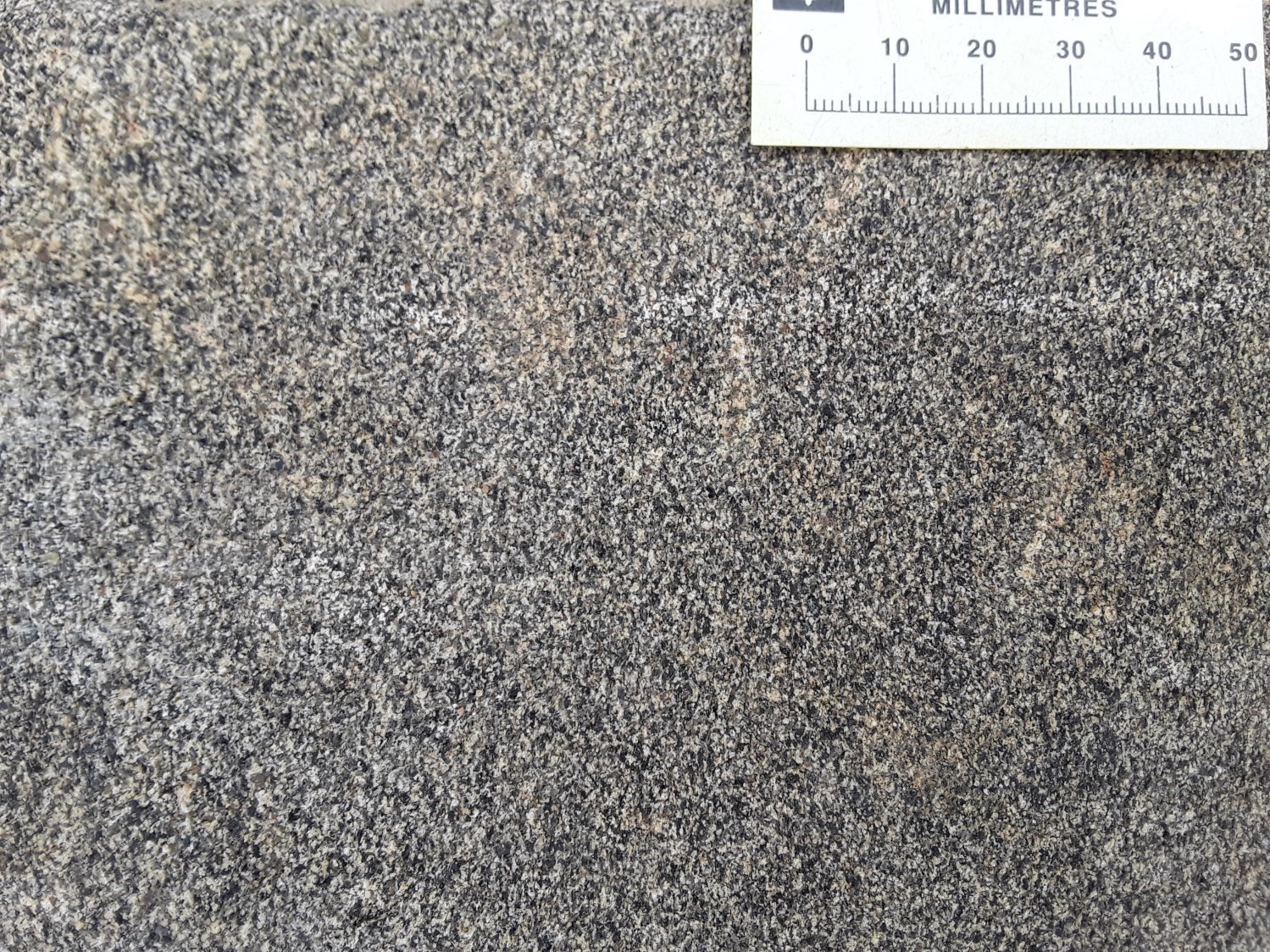 Syenogranite is generally brown-white in altered patina and grey-pink in fresh exposure. The rock is medium-grained, granoblastic and foliated. It is composed of quartz, plagioclase, K-feldspar, magnetite and ferromagnesian minerals (hornblende, biotite, clinopyroxene and orthopyroxene). Locally, syenogranite is rusty brown and contains up to 5% orthopyroxene (charnockite). A foliation is observed in the rock, which is marked by the elongated arrangement of ferromagnesian minerals. Syenogranite contains enclaves of well-foliated medium-grained granoblastic greenish gabbroic composition. The alignment of enclaves indicates the orientation of the syenogranite’s planar fabric.

Informal unit mPvet2 consists of the same lithologies as mPvet1. The distinction between the latter is based mainly on the abundance of the different phases that constitute them. Indeed, unit mPvet2 has a higher proportion of alkali feldspar syenitic and granitic phases than unit mPvet1. 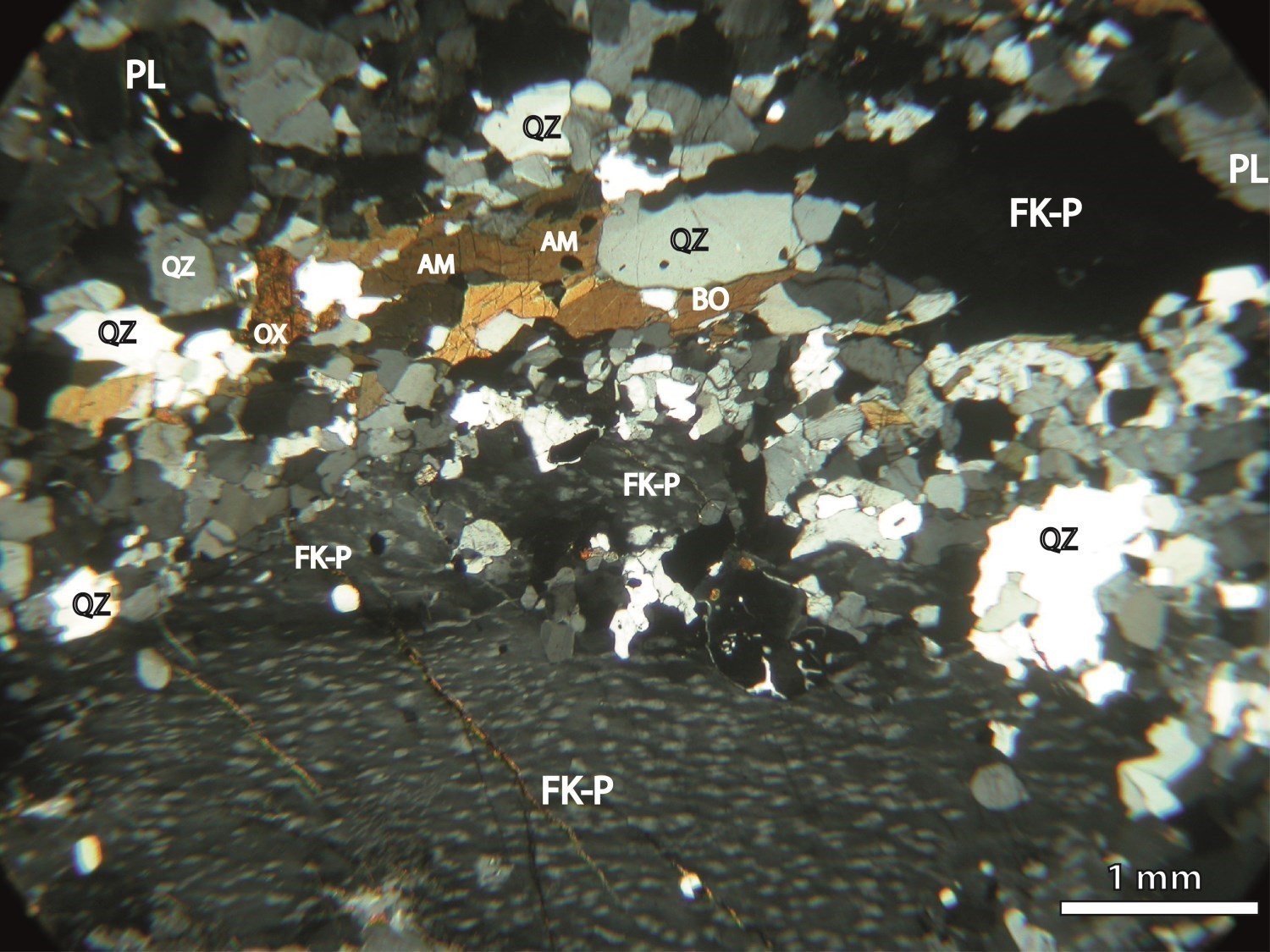 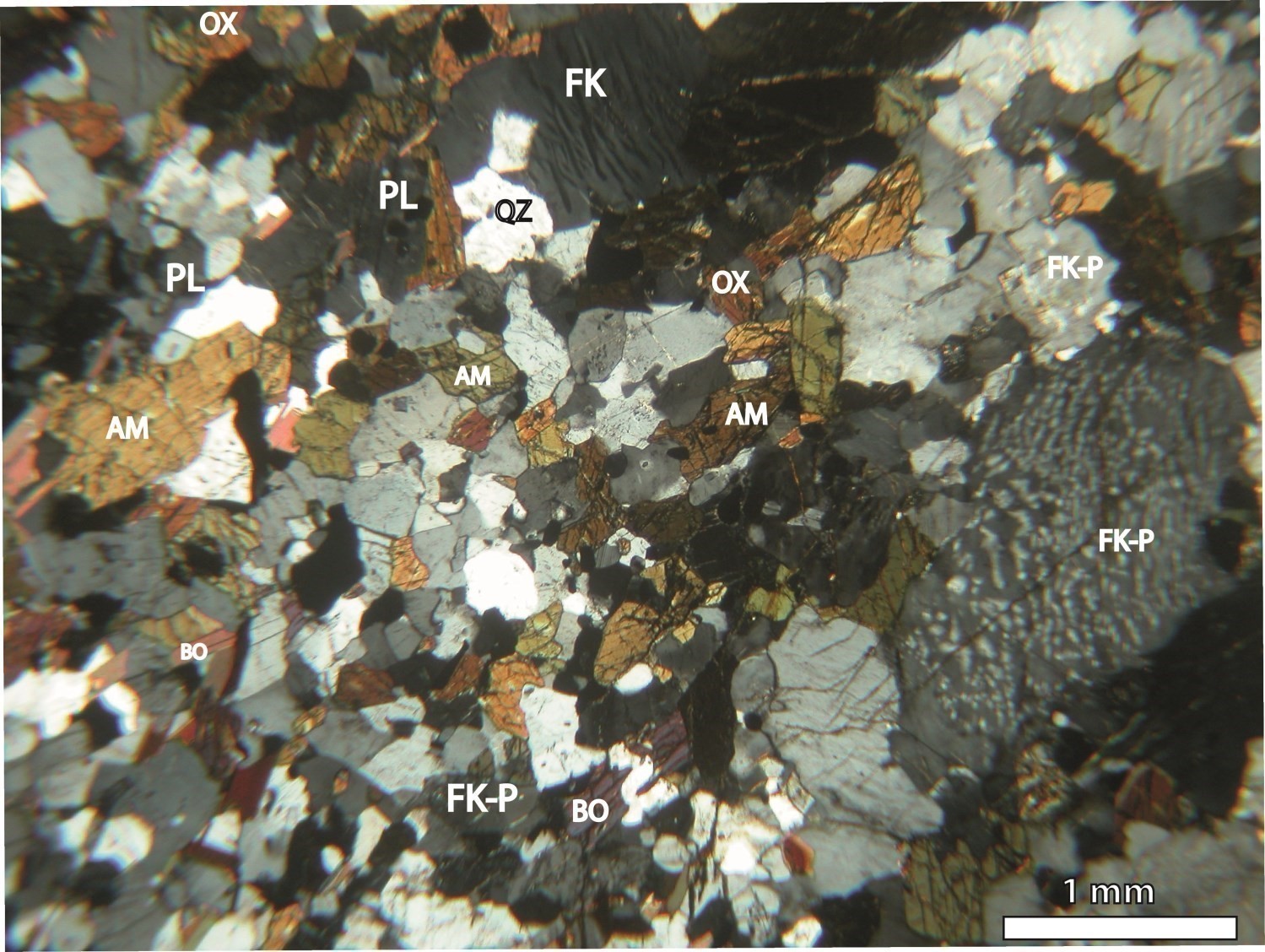 The syenitic phase of this unit is predominant. It consists of quartz syenite and hypersthene quartz syenite (e.g. outcrop 2020-FM-2118). Hypersthene syenite (e.g. outcrop 2020-FM-2115), locally quartz syenite, is white-beige to brownish in altered patina and greenish pink in fresh exposure. It is very magnetic (magnetic susceptibility of 55.35 USI), fine to medium grained and porphyraceous in places. Typical outcrops are mapped in the NW part of Perles Lake. K-feldspar phenocrystals (perthitic) make up 55% of the rock and are easily 4 cm long. The rock is also foliated and locally contains layers having compositional bedding parallel to the planar fabric and are enriched in biotite. In thin sections, the mineralogy consists of quartz, feldspar, orthopyroxene, biotite, accessory minerals (apatite, zircon, titanite) and opaque minerals (including magnetite).

Quartz syenite is represented by two syenites, one grey and the other pink. The first one is grey-black in altered patina and brown-black in fresh exposure. The second is generally pink in fresh and altered surfaces and intrudes the grey one as centimetric to metric dykes. Grey syenite is more enriched in ferromagnesian minerals (biotite, orthopyroxene, clinopyroxene) than the pink one. Both syenites are medium grained to K-feldspar porphyraceous, magnetic and mineralogically identical to those of unit mPvet1. 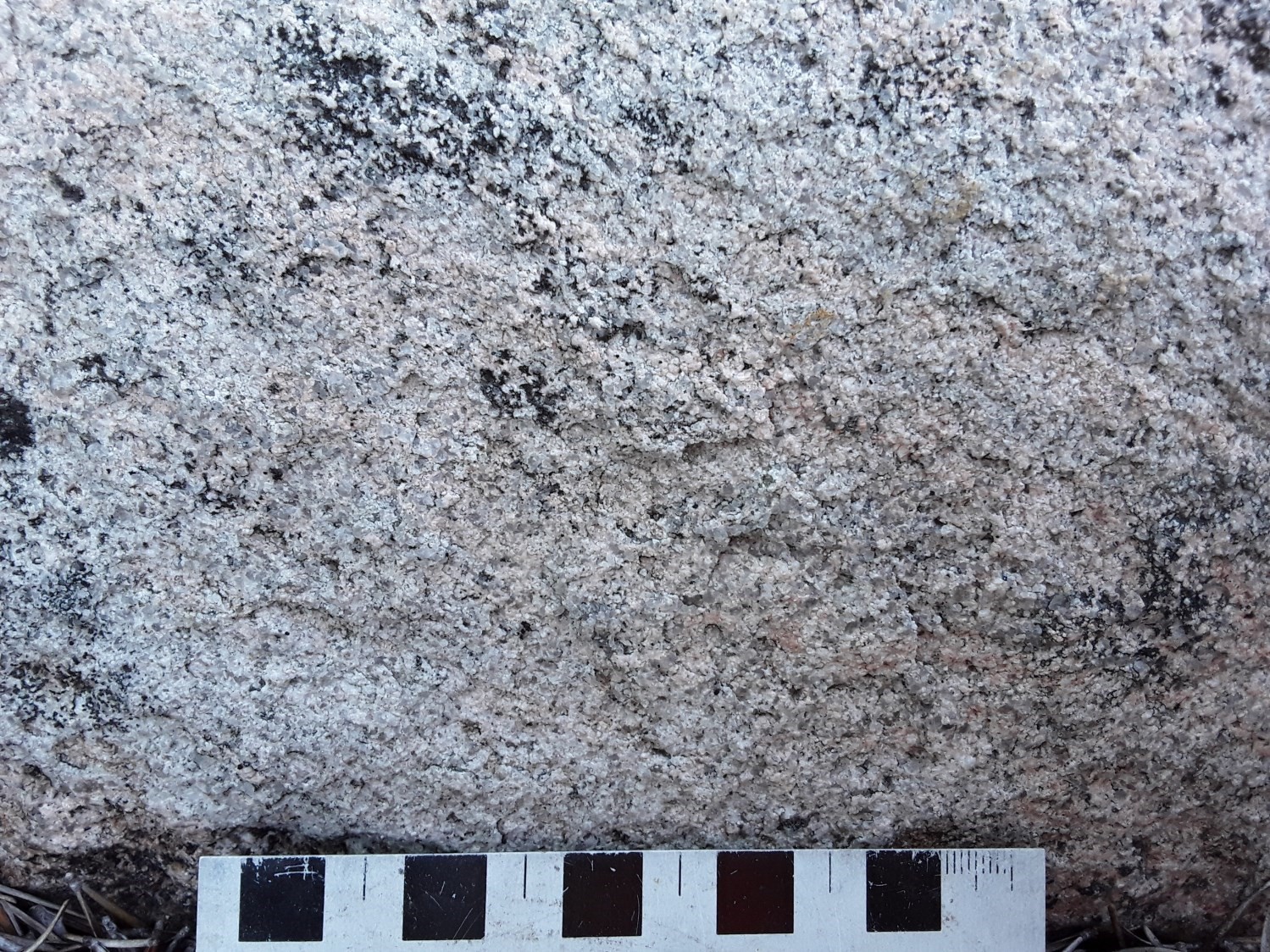 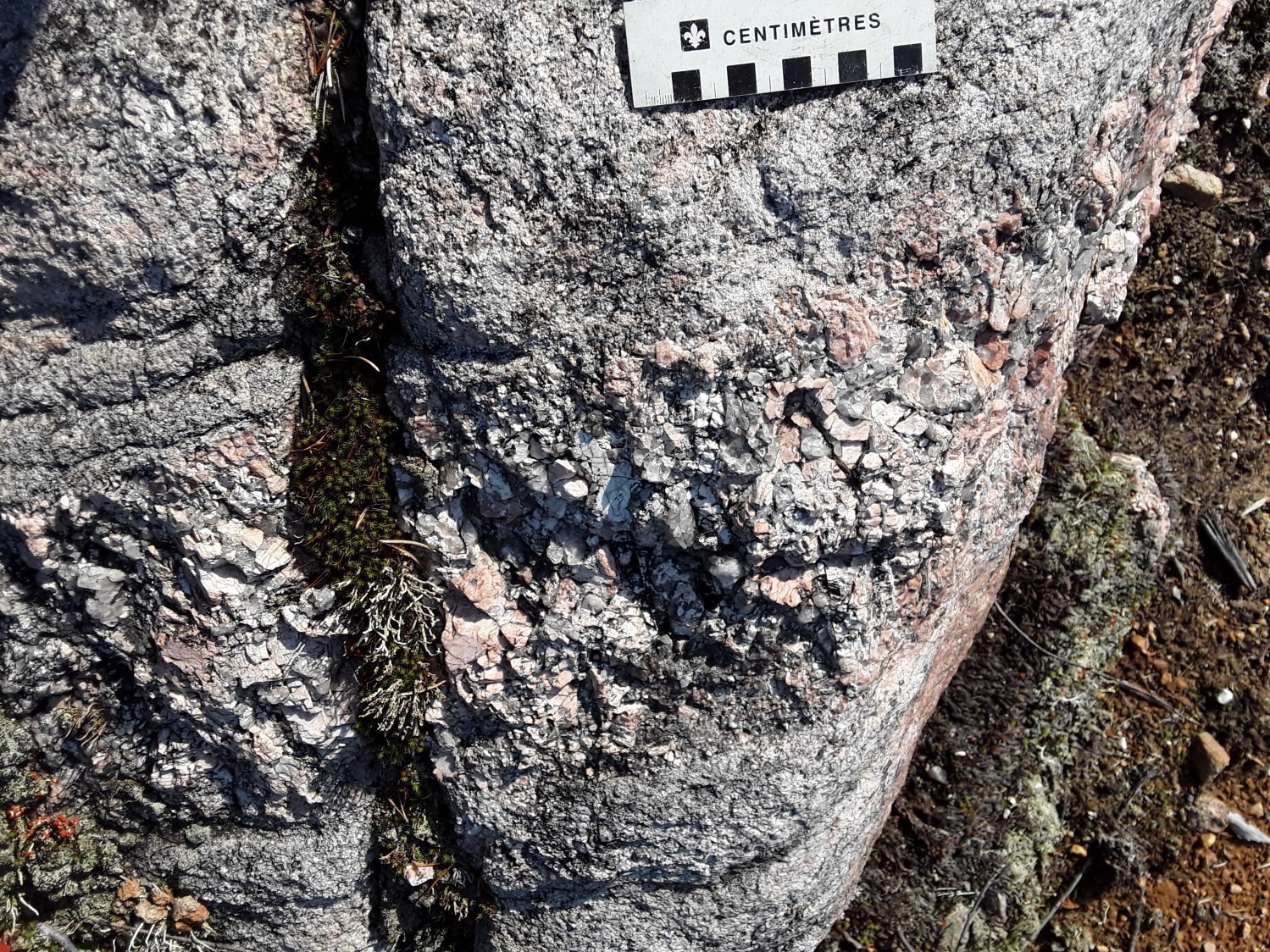 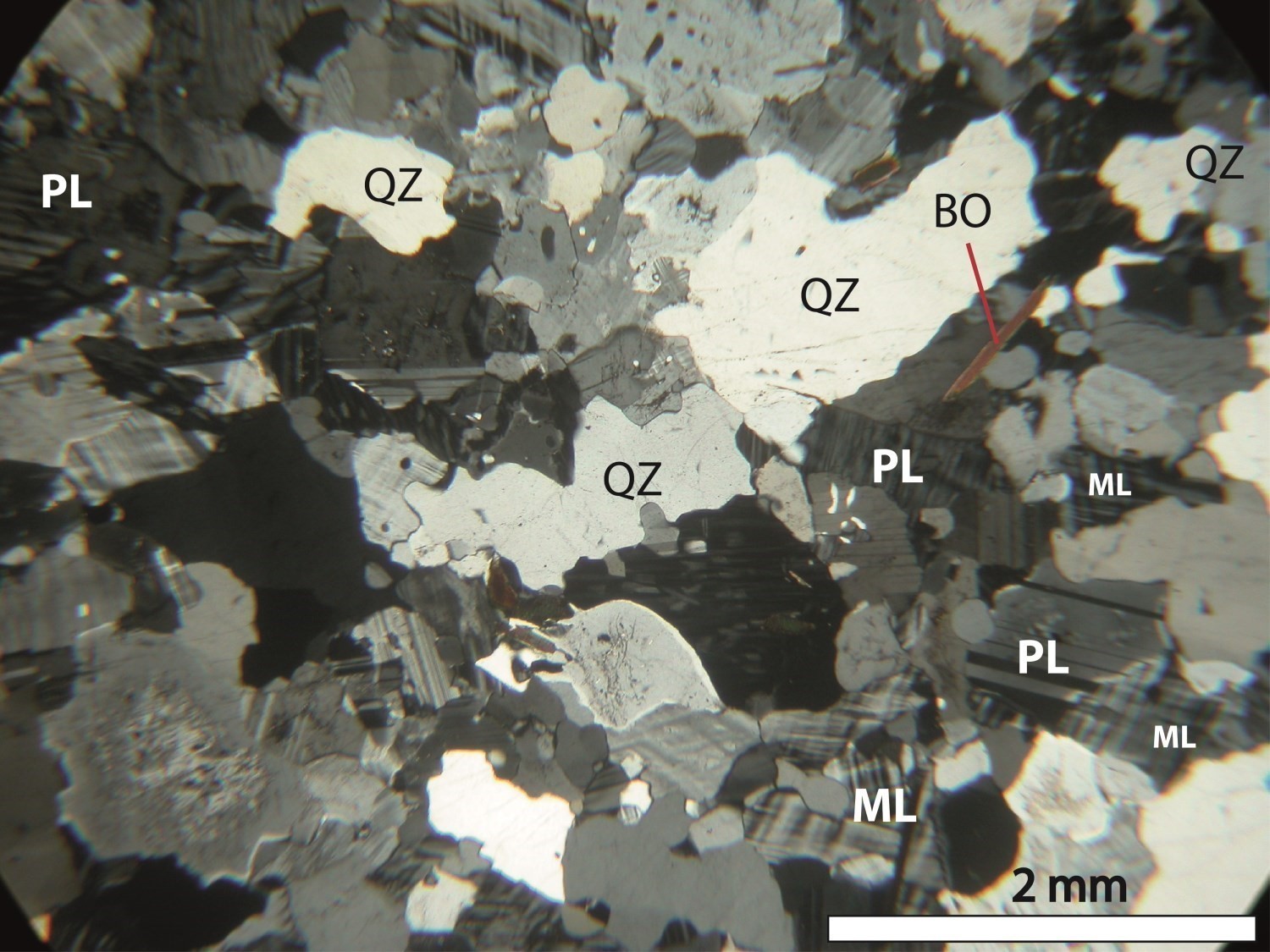 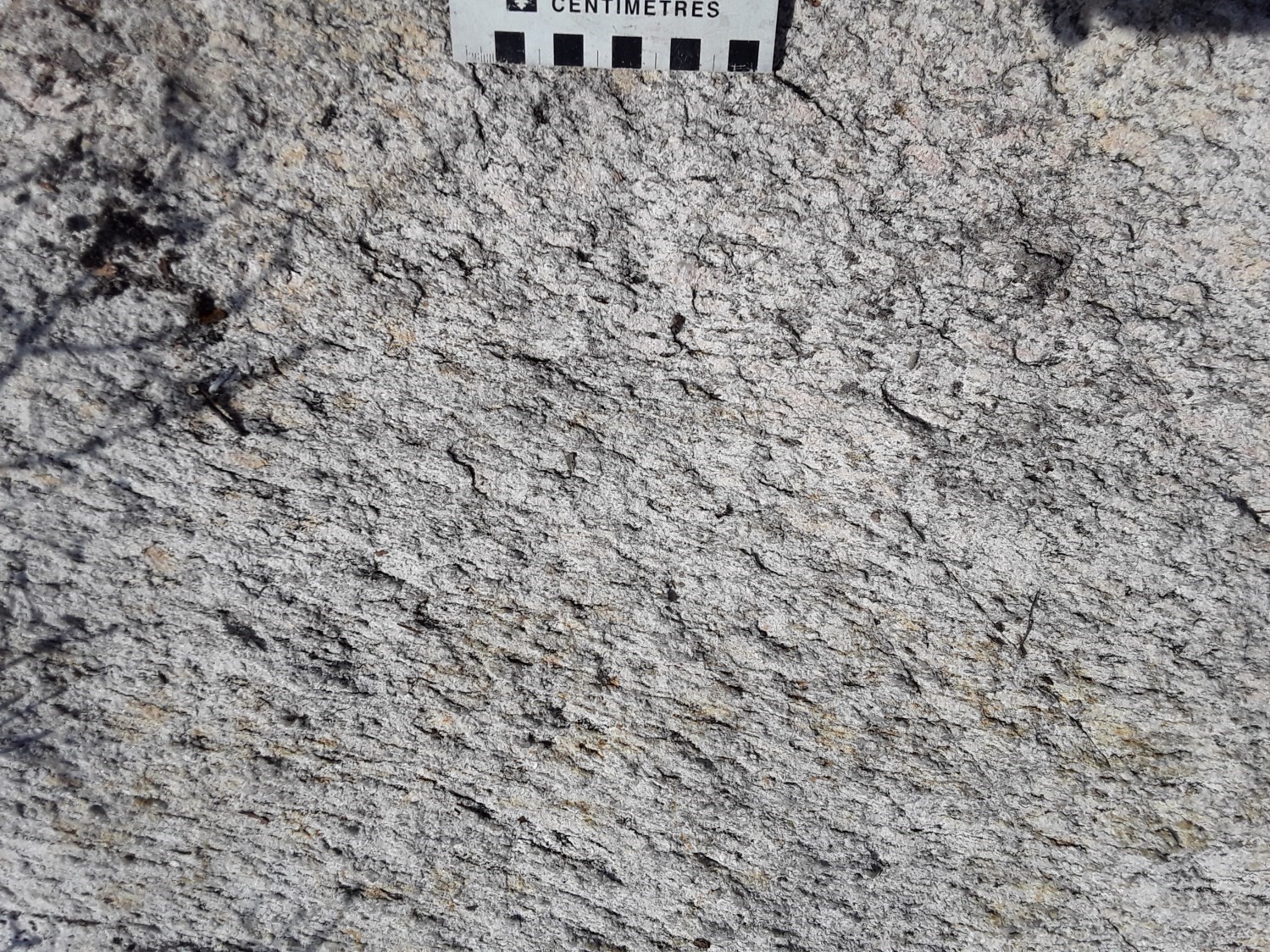 Alkali feldspar granite (e.g. outcrop 2020-FM-2104) is fine to medium grained, pink-grey in altered patina, white-pink in fresh exposure, moderately magnetic and foliated. It is intruded by pinkish granitic pegmatitic dykes. In thin sections, it contains quartz forming large elongated zones having undulatory extinction and a corroded edge. This is evidence of early metamorphism and deformation of the rock. Other minerals are plagioclase, K-feldspar displaying twining reminiscent of a Scottish kilt (microcline) and biotite in small amounts. Accessory minerals are epidote, apatite and zircon. Locally, alkali feldspar granite may be gneissic and porphyroclastic at faults, such as the normal fault cutting unit mPvet2 (e.g. outcrop 2020-FM-2108). Syenogranite is medium to coarse grained, white-beige in altered patina, grey-pink in fresh exposure, magnetic and foliated. Locally, it is abundantly intruded by whitish pegmatitic veins, veinlets and dykes of granitic composition. These injections give it the deceptive appearance of a migmatite (outcrop 2020-AM-019). This granite has variable contents of plagioclase, K-feldspar, biotite and magnetite. K-feldspar (microcline) is generally perthitic. Biotite and hornblende are mostly observed as grain clusters. Accessory minerals are epidote, apatite and zircon, accompanied by opaque minerals. 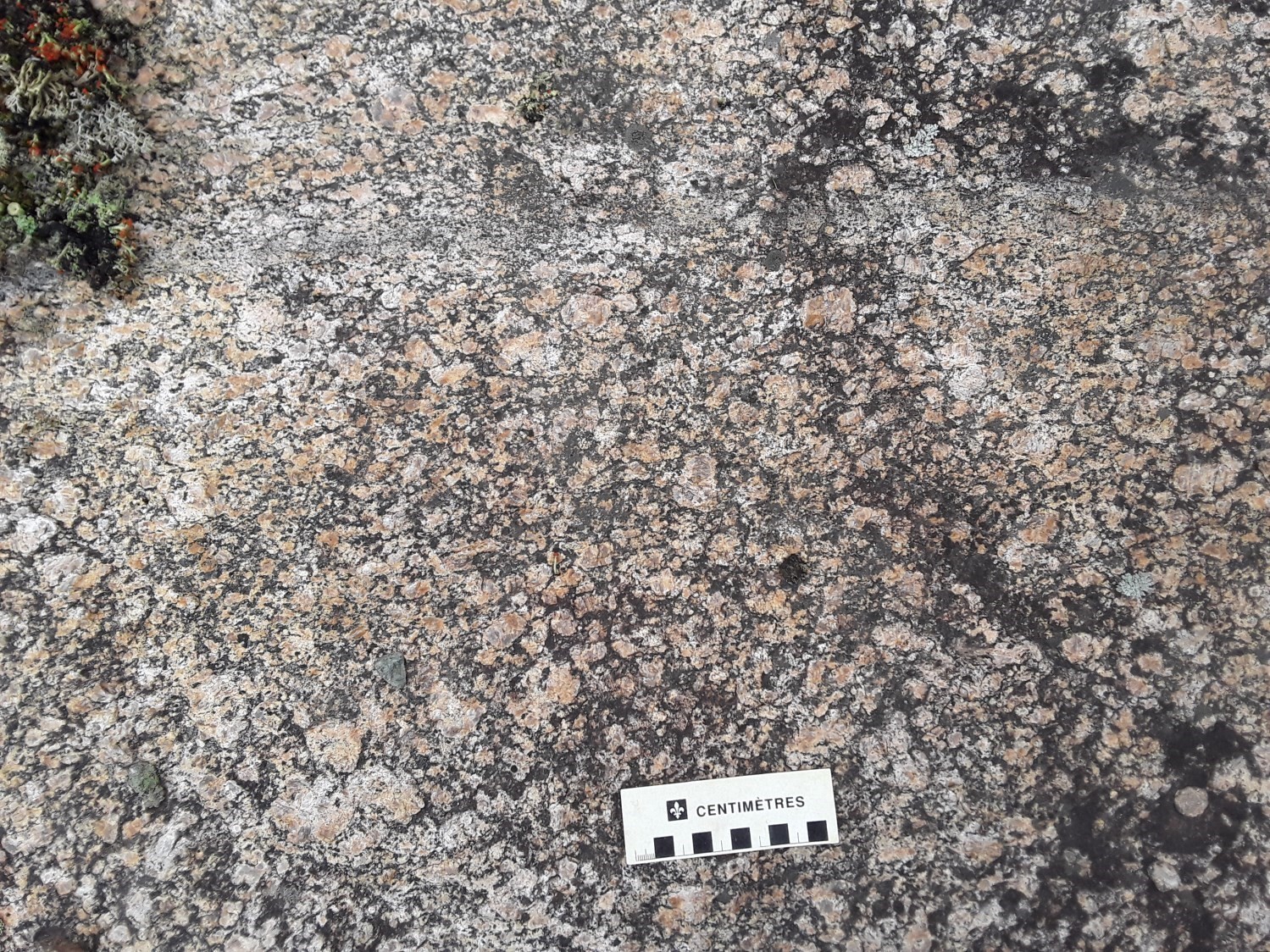 Mangerite (hypersthene monzonite) was mapped at several locations in unit mPvet2. The typical outcrop (2020-AM-113) is located at the contact between units mPvet1 and mPvet2. It consists of brownish mangerite in altered patina and white-green in fresh exposure. It is magnetic and characterized by a K-feldspar and plagioclase porphyraceous texture. Phenocrystals form up to 60% of the rock and are ≤5 cm long. Clinopyroxene is present in the rock, usually associated with orthopyroxene. The rock contains millimetric layers enriched in ferromagnesian minerals (biotite, amphibole, pyroxene) and in magnetite which are arranged parallel to the planar fabric. One outcrop of this mangerite contains enclaves of foliated fine to medium grained gabbronorite (outcrop 2020-FM-2040), while another is characterized by folding and rock deformation (2020-FM-2106). 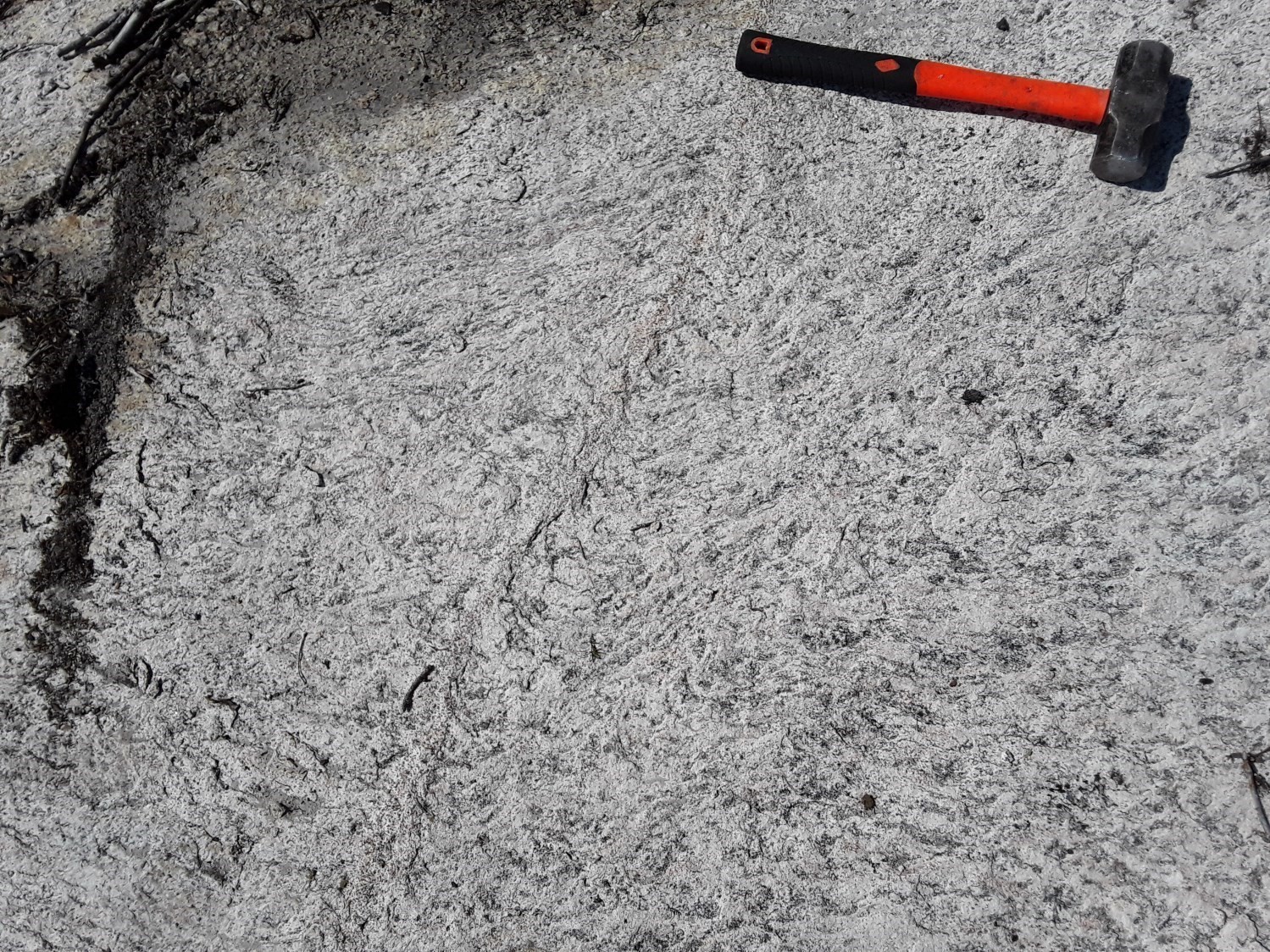 Charnockite (hypersthene granite, typical outcrop 2020-FM-2110) is grey-white in altered patina and white-pink in fresh exposure. The rock is fine to medium grained and foliated. It is composed of quartz, generally stretched, K-feldspar, plagioclase, orthopyroxene, biotite and magnetite. Intense deformation characterizes this charnockite, especially on outcrops mapped at the contact of the normal fault cutting unit mPvet2.

The Vertu Plutonic Suite forms a batholith consisting of two units (mPvet1, mPvet2). It is present in mapped sheet 32H02 and continues in sheet 32H07. In sheet 32H02, unit mPvet1 occupies 16 km2 and is elongated along a N-S axis. Unit mPvet2 is elliptical in shape, oriented NNW-SSE, and occupies an area of ~60 km2. It is crossed by several normal and reverse faults.