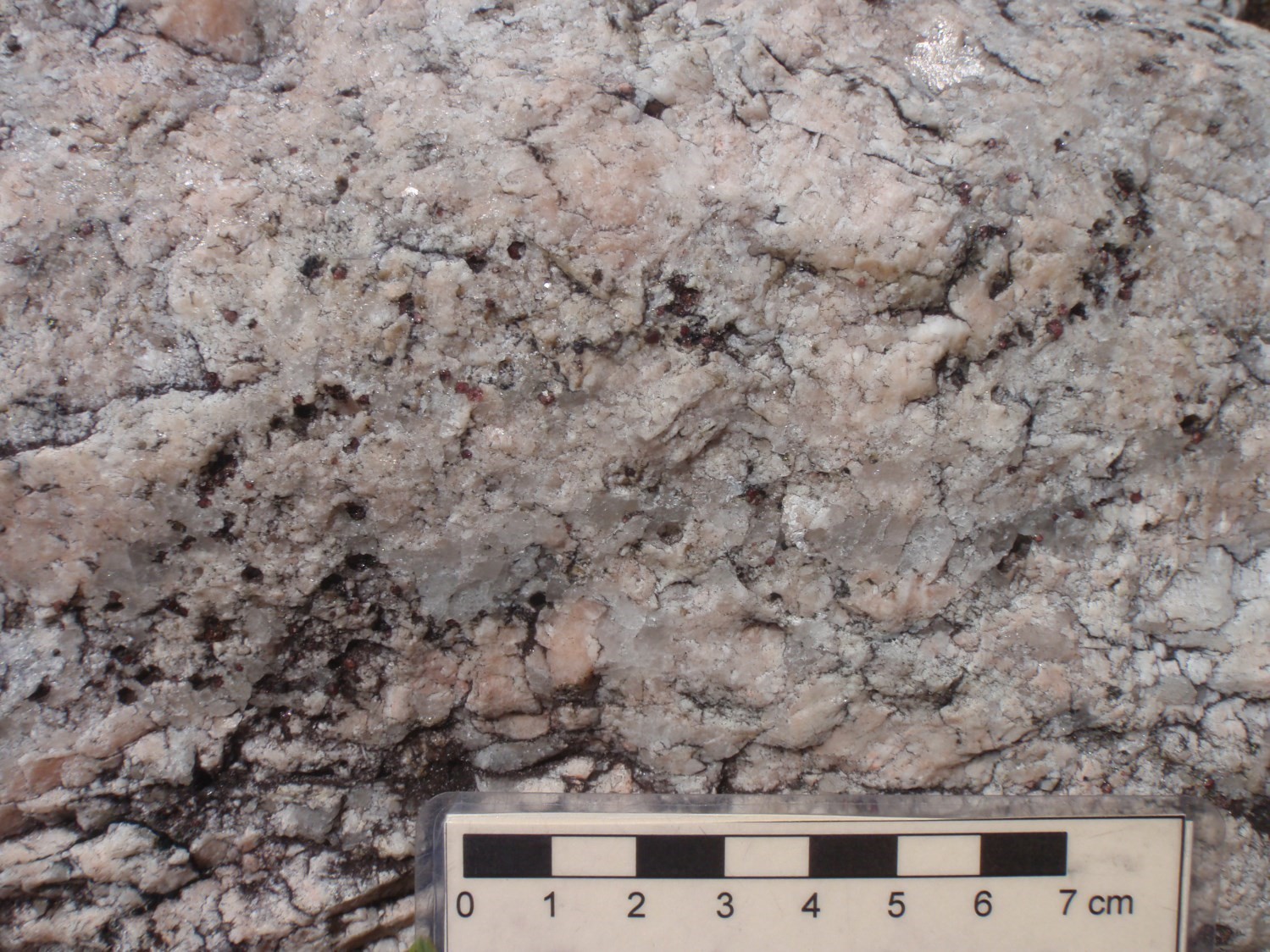 The first descriptions of the rocks assigned to the Mezières Suite were drawn from the works of Remick (1963) and Gillain (1965). The name “Mezières Suite”, whose namesake lake is located in the NTS sheet 32N06, was introduced by Bandyayera and Daoudene (2018) following the summer 2017 geological mapping work in the La Sicotière Lake area (sheet 32N08) to group white pegmatites spatially associated with sedimentary sequences of the Rupert Complex and Voirdye Formation (Bandyayera and Daoudene, 2018; Bandyayera and Caron-Côté, 2019). 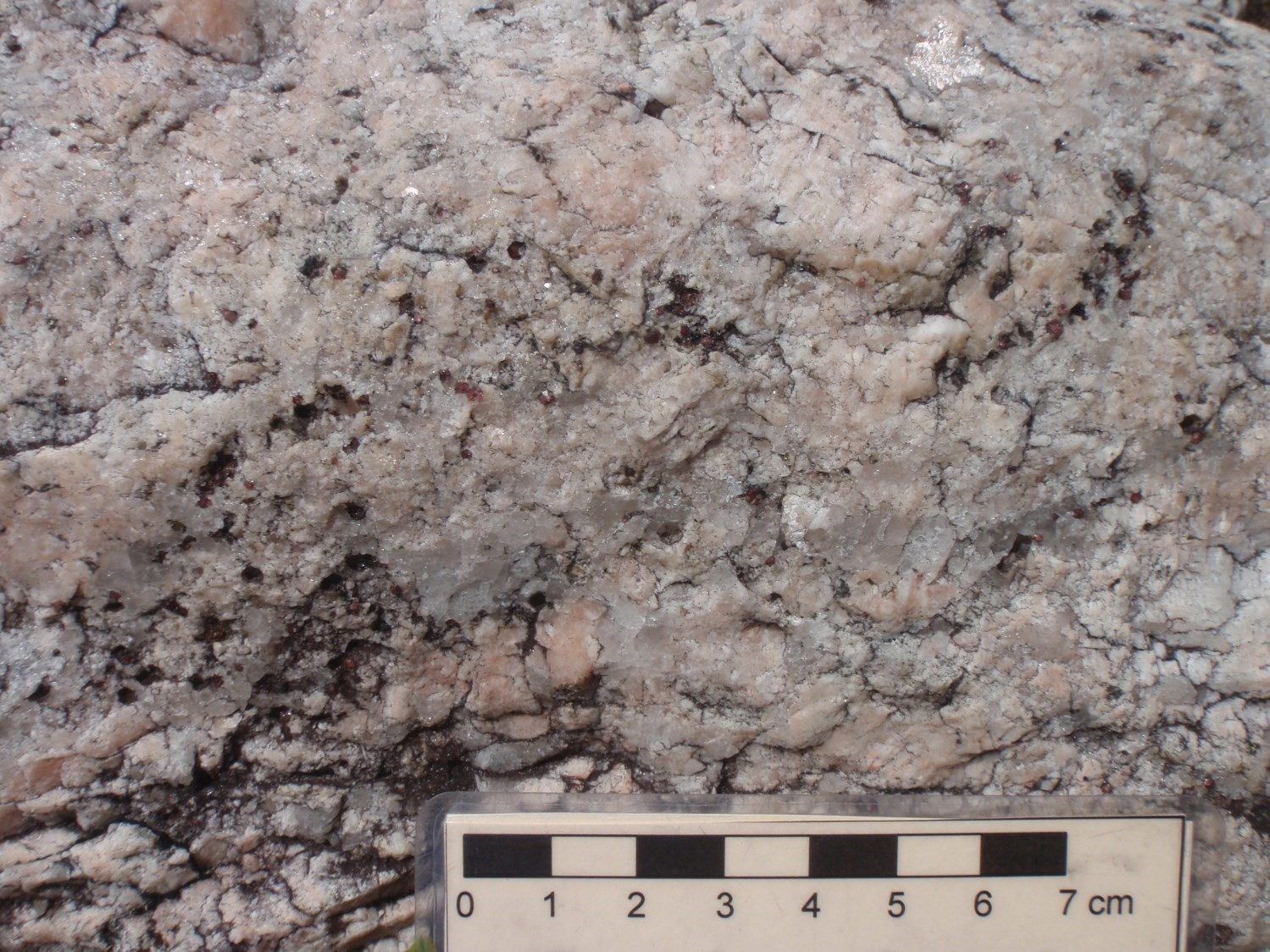 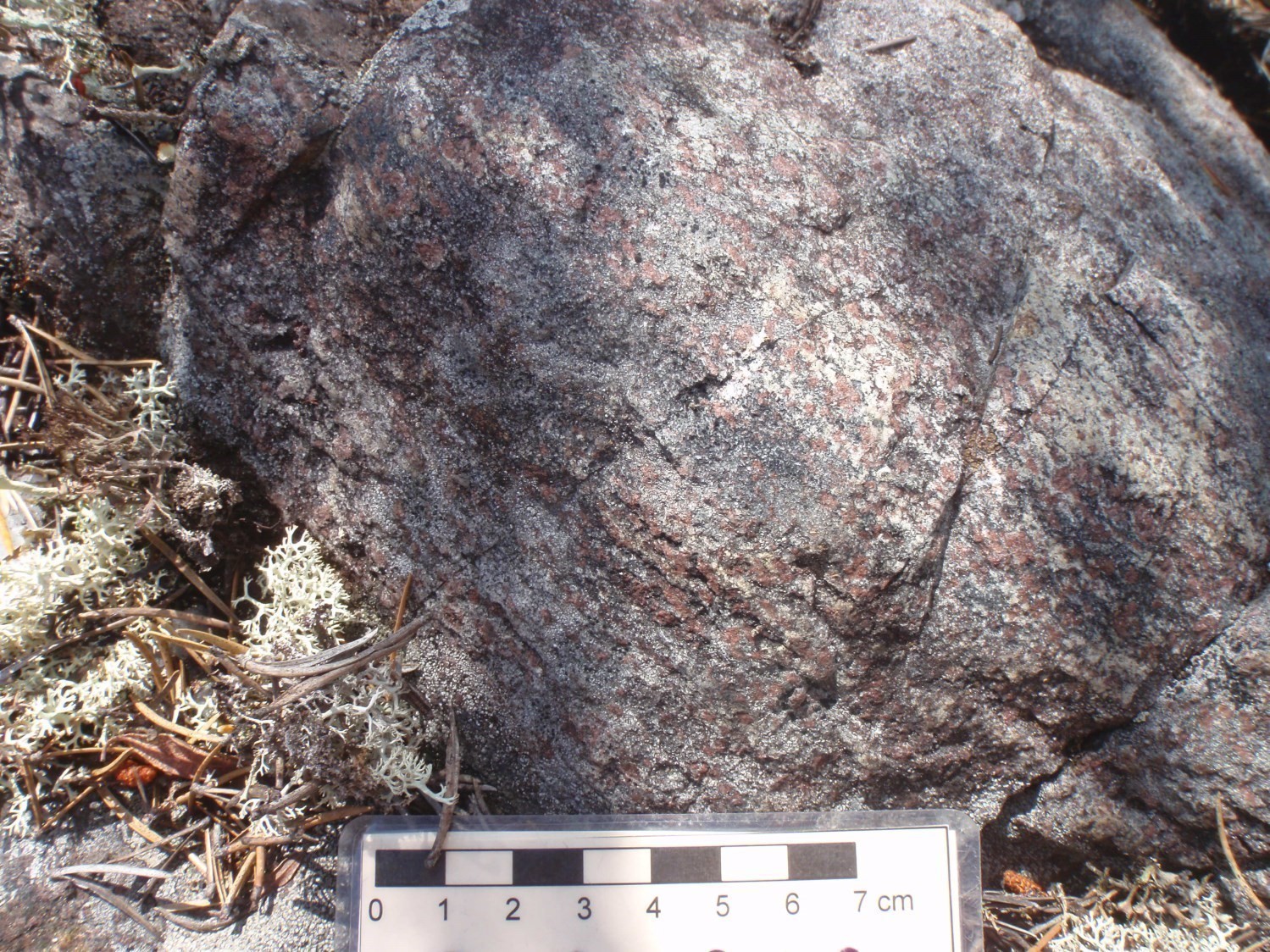 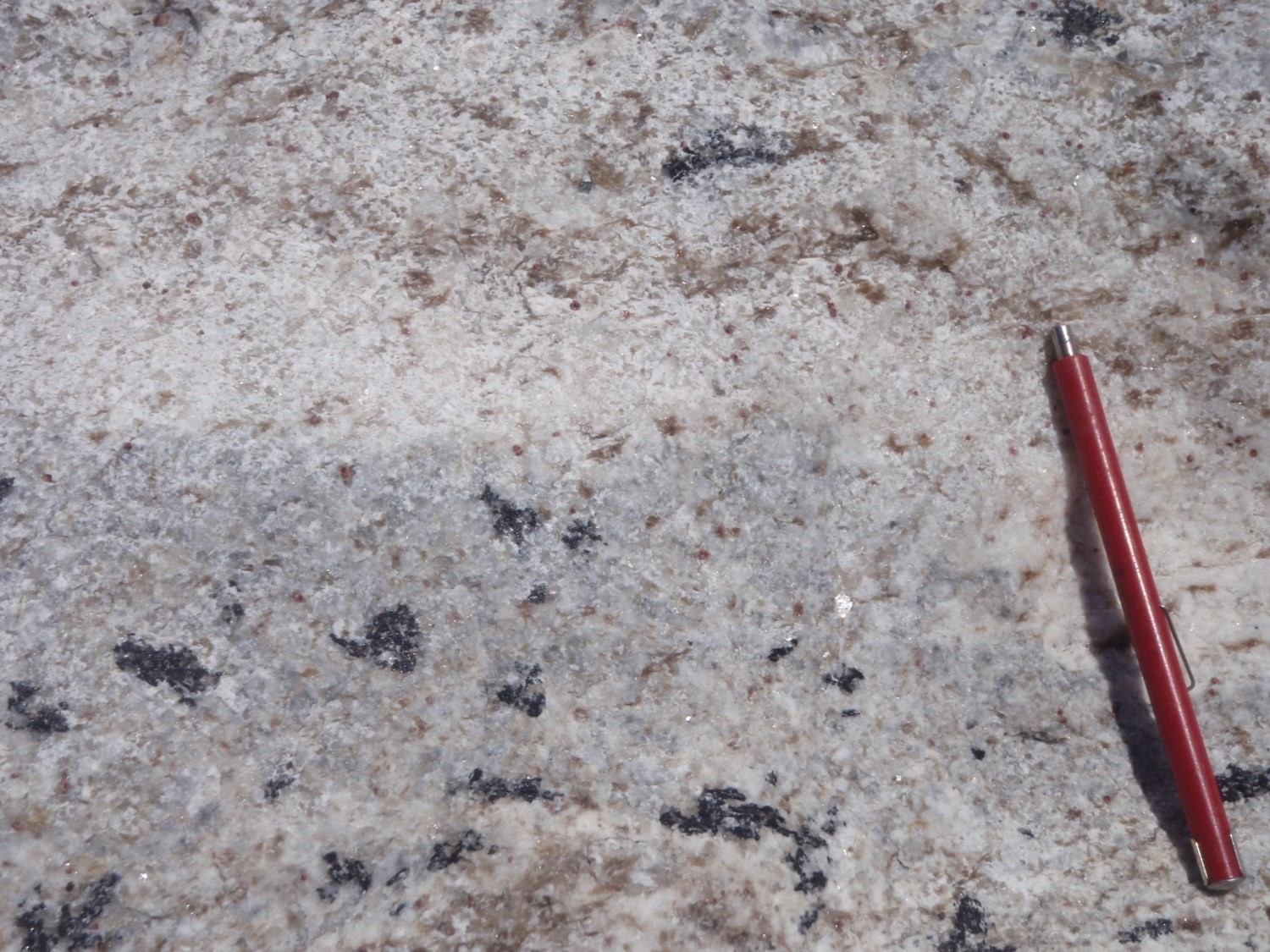 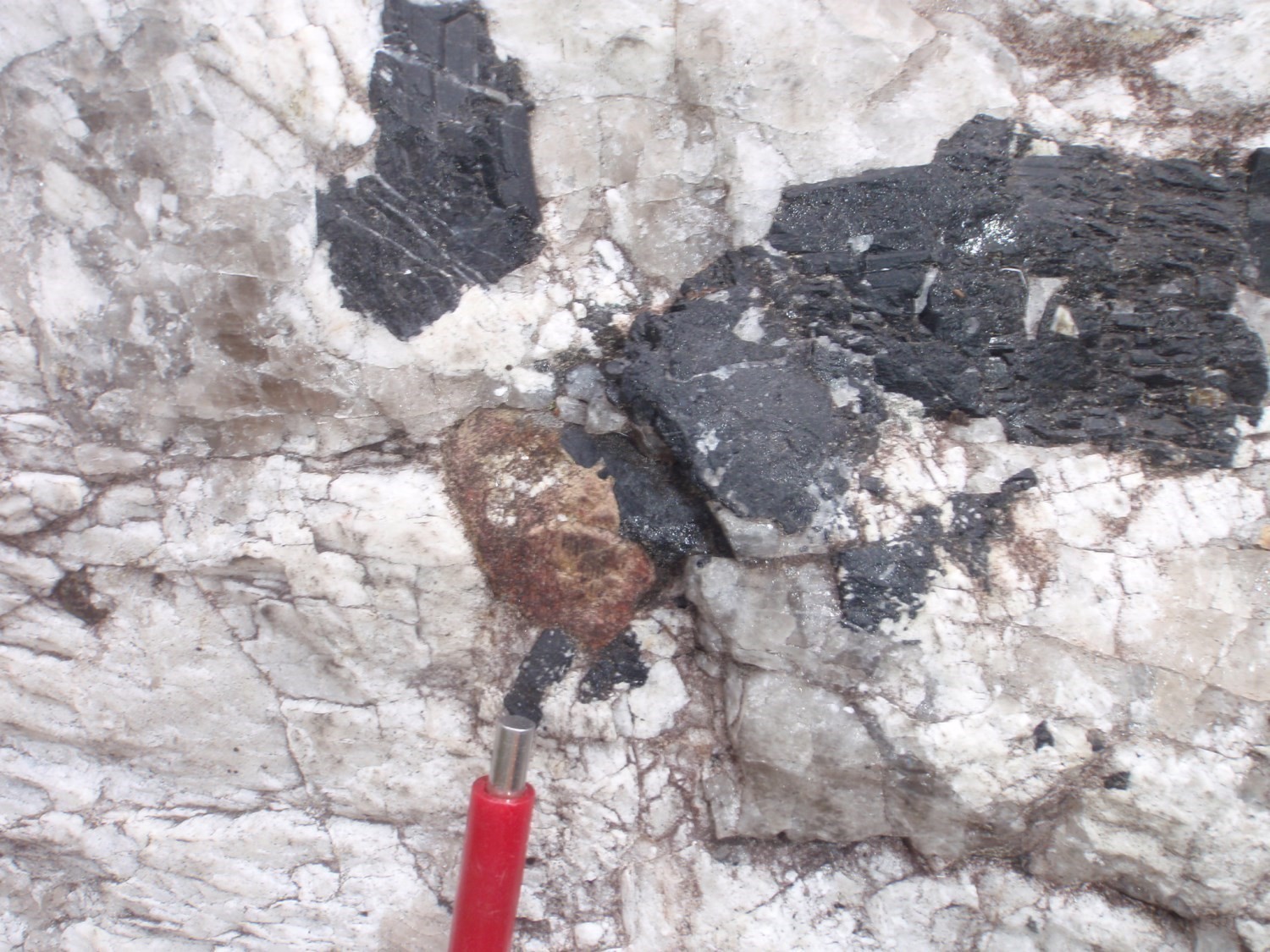 The Mezières Suite consists of white biotite ± garnet ± muscovite granitic pegmatite, locally pinkish beige. The rock is massive to locally foliated and heterogranular. In places, metric masses of white pegmatite show well-developed magmatic bedding. In large K-feldspar crystals﻿, the typical graphic texture is characterized by the presence of quartz laths oriented parallel to cleavage. Close to the Rupert Complex, this unit is distinguished by the rarity of tourmaline, which ranges in concentration from 0 to 5% and locally up to 10%. Bandyayera and Caron-Côté (2019), however, have shown that in pegmatites associated with the Voirdye Formation, tourmaline is ubiquitous and accounts for 2 to 20% of the rock, or even 30% locally. The rock also contains biotite (up to 10%), muscovite (2 to 15%, locally up to 5%), garnet (1-15%) and magnetite grains disseminated or in centimetric clusters. Accessory minerals are apatite and zircon.

The Mezières Suite contains 2 to 20% metric to decametric paragneiss enclaves, which are generally boudinaged and are locally ﻿comparable to partially digested restites. Contacts between enclaves and the pegmatic host rock usually show a biotite rim. The Mezières Suite is interpreted as the final product of partial melting of metasedimentary rocks.

From a geochemical point of view, rocks of the Mezières Suite are S-type, peraluminous, of calcic to calc-alkaline affinity.

The Mezières Suite is composed of several intrusions of varying sizes scattered over an area about 200 km long by 100 km wide.

A sample from an intrusive pegmatitic biotite granite in migmatitized paragneiss from the Nemiscau Subprovince on the Broadback River shore (sheet 32N03) yielded an age of intrusion of 2672 ±2 Ma (Davis et al., 1995). Another sample located on the La Marte River shores (sheet 32N08) taken in situ in a diatexite derived from partial melting of a garnet paragneiss yielded a crystallization age of 2691 ±5.9 Ma (David, personal communication). This S-type diatexite is interpreted as contemporaneous and genetically associated with garnet-muscovite pegmatites of the Mezières Suite. These data indicate that pegmatites in the Mezières Suite are polyphased intrusions emplaced between 2691 and 2672 Ma.

The Mezières Suite groups white pegmatites that intrude into metasedimentary sequences of the Rupert Complex and Voirdye Formation. These intrusions are subparallel or oblique to foliation planes. The white pegmatite that cuts the Lac des Montagnes Group is also part of this unit.