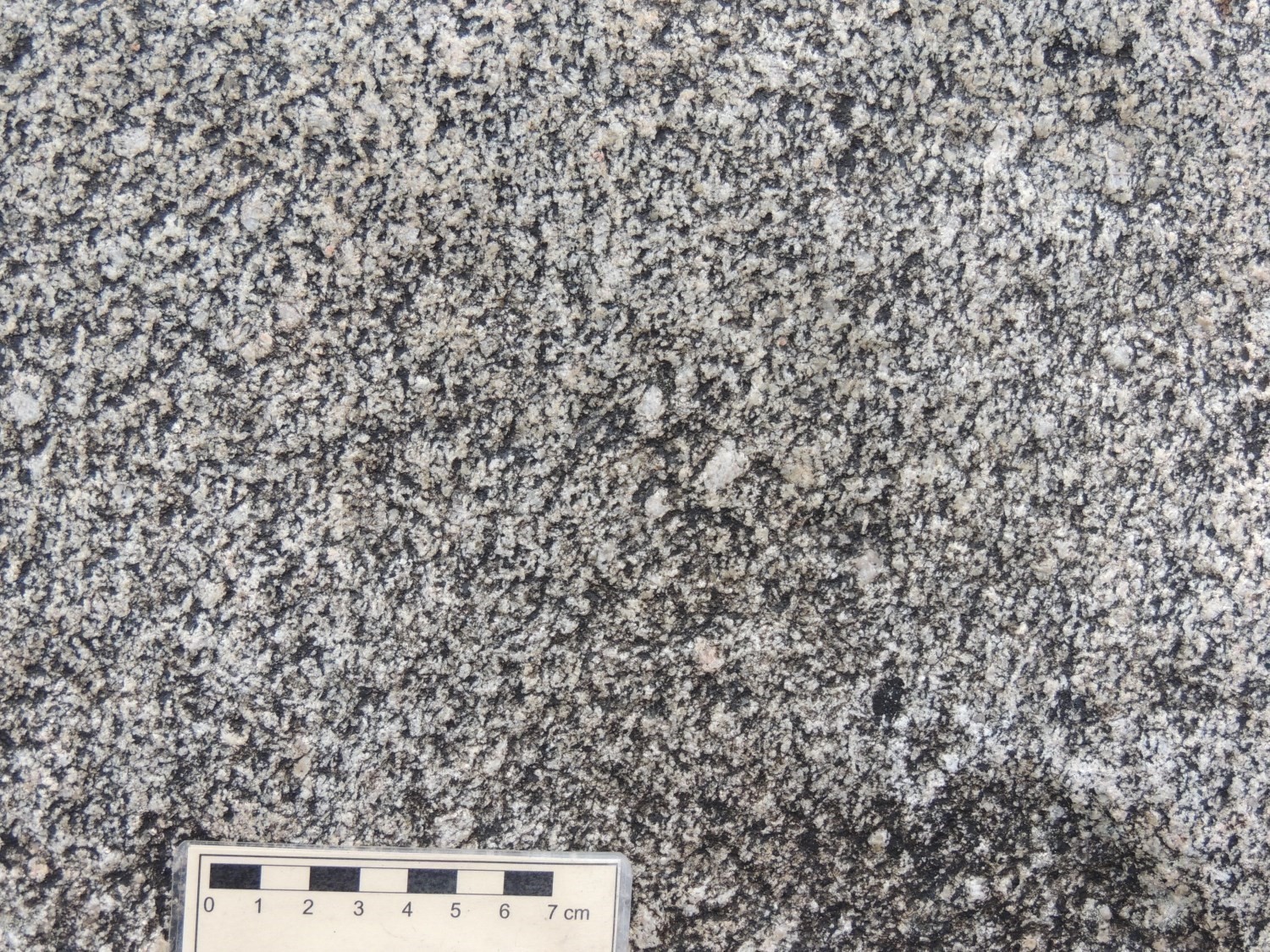 The Frégate Pluton was defined during the 2012 geological mapping work to designate an intrusion on the shores and islands of Frégate Lake (Goutier et al., in preparation). This pluton was dated by U-Pb on zircon (Augland et al., 2016). Similar intrusions of the Opinaca Subprovince in sheets 33G had previously been associated with the Bezier Suite. Subsequently, the Frégate Pluton and similar intrusions cutting only the Opinaca Subprovince were reassigned to the Féron Suite, while the Bezier Suite was reserved for intrusions cutting the La Grande Subprovince. In the first 1:50 000-scale version of the geological map of sheet 33G03 (MNRF, 2010), the Frégate Pluton’s westward extension was identified by plagioclase porphyritic quartz diorite intrusions. Subsequent stainings and thin sections revealed that phenocrystals were K-feldspar similar to those found in the Frégate Pluton. 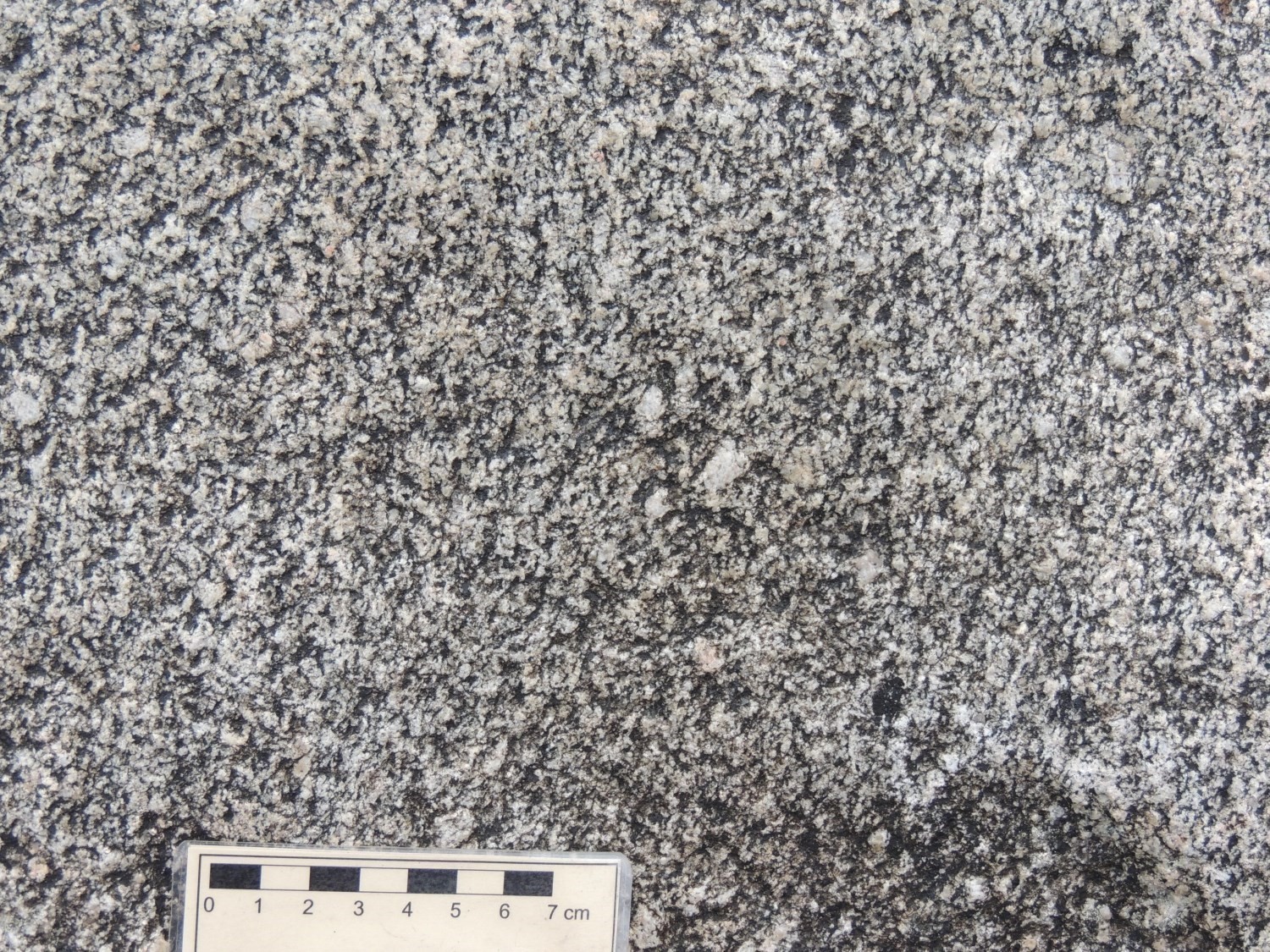 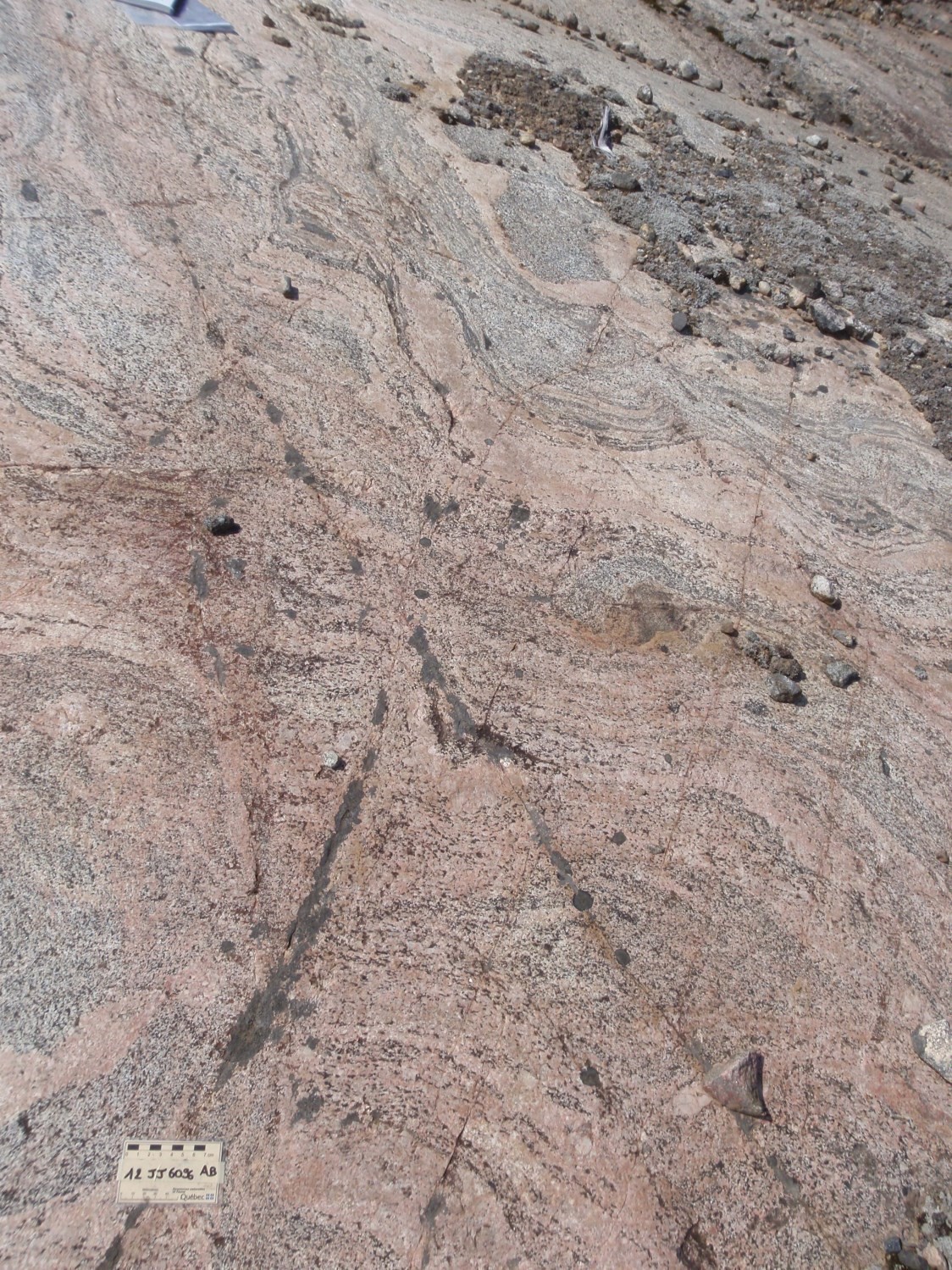 The Frégate Pluton composition ranges from intermediate to felsic (quartz monzodiorite, monzonite, monzodiorite, quartz monzonite and granodiorite). Lithologies are commonly K-feldspar porphyritic and intruded by granite. The eastern part of the pluton is dominated by plagioclase-rich lithologies (quartz monzodiorite), while the western part is dominated by quartz monzonite. The intensity of deformation visible in outcrops varies from low to medium and a mineral foliation can generally be measured. In the SE portion of the intrusion, outcrops have a tectonic lineation well-defined by the alignment of mafic minerals (biotite and hornblende). 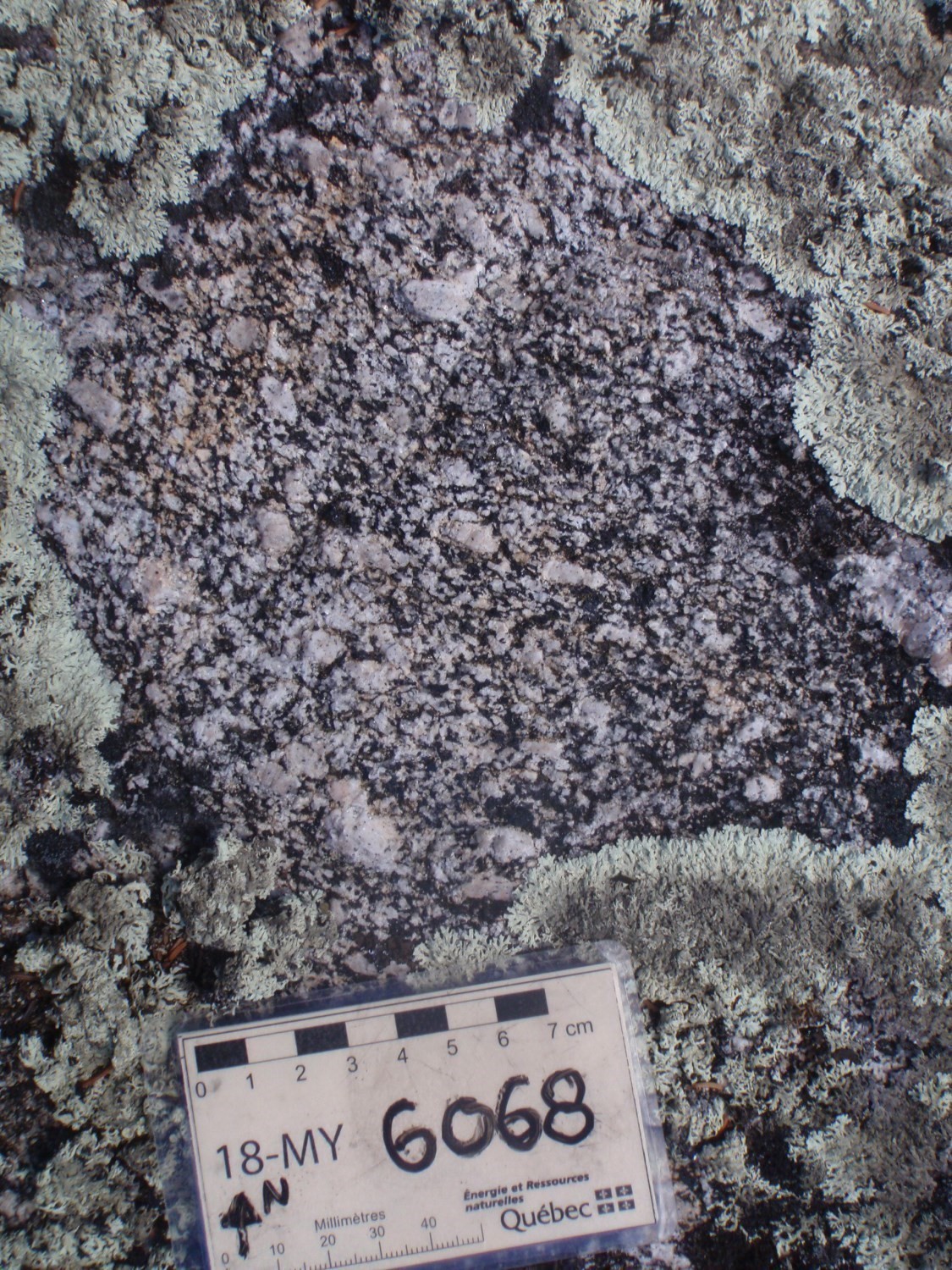 K-feldspar phenocrystals (mainly orthose) make up 5 to 10% of the rock. These are 1 to 2 cm in diameter, five times coarser than the medium-grained matrix. Ferromagnesian minerals are hornblende (10-50%) and biotite (1-20%). Magnetite, although not very abundant (<1%), gives the rock a magnetic susceptibility high enough to allow identification of the pluton’s contours on aeromagnetic maps. Accessory minerals are titanite, apatite, epidote, zircon, hematite, diopside, chlorite and pyrite. 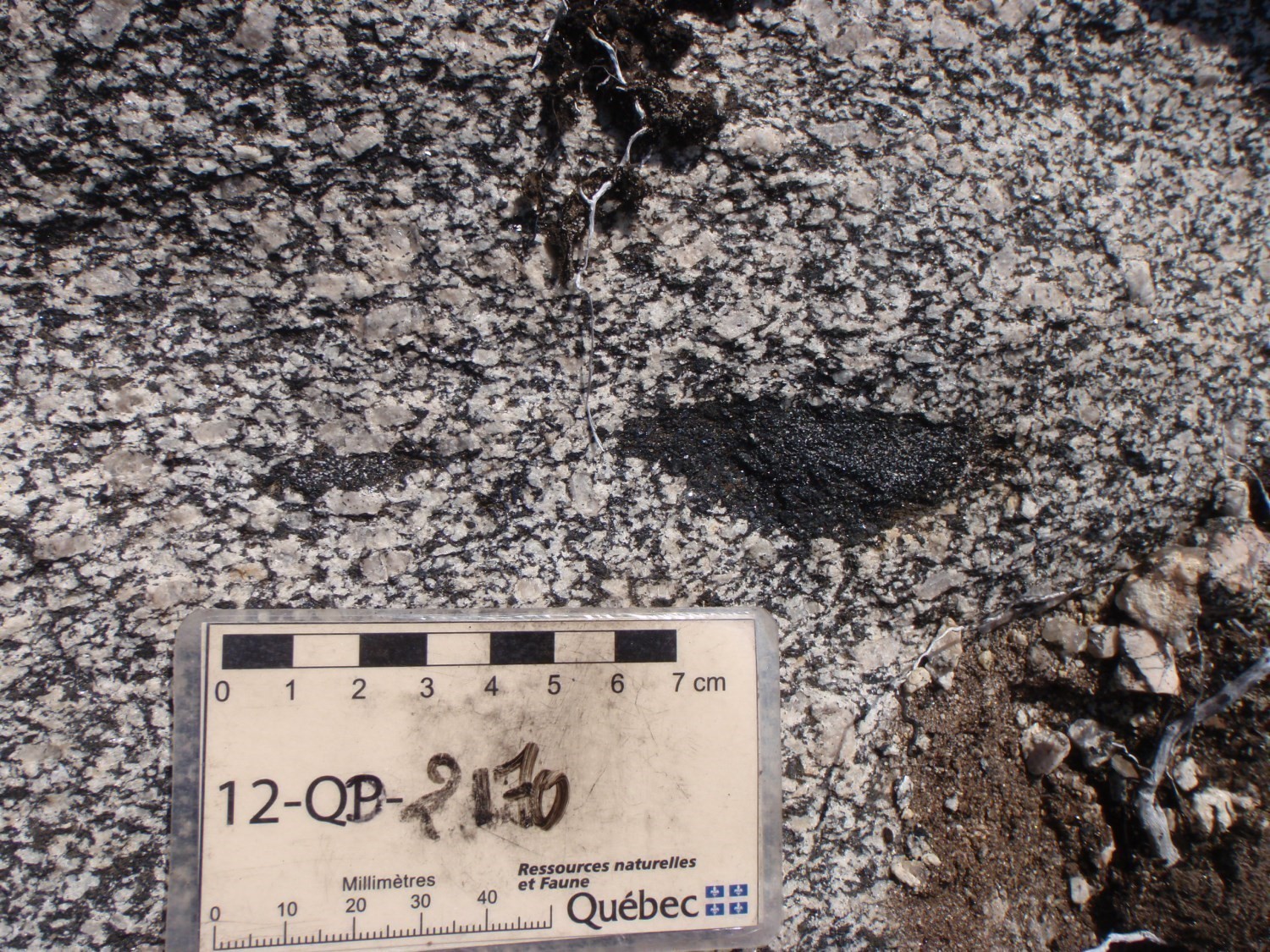 The Frégate Pluton covers an area of 368 km², including 255 km² in sheet 33G02 and 113 km² in sheet 33G03. It is oval and irregular on the surface, which corresponds in part to an oblique cut of a cylinder dipping slightly eastward.

Isotopic dating was performed from an orthose porphyritic hornblende-biotite-magnetite quartz monzodiorite sampled in 2012 on outcrop 2012-JG-1120. The age of 2710.4 ±2.4 Ma obtained is considered to be that of pluton intrusion. It is also a minimum age for the deposition of Laguiche Complex paragneiss in the Frégate Lake area.

The Frégate Pluton is intrusive into the Laguiche Complex. It also cuts local tonalitic gneiss horizons (SE shore of Frégate Lake) that could belong to the Marjoulet Gneiss. It is noted that adjacent rocks (tonalitic gneiss and paragneiss) are generally more deformed. This is likely associated with rock competency contrast. The Frégate Pluton is cut by numerous granitic intrusions, including some of the Vieux Comptoir Granitic Suite, and by dykes of the Mistassini Dyke Swarm, Senneterre Dykes and an undifferentiated diabase dyke.