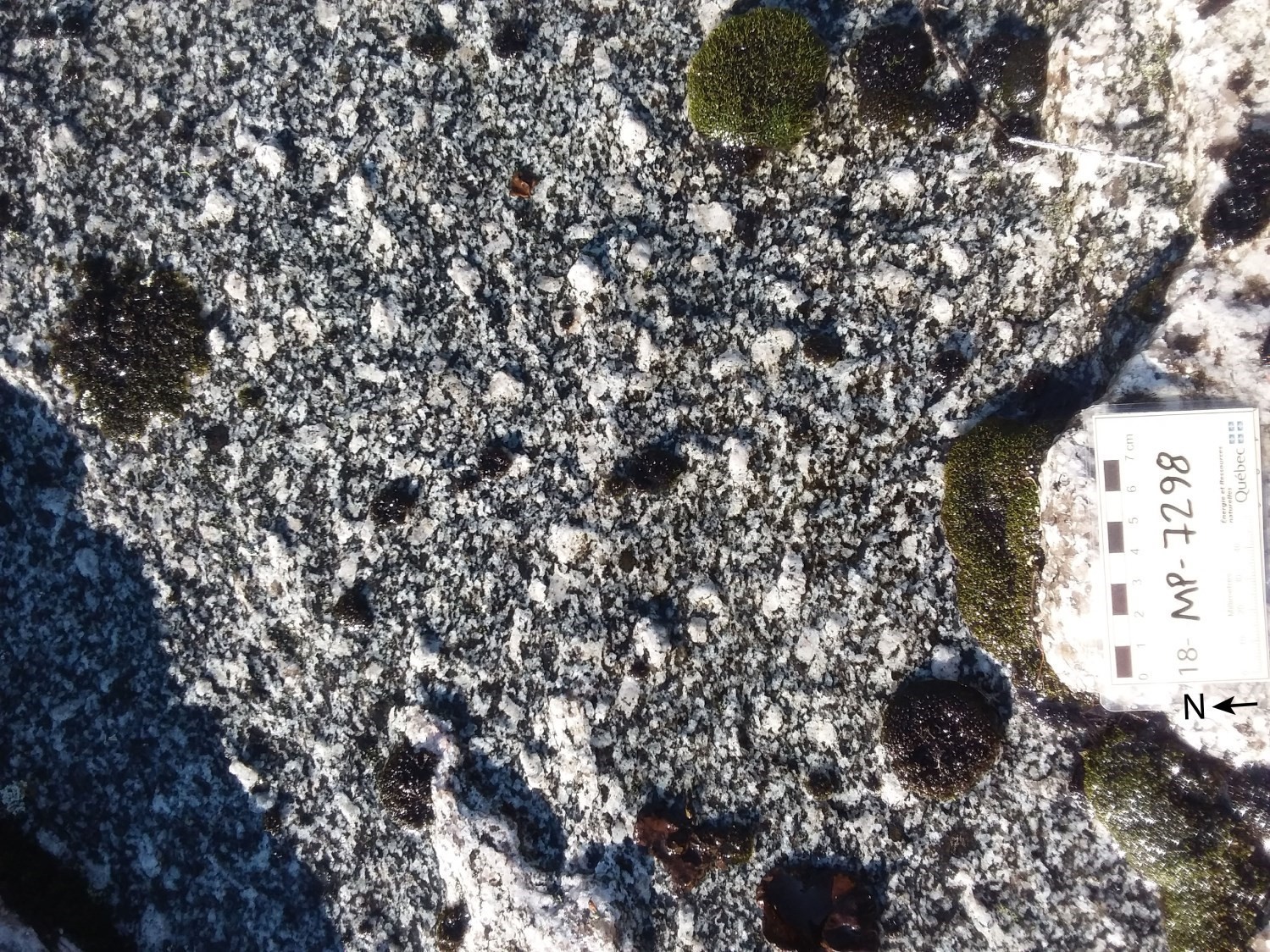 The Casterne Pluton is a formal unit of the Féron Suite established by Côté-Roberge and Goutier (2019). The name refers to Casterne Lake, located less than 5 km from the type outcrop used for isotopic dating (2018-MY-6315). 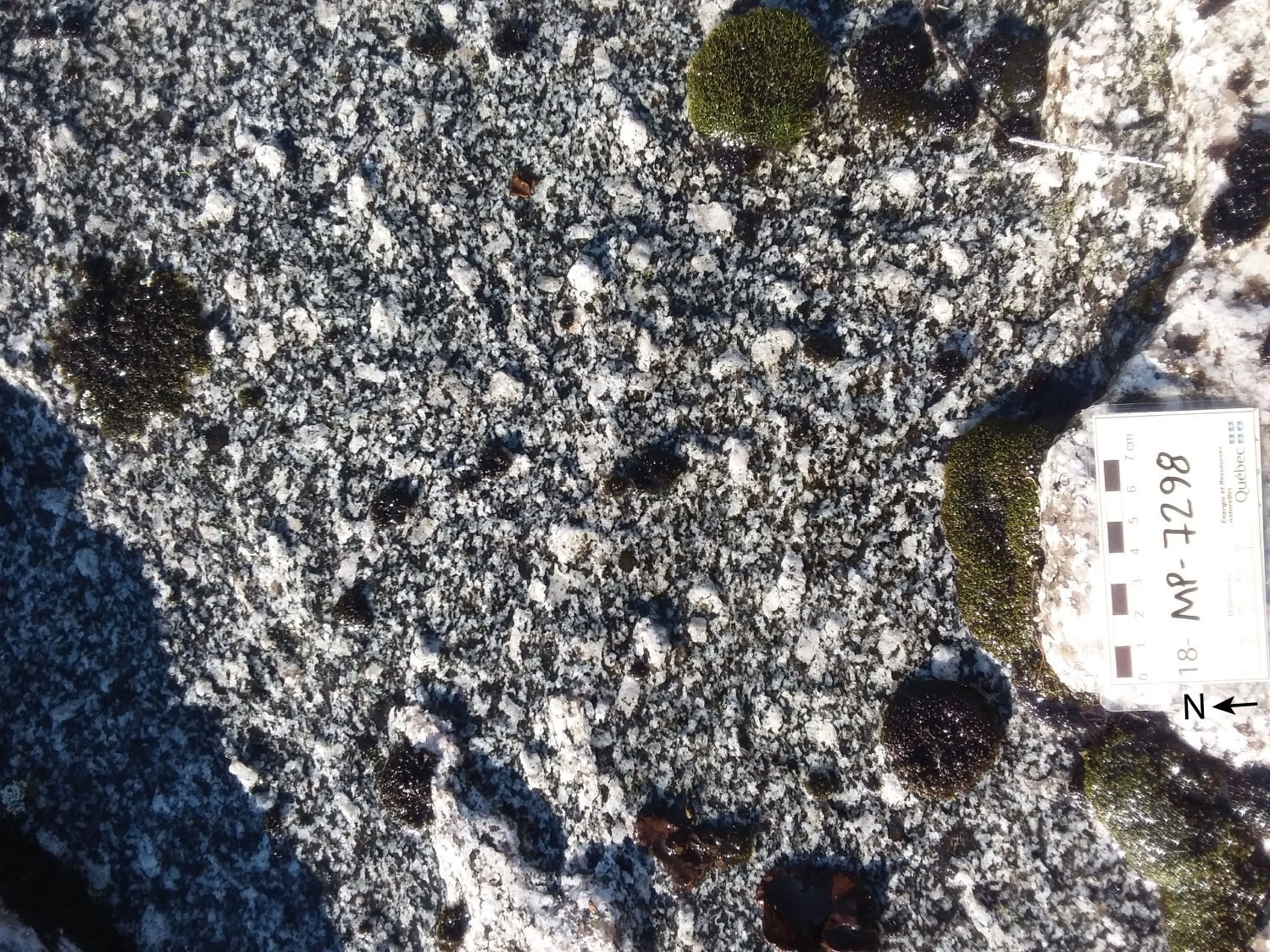 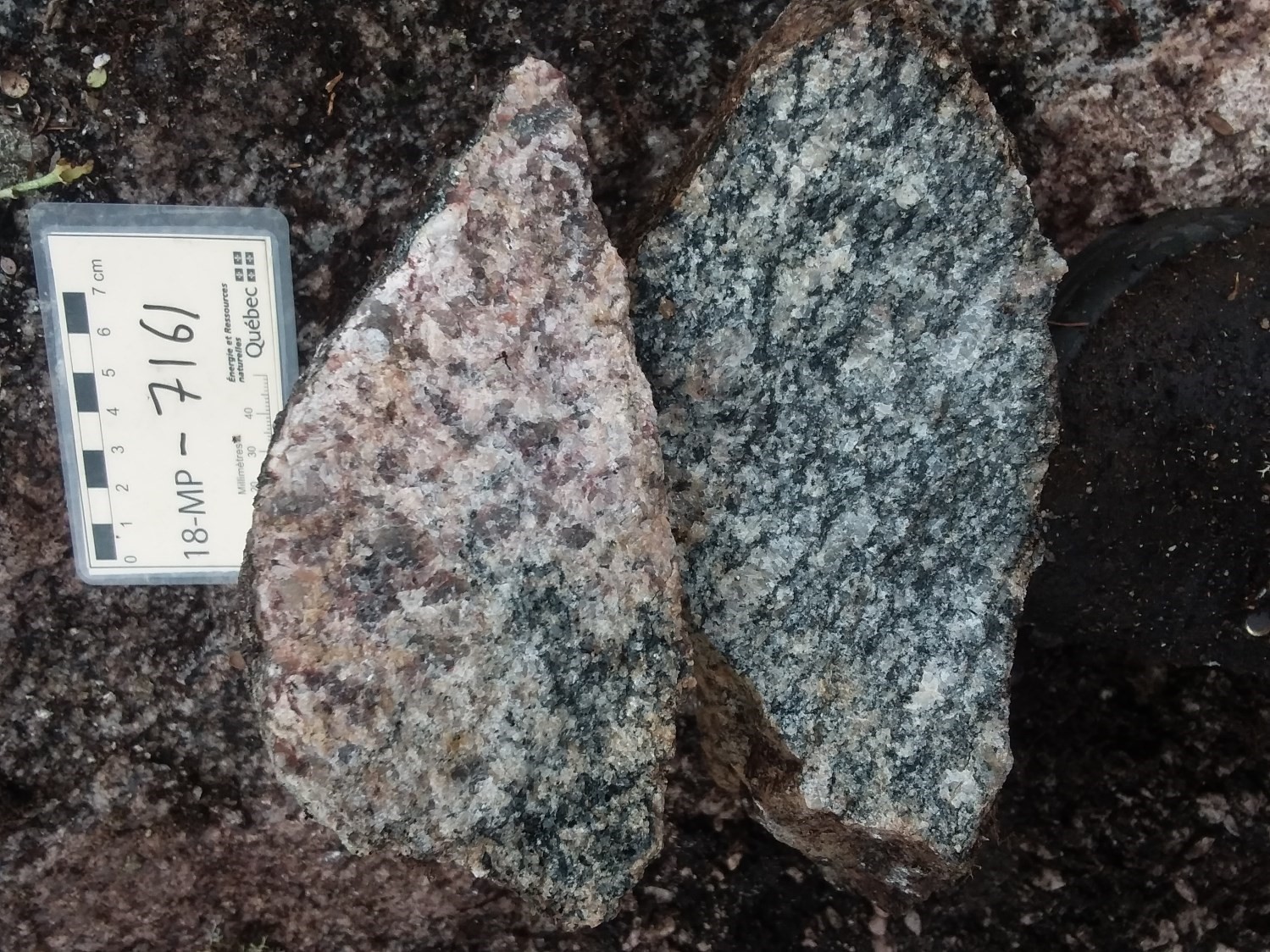 The composition of the Casterne Pluton is intermediate to felsic. The most commonly observed lithology is a porphyritic quartz monzodiorite. There are also smaller amounts of monzonite, quartz monzonite, monzodiorite, quartz diorite and granodiorite. These lithologies are grey in fresh exposure and commonly intruded with coarse-grained pink granite.

The intensity of deformation varies from low to medium. A south-dipping E-W to NE-SW foliation can be measured on most outcrops. In places, rocks show a L/S tectonite fabric with secondary and tectonometamorphic mineral lineations defined by the alignment of mafic minerals shallowly dipping towards the ENE to NE.

K-feldspar phenocrystals make up 1-10% of the rock and are 1-2 cm long, five times coarser than the medium-grained matrix. Petrographic observations indicate that these phenocrystals are orthose, although microcline is abundant in the matrix. The pluton’s mineralogy is characterized by hornblende (5-15%), biotite (3-15%) and trace magnetite. Sphene and epidote are observed in a few places.

The Casterne Pluton is ovoid in shape and shallowly dips eastward. It is 20 km long, parallel to the main foliation, by 10 km wide. The Casterne Pluton is distinguished from adjacent units by its distinct magnetic signature. Several elongated magnetic ridges are arranged concentrically with a closure in the west that is better developed than in the east, where the pluton is cut by the Vieux Comptoir Granitic Suite. It covers an area of 76 km2 in the NW part of sheet 33G03, 17 km2 in the NE of sheet 33G04, and less than 1 km2 in sheet 33G06.

Isotopic dating was performed on an orthose porphyritic hornblende-biotite-magnetite-epidote monzodiorite sampled in 2018 on outcrop 2018-MY-6315. The age of 2701.5 ±2.4 Ma obtained is considered to be that of pluton intrusion and is also a minimum age for deposition of Laguiche Complex paragneiss in the Casterne Lake area.

The Casterne Pluton cuts paragneiss and migmatites of the Laguiche Complex, as well as a biotite-magnetite tonalite-granodiorite intrusion in sheet 33G04. In sheets 33G03 and 33G06, it is completely isolated from paragneiss by a granite of the Vieux Comptoir Granitic Suite. It is also cut by a dyke belonging to the Mistassini Dyke Swarm.