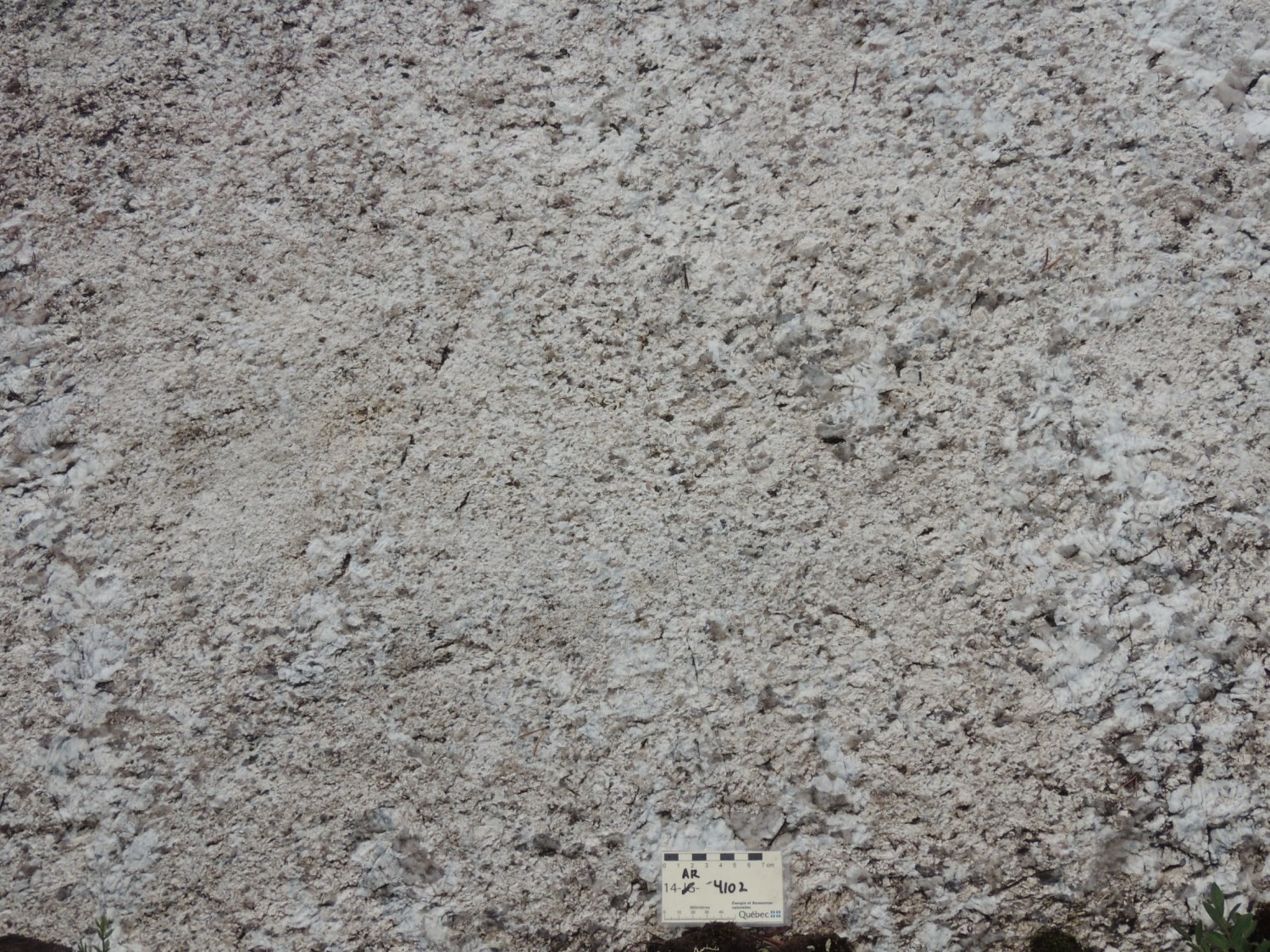 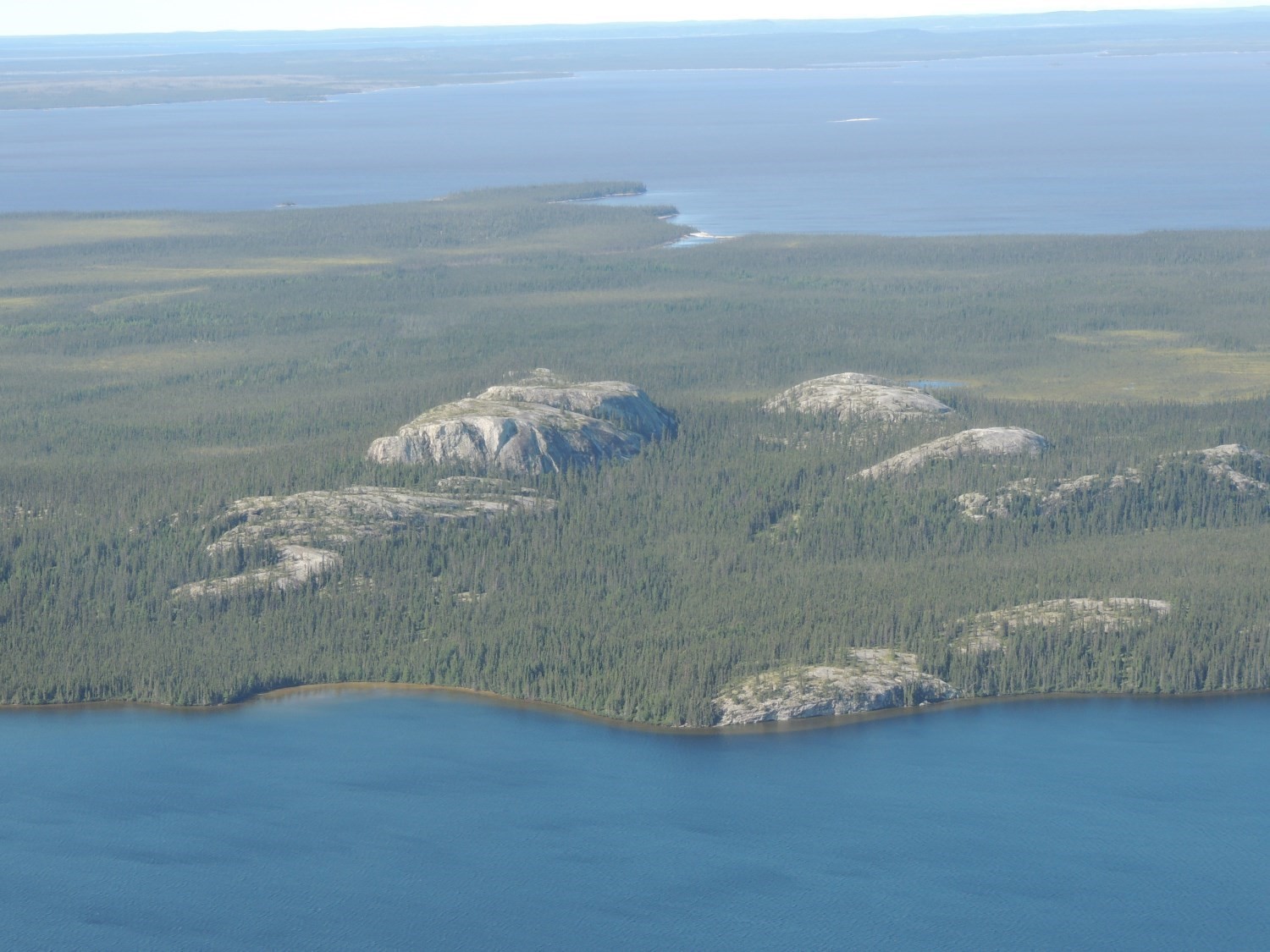 The Vieux Comptoir Granite unit (Avcr) was introduced by Goutier et al. (1999) to describe a package of granite intrusions that are not or slightly deformed, medium to coarse-grained, locally pegmatitic and poor in mafic minerals (less than 10% biotite and hornblende ± tourmaline ± garnet). These intrusions with a white to pinkish patina form numerous white hills visible in the landscape, on aerial photographs of the Sakami Lake area (Goutier et al., 2000) or on satellite images. The “Vieux Comptoir Granite” lithodeme was rose to the rank of a suite in 2017 with the name of “Vieux Comptoir Granitic Suite” as Géologie Québec’s mapping work after 2008 in sheets 33G, 33H and 23D showed the presence of these granites. This new designation, made when the unit was added to the Quebec Stratigraphic Lexicon, is based on the fact that this unit consists of several intrusions spread over a large area (13,650 km²) and over a distance of 530 km along an EW axis. 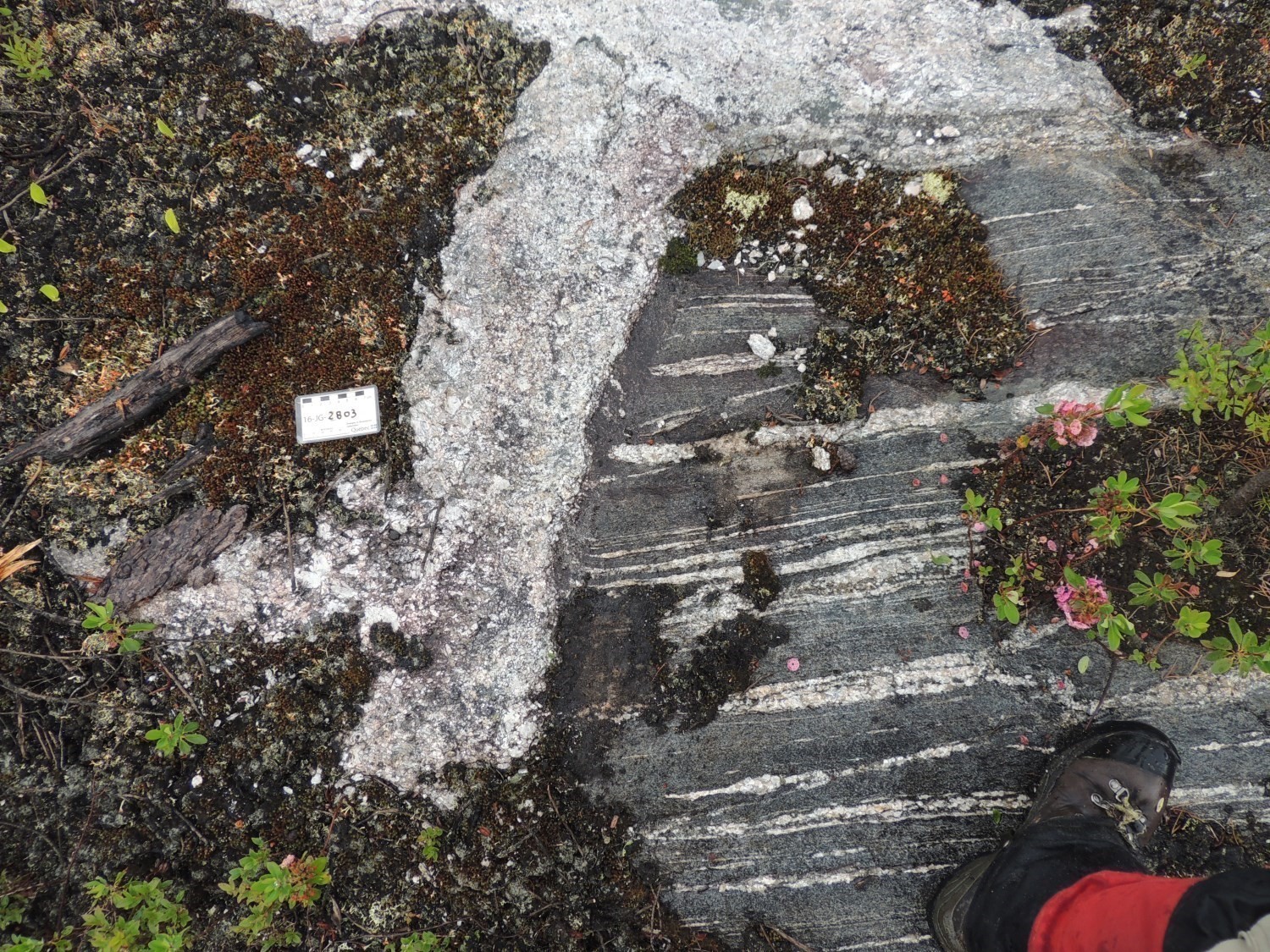 The Vieux Comptoir Granitic Suite represents a package of syntectonic to late-tectonic granites present in the La Grande, Opinaca and Opatica subprovinces. These rocks are characterized by a usually pegmatitic texture, a granitic composition and the presence of biotite, muscovite, tourmaline and garnet. Locally, hornblende, beryl or spodumene are present. These granites usually cut the main foliation and migmatitic bands of the paragneiss of the Laguiche Complex. This suite is divided into three informal units that differ in composition, texture and structure.

Unit nAvcr is an undifferentiated package of granite, pegmatitic granite, K-feldspar granite and, more rarely, spodumene granite. It corresponds to the first units of the Vieux Comptoir Granite recognized during geological mapping of sheet 33F in the 1990s in the southern part of sheets 33F02, 33F03 and 33F04 (Goutier et al., 1999, 2000). This unit is used for naming granitic plutons of heterogeneous grain size which outcrop intensively and cannot be subdivided. 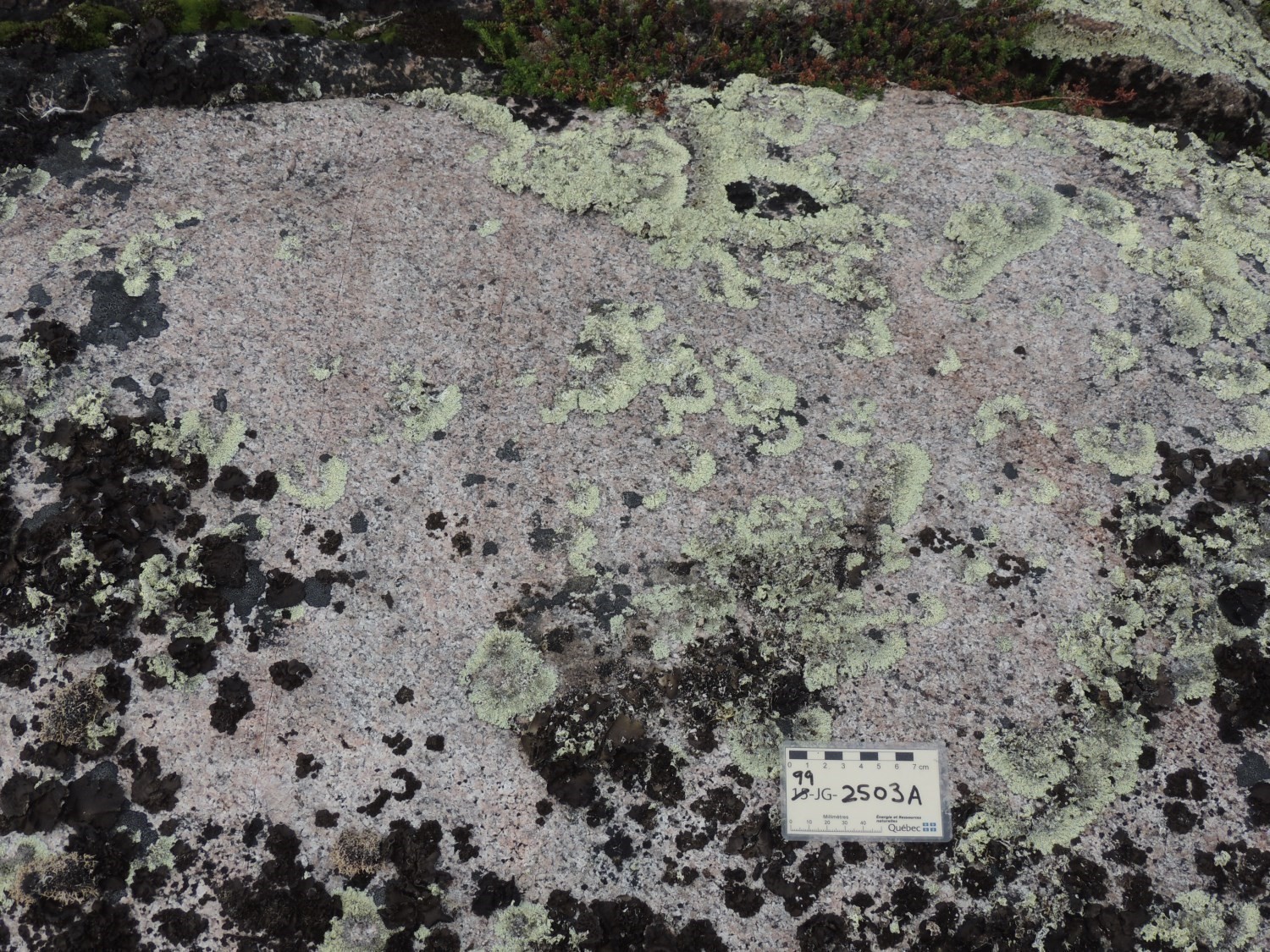 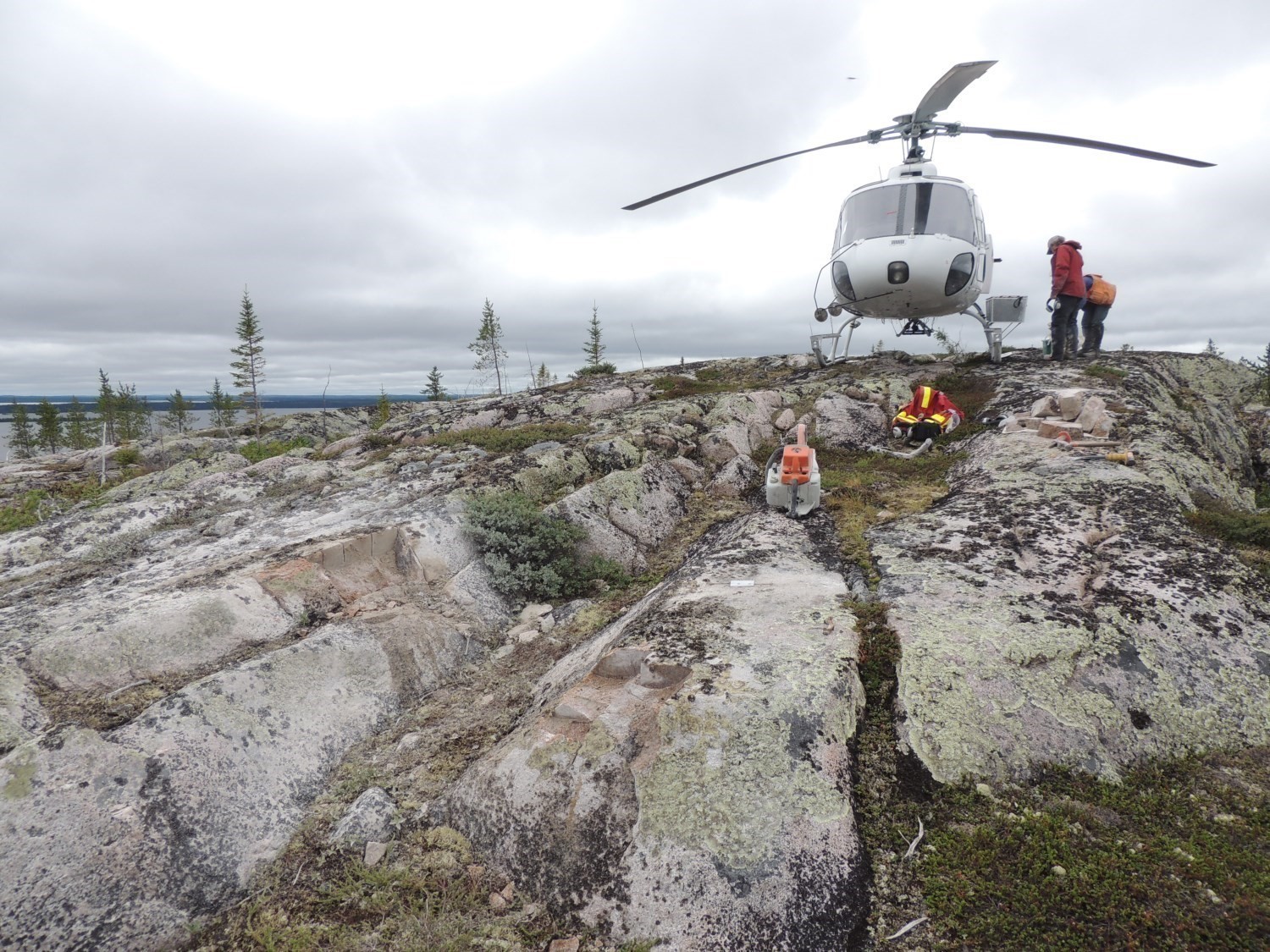 Unit nAvcr1 is the largest package of the Vieux Comptoir Granitic Suite. It consists of a biotite ± magnetite granite and a biotite-magnetite ± hornblende ± epidote granite, massive to slightly foliated. These sweet pink granites are typically fine to medium-grained, locally pegmatitic. They are composed of quartz, plagioclase and K-feldspar in equal proportion and of a small amount of mafic minerals. In the area of sheets 33F02 and 33F03, seven hornblende occurrences were observed in the northeast portion of the large pluton of unit nAvcr1. Since the latter are disseminated in the pluton, it is not possible to group them into a subunit. 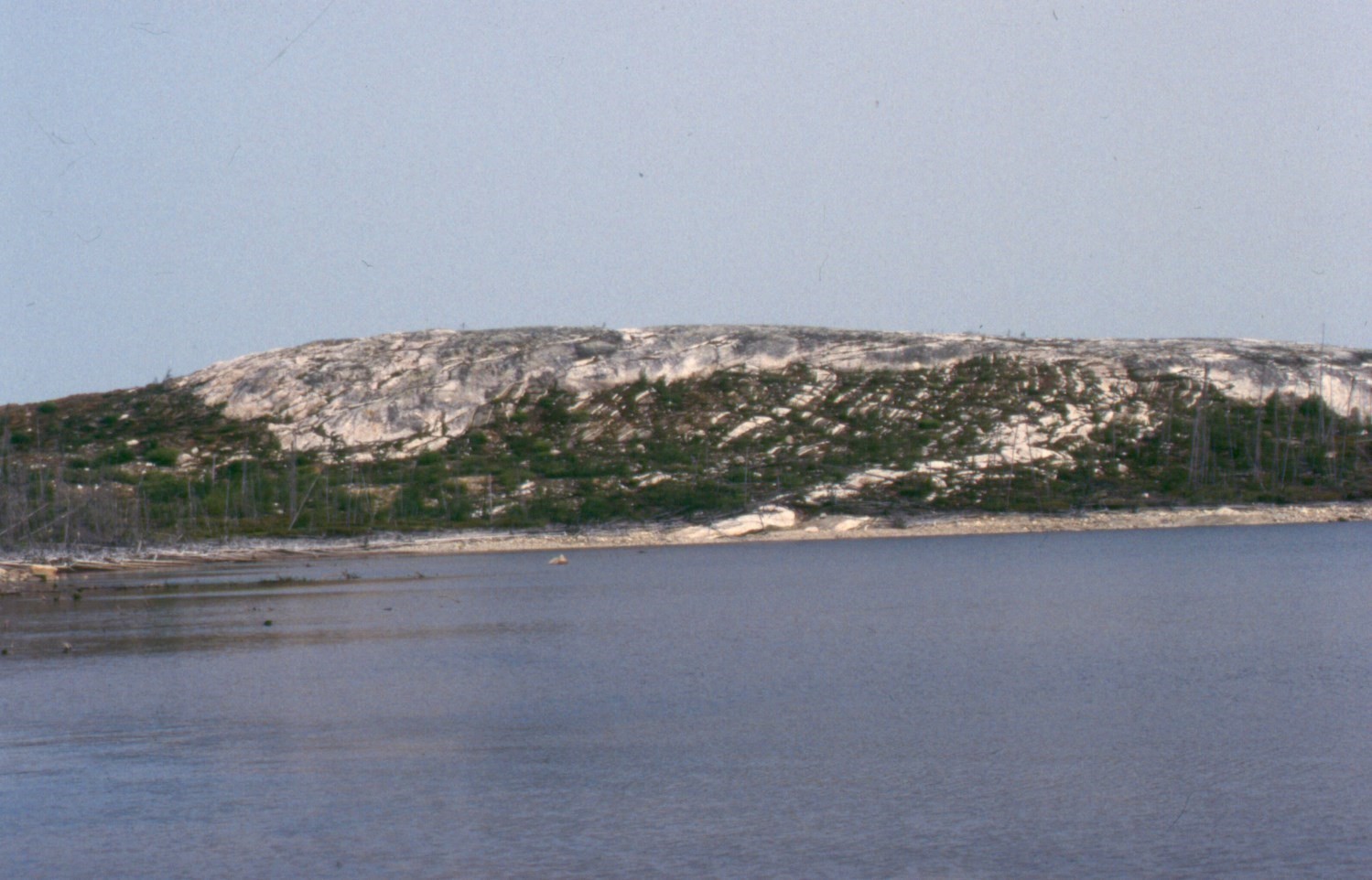 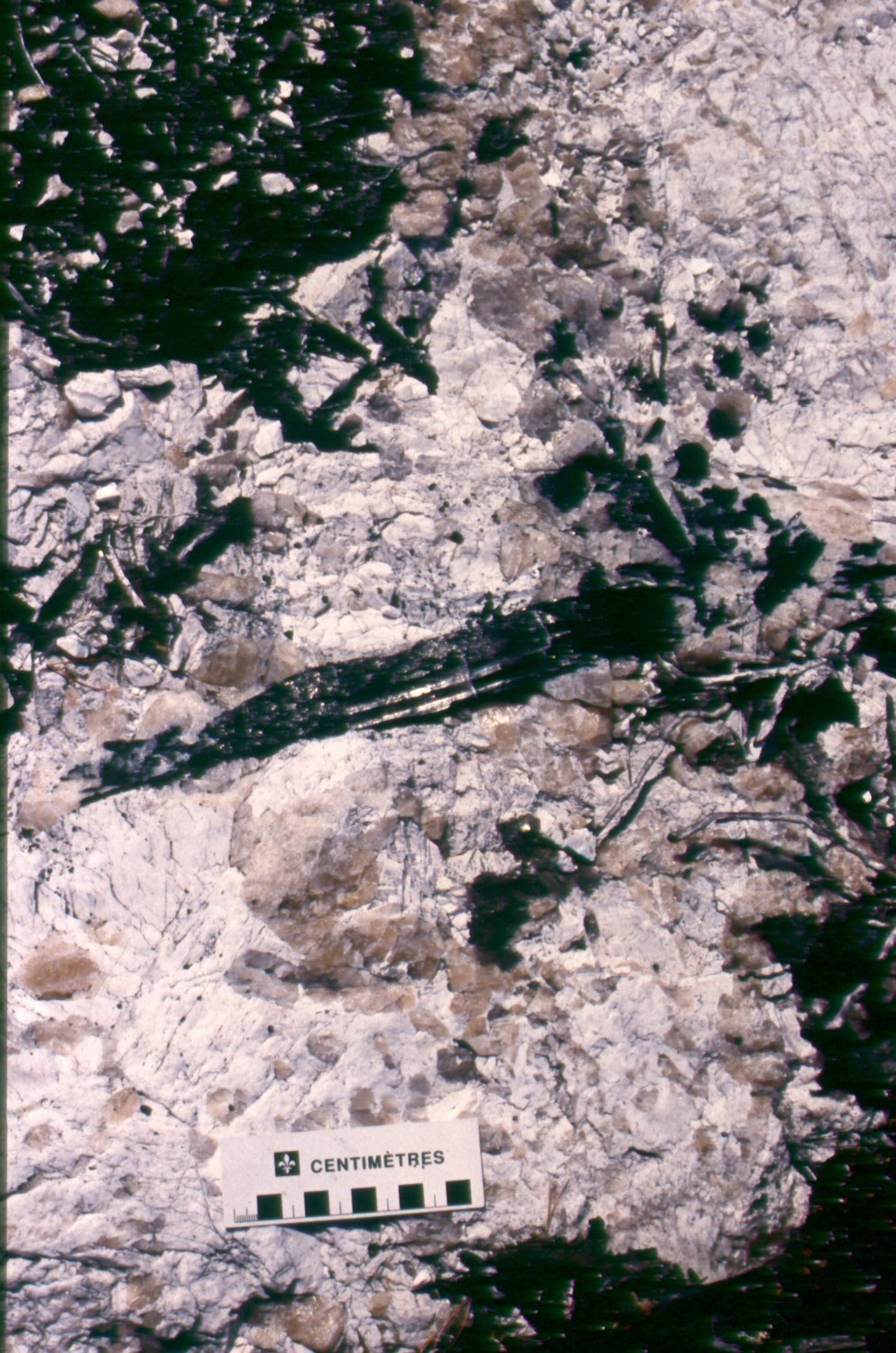 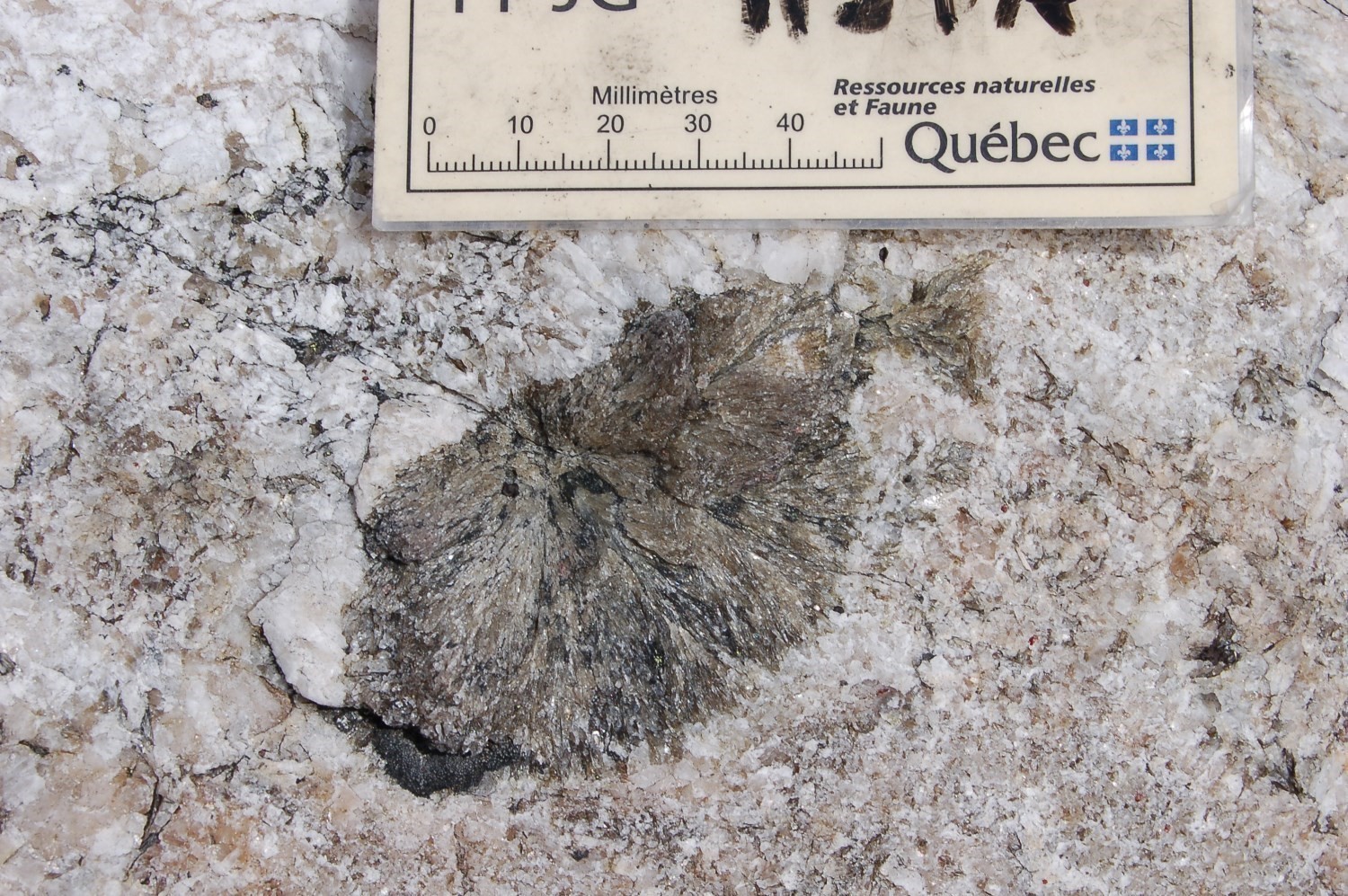 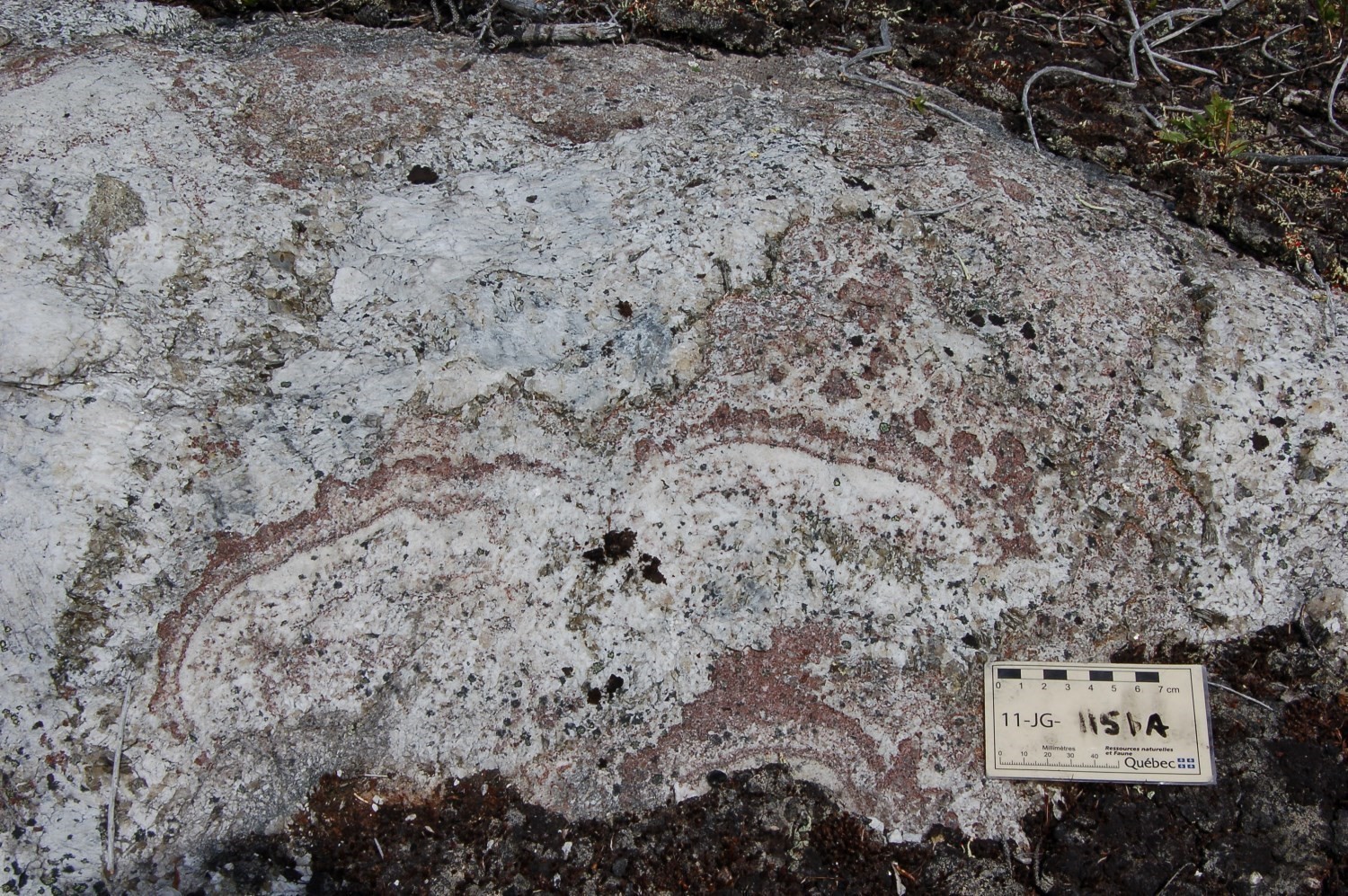 Unit nAvcr2 outcrops as rounded hills without vegetation. It is characterized by the abundance of granite of various grain sizes rich in K-feldspar (orthose and microcline with local varieties containing adularia or amazonite) and a typical mineral assemblage including biotite, muscovite, black tourmaline, pink garnet and blue or green apatite. Magnetite is present in some places. Tourmaline crystals can reach 25, whereas orthose crystals reach 50 cm and biotite crystals up to 10 cm. Beryl is observed locally as crystals from a few millimetres to 15 cm in length. Typically white or slightly pink granite is distinguished by pegmatitic and graphic textures. Decimetric to metric horizons of pegmatite contain in places centimetric rosettes of muscovite. Gold was observed in the heavy mineral concentrate of the sample of outcrop 1995-LP-90 used for U-Pb isotopic dating (sheet 33F02; Jean David, personal communication), as well as in thin section of samples of the Orfée gold mineralized zone (sheet 33G06; Bogatu and Huot, 2016).

In places, granite exhibits magmatic banding underlined by grain size and modal variations. This structure is manifested by alternating fine to medium-grained centimetric to decimetric horizons associated with bands or laminae rich in garnet, muscovite and tourmaline. The composition of these bands varies between K-feldspar granite and syenogranite. Although the rock does not appear deformed at megascopic scale, a large number of microfractures and a cataclase of feldspar crystals are commonly observed in thin section. Dykes of unit nAvcr2 cut granites of unit nAvcr1. 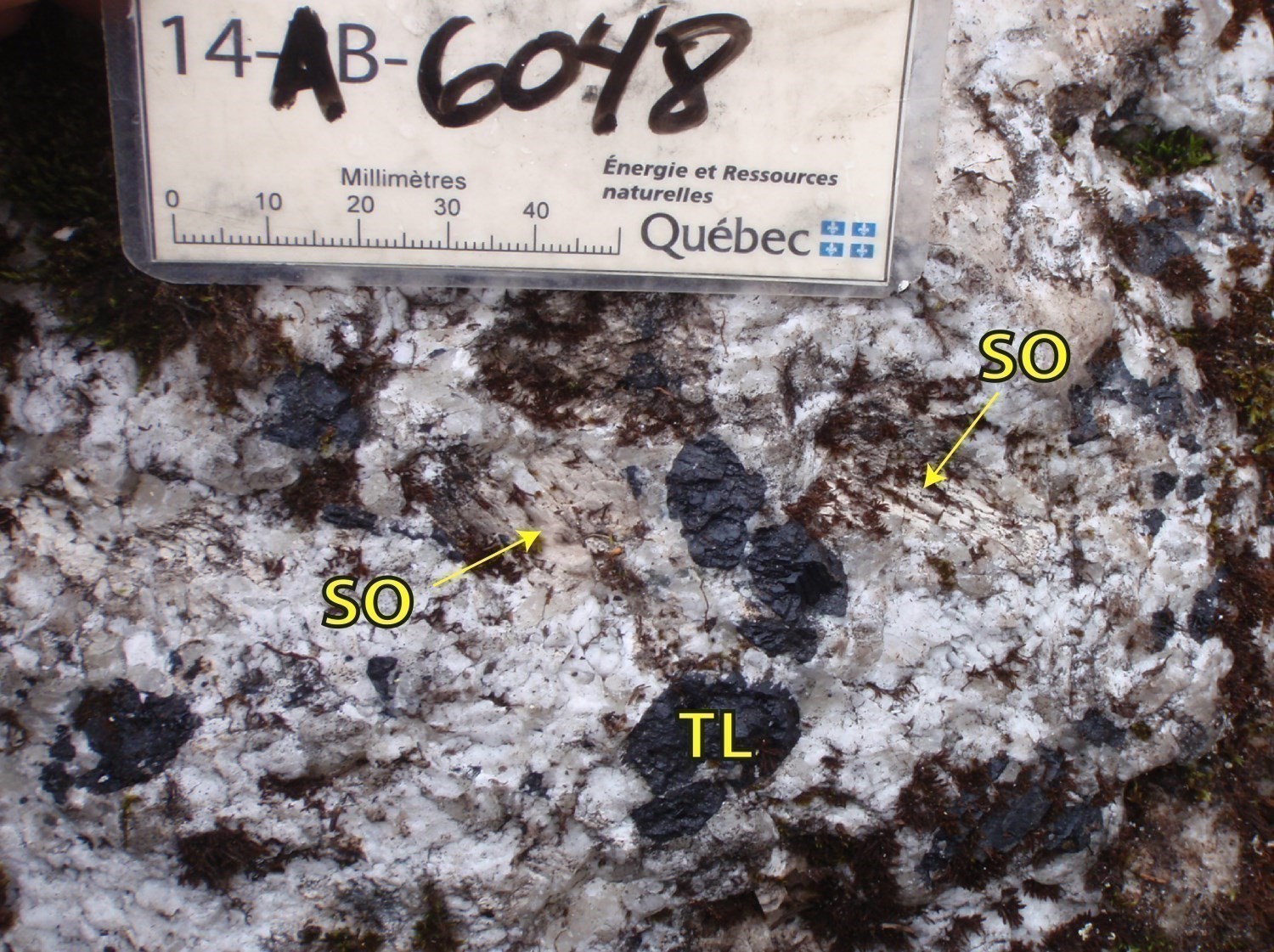 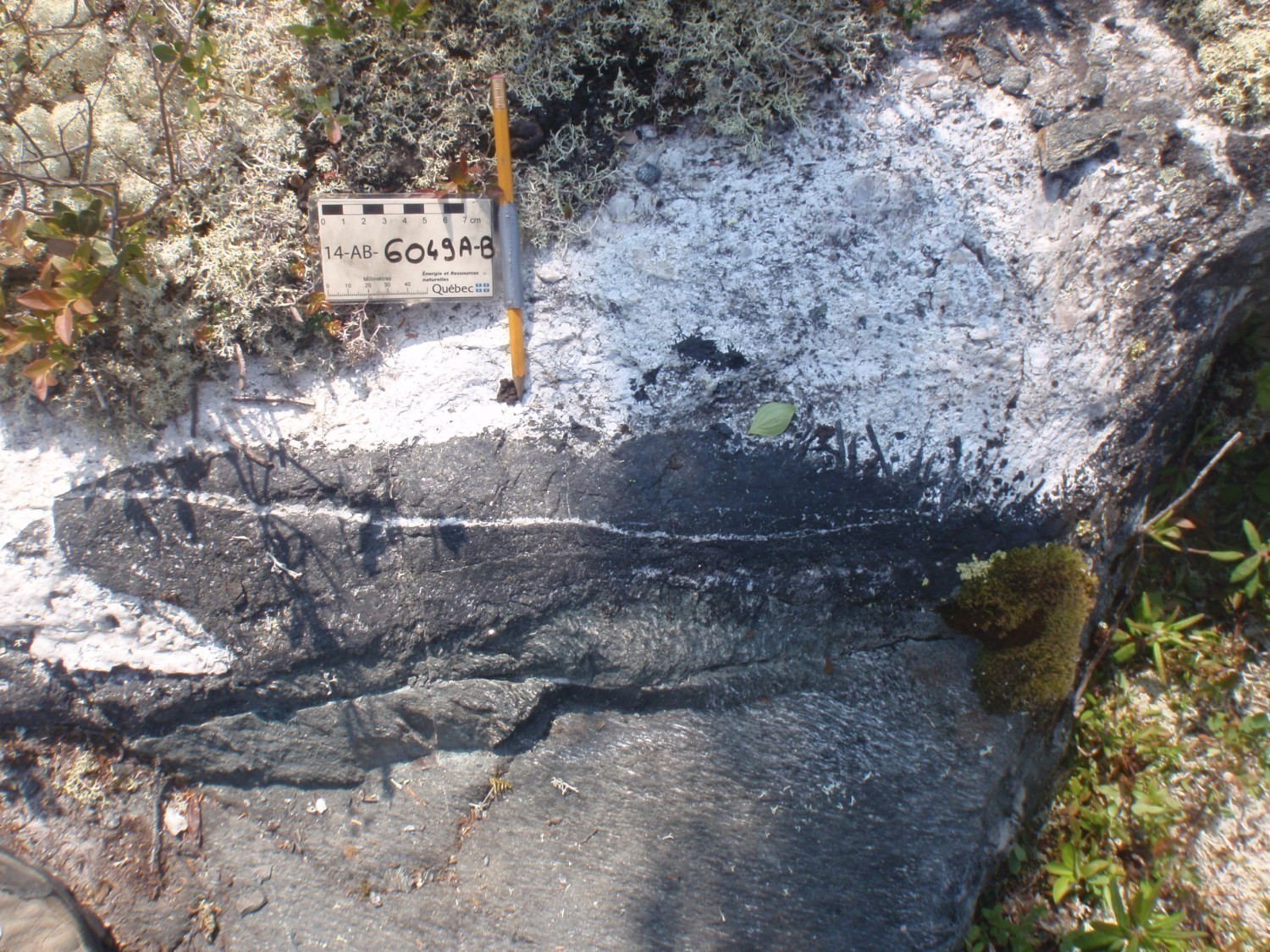 Unit nAvrc3 is composed of K-feldspar granite which is distinguished from that of unit nAvcr2 by the abundance of spodumene. Several outcrops of this unit correspond to lithium (Mia-Li1, Mia-Li2, Adina, Cancet) or beryl (Boily and Gosselin, 2004) mineralization. For example, the Adina mineralized zone (sheet 33H08) consists of massive coarse-grained or pegmatitic granite containing centimetric crystals of tourmaline (1-6%) and pink and yellow-beige spodumene (2-3%) associated with traces of apatite. The contact of this granite with volcanics of the Trieste Formation is distinguished by the presence of a decimetric rim of massive tourmaline (Burniaux et al., 2019). Geochemical study indicates that it is calc-alkaline granite, peraluminous, from an S-type magma with an intraplate signature (Guemache et al., 2017). On sheet 33H12, small intrusions (e.g., 30 m by 150 m) contain crystals nearly one metre in length (92 Resources news release, October 2017).

The Vieux Comptoir Granitic Suite (nAvcr) represents a package of granitic intrusions of decametric to kilometric magnitude recognized in the La Grande, Opinaca and Opatica subprovinces (Goutier et al., 2000, Bandyayera et al., 2011; Talla Takam et al., in preparation). These granites, which are generally not or slightly deformed, are present in sheets 33E to 23D over a distance of nearly 530 km. Their dimensions vary from a few metres for the smallest intrusions to several tens of kilometres for the largest ones, (e.g., 27 km by 78 km, sheets 33C13 to 33F02; 5 km by 60 km, sheets 23D12 and 23D11).

Unit nAvcr1 is located primarily at the east and west ends of the Opinaca Subprovince. Most of the nAvcr2 granite intrusions occurred along the boundary between the La Grande and Opinaca subprovinces (e.g., Sakami Lake area, sheet 33F02; Léran Lake area, sheet 23D12). Unit nAvcr3 is recognized in three areas: 1) near Miakadow Lake (sheet 33F04); 2) as a pluton 1200 m long by 350 m wide in the SW portion of sheet 33H08; and 3) in the area of Léran Lake, where it is not exposed but visible as erratic blocks. 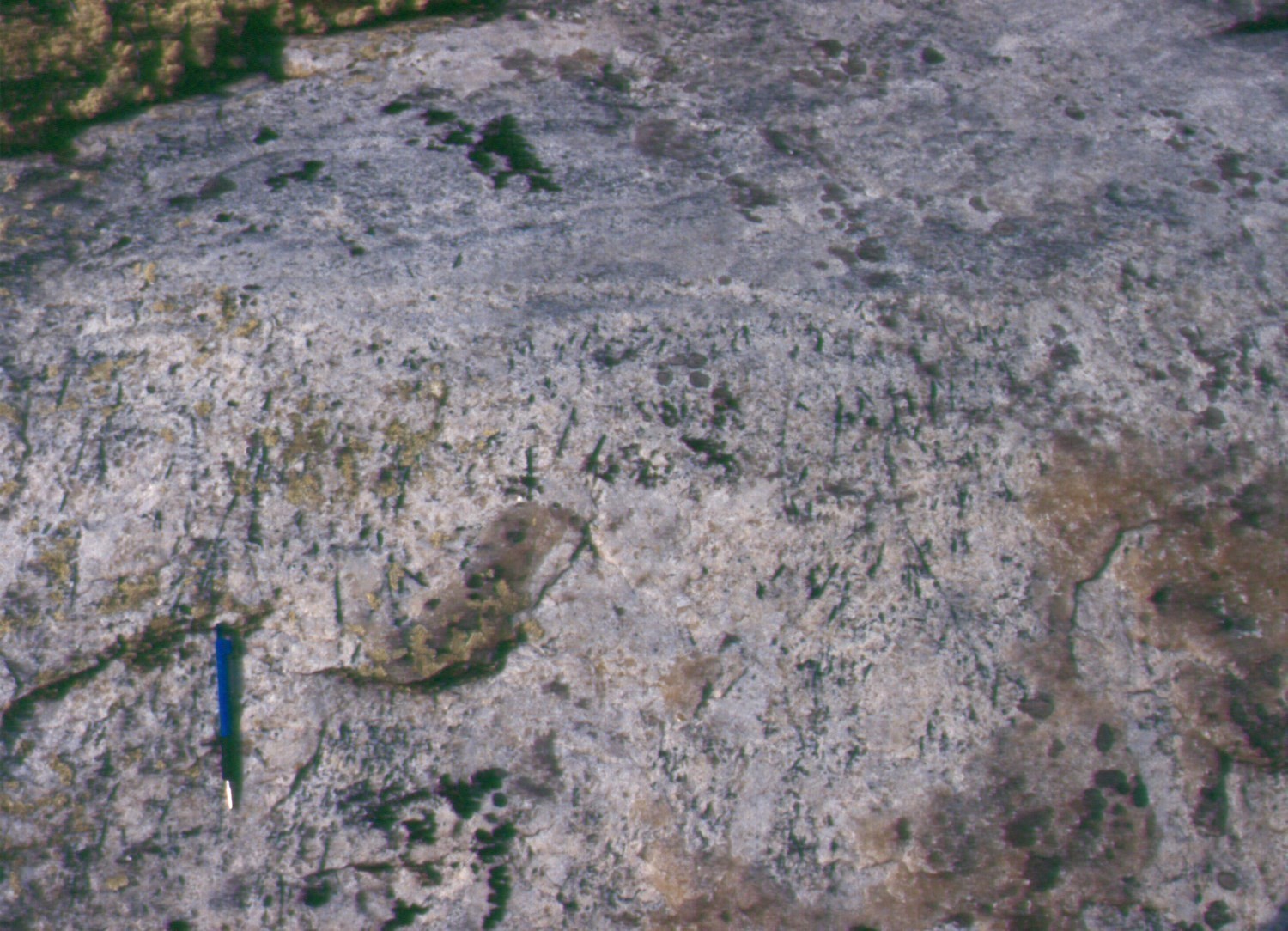 Rocks of the Vieux Comptoir Granitic Suite cut almost all rocks of the La Grande, Opinaca and Opatica subprovinces, as well as the main foliation. Some smaller dykes are boudinaged and transposed to shear zones (Orfée and Quentin gold mineralization) indicating that deformation continued after 2614 Ma. The Vieux Comptoir Granitic Suite is cut by the Shpogan Dykes, Lac Esprit Dykes, Senneterre Dykes and Mistassini Dyke Swarm.

The report prepared by Goutier et al. (1999) presents, on Figure 20, a detailed map of the Miakadow area (sheet 33F04). On this map, dykes of the Vieux Comptoir Granitic Suite cut all units in the area, and this after the two deformation phases they underwent. These intrusions are therefore later than all the other events that occurred in this area.