The Lac des Montagnes Ultramafic Intrusion was first named and described by Valiquette (1963) as a serpentinite lens in a sequence of biotite paragneiss, quartzite and amphibolitized basalt. It has been the subject of a Master’s thesis (Williams, 1965) and a Bachelor’s thesis (Bédard, 2014) at Université Laval, Québec. It is one of a series of mafic-ultramafic intrusions designated as the “Caumont Mafic-Ultramafic Suite” by Bandyayera and Daoudene (2017). All these mafic-ultramafic intrusions are generally oriented NE and intrude into the Montagnes Lake volcano-sedimentary band, located in the contact zone between the La Grande and Opatica subprovinces. The Lac des Montagnes Ultramafic Intrusion is distinguished from other intrusions of the Caumont Mafic-Ultramafic Suite by the presence of chrome mineralization that has been the subject of several detailed exploration works (Labelle, 1981; Bussières et al., 2011).

The Lac des Montagnes Ultramafic Intrusion is the largest ultramafic intrusion of the Caumont Mafic-Ultramafic Suite. It is described separately from this suite for three main reasons: 1) it has been the subject of several detailed studies; 2) it represents an ultramafic intrusion showing well-preserved rhythmic magmatic layering; and 3) it is the only intrusion to have metre to decametre-thick zones of banded chromitite. The intrusion is associated with a strong magnetic anomaly, allowing for better delineation of its contacts (D’Amours, 2011).

The Lac des Montagnes Ultramafic Intrusion consists of three units, from the base to the top (north to south): 1) a peridotite unit (nAmot1), 2) a pyroxenite unit (nAmot2), and 3) a gabbro unit (nAmot3). Valiquette (1963, 1975) and William (1965) used the name “serpentinite” to describe these rocks because primary silicates underwent intense alteration to serpentine, chlorite and amphibole. Today, geochemical analyses and thin sections are used to identify protoliths. All these rocks contain, in varying proportions, disseminated magnetite in positive relief. There is also chromite finely disseminated throughout the intrusion and as centimetre to metre-thick chromitite horizons in sharp contact with peridotite. In thin section, chromite occurs as angular or subrounded grains in a chlorite-serpentine matrix, representing olivine pseudomorphs. In chromite-rich rocks, a chromite network is commonly observed around serpentinized olivine grains (Williams, 1965). 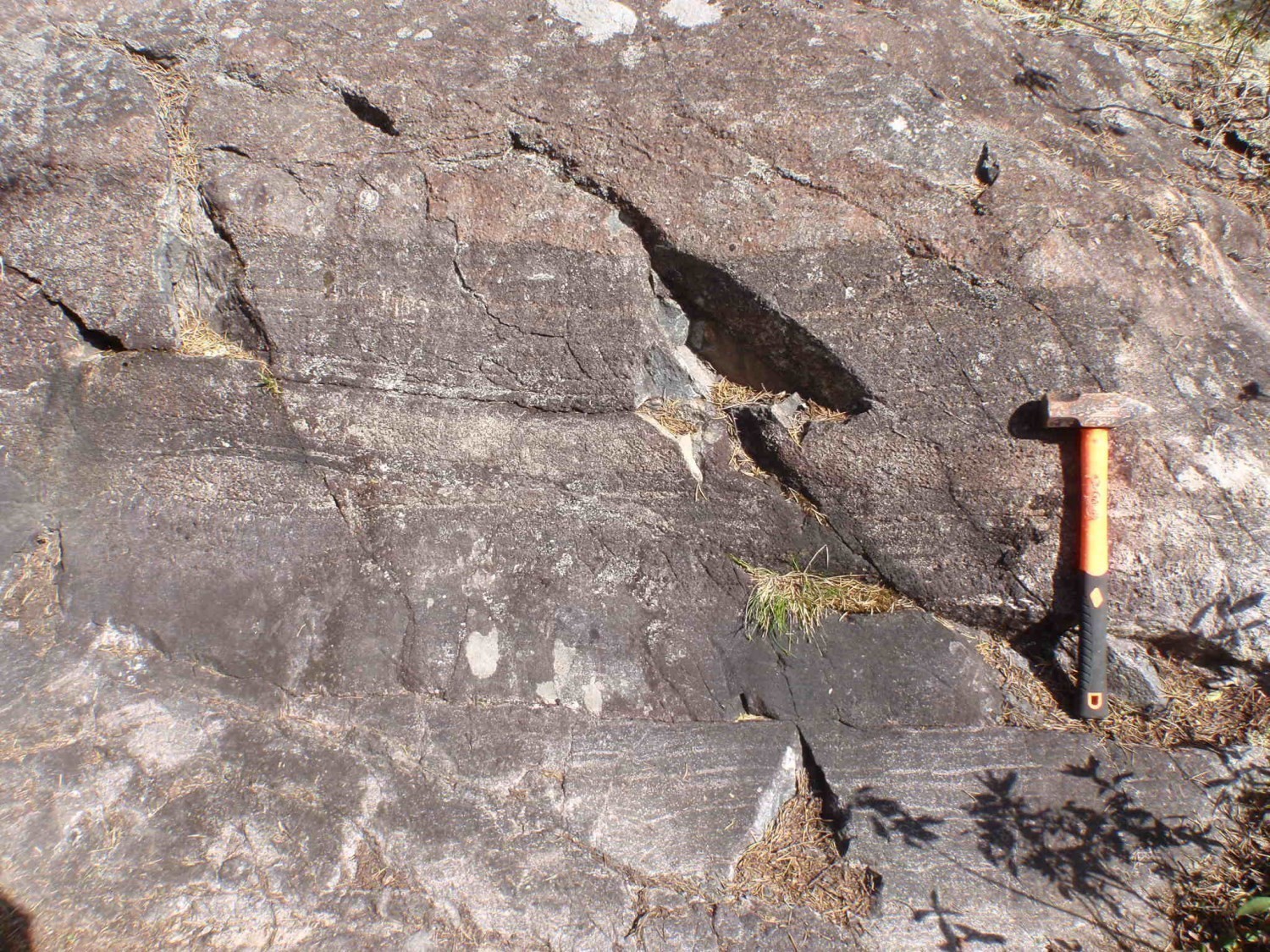 In the northern section of the Lac des Montagnes Ultramafic Intrusion, within the peridotitic unit, there is a chromitite zone 500 m long and 80 m wide containing 0.3-2 m-thick strips of lenticular, massive to semi-massive banded chromitite. The contact between chromitite and serpentinite is sharp. Serpentine occurs as pseudomorphs of olivine or reticulate augite, fibrous-lamellar antigorite aggregates or chrysotile veinlets (Williams, 1965). 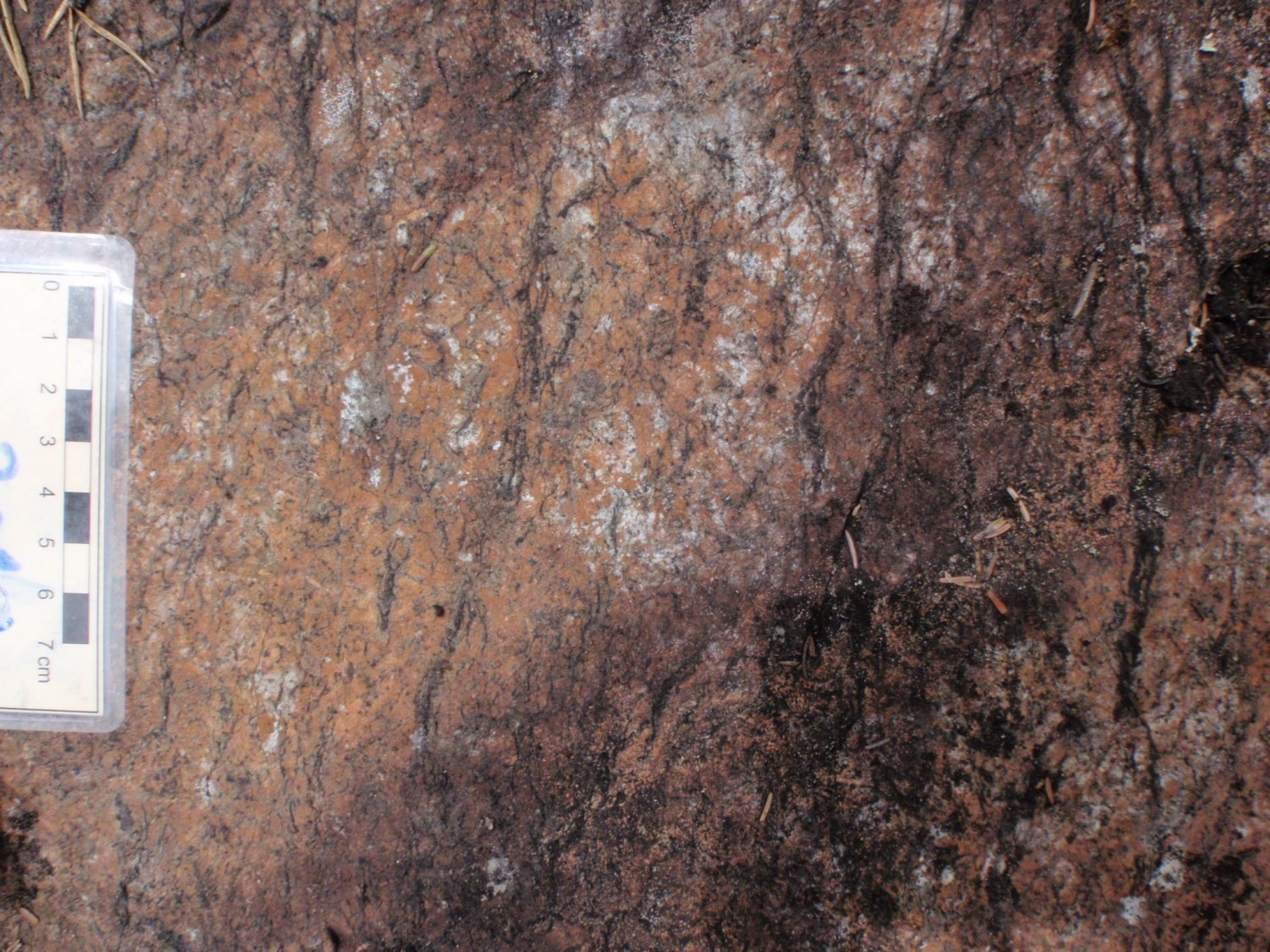 The peridotite with completely obliterated primary texture is grey to greenish grey in fresh exposure, and usually fine grained. The rock is typically magnetic. It has undergone intense alteration to serpentine and talc. In thin section, serpentine replaces all primary minerals. Talc is late as it cuts serpentine; it occurs as fans where the minerals are radial fibrous. In places, primary olivine grains can be observed in thin section. 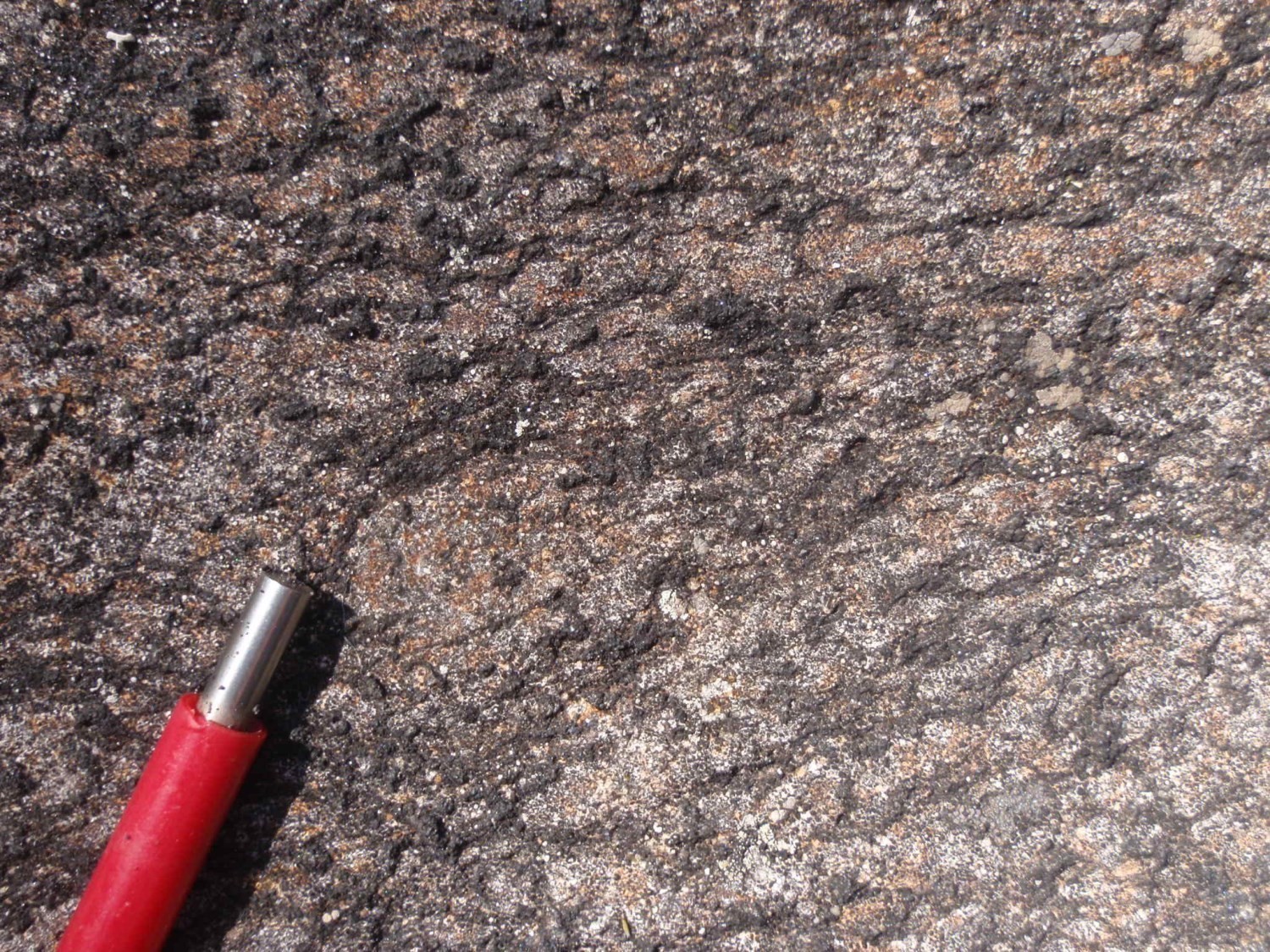 Peridotite with a preserved cumulate texture is orange rust in altered surface, black or dark green in fresh exposure. It is locally light green to coffee brown. On the surface of some outcrops, the rock exhibits small white radial fibres and rusty-brown nodules 1-3 cm in diameter. In thin section, nodules correspond to partially serpentinized olivine grains, while fibres consist of serpentine, tremolite and chlorite. In fresh exposure, one can observe scattered serpentine fibres in a bottle green aphanitic matrix, or a mesh of greenish white fibres that make up the entire rock.

In these rocks, the cumulate texture acquired during fractional crystallization is preserved in several layers, even though olivine crystals are completely altered to serpentine and talc. This texture is typically translated into olivine pseudomorphs composed of antigorite towards the margin, and lizardite towards the centre, whose core is locally composed of chlorite. In places, magnetite±chromite grains are found around the edges of former olivine crystals. Similarly, amphibole varieties such as anthophyllite, actinolite and tremolite with augite relics testify to pyroxene alteration in peridotite. Other samples show very tight coarse olivine pseudomorphs, leaving little space for a pyroxene (or other minerals) matrix, suggesting dunite as a protolith.

Foliated peridotite is observed at the edge of the intrusion or locally in contact with pyroxenite. Deformation gives the rock a zebra appearance, characterized by alternating centimetre-thick light and dark bands. In thin section, serpentine veinlets follow a preferential orientation. 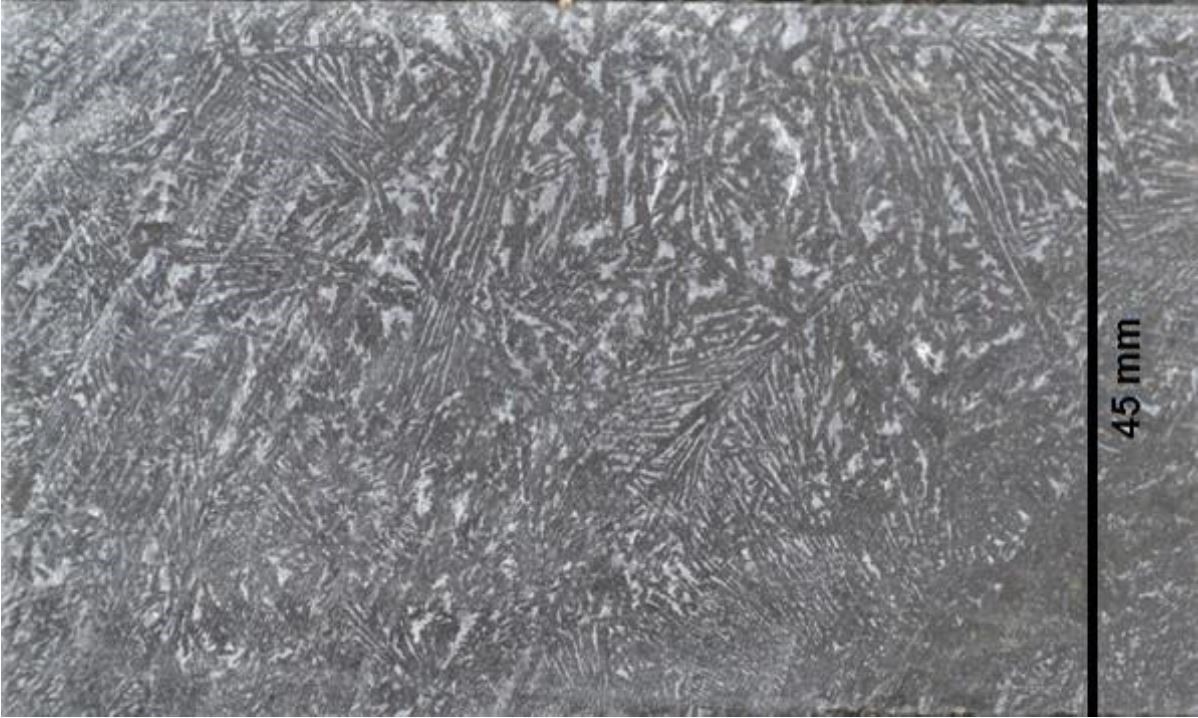 The peridotitic unit is also characterized by the presence of large chromite deposits, spread over three chromitite zones having lateral extensions ranging from 292 to 500 m, and identified in outcrop and drilling (Bussières et al., 2011). Chromitite zones form horizons located at the base, the centre and the top of the peridotite unit. They are composed of several layers containing disseminated chromite (10-30%), matrix and semi-massive chromite (30-65%) and massive chromite (≤85% chromite). The main characteristic of the Lac des Montagnes Ultramafic Intrusion chromitite horizons is the ubiquitous, NE-SW-oriented and SE-dipping magmatic layering. Rhythmic magmatic layering is highlighted by alternating chromite-rich layers and peridotite layers, which are millimetre to centimetre thick and sorted. Peridotite is serpentinized, metamorphosed into talc and has a well-preserved cumulate texture. The contact between peridotite and chromitite layers is sharp at the base, and wavy and gradational towards the top.

Although most of these chromite deposits are layered, they are locally observed as rounded clusters. These clusters are spatially associated with layered deposits, but some are completely isolated. In thin section, chromite grains are subhedral to anhedral, usually fractured and corroded, up to 1 mm in diameter. They are separated from serpentinized olivine by clinochlore. Augite and its serpentine pseudomorphs are common in chromiferous rocks. They generally include chromite grains and are poikilitic. According to William (1965), chromitite deposits of the Lac des Montagnes Ultramafic Intrusion result from fractional crystallization of mafic magma. Partial analysis of a chromite concentrate yielded 30.36% Cr, 15.07% Fe and a 2.01 Cr/Fe ratio (William, 1965). 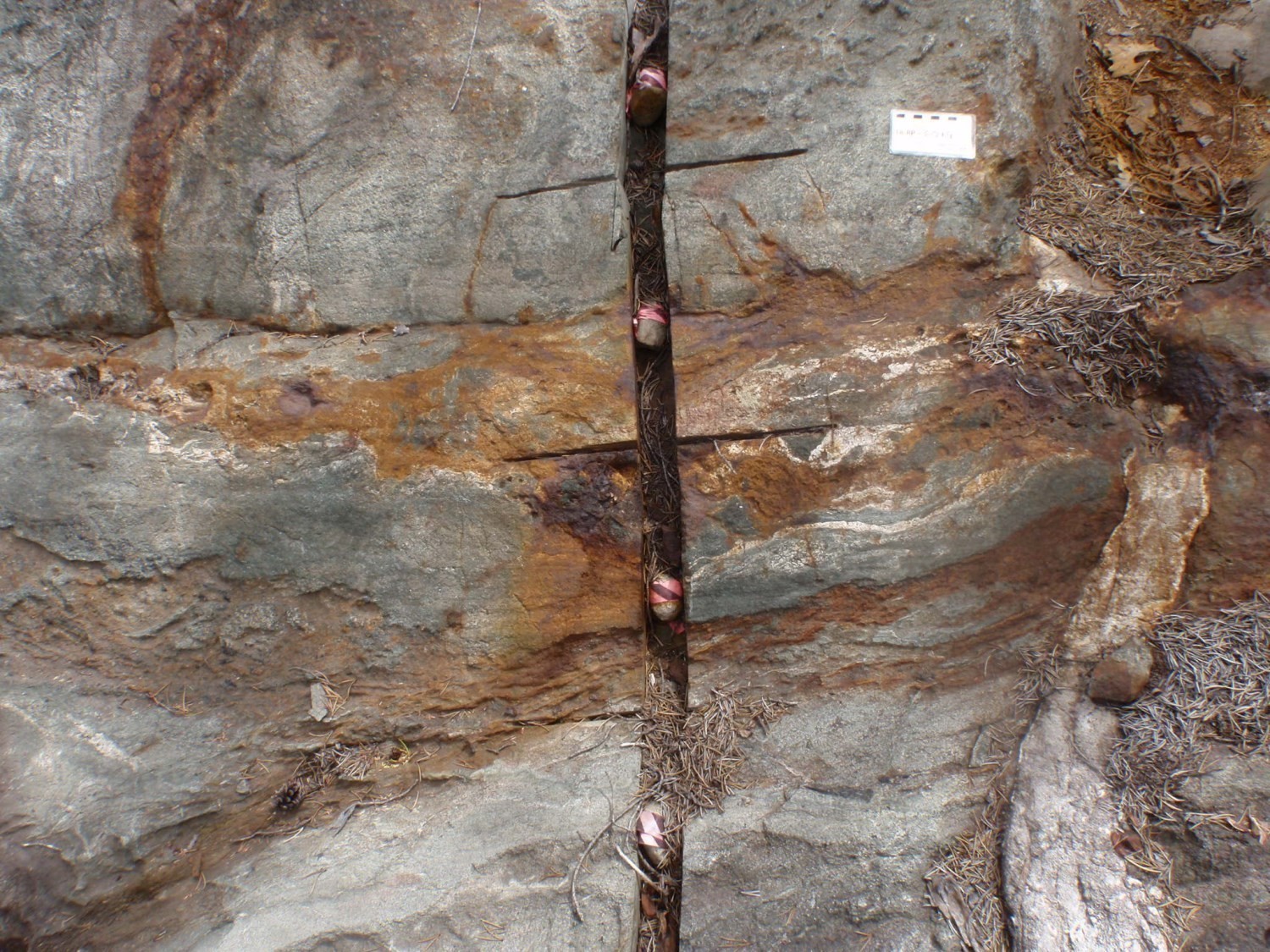 Pyroxenite is greenish in altered surface, greenish grey in fresh exposure and medium to coarse grained. The rock shows a highly intergrown mineral texture, where amphibole crystals (actinolite and tremolite) are elongated or even locally radial fibrous. Other minerals are mainly radial fibrous talc and serpentine. From the top of the pyroxenitic unit to the peridotitic unit, the amphibole crystal size gradually decreases. The summital part is heterogranular and shows coarse amphibole grains in a fine-grained matrix. The basal part is homogeneous and fine grained. Ni-Cu-Au-Ag mineralization is observed in the contact zone between peridotite and pyroxenite.

The Lac des Montagnes Ultramafic Intrusion is located in the western portion of sheet 32O12. It extends in a NE direction over 5 km, has a width of 100 to 240 m, and is located south of Montagnes and Valiquette lakes.

The Lac des Montagnes Ultramafic Intrusion was emplaced in volcanic rocks of the Lac des Montagnes Group and in sedimentary rocks of the Voirdye Formation. Host rocks (paragneiss, quartzite and amphibolite) do not show high-temperature effects that normally accompany the emplacement of ultramafic intrusions (William, 1965). Close drilling shows that the contact between the Lac des Montagnes Ultramafic Intrusion and amphibolitized basalts is sharp; it does not shows any gradation or zone of intermediate composition (Valiquette, 1975). In places, a significant shear zone is observed between the pyroxenite unit and the Voirdye Formation biotite paragneiss. In this extension zone, pyroxenite and paragneiss are sheared and mylonitized.