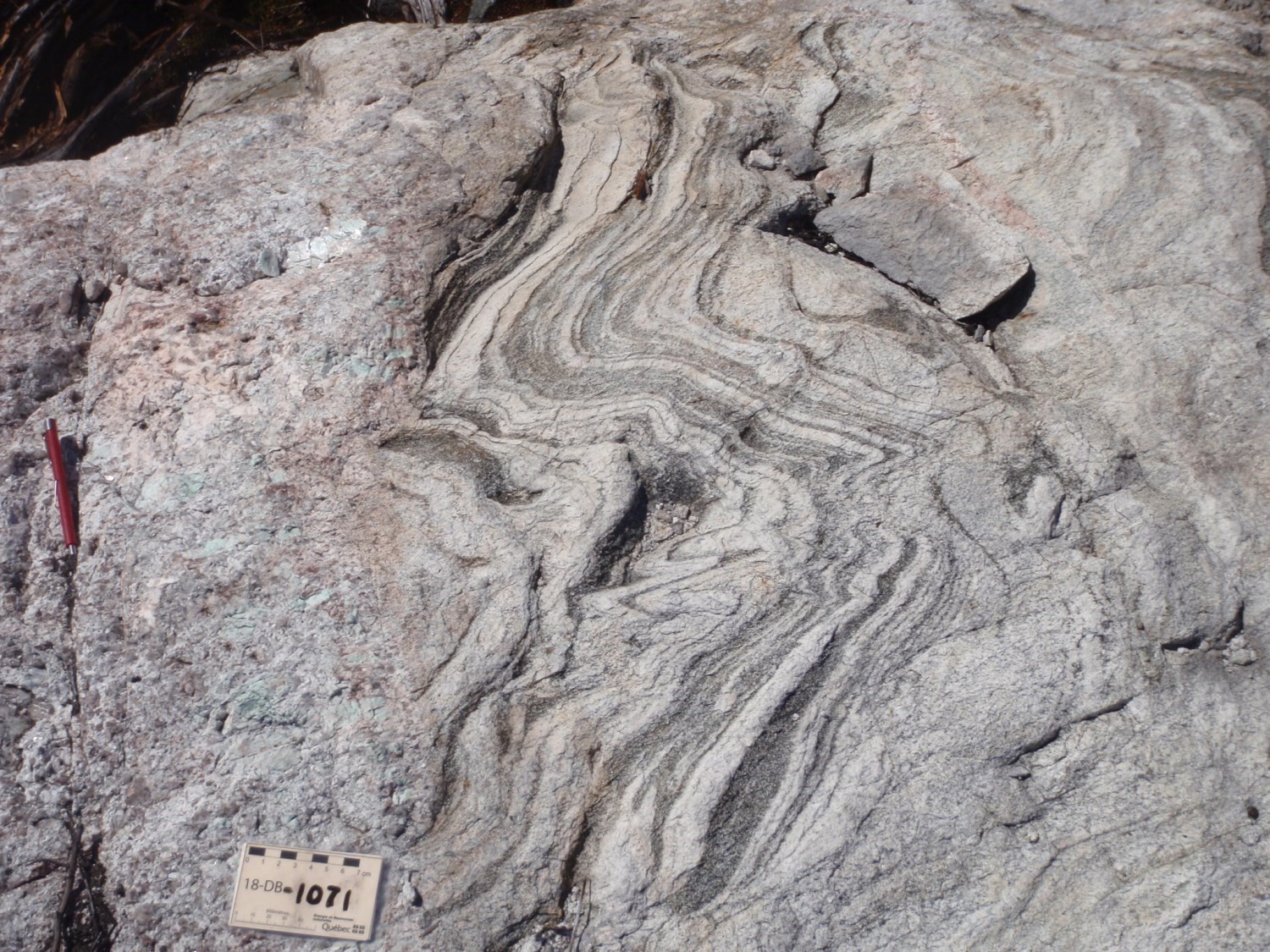 In 2010, the high-definition aeromagnetic survey commissioned by Exploration Némaska uncovered a series of concentric circular magnetic anomalies suspected of being associated with an unidentified alkaline intrusive complex (Létourneau and Paul, 2010). Drilling campaigns in 2011 and 2012 to verify these anomalies uncovered a series of mostly intermediate intrusions called the “Arques Complex” by Monarch Gold Corporation (Aubin et al., 2012). Bandyayera and Caron-Côté (2019) renamed it the “Arques Intrusion” following mapping work in the summer of 2018.

The Arques Intrusion (nArqs) is a new lithodemic unit located SW of the Glas Lake area (sheet 32O12). It was emplaced in the contact zone between the La Grande and Nemiscau subprovinces, separated from each other by the Rupert River Shear Zone. This intrusion is associated with a strong magnetic anomaly that allows the 8.9 km by 5.5 km ellipsoidal intrusive mass to be delineated (D’Amours, 2011). Its geophysical signature is characterized by a series of concentric circular magnetic anomalies which seem to indicate the coalescence of several intrusive telescopic phases, the composition of which is mainly intermediate. However, the geology of the intrusion is not well defined as it is mostly covered by a peat bog and only its margin outcrops.

The core’s description of the Arques polyphase Intrusion is derived from drilling data (Aubin et al., 2012), while the margin’s description is derived from surface observations made during mapping work in the summer of 2018. The main intrusive facies observed in drilling are diorite, monzodiorite, porphyritic monzodiorite, monzonite, porphyritic monzonite, monzosyenite, syenite and pink granitic pegmatite. Felsic dykes of various geometries cut intermediate facies. 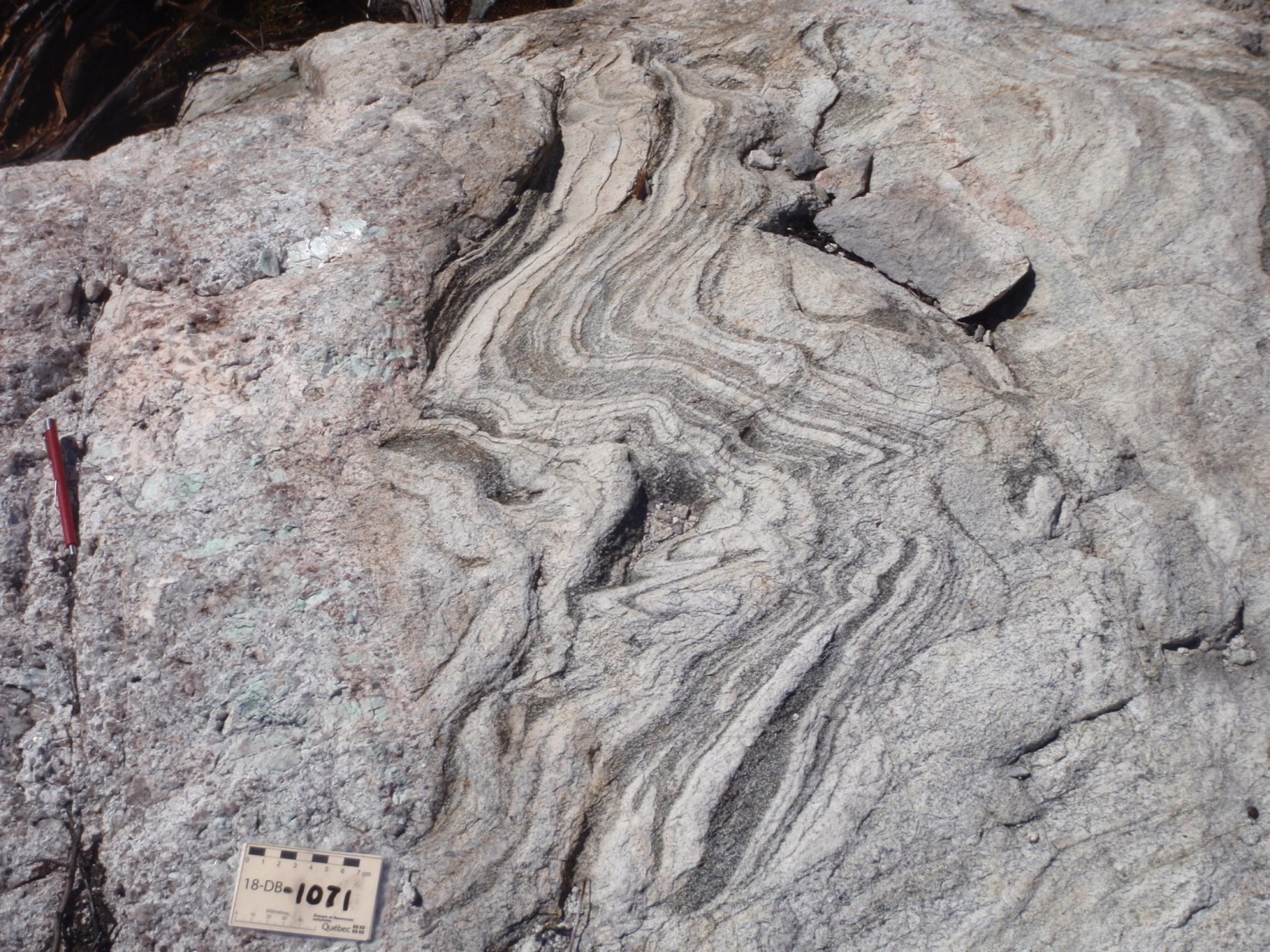 The intrusion’s margin consists of intrusive breccias cut by numerous intermediate to ultramafic dykes. To the SW, folded tonalitic gneiss is observed, intruded and brecciated by several phases of mafic and felsic intrusions. Tonalitic gneiss is generally banded, characterized by alternating tonalite, diorite and granodiorite bands. The first intrusive phases, consisting of gabbro or tonalite, are subparallel to foliation planes of the tonalitic or amphibolitic host rocks. They are highly deformed, foliated to gneissic, and locally banded and folded. 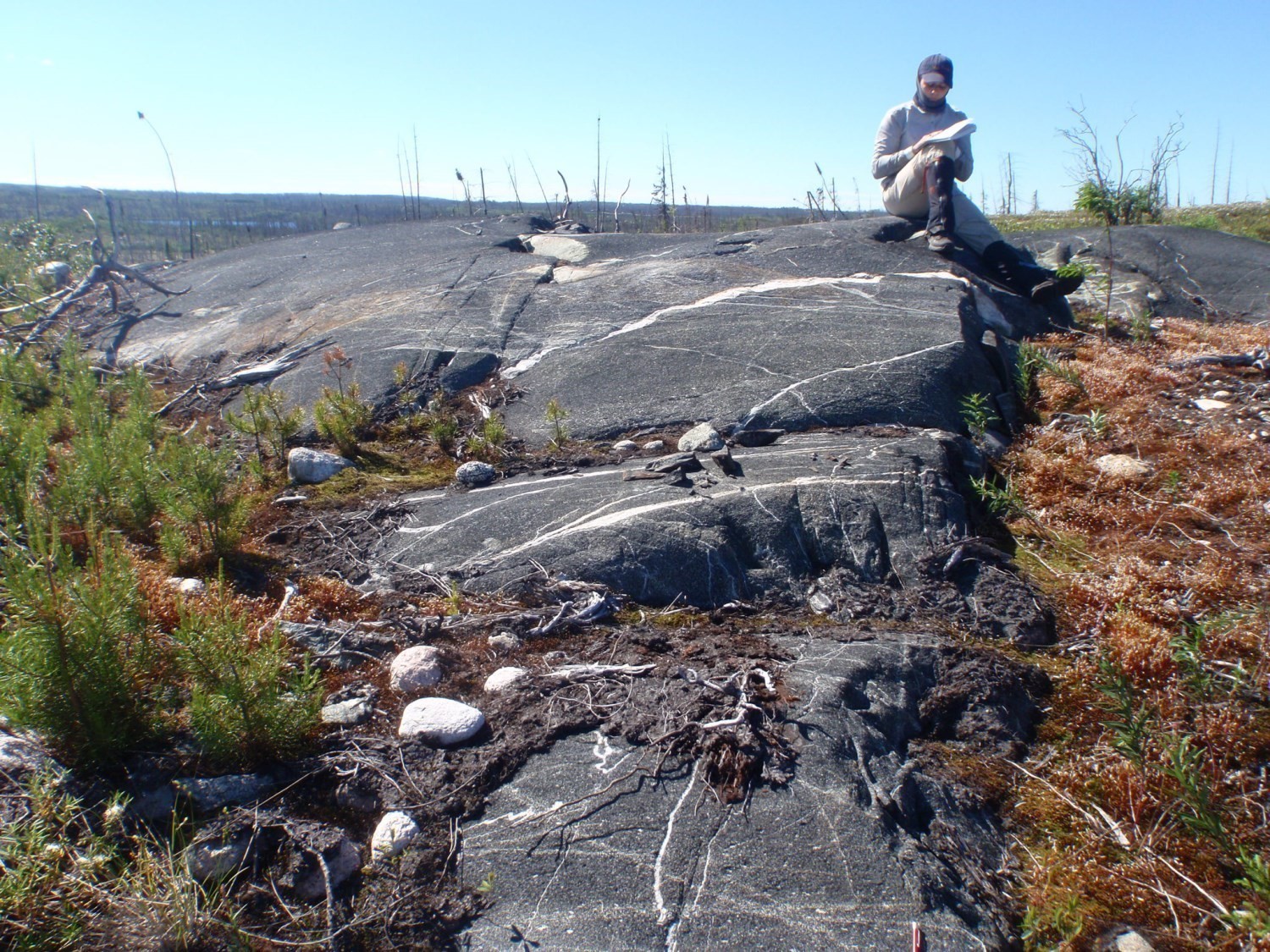 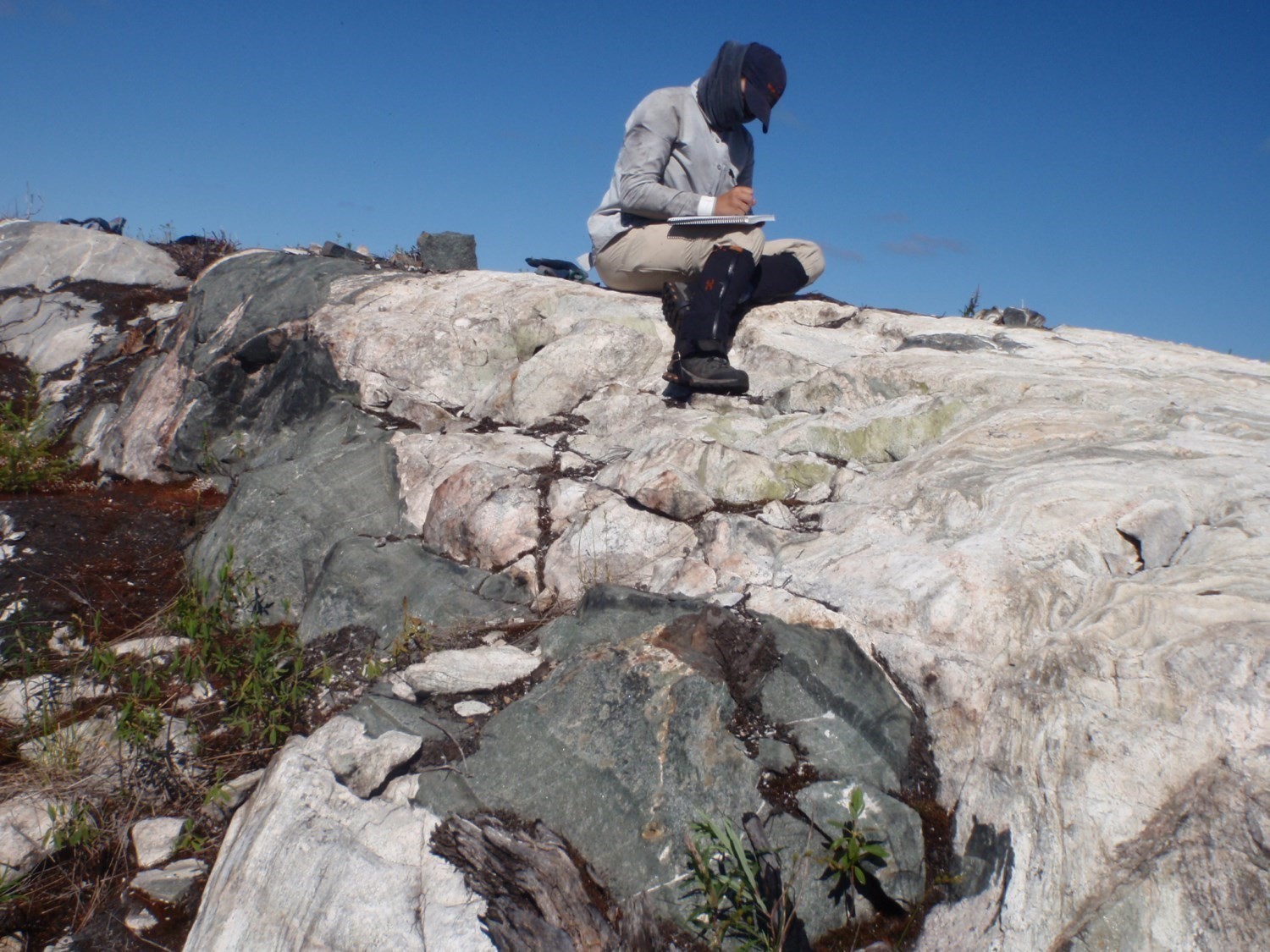 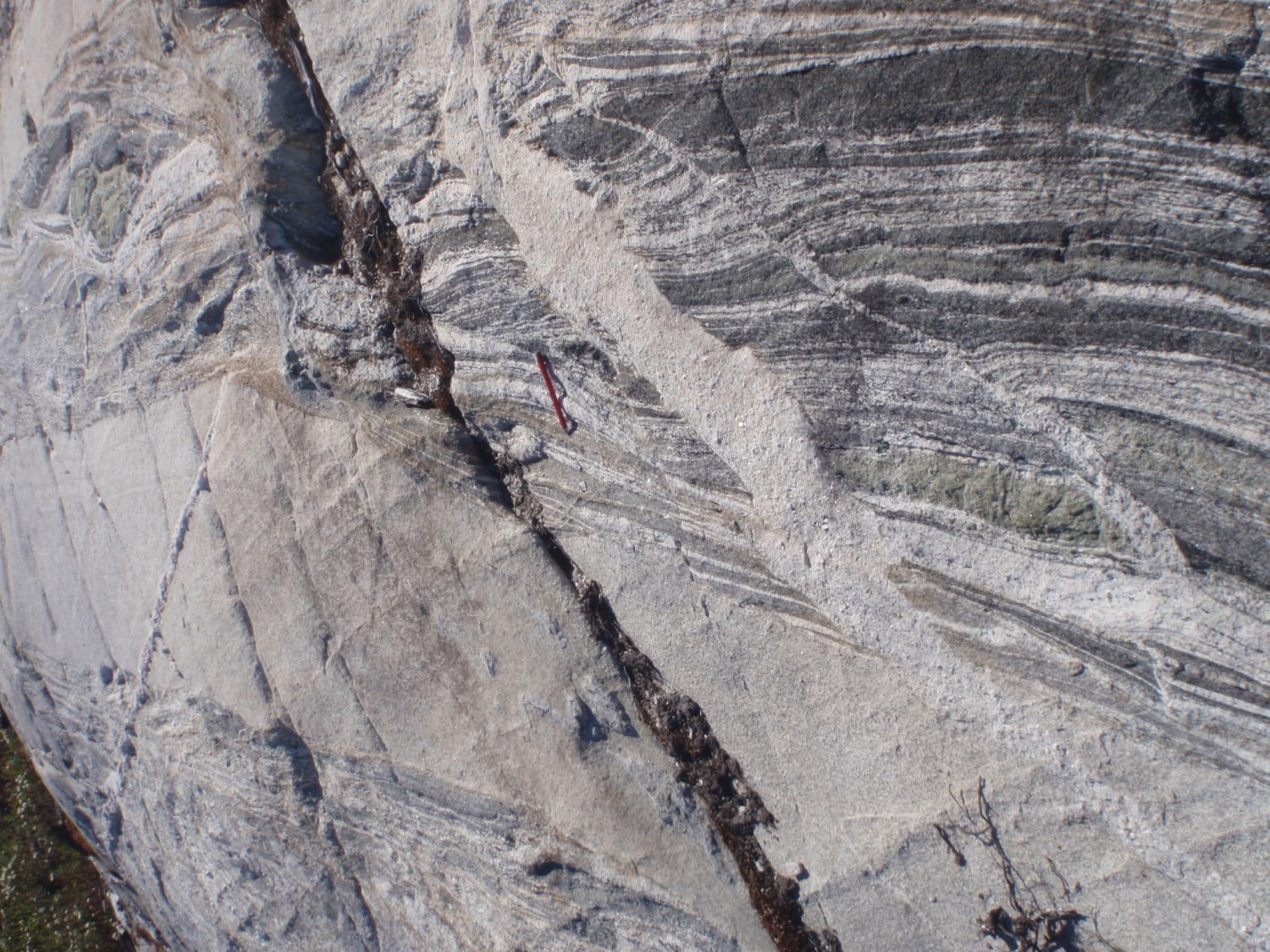 Pyroxenite boudins are found in the tonalitic gneiss and amphibolite deformed assemblage. This assemblage, which also contains early mafic and felsic intrusions, is in turn intruded by a multitude of multi-generational felsic dykes that form large intrusive breccia areas. These intrusive phases include a foliated porphyraceous granodiorite containing centimetric deformed K-feldspar phenocrystals. In the NW section, the intrusion’s margin is dominated by intrusive breccias of intermediate composition. The latest generation of felsic injections is represented by massive and homogeneous quartz-K-feldspar porphyritic dykes. 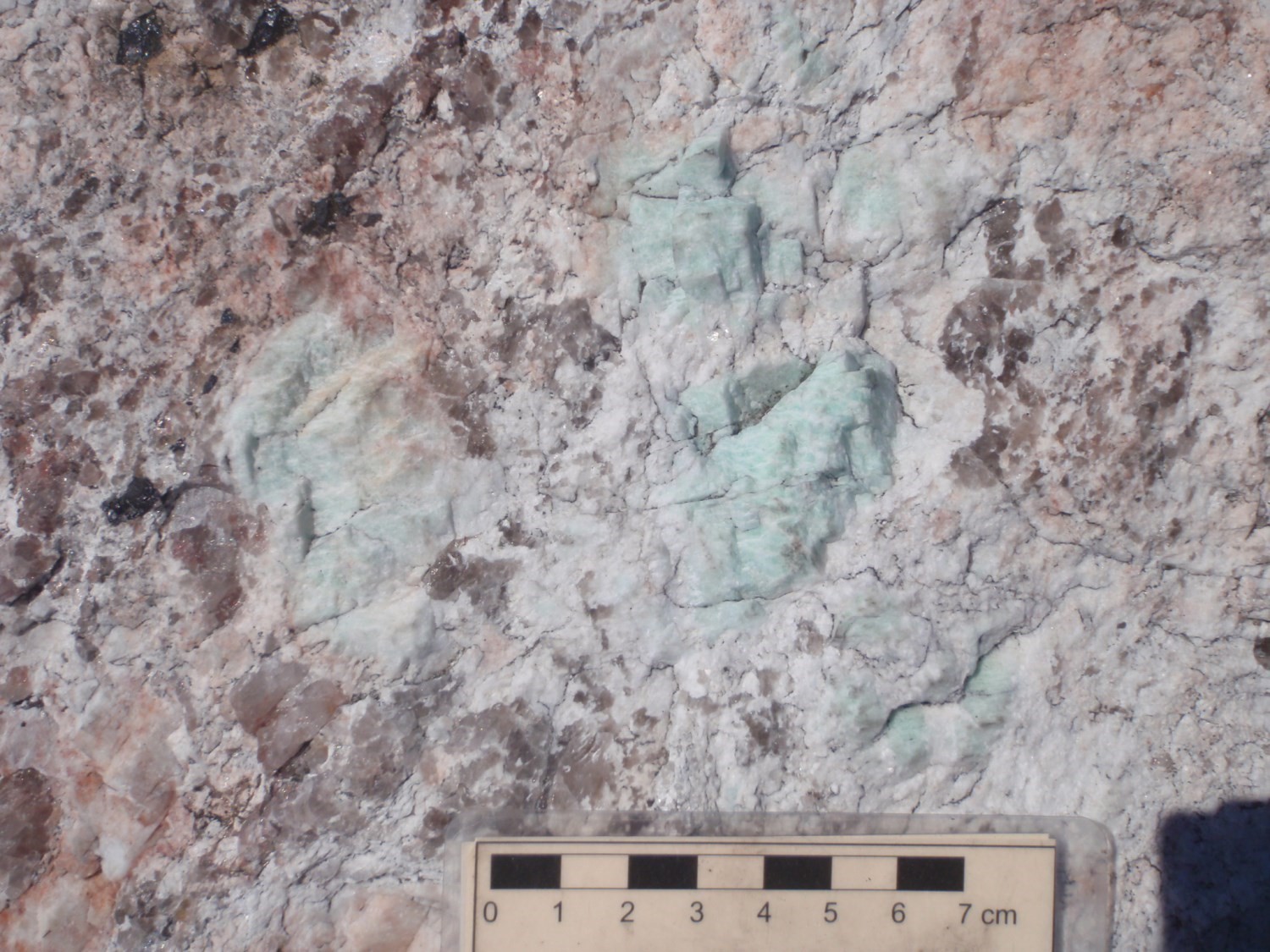 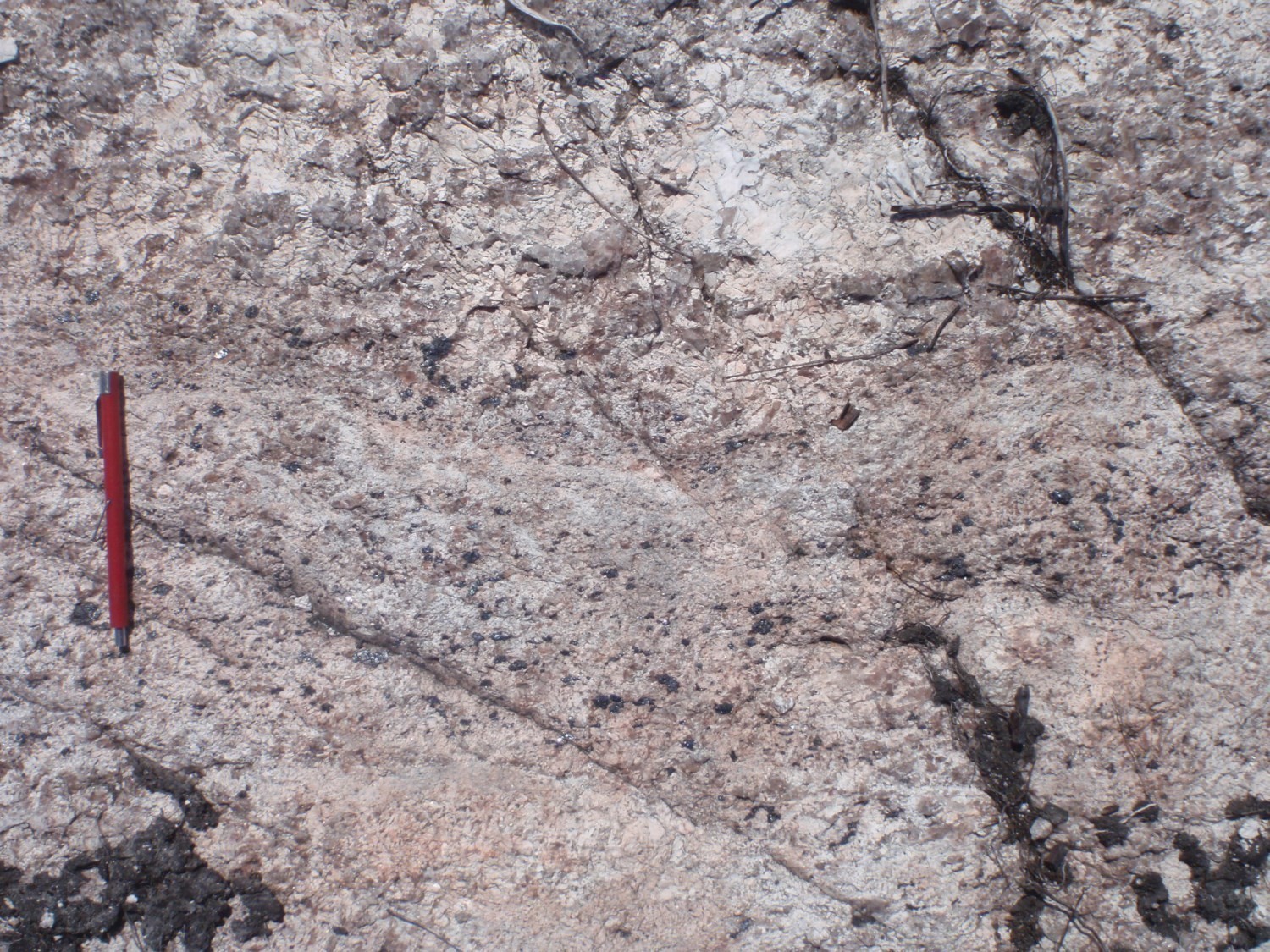 The Arques Intrusion is cut by hectometric intrusions of pink magnetite-amazonite granitic pegmatite, massive and locally layered, containing 2-5% tonalite or tonalitic gneiss enclaves. Amazonite (1-10%) is generally observed near the contact between pegmatite and pyroxenite, or at the contact between pegmatite and tonalitic gneiss containing boudinaged enclaves of ultramafic rock. Amazonite crystals reach 10 cm. Magnetite is generally disseminated in the pegmatic mass as clusters or subhedral grains (0.5-2 cm). In places, it is preferentially concentrated in granite horizons of layered pegmatite. The thickness of magnetite layers ranges from a few centimetres to a metre, while the magnetite content ranges from 3 to 15%.

The Arques Intrusion is an ellipsoidal intrusive mass; it has a NE-SW oriented long axis (8.9 km), parallel to the Rupert River Shear Zone. The short axis (5.5 km) is oriented NW-SE.

The Arques Intrusion was emplaced in the contact zone between the La Grande and Nemiscau subprovinces, separated from each other by the Rupert River Shear Zone. It cuts tonalitic gneiss of the Champion Complex, paragneiss of the Voirdye Formation and late-tectonic intrusions of the Kaupanaukau Suite.