Through their regional mapping surveys, Weber and Latulippe (1964) were the first to describe volcanic rocks in great detail at scale 1:24 000, and on an essentially lithodemic basis. These volcano-sedimentary units were previously included under the general designation of the “Keewatin” type (Weeks, 1935, 1937).

The first mention of the name “Lac Arthur Formation” in the geological nomenclature is attributed to Labbé (1994). At that time, this author had begun mapping the vast Amos-Barraute area, which included an update of the work of Weber and Latulippe (1964), the geological synthesis of Imreh (1984) and the work of Otis and Béland (1986). In this initial version of Labbé (1994), the Dalquier group was created. The latter was introduced informally, with the aim of characterizing lithological units previously associated with the Amos Group (Imreh, 1984; Otis and Béland, 1986), but with geochemical characteristics different from basalts of this group. The Dalquier Group consisted at that time of two distinct stratigraphic units: the Jonpol rhyolite and the Lac Arthur formation.

Labbé (1995) later redefined the Dalquier Group into two informal formations with distinct geochemical affinities: 1) the La Morandière formation, a basal unit that outcrops mainly in the half-centre of sheet 32C12 and consists mainly of basalt of tholeiitic affinity; and 2) the larger Lac Arthur formation (Labbé, 1994), consisting mainly of calc-alkaline andesite. The Jonpol rhyolite is then incorporated into the Lac Arthur formation.

In a synthesis of his work, Labbé (1999) proposes new formal stratigraphic subdivisions, identifying two distinct groups, the Lac Arthur and La Morandière groups, which were previously assigned as formations within the Dalquier group (Labbé, 1995). The name “Dalquier group” was then abandoned. 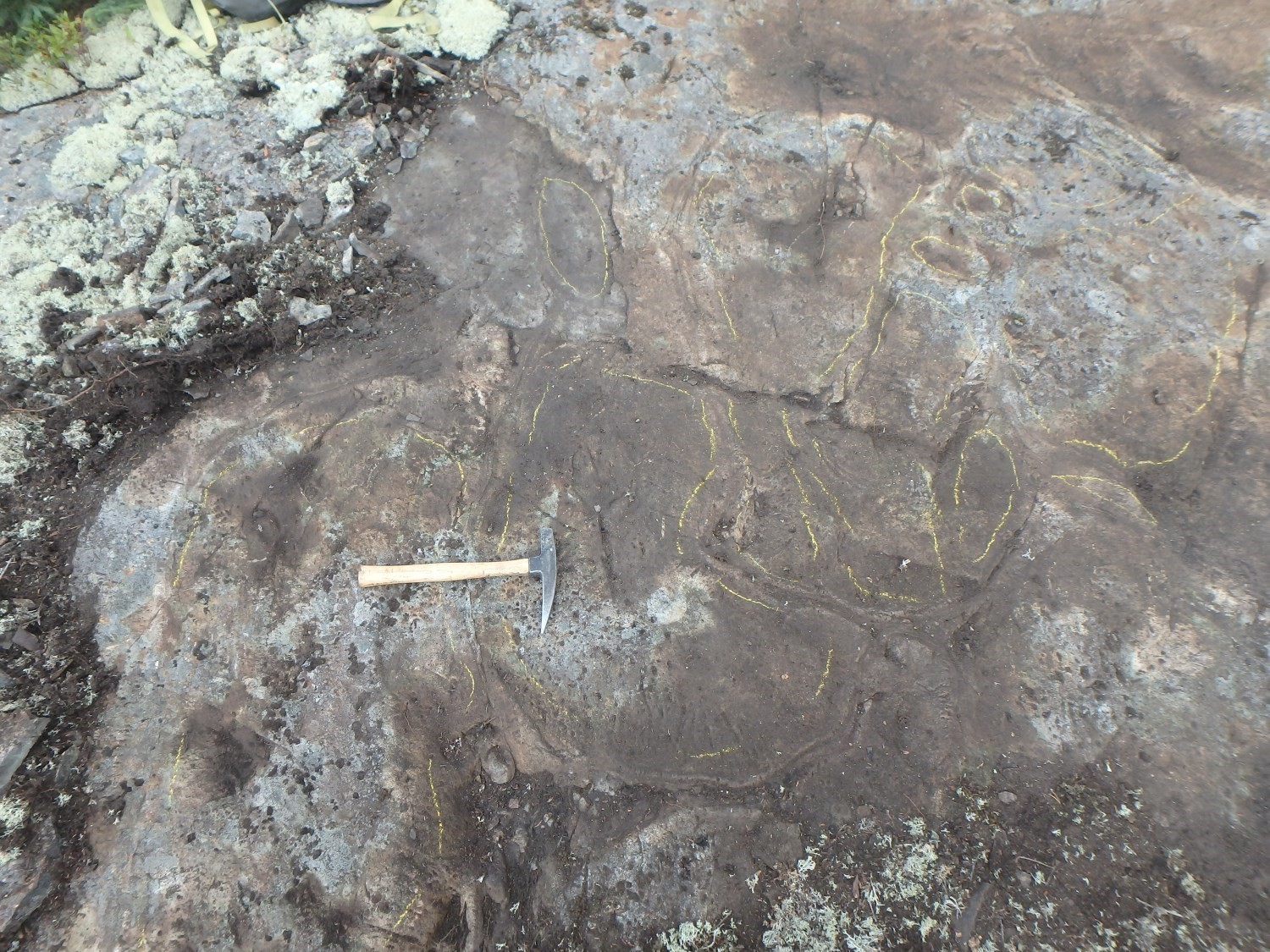 This is the unit covering the largest area of the Lac Arthur Group. It mainly occupies the central parts of sheets 32C12-SE, 32D09 and a narrow part of sheet 32C11. It consists mainly of calc-alkaline, aphanitic andesitic flows exhibiting massive, pillowed and brecciated morphofacies. Individual flows reach an average thickness of 4 m to 10 m. The pillowed morphofacies is the most abundant, pillows are not very flattened, voluminous and can reach 2 m to 3 m in length. Amygdules are filled with quartz. They are abundant (3-6%) and their diameter is variable (2-4 mm). Flows are oriented E-W to WNW-ESE and have a dip varying from 60° to 75°. The rock’s magnetic susceptibility is low and homogeneous (Geological Survey of Canada et al., 2009). The trace of the Duverny Syncline passes through the centre of this unit.

Unit nAur2 consists mainly of calc-alkaline plagioclase porphyritic andesitic flows, located inside or at the lower and upper edges of unit nAur1. The pillowed morphofacies is the most commonly observed, pillows being of comparable size (2-3 m long) to those of unit nAur1. Amygdules, on the other hand, are sparse (absent or up to 2-3%). Flows vary in thickness from a few metres to about ten metres.

Unit nAur3 includes equal proportions of intermediate to felsic volcaniclastics (50%) and andesitic flows (50%). Volcaniclastics generally occur as thin layers a few tens of metres thick in sheets 32C12, 32D09, 32D15 and 32D16. These layers are commonly poorly arranged and rarely stratified or sorted. More specifically, lapilli and block tuff is characterized by rounded to subangular, millimetric to decimetric fragments of mafic, intermediate or felsic rock having an aphanitic texture, and surrounded by an aphanitic matrix (Labbé, 1995, 1998; Doucet and Dion, 1998b; this study). This matrix is composed of quartz, hornblende, carbonate, biotite and opaque minerals.

Andesite flows locally accompany volcaniclastic layers. These are massive, rarely brecciated and characterized by a green alteration patina, a pale green fresh surface and an aphanitic texture. Massive rocks display low to medium deformation. Flows vary from a few metres to about ten metres in thickness. Andesite is composed of amphibole (actinolite and very locally hornblende), plagioclase, quartz and biotite. Epidote, sphene and opaque minerals are the accessory minerals. Some samples display medium to high epidotization and highly variable chloritization.

Unit nAur6 occurs as thin layers a few tens of metres thick in sheets 32D14 (Doucet and Dion, 1998a, 1998b; Doucet, 2000) and 32D11. These layers consist of fragmentary volcanic material of intermediate composition, accompanied and/or overlain by mudstone and siltstone sequences rich in graphite and pyrite. The response of these particular sequences on electromagnetic surveys is very good (Geological Survey of Canada et al., 2009). 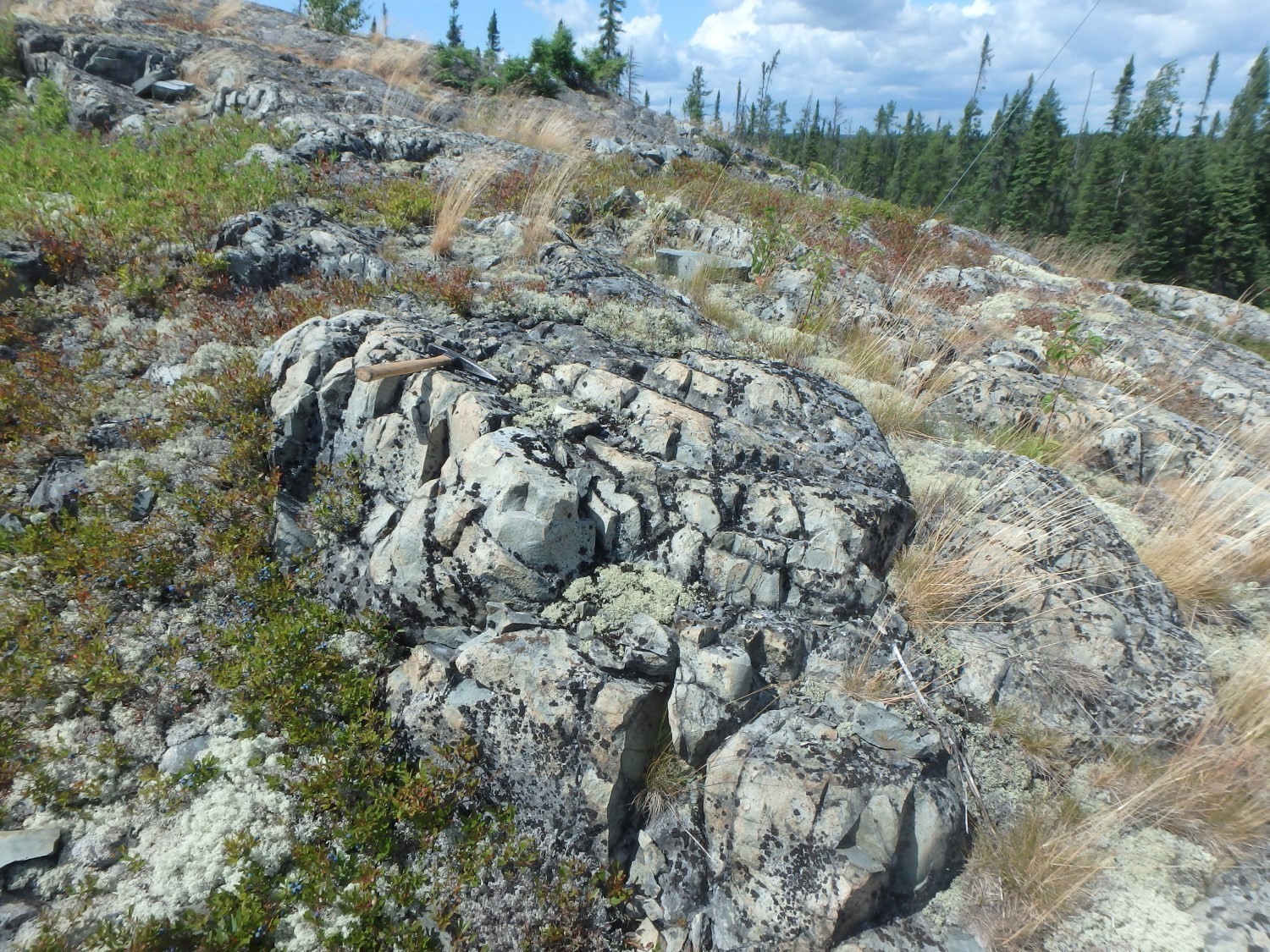 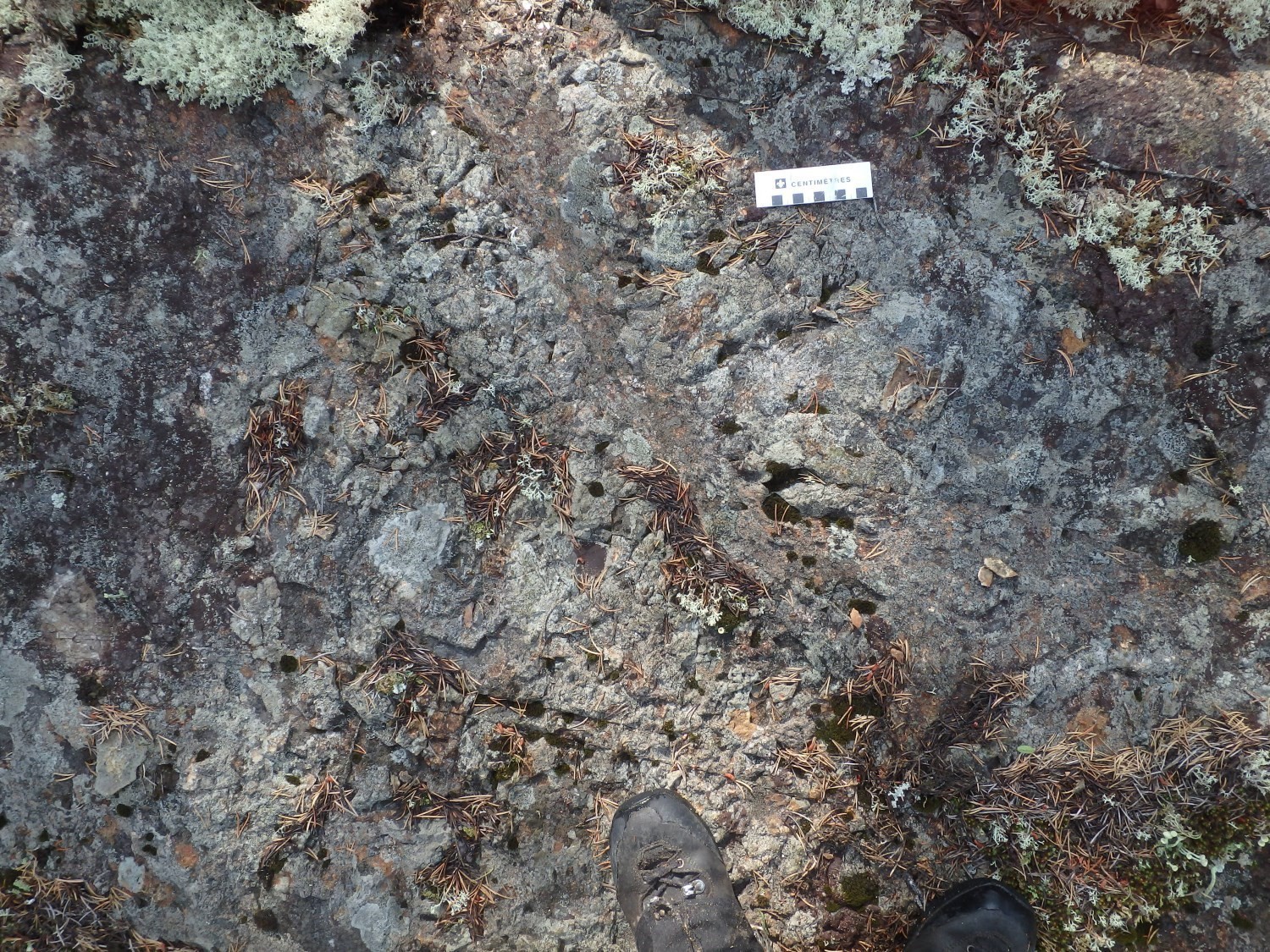 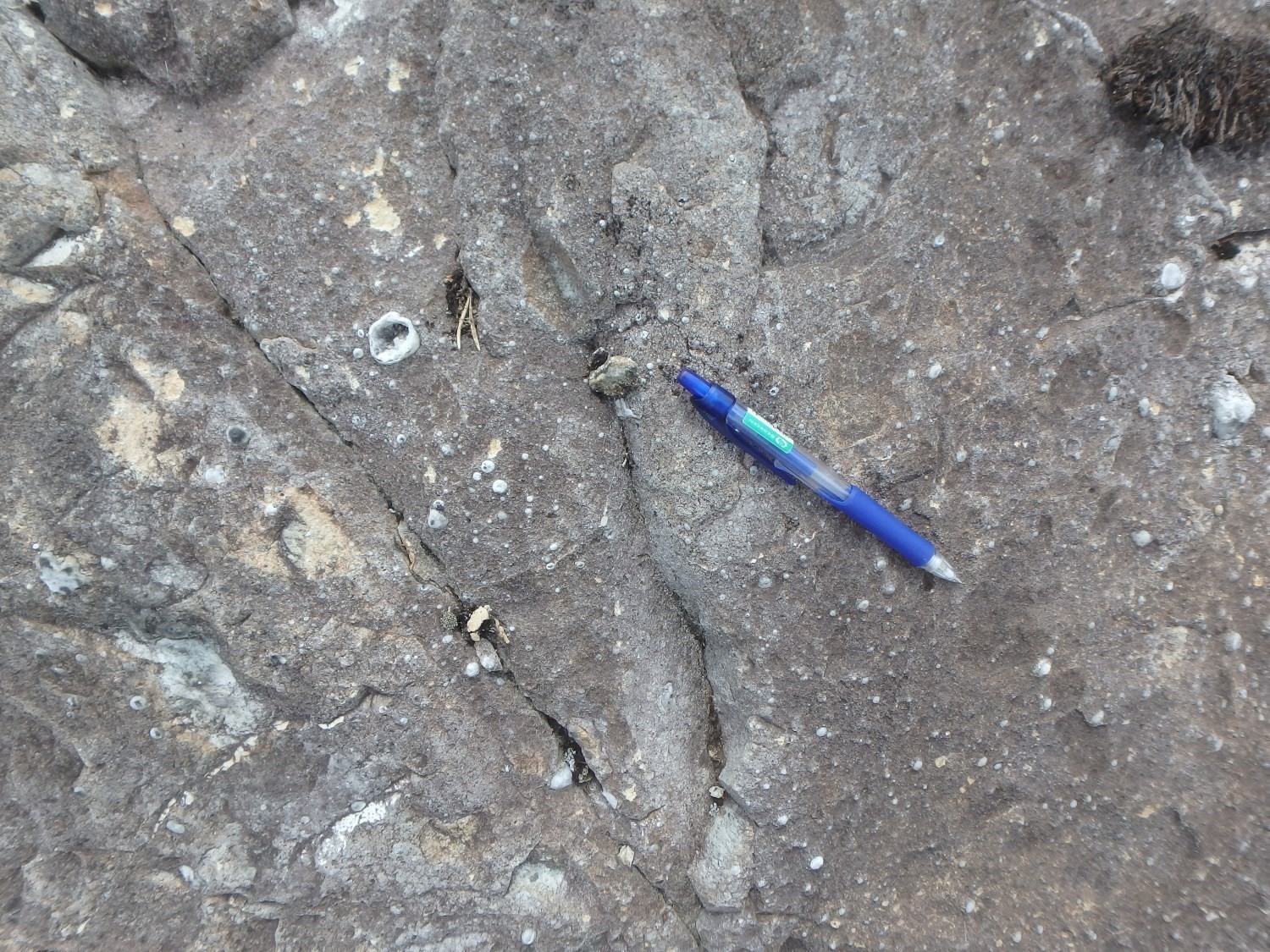 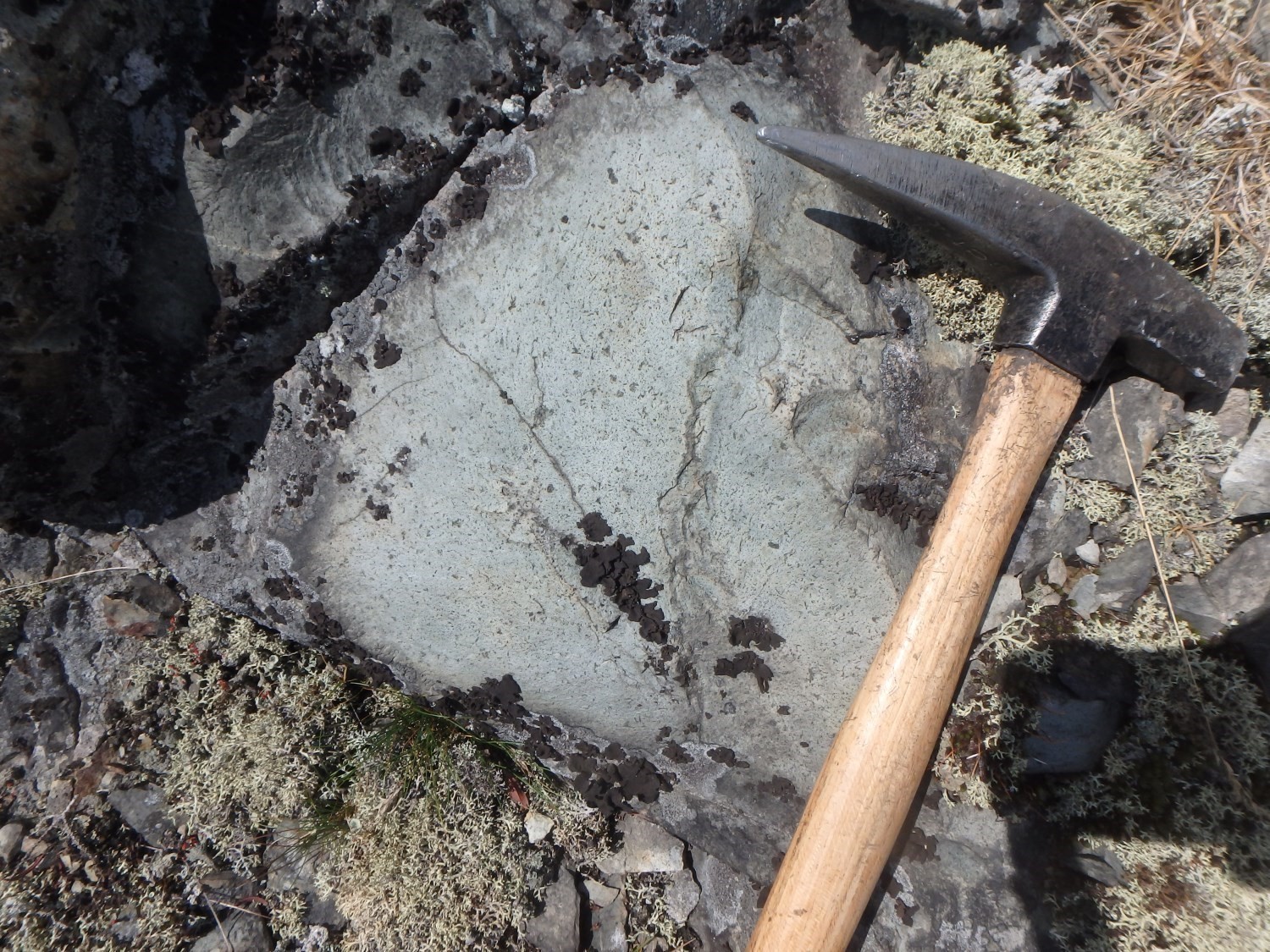 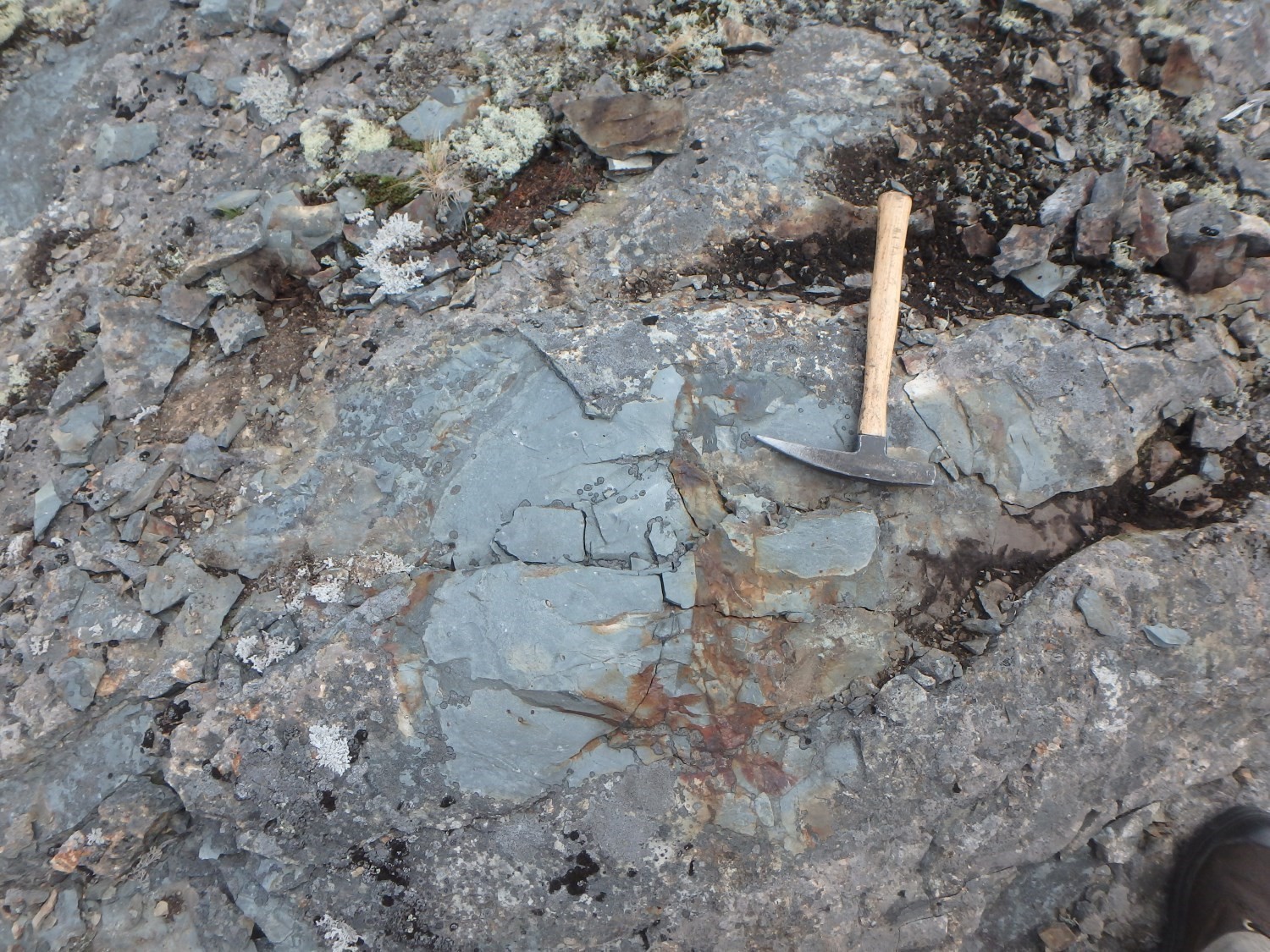 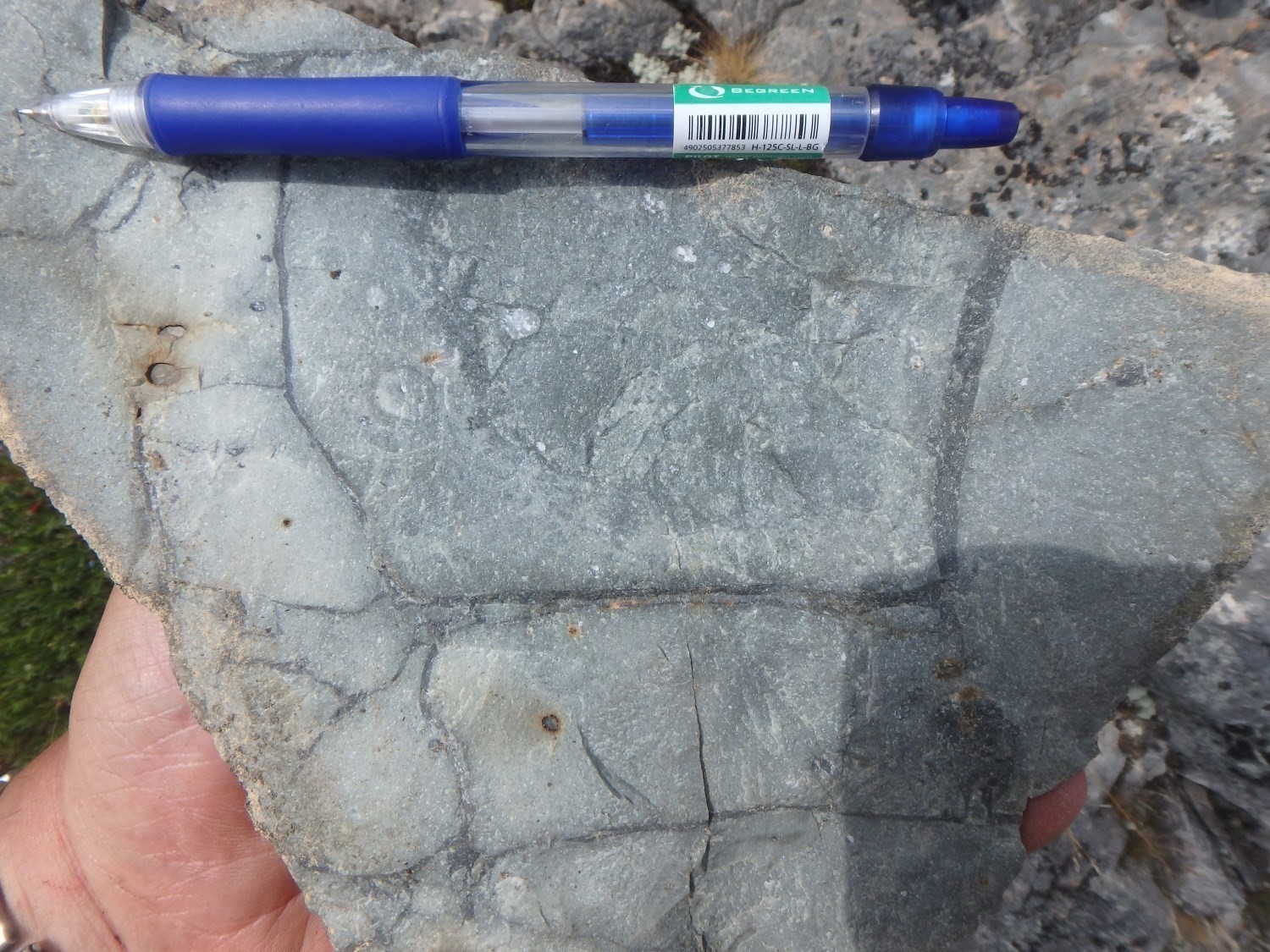 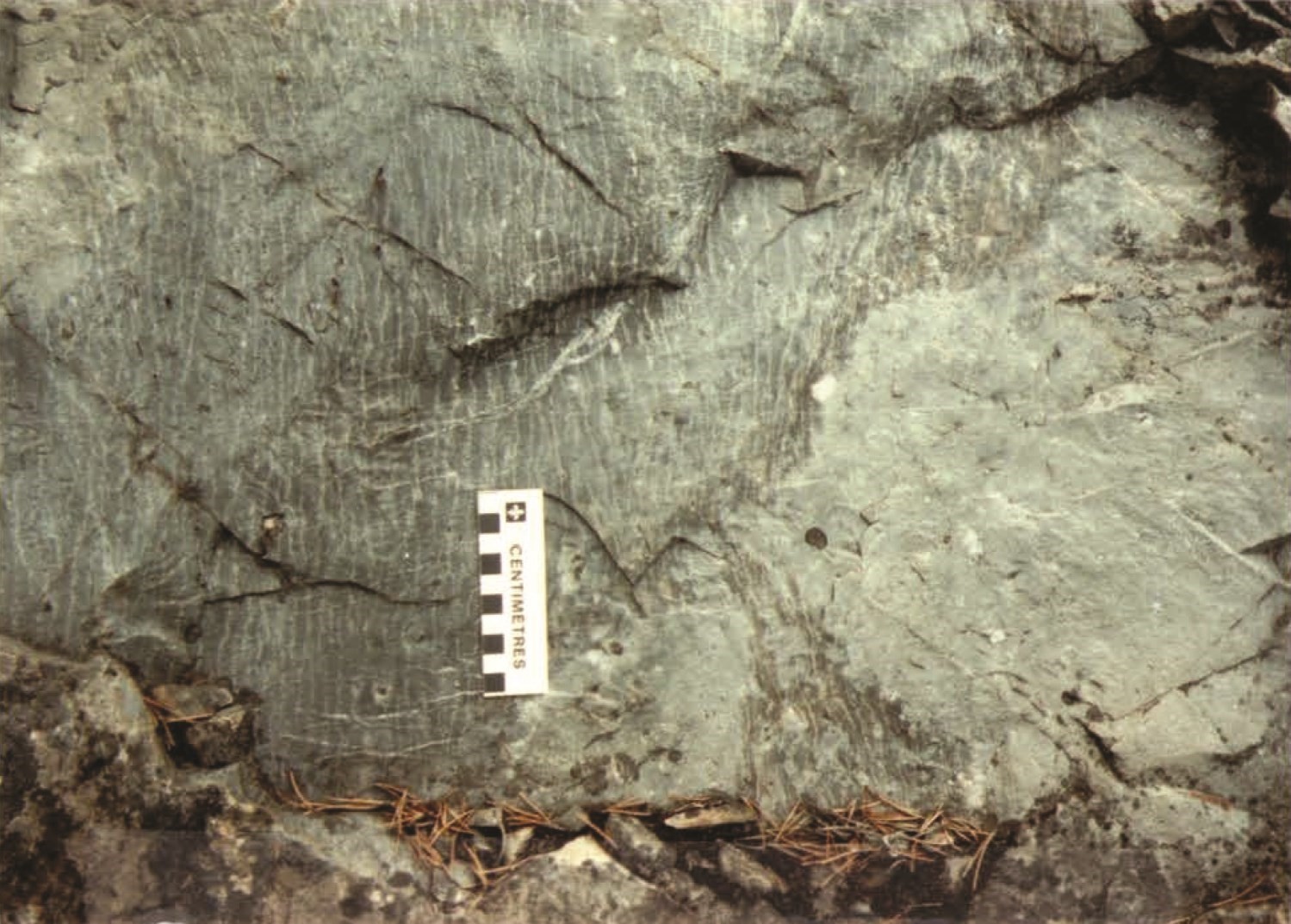 Unit nAur7 is found in sheets 32D09, 32D15 and 32D16 (Otis and Béland, 1986; Labbé, 1994, 1995, 1998). It occurs in the upper part of this group and is included in the nAur4 package. Unit nAur7 consists of plagioclase porphyritic dacite exhibiting the following morphofacies: massive, carapace breccia, lobed and fragmentary. The matrix and fragmentary material surrounding these lobes consist of hyaloclastite. Outcrops 19-PP-382 and 19-JM-582, located in the NW part of sheet 32C12-SE, are good examples.

Dacite is buff-brown to greenish white in patina and light green in fresh exposure. Some flows are vesicular (lithophysae) and amygdaloidal. Quartz amygdules can locally make up 5% (up to 30%) of the volume of the rock, their diameter varies from 2 mm to 2 cm. Another characteristic aspect of dacite is the presence of a multitude of cooling fractures subparallel to the flow surface. These fractures are filled with microcrystalline quartz, forming whitish laminae 2-3 mm thick which give a zebra-like appearance to the flow. Millimetric to centimetric vesicles locally contain pyrite. The overall dimensions of the sequences of flows and/or endogenous lobes are difficult to determine, but they are at least several tens of metres thick. The dimensions of individual lobes are 40-60 cm thick and 1-4 m long.

Otis and Béland (1986) observed the presence of thin (0.1-2 m) gabbroic dykes that cut some dacitic flows. These gabbros could possibly prove to be the feeder dykes of mafic flows overlying the surrounding dacites. Otis and Béland (1986) also observed thin (2-20 m) subconformable quartzofeldspathic porphyry dykes that intrude into dacite, mainly along the axis of the Duverny Syncline.

These characteristics, taken as a whole, allow interpreting the presence of a proximal effusive complex in this area (in the vicinity of outcrop 19-JM-582) in the NW corner of sheet 32C12-SE. Sericitization is the most common alteration, but of low intensity. Several other layers of lenticular felsic volcanic rocks, of lesser volume, are observed in this area. Unit nAur7 is affected by the Duverny Syncline.

Units of wacke and intermediate tuff are included in volcanic rocks located NE and SW of the Guyenne Batholith (sheets 32D10 and 32D15, see Doucet and Dion, 1998a). Units to the NE consist of dark laminated intermediate tuff, light grey siltstone and dark grey mudstone, generally, locally heavily,  folded and metamorphosed. There is no graphite or pyrite accompanying these lithologies. Doucet and Dion (1998a) suggest that these units could continue on the NE side of the Guyenne Batholith, since relatively comparable beds are located in the NE corner of sheet 32D10.

The Lac Arthur Group mainly occupies the central parts of sheets 32C12-SE and 32D09. It also occupies more limited areas in sheets 32C06, 32D11, 32D15 and 32D16. The maximum thickness of this group is ~6.5 km. It is globally E-W oriented, but it curves towards the SEE in its eastern extension (central part of sheet 32C12). Observed stratification is generally oriented WNW-ESE and dips steeply northward. The Duverny Syncline affects the central part of this group; it produces the duplication of felsic volcanic units on either side of the Duverny Pluton, at the boundary of sheets 32C12 and 32D09. These units are globally limited in their extents by the Lapaix Fault to the south and the Champneuf Fault to the north. It should be noted that the trace of this syncline’s axial plane is oblique with respect to the trace of these two faults.

Isotopic dating was carried out at the Geotop laboratory of the Université du Québec à Montréal. Sample AB-91-4 (outcrop 93-JY-221) comes from a rhyolitic tuff of the Lac Arthur Group collected 4 km NE of the town of Amos, within the Jonpol Deformation Corridor (Labbé, 1999). Zircons used for dating show morphological characteristics of detrital zircons. The obtained age of 2714 ±3 Ma corresponds to the maximum age of the rhyolitic tuff. The Lake Arthur Group corresponds in age to the La Motte-Vassan Formation (2714 ±2 Ma; Pilote et al., 1998, 1999, 2014; Pilote, 2000), located at the base of the Malartic Group. Felsic units of similar age (2713 ±2 Ma; Corfu et al., 1989; Ayer et al., 2002) are recognized in Ontario, south of Abitibi Lake and in the Timmins area, and occupy the top of the Kidd-Munro assemblage at these locations.