Based on their regional mapping surveys, Weber and Latulippe (1964) were the first to describe these volcanic rocks in great detail at scale 1:24 000, albeit on a mainly lithodemic basis. These rocks were previously known under the general name “Keewatin” type (Weeks, 1935, 1937).

The first mention of the name “Amos Formation” in the geological nomenclature is attributed to Imreh (1979). Between the early 1970s and the mid-1980s, numerous geological surveys by Imreh and his collaborators covering the SE part of the Abitibi region, in particular the Val-d’Or, Malartic and Amos areas, enabled him to clarify this nomenclature and form the basis for it.

In 1984, Imreh published a dissertation that summarized ten years of reflection on the volcanology, stratigraphy and metallogeny of the La Motte-Vassan furrow and adjacent territories. Concerning the Barraute-Amos area, he introduced the names “Harricana Group” (which originally included the Landrienne, Lower Figuery and Upper Figuery formations), “Lower Amos formation” and “Amos Group”. Regional mapping continued along this stratigraphic scheme with the work of Otis and Béland (1986) in the Senneterre-La Morandière-Rochebeaucourt-Carpentier area (sheets 32C12 and 32C11).

Labbé (1994, 1995), during his mapping work in the Amos area, proposed abandoning the name « Harricana Group », because the two stratigraphic units historically involved (Figuery and Landrienne; Imreh, 1982) have very distinct geochemical affinities and are separated by major fault zones (Abcourt and Lyndhurst faults). Labbé (1994, 1995) also established the use of the term Amos Group. This appellation is used and kept here. The designations “Lower and Upper Amos formations” and “Lower and Upper Amos groups” are abandoned.

The Amos Group occupies the central part of sheet 32C12-SE. It crosses the study area from east to west. It consists mainly of a monotonous sequence of basalts commonly pillowed, locally interstratified with differentiated mafic-ultramafic sills composed of peridotite and gabbro, among others. All these sills represent multiple intrusions of magma. The stratigraphic polarity of these rocks is systematically northward. Rocks are metamorphosed to the greenschist facies. The contact between the Amos and Figuery groups, on the south side, is interpreted as a fault. The northern contact, between the Amos and Lac Arthur groups, is occupied by the Lapaix Fault. 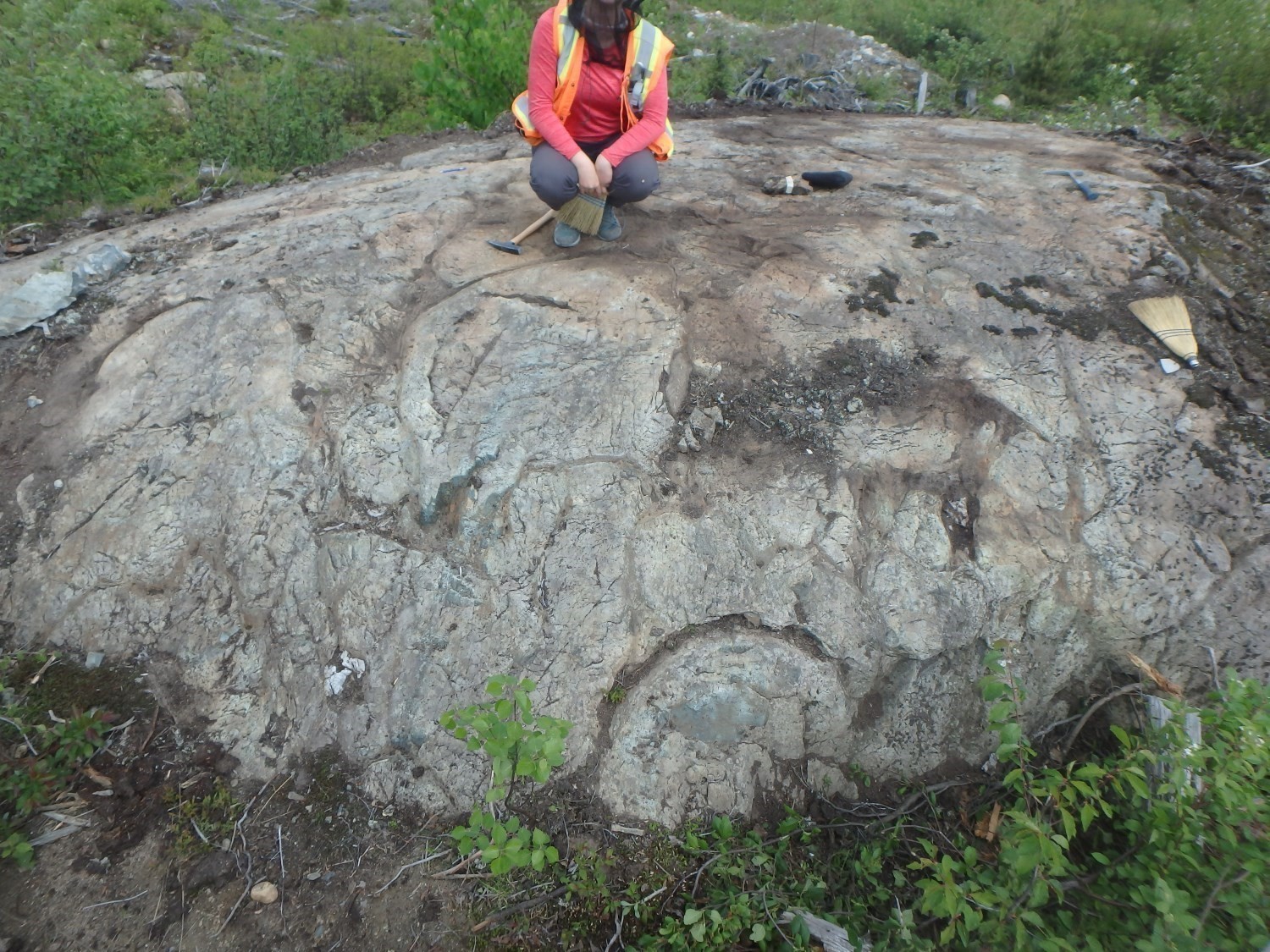 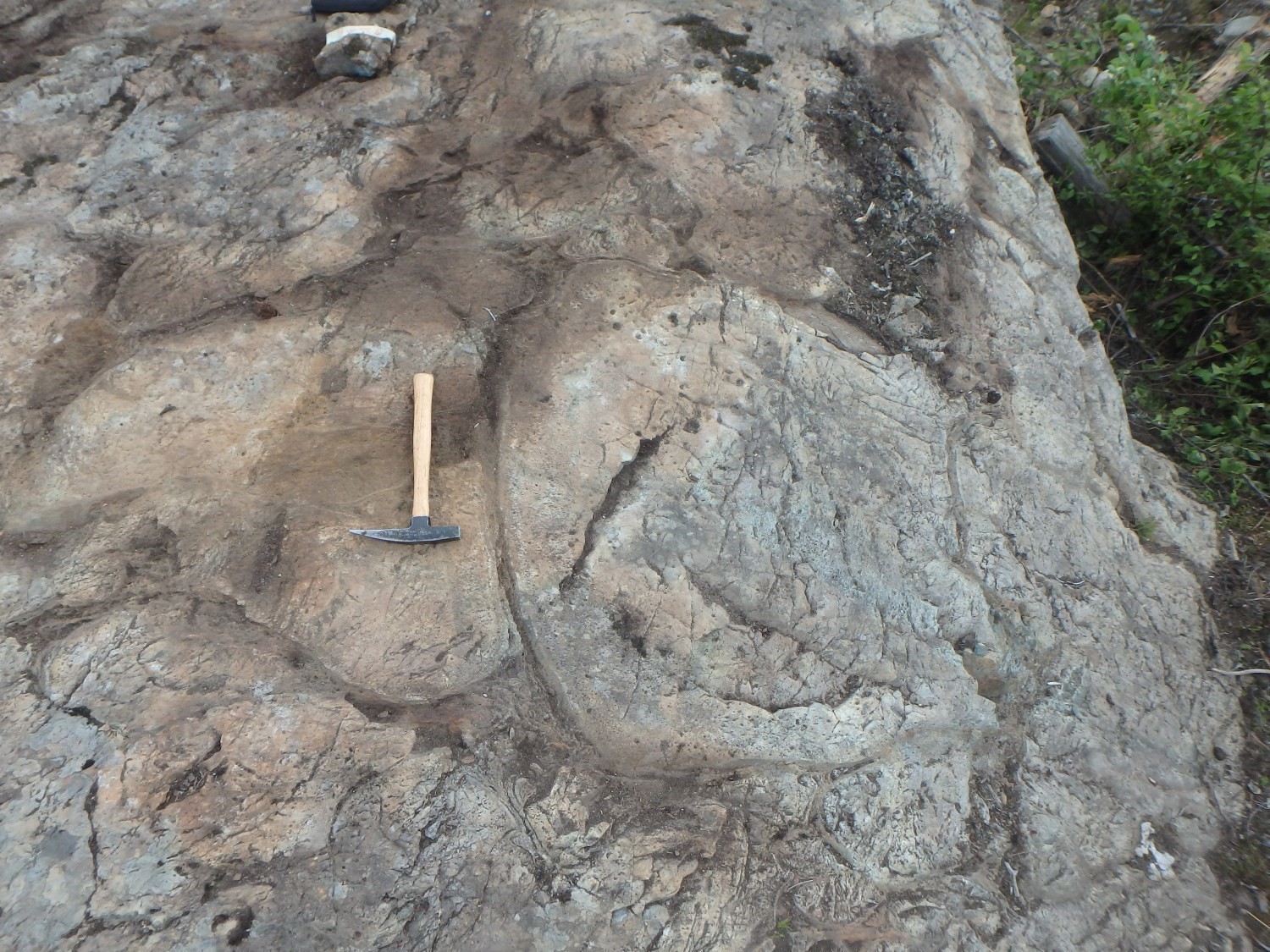 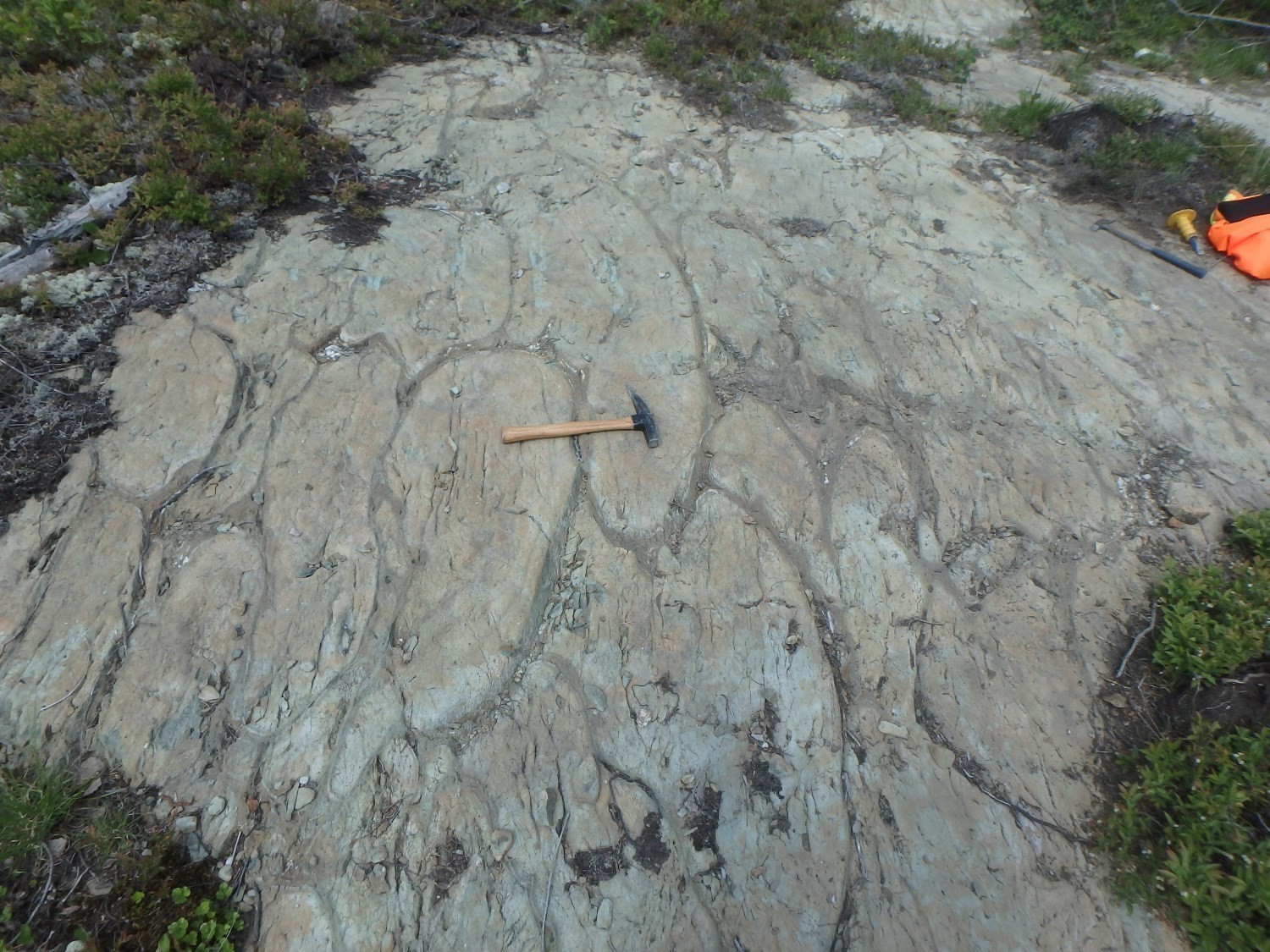 Individual flows reach an average thickness varying from 5 m to 15 m. The pillowed morphofacies is the most abundant: pillows are slightly flattened, of average size (<1 m up to 1.5 m in diameter) and commonly vesicular in their upper dome, which contributes to the development of robust polarities. These pillows have thin chilled margins (~1-2 cm thick). Pyrite accumulations are common between the pillows. Basalt layers are oriented E-W to WNW-ESE and have a dip of 60° to 75° northward with normal polarities. Their magnetic susceptibility is homogeneous and low (GSC et al., 2008). Metric parasitic Z-shaped folds are observed in the vicinity of the Paradis Quarry (outcrops 19-PP-326 and 19-PP-327) and continue laterally over several hundred metres. 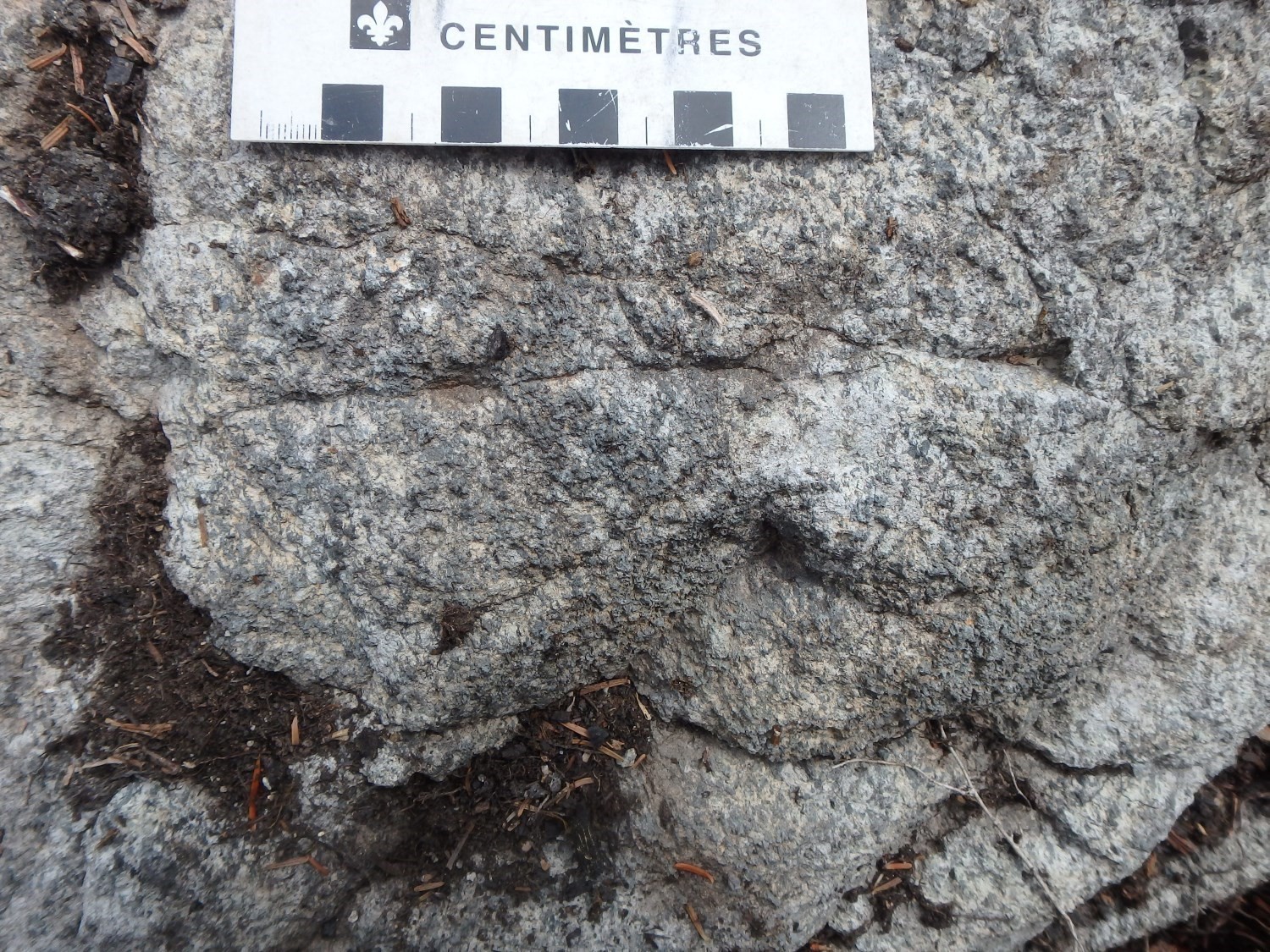 Gabbro sills are evenly distributed throughout the Amos Group. They are thin and relatively homogeneous in appearance. Their thickness is on the order of a hundred metres. Although their magnetic susceptibility is highly variable, it is generally higher than that of adjacent volcanic units. The rock is composed of millimetric hornblende and plagioclase. The northern part of the sills is commonly slightly richer in quartz, indicating a northward magmatic polarity, which is consistent with that observed in basaltic flows. 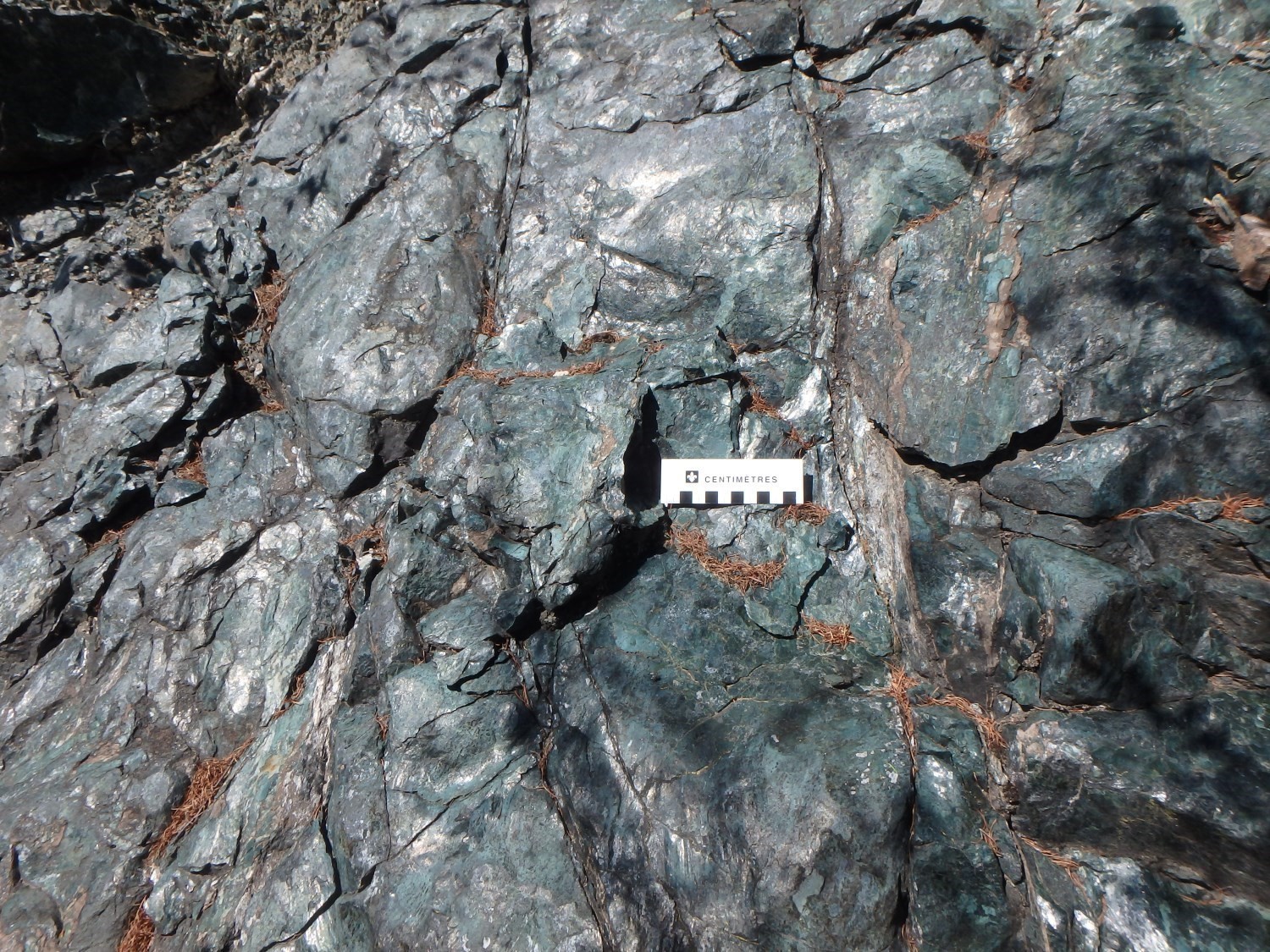 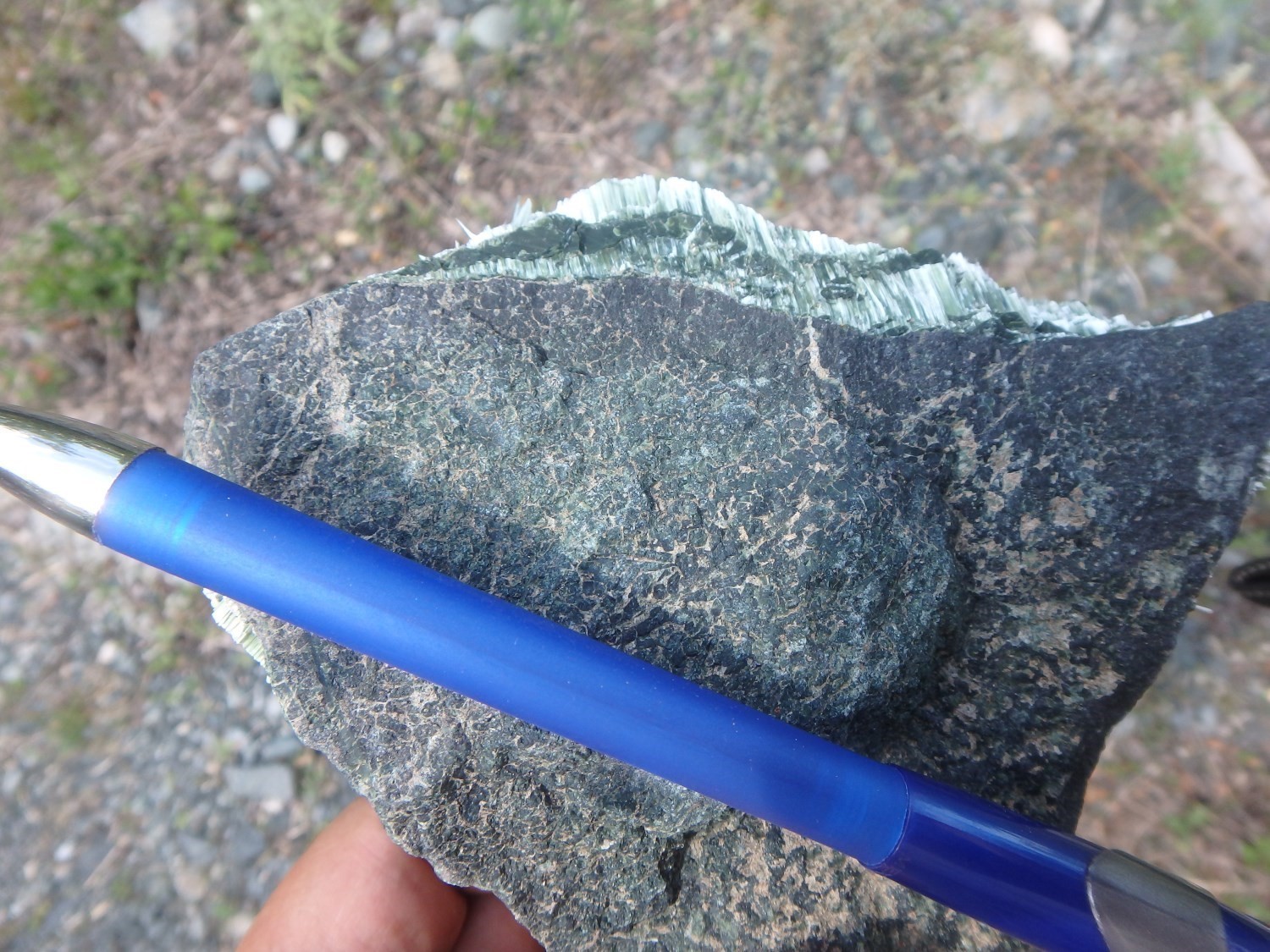 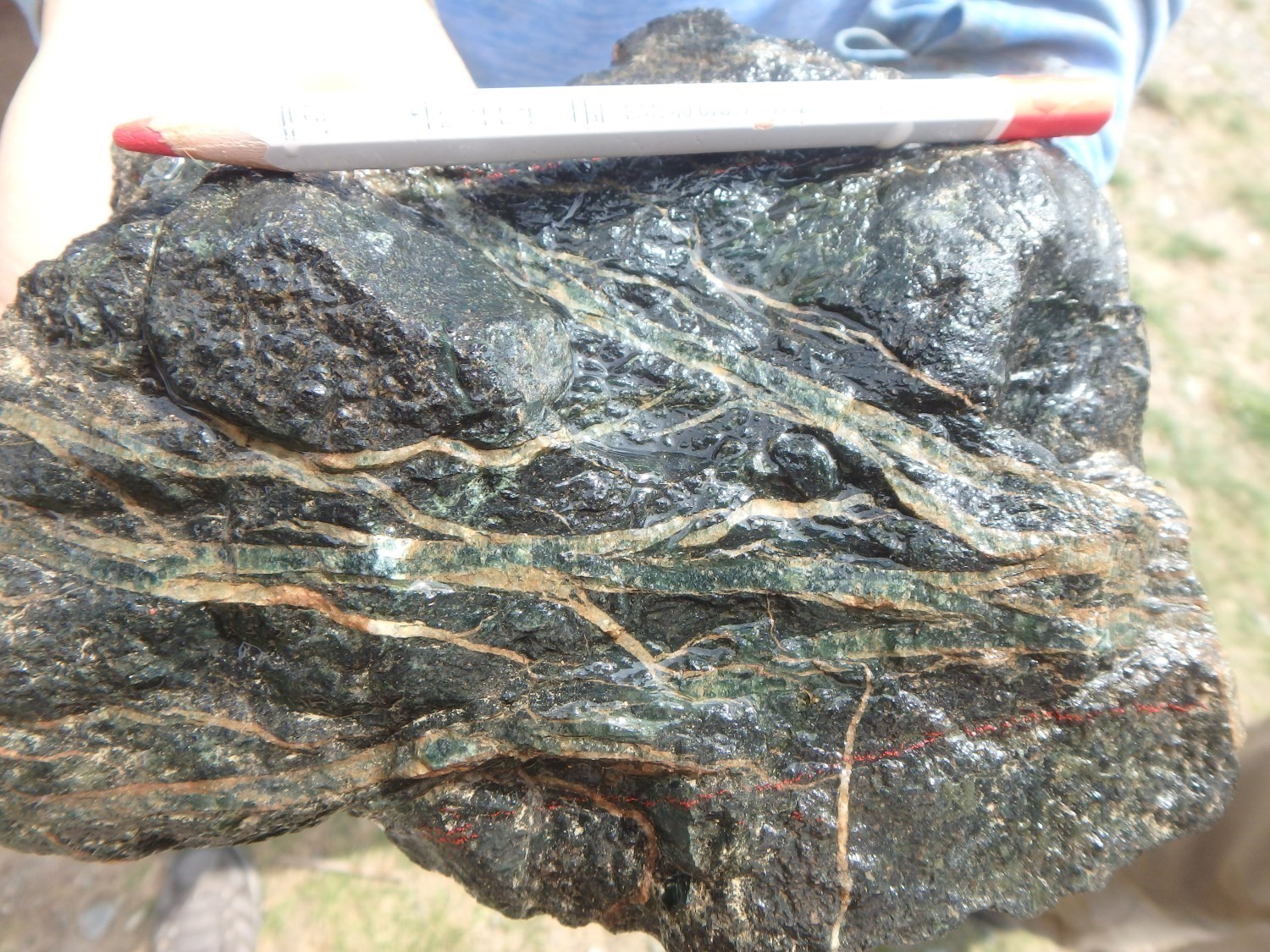 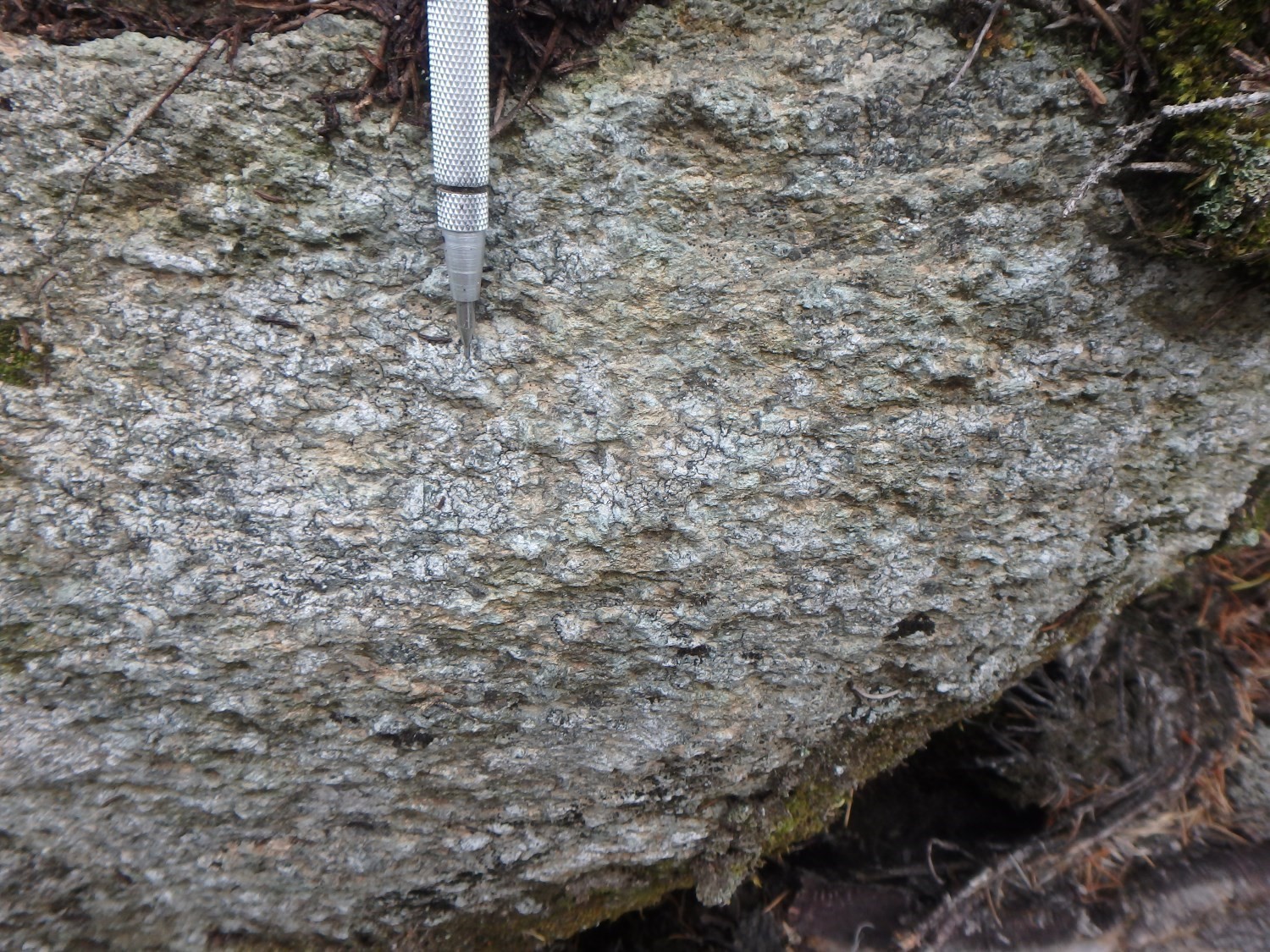 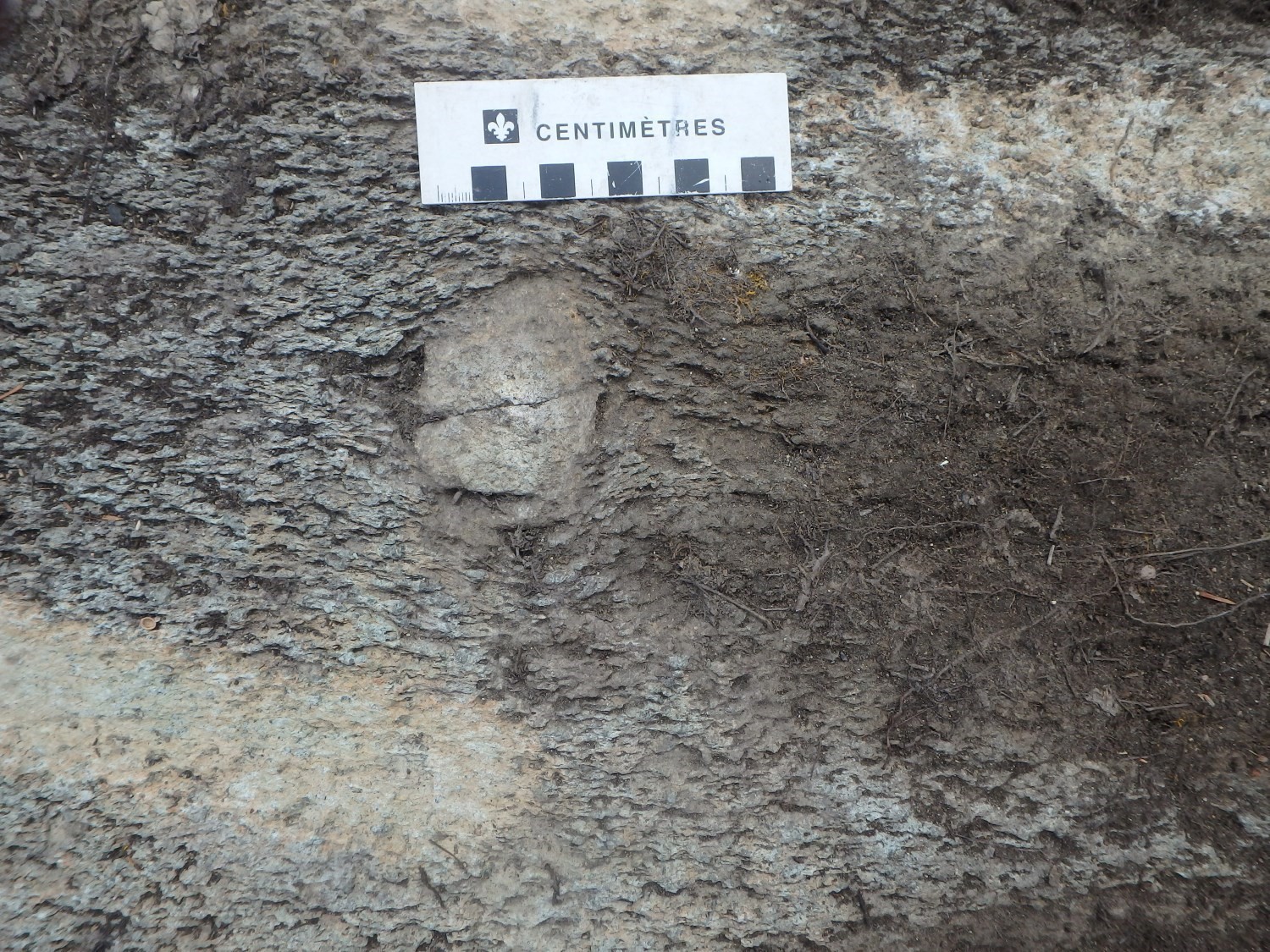 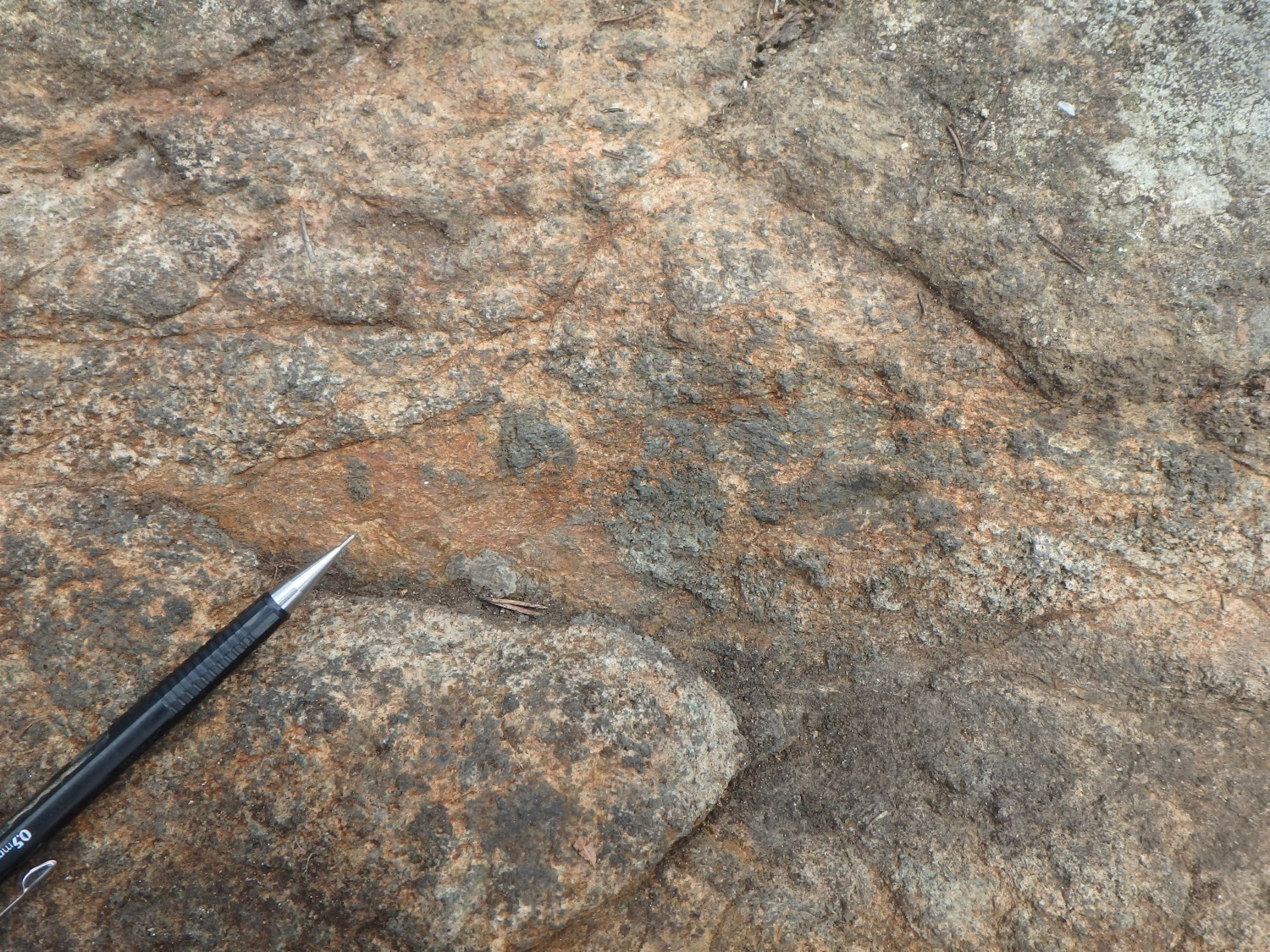 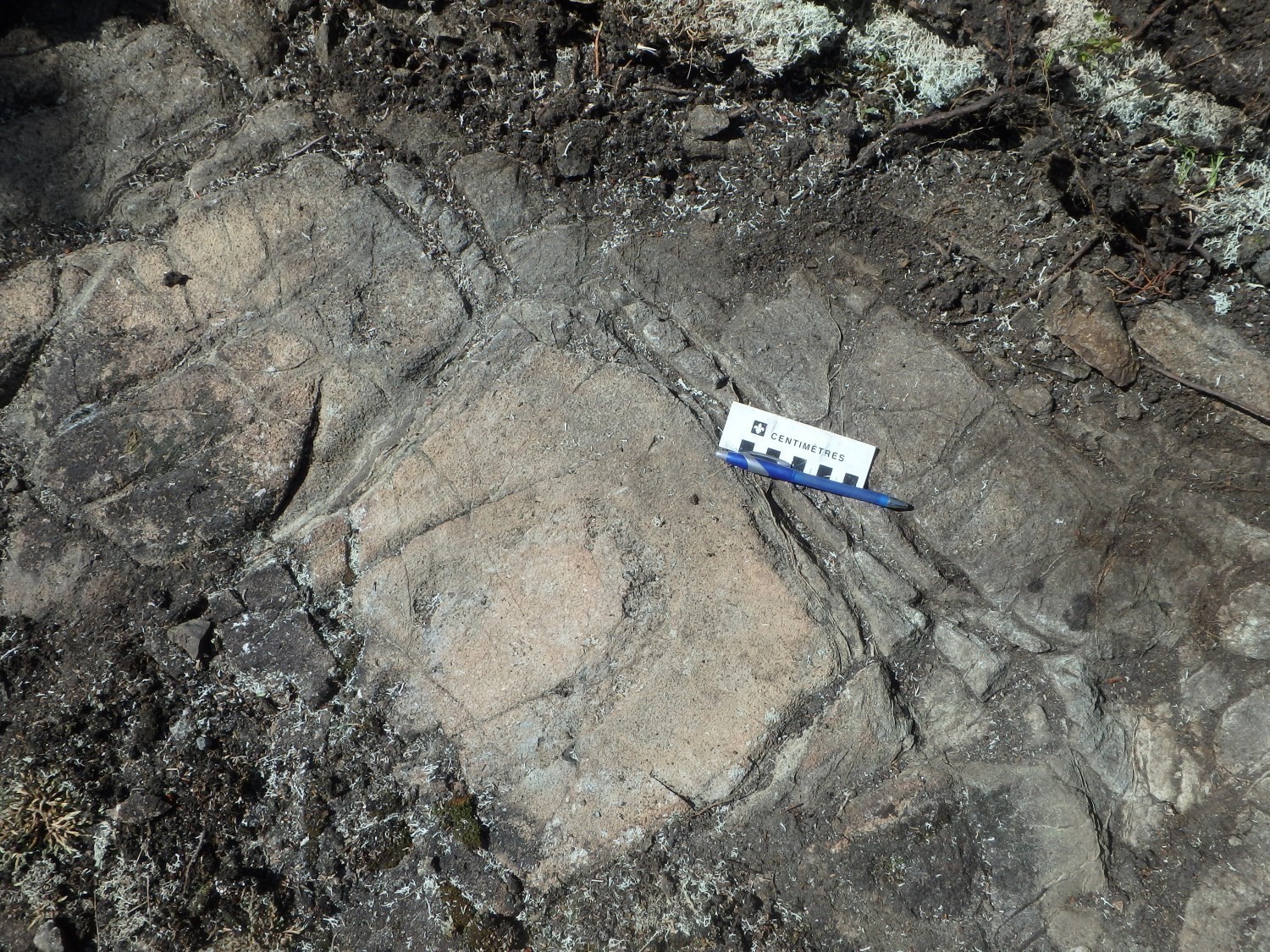 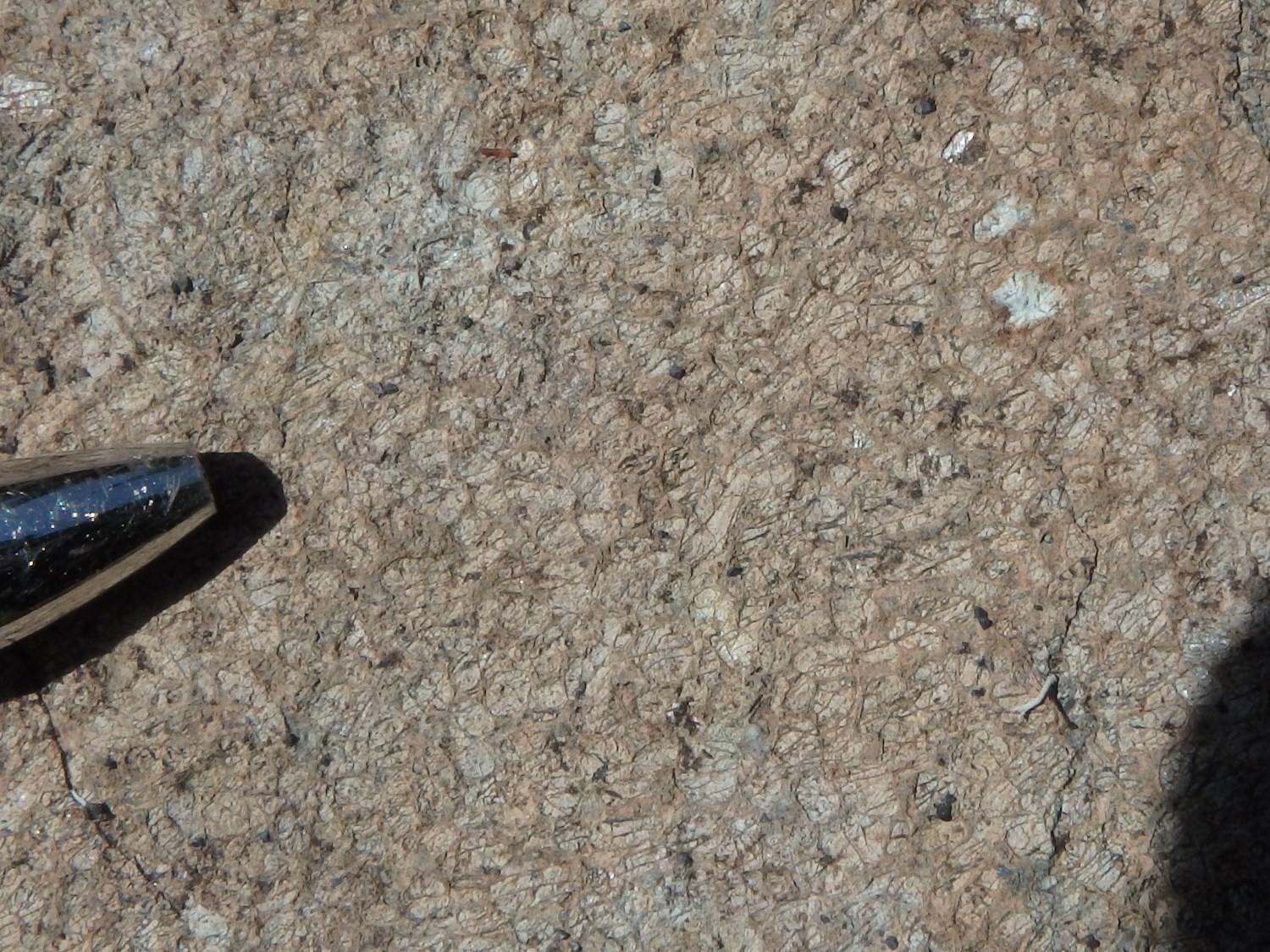 This unity is, by its abundance and regularity, one of the most characteristic features of the Amos Group. It consists of voluminous, differentiated, banded ultramafic sills having a local poikilitic texture and being subconformable to regional stratification. Their apparent thickness varies from 500 m to almost 1000 m. They are distributed over the entire surface area of this group and occupy different stratigraphic positions: in sheet 32D09 NW of the village of Trécesson (nickel-bearing Dumont sill [see Duke, 1986; Oswald, 1988; Cloutier et al., 2014; Staples et al., 2019]), at the border of sheets 32D09 and 32C12 (Amos sill [Hébert, 1982]), in sheet 32C12 (Bolduc sill – informal name proposed by Labbé [1994] and host of the Canadian Bolduc asbestos mine), and in sheets 32C11 and 32C06. Two of these sills, the Amos and Bolduc sills, probably developed along the same graphite-pyrite tuff layer located within the basaltic sequence. The edges of these sills outcrop only exceptionally (see Labbé, 1994), but are commonly observed in drilling (Evelegh and Somanchii, 1962; Canadian Johns-Manville Co Ltd, 1974; Crépeau, 1983). It should be noted that the Swanson gold deposit occurs in this unit as well as in adjacent basalts (nAam1).

In the case of the Amos and Bolduc sills, they exhibit at least two differentiated intrusion phases expressed by a double peridotite-gabbro alternation. The Bolduc sill hosted the Canadian Bolduc Mine, operated from 1974 to 1977 by the Johns Manville Company. It produced nearly 15 000 t of asbestos fibres. Another voluminous sill, located ~1.5 km NE of the Bolduc sill, also features multiple gabbroic and peridotite intrusions, but does not contain serpentine-rich zones (Lebel, 1988). These lithologies display a well-defined magmatic foliation due to the preferential orientation of plagioclase. No magmatic layering is recognized (which could be suggested by closely alternating ultramafic-mafic layers).

The magnetic susceptibility of these sills’ ultramafic phases is very high and allows visualizing the traces and extents of these units on aeromagnetic surveys (Johnson, 1990; GSC et al., 2009). On the other hand, the magnetic susceptibility of gabbroic phases is very low, comparable and indistinguishable from that of adjacent basaltic units. Drilling observations are then necessary to determine the extent of interstratified gabbroic phases associated with these ultramafic intrusions.

The Amos Group contains numerous tuff beds, remarkably continuous from east to west over several kilometres, the entire length of the study area. The thickness of these tuff layers varies from 1 m to >10 m. They are composed of varying proportions of fine-grained felsic volcaniclastic material. These layers are commonly stratified and very well foliated. They are rich in graphite and pyrite. These tuffs are commonly cut by ultramafic-mafic intrusions (unit nAam3) and are also observed as klippes within these different intrusive phases.

Tuff layers are particularly well illustrated on airborne geophysical surveys by a series of INPUT-type electromagnetic anomalies (Evelegh and Stewart, 1963; Johnson, 1990; GSC et al., 2008). They form several regional lineaments indicating either stratigraphic markers or important longitudinal faults with throws that are difficult to quantify, or both. The presence of these tuff layers has been observed at several drilling sites on either side of the Amos and Bolduc sills (Bourassa and Lavertu, 1956; Avramtchev and Lebel-Drolet, 1981; Labbé, 1994, 1995; Eustache, 2012).

The Amos Group occupies the central part of the study area and spans it from east to west. It is a homoclinal sequence with northern polarity. Its thickness of ~3 km is very regular, except in the eastern direction, where the Castagnier Fault gradually truncates volcanic units. This group continues in sheets 32D09 and 32D10 to the west, and sheet 32C011-32C06 to the east. Units are in fault contact with the Lac Arthur Group to the north and the Figuery Group to the south.

The Amos Group is bordered to the north by the Lac Arthur Group (Labbé, 1994, 1995) and to the south by the Figuery Group. The southern limit of this segment of Archean volcanic rocks is bordered by the regional Beauchamp Fault (Labbé, 1995) and, to the north, by the Lapaix Fault (Labbé, 1995). All these lithologies are oriented along a general WNW-ESE axis and a steep dip northward. The absolute age of the Amos Group is unknown, but it can be assumed that the age of neighbouring volcanic groups (in particular the 2714 Ma age of felsic volcanic rocks of the Lake Arthur Group; Labbé, 1998) could be a plausible estimate.