The current Figuery Group occupies the southern portion of the Taschereau-Amos-Senneterre Archean volcanic rock segment (Faure, 2016). Webber and Latulippe (1964) were the first to map in detail (1:24 000 scale) the various volcano-sedimentary and intrusive lithologies making the eastern portion of this segment, particularly in the Amos area. At that time, no formal formation names had been proposed; volcanic units were then known as Keewatin (Wilson, 1938; Tremblay, 1950).

The first mention of the term “Figuery” should be attributed to Imreh (1979). Between the early 1970s and the mid-1980s, numerous geological surveys by Imreh and collaborators covering the southeastern part of Abitibi (particularly the Val-d’Or, Malartic and Amos areas) formed the basis for initially proposing the formation terms « Lower Figuery », « Middle Figuery » and « Upper Figuery » (Imreh, 1979). They then proposed to include the new Figuery and Landrienne formations in the Harricana Group.

In 1982, Imreh published a memoir summarizing ten years of reflection on the volcanology, stratigraphy and metallogeny of the La Motte-Vassan trough. He then retained only the formation titles « Lower Figuery » and « Upper Figuery », which remain combined with the Landrienne Formation to form the Harricana Group. Regional mapping continued according to this stratigraphic scheme with Beullac (1983) in the Barraute area, Otis and Béland (1986) in the La Morandière-Rochebeaucourt-Carpentier area, Imreh and Beullac (1987) in the Preissac-La Pause-Cléricy area, and Labbé (1994) in the Amos area.

In 1995, Labbé completed its mapping work in the Amos area, proposing to change the names of the Lower and Upper Figuery formations for the Lower and Upper Figuery groups. The qualifiers “lower” and “upper” have been retained to distinguish two slightly distinct rock types, but part of a single calc-alkaline affinity package (Labbé, 1995). The author also proposes to abandon the term “Harricana Group” because the two historically concerned stratigraphic units (Figuery and Landrienne; Imreh, 1982) have distinct geochemical affinities and are separated by important fault zones (Abcourt and Lyndhurst faults). The Landrienne Formation then became a group (Labbé, 1995), but the latter was brought back to the rank of formation by Pilote et al. (2009). Later, Doucet and Dion (1998a, b) mapped the Languedoc-Authier Nord area, and Doucet (2000) the Taschereau, Sainte-Gertrude-Manneville and Villemontel areas, applying the new stratigraphic nomenclature of Labbé (1995).

In a geological synthesis published by Labbé (1999) covering the Amos area (sheets 32C12 and 32D09), the author modified the previous stratigraphic scheme and proposes to combine the “lower” and “upper” segments of the Figuery Group under the unique name “Figuery Group”. This nomenclature is taken by Pilote et al. (2019) with some local adjustments. The Figuery Group is now divided into 14 informal units. In summary, the Lower Figuery was replaced by units nAfg1 to nAfg3, and the Upper Figuery by units nAfg4 to nAfg14, so as to homogenize the stratigraphy and keep as much as possible previous geological observations. 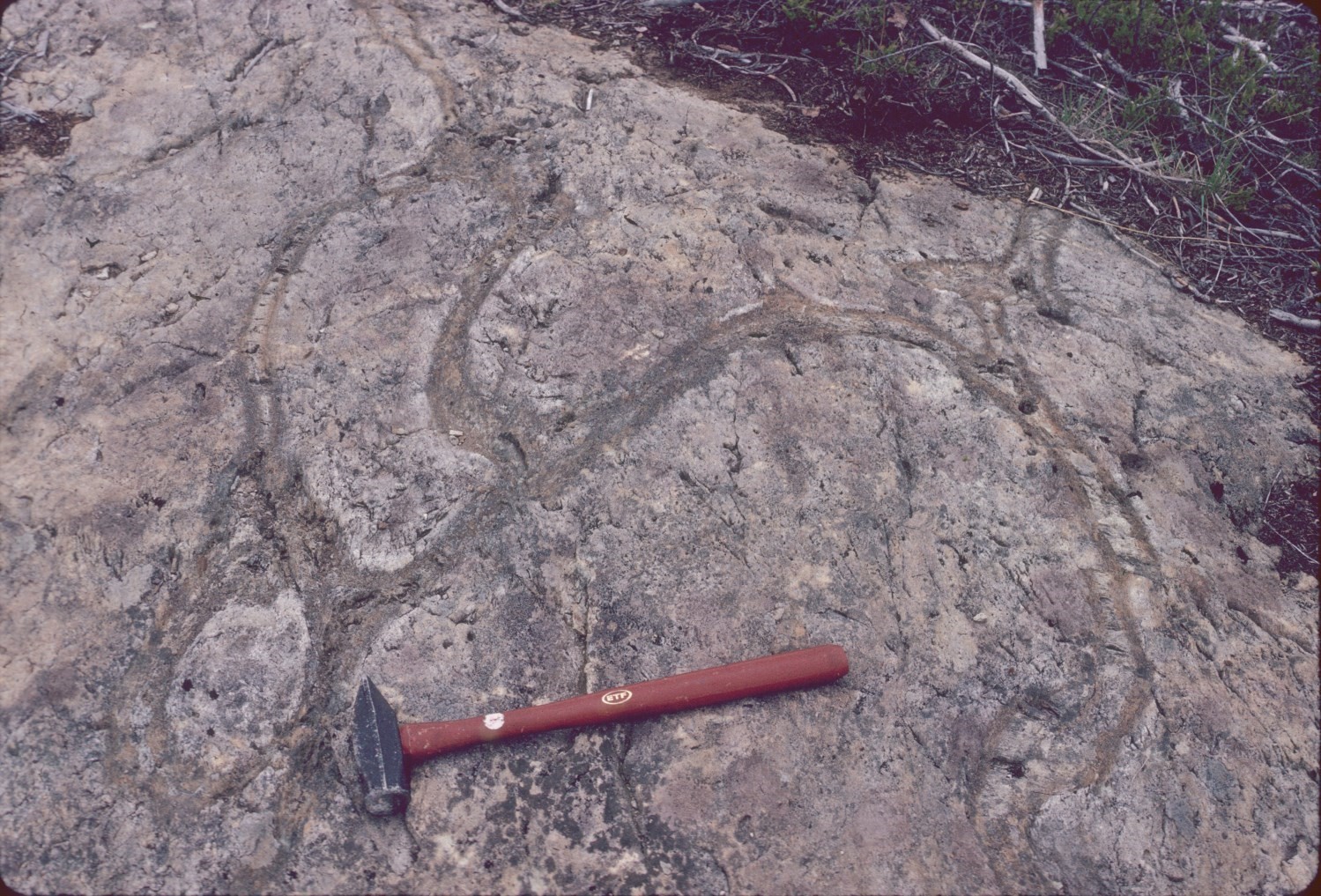 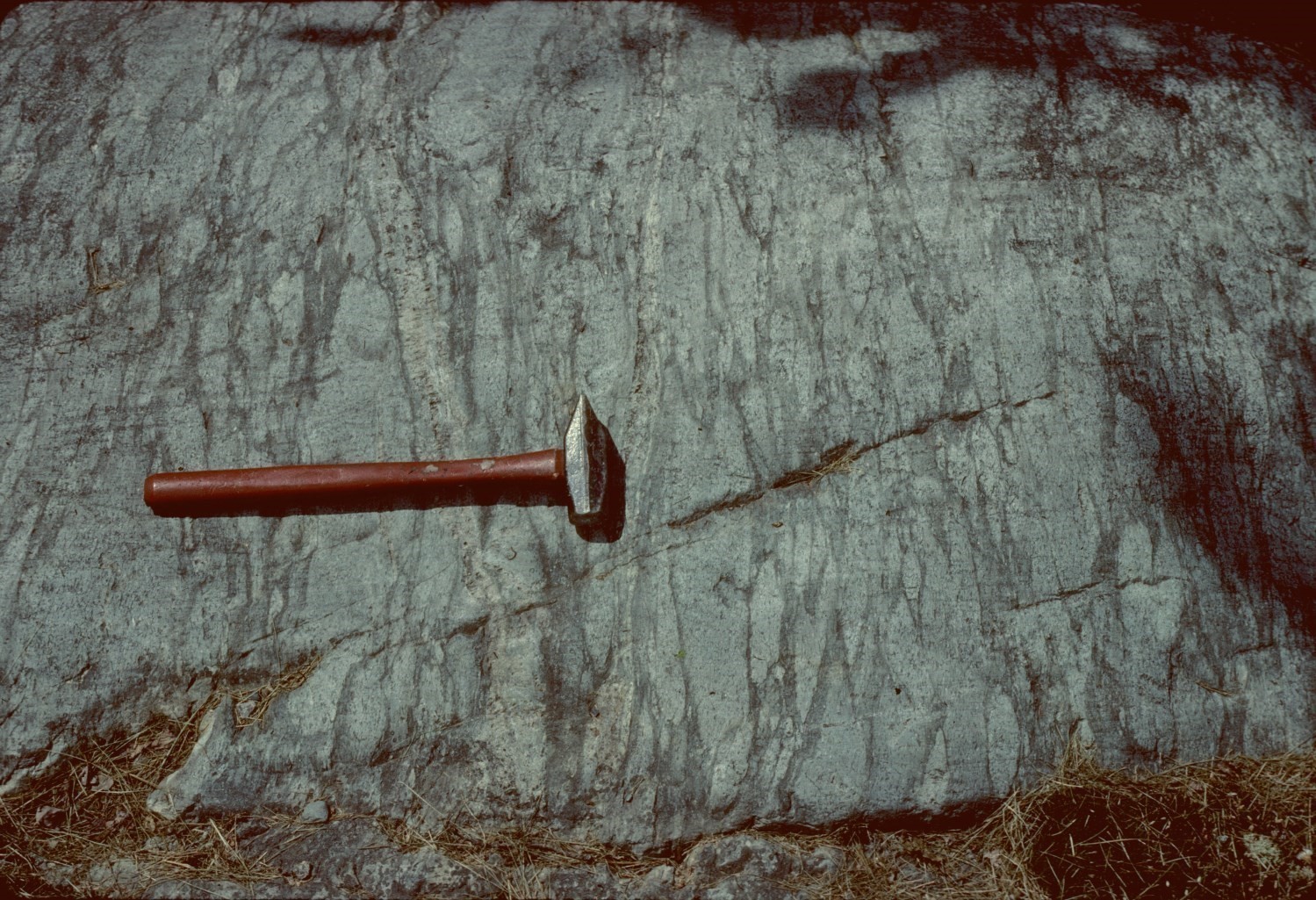 This is the largest unit of the Figuery Group. This unit consists mainly of andesite and calc-alkaline basalt, as well as some horizons of felsic to intermediate volcaniclastics. Rocks are usually pillowed, but some massive flows have been observed and form large horizons a few tens of metres thick. These rocks are green in alteration patina, light green in fresh exposure and aphanitic. Gabbro sills intrude into these volcanics (Labbé, 1995; Doucet and Dion, 1998a, b).

This fragmented unit is interstratified in unit nAfg1, in the western part of the segment occupied by the Figuery Group, more specifically in sheets 32D10 and 32D14.

Unit nAfg3 is located in the NW end of the group. It consists of several horizons of lapilli and block tuff and lapilli tuff of intermediate composition, usually a few metres to a few tens of metres thick. This unit is interstratified with intermediate volcanics. These rocks are usually beige to yellowish in alteration patina and light grey in fresh exposure. Lapilli tuff and lapilli and block tuff are characterized by rounded to subangular, millimetric to decimetric fragments of mafic, intermediate or felsic volcanics in an aphanitic matrix. In general, these fragmented volcaniclastics are poorly sorted and do not show lapilli or block sorting (Doucet, 1998). 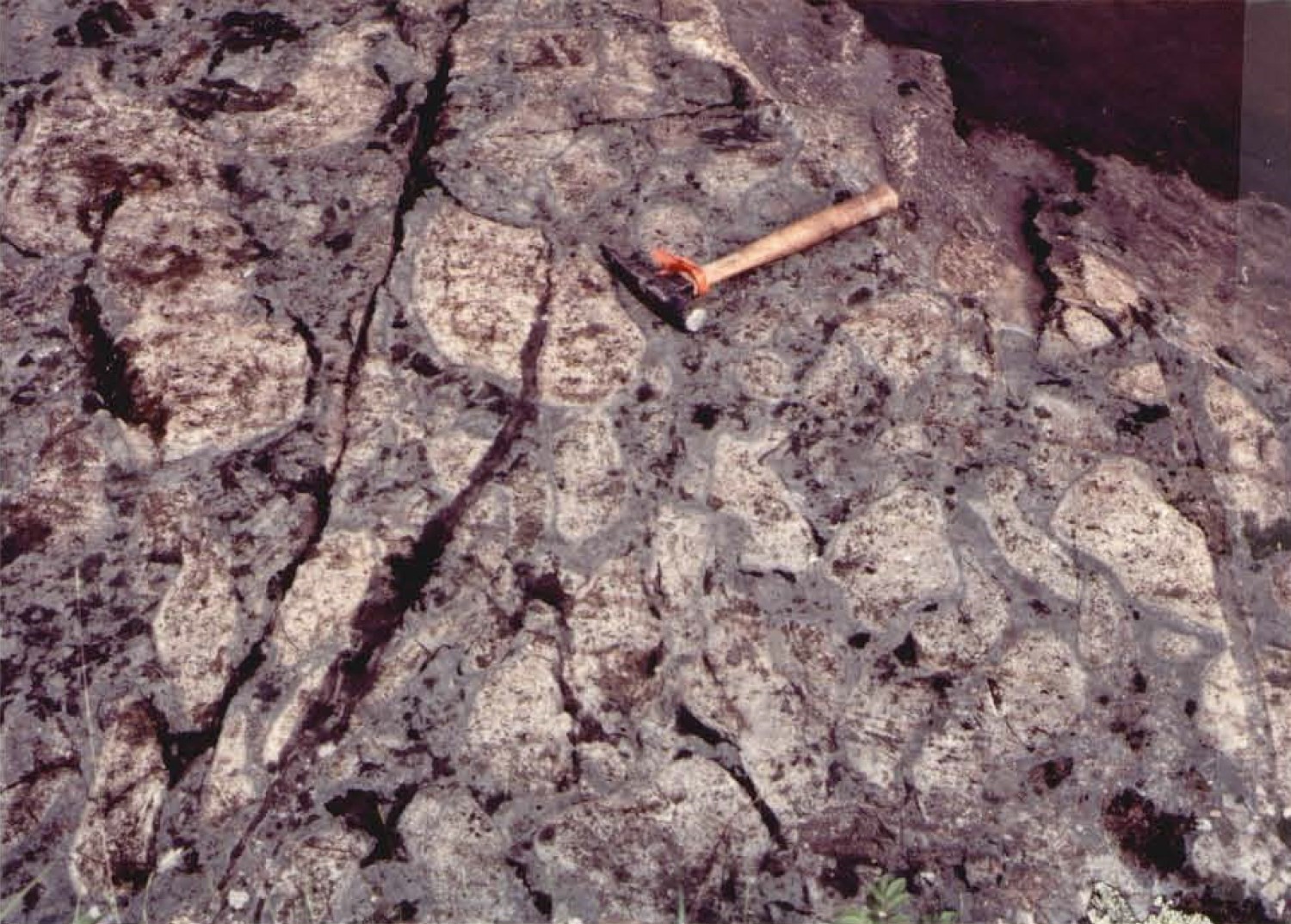 Unit nAfg6 is observed in lenses of limited extent hosted between andesitic flows (nAfg1 and nAfg4; sheet 32D09) or within unit nAfg7 (sheets 32C05 and 32C12). This unit consists of volcaniclastic horizons of intermediate composition. Fragments are commonly of lapilli size and, more locally, of block size (Labbé, 1995).

The largest proportion of Figuery Group felsic volcanics occurs in unit nAfg7. It consists of rhyolite and felsic tuff horizons, greenish white in alteration patina, light grey in fresh exposure, microgranular and even grained. Lapilli tuff horizons a few metres thick were also observed. They are composed of subrounded fragments of felsic volcanics, 0.5-3 cm in diameter, in an aphanitic matrix. This unit is commonly located in the upper part of the Figuery Group (Doucet, 2000; Lavallée and Bourgoin, 2003).

Unit nAfg9 consists of three thin horizons of graphitic sedimentary rock. This unit is located west of Figuery Lake (sheet 32D09). Many other similar beds, but too thin to be mapped, are found at various stratigraphic levels in unit nAfg4.

These horizons of sheared and sericitized pyrophyllite±chloritoid felsic volcanics are located at the contact between sheets 32C06 and 32C11. Rocks are commonly described as quartz-pyrophyllite±chloritoid±muscovite±paragonite schists. Geochemical data indicate that the protolith of these schists may correspond to rhyodacitic to rhyolitic flows and/or tuff horizons of calc-alkaline affinity (Lavallée and Bourgoin, 2003). These lithologies have been significantly altered by hydrothermal fluids and severely affected by regional deformation. They are totally interstratified in unit nAfg7, which is the best estimate of their protolith.

Unit nAfg11 is located at the SE end of the Figuery Group and interstratified in an andesitic unit (nAfg4). It consists of andesitic basalt or basalt and locally mafic tuff. A limited amount of data is currently available to describe this unit, which was observed by Lavallée and Bourgoin (2003).

Unit nAfg12 consists of intermediate felsic tuff located at the base of unit nAfg10. It is affected by significant shearing associated with the Lyndhurst Fault. This fault zone would be located at contact between the Figuery Group and the Deguisier Formation (Moorhead, 1992; Lavallée and Bourgoin, 2003).

Unit nAfg13 is located NE of sheet 32C06. It consists of rhyolite and rhyolitic tuff containing, in several places, quartz and plagioclase crystals and blocks. Blocks are highly flattened and generally of the same nature. A deformation zone severely obliterates primary fabrics in the eastern part of this unit. Pyrophyllite and chloritoid porphyroblasts are observed in varying amounts (Lavallée and Bourgoin, 2003).

Unit nAfg14 was historically recognized by Eakins (1974) in Privat Township in the NW portion of sheet 32D10. It consists of two large enclaves, several hundred metres long, hosted in a vast gabbroic intrusion. These enclaves consist of sedimentary rocks of various compositions from wacke to quartzitic arenite, as well as undifferentiated volcaniclastics.

No U-Pb zircon dating is currently available for Figuery Group volcanics. On the other hand, the tonalitic to granodioritic Taschereau Batholith (Doucet, 2000) intrudes into Figuery volcanics in the northern half of sheet 32D10. This intrusion appears to be devoid of contact metamorphism (Doucet, 2000). Frarey and Krogh (1986) dated this pluton by U-Pb on zircons and obtained an age of 2718.3 +2.3/-2.2 Ma, a result interpreted by Frarey and Krogh (1986) as synvolcanic. This interpretation is also mentioned and supported by the work of Doucet (2000). The age obtained by Frarey and Krogh (1986) implies that the average age of the Figuery Group volcanics should be comparable to that of this intrusion, or slightly older.