The Deguisier Formation consists of Fe-high and Mg-high﻿ massive and pillow tholeiitic basalts (nAdg1), thin chert horizons between flows (nAdg6 and nAdg7), lobed tholeiitic rhyolites and mafic to felsic volcaniclastics. Some of these felsic flows and volcaniclstics associated with unit nAdg3 were dated 2719.4 ±1 Ma and 2718.1 ±1.3 Ma (McNicoll, in Pilote et al., 2009). The abundance of gabbroic sills (nAdg5) is the most distinctive character of this formation, coupled with the absence of ultramafic flows and sills. Gabbro is more abundant in the upper (southern) part of the formation. This formation is also characterized by two marker horizons of glomerophyric basalt (nAdg2) in the Duparquet, Destor and Aiguebelle townships (sheet 32D10, Buffam, 1927; Bannerman, 1940; Graham, 1954; Hocq, 1979; Sanschagrin and Leduc, 1979; Goutier and Lacroix, 1992). These horizons make it possible to trace the Abijévis Synclinal’s hinge in the SE quarter of Aiguebelle Township (Sanschagrin and Leduc, 1979). Volcanic facies and petrography of lava were described in detail in the works of Sanschagrin and Leduc (1979), Leduc (1981) and Sanschagrin (1981).

Tholeiitic glomerophyric basalt is a special variety of massive to locally pillow basalt. It forms excellent marker horizons, extending from 500 m to 3 km with an average thickness rarely exceeding 100 m (Hocq, 1979). It is characterized by the presence of centimetric whitish clusters of feldspar crystals. This unit is particularly well displayed in Aiguebelle National Park (sheets 32D11 and 32D10; see Goutier and Melançon, 2003). 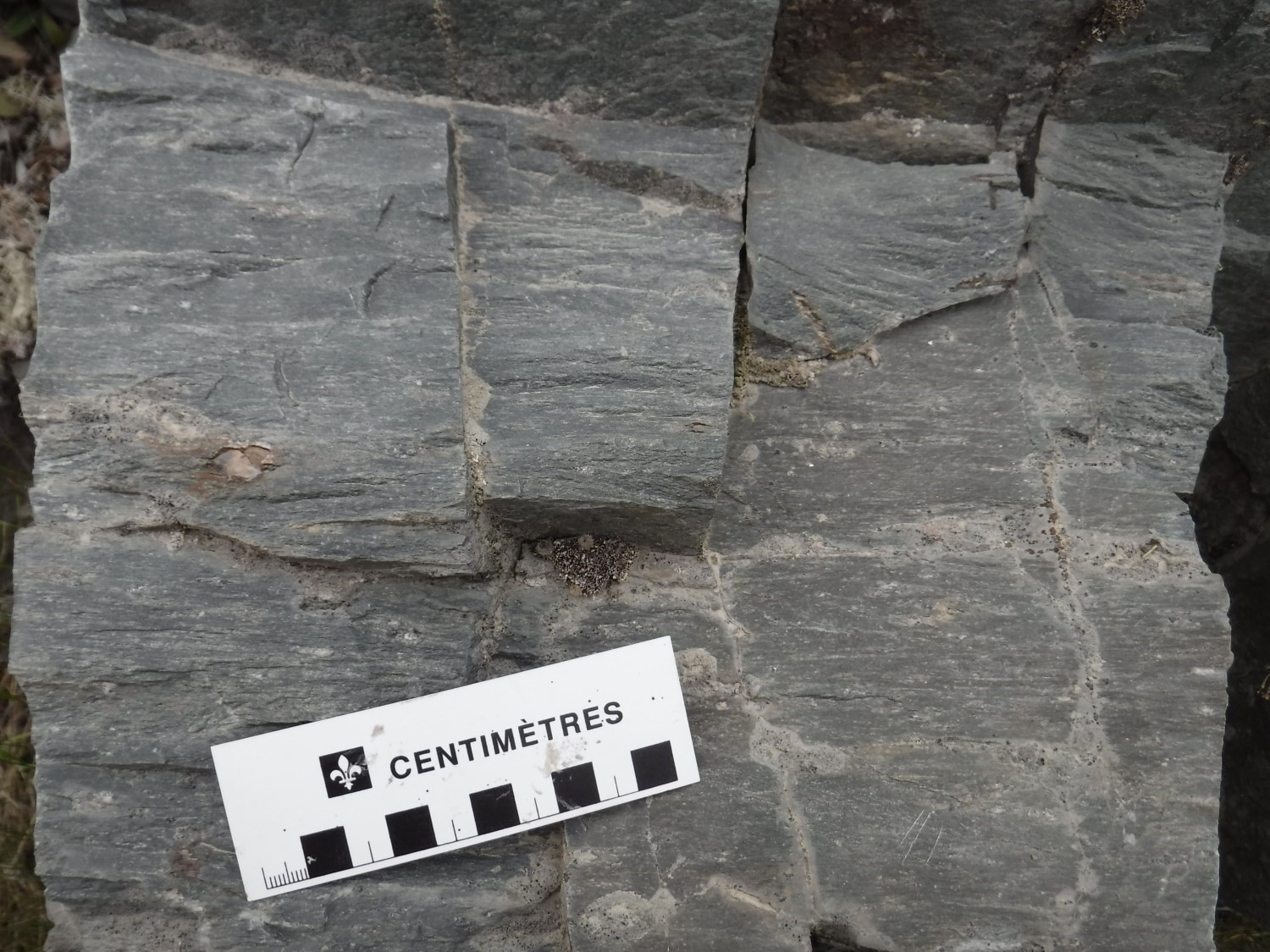 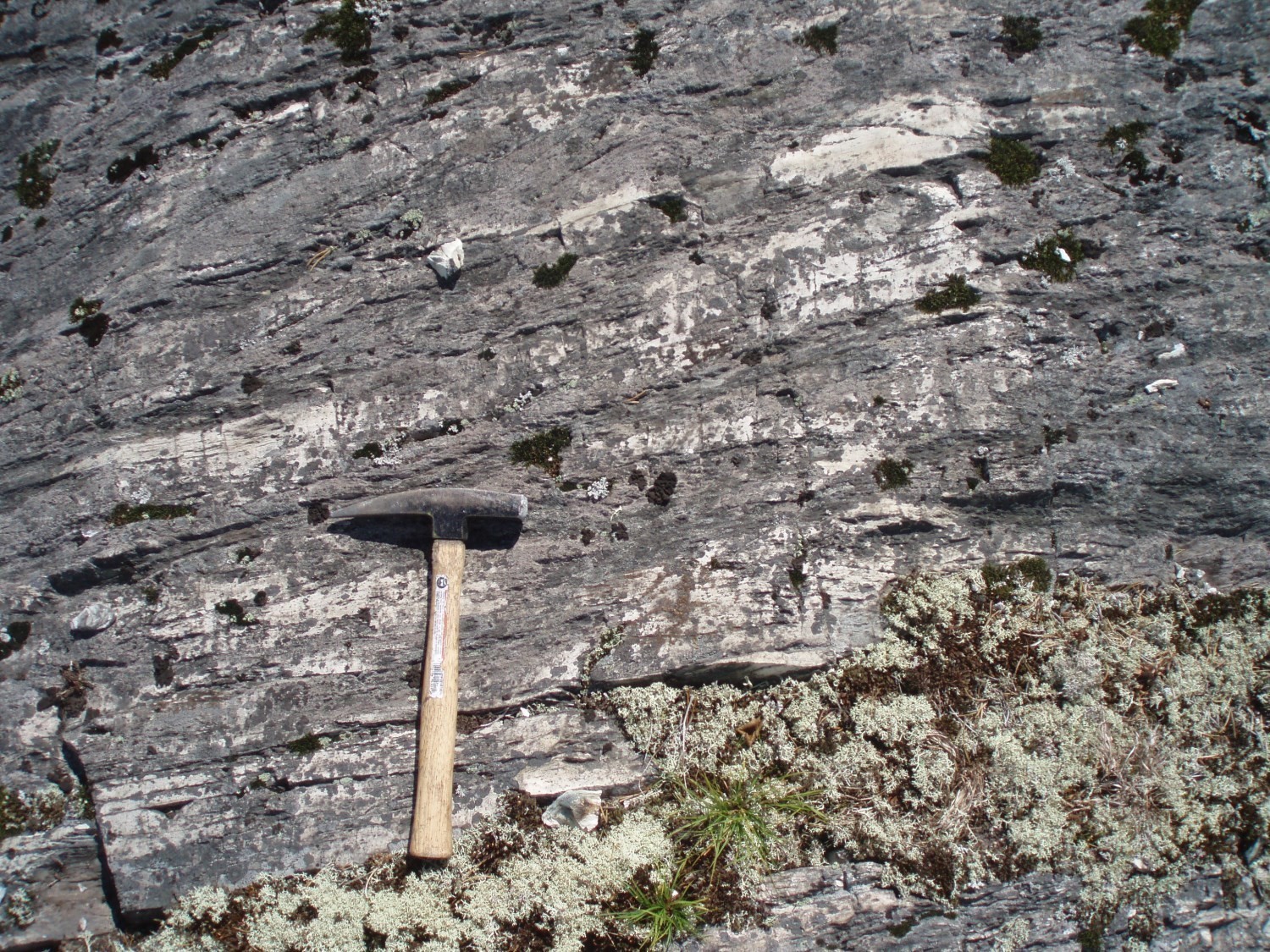 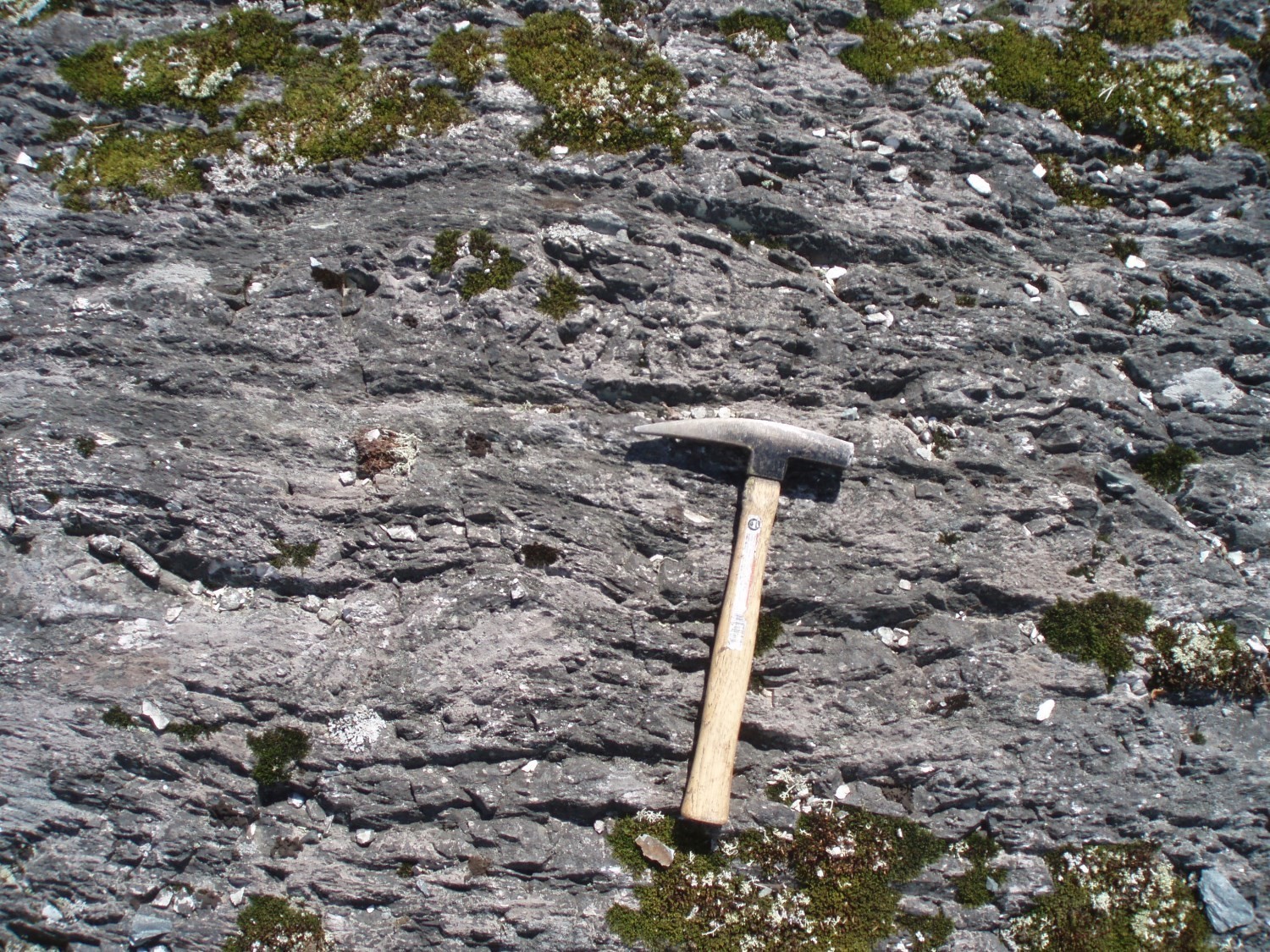 This unit is located mainly in the southern and eastern parts of the Deguisier Formation (Dimroth et al., 1973; Hocq, 1979; Sanschagrin and Leduc, 1979; Leduc, 1981; Sanschagrin, 1981; Goutier, 1997; Pilote et al., 2009). It consists of massive to pillowed andesitic flows of thloeiitic affinity, the average thickness of which generally ranges from 7 to 10 m. The summital part of these flows is commonly brecciated along thicknesses ranging from 1 to 10 m. It should be noted that basaltic flows are uncommon in this unit.

Over 90% of unit nAdg5 is represented by bulky gabbro sills. These sills can reach lengths exceeding 5 km and thicknesses ranging from 800 to 1200 m (Dimroth et al., 1973; Hocq, 1979; Sanschagrin and Leduc, 1979; Leduc, 1981; Sanschagrin, 1981; Goutier, 1997; Pilote et al., 2009). Units nAdg1 and nAdg5 alone represent the majority of the lithologies encountered in the Aiguebelle National Park (sheets 32D11 and 32D10; see Goutier and Melançon, 2003). Gabbros of unit Adg5 likely represent feeder pipes of many basaltic flows (Dimroth et al., 1973; Hocq, 1979; Sanschagrin and Leduc, 1979). They are similar in composition, but are distinguished by coarser grain size. Magnetite basaltic flows and mafic volcaniclastics are marginal parts of the Deguisier Formation. 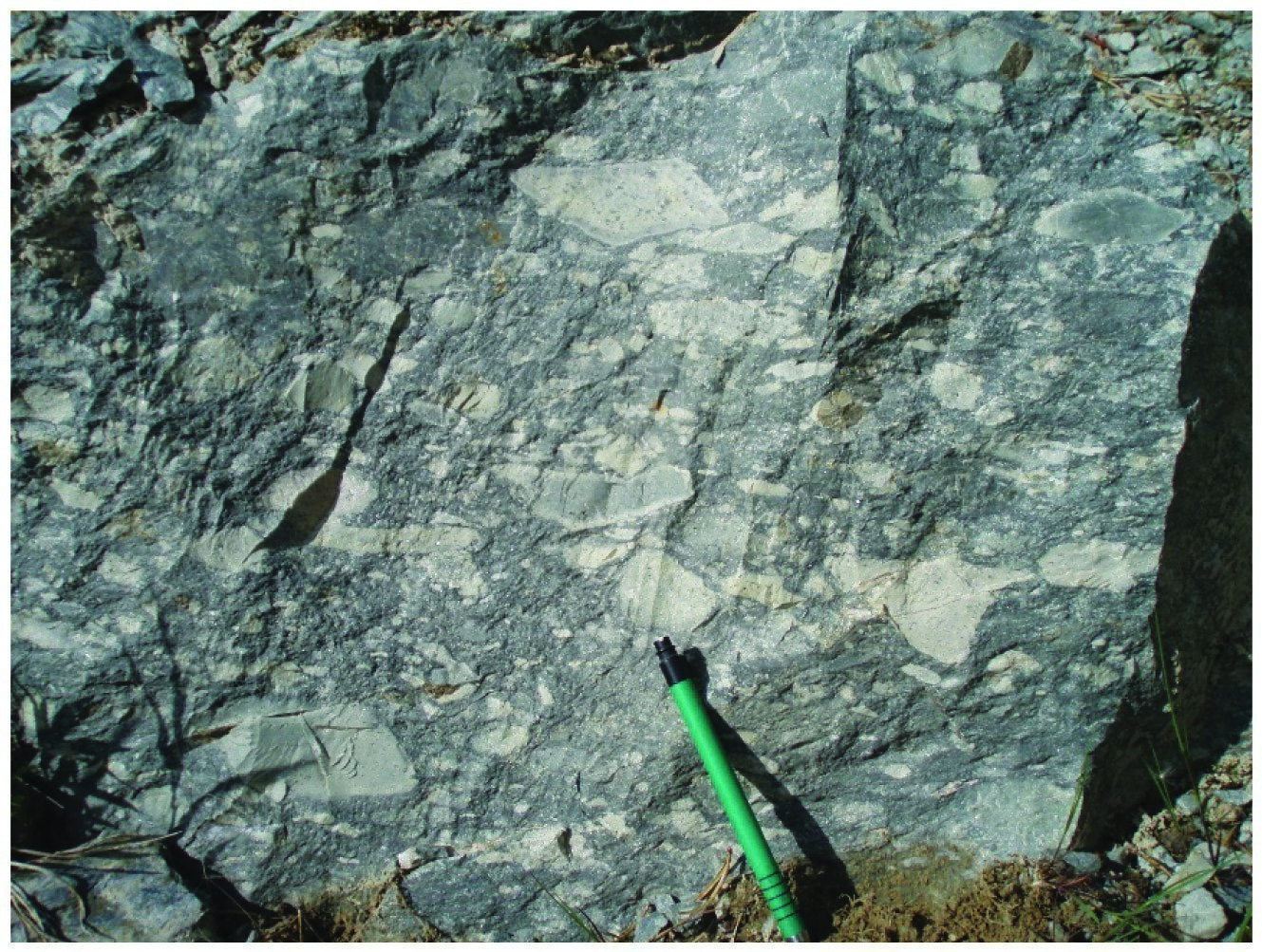 Unit nAdg6 is present only in the central part of the Deguisier Formation in Aiguebelle National Park (sheets 32D11 and 32D10; see Hocq, 1979; Goutier and Melançon, 2003). It consists of thin volcaniclastic horizons that vary in composition from felsic to intermediate. These horizons are discontinuous and moderately long (500-3000 m) with thickness ranging from 100 to 500 m (Hocq, 1979; Sanschagrin and Leduc, 1979). 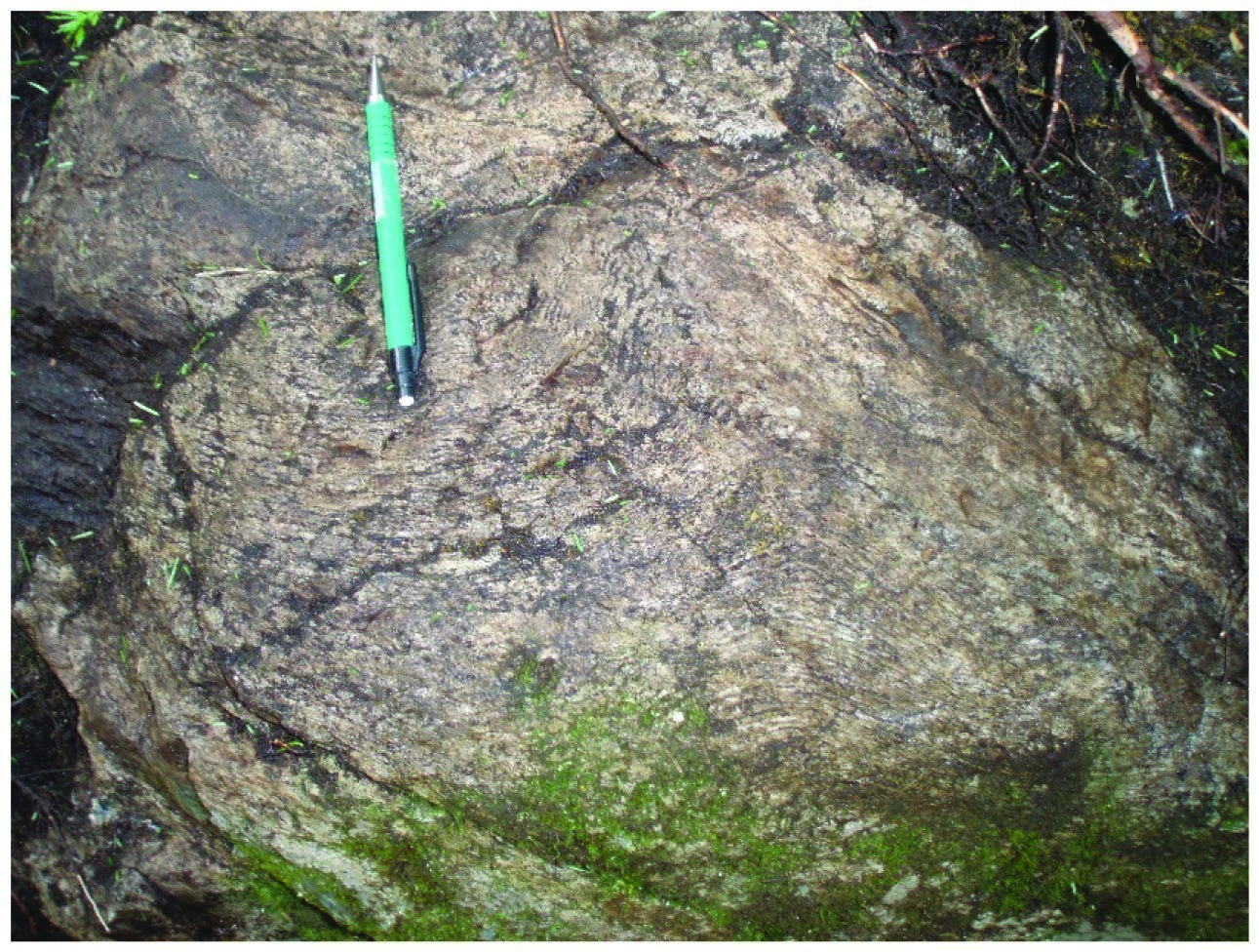 Unit nAdg7 is very small and occurs in the central-eastern part of the Deguisier Formation (sheets 32D07 and 32D10). It forms relatively continuous marker horizons up to 3 km long and approximately 100 to 300 m wide. This unit consists of felsic to locally intermediate volcaniclastics with a fine-grained matrix (Hocq, 1979; Sanschagrin and Leduc, 1979).

Unit nAdg8 is located in the eastern part of the Deguisier Formation (sheet 32D08) and consists of mineralized zone observed at the Newcomex (Figuery Zone) showing. Mineralized horizons were defined by drilling. These are metric horizons rich in semi-massive sulphides (mainly zinc), exhalites and highly silicified volcaniclastics. The lateral extension of these units, according to the numerous drills carried out, does not exceed 500 m.

Unit nAdg9 was encountered in several drills located in the NE corner of sheet 32C05 and NW corner of sheet 32C06. It corresponds to important electromagnetic conductors (“INPUT” type anomalies) noted on geophysical surveys (GSC et al., 2009). This unit consists of graphitic mudstone, siltstone and cherty tuff for a total thickness of 2 to 30 m and a lateral extension of up to several kilometres. Sulphides (pyrrhotite and pyrite) are very common and vary in content (trace-5%). This unit is deformed and generally run by large longitudinal faults, giving it both a stratigraphic and structural marker (allowing position of some large faults to be clarified).

This formation marks the base of the Kinojévis Group. The Deguisier and Lanaudière formations are in fault contact (Aiguebelle Fault) throughout sheets 32C05 to 32D11 over more than 70 km. To the east of the intersection of the Abijévis Synclinal axial plane with the Aiguebelle Fault, volcanics of these two formations show opposite polarities.