Units of the Lanaudière Formation are located in NTS sheets 32D11, 32D10, 32D07 and 32D06, as well as 32C03, 32C04 and 32C05. Sequences with the best outcrop density are located in the Aiguebelle and Destor townships (sheet 32D07). They are described by Larouche (1974), Hocq (1979), Sanschagrin and Leduc (1979) and Dimroth et al. (1982) as the Destor Volcanic Complex. At the same time, Boivin (1974) interpreted the west extension of these units (sheet 32D06, west of Road 101, Destor and Duparquet townships) and assigned them to the Lac Lanaudière Formation. Goutier and Lacroix (1992) use the name Lanaudière Complex to refer to this unit because of the abundance of intrusions into its western part and the high intensity of regional deformation. In the Destor and Duparquet townships, the base of the formation was arbitrarily set by Goutier and Lacroix (1992) coinciding with the first rhyolitic volcanics.

The Lanaudière Formation consists of mafic and felsic volcanics and ultramafic lava (Sanschagrin and Leduc, 1979; Goutier 1997), as well as numerous tonalitic to monzonitic intrusions. Volcanic units are E-W oriented and have moderate to shallow dip to the north. Their polarity systematically faces south. Two of the rhyolitic complexes (nAln1) of this formation, which define tholeitic suites, delivered zircon U-Pb ages of 2718.7 ±0.7 Ma and 2716.2 ±0.8 Ma (McNicoll, in Pilote et al., 2009). These ages, as well as the close spatial association observed between ultramafic lava and rhyolitic complexes of this formation, have significant similarities with the Kidd-Munro assemblage (Bleeker et al., 1999; Berger, 2002; Ayer et al., 2002). The Lanaudière Formation is bounded to the north by the Aiguebelle Fault and to the south by the Manneville Nord Fault, which has shallow to moderate dip to the north (Mueller et al., 1996; Daigneault et al., 2002; Pilote et al., 2009). Goutier (1997) proposed that the Deguisier and Lanaudière formations were initially contiguous and subsequently separated by faults.

Basalt is predominant in the Lanaudière Formation. They are interbedded with felsic and ultramafic rocks. This formation also contains felsic pyroclastics and rhyolitic flows. Rhyolites form strips 10 to 150 m thick. Rhyolite facies are wide ranging: aphanitic, quartz porphyritic, feldspar porphyritic or quartz-feldspar porphyritic, or even spherulitic. The most commonly encountered facies are lobes and breccias having fluid flow structures indicative of submarine flows fed by small felsic centres.

Breccia, cumulate and spinifex facies﻿ ultramafic lava flows, magnesian basalts and komatiites outcrop throughout this formation. These mainly ultramafic units are in normal contact with other lithologies; they are commonly located in the upper half of the formation. Peridotite intrusions and pyroxenite are adjacent to and likely genetically associated with ultramafic lava.

Regional metamorphism is mainly to the greenschist facies. However, in the Barraute-La Corne area (NW quarter of sheet 32C05), it reaches the amphibolite facies in the south half of this sheet (outcrops 17-PP-80 and 17-PP-81). The typical mineralogical assemblage of massive and pillow mafic volcanics is thus albite-actinolite or pale green hornblende-chlorite-epidote-quartz-carbonate. Ultramafic units are tremolitized and serpentinized, i.e. converted to talc and chlorite schists. The mineralogical assemblage of serpentinized ultramafics consists, more precisely, of serpentine-magnetite-chlorite ± talc ± carbonate ± quartz (Jones, 1964; Brett et al., 1976; Imreh, 1984, 1991; Daigneault et al., 2002, 2004).

The following units were mapped in areas west of Barraute by Pilote et al. (2018, 2019): nAln1, nAln2, nAln3, nAln5, nAln13 and nAln14. The remaining units have been compiled from SIGEOM mapping (MNRF, 2010) or other older documents and will be subject to revision in future mapping work. 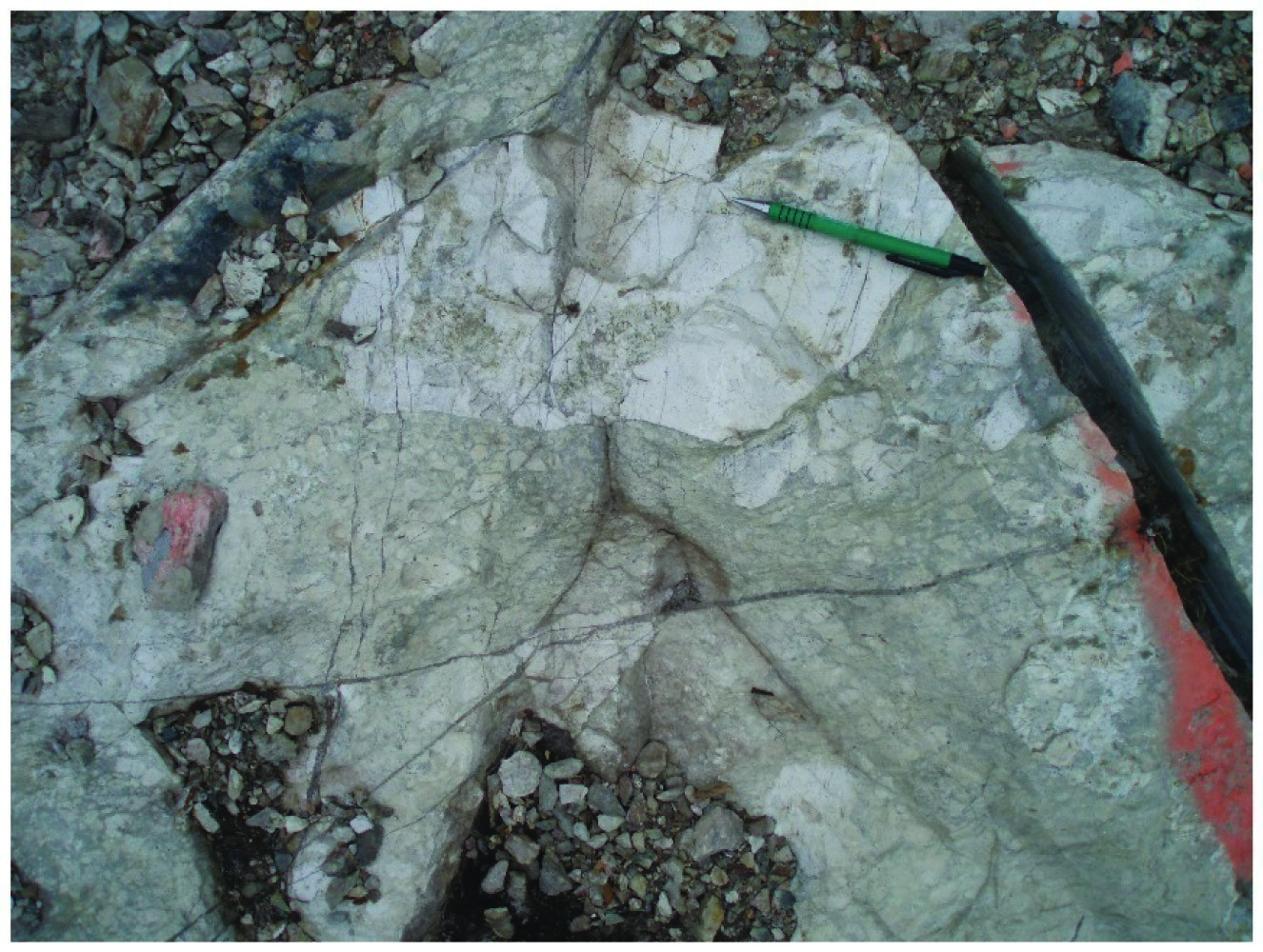 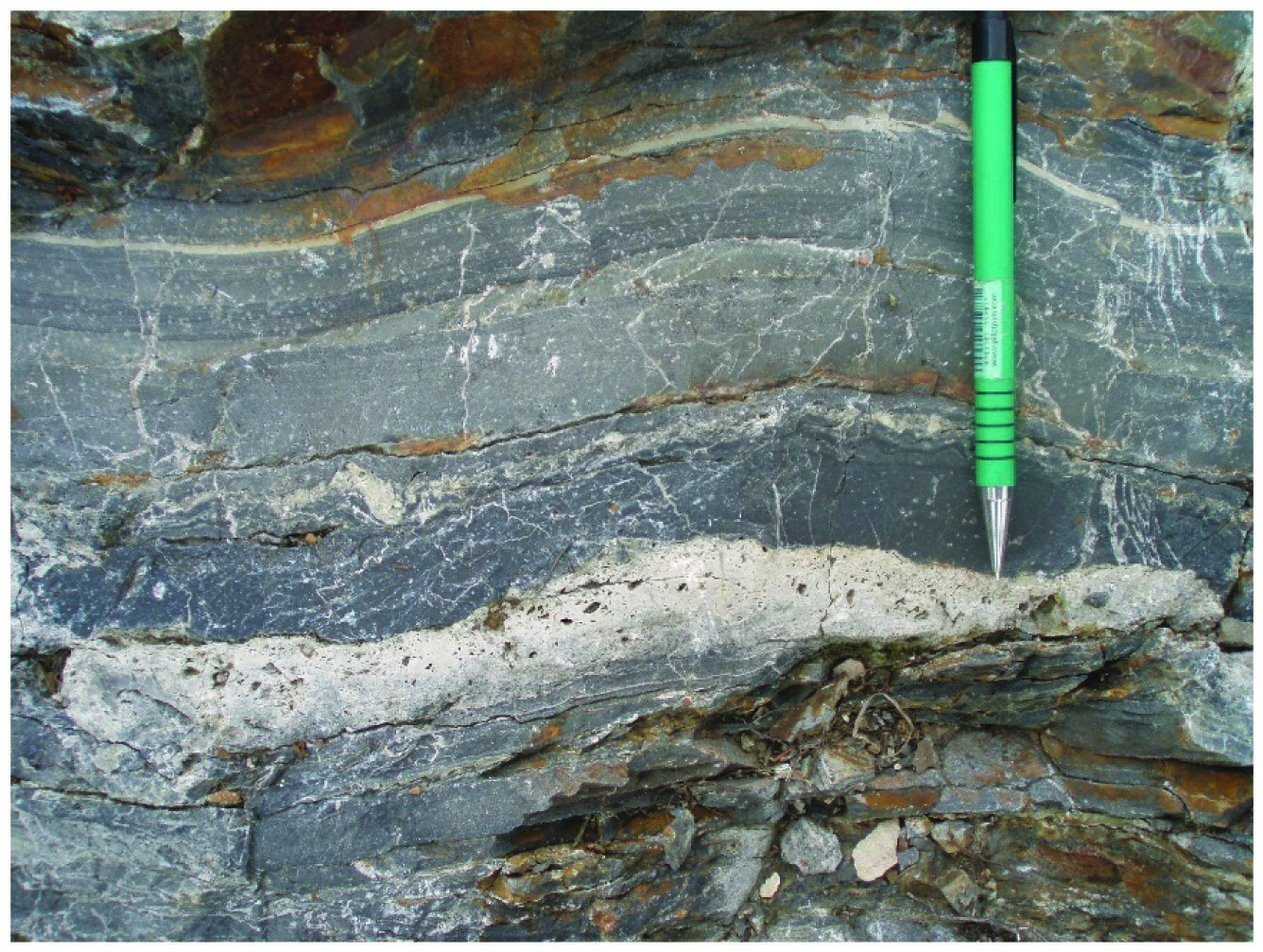 Lithologies of unit nAlan1 were only observed at the west end of sheet 32C05 NW quarter. The presence of this unit was determined primarily from drilling observations in sheets 32D08 (Love, 1963a) and 32C05 (Love, 1963b), and some compilation outcrops (Sharpe, 1961). It consists of massive rhyolitic and dacitic flows, accompanied by poorly sorted coarse-grained volcaniclastic sequences. The intensity of deformation is generally high and a well-developed regional schistosity is observed. 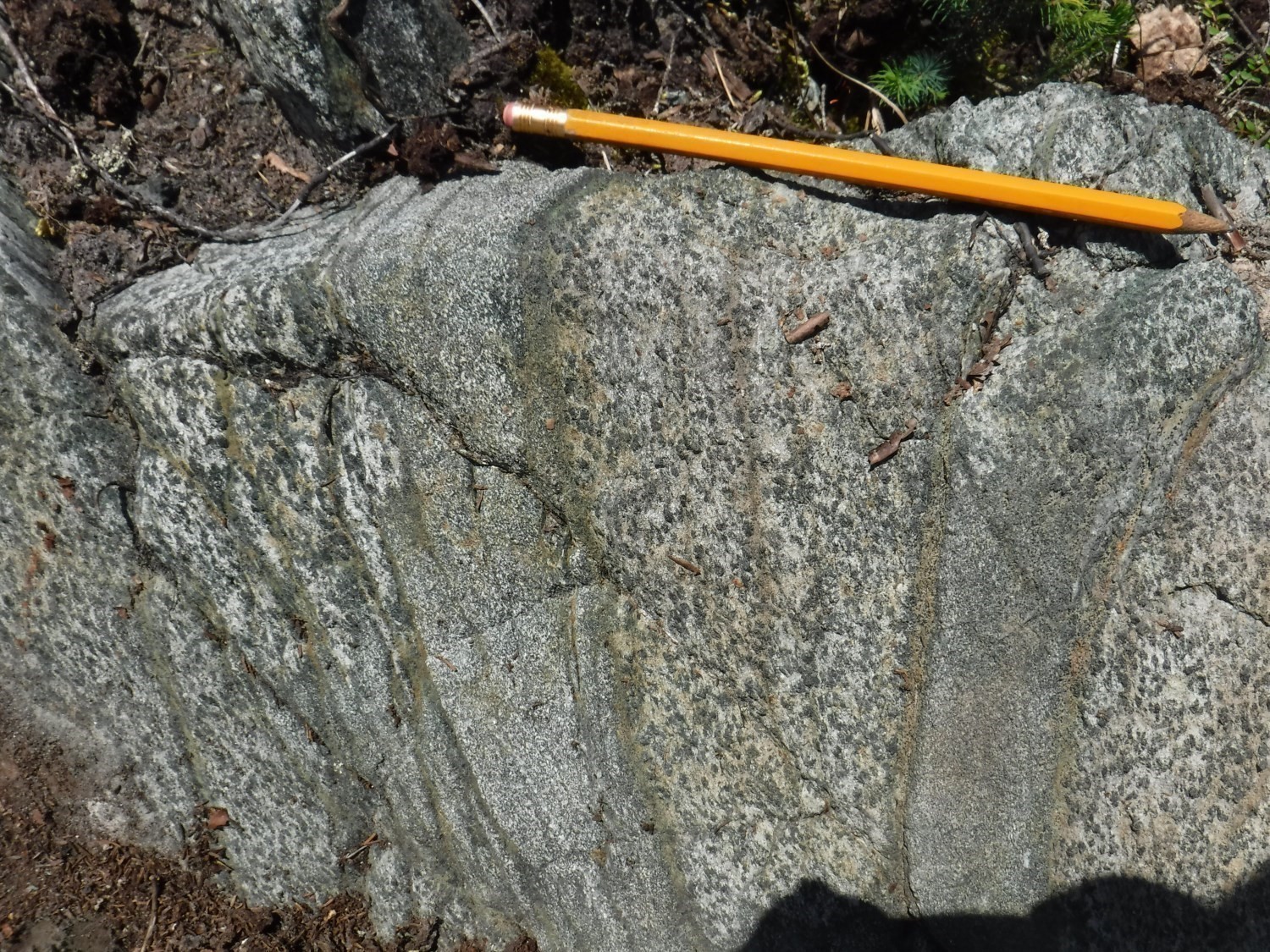 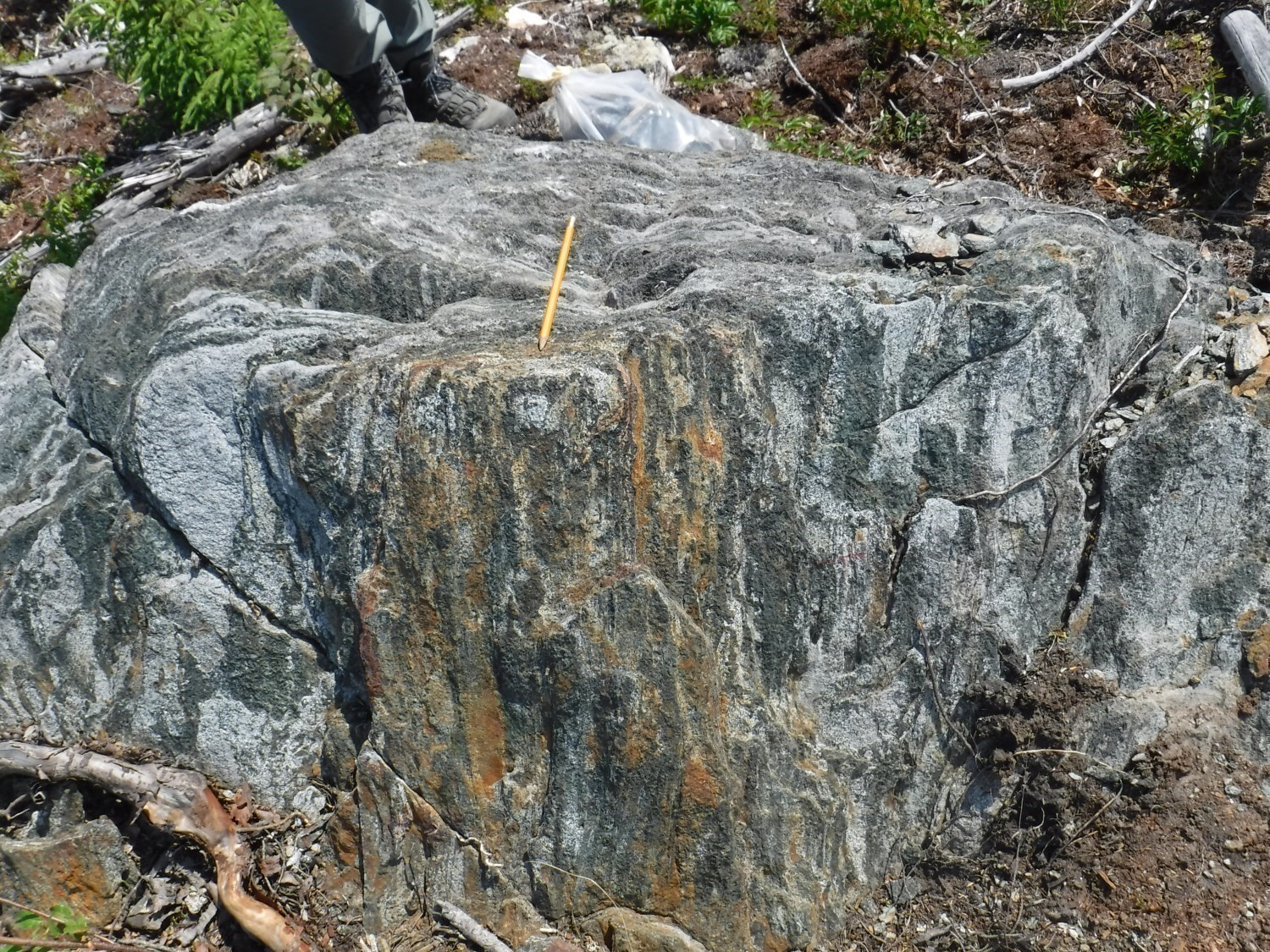 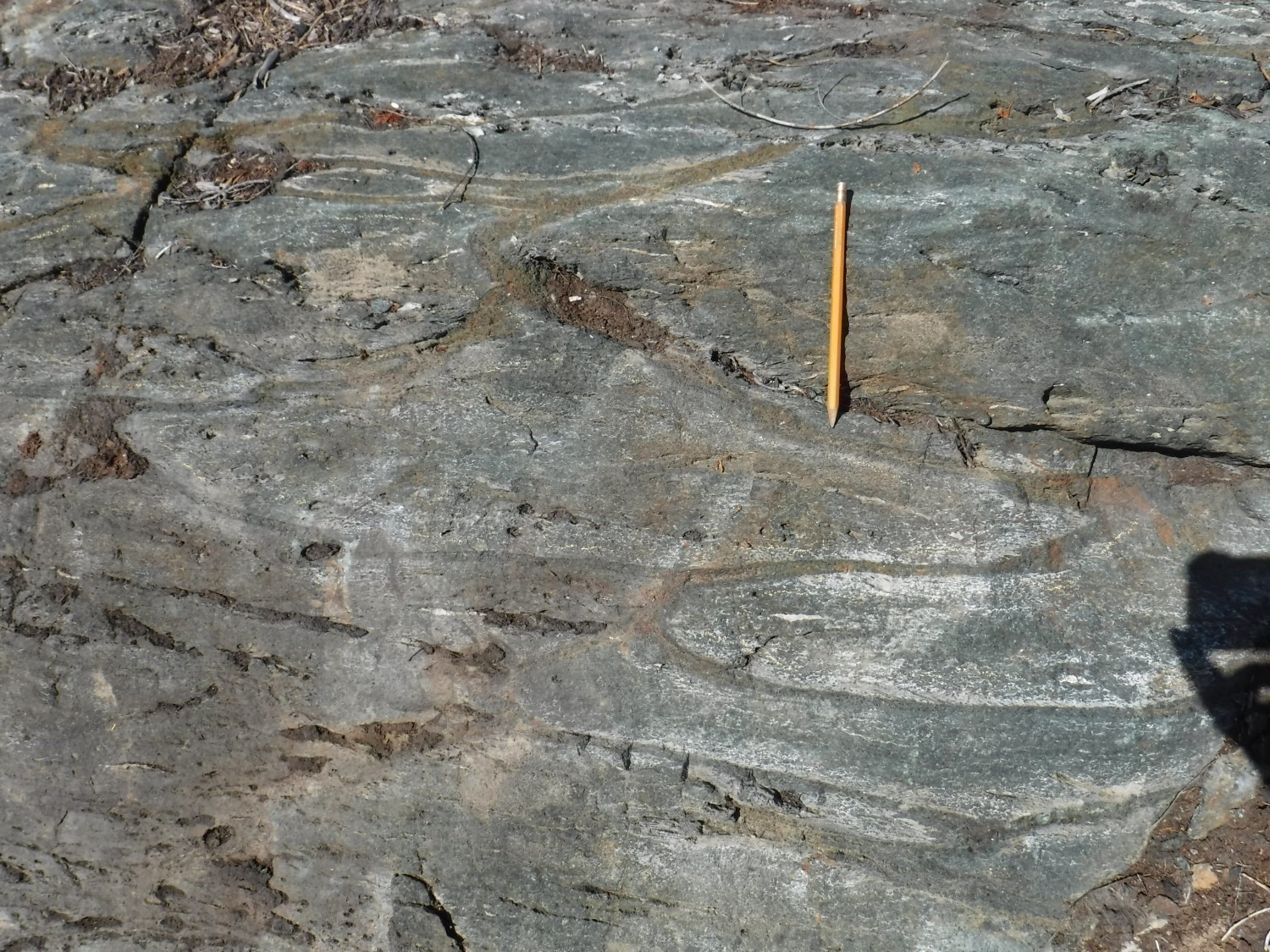 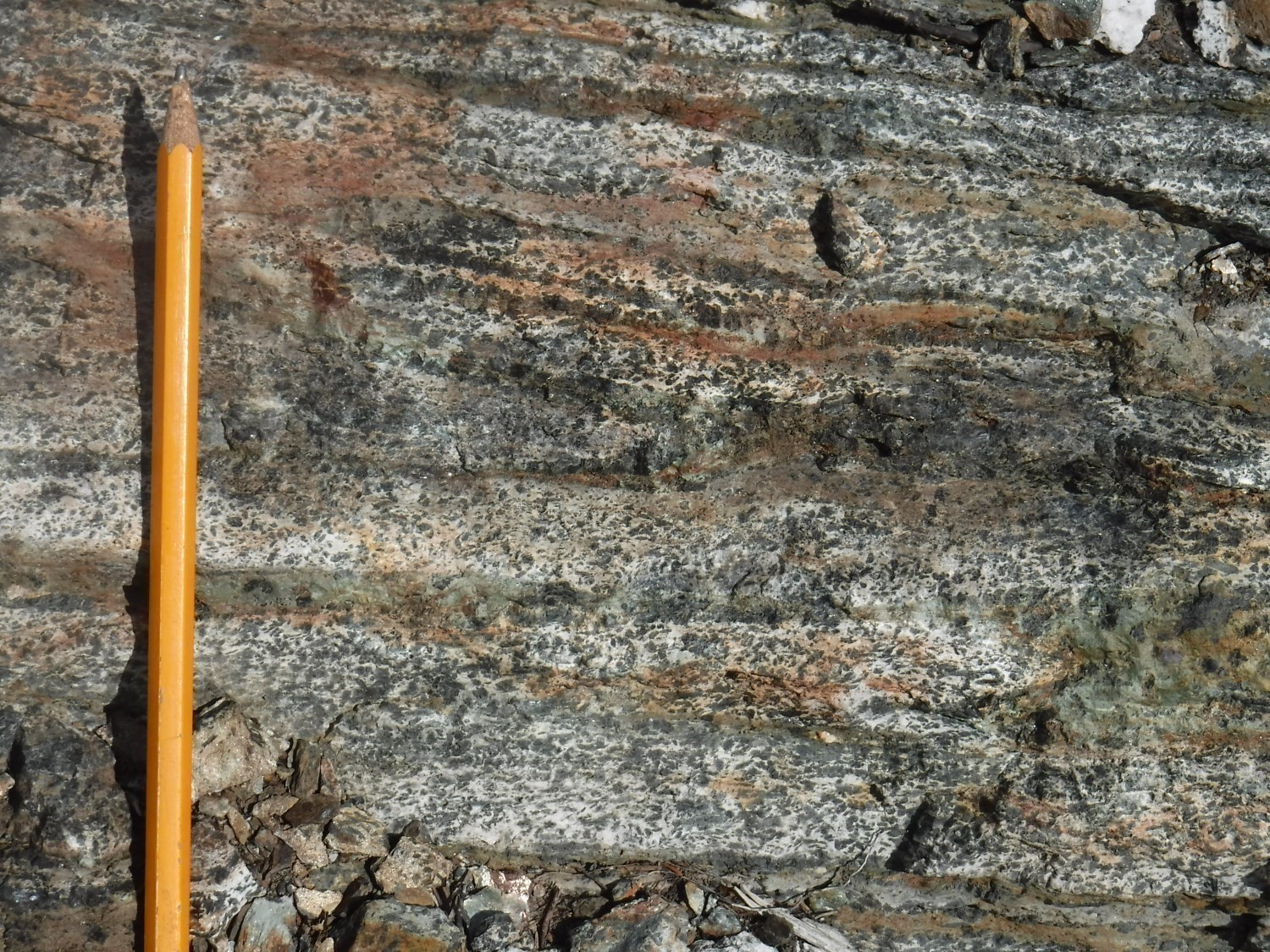 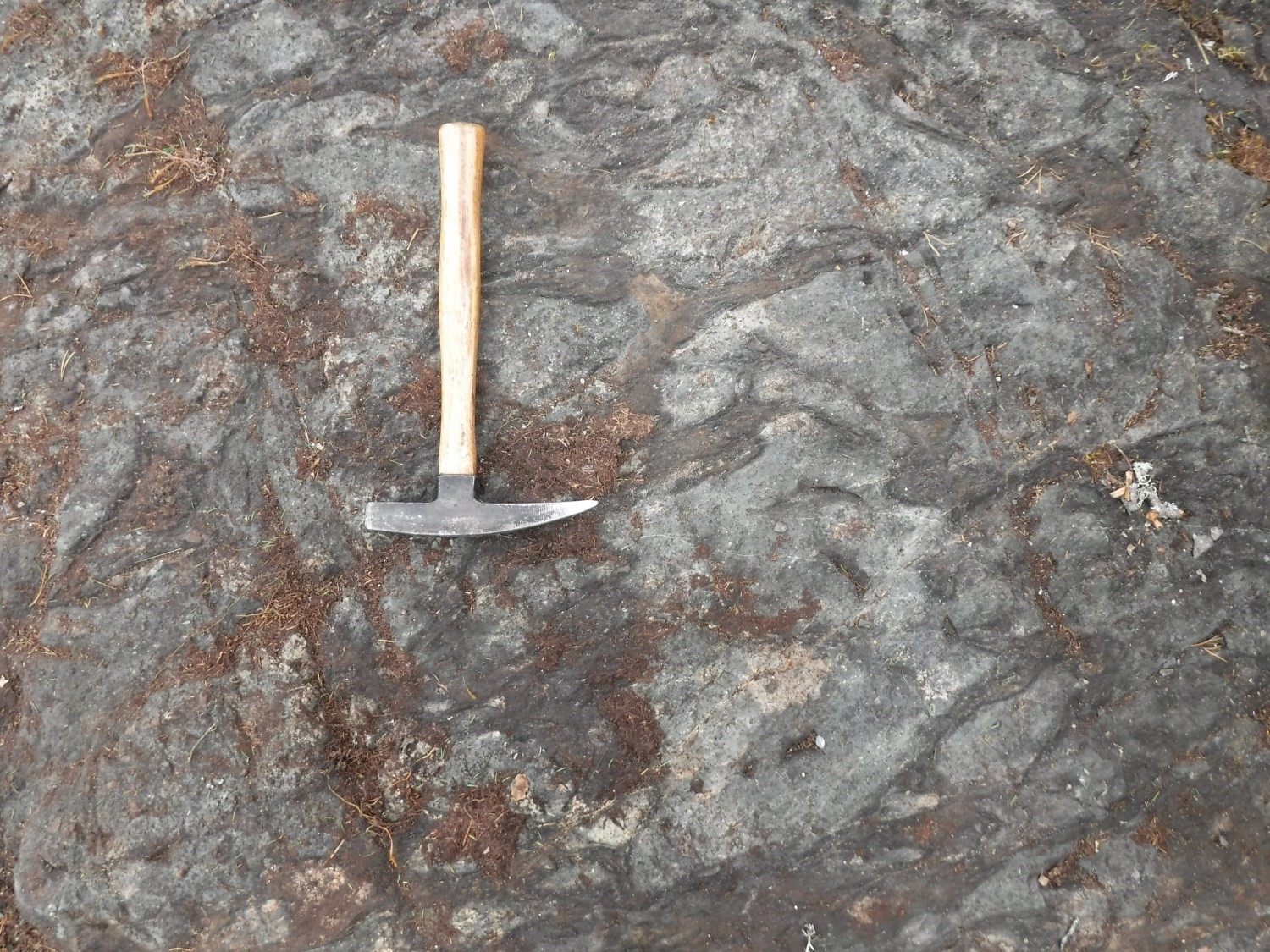 This unit consists of basaltic flows with massive, pillowed and brecciated morphofacies. Flow thickness varies on average from 10 ﻿m to rarely more than 20 ﻿m. Schistosity is generally well developed. Lithologies are metamorphosed to the amphibolite facies in sheet 32C05, immediately north of the La Corne Batholith. They are E-W oriented with dips of 30˚ to 45° northward. These sequences are overturned, with polarities to the south. 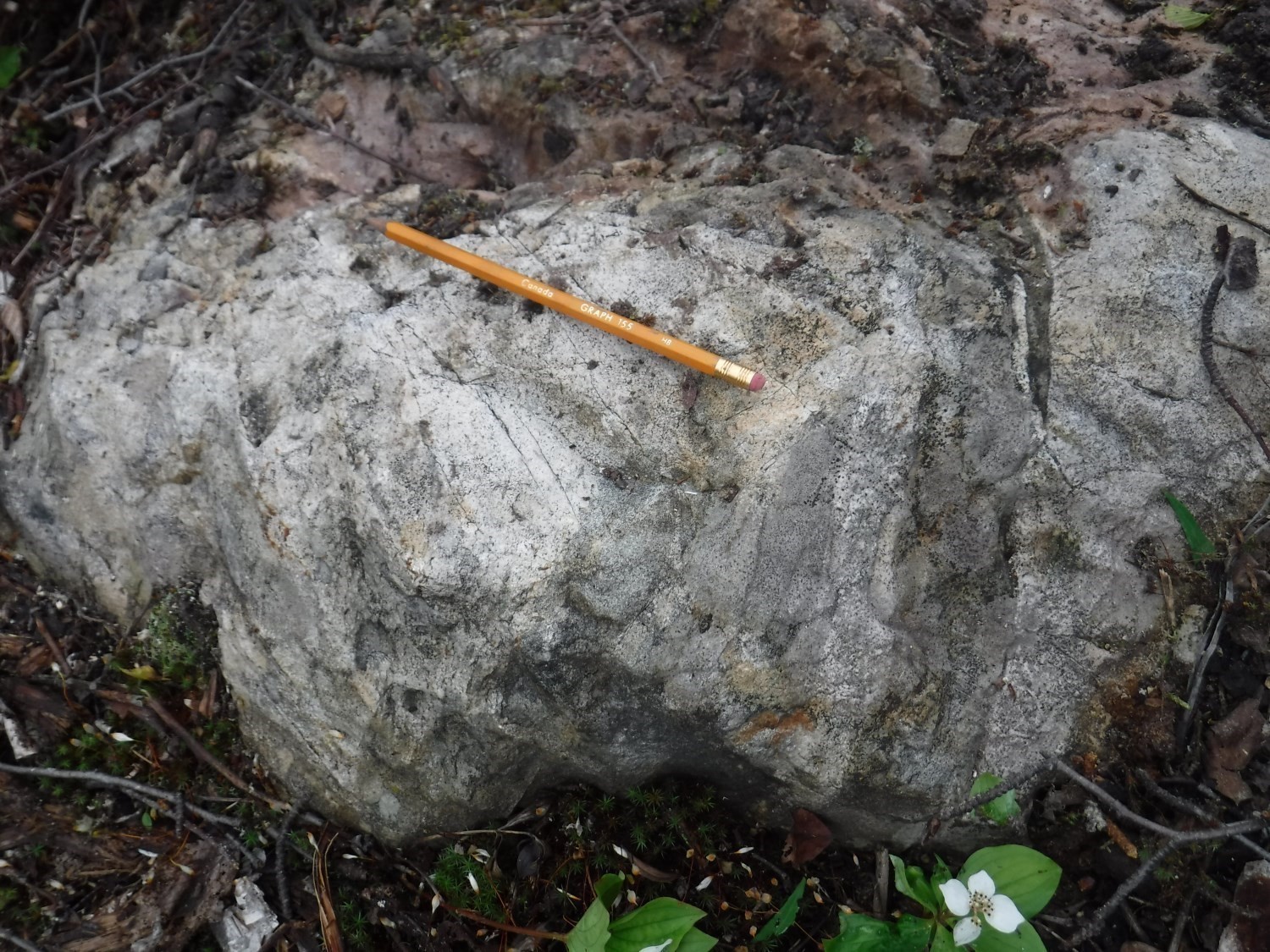 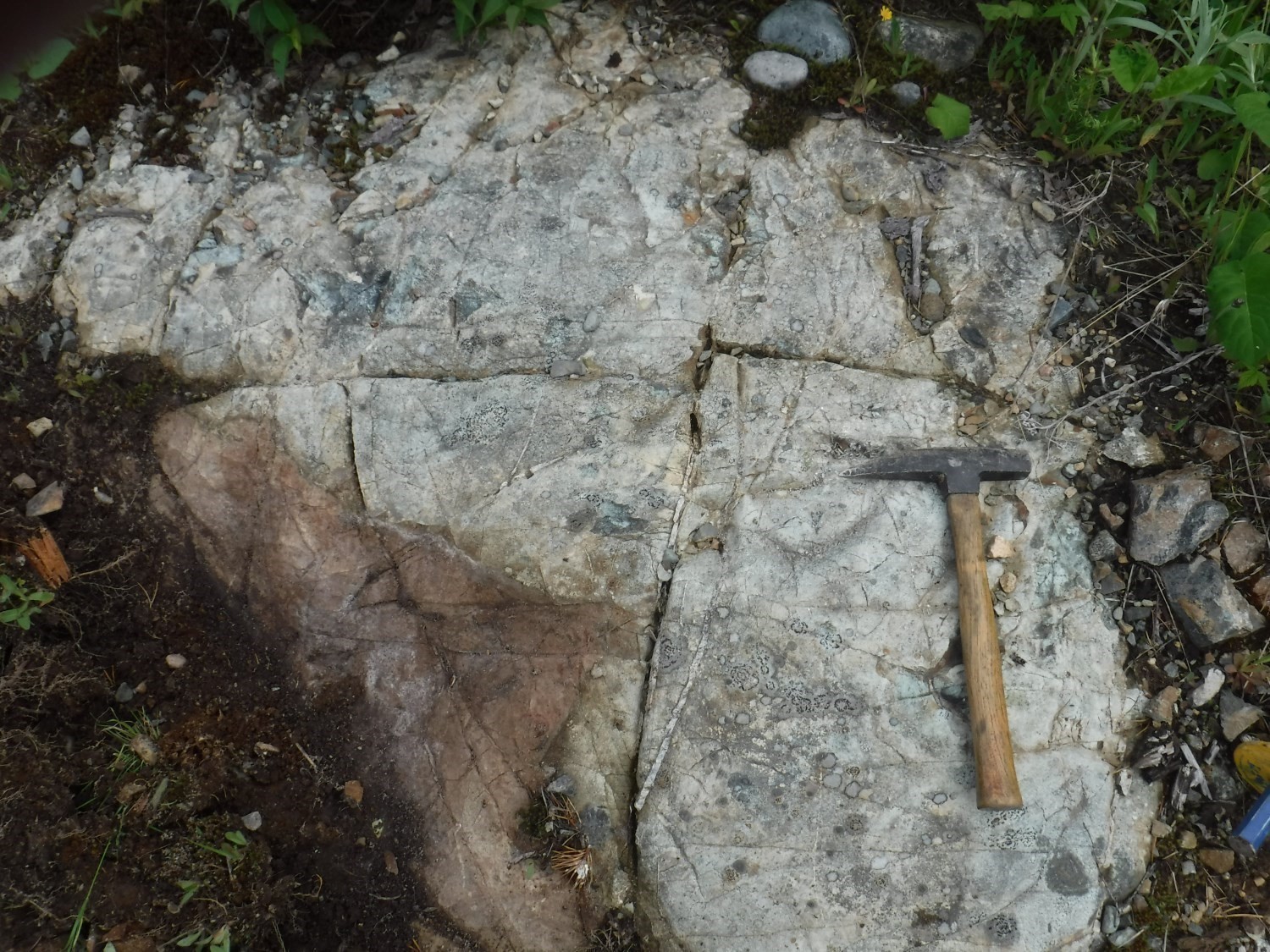 This unit contains komatic flows, ultramafic sills and some horizons of basalt and mafic volcaniclastics. The deformation level varies from moderate to severe. Ultramafic lithologies are usually replaced by a talc-chlorite-serpentine assemblage. True komatiitic flows with spinifex are uncommon. Dunitic or peridotitic sills dominate in the central and eastern portions of sheet 32C05 NW quarter. Lithologies are E-W oriented with dips of 30˚ to 45° northward. Sequences are overturned with polarities facing south.

The andesite unit is located on the edge of sheets 32D06 and 32D11, in the eastern portion of these sheets. It has a vesicular, pillowed and massive appearance. Unlike Lanaudière basalt, andesite is distinguished by a significant amount of plagioclase and absence of actinolite. On the other hand, it is affected by carbonation of the same intensity as basalt bordering it to the north (Goutier and Lacroix, 1992).

This unit is similar to unit nAla2, except that magnesian basalts replace komatiitic flows. The deformation level varies from moderate to severe. Lithologies are E-W oriented with dips of 30˚ to 45° northward. Sequences are overturned with polarities to the south.

Unit nAln6 consists of a basaltic flow with thin magnetite beds and medium-grained ferromagnesian gabbroic sills (Beauregard and Gaudreault, 2014). It is located in the southern portion of the Lanaudière Formation, between Pascalis and Laverdière lakes.

Unit nAln7 consists mainly of block and lapilli tuffs of intermediate to felsic composition located south of Tiblemont Lake (sheet 32C03; Pilote et al., 2016a). These lithologies are likely the result of erosion or destruction of volcanic edifices that compose unit nAln9, which is spatially associated with it.

Unit nAln8, consisting of ferrugineous sedimentary rocks and thin iron formation horizons, is interbedded into mafic volcanics (Pilote et al., 2016b). It is located in the SE portion of sheet 32C05 and has deformation similar to that of units nAln1 and nAln3.

These lithologies are located south of Tiblemont Lake. They are composed mainly of pyroclastic rocks and felsic to intermediate flows (Bubar et al., 1988; Pilote et al., 2016a). Hosted in rhyolitic flows about 60 metres thick, the pyroclastic rock is massive and consists of ash and lapilli green tuffs. The felsic part contains quartz phenocrystals, while the intermediate part contains up to 5% lepidoblastic biotite porphyroblasts (Ali and Plante, 2012).

Unit nAln11 is thin and easily recognizable on aeromagnetic surveys (GSC et al., 2008) because of its high magnetic susceptibility. It is interbedded in unit nAln2, more precisely in the centre of sheet 32C03.

This subunit was identified in drillings. It appears to be interbedded with unit nAln1 dacite and chert beds. Tuff is grey to light green and contains disseminated pyrite and pyrrhotite (Goyette and Ingham, 1953). This subunit also forms the body of the Absam, Barvallée, Belfort (Roymont) and Vendôme No 1 (Mogador) mineralized zones. For these four zones, sulphides consist of sphalerite, pyrite and chalcopyrite.

Subunit nAln12b is the central and richest part of the Absam, Barvallée, Belfort (Roymont) and Vendôme No 1 (Mogador) mineralized zones. Mineralization consists of massive sulphide clusters and veins consisting of silver-bearing sphalerite, pyrite and chalcopyrite. The minimum thickness of clusters and veins is 2 m, but can be as much as 10 m.

Lithologies (sandstone, turbiditic mudrock, claystone) of this unit are generally spatially associated with ultramafic flows or sills. They are observed mainly in drilling, rarely in outcrop. Beds, homogeneous and well-stratified, are 20 to 40 cm thick.

Unit nAln14 consists of intermediate to felsic volcanics and volcanoclastics associated with high magnetic susceptibility values. These lithologies are 4 to 30 m thick and can be tracked on aeromagnetic surveys for several hundred metres (GSC et al., 2009).

The Lanaudière Formation is a package of overall E-W-oriented volcanic and intrusive lithologies with stratigraphic thicknesses ranging from 1 ﻿km to nearly 5 km and affected by the Abijévis Synclinal (Dimroth et al., 1973; Hocq, 1979; Sanschagrin and Leduc, 1979; Leduc, 1981; Sanschagrin, 1981; Goutier, 1997). Various volcanic units belonging to this formation are found from west to east in sheets 32D06, 32D07, 32D08, 32C05 and 32C04, north of the Porcupine-Destor–Manneville Nord Fault Zone and Caste Formation sedimentary units.

The Lanaudière Formation is bounded by the Aiguebelle and Manneville Nord faults, which shallow dip to the north (Mueller et al., 1996; Daigneault et al., 2002). These faults are possible subsidiary to the Destor-Porcupine system identified further west (Goutier, 1997; Legault et al., 2005).

Three of the rhyolitic complexes of this formation, which define tholeiitic suites, gave zircon U-Pb ages ranging from 2718.7 ±0.7 Ma to 2716.2 ±0.8 Ma (McNicoll, in Pilote et al., 2009). The two sites dated by McNicoll (Pilot et al., 2009) are located at the base and top of this formation.﻿ This age distribution indicates that the Lanaudière Formation was emplaced in a relatively short period of time (approximately 2 Ma) and that it is only slightly older than the base of the Malartic Group, which has an age of 2714 Ma in the La Motte-Vassan Formation (Pilote et al., 1999, Pilote et al., 2000).

The ages obtained for the Lanaudière Formation, as well as the close spatial association observed between ultramafic lava and rhyolitic complexes, show significant similarities with the Kidd-Munro assemblage described on the Ontario side of the Abitibi Subprovince (Berger, 2002; Ayer et al., 2002; Thurston et al., 2008), host of the Kidd Creek volcanogenic massive sulphide mine (Bleeker et al., 1999).