Through his numerous systematic mapping campaigns, Weber (1947, 1951a, 1951b) laid the foundation for geological knowledge in the vast Amos-Landrienne area. His work, carried out between 1946 and 1950 in 18 quarters of cantons distributed among Barraute, Dalquier, Duverny, Figuery, La Morandière and Landrienne, contributed to a synthesis a few years later (Weber and Latulippe, 1964). In this work, the authors described in detail at scale 1:24 000, and on an essentially lithodemic basis, the various geological units encountered in this area. These volcano-sedimentary units were previously included under the general designation of the “Keewatin” type (Weeks, 1935, 1937).

Subsequently, Otis and Béland (1986) mapped the Senneterre-La Morandière-Rochebeaucourt-Carpentier area (different parts of sheets 32C12 and 32C11). Volcanic units were then included in the Lower Amos Formation, in accordance with the nomenclature established at the time by Imreh (1986). In the early 1990s, Labbé (1994) began mapping the vast Amos-Landrienne area, which included an update of the work of Weber and Latulippe (1964) and the geological synthesis of Imreh (1984). In this initial version of Labbé (1994), the Dalquier group was created. The latter was introduced informally, with the aim of characterizing lithological units previously associated with the Amos Group (Imreh, 1984; Otis and Béland, 1986), but with geochemical characteristics different from basalts of this group. The Dalquier Group consisted at that time of two distinct stratigraphic units: the Jonpol rhyolite and the Lac Arthur formation.

The first mention of the name “La Morandière formation” in the geological nomenclature is attributed to Labbé (1995). Thus, in the continuation of his 1994 work, Labbé (1995) redefined the Dalquier Group into two informal formations with distinct geochemical affinities: 1) the La Morandière formation, a basal unit that outcrops mainly in the half-centre of sheet 32C12 and consists mainly of basalt of tholeiitic affinity; and 2) the larger Lac Arthur formation (Labbé, 1994), consisting mainly of calc-alkaline andesite. The Jonpol rhyolite is then incorporated into the Lac Arthur formation.

In a synthesis of his work, Labbé (1999) proposes new formal stratigraphic subdivisions, now including the Lac Arthur and La Morandière groups, which were previously informal formations within the Dalquier group (Labbé, 1995). The name “Dalquier group” is then abandoned.

The name of the unit refers to the canton of La Morandière, of which the La Morandière Group occupies a large part.

Units composing the La Morandière Group, which are included in the southern part of the Taschereau-Amos-Senneterre segment, were described on the basis of the work of Cooke et al. (1931), Weeks (1935), Tremblay (1956), Webber and Latulippe (1964), Imreh (1979, 1984), Vogel and Keating (1979), Ciesielski (1980), Hébert (1981, 1982), Otis and Béland (1986), Labbé (1994, 1995, 1999), Faure (2016) and the work of the Ministère. This group consists of tholeiitic basalt, felsic to intermediate volcaniclastics, terrigenous and chemical sedimentary rocks, interstratified with differentiated, subconformable, ultramafic-mafic to dioritic intrusive rocks. Regional metamorphism reaches the greenschist facies. 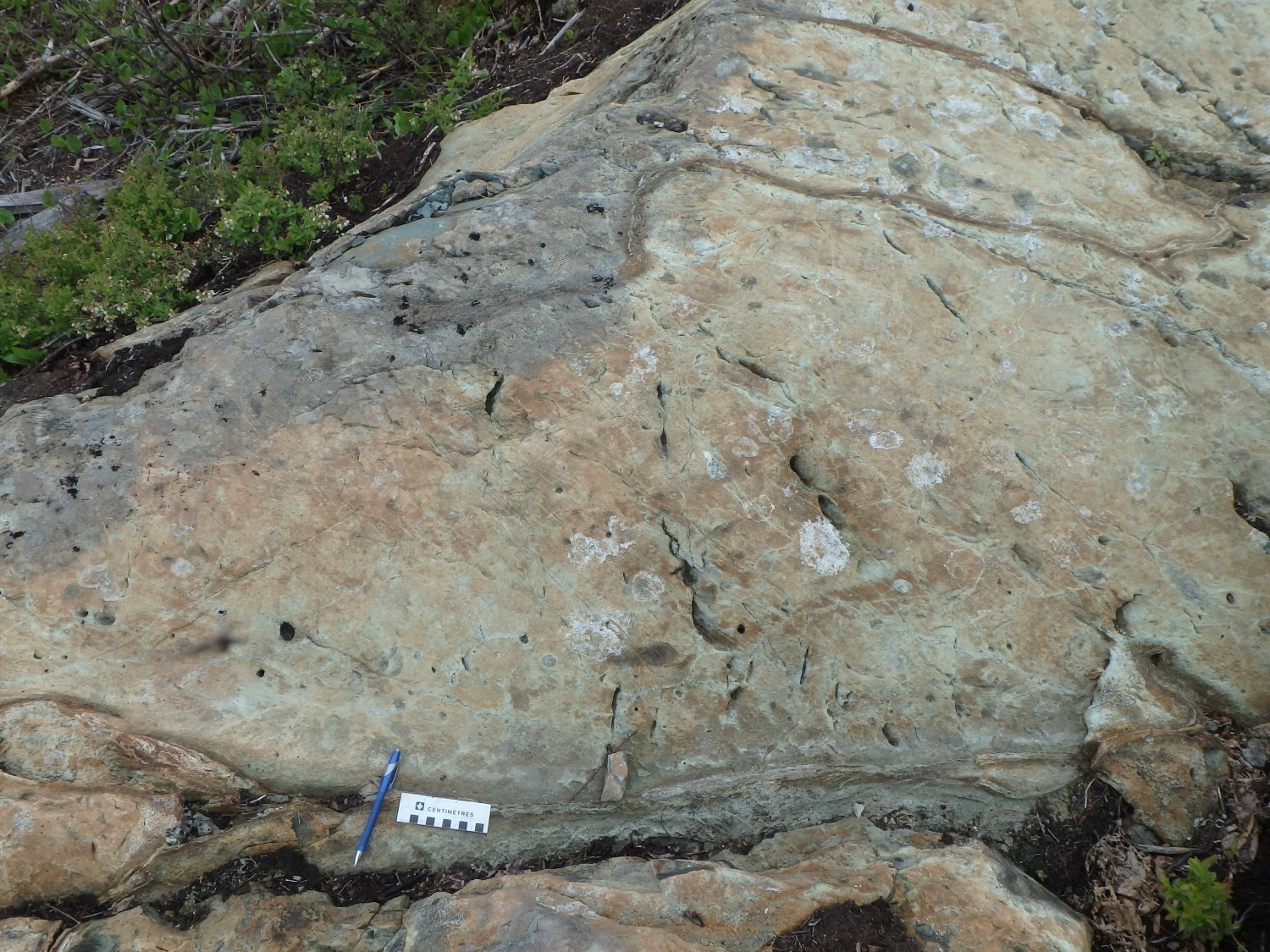 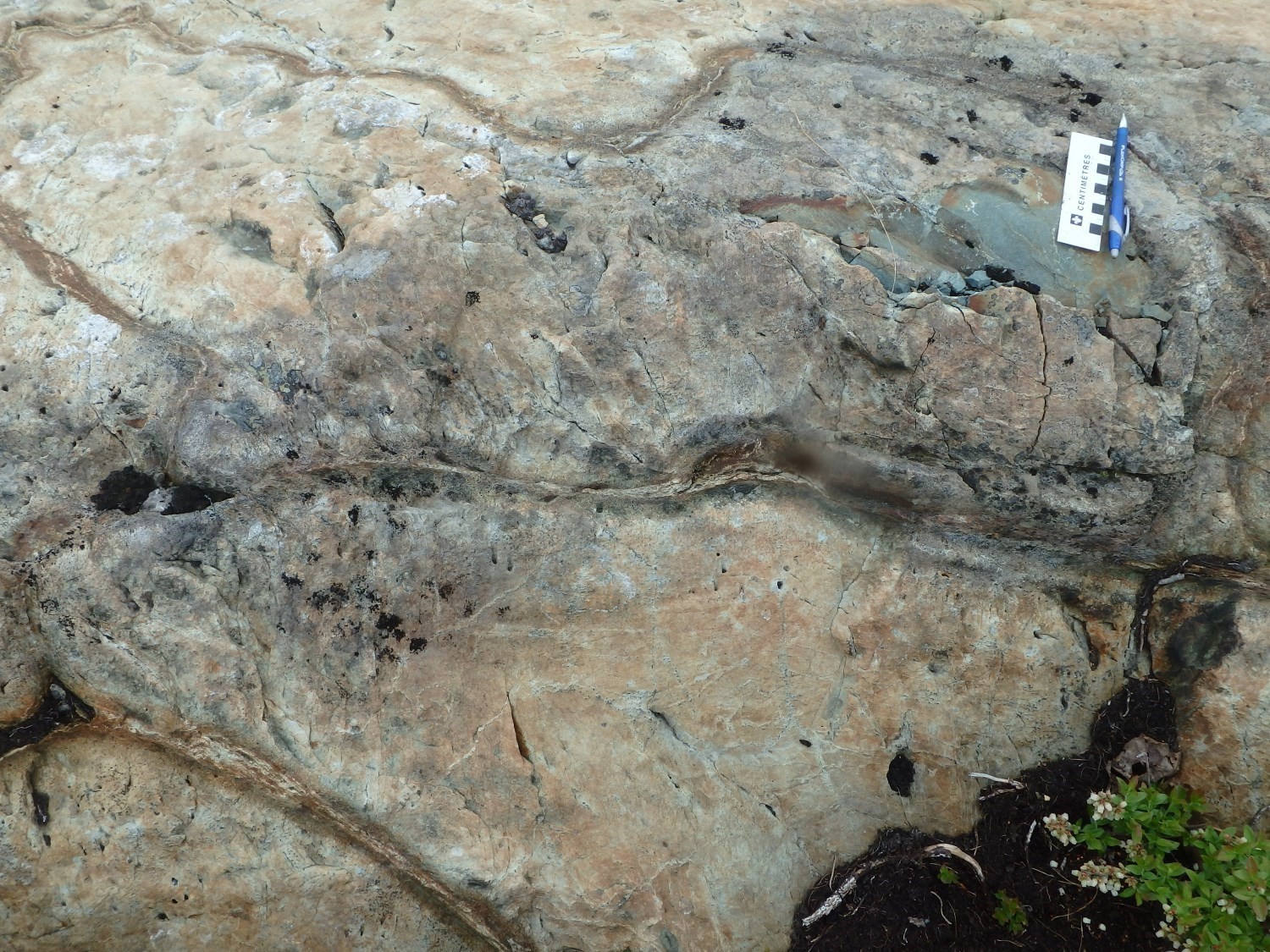 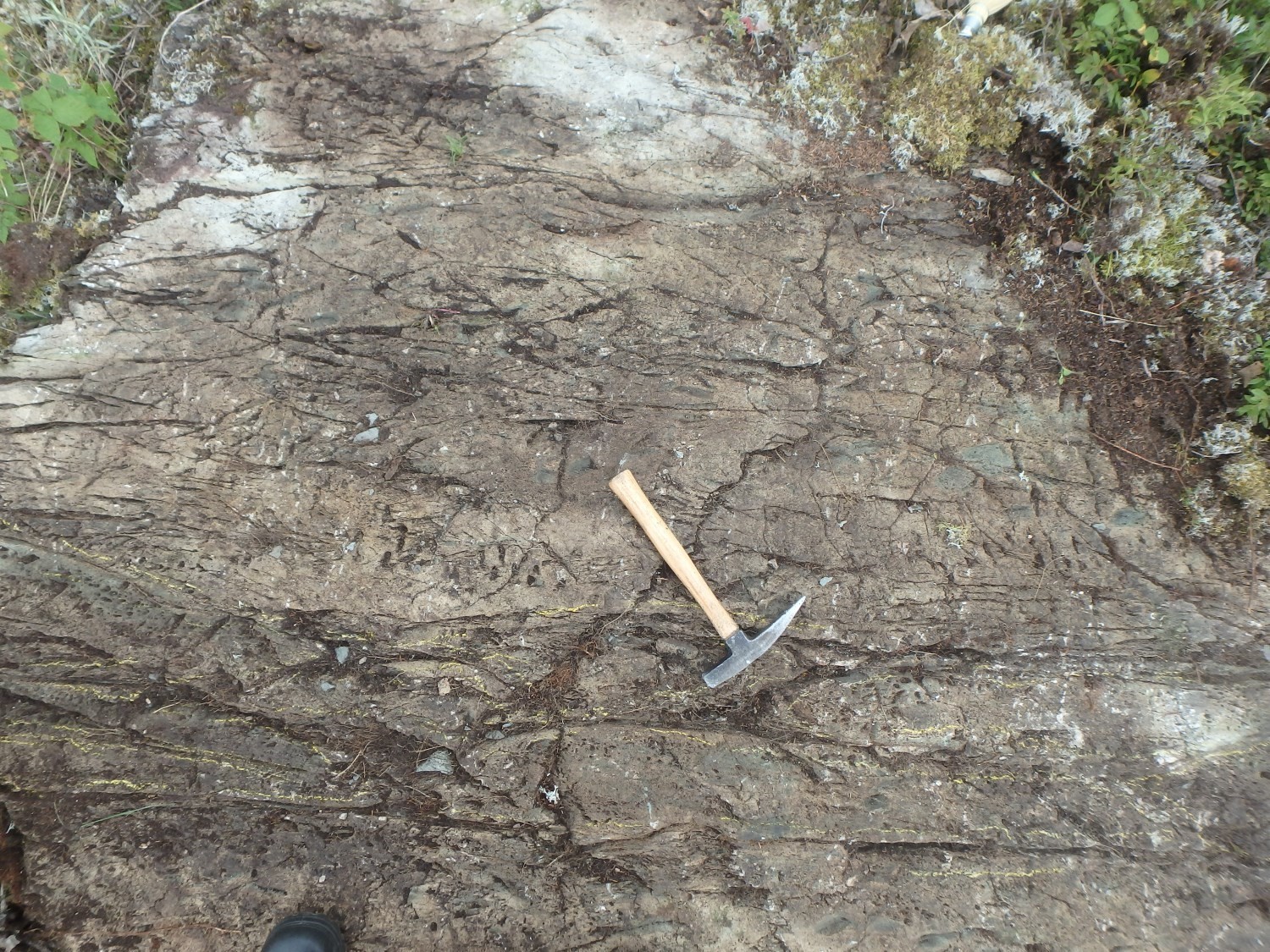 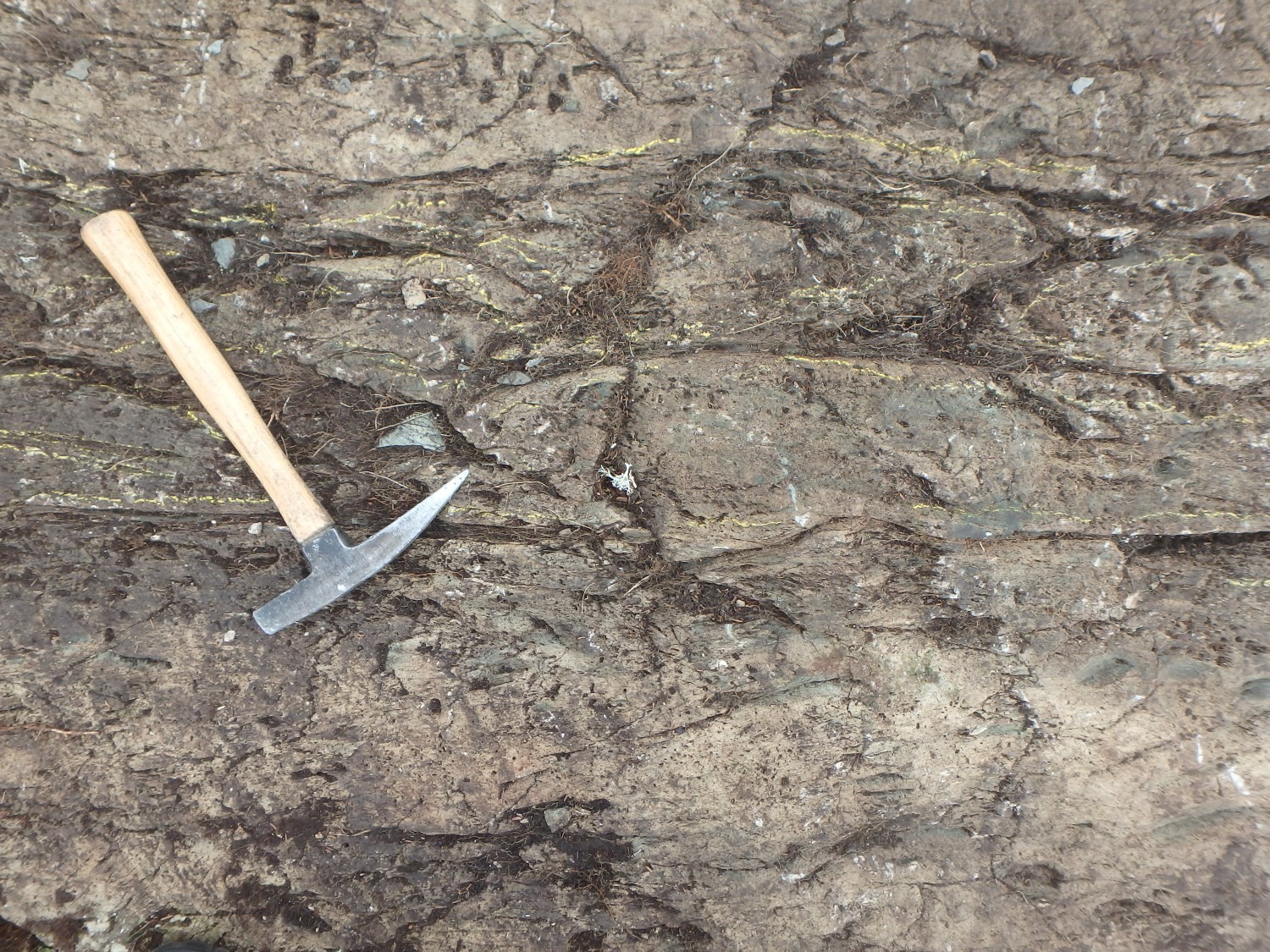 Basaltic volcanic rocks form the main unit of the La Morandière Group (outcrops 19-PP-390 and 19-JM-534). Basalt has a tholeiitic affinity (Labbé, 1995, 1998; Pilote et al., 2020) and display pillowed and massive morphofacies. The rock is commonly vesicular, which allows defining robust polarity criteria. On outcrops, these lithologies are whitish green in altered surface and greenish-grey in fresh exposure. The colour of the alteration patina may locally cause some confusion with andesite. Pillows have a length of ~1 m and borders ~5 cm thick. The rock is fine grained. Flows are oriented WNW-ESE and have a dip of 60° to 75° northward. Their magnetic susceptibility is low and homogeneous (Geological Survey of Canada et al., 2009). The regional schistosity observed varies from weak to moderate and its dip is steep northward.

The La Morandière Group contains some discontinuous graphite/argillite tuff beds, mainly distributed in its eastern half, particularly in the NE quarter of sheet 32C12. The thickness of these tuff beds varies from 1 m to >10 m. They are composed of varying amounts of fine-grained felsic volcaniclastic material. These layers are commonly stratified and very well foliated. They are rich in graphite and pyrite. These lithologies have been observed in drilling by Latulippe (1963, drilling L-51) and Sirois (1985), as well as in outcrops by Weber and Latulippe (1964) and Otis and Béland (1986). These tuff beds, which locally border the contacts of ultramafic-mafic sills (units nAmr2 and nAmr3; Sirois, 1985), are particularly well illustrated on airborne geophysical surveys by a series of INPUT-type electromagnetic anomalies (Geological Survey of Canada et al., 2009). 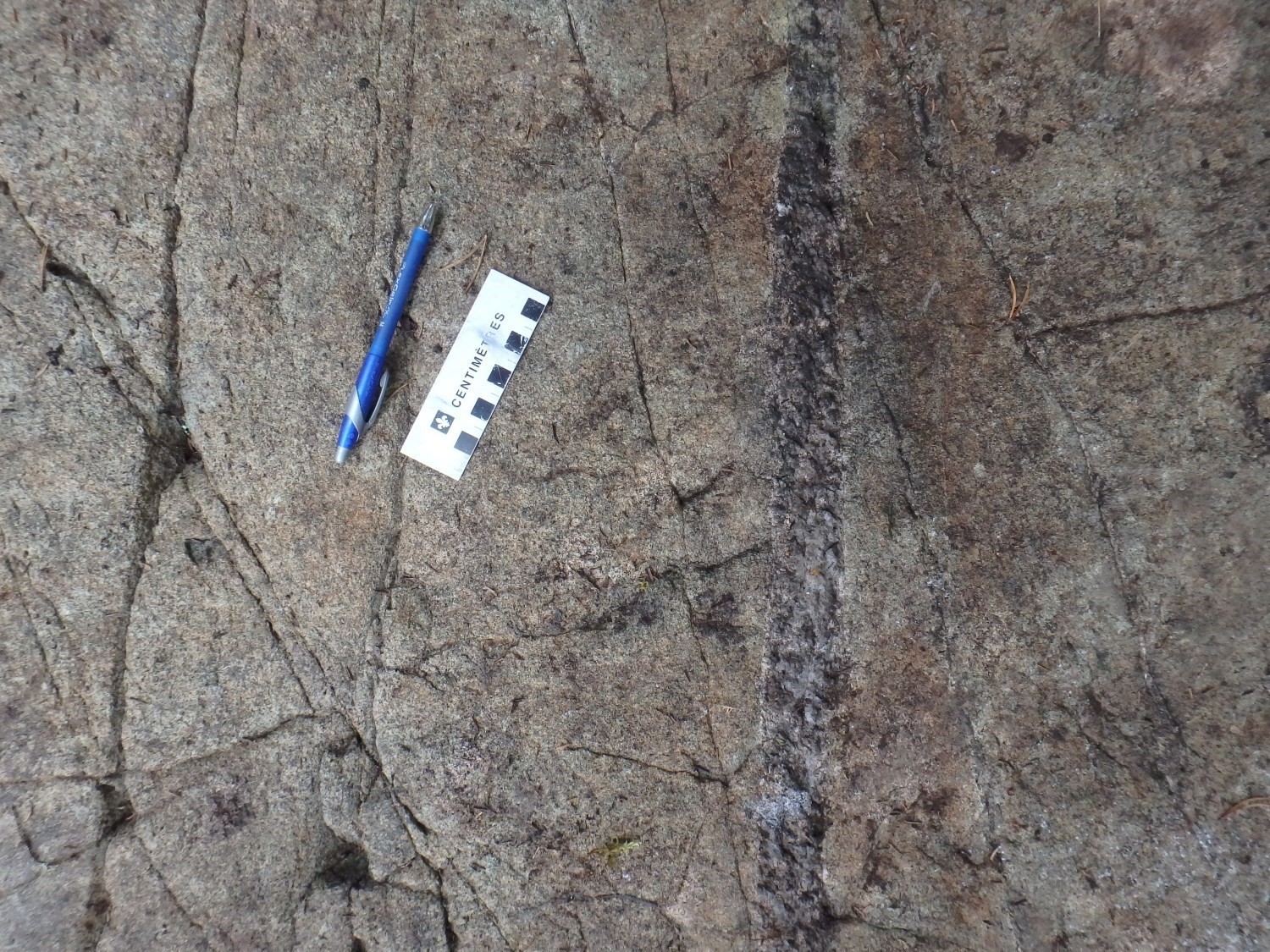 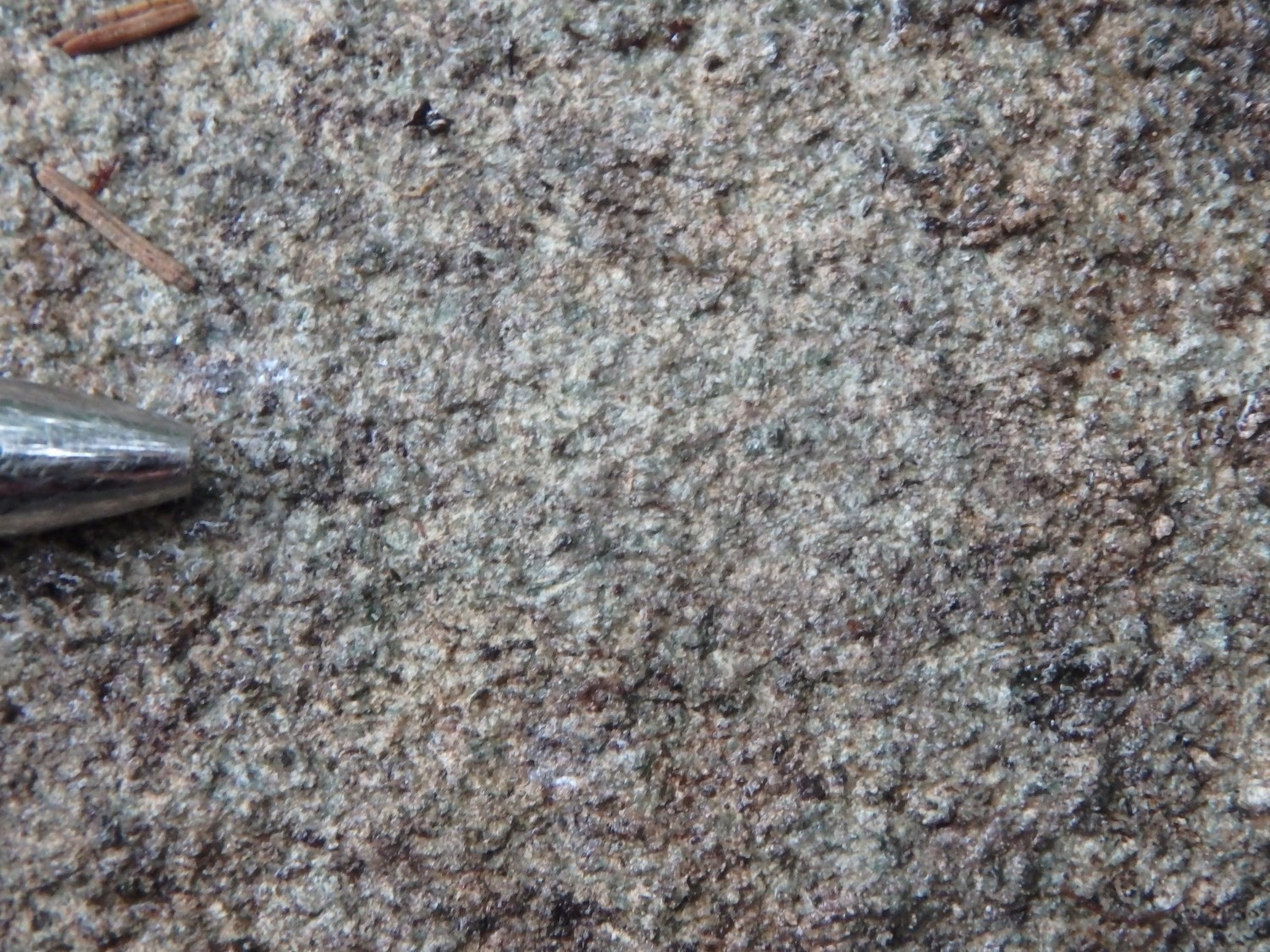 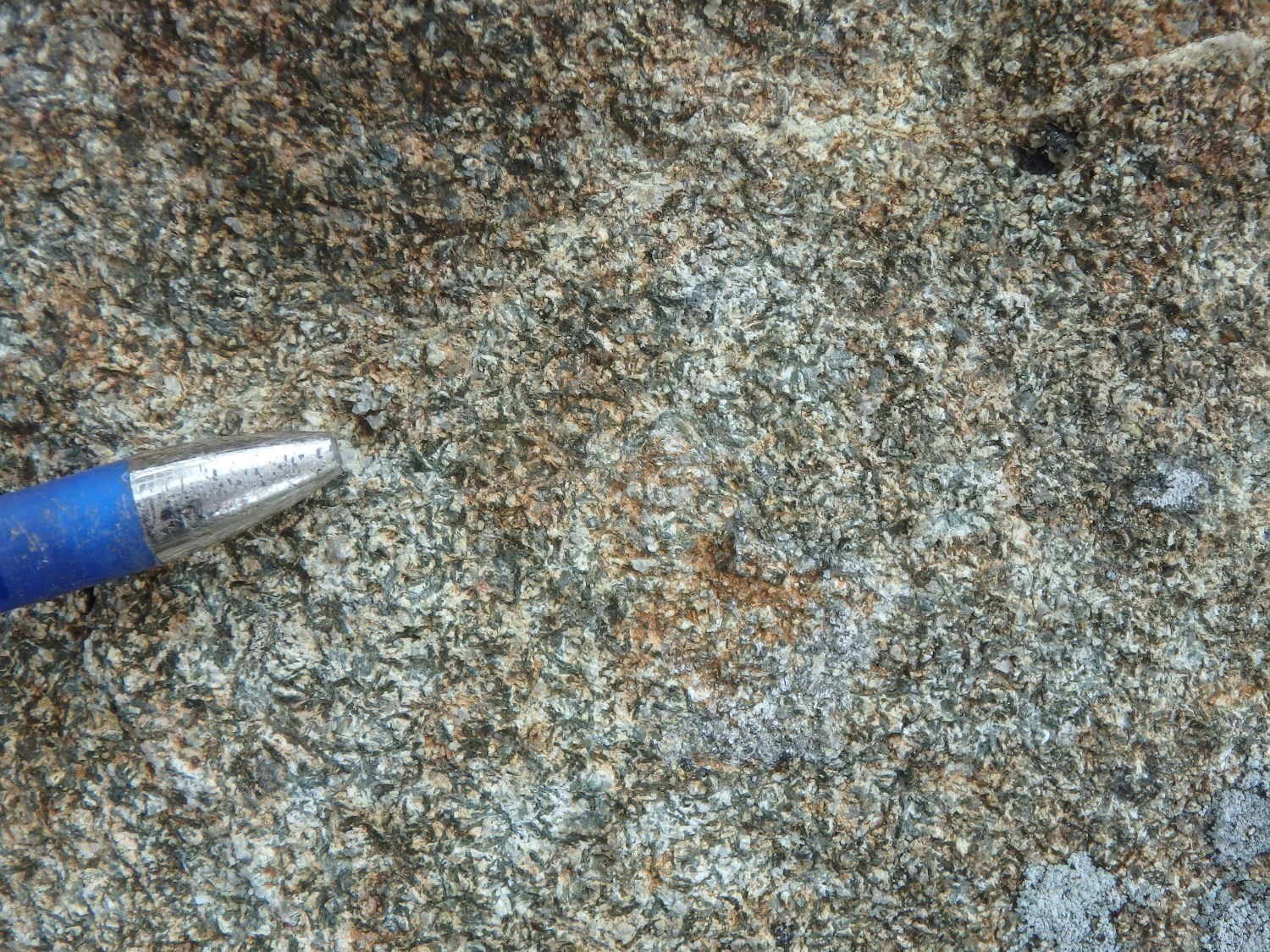 ﻿Representative gabbro outcrops for this unit are the following: 19-JM-615 and 19-JM-533. The rock is massive, medium to coarse grained and even grained, the grains being millimetric in size. It is brownish grey in altered patina and dark grey-green in fresh exposure. This gabbro has both ophitic and glomerophyric textures. It is mainly composed of feldspar, pyroxene and amphibole. The plagioclase content varies from 20% to 35% and that of hornblende from 15% to 20%. Textures observed vary from subophitic to ophitic. Gabbro is locally chloritized, epidotized and carbonatized. It is subconformable to stratification interpreted in adjacent volcanic rocks.

Gabbro layers appear to be preferentially distributed in the eastern half of the de La Morandière Group (Weber and Latulippe, 1964). This interpretation is probably based on existing outcrops, which are sparse and visited at the time by Weber and Latulippe. Gabbro sills are relatively thin and homogeneous, and their maximum thickness is of the order of a hundred metres. Their magnetic susceptibility is highly variable, but generally slightly higher than that of adjacent volcanic units. A review of the regional aeromagnetic map (Geological Survey of Canada et al., 2009) reveals that a much more homogeneous distribution of gabbro should be expected over the entire surface area of this group.

This group contains an ultramafic sill, historically well represented in the work of Weber and Latulippe (1965). This sill does not outcrop and has only been observed in drilling (Bérubé, 1959; Sirois, 1985). It is located in the east-central part of sheet 32C12. Its northern contact is bordered by sheared graphite tuff belonging to unit nAmr1. This sill is conformable with the regional orientation of host rocks.

According to Bérubé (1959) and Sirois (1985), this sill contains numerous peridotite and pyroxenite sills and dykes having an ophitic texture, probably representing multiple intrusions into adjacent mafic-ultramafic units. The peridotite is dark green to black, massive and medium grained (0.5-2 mm). It is strongly serpentinized and cut by numerous chrysotile and magnetite veinlets 1-5 cm thick and, more locally, by quartz-carbonate veinlets. It is composed of uralitized pyroxene, plagioclase and magnetite. The unit is chloritic and strongly magnetic. Carbonatization is more pronounced near the contacts. Rhythmic bedding, or possible magmatic banding, is demonstrated by alternating layers of pyroxenite and gabbro. The plagioclase content also varies greatly over a short distance to make up 30% to 55% of the rock. Brecciation seems to affect the rock locally and is visible through gabbro enclaves contained in pyroxenitic zones.

The magnetic susceptibility of ultramafic phases of this sill is very high and makes it easy to visualize their traces and extents on aeromagnetic surveys (Geological Survey of Canada et al., 2009).

The La Morandière Group is generally oriented WNW-ESE. It is mainly located in sheet 32C12 (Eastern Abitibi area), slightly north of the town of La Morandière. It extends from the south of Lac Castagnier to ~10 km NE of Barraute.

The La Morandière Group is affected by two regional P1 folds oriented WNW-ESE, namely the Soma Anticline and Trinity Syncline. The dips of these axial planes are subvertical to slightly overturned southward. The axial plane of the Soma Anticline plunges eastward. The latter is located in the half-south of the La Morandière Group. It is the polarities of pillows that allow highlighting this anticline.