The felsic, mafic and ultramafic volcanic rocks of the Upper Eastmain Greenstone Belt were described in the works of Hocq (1985), Roy (1985, 1988), Couture (1986, 1987a, 1987b, 1987c, 1993) and Couture and Guha (1990). In this work, the authors included all of these rocks within the René Group. No formations had been individualized. Following mapping and geochronology work in the Bohier Island and Cadieux Lake areas, Beauchamp et al. (2018) and Beauchamp (2019) divided the René Group into four (4) formations, each corresponding to a volcanic event. The Érasme Formation was introduced to define the rocks belonging to the René Group first cycle (Mesoarchean age).

The Érasme Formation is the René Group’s oldest. It is divided into five (5) informal units. Unit mAerm1 consists mostly of basalt. The porphyritic basalt facies was individualized in the mAerm1a subunit. The basalts are interbedded with several horizons (<50m thick) of felsic and intermediate ash, lapilli and block tuff, and felsic volcanics (mAerm2). Unit mAerm3 includes the gabbros, while the mAerm4 unit represents the ultramafic Sills.

The volcanic sequence of the Érasme Formation is intruded by several types of dykes including porphyritic andesitic dykes, aphanitic felsic dykes, and felsic dykes with quartz eyes and plagioclase phenocrysts. In the Eastmain Mine area, porphyritic granodioritic dykes and sills were interpreted by Eastmain Resources (Frappier-Rivard 2015). These felsic intrusions, which were not observed during the Ministère de l’Énergie et des Ressources naturelles (MERN) mapping work, were intercepted in drilling (Frappier-Rivard, 2015).

The Érasme Formation hosts several gold deposits (Eastmain Mine – Zones A, B and C; Lac Julien; Hillhouse-Lac Julien-SE; Ola River) along the same stratigraphic horizon. These mineralizations are contained in a characteristic lithological package known as the “Mine Series package”. The Mine Series Package consists of a subplanar assemblage of felsic rocks (tuffs and flows), mafic flows, and altered and deformed ultramafic sills that dip 35° to the northeast (Frappier-Rivard 2015). The gold horizon is included in recrystallized and mineralized cherty horizons associated with massive to semi-massive sulphide lenses (pyrrhotite, pyrite, chalcopyrite, sphalerite) and silicified zones in felsic, mafic and ultramafic rocks. The Mine Series Package, which was plotted laterally for 10 km in a NW-SE direction, is a marker level for gold mineralization in the Bohier Island area.

The mafic effusive rocks, which represent the dominant lithology of the Érasme Formation, have a dark-green colour in fresh exposure and altered patina. The mineralogical composition of these submarine lavas is relatively constant. They contain 50 to 80% green amphibole (hornblende and/or actinolite), 10 to 35% low to strongly damouritised plagioclase, 5 to 10% quartz, 5 to 10% epidote (pistachite, zoisite and clinozoisite) with varying amounts of sphene, biotite, muscovite, chlorite, calcite, zircon, magnetite, ilmenite and opaque minerals (including sulphides). Amphiboles are represented by hornblende, more rarely by actinolite. The more metamorphosed basalts contain hornblende porphyroblasts, commonly poeciloblastic, which are retrograded to epidote and chlorite. Actinolites are twinned and radial. Basalts are commonly cut by variously altered veins made of quartz, calcite, epidote, chlorite, amphibole and/or tourmaline. On the vertical gradient map of the residual total magnetic field, the majority of basalt flows are not magnetic, but some are. These magnetic flows, which form NNW-SSE to NW-SE oriented lineaments, define stratification. Basalts of the Érasme Formation have retained several primary volcanic structures. Pillows are well preserved and very common. 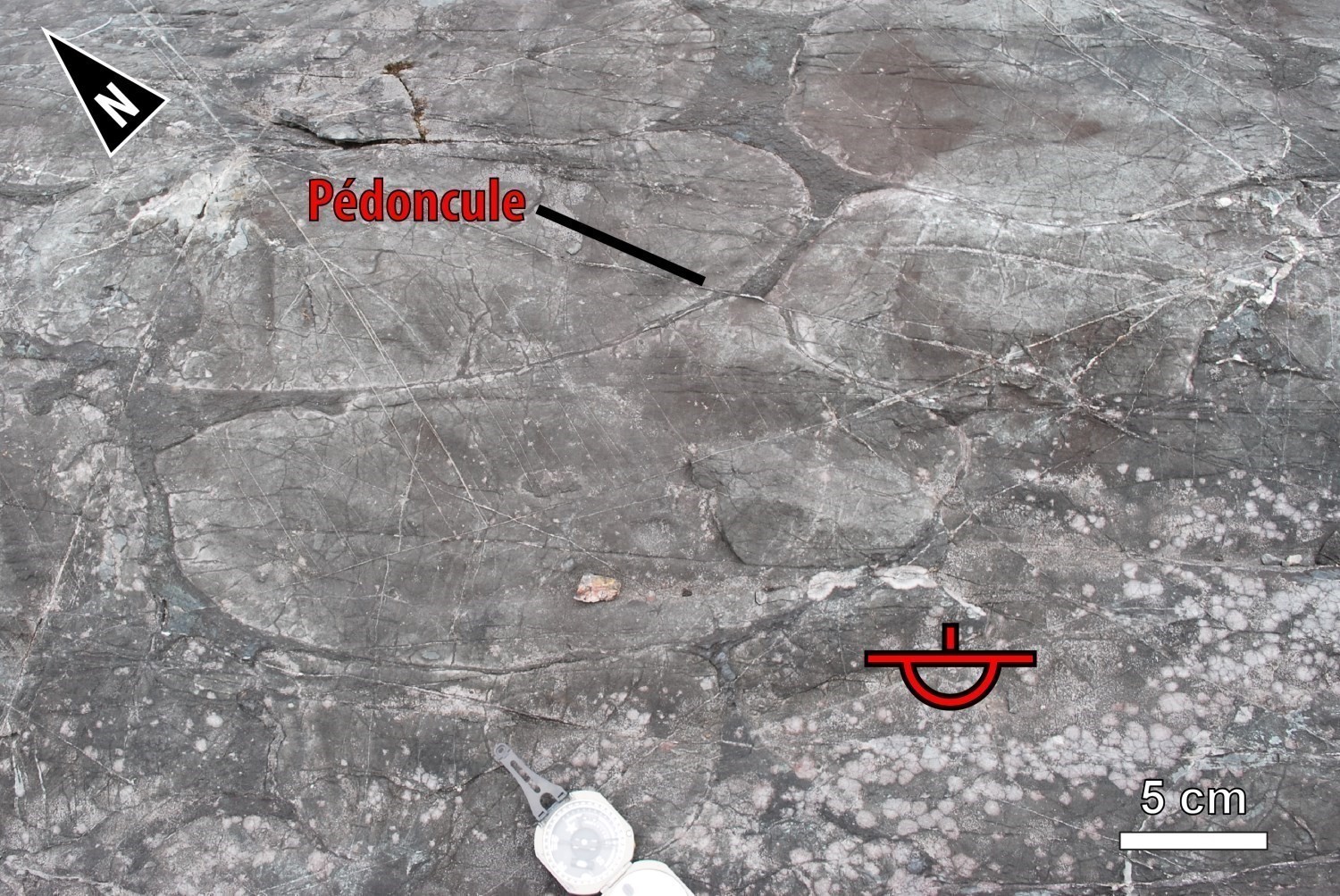 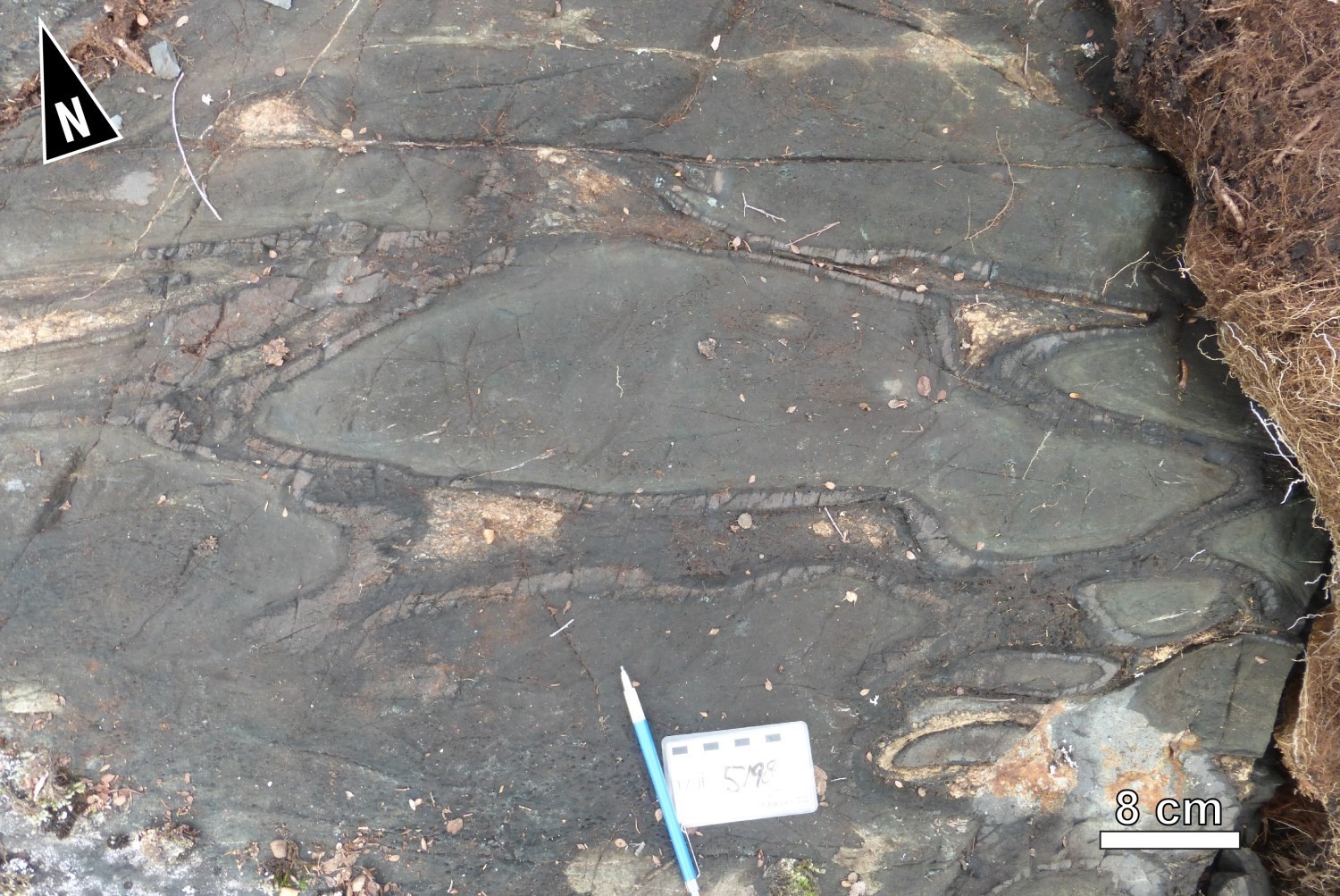 Peduncles, which are located at the base of the pillows, indicate a reverse stratigraphic polarity that is systematically oriented towards the SW or SSW in this unit. Pillows are commonly joint, flattened, and the edges are altered in carbonate, sericite and epidote. A few radial joints and quartz chambers filled with quartz are present in the pillows. Other volcanic structures, less common, are preserved in the mAerm1a unit: pillow breccias, massive flows and isolated pillows. Pillow breccias contain hyaloclastic material between fragments of pillows (Roy 1988). Massive flows have no volcanic structure and are difficult to distinguish from some gabbro outcrops. Some facies depicting unit mAerm1a basalt were not isolated as a geological area on the map. These are the amygdaloidal facies, the porphyritic facies and the brecciated facies that is fractured by hydrothermalism. The amygdaloidal facies is characterized by subrounded cavities, 0.1 to 0.5 cm, filled with alteration minerals. These amygdules, observed at the macroscopic and microscopic scale, are filled with epidote, calcite and sericite. The porphyritic facies is distinguished by the presence of 3-10% low to moderate damouritised plagioclase phenocrystals in a finer matrix. The brecciated facies fractured by hydrothermalism is characterized by the presence of 10 to 30% filled fractures. Some dark-green fractures are composed of hornblende that is coarser than the matrix. Other light fractures, white to beige, are filled with quartz ± epidote ± calcite. 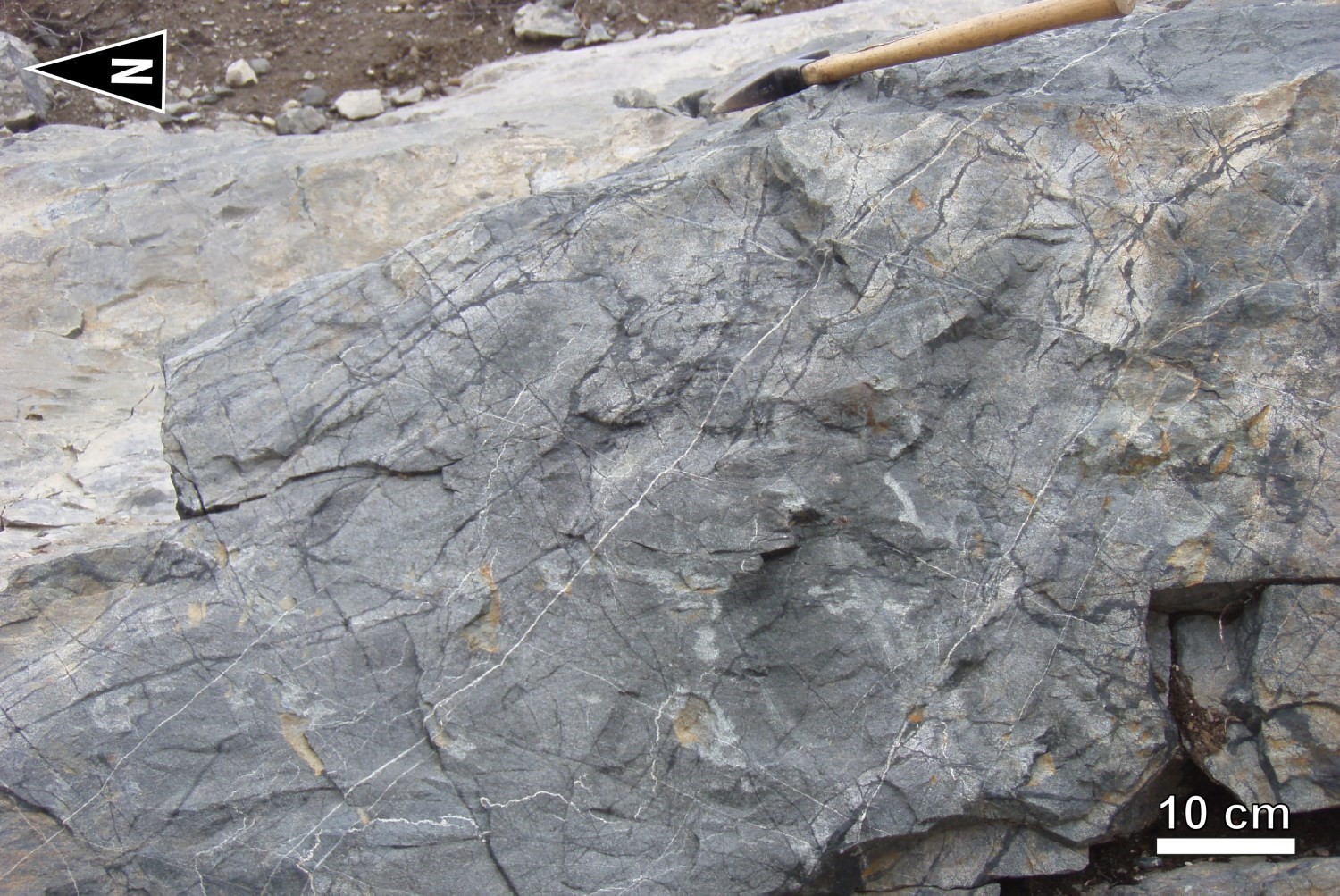 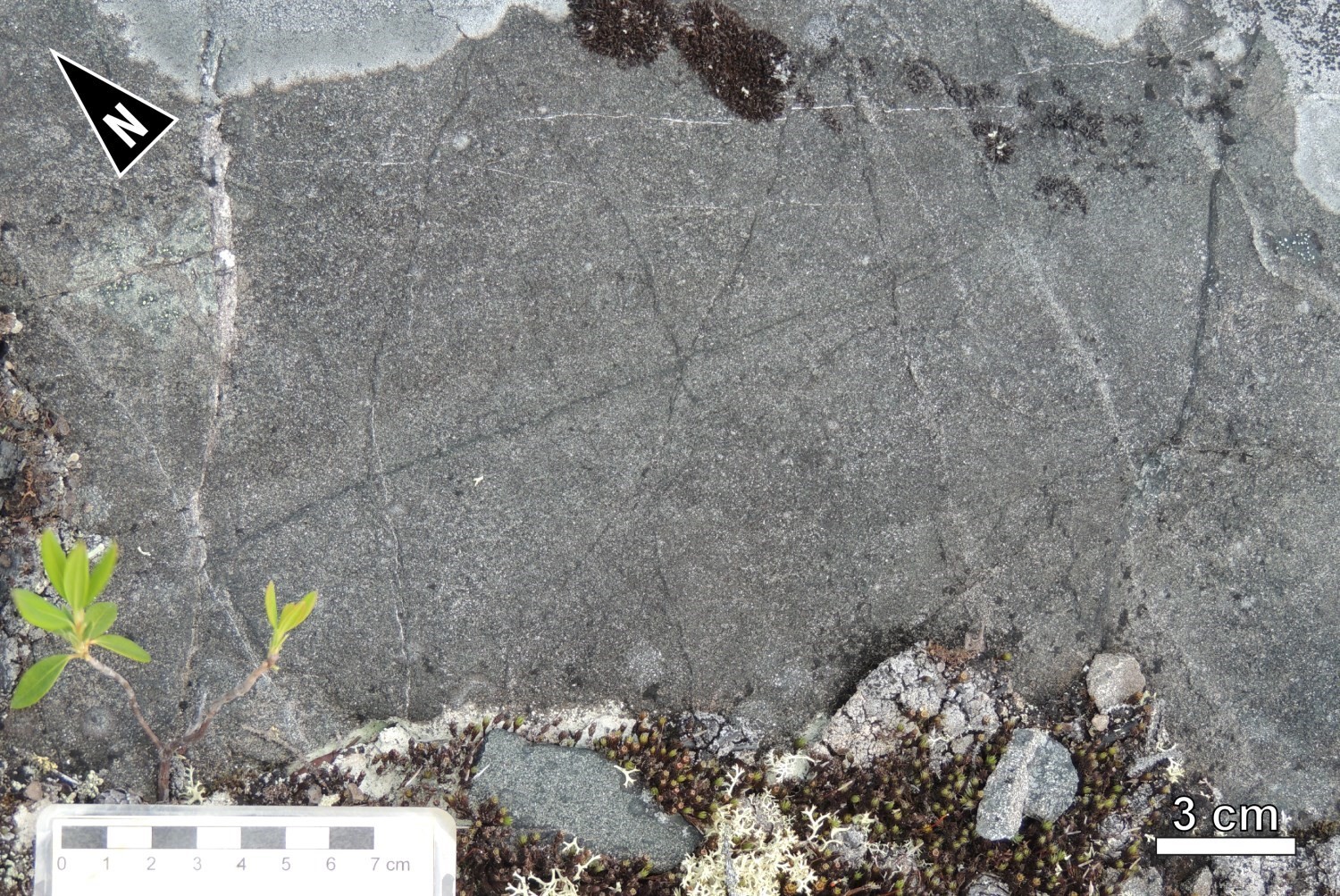 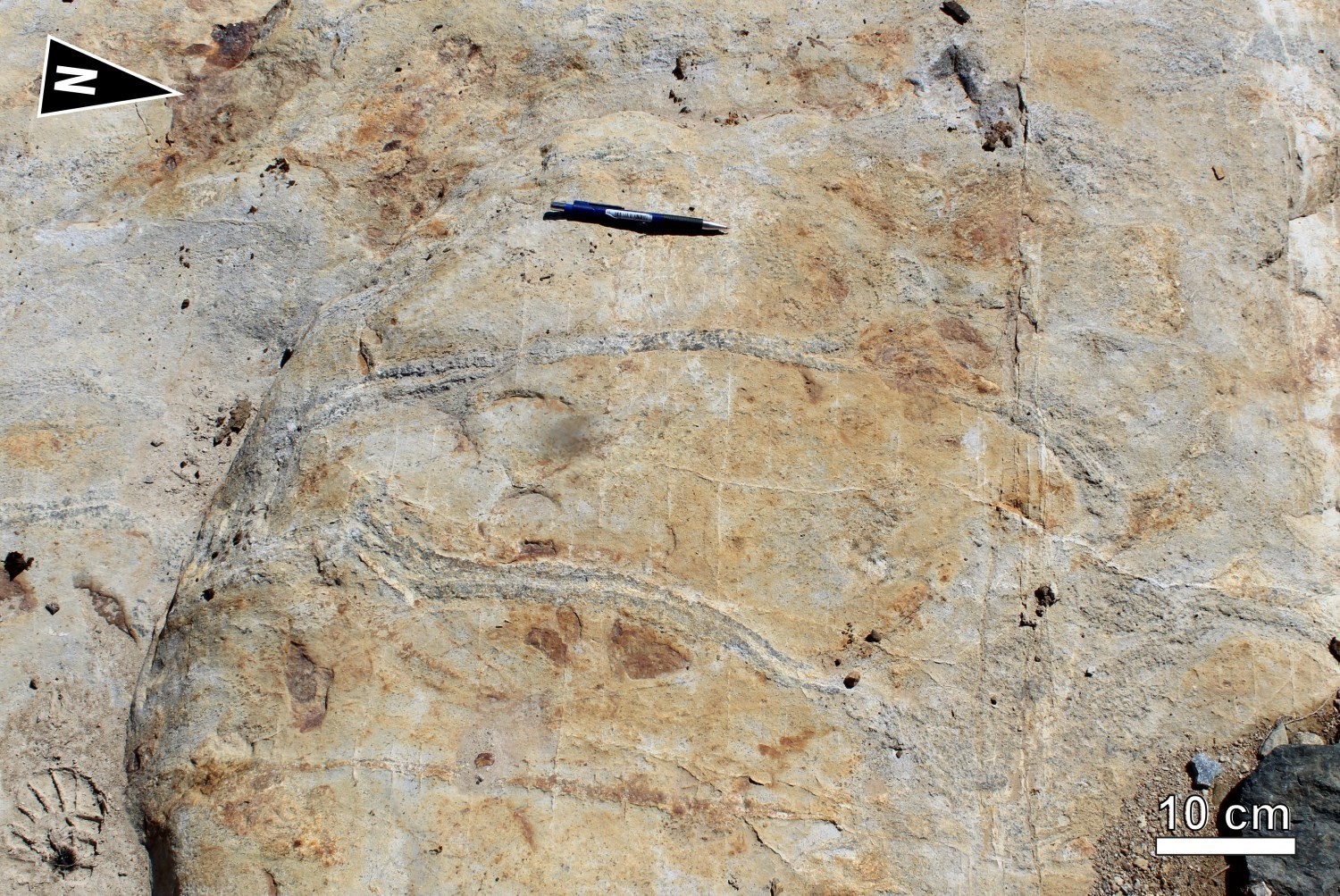 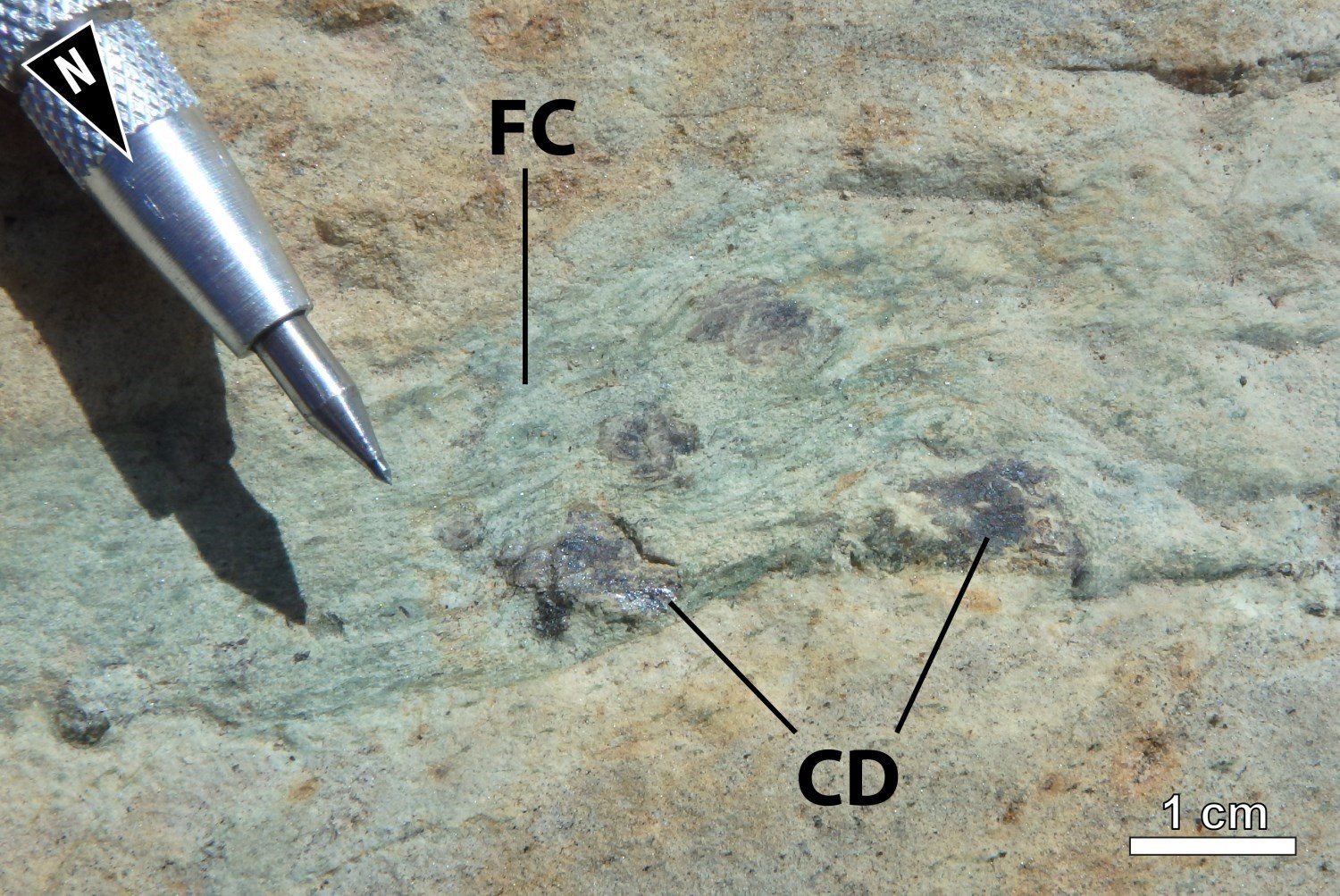 Basalts of the Érasme Formation, especially those near and in the Mine Series Package, exhibit various hydrothermal alterations. The most common are silicification, chloritization, carbonatization, sericitization and biotitization. The 17-JM-6008 outcrop, which corresponds to the Susanna showing (Eastmain Resources), exhibits an area of intense and penetrative alteration within the mAerm1 unit. The outcrop shows a bleached pillow basalt, completely altered in silica, sericite, biotite and fuschite. There is also 25% low pinitised poeciloblastic cordierite in the edges and in the hearts of the pillows. This subalcaline basalt is characterized by an alteration rich in Si-Al-K-Cr which is typical of that observed near several metamorphosed massive volcanogenic sulphide gold deposits. 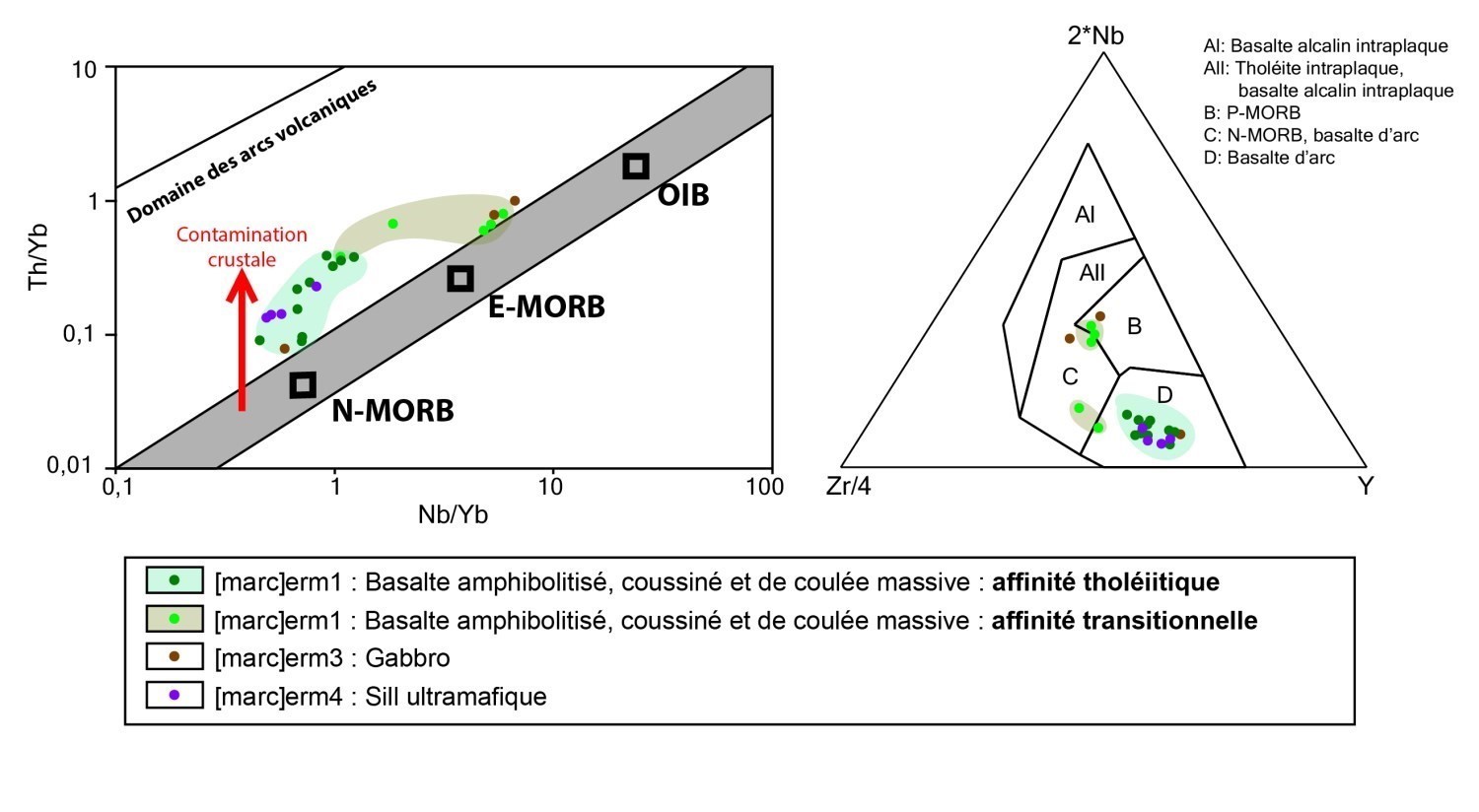 From a geochemical perspective, the diagram of Winchester and Floyd (1977) shows that the samples of mafic effusive rocks are located in the fields of andesitic basalt and subalkaline basalt (3-10 wt. % MgO). Some basalts are magnesian (10-12.5 wt. % MgO). They contain 47-58 wt. % SiO2, 3-12.5 wt. % MgO, 0.6-1.9 wt. % TiO2 and 38-136 ppm Zr. They are of tholeitic to transitional affinity. Tholeitic basalts are characterized by flat rare earth profiles (La/Yb = 0.7 to 2.2; gd/Yb = 1 to 1.3; normalised to Chrondrite CI; McDonnough and Sun, 1995) and Zr/Y ratios of 2.2 to 3.3. Transitional basalts have fractionated profiles showing light rare earths enrichment (La/Yb = 2.2 and 5.3; gd/Yb = 1.2 and 1.6) and have Zr/Y ratios between 4.1 and 5. Transitional basalts were only identified near the Tourigny Deformation Zone (1989) and Eastmain Mine mineralized corridor (Zones A, B, C). This subunit is not mappable in size at our work scale, but it seems to follow stratification and provides a reference horizon that is located within the structural roof of the Eastmain Mine mineralization. Discrimination diagrams of geotectonic environments indicate a formation environment similar to that of N-MORB and island-arc tholeites for tholeitic basalts. An E-MORB source is proposed for transitional basalts. The Pearce diagram (2008) and Nb-Ta anomalies on the spider diagram suggest that basalts of the Érasme Formation have undergone crustal contamination.

The felsic and intermediate ash, lapilli and block tuffs and felsic volcanics (mAerm2) form thin bands (<50m) that are interbedded between mafic flows. These are units with several heterogeneities in the mineralogical composition of their matrix, and in the fragments they contain. The tuffs are bedded and show evidence of graded bedding. 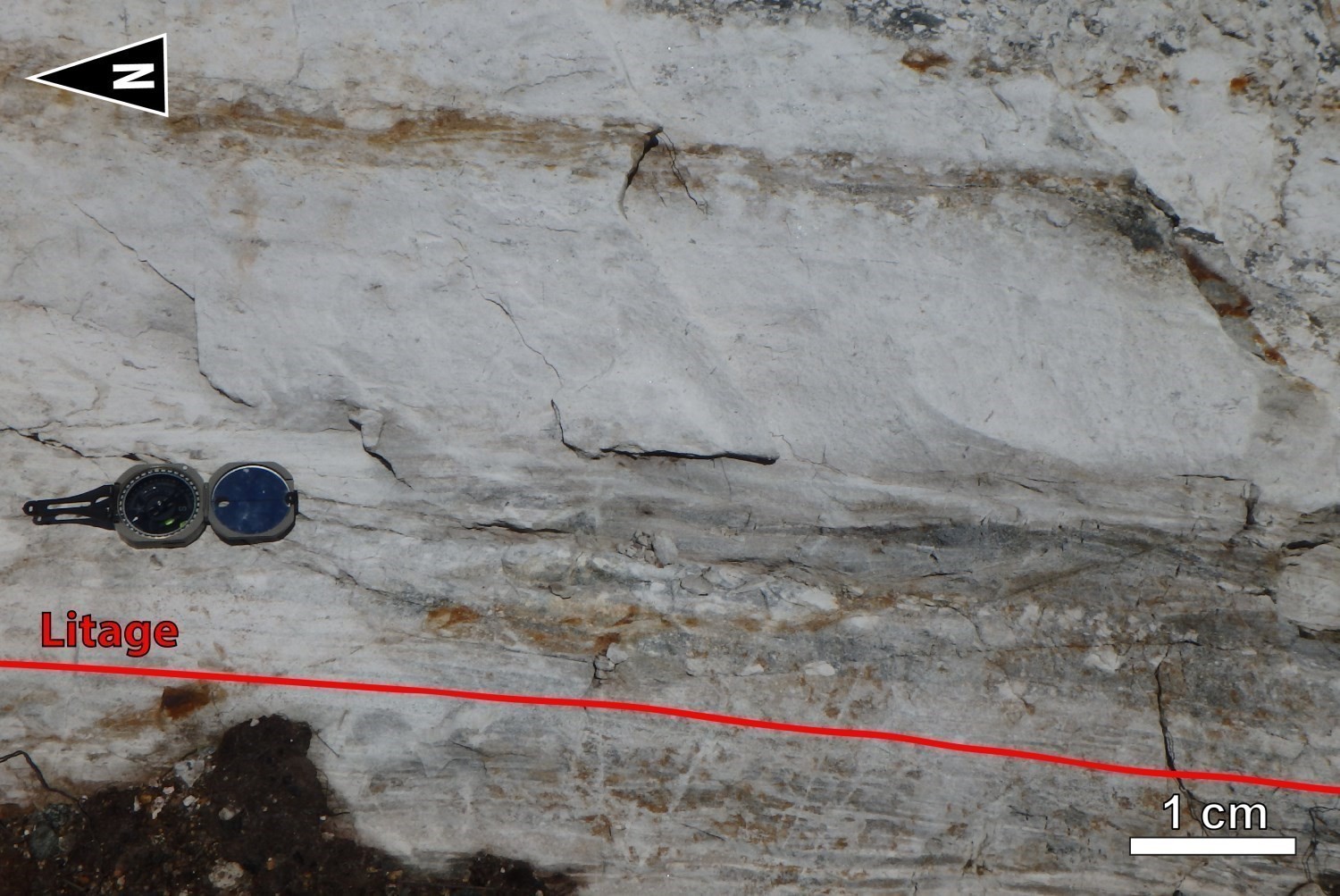 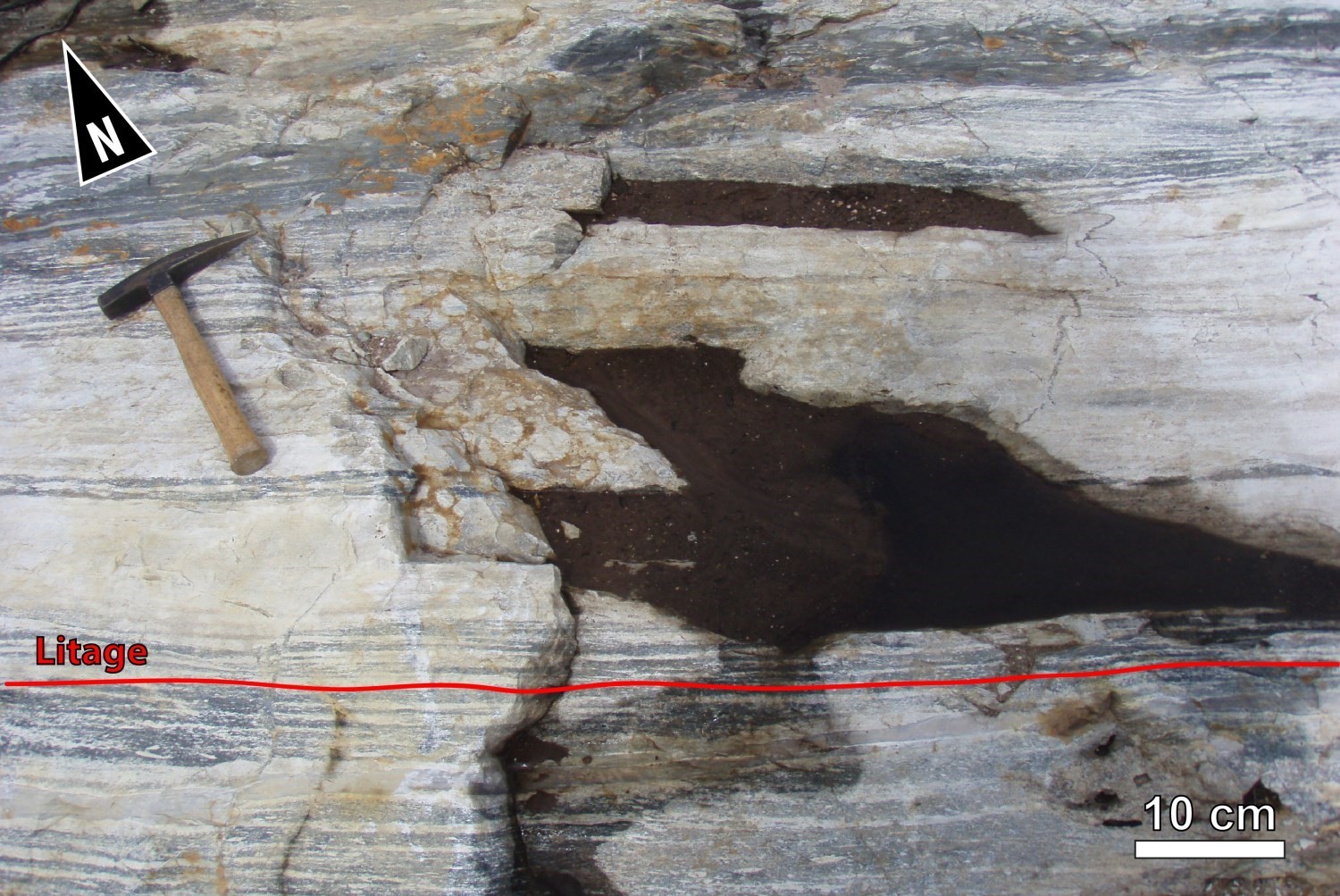 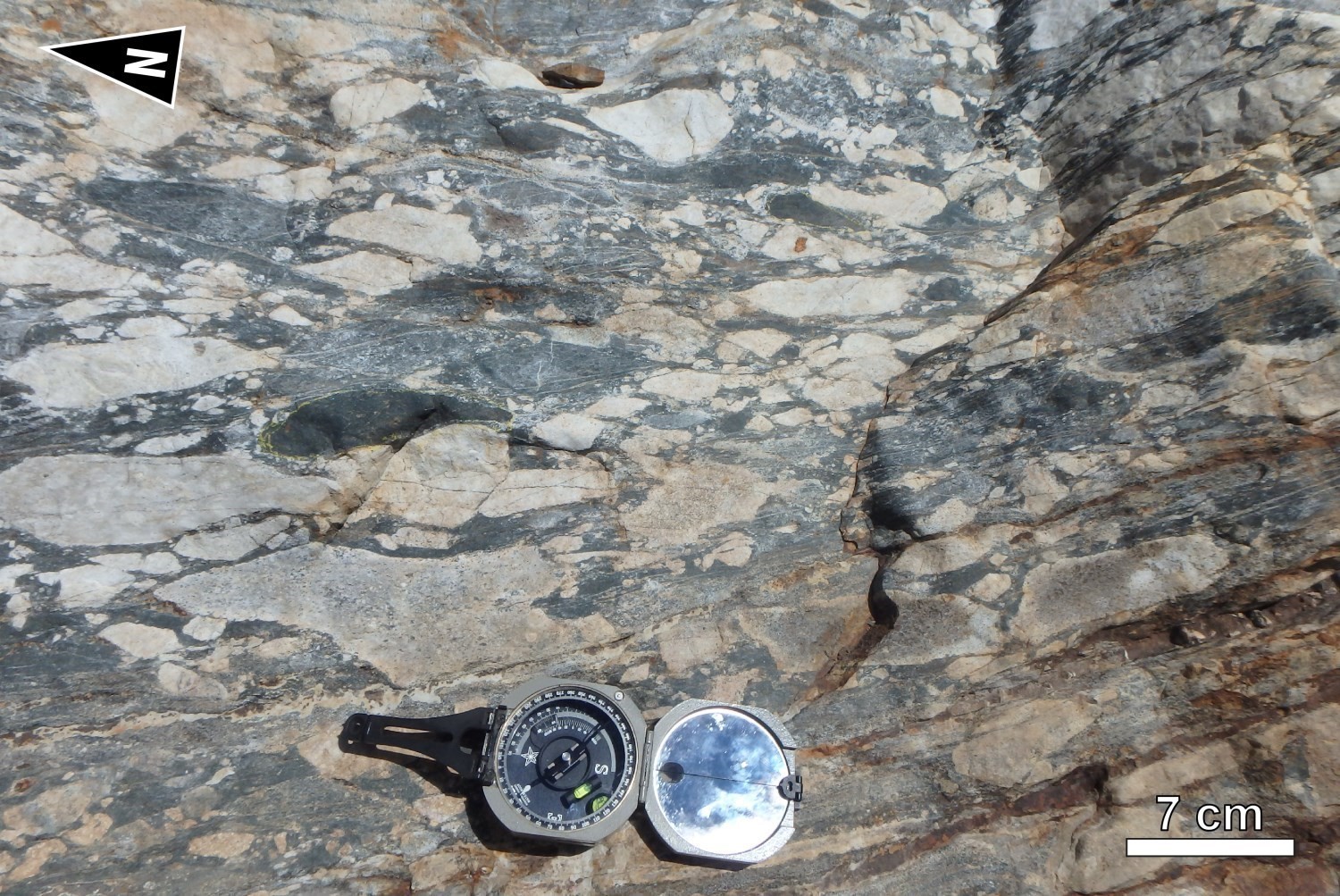 The Hillhouse deposit (outcrop 17-JM-6010) shows the rapid succession of volcanoclastic facies. A semi-massive sulphide horizon (pyrrhotite, pyrite, chalcopyrite, sphalerite), which is between 50 cm and 1 m, is located at the base of a horizon of intermediate to felsic fragmentary rocks. This horizon, which is an average of 15 m thick, is composed of a block tuff that moves to a lapillite tuff, an ash tuff, and then to a stratified ash and lapilli tuff. At the top of the stratigraphy is a massive fractured basalt of tholeitic affinity. The block tuff contains angular joint fragments of beige-white volcanic rock up to 30 cm, and some intermediate and mafic fragments containing sulphides.

Felsic volcanics are distinguished from volcaniclastic rocks by their lack of stratification and fragments. These rocks have a light grey shade are fine-grained, even aphanitic, and have conchoidal fractures. They are predominantly composed of quartz and plagioclase and show 2-5 % millimetric eyes of smoked quartz and varying amounts of biotite and muscovite.

Gabbros form sills or dykes. They are generally slightly foliated and are medium-grained. Hornblende, damouritised plagioclase, epidote and sphene are the main components of this unit. Some amphiboles replace older pyroxene phenocrystals. 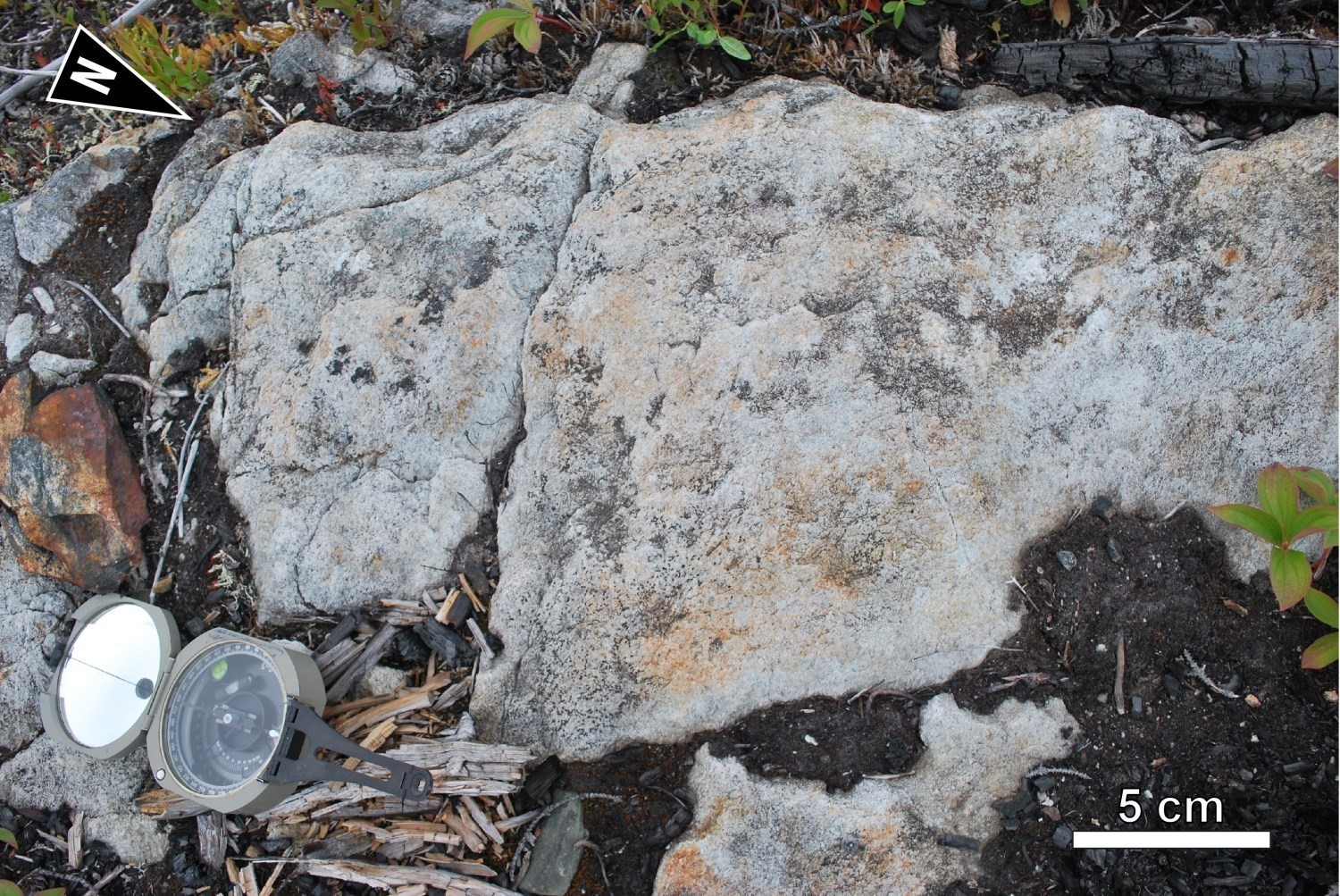 Some ultramafic sills are interbedded in the stratigraphic sequence of the Érasme Formation. It is possible that the Érasme Formation also contains horizons of ultramafic volcanics (komatiitic lava), but no volcanic structure has been observed (neither in outcrop nor in thin section) to confirm this hypothesis. The deformation and weathering of these sills is such that the majority of the primary structures have been completely obliterated. Ultramafic rocks of the Érasme Formation are whitish to greenish-white in altered surface, and dark-green to blackish grey in fresh exposure. The rock is soft, foliated, very magnetic, homogeneous and fine to medium-grained. It consists of an assemblage of tremolite, talc and serpentine. It also contains carbonates, commonly associated with talc, and magnetite. Ultramafic sills are an important geological marker within the Mine Series Package as they are commonly located in the gold mineralization structural wall of  Eastmain Mine Zones A, B and C (Frappier-Rivard 2015).

The Érasme Formation is present only in the southern branch of the Upper Eastmain Greenstone Belt. For the moment, the lithological and geochronological information does not allow to extend this formation to other branches of the Upper Eastmain Greenstone Belt. The Érasme Formation has a true thickness ranging from 1 to 2 km and is continuous for 25 km. The northern end of this stratigraphic unit is masked and intruded by the Bohier Island Pluton. To the south, the Érasme Formation is disappearing at the discordance that borders the Otish Basin.

The dated sample is from a trench stripped in 2016 by Eastmain Resources (outcrop 17-JM-6010). The trench name is EM16-H2 and it corresponds to the Hillhouse gold deposit. The stripping is located in the southern branch of the Upper Eastmain Greenstone Belt, a few kilometres northwest of the Eastmain Mine. The Hillhouse deposit includes a mineralized zone. It is a recrystallized siliceous and sulphide chert (pyrrhotite, pyrite, chalcopyrite, sphalerite) that is placed in contact with a transitional pillow basalt and an intermediate to felsic fragmentary sequence. The lithology sampled for dating is an ash and lapilli felsic tuff located in the structural wall (stratigraphic top) of the mineralized zone. The fragments are mostly felsic, few mafic (gabbroic and/or basaltic). In felsic fragments, up to 3% of quartz phenocrystals are visible. The age of the felsic tuff of the Érasme Formation yielded an age of 2800 ±6 Ma, that is, Mesoarchean.

The Érasme Formation is part of the René Group. It corresponds to the first volcanic event of the Upper Eastmain Greenstone Belt. The Érasme Formation is older than the Roman Formation (2770 ±3 Ma, Davis and Sutcliffe, 2018b; 2770 ±6 Ma, Davis and Sutcliffe, 2018a), Clément Formation (<2770 Ma) and Dolent Formation (2751 ±5 Ma; Davis, personal communication, 2019). Contact between the Érasme and Roman formations was not observed in the field. A pause in volcanism or a fault could explain the difference of 30 Ma between the emplacement of the Érasme and Roman formations.

Finally, small intrusions in the form of sills or dykes cut volcanic rocks of the Érasme Formation. These intrusions are represented by felsic and intermediate porphyric rocks, aphanitic felsic dykes, and felsic dykes with quartz eyes and plagioclase phenocrystals.