The volcanic and volcaniclastic rocks of the Upper Eastmain Greenstone Belt (UEGB) were described in the works of Hocq (1985), Roy (1985, 1988), Couture (1986, 1987a, 1987b, 1987c, 1993) and Couture and Guha (1990). At that time, the authors grouped all of these rocks within the René Group, since no formation was individualized. Following mapping and geochronology work in the Bohier Island and Cadieux Lake areas, Beauchamp et al. (2018) and Beauchamp (2019) divided the René Group into four formations, including the Clément Formation, which corresponds to rocks of the UEGB third volcanic event. The name comes from Clément Lake in the region.

The Clément Formation consists mostly of amphibolitized basalts and andesites, frequently pillowed (nAcln1). Thin horizons of intermediate to felsic tuf (ncln2) and gabbro intrusions (nAcln3) outcrop locally, interbedded in the volcanic pile. At the top of the Clément Formation, two magnetic horizons of iron formations associated with garnet amphibolite horizons (nAcln5) and many ultramafic sills (nAcln4) that could potentially be flows were plotted using the aeromagnetic map. 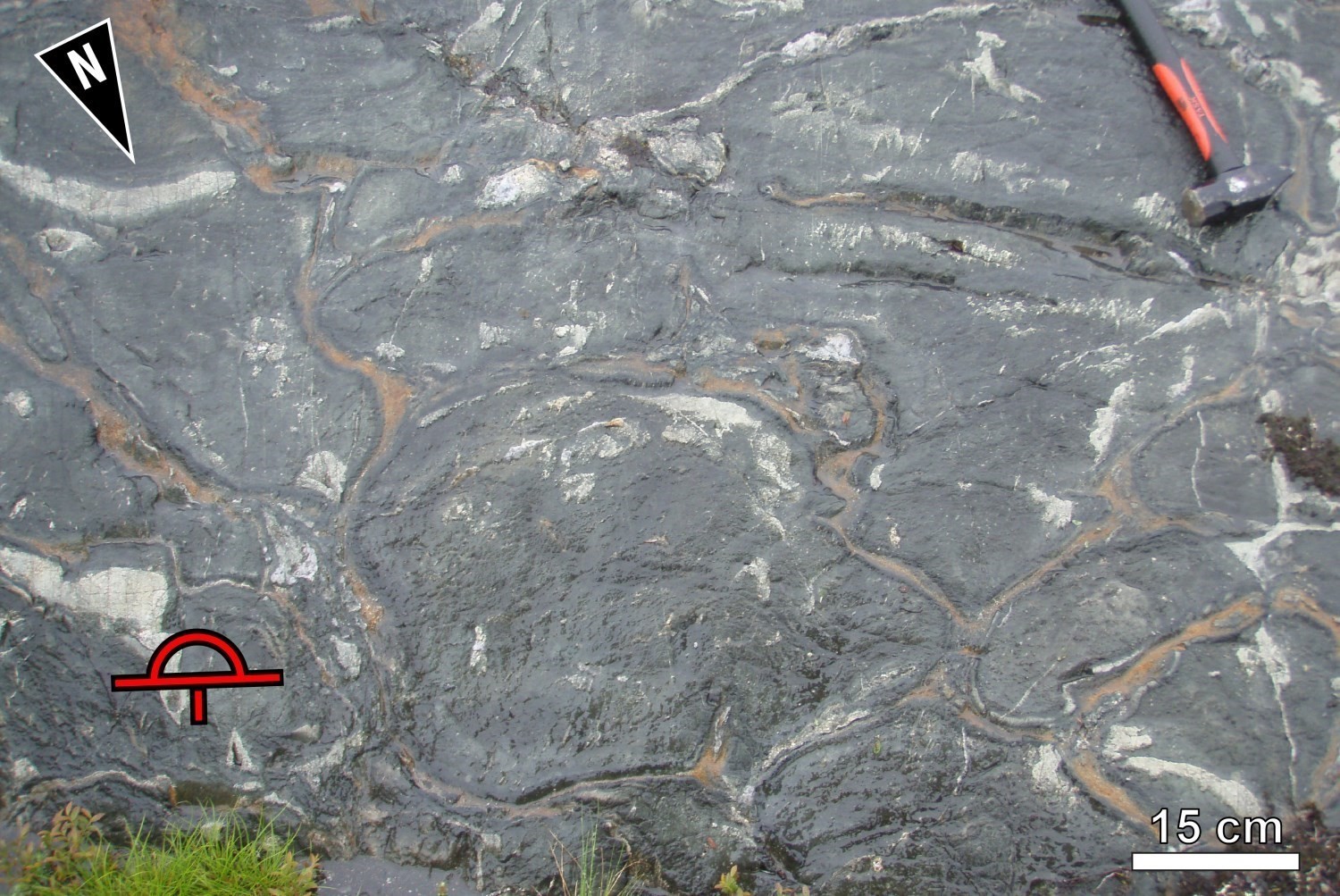 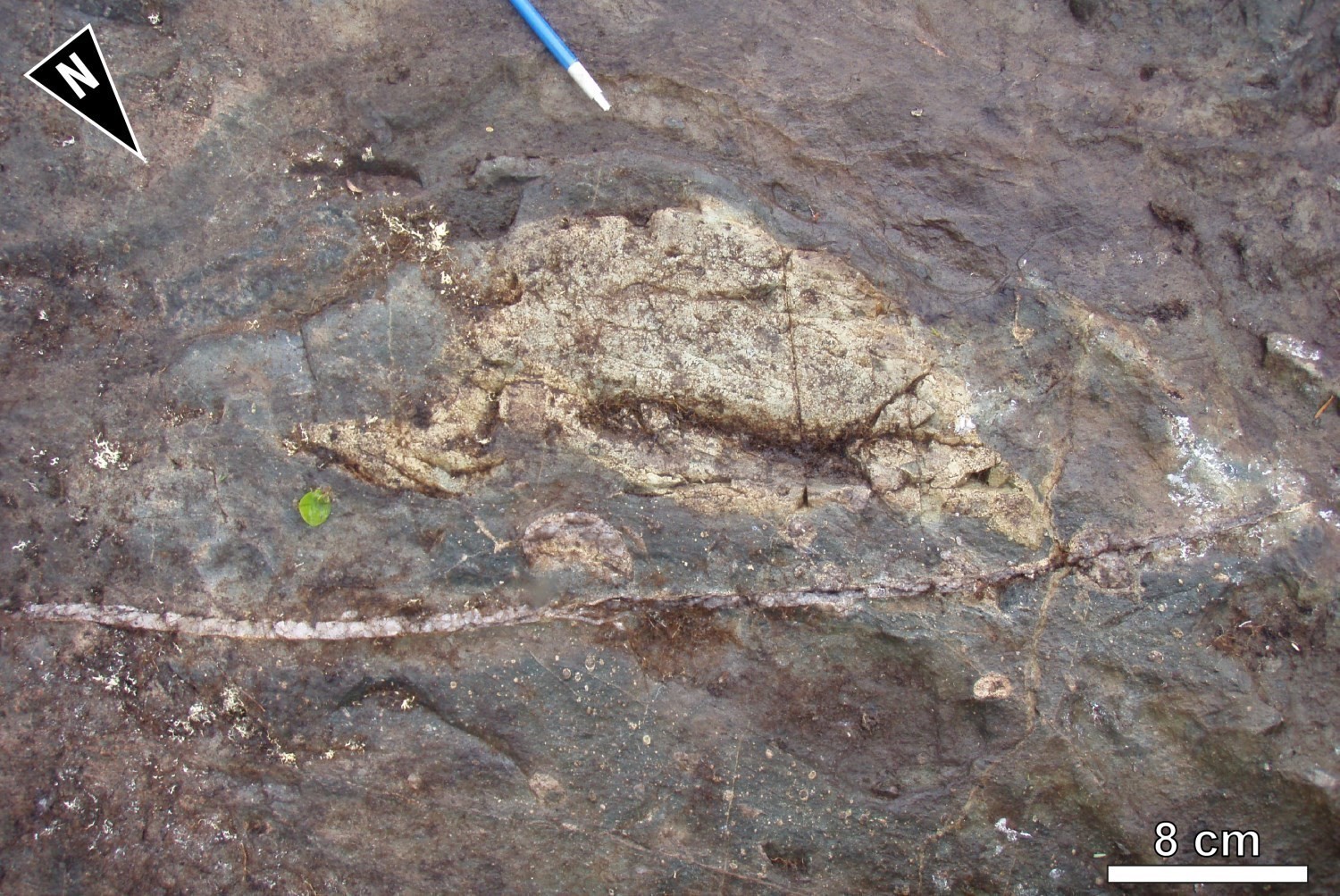 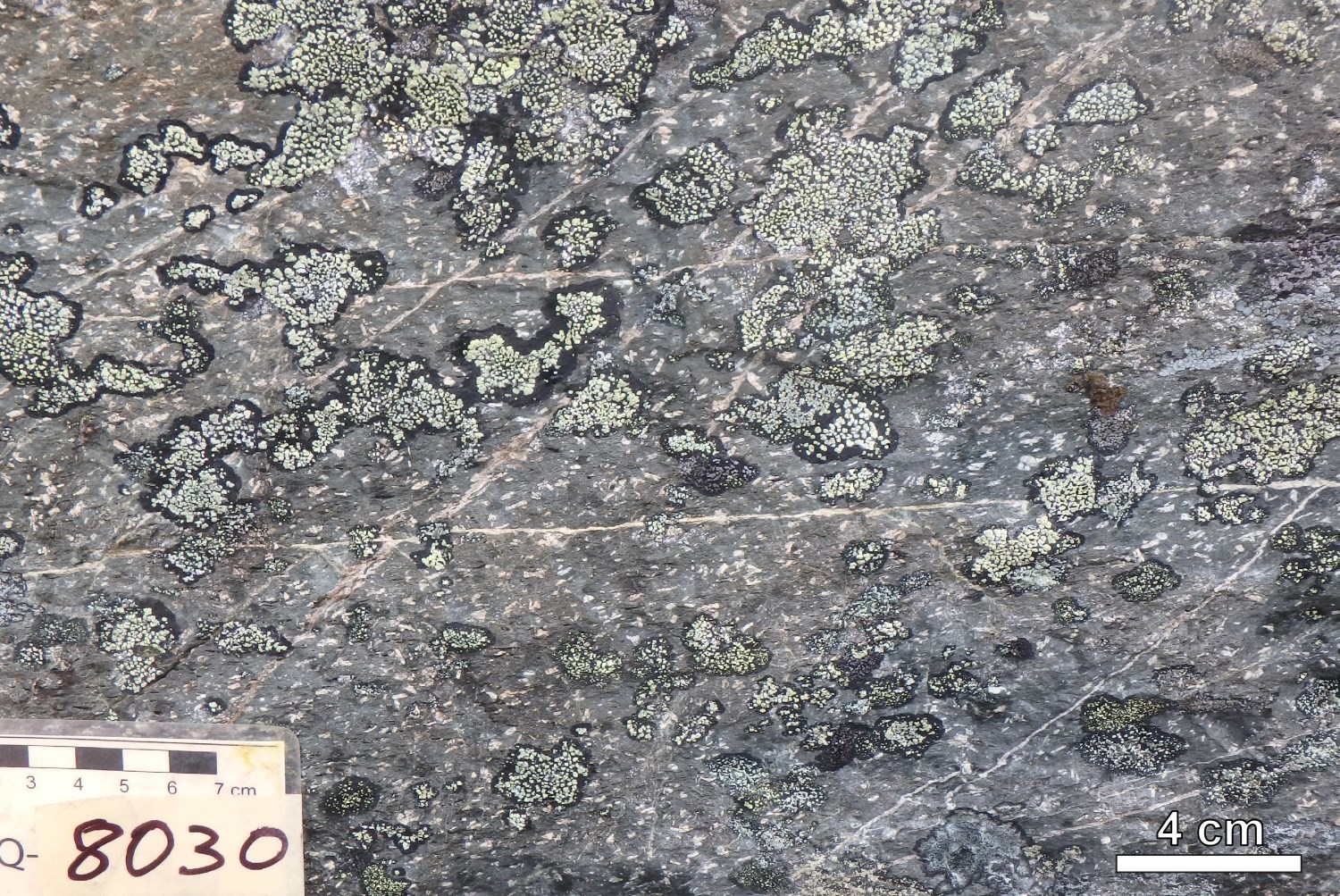 Unit nAcln1 consists mostly of basaltic and andesitic submarine mafic lava outcrops. Basalts are pillowed or as massive flows. The best preserved pillows, located to the south and east of Gaël Lake, all indicate reverse polarities oriented towards the SSW and the S. Pillow edges are defined by strong biotitization, sometimes accompanied by garnet. Other volcanic facies are also visible, such as amygdaloidal, pillowed with saussuritized core, porphyritic or flow breccia. Amygdules, when present, are subrounded and stretched. They are filled with quartz, calcite, plagioclase and epidote. Basalts of the Clément Formation have a paragenesis that includes 50-70% green amphiboles (hornblende, actinolite) sometimes porphyroblastic and poecilitic, moderately to highly damouritized plagioclase, epidote (clinozoisite, zoisite, pistacite), 0-5 % sphene and 0-3 % garnet porphyroblasts. Minor amounts of chlorite, quartz, calcite, sericite, muscovite, rutile, magnetite, ilmenite and opaque minerals were also observed. Some magnetic basalts contain actinolite and tremolite instead of hornblende. Basalts at the east end of the southern branch of the Upper Eastmain Greenstone Belt appear to be less metamorphosed (greenschist facies). They contain chlorite, actinolite, calcite, and very little hornblende. Alteration bands of light green to beige colour, composed of albite, quartz, epidote and calcite, form more or less diffuse bands that cross the basalt. Several veins and veinlets with various compositions (epidote ± calcite ± quartz ± albite ± hematite) cut basalt.

In the vicinity of the discordance with the Otish Basin, outcrops of mafic rocks are magnetic and heavily altered. Radioactive hydrothermal alteration zones give the rock a brownish to yellowish colour. Barite-fluorite-silica-specularite veins with uraniferous minerals cut mafic volcanics.

Mafic rocks of the nAcln1 branch have andesitic basalt, subalkaline basalt and andesite compositions. Some basalts, which contain 10 to 14% MgO, are magnesian. Magnesian basalts are located near ultramafic sills at the top of the stratigraphy of the Clément Formation. Basalts and andesites of the Clément Formation contain 43-56 % SiO2, 4-14 % MgO, 0.4-1.2 % TiO2 and 17-95 ppm Zr. The majority of basalt analysis points are of tholeitic affinity while andesites are calc-alkaline. The Clément Formation basalts are characterized by relatively flat chondrite-normalized rare earth diagrams (mean La/Yb = 1.1; mean Gd/Yb = 1) and Zr/Y ratios between 1.4 and 4.7 with an average of 2.4. Andesites show diagrams that are more enriched with light rare earth elements than basalts. Magnesian basalts are depleted in light rare earth elements (mean La/Sm = 0.8). 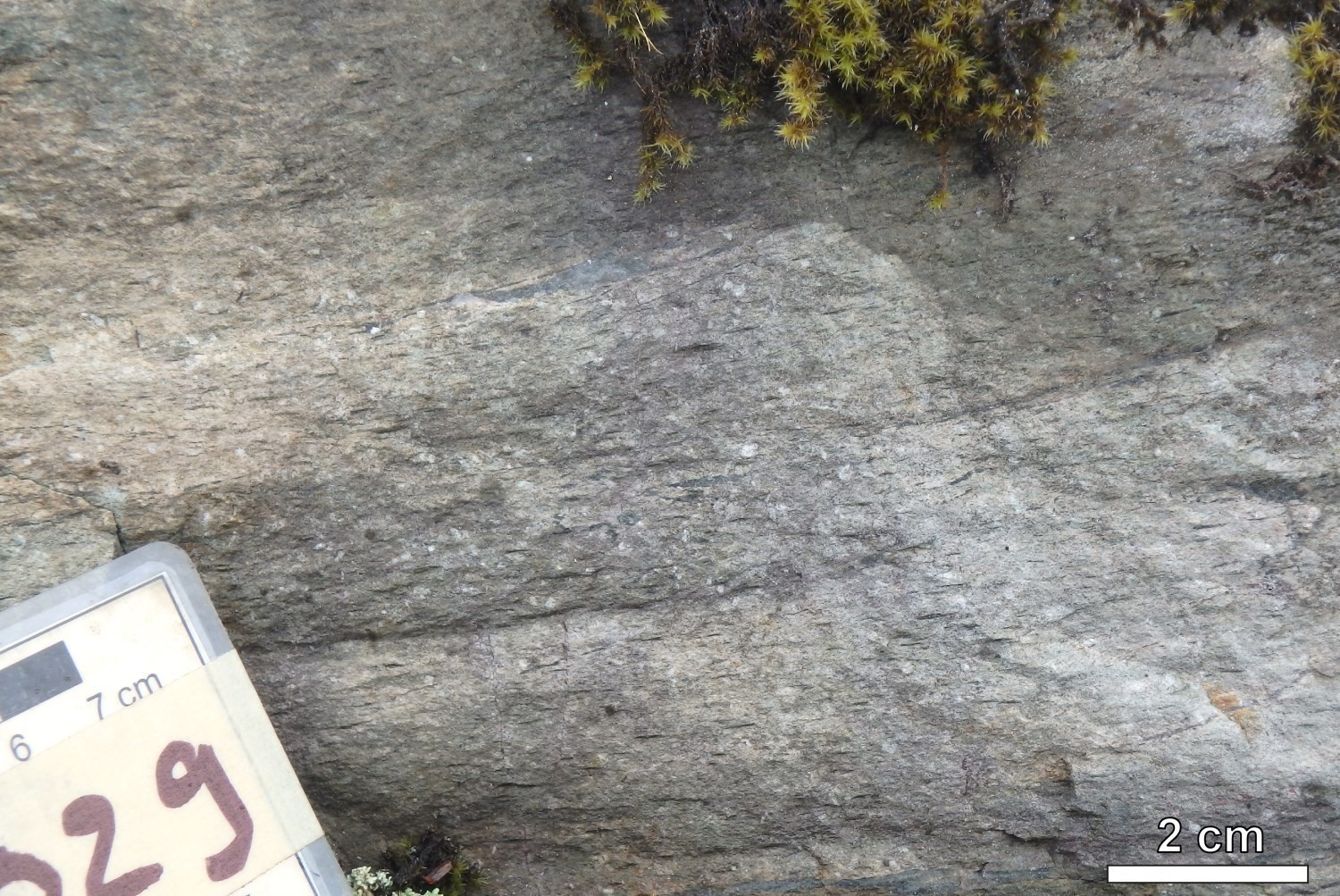 Unit nAcln2 is not very common in the Clément Formation. Tuffs and flows are beige in altered surfaces and light grey in fresh exposure. These rocks have felsic to intermediate compositions and are of calc-alkaline affinity. Tuffs contain mafic or felsic lapillis. They frequently contain 1-5 % quartz crystals, and weakly to moderately damouritised plagioclase phenocrystals. Felsic to intermediate volcaniclastic rocks contain quartz, feldspath, biotite, chlorite, white mica and epidote. Some contain amphiboles, garnet and sillimanite and pinitized cordierite porphyroblasts. Massive felsic flows with quartz eyes and plagioclase phenocrystals are also present. 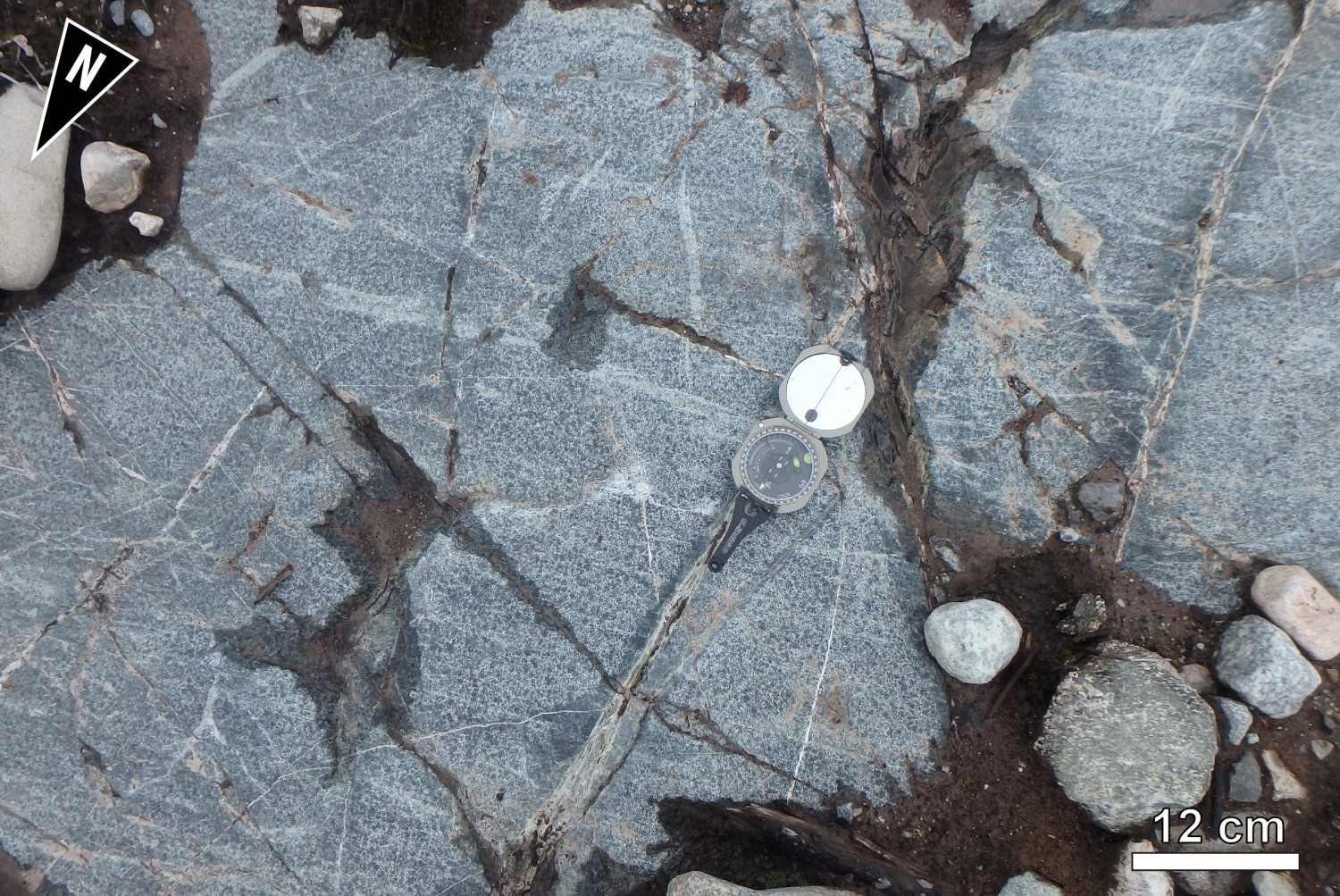 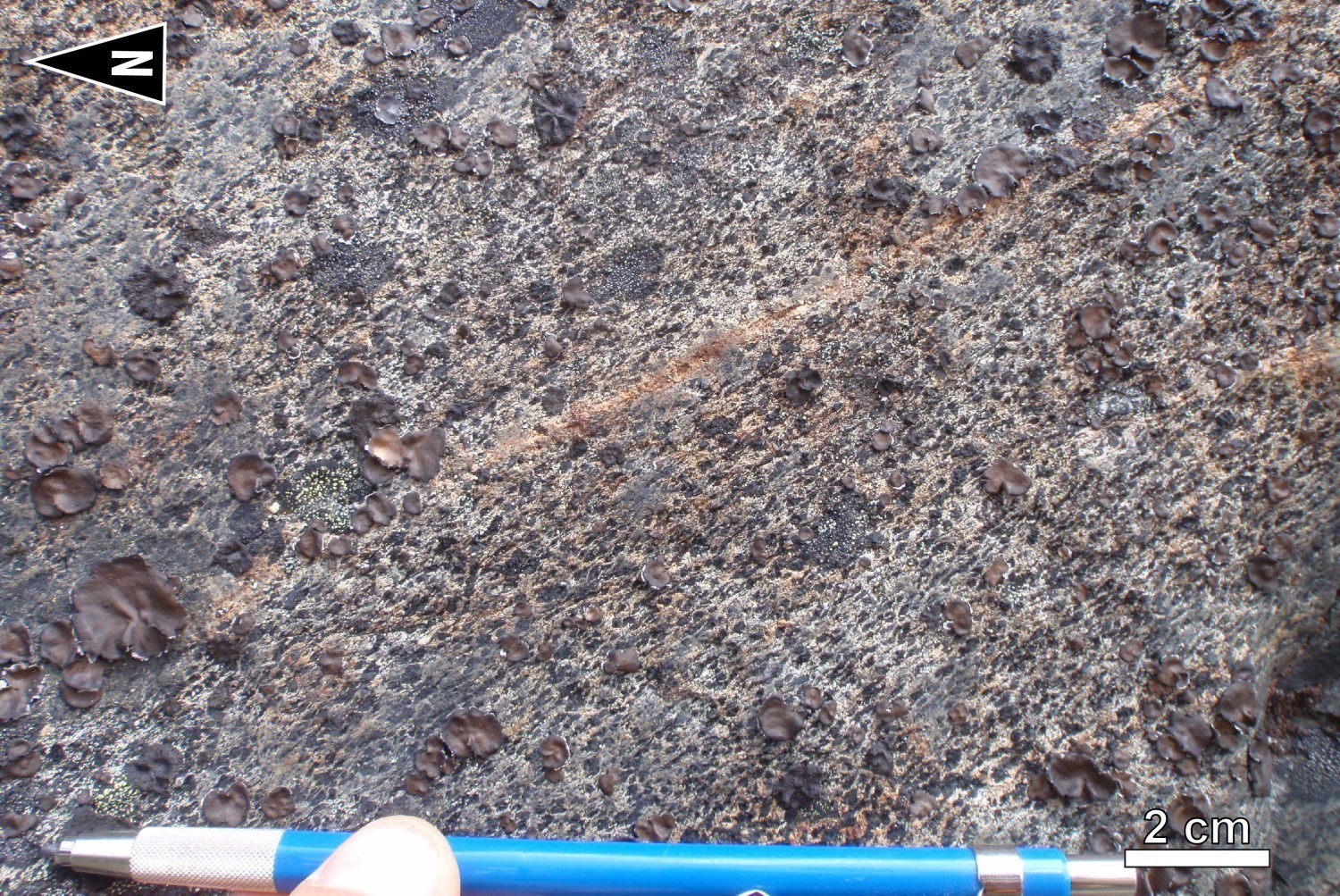 Gabbro is dark green in altered patina and slightly lighter in fresh exposure. It is mesocratic to melanoratic. Generally, this unit contains porphyroblastic amphiboles (0.3 to 1 cm tall) with pyroxene pseudomorphs and plagioclase. Sericite and epidote, which form clusters, moderately to strongly replace plagioclase. There are minor amounts of sphene, rutile and opaque minerals. It is a solid, weakly foliated rock that varies in size from medium to coarse-grained. Some quartz, albite, epidote and hematite veins are present. 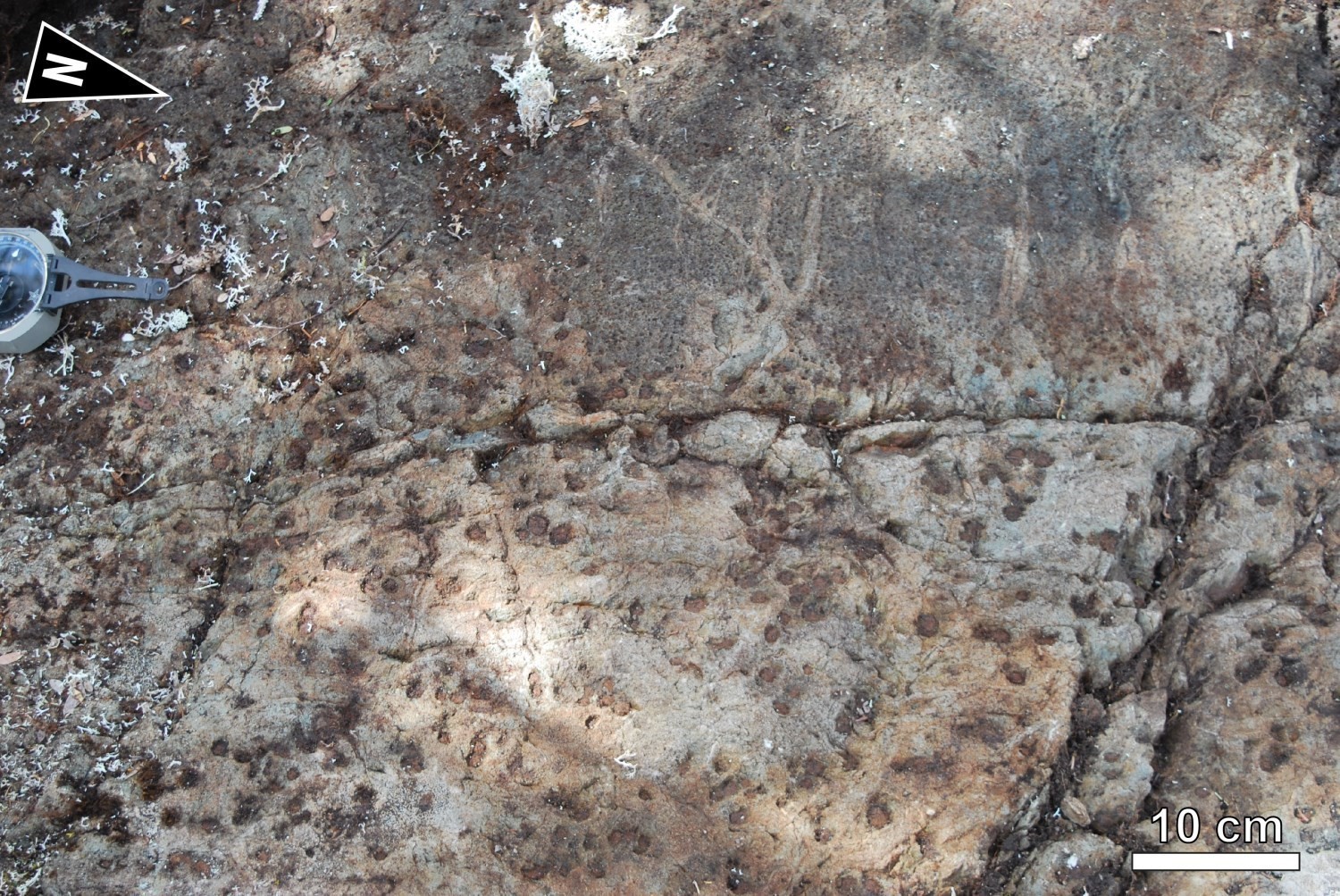 Roy (1988) had identified an ultramafic intrusion in the Clément Lake area over a distance of 10 km. The maximum thickness of this intrusion was 200 m. Over short distances, its composition changed from ultramafic (olivine cumulate) to mafic (hornblende gabbro).

As a result of the Ministère’s 2017 mapping campaign, several additional horizons of ultramafic sill or ultramafic volcanics were observed or interpreted using magnetic anomaly maps (Beauchamp and Massei, 2018). Ultramafic rocks of the Clément Formation form bands conformable with the belt stratigraphy and do not show volcanic structure in general. So this is ultramafic sills. However, some outcrops may consist of extrusive rocks. Outcrop 17-JM-6132 shows what could be contact between flows or cooling fractures. There are also very long lobes that close. Ultramafic intrusions have a brownish-to-greenish altered patina and are darker in fresh exposure. Tremolite, talc, magnetite and locally serpentinized olivine cumulates are the main minerals visible under the microscope. Magnetism is medium to strong and granulometry is fine apart from olivine phenocrystals that measure up to 1 cm in the cumulate-structure facies. In thin section, the rocks are made up of amphibole acicular crystals (mainly tremolite and actinolite, locally hornblende). Olivines, when present, are completely replaced by serpentine. The rock contains varying amounts of magnesian chlorite and minor amounts of talc, epidote, calcite, sericite and opaque minerals (including magnetite and sulphides). 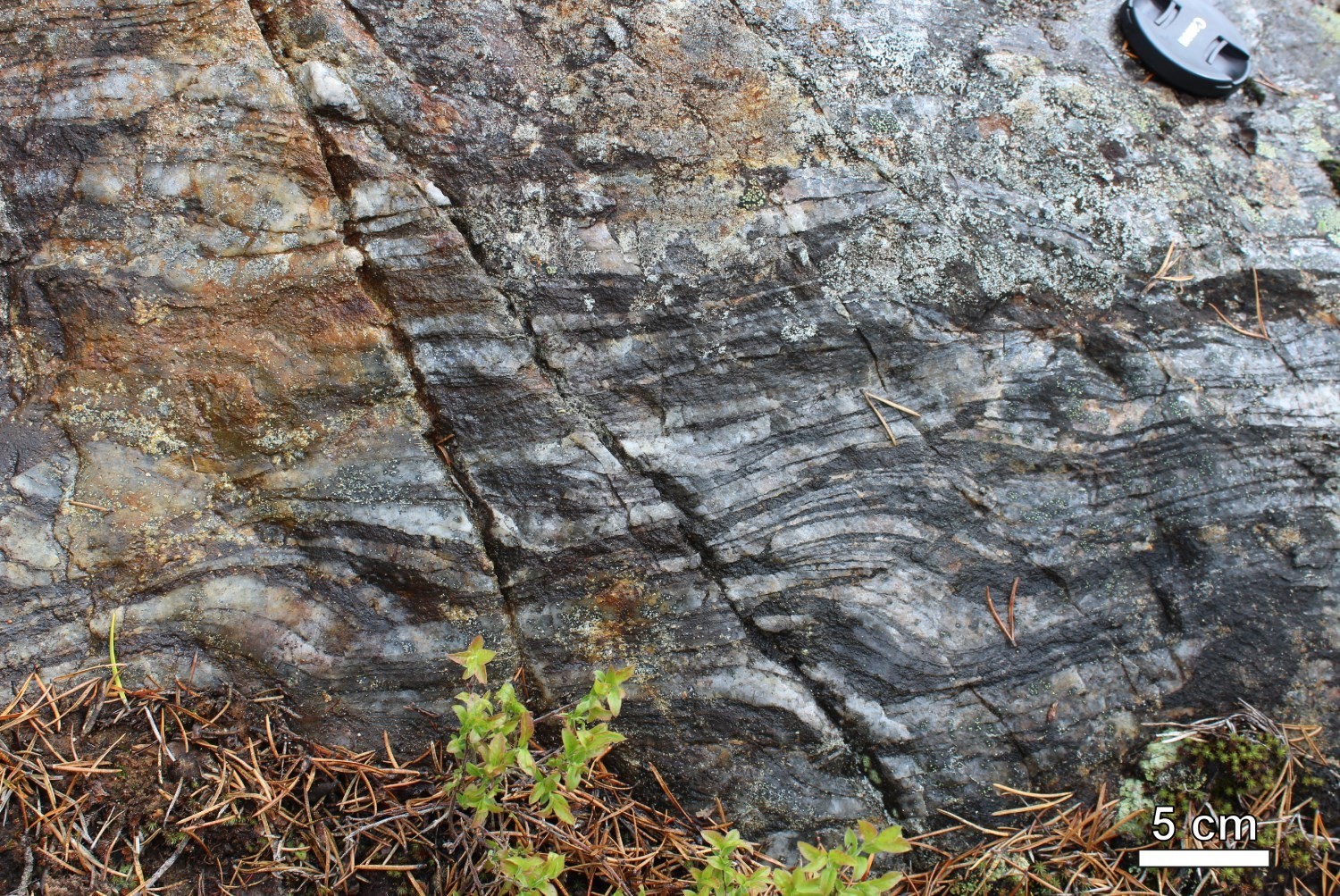 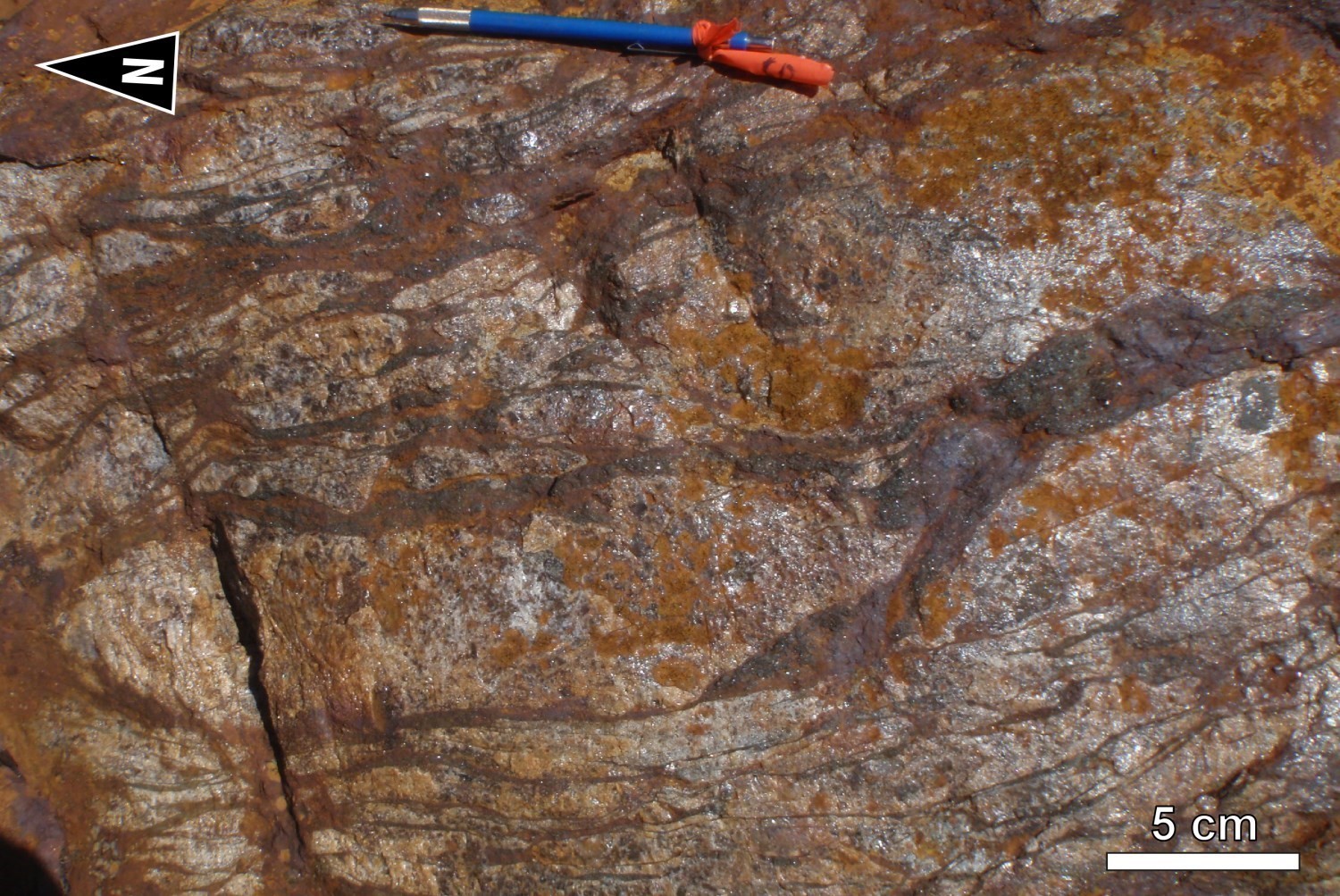 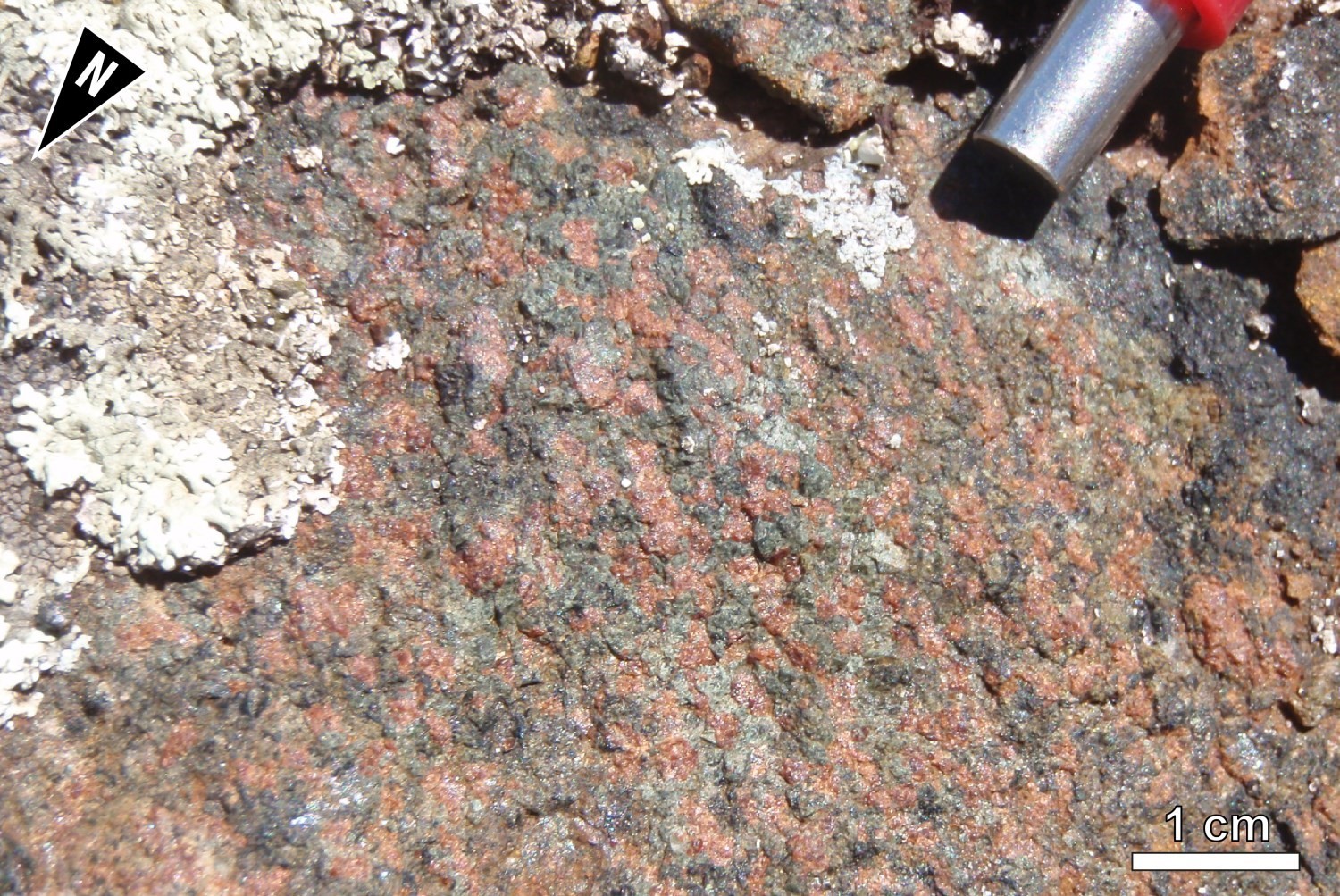 Iron formations within the Clément Formation represent a very small proportion of all rocks. Two main horizons were identified through “geofiche” and compilation outcrops. The iron formations are thin strips and their extension northward and southward is interpreted by magnetic continuities on the residual total magnetic field map. They have a rusted (gossan) altered patina. They contain 32-43 % SiO2, 28-40 % Fe2O3, 5-6 % MgO, 72-112 ppm Zr and a Zr/Y ratio of 4.5-6. They are enriched with light rare earth elements and have anomalies in Nb, Ta and Ti on the spider diagram.

Iron formation at the oxide facies has a banded structure. It consists of an alternation of quartzite-recrystallized white chert centimetric bands and dark grey oxide bands. Sulphide-rich bands contain 30-60 % pyrrhotite and pyrite. The minimum thickness of iron formation is 5 m.

Mixed iron formation shows both silicate and oxide facies. It is made up of quartzite-recrystallized chert bands, and amphibole-rich (hornblende and grunerite) bands containing some magnetite. Primary banding and primary foliation are parallel to subparallel. Quartzite bands are locally boudinaged, and locally a light foliation is visible in the amphibole-rich melanocratic bands. Disseminated pyrrhotite (trace to 5%) is present in amphibole-bearing bands. Laterally, chert bands become thicker (5 to 15 cm) and only thin lode of magnetite and amphibole are present.

Garnet amphibolite horizons, which could be in the continuity of silicate-facies iron formations (MgO between 3 and 5% and Fe2O3T between 11 and 11.5%) were identified on the same magnetic markers as banded iron formations. They are foliated but not banded. They have a dark greenish patina in altered surface and medium green in fresh exposure. They are medium-grained and have a nematoblastic structure. Their paragenesis consists mainly of 40-60% green amphiboles (hornblende, grunerite), 20-30% pyroxenes, 20-30% poecility porphyroblasts of subautomorph almandine garnet, 10-20% opaque minerals (oxides and sulphides) and 5-30% quartz, with minor and variable amounts of biotite, sericitized plagioclase, epidote, calcite and zircon. Garnets are flattened and retrograded to chlorite.