Couture (1987) identified a package of tonalitic rocks east of the Upper Eastmain Greenstone Belt (UEGB) and grouped these rocks in the central tonalitic complex, including the Île Bohier Granodiorite described by Roy (1988). As a result of geological mapping work conducted by the MERN in summer 2016, Talla Takam et al. (in preparation) have designated this as the Chiyaaskw Pluton.

The Chiyaaskw Pluton consists of a heterogeneous set of tonalite, quartz diorite and generally magnetic foliated diorite. These lithologies are commonly cut by micrometric to metric leucotonalite dykes with fine-grained biotite ± magnetite. On the total residual magnetic field map, the Chiyaaskw Pluton is characterized by a pronounced positive anomaly. Moderate to strong hematite and epidote alteration is characteristic of the unit, present in the form of late veinlets and rock replacement. The different phases of the pluton are also cut by quartz veins and several generations of centimetric to metric, straight-line or folded granitic dykes which are strongly hematitized and epidotized.

The chemical composition of the Chiyaaskw Pluton is relatively homogeneous. On the classification diagram of Debon and Lefort (1983), analyses are located in the tonalite, quartz diorite and diorite fields. Some samples are near the granodiorite limit. Tonalites (nAchw1) have SiO2 contents between 61 and 75% and are potassium poor (with an average of 1% K2O). The samples analyzed show profiles enriched with light rare earth elements compared to heavy rare earth elements, with very small positive or negative Eu anomalies. Spider diagrams are characterized by negative Nb, Ta and Ti anomalies with Zr and Hf enrichments. The samples plot to the boundary of metaluminous (type I) and peraluminous (type S) fields (Frost et al., 2001) and in the volcanic arc granitoid field (Pearce et al., 1984).

The Chiyaaskw Pluto was divided into two informal units: 1) a tonalite and biotite quartz diorite unit, with or without hornblende and magnetite (nAchw1), and 2) a diorite and hornblende quartz diorite unit, with or without biotite and magnetite (nAchw2). These units are cut by non-cartographic centimetric to metric biotite leucotonalite dykes, which are foliated and contain biotite that is or is not associated with magnetite or chlorite. Foliation is marked by biotite alignment. 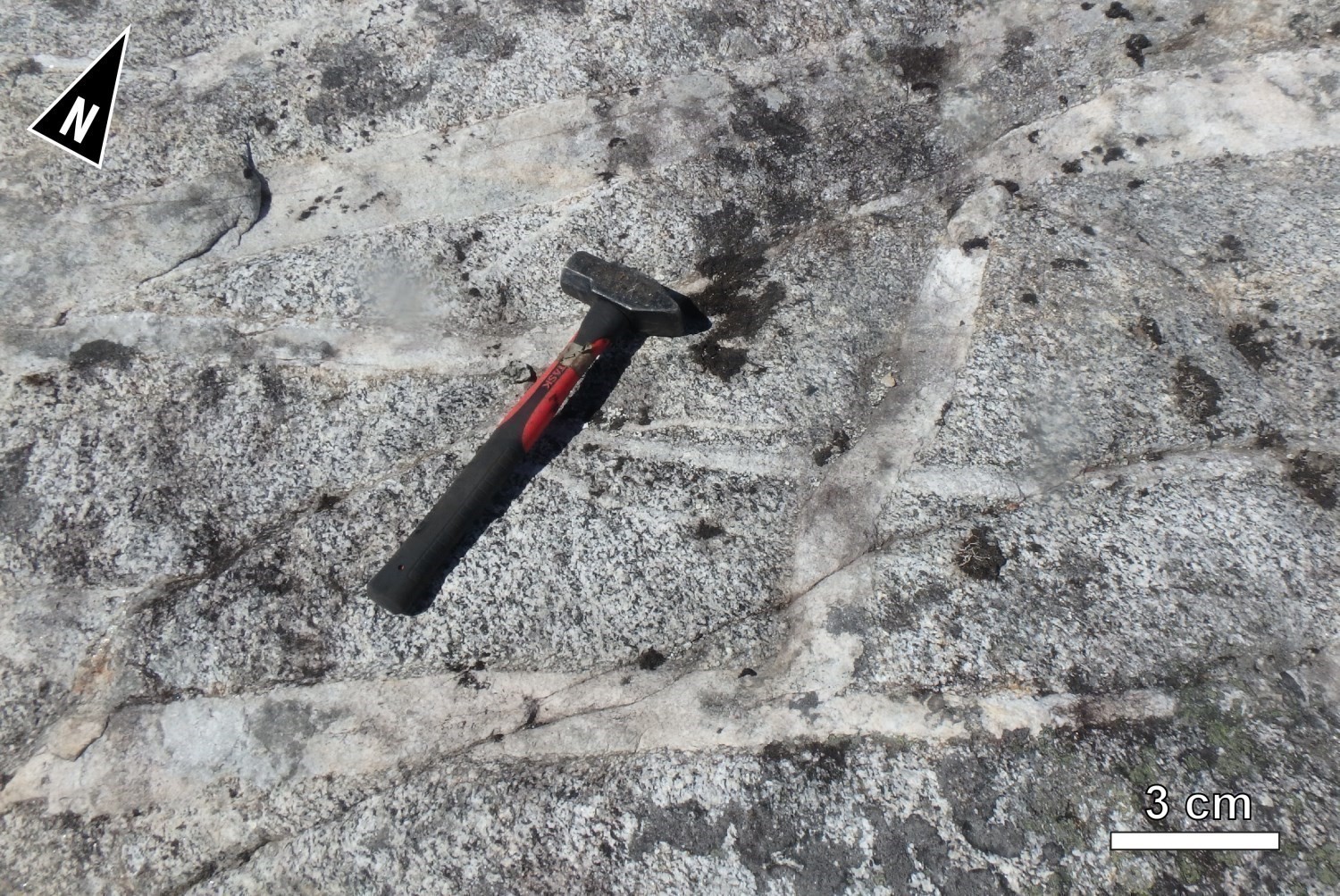 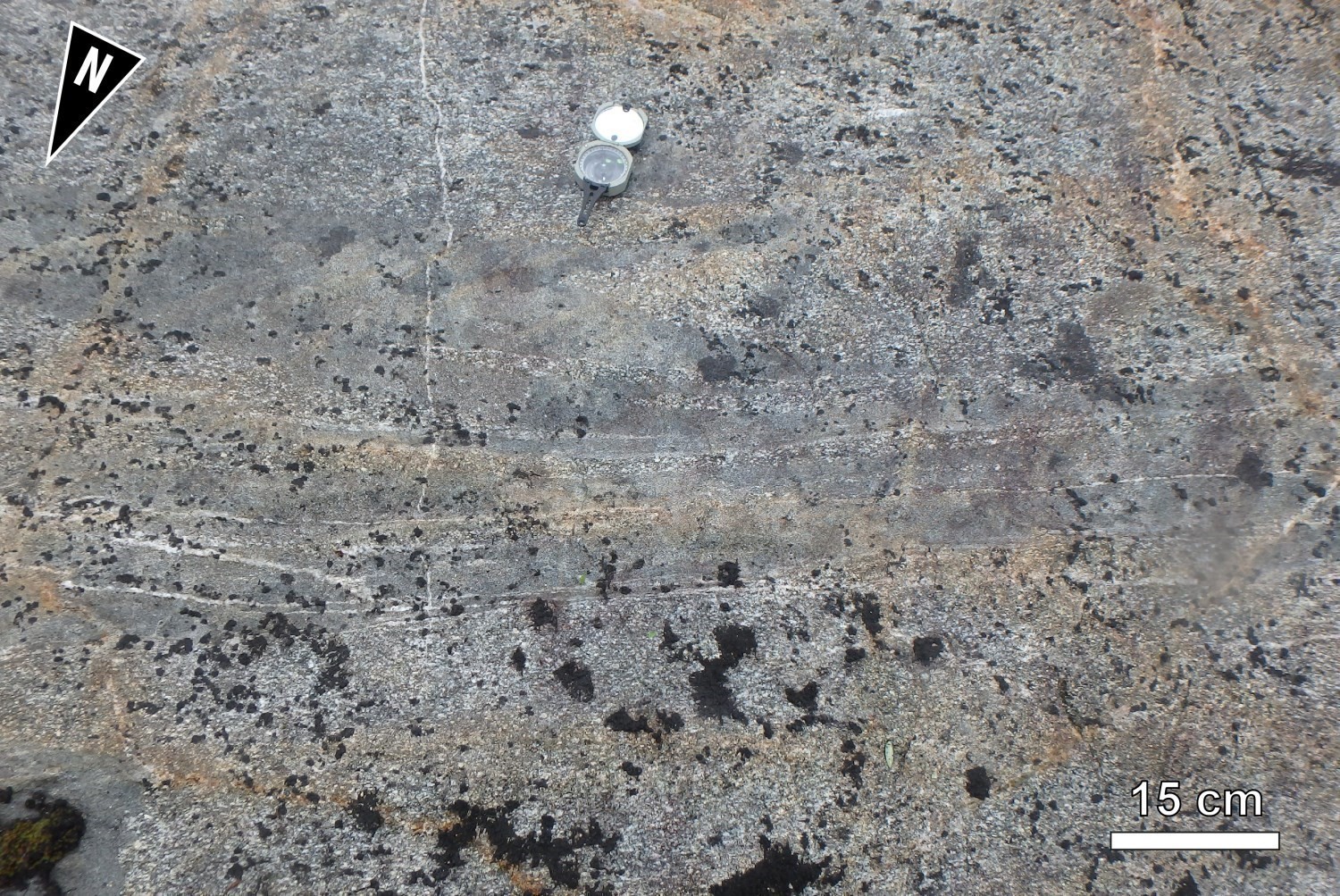 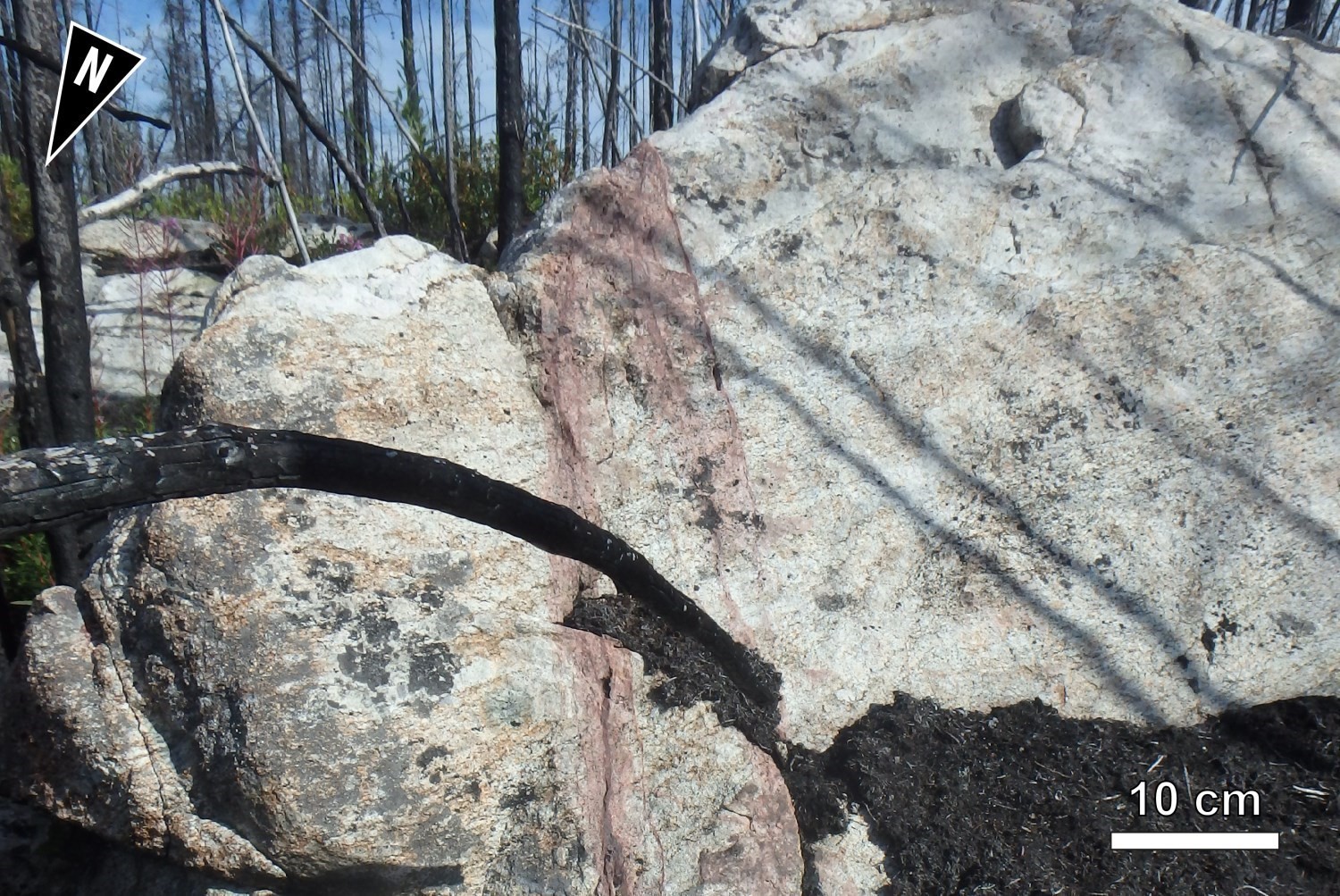 Unit nAchw1 is the largest unit of the pluton. It is composed of tonalite and quartz diorite, medium-grained, foliated, which exhibit a white and black patina. This unit shows locally banded and gneissic structures. The mafic minerals present in these rocks are, in order of importance, chloritized biotite and green hornblende (very common) associated or not associated with epidote, sphene and magnetite. Plagioclase is twinned, hypidiomorphic, and weakly to strongly damouritized or saussuritized. In the case of severe alteration, plagioclase is completely pseudomorphosed by sericite and epidote. When alteration is less developed, sericite is concentrated on the edges of the crystals and along twins. Sericite forms small xenomorph flakes that line grain surfaces, while epidote defines clusters of coarser-grained subhedral crystals. Biotite, which is highly chloritized, aligns with the main foliation. Some nAchw1 tonalite outcrops exhibit a porphyraceous structure associated with plagioclase phenocrystals 0.1-2 cm in length representing 10 to 20% of the rock. Anhedral quartz, which is resorbed and has irregular edges, has an undulating extinction. Sphene crystals (less than 5%) are visible to the naked eye in places. They are mainly associated with mafic minerals (hornblende and biotite) and form rims around opaque minerals. Late epidote, chlorite and hematite veins cut the foliation of the nAchw1 tonalites. There are dioritic unit xenoliths (nAchw2) in the tonalite (nAchw1) and unit Achw1 dykes cutting rocks of the nAchw2 unit. 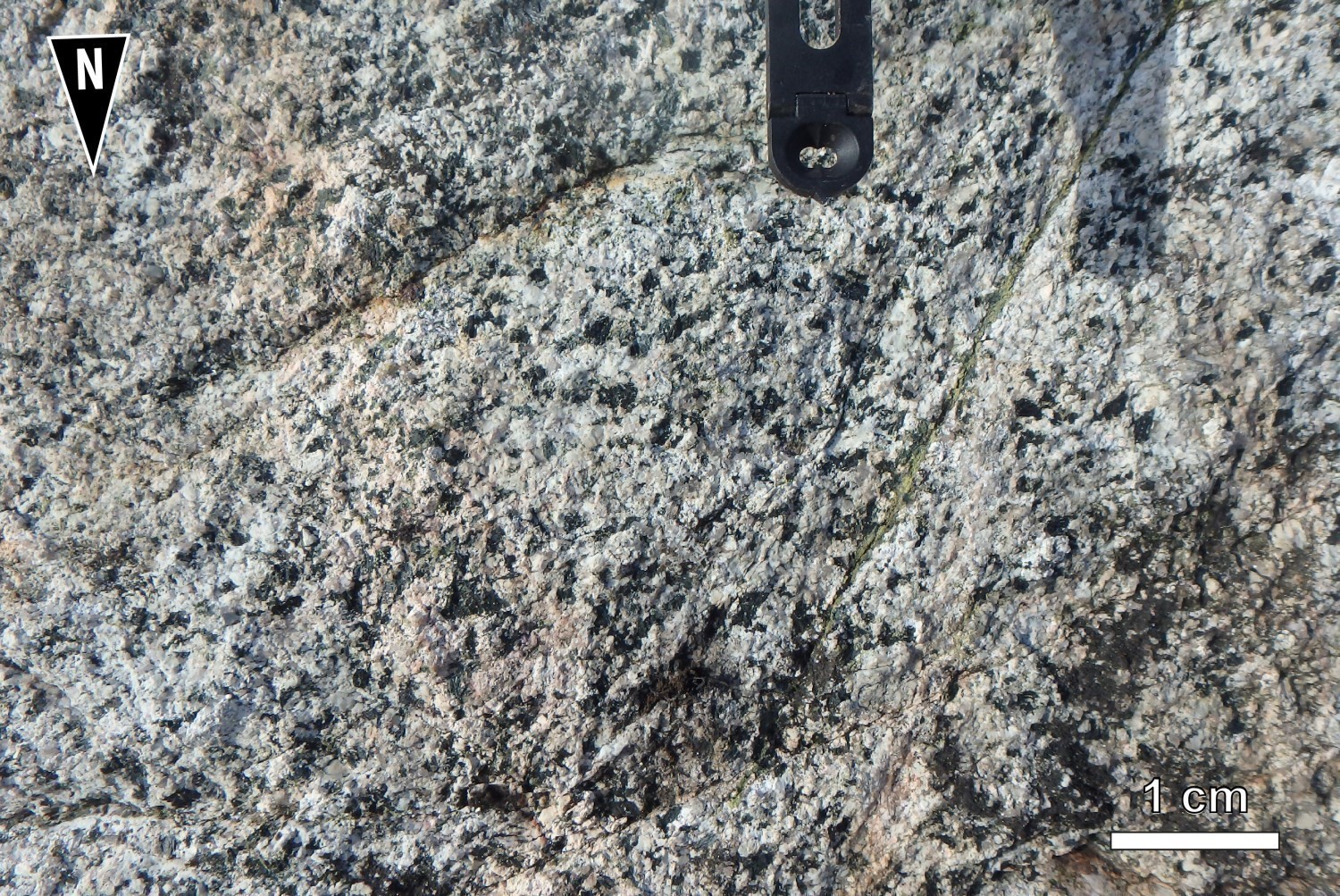 Unit nAchw2 consits of medium and fine-grained diorite and quartz diorite, characterized by a dark green patina with low pink shade to hematitisation. Rocks are composed of 30-60% green hornblende, 30-40% saussuritized plagioclase, up to 20% quartz, magnetite, and locally chloritized biotite and sphene. They contain less epidote, chlorite, leucoxene, hematite, sulphides (mainly pyrite), apatite and zircon. Unit nAchw2 is foliated and has a granolepidoblastic structure. Hornblend is poikilitic and contains rounded inclusions of quartz and plagioclase. Sphene grains are more abundant and coarser than in the nAchw1 unit. Leucoxene is found in mafic mineral clusters and is rimmed around opaque minerals.

The Chiyaaskw Pluton was mapped in 2016 in NTS sheets 23D11 and 23D12 (Talla Takam et al., in preparation) and in 2017 in sheets 23D05 and 33A08 (Beauchamp and Massei, 2018). It is located in the axial part of the Île Bohier Anticlinal and is bordered by the René Group metavolcanic rocks. The pluton is over 50 km long (ENE-WSW) and over 30 km wide. Additional mapping is required to fully understand its east and south extension. The dioritic phases (unit nAchw2) are mainly associated with fault zones, while the central part is mainly tonalitic (nAchw1). 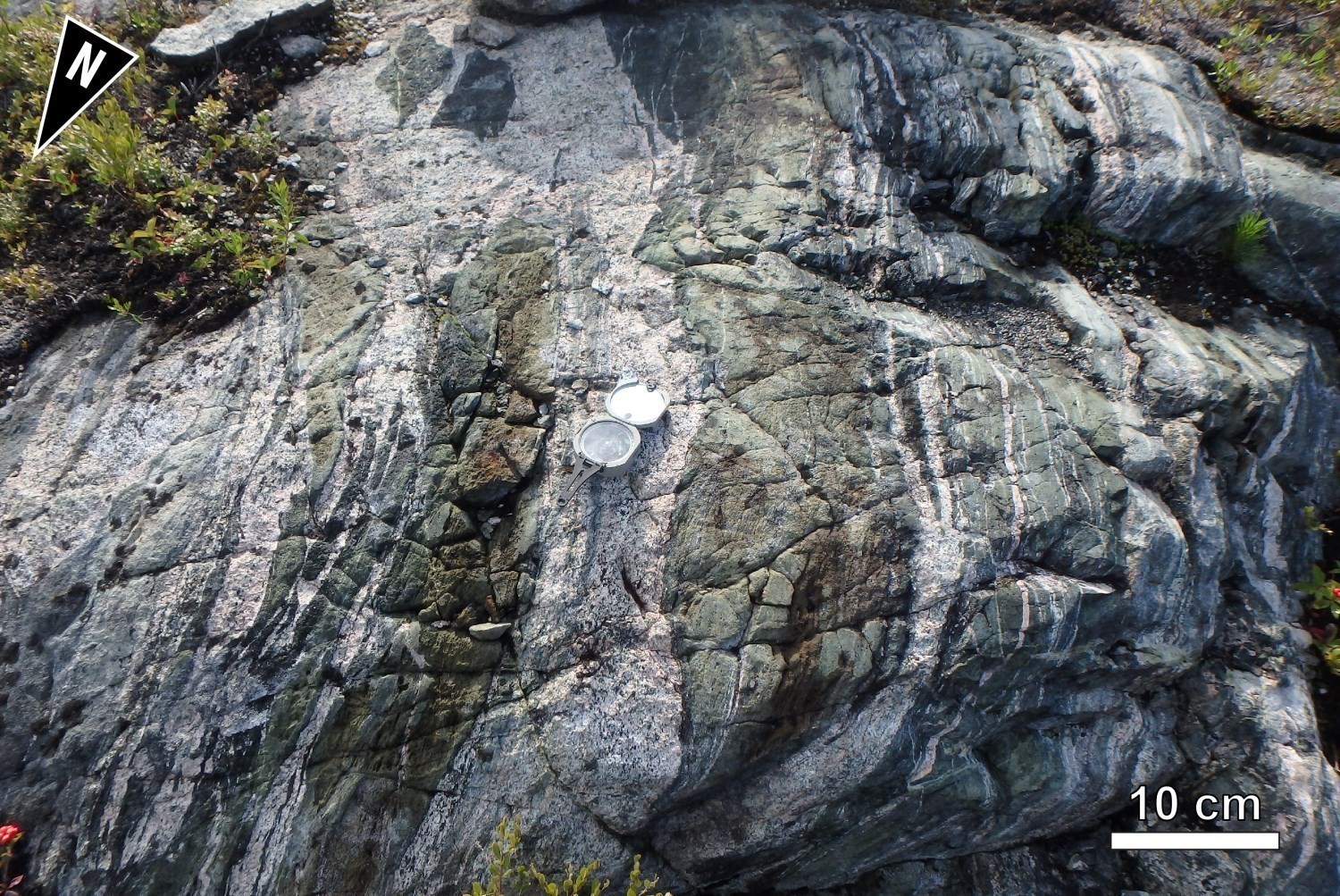 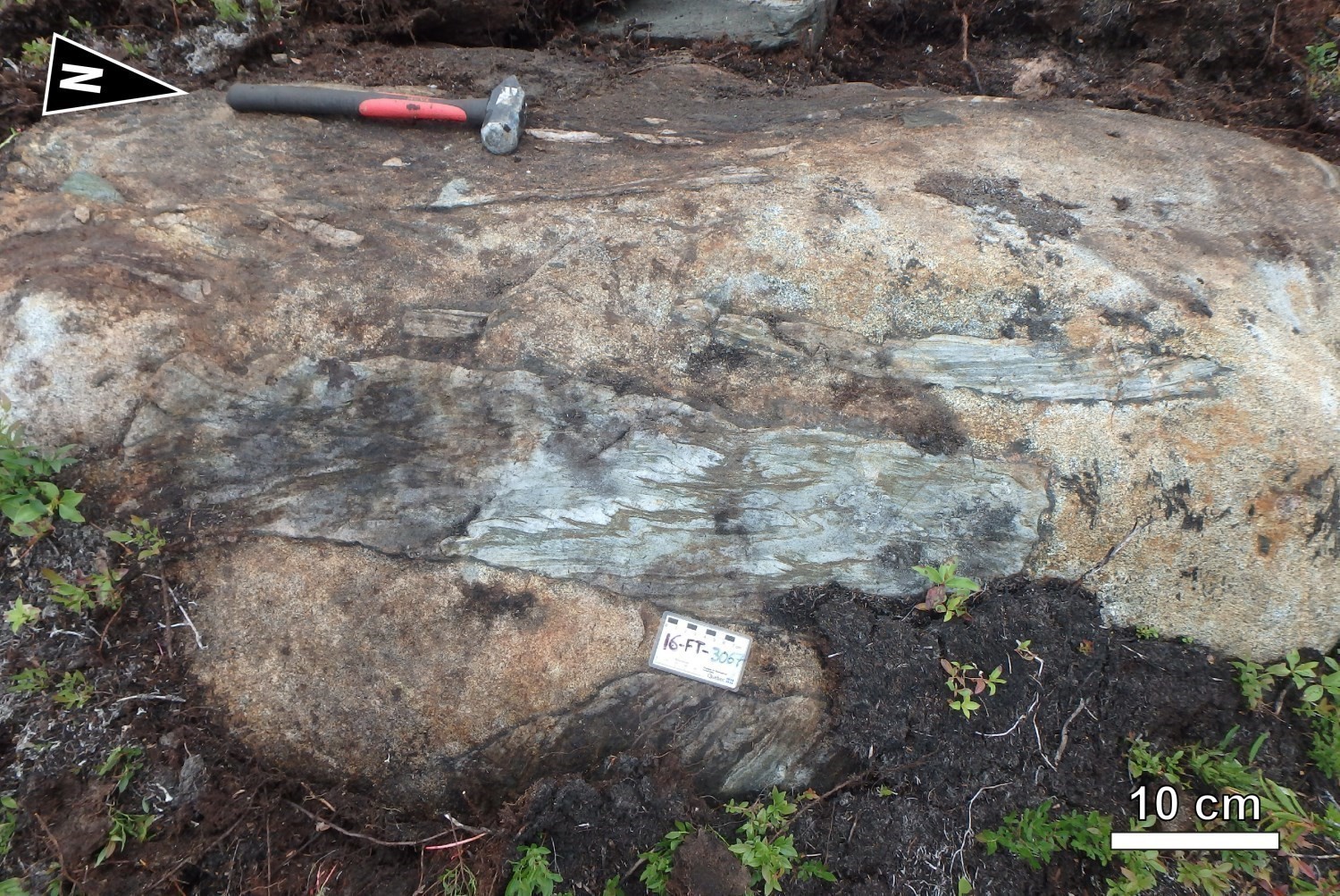 All intrusive phases of the Chiyaaskw Pluton are foliated to varying degrees. Foliation ranges from weak to strong and is marked by a preferential orientation of hornblende and biotite crystals. Crosscutting relationships indicate that some phases were emplaced earlier during regional deformation, while others, less foliated, intruded later. For example, the pluton was emplaced as a result of several magmatic pulsations of similar composition, ranging from dioritic to tonalitic. The Chiyaaskw Pluton therefore represents a syntectonic polyphased pluton. Xenoliths of the dioritic unit (nAchw2) in the tonalite (nAchw1), as well as dykes from the nAchw1 unit cutting rocks from the nAchw2 unit, were noted. Unit nAchw2 diorite and quartz diorite would therefore be the first intrusive phase. Subsequently, unit nAchw1 tonalite would have intruded, followed by the leucotonality dykes. The nAchw1 and nAchw2 units are cut by centimetric-to-metric intrusions of fine-grained and light-grey leucotonalite. Mutual crosscutting relationships between leucotonalite dykes demonstrate polyphased emplacement (outcrop 16-MP-2046).