The Île Bohier Pluton was introduced by Beauchamp et al. (2018). The first 1:50 000 scale mapping in the region, conducted by Hocq (1976) and then improved in a regional synthesis (Hocq, 1985), identified an assemblage of “light diorite and biotite hornblende leucotonalite to the east” of Bohier Island. The outline of this unit was quite imprecise. In 1987, Couture refined mapping of the area and placed a central tonalitic complex east of NTS sheet 33A08. This complex includes the current Île Bohier and Chiyaaskw plutons. In 1988, the central tonalitic complex was renamed the Île Bohier Granodiorite by Roy. Following the summer 2017 mapping work, Beauchamp et al. introduced the Île Bohier Pluton, a unit that is distinct from the large Chiyaaskw Pluton to the east. 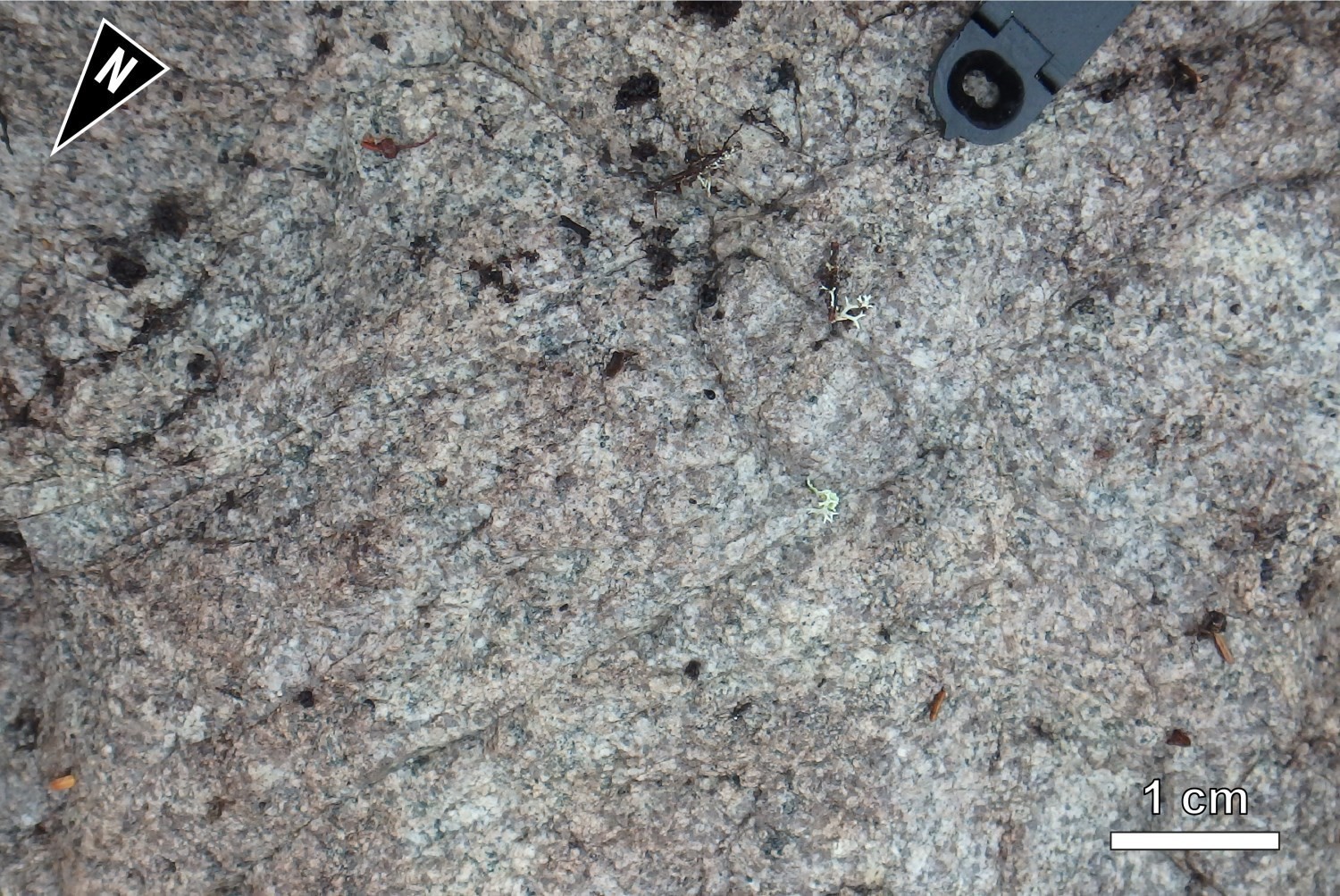 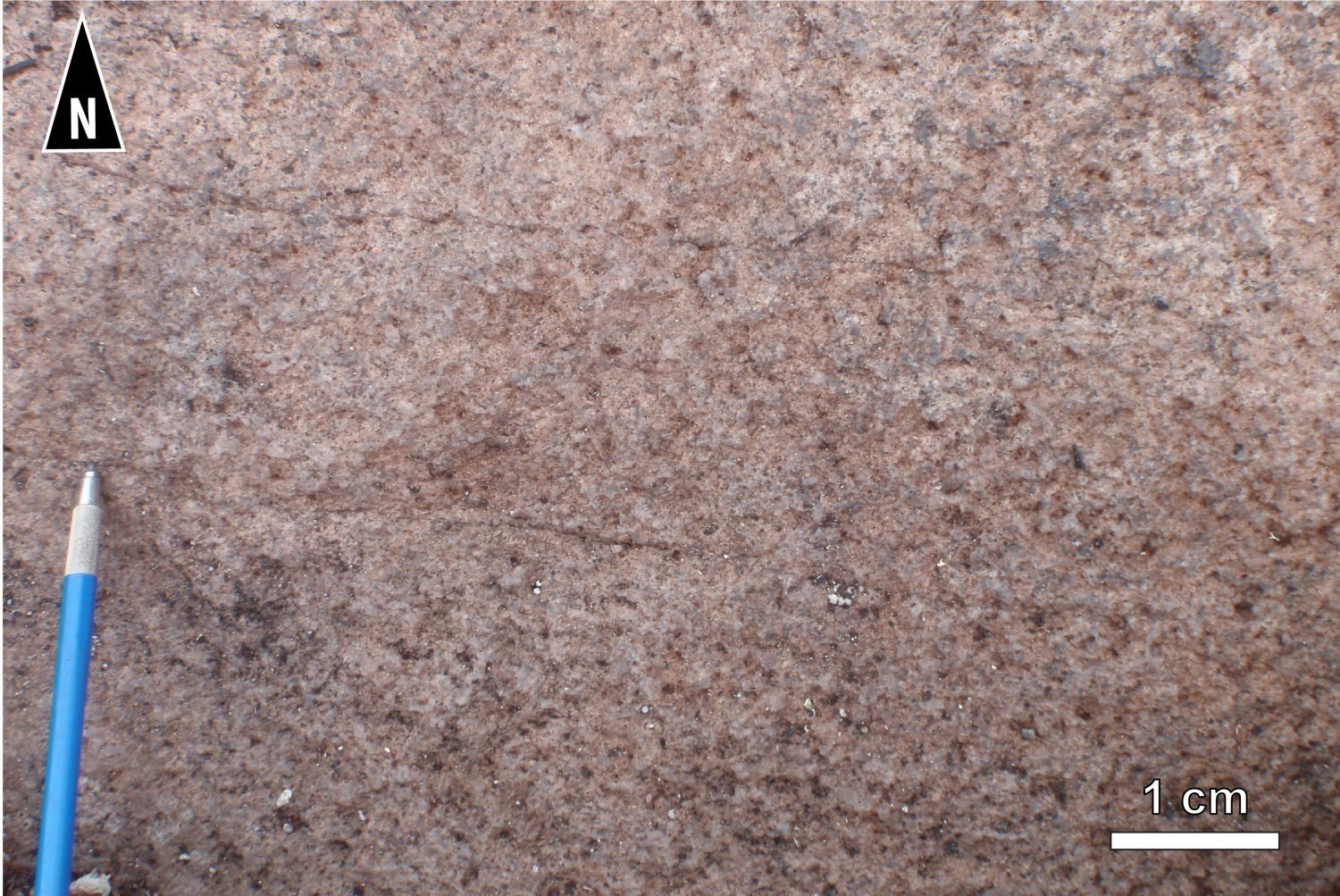 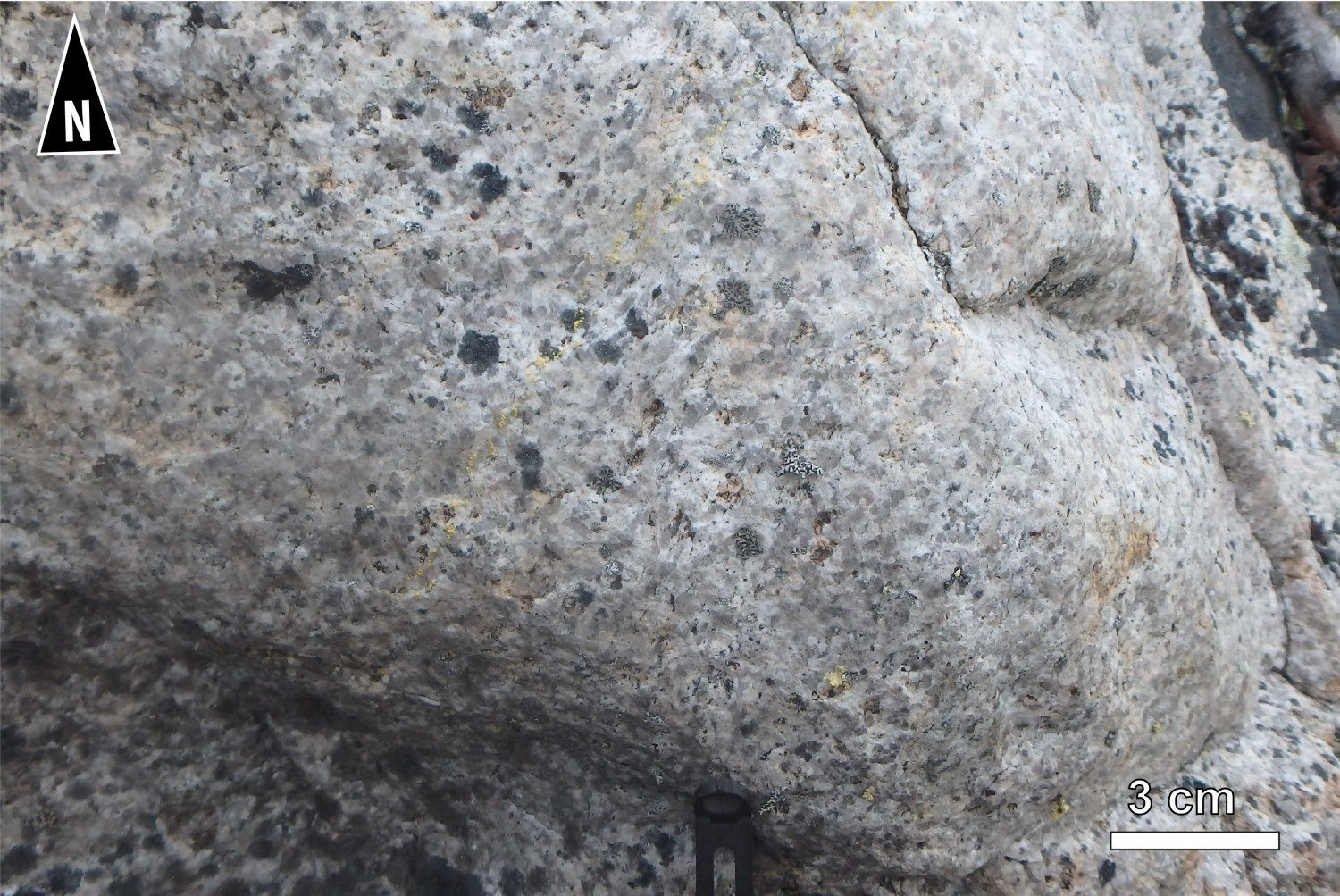 The Île Bohier Pluton is a homogenous, medium-grained, equigranular tonalite appearing slightly deformed. This intrusion is more competent than adjacent volcanic rocks and is located in the hinge of a regional fold (Île Bohier Anticlinal). This seems to have shielded it from the main deformation. Rocks of the Chiyaaskw Pluton, directly to the east, show a much more marked deformation. Locally, the composition of the Île Bohier Pluton can become more granodioritic. In altered surface, the rock is light grey-white with a greenish shade locally. In fresh exposure, it is white-grey to slightly darker pink grey. Although deformation appears weak, aeromagnetic maps indicate that this unit follows the shape of the Upper Eastmain Greenstone Belt (UEGB), just to the west. The total residual magnetic gradient map shows lineaments overprinting in the field magmatic banding and S1 foliation, which range in orientation from NNW-SSE to N-S to NNE-SSW. S1 foliation is marked by a preferential alignment of quartz crystals and mafic minerals. Mafic minerals usually appear in small clusters, giving the rock a distinctive spot appearance. Some large quartz grains are slightly elongated and appear in mosaic with an undulating extinction in thin section. Another characteristic of this rock is its alteration; it is affected by low and diffuse carbonatation causing hydrochloric acid effervescence, which is not the case for other plutons in the region. The carbonate type observed is calcite. The rock also shows propylitic alteration, moderate to high chlorite and sericite alteration, and mild epidotization. Locally, the replacement of biotite with chlorite is complete. The Île Bohier Pluton is also cut by potassic alteration veinlets, an alteration typical of the proximal zone of porphyry-type mineralization. Although difficult to see with the naked eye, 0.5% tourmaline can be observed on thin section. Thus, the rock is affected by carbonate-sericite-tourmaline alteration. Finally, the rock is slightly hematitised. 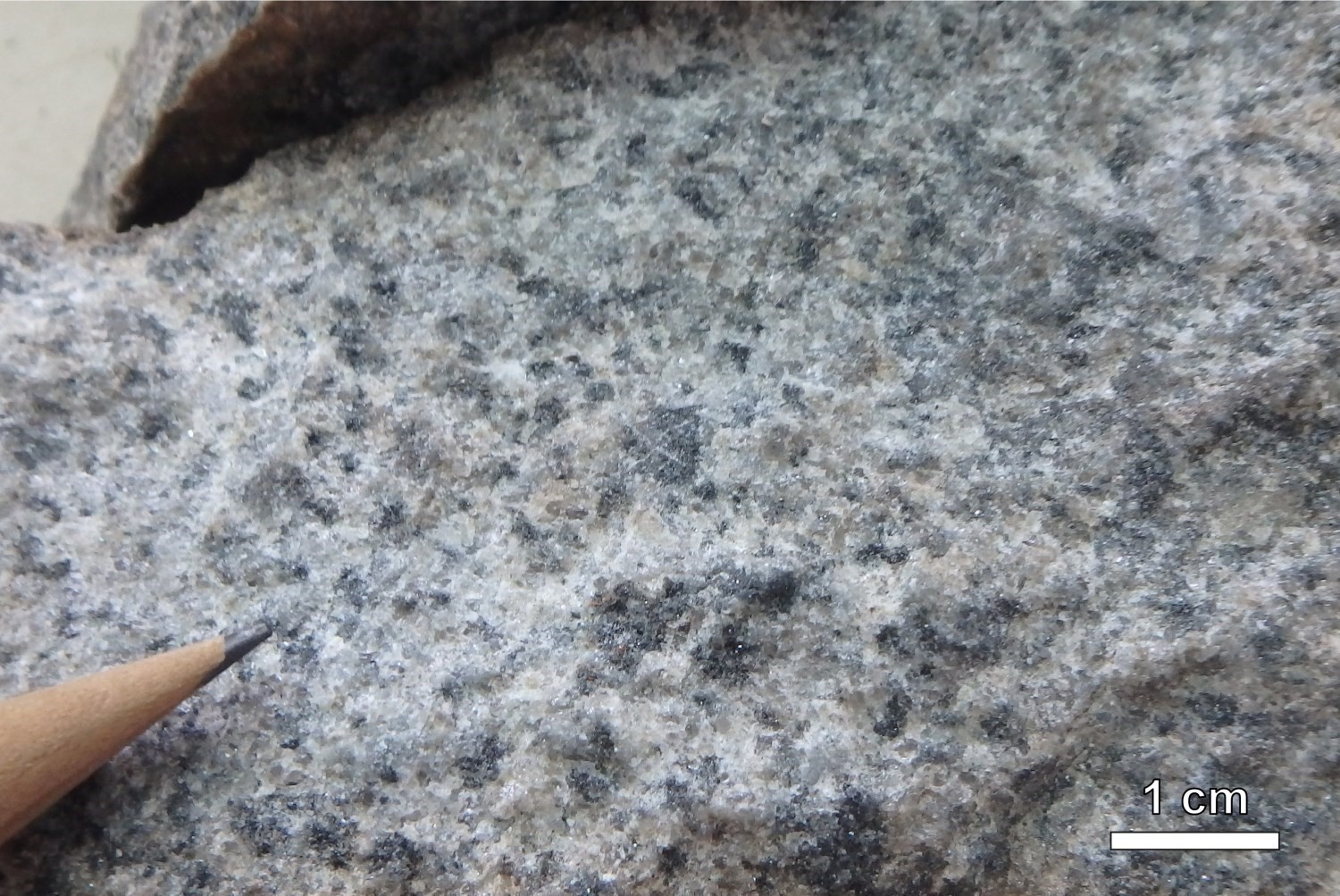 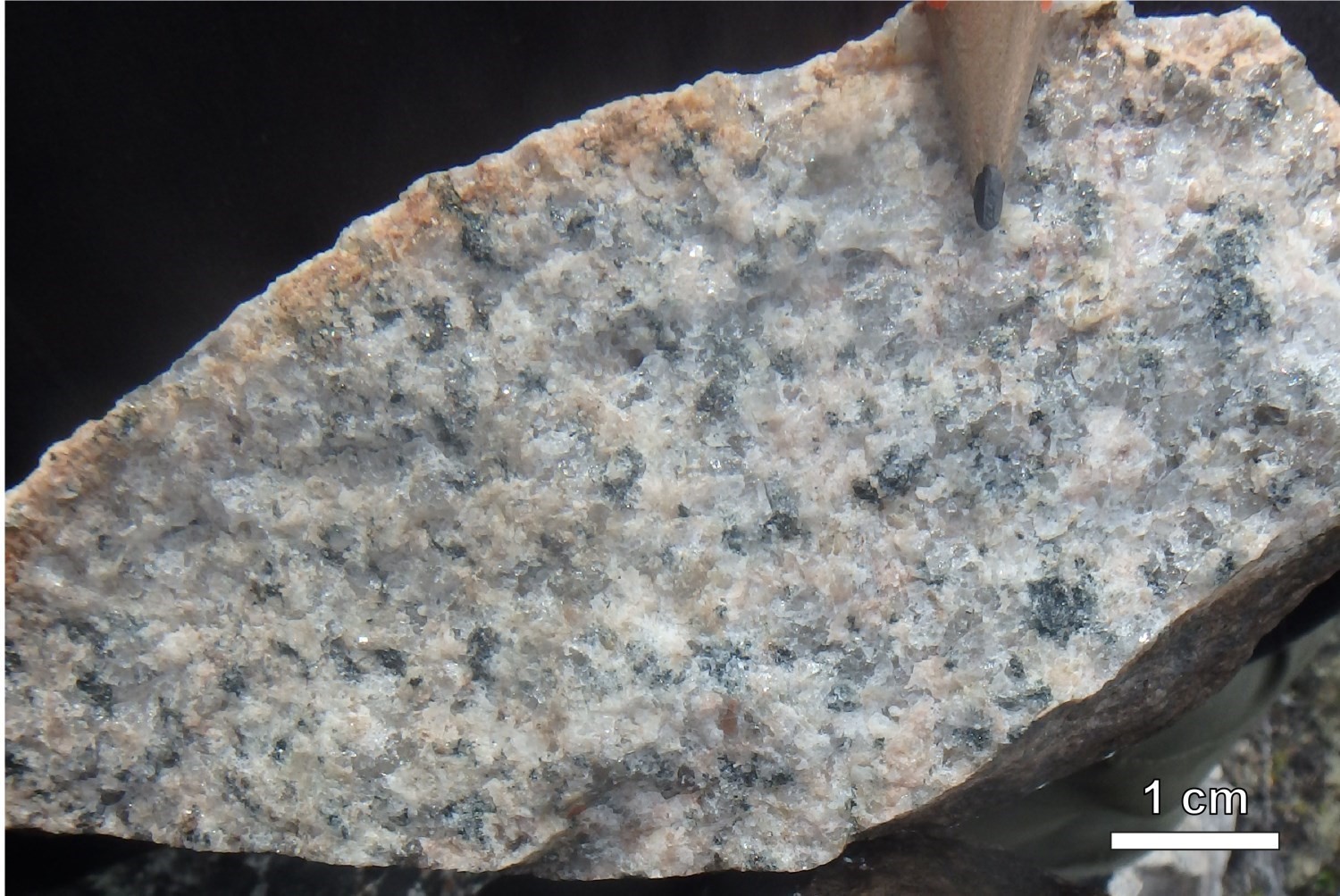 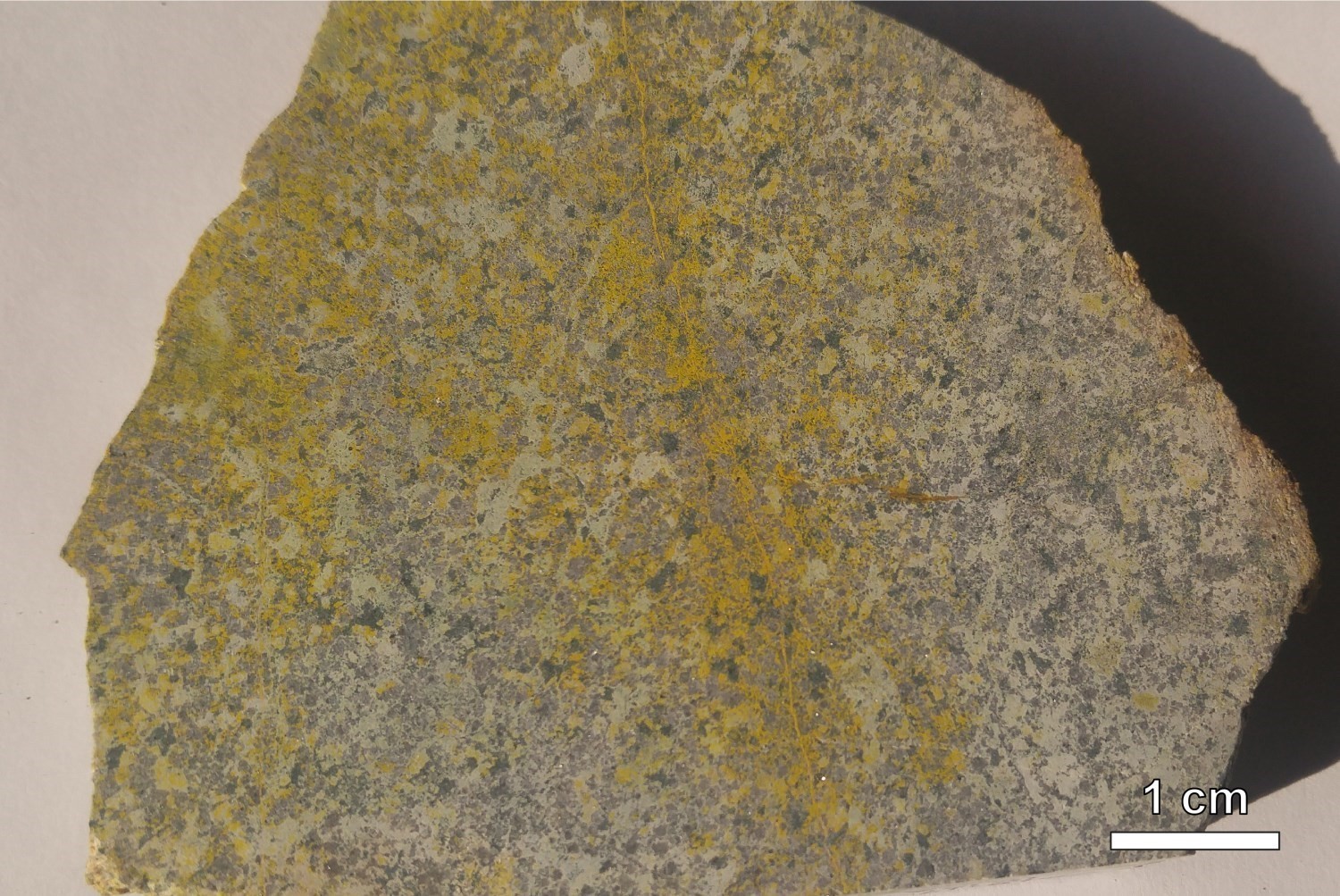 The main ferromagnesian minerals are biotite (2-10%), muscovite (up to 4%) and, locally, hornblende. These minerals form small clusters. Magnetite gives the rock a variable magnetic susceptibility depending on outcrops, ranging from weak to strong. Traces of pyrite and pyrrhotite are disseminated in rock or in veinlets.

From a geochemical perspective, the rock is of calc-alkaline affinity (Ross and Bédard, 2009). Type I, it is peraluminous to metaluminous (Maniar and Piccoli, 1989). In the diagram of Pearce et al. (1984), samples are located in the field of volcanic arc granites. Finally, the rare earth diagram normalized to CI chondrite (McDonough and Sun, 1995) shows a slight enrichment of light rare earth elements compared to heavy rare earth elements and a negative europium anomaly. 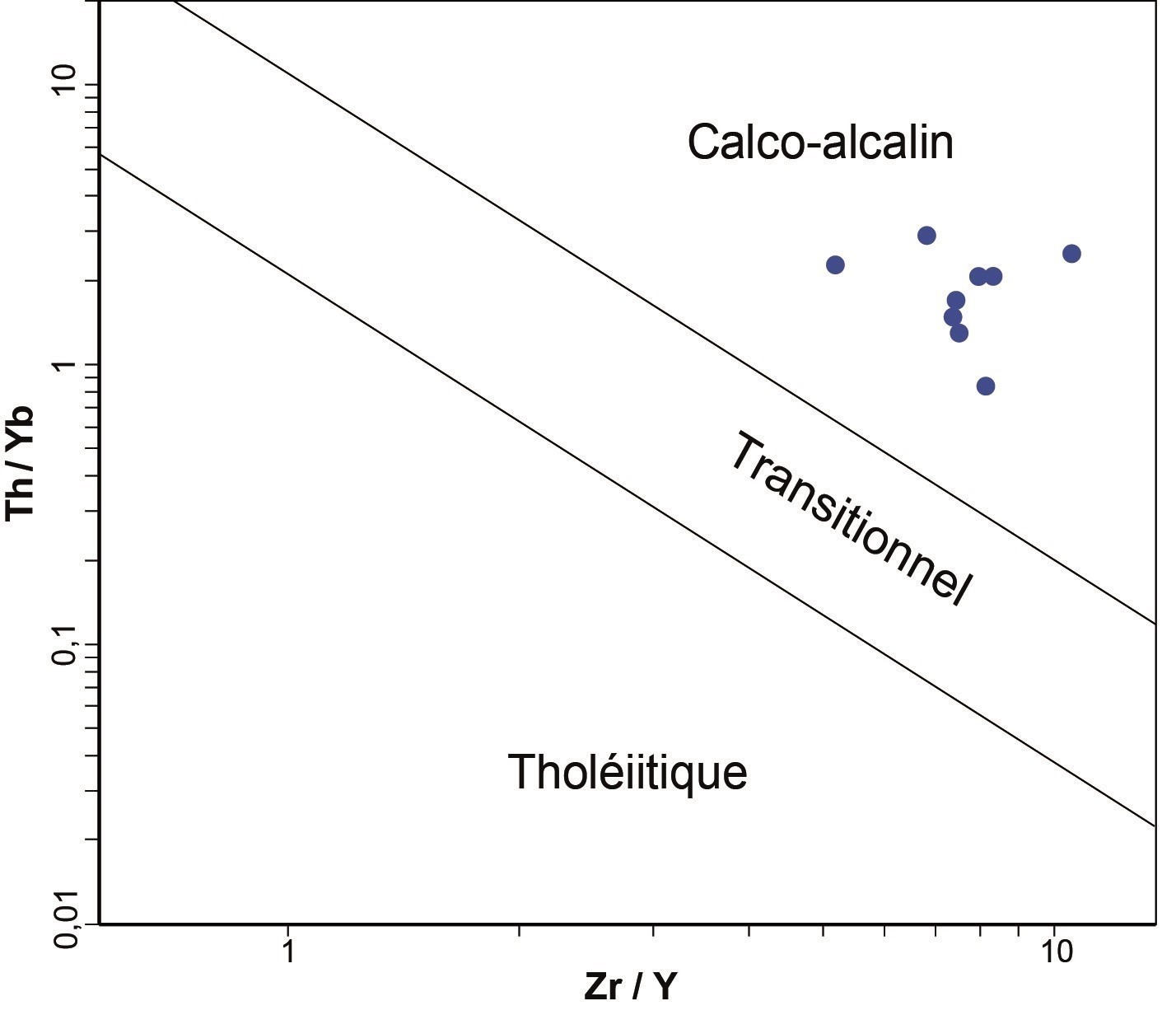 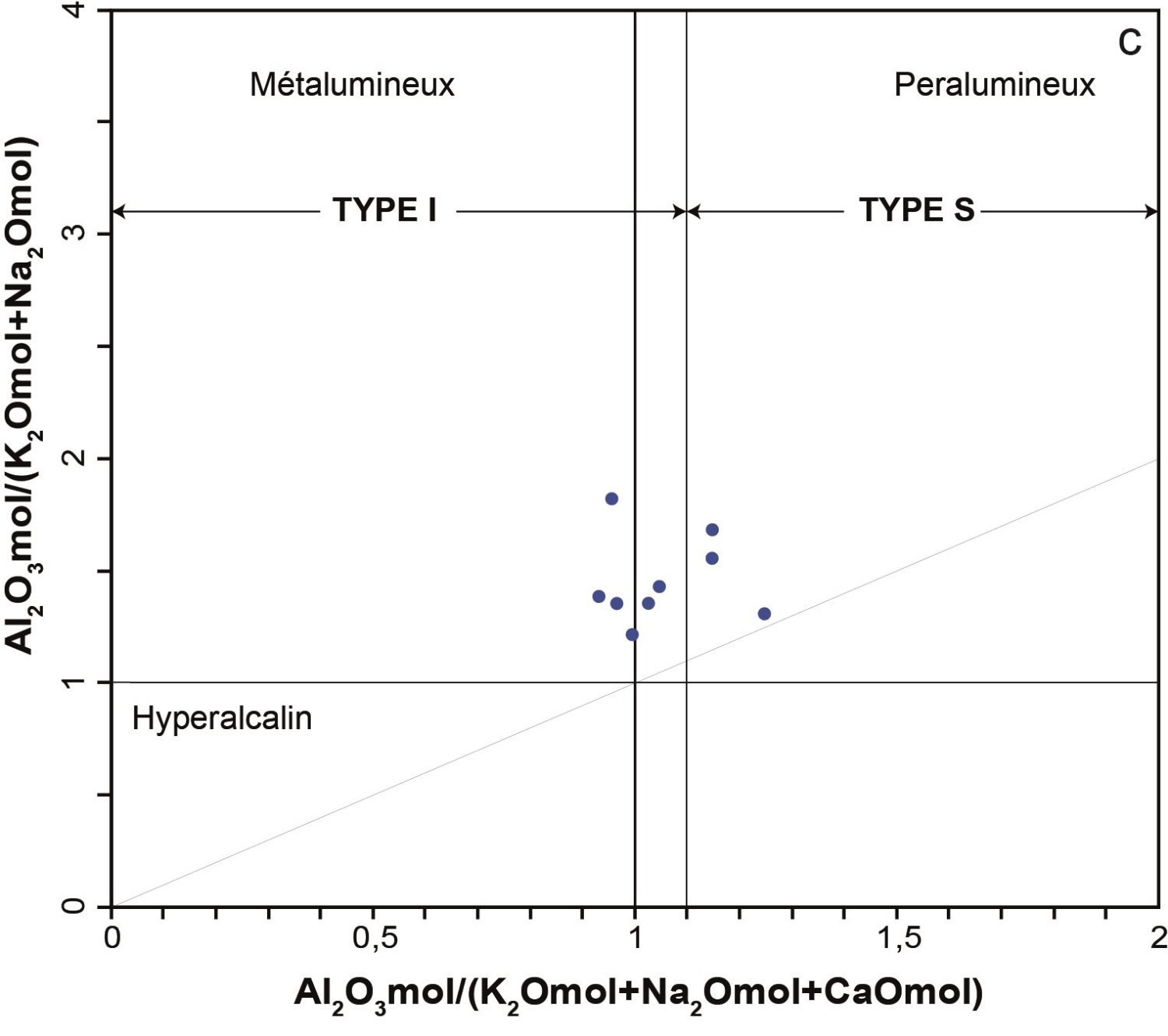 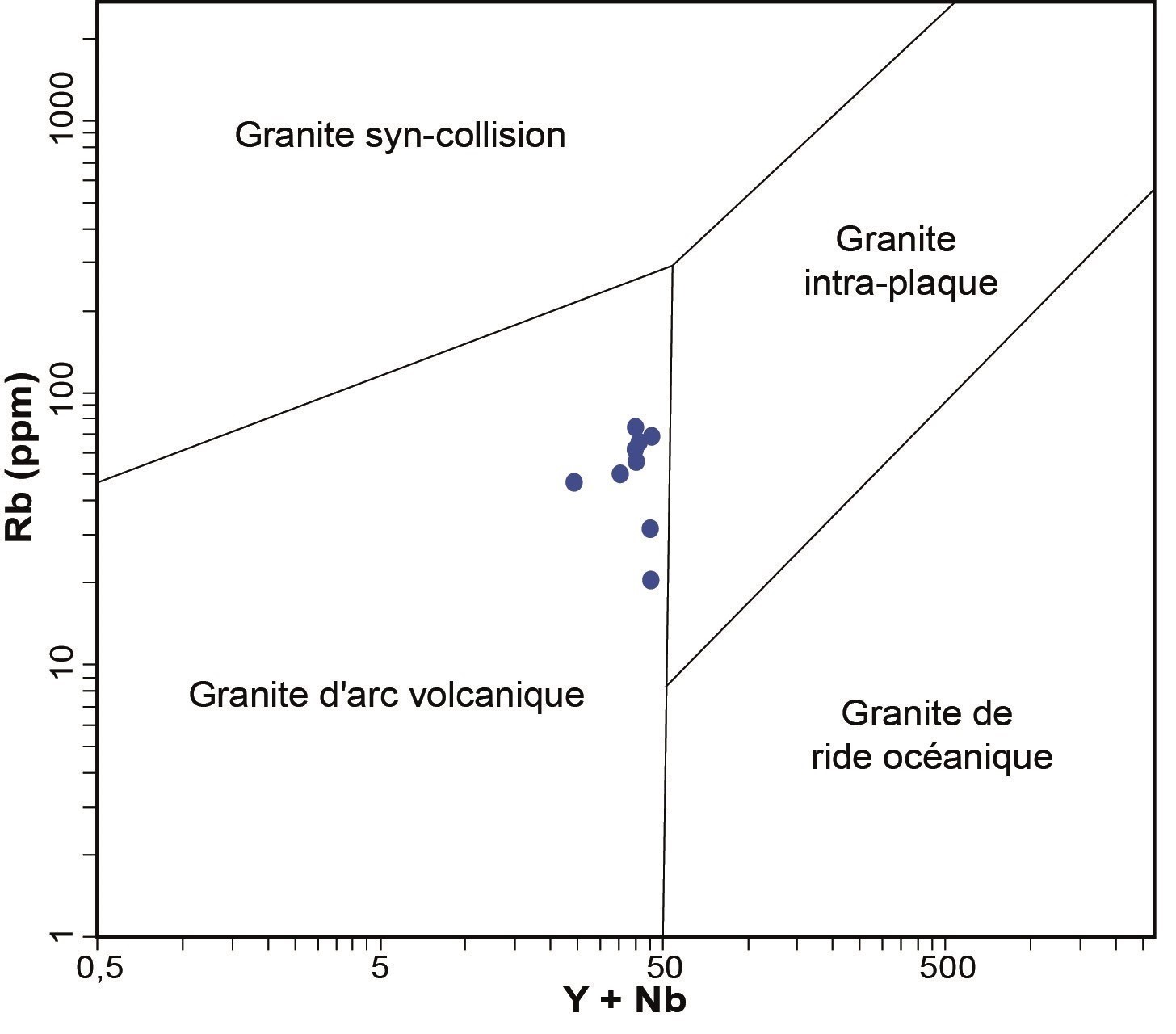 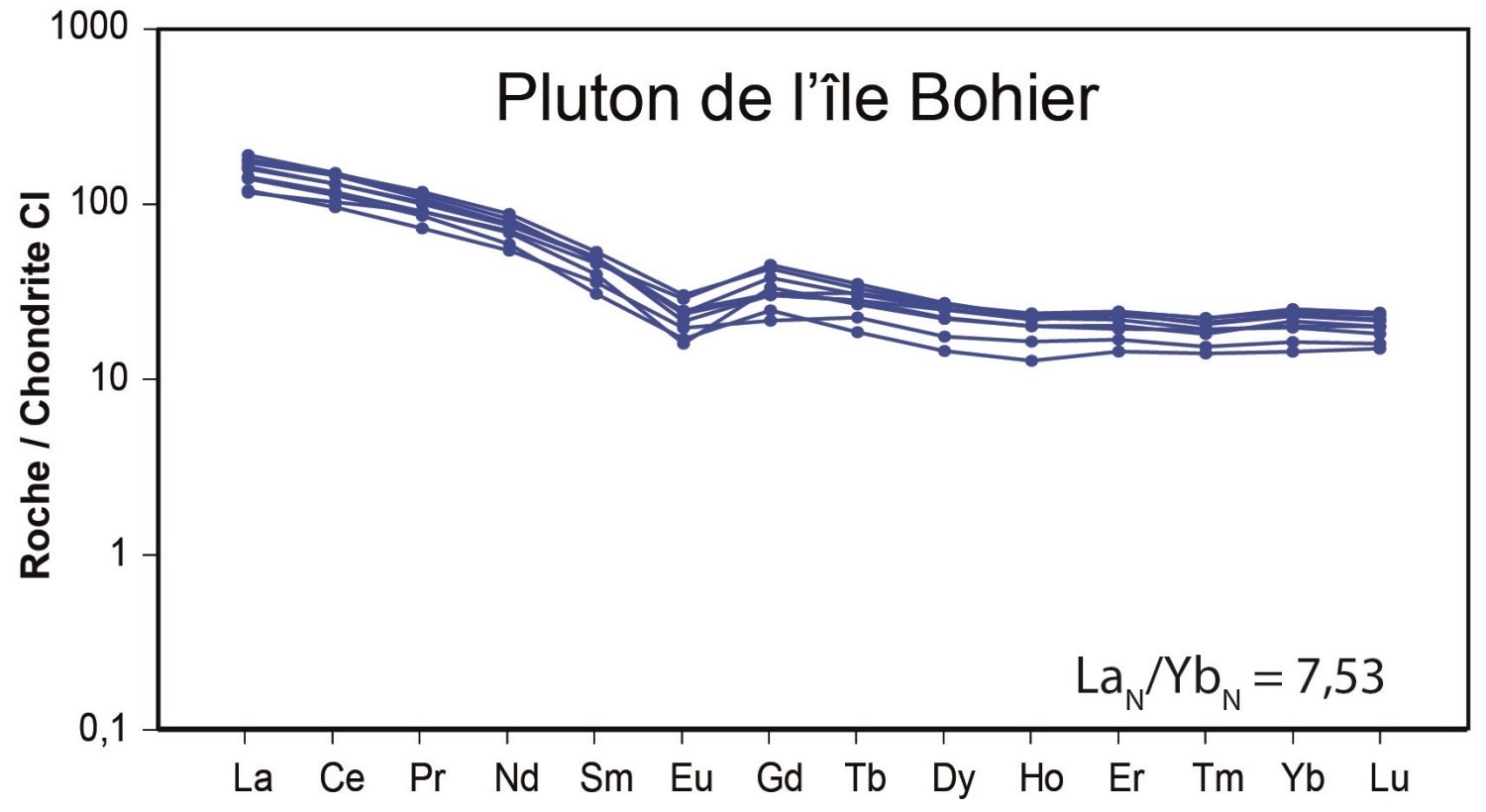 The Île Bohier Pluton is 14 km long by 8 km wide. It is located in NTS sheet 33A08, directly east and southeast of Bohier Island.